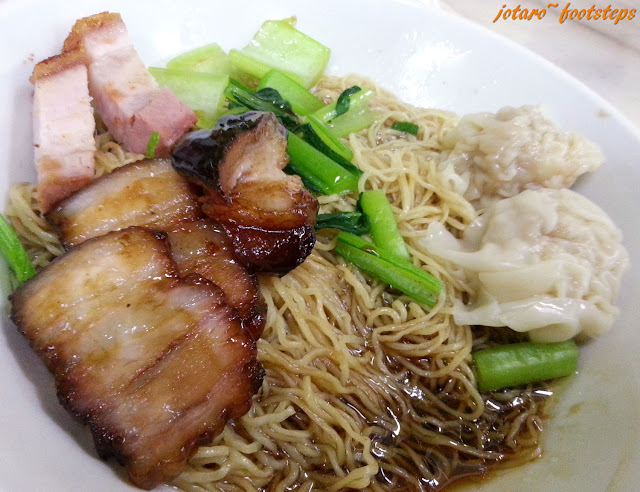 George Town, Penang, Malaysia - August 2016
What's all the hype these days about bamboo wantan noodles / bamboo wantan mee? Is it a better noodle? If it is, what makes it better?
Well, we were on a cycling trip up in Penang (... see cycling blog) when my friend Chew tried these noodles one evening at a place called Hong Kee, and raved about it. Curious, the rest of the gang went there the following day for lunch after exploring the heritage core of George Town.

But first let's see why it's called bamboo wantan noodles.
No, the noodles are not made from bamboo! They are as other wantan noodles made from wheat floor; the difference here is that the kneading of the dough is with a long bamboo pole. The dough placed on a counter is pressed down with the bamboo pole, turned over and pressed again. This process is repeated several times. Apparently, this way of kneading makes the noodles more springy for a good bitey experience; in Chinese this is called Q-Q. 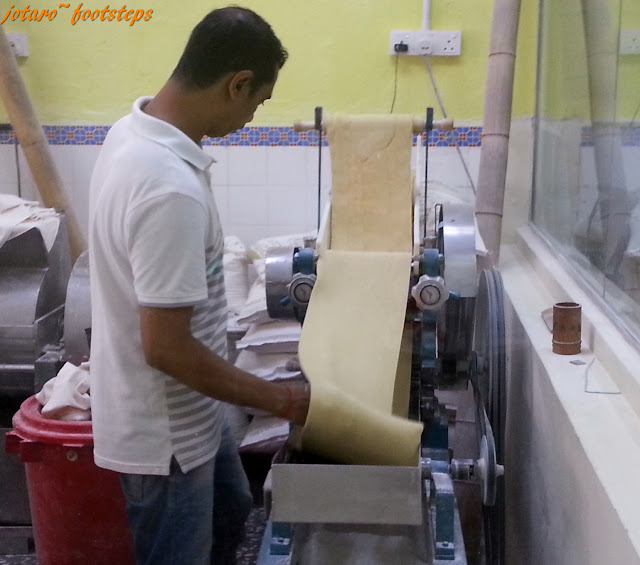 After the kneading, the dough is machine-rolled into flat sheets of the right thickness. The same machine cuts the the sheets into long, thin strips. The whole process at Hong Kee can be viewed as they make it at an enclosed glass section; they are proud to show their manufacturing style.
(... see a YouTube video on the making of bamboo noodles) 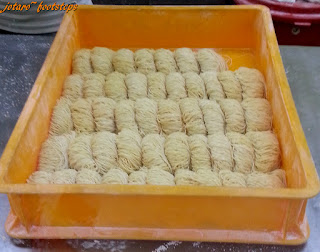 Another worker cut the long strips into appropriate length and bundle them in regular sizes ready for cooking. The thickness of the strips differ from stall to stall, Hong Kee's is of the thinner variety. 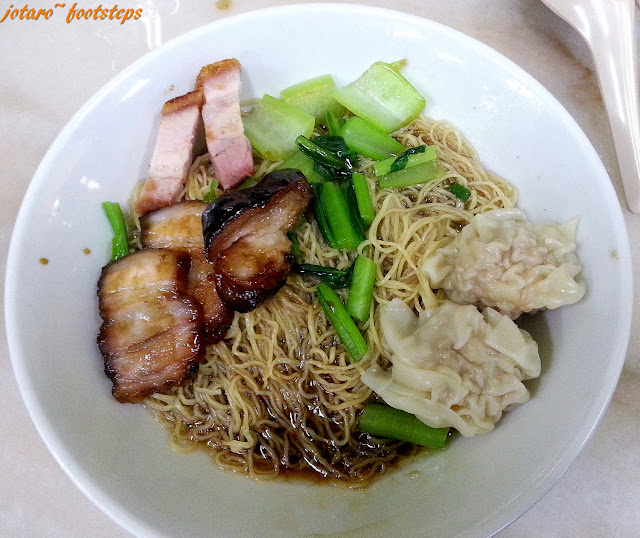 Okay, we have seen how they made it, let's see whether it stands up to all the hype.
We had ordered "kosong", meaning noodles that came just with the sauce and vegetables. The barbecued pork belly (Char Siu), roast pork (Siu Yuk) and wantan dumplings had been ordered separately so that we could add them to our own individual liking.
Hong Kee's wantan mee, unlike those from the Klang Valley, comes with a thin sauce/soup instead of the dark thick soy sauce. This sauce is a light puree and had a good underlying taste. And the noodles? Although thin, they were surprisingly Q-Q! It was very good wantan mee and I liked them very much and would recommend one not to miss this when up in George Town! 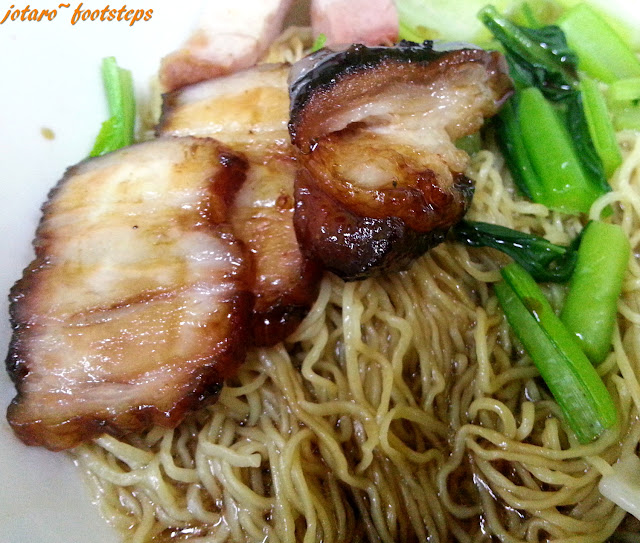 Let's have a look at the side dishes: 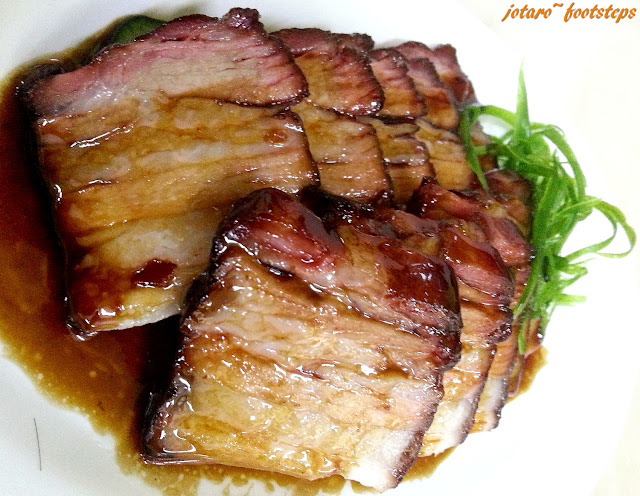 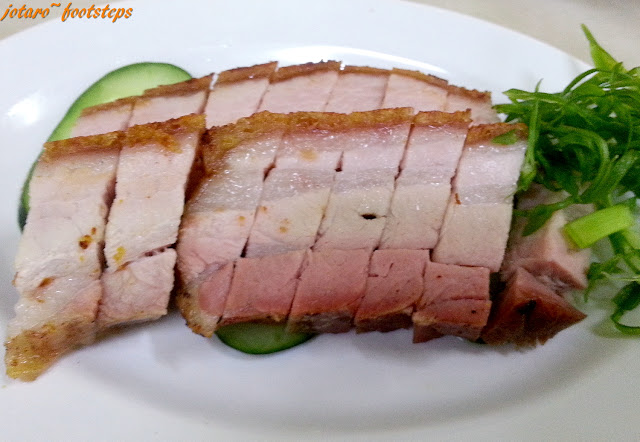 The Siu Yuk was very good too with crispy, crunchy skin. I would have like it with a bit more fat though. 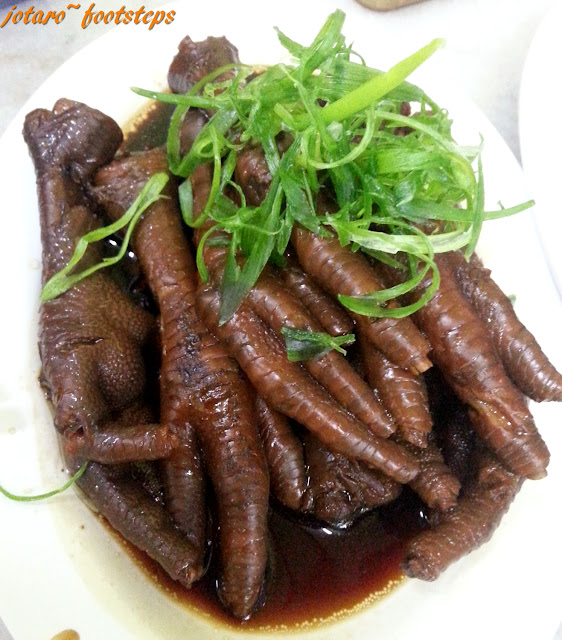 The Chicken Leg Stew was just that, chicken trotters stewed in soy sauce. Would have been better if they had pre-deep fried the legs first though. 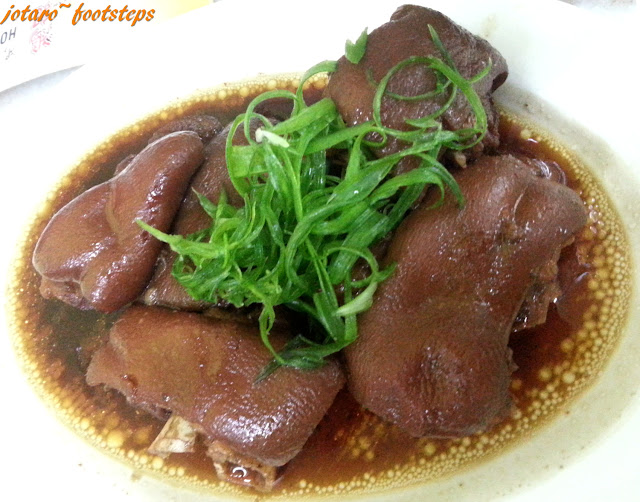 The Pork Trotter Stew was a lovely dish, nicely done with soft skin and tender meat that had soaked up the sauce well. 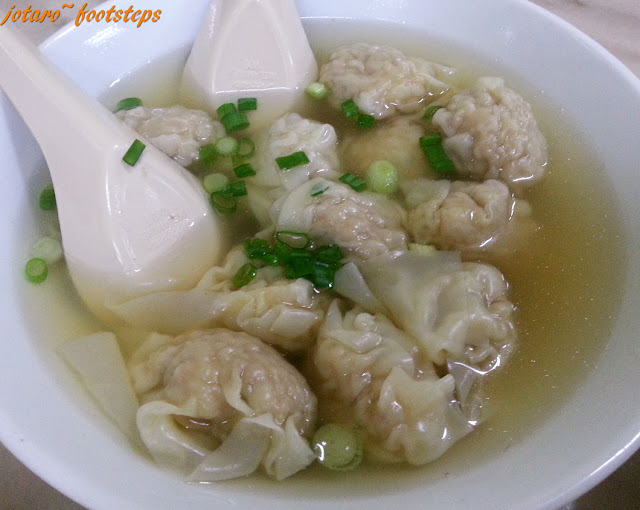 Our bowl of wantan soup. The soup was a light clear soup with larger sized wantan dumplings. 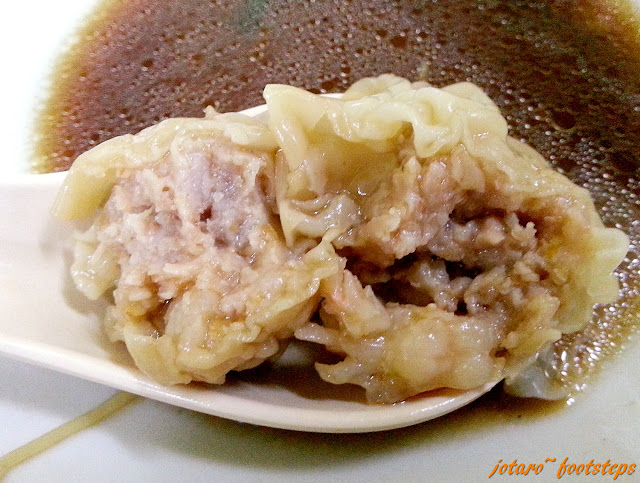 The meat wrapped inside the wantan skin was superb; the mincing was not too fine leaving small chunks of meat for a good bite which exuded the flavour of the meat. The meat is tasty, having been minced together with some salted fish. 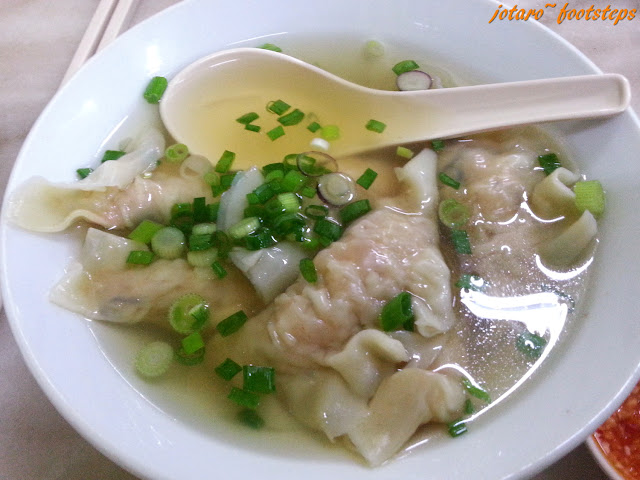 The Sui Kow was okay, just slightly above average in taste and texture. 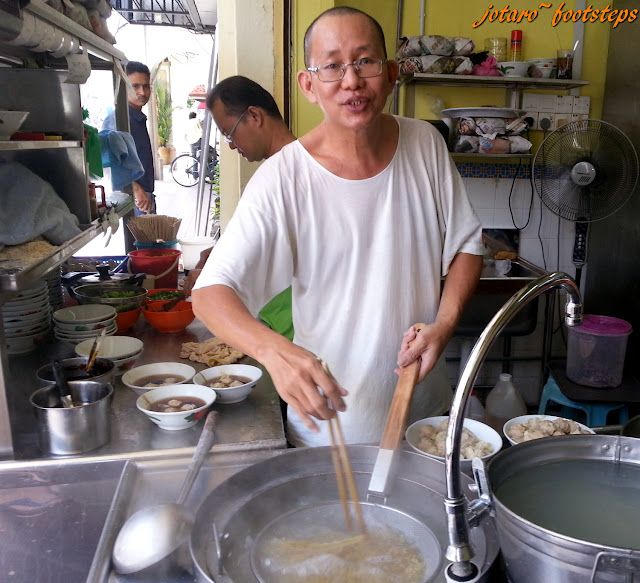 Okay let's have a look at the wantan mee "kitchen". It's a stall located right up at the entrance of the shop; Mr. Chang, the owner/operator, was quite chatty given me some insights on his business and techniques... sorry no sharing of that here, it's their trade secret! 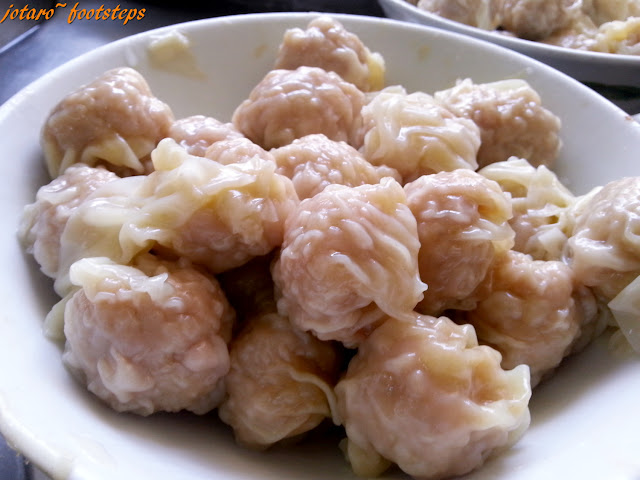 Boiled wantan dumplings just waiting to be served with soup. 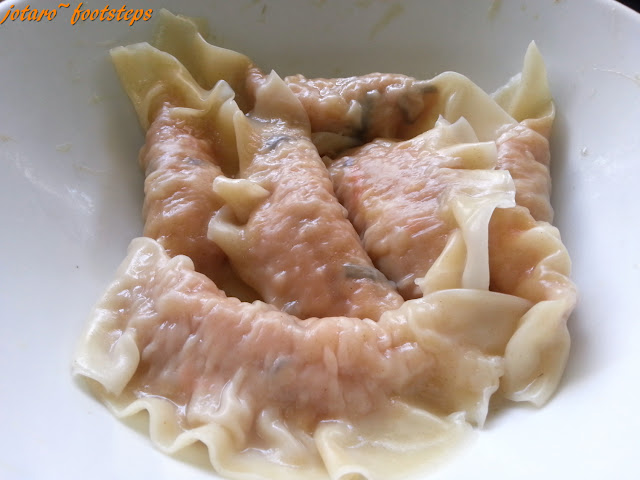 ... and here are the boiled Sui Kows. 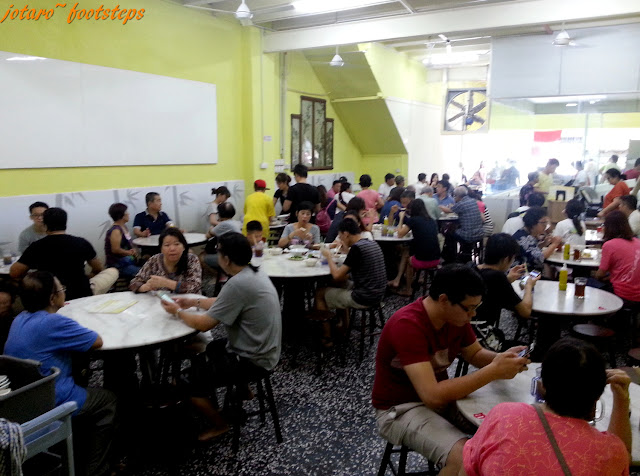 The shop is laid out coffee-shop style with round many round tables. The stall is upfront at the right and the enclosed noodle making section is behind it (can't be seen in this photo). It's not air-conditioned but large exhaust fans have done their job of venting the heat out. 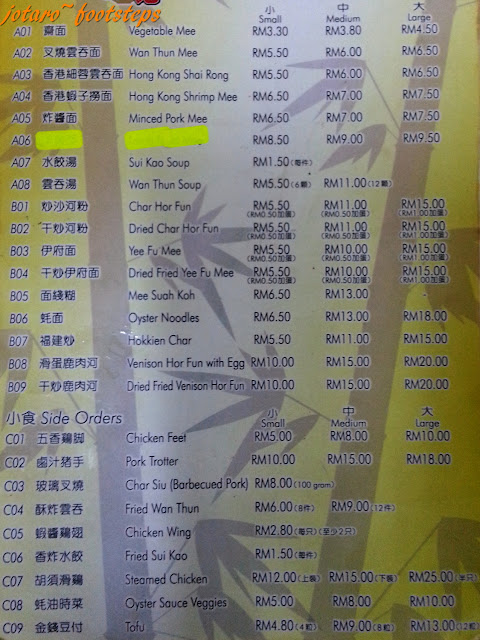 Hong Kee's food menu. Other than wantan mee, they also served the side orders AND also other noodle dishes like Oyster Noodles and Venison Hor Fun; okay I will have to try these the next time. 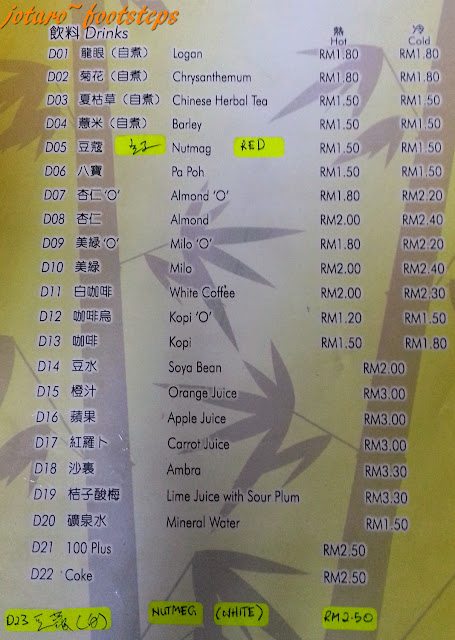 Their drinks menu. Other than the regular, they also serve Pat Poh (a herbal drink, favourite among the locals), Ambra With Sour Plum (another local favourite) and also Nutmeg Juice (which I think are not the fresh nutmbeg juice like those at Balik Pulau, but from bottled syrup).

You are at - Jotaro's Blog / Footsteps / YummY! / Chinese Food / Noodles / Bamboo Wantan Noodles @ Hong Kee Penang
If you like this, view my other blogs at Jotaro's Blog
(comments most welcomed below. if you like this pls share via Facebook or Twitter)
Posted by Jotaro Zen at 9:56 PM