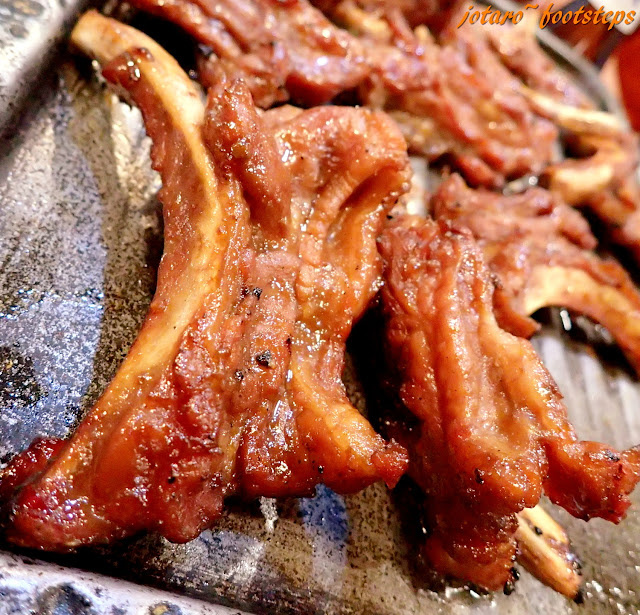 Insadong, Jongno-gu, Seoul, South Korea - June 2016
We were on a cycling tour of South Korea, and was doing some Seoul Searching and while exploring Insadong, we chance upon this place called Gojipbultong. It serves barbecued pork ribs among other thing. 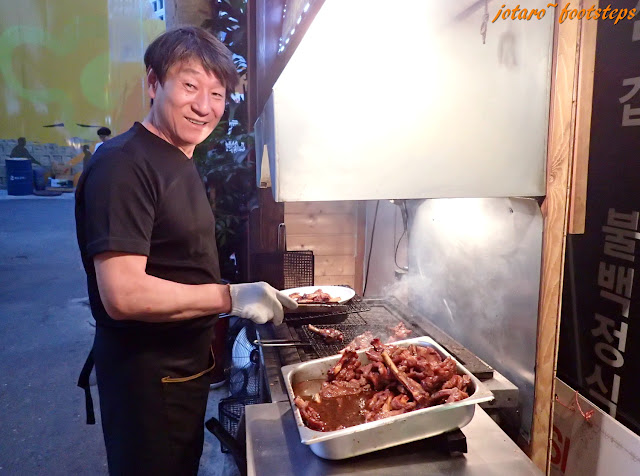 While negotiating the narrow streets and alleys of the locality, we saw this guy outside the restaurant grilling pork ribs! He was doing some light pre-barbecuing of the ribs. Hmmm.... this looks interesting and it's dinner time, let's GO IN! 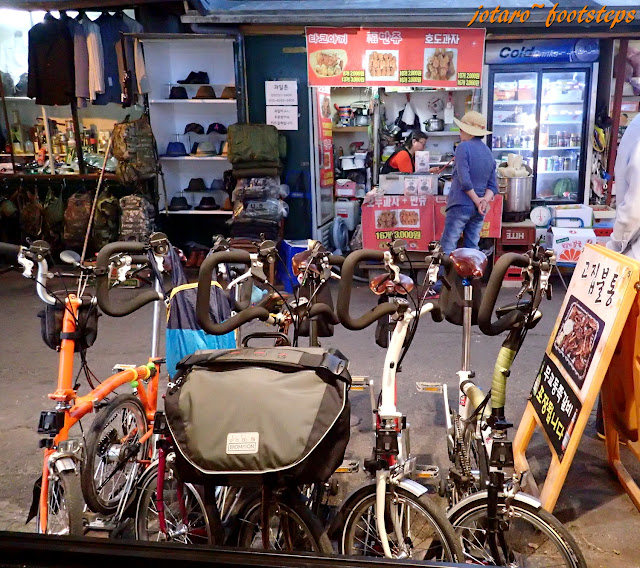 The shop is not that difficult to locate, it's near the Jonggak train station, from there walk toward Pizza Hut at the junction of Jongo-ro and Jongo-ro 9-gil. Turn into Jongo-ro 9-gil and walk about a hundred metres down the road and the shop is there. Opposite are small stalls that are built below a fly-over.
Here, the streets are narrow and locals are busy in their daily hustle and bustle, many heading for the stations, others curiously exploring Insadong (that's us!). 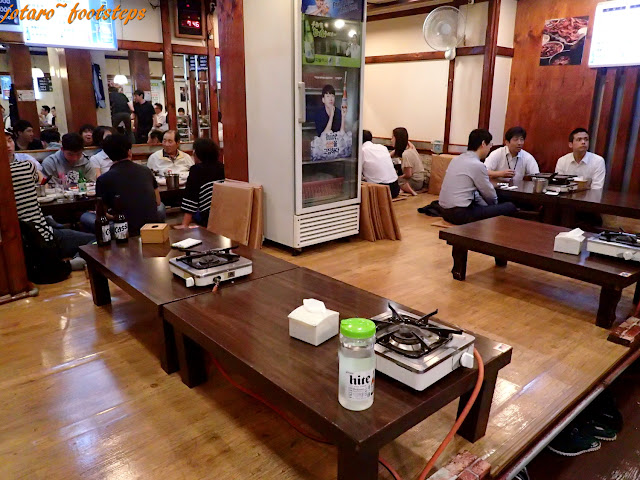 Inside, it's quiet and serene and patrons chatted among themselves quietly while slowly grilling and eating their food. Seating was traditional style on pine wood floors and eating were from low tables. 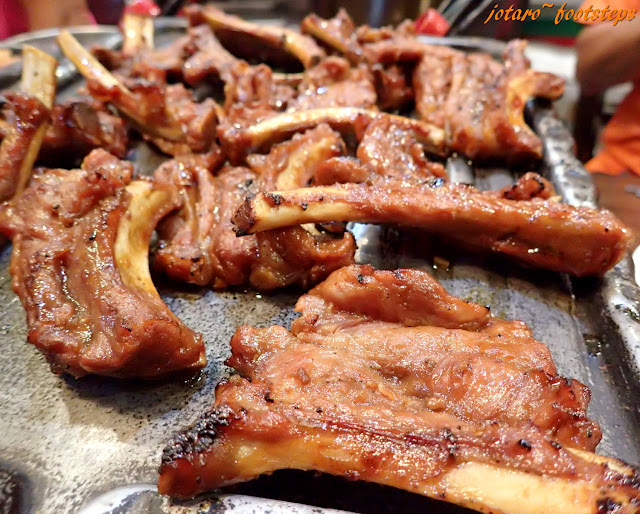 Service is fast and soon the pork ribs are brought in. These are short ribs that had been lightly pre-barbecued outside (remember the guy outside?). Patrons only had to further grille it for a short while and.... Waalaa! It's ready!
The ribs had been seasoned with soy sauce and some other secret ingredients (my taste buds just could not discern what). The seasoning was light, just enough to impart their tinge of flavour and not mask the good, succulent essence of the ribs themselves.
!YummY! 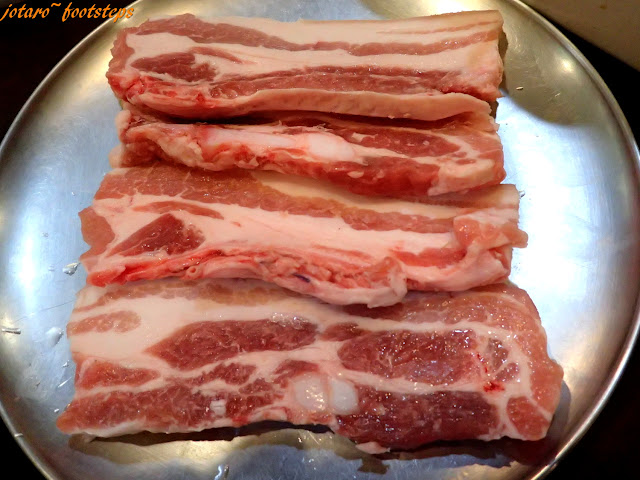 Next came some pork belly, well marbled (really! ... look at above photo), fresh and slightly chilled. 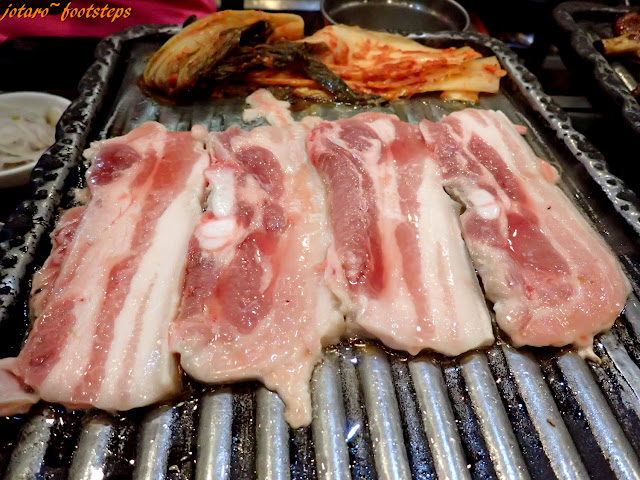 And.... onto the hot plate they went, slowly simmering. At one end were some large pieces of Kimchi, their juices slowly running down the grooves to add their flavour to the cooking. 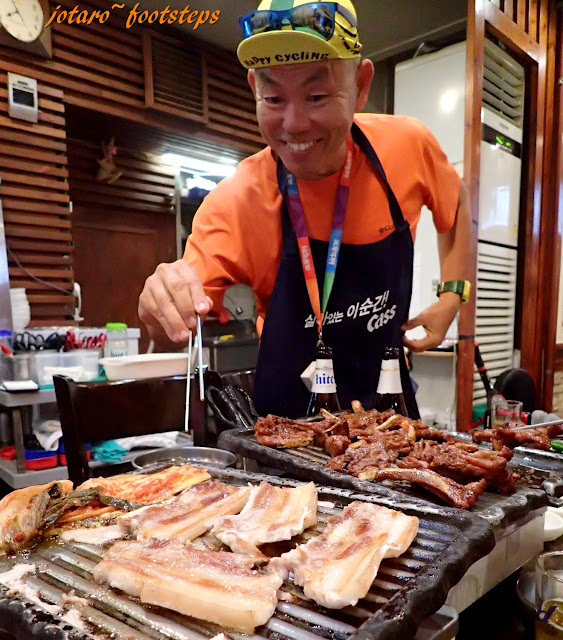 Patrons can cook the meat themselves, aprons are provide for all patrons to keep their clothes clean. Sin here doing a wonderful job of barbecueing! 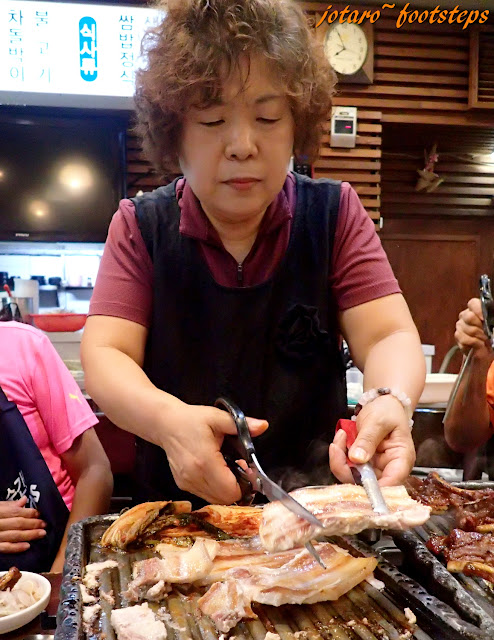 But soon one of the ajummas took over, looks like our own cooking was not skillful enough. She slowly grilled the large slices of pork belly and then scissor cut them into smaller pieces and did further cooking. 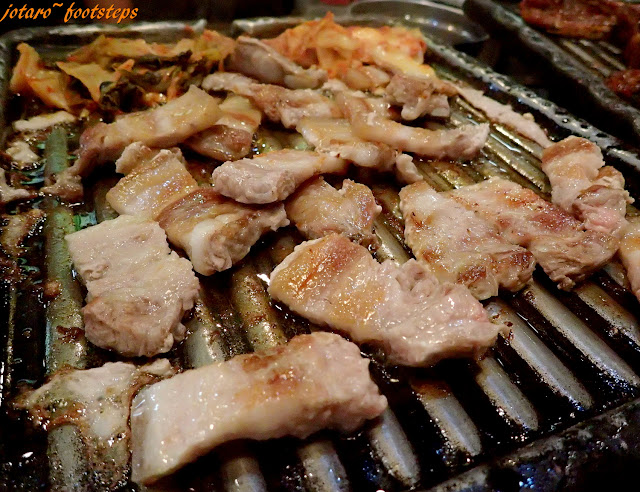 Slowly, the pork belly danced on the hot plate, oozing out oil and exuding a good aroma.
It's ready.... LET'S EAT! 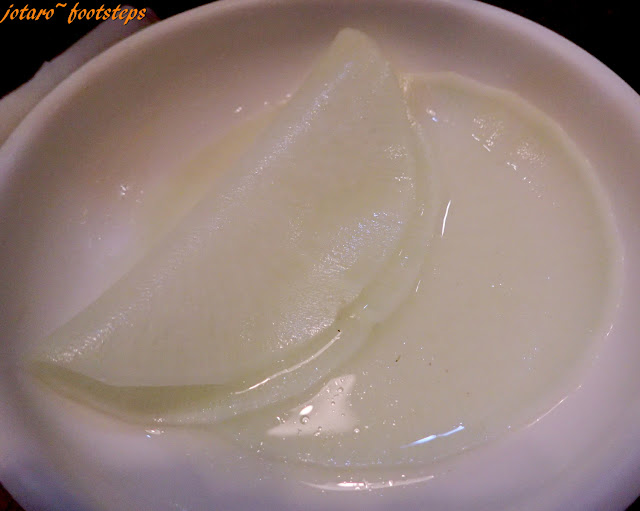 Each of us were given a small deep saucer to individually eat from. At the bottom were two thin slices of radish soaking in fruit vinegar. 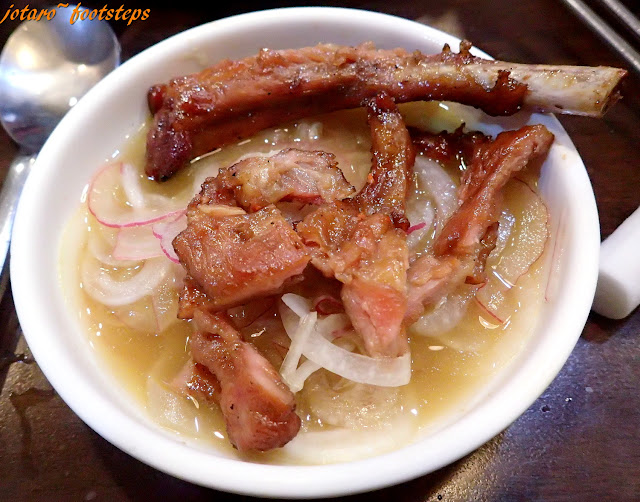 Thin slices of fresh onions were given for us to add in together with more fruit vinegar, and the meat were placed on top. We slowly dipped or stirred the meat in. The slightly sourish fruit vinegar complements the meat well, adding their sweet-sour taste to the overall flavour. 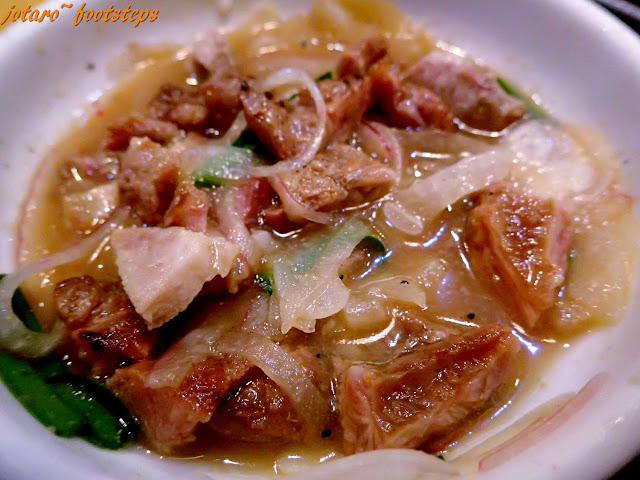 Now, the odd thing is the vinegar has also quickly pickled the thin onions, removing their pungent taste. It was all together a very good combo and I kept adding in more onions; sans the pungentness, I just loved them. And the odd thing is, even though I ate lots of the onions,  I did not have any gassy problems later on, I guess the fruit vinegar took care of that too. 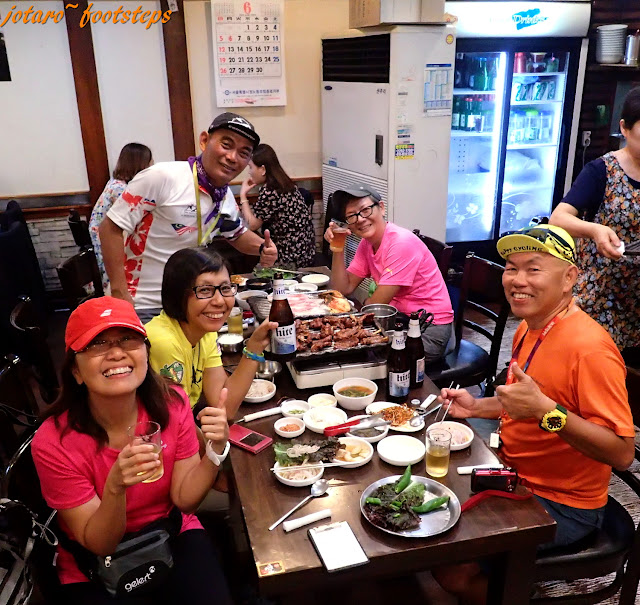 It was a very good meal, one that also came with some Kimchi, soup and rice. Here we are all smile, finishing off the meal with some good Korean Hite beer.
"Geonbae!"
(That's cheers in Korean) 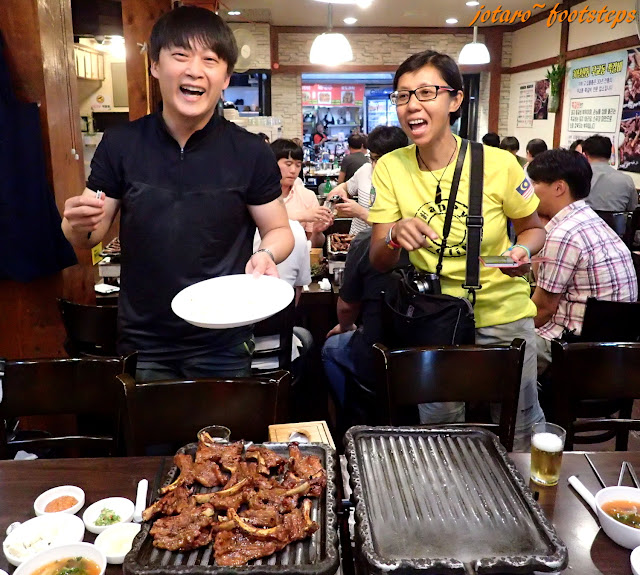 Here's Anne with Rain. He's the co-owner & operator of Gojipbutong, and he was the one who invited in to his shop as we lingered outside while trying to decide whether to enter or not. "You won't regret.", he said. And we surely did not as it was the best food in Seoul.
He's a handsome fellow almost as handsome as the famous Korean singer Rain. 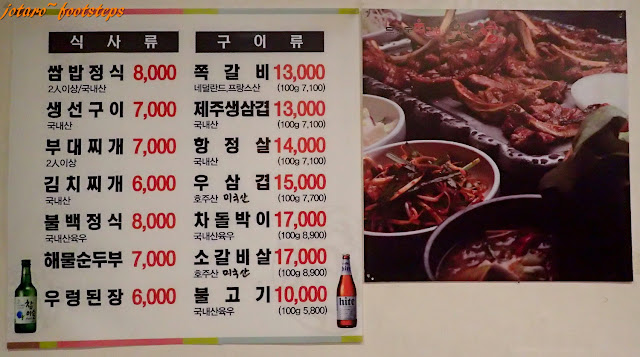 Here's the menu that list down some pricing of the meat, I am not sure as it's in Korean. Fortunately Rain spoke very good English. 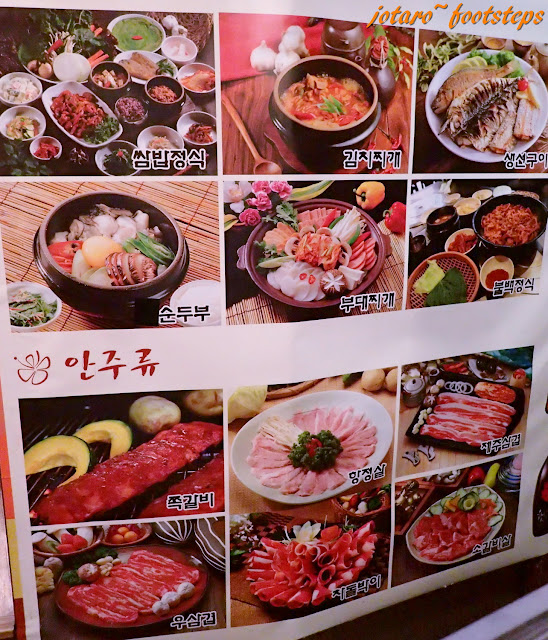 And here's a wall poster showing their sets and other dishes.
Bon apetit!


You are at - Jotaro's Blog / FootSteps / YummY! / Korea 2016 - Korean Food / Korean BBQ Pork Ribs @ Gojipbultong Restaurant Insadong Seoul
If you like this, view my other blogs at Jotaro's Blog
(comments most welcomed. if you like this pls share via facebook or twitter)
Posted by Jotaro Zen at 12:43 AM