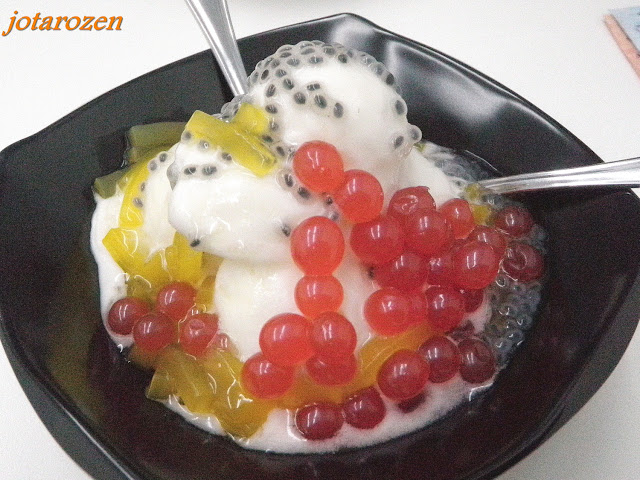 Is this coconut ice-cream? No, not in the sense that coconut shavings has been added to milk ice-cream. It's truly a coconut ice-cream; using coconut cream (the locals call coconut cream Santan) instead of milk to make the ice-cream.
(UPDATE 22ND JUNE 2013 - This place has closed down. Nevertheless, I do hope that something along it's line serving good santan ice-cream will crop up soon) 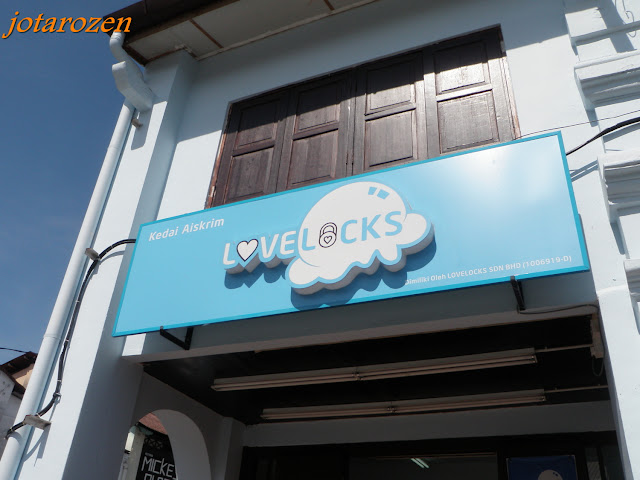 And it can be found at Love Locks, a unique ice-cream deli in Chulia Street, George Town, Penang  Malaysia. Like many new businesses located in the UNESCO Heritage Core Zone of George Town, the owners had refurbished an old pre-war shop-house. The place though looking new have that good old feeling about it. 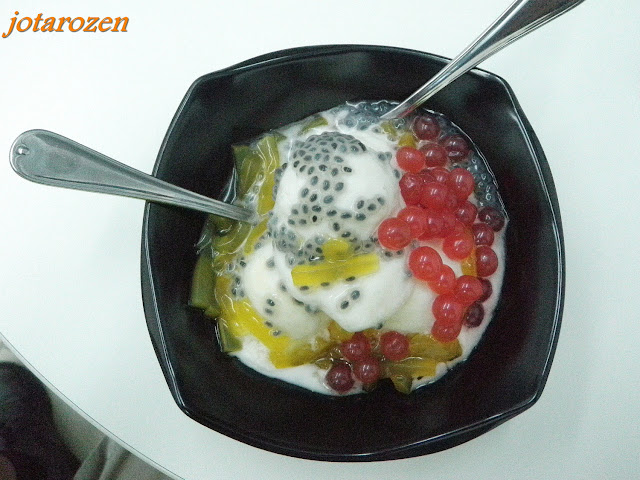 So what's so special about Santan ice-cream?
Is it healthier on account that it uses Santan?
Many new age health fans have been touting the good healthy aspects of coconut; from lowering cholesterol to high contents of anti-oxidants and vitamins.
I can't say myself, so leave that to the health experts.

But how does it taste?
Is it better than milk ice-cream? We will come to that later. 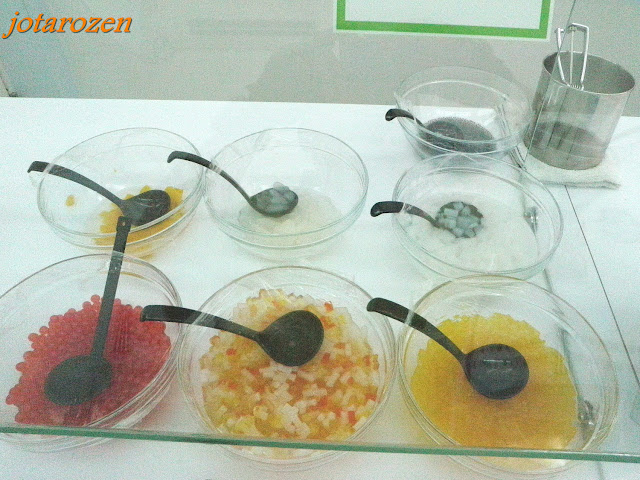 What makes this ice-cream interesting is the range of fresh toppings that comes with it.
These range from strawberry red globules that pops nicely when bitten into, letting the strawberry flavor ooze in together with the ice-cream.
To Chia Seeds for those seeking even more health benefits.
To cubes of sea-coconut, sago pearls, etc. 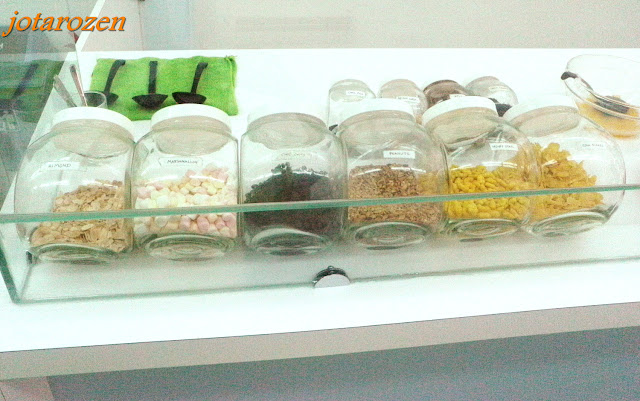 And then there are the dried toppings - marshmallows, ground nuts, pine seeds, etc. 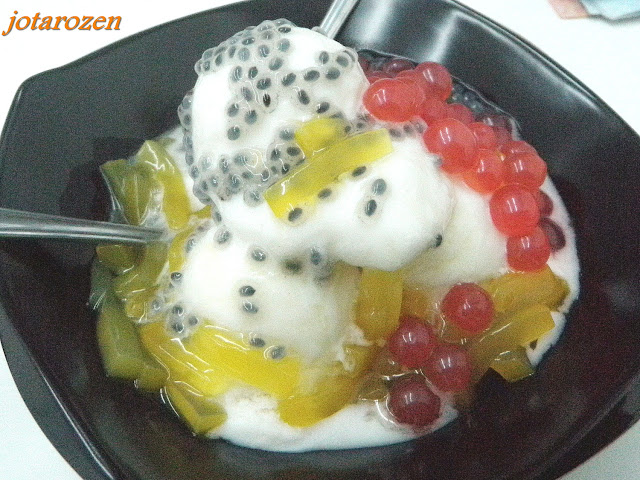 I went for the combo of 4 scoops with three toppings - Strawberry globules, Chai seeds & Lemon Jelly strips.
So how does it fare? 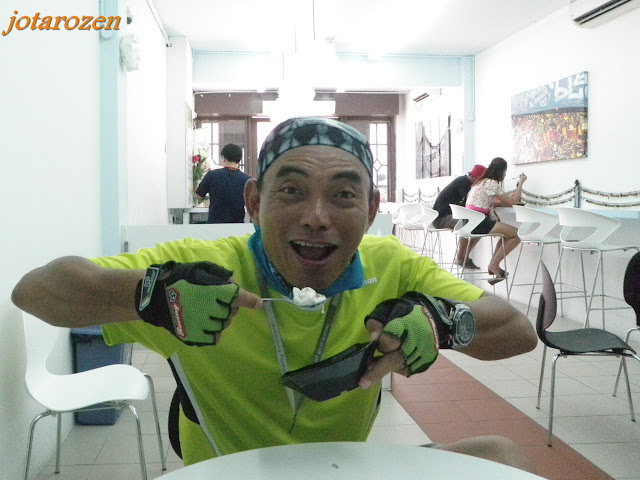 The ice-cream itself is very smooth and adequately thick. The aroma and creaminess of the santan are very much distinct from that of milk. It has that special coconut smell and taste without being over-bearing (those ice-cream using toasted coconut shavings have that over-bearingness). 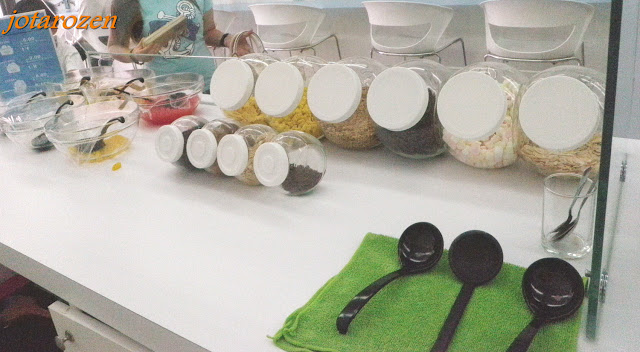 The toppings are the things that make it interesting and unique.
Other than that, I must add that I have tasted better Santan Ice-cream - this one would have done better if the coconut aroma & flavor is slightly stronger.
Still, I definitely like it better than the milk ice-creams. 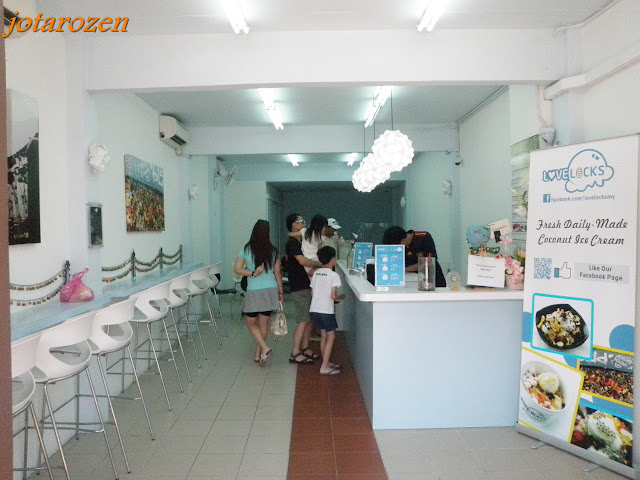 The interior is spartan but looks hygienically clean.
Counter-type cozy seating is provided opposite the serving counter and cozy table seating at the back. 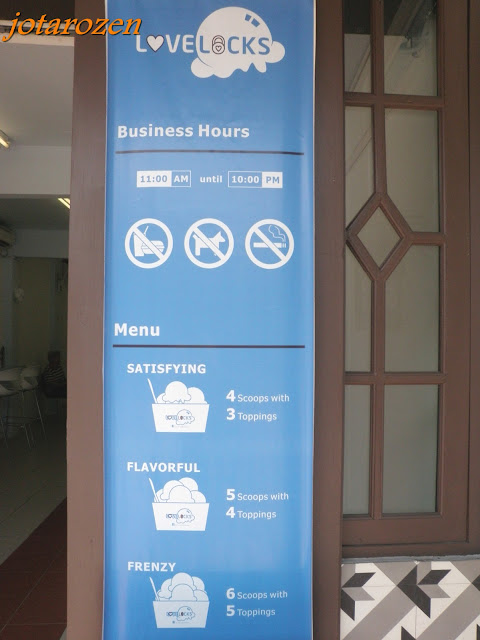 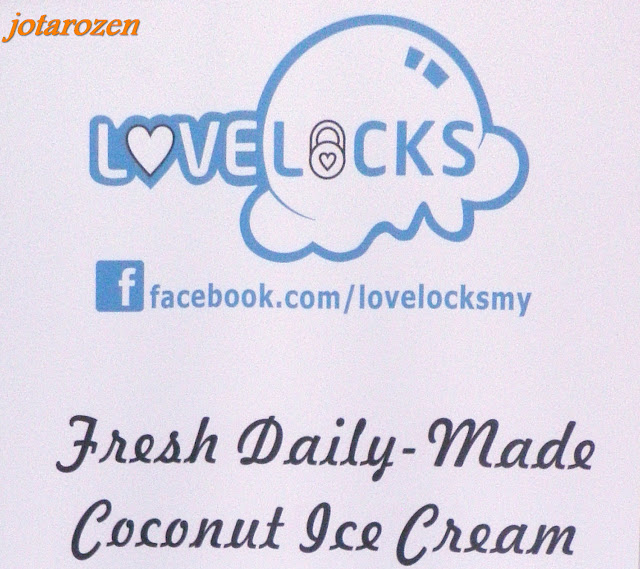 You are at - Jotaro's Blog  / FootSteps / YummY! / Desserts & Drinks / Coconut Ice-Cream, Love Locks, Penang
If you like this, view my other blogs at Jotaro's Blog
(comments most welcomed. if you like this pls share via facebook or twitter)
Posted by Jotaro Zen at 10:24 PM No comments:

Reviews of Desserts & Drinks. Click on relevant titles to view

Posted by Jotaro Zen at 6:56 PM No comments: 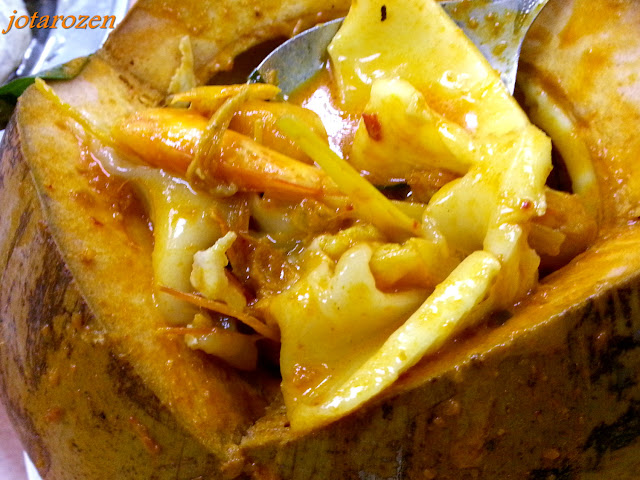 It was Christmas of 2012, and one would have thought that a good place to celebrate would be a Western food joint. 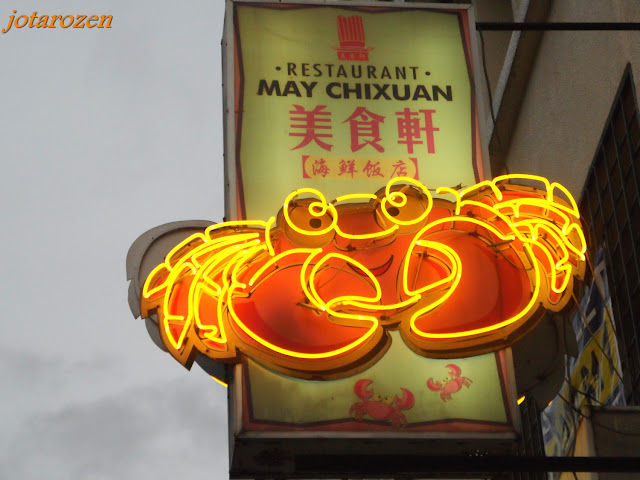 But no, we went to May Chixuan, a seafood reasturant whose specialty is crabs. The only thing is we did not have were crabs!
Even their shop signage is a bright, happy looking crab.

Me & Lynn already had a Western Christmas Lunch with friends (see Xmas Lunch @ La Delicias). My brother Lucas who was hosting the dinner was kind enough to bring us here for a change.
Thank goodness! 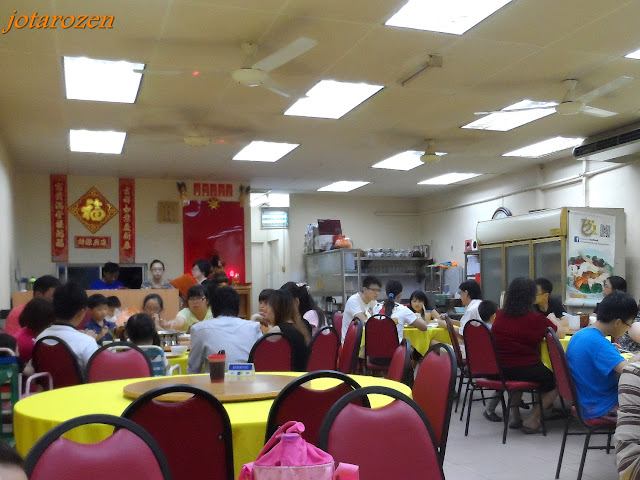 Located in Damansara Perdana, the restaurant is a simple air-conditioned place occupying a single shop-house.
There were ten of us, my brother Lucas who had eaten here before ordered. 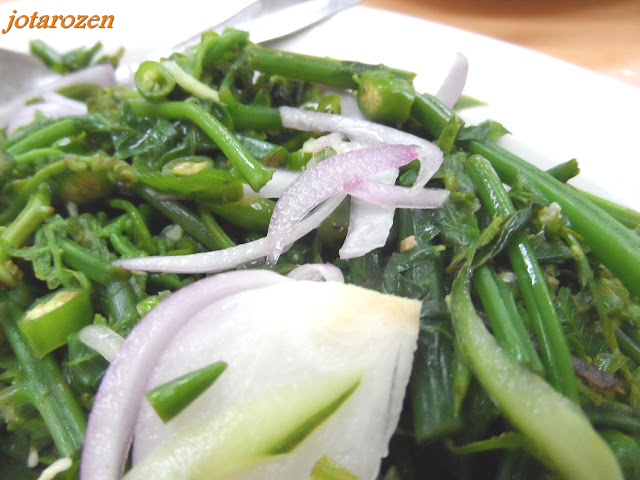 The first dish that came was the Paku Kerabu, a nice rhyming sounding name.
The kerabu vegetable was nicely seasoned in vinegar and garnished with slices of large onions & green chili.
This is the first time I am tasting kerabu made with Paku. The Paku has been slightly blenched first and so was not to hard to bite into. 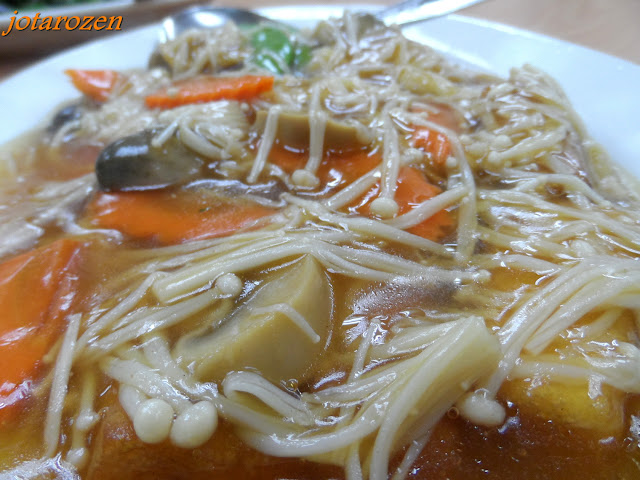 The Sing Kong Tofu that came next was more for the children, but we adults enjoyed it too. Slightly different from those of other places, it uses Japanese round tofu with lots of straw mushrooms. 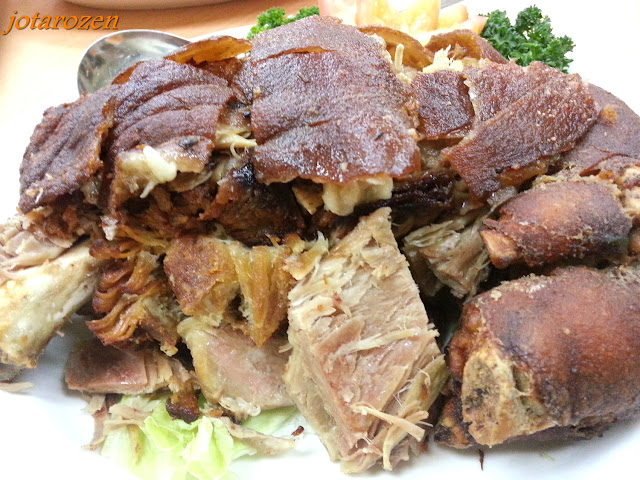 The Deep Fried Pig Trotters that they serve here is marvelous. The meat was still slightly juicy and soft. 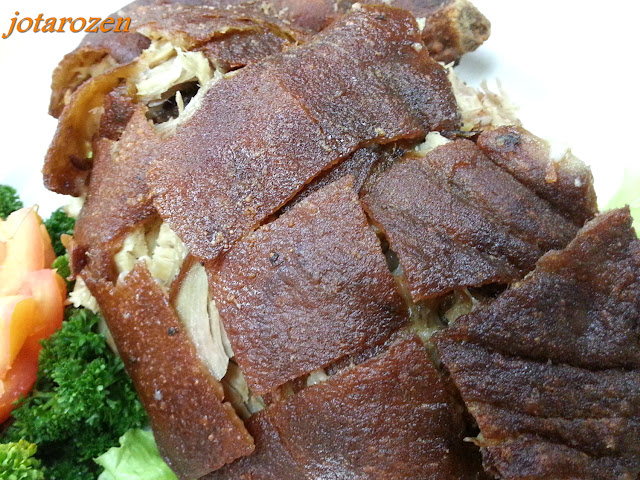 The skin was crispy but not to the point of being crunchy hard making eat easily bite-able. They must have somehow boiled the skin first to get it soft.
With every bite I relished it even more. 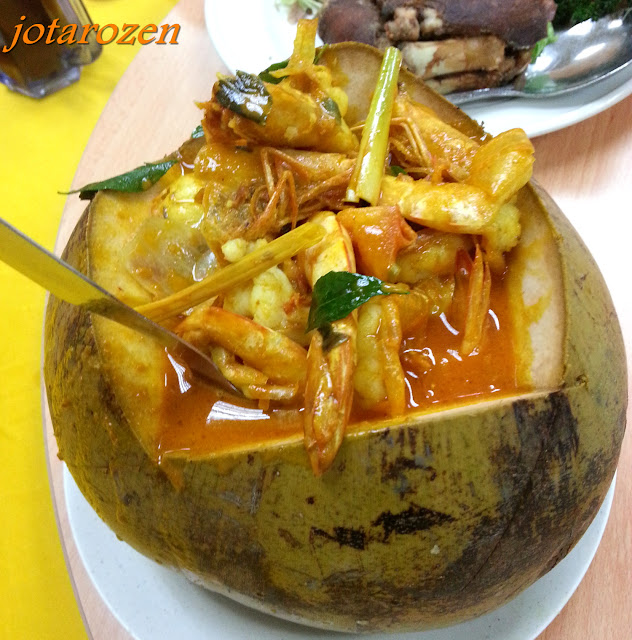 What came next was a surprising dish - Prawn Curry served in a freshly cut coconut. The cooked curry was poured into a newly cut coconut. Interesting, but how would it taste? 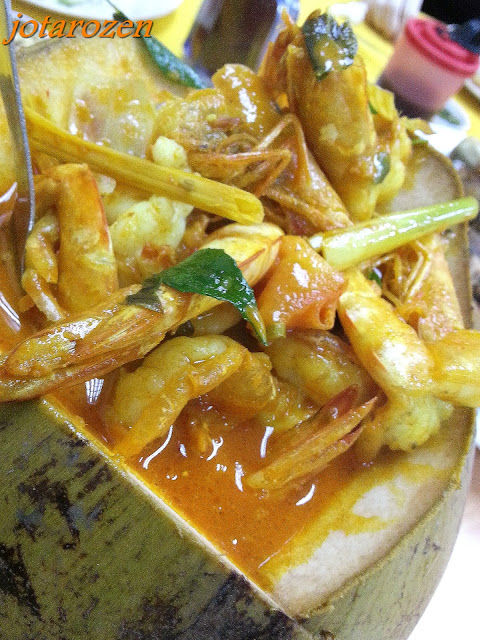 It tasted very good; the curry gravy was very sweet but not to creamy. I wonder, did they use the coconut water to cook it? The prawns were very fresh and best of all was what I thought were squid in the curry as we dug further into this dish.
It was not squid! It was the coconut flesh, that my brother had scrapped off from the sides - YummY! 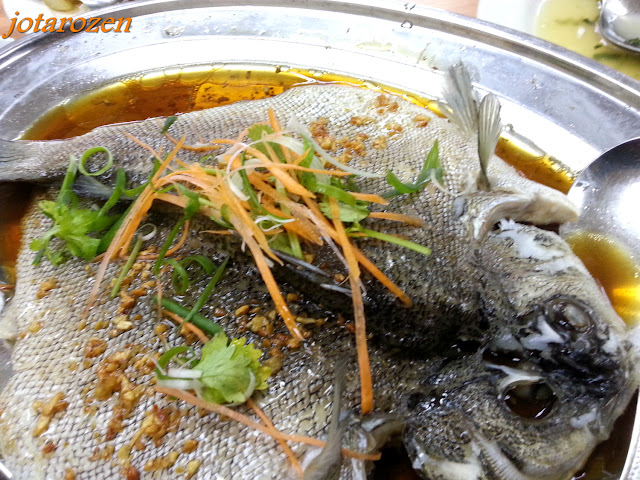 The restaurant had another surprised in store for us -
Steamed Australian Grouper, fresh and with its meat tenderly marinated in soy sauce and vegetable oil. Garnishing was fried chopped garlic. 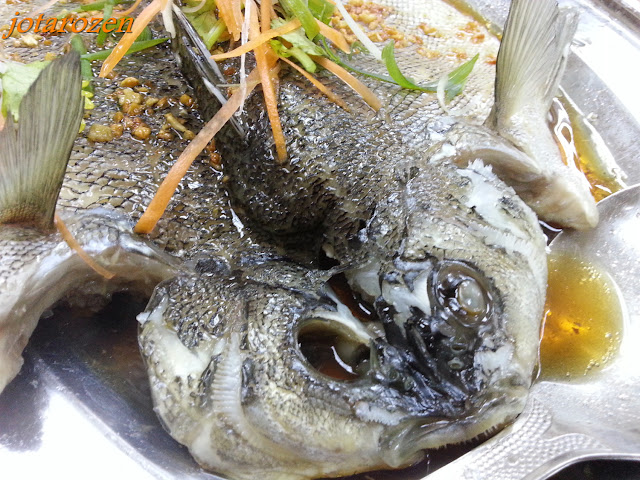 From the front, it looked like a mud-skipper ready to pounce on us.
Hah! We pounced on it instead and soon it was no more, nicely satisfying our tummies. 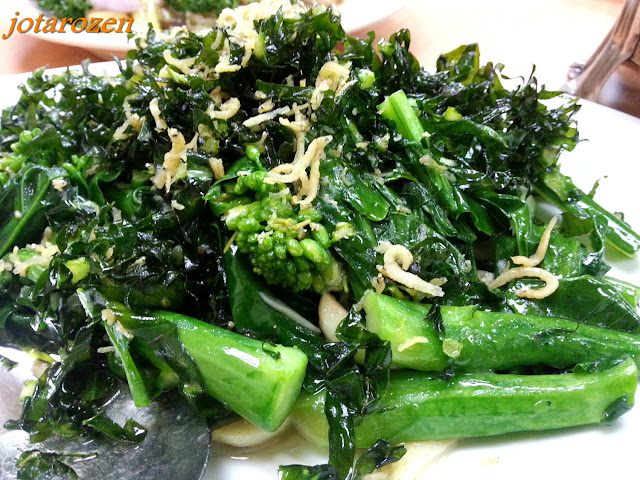 To round off the meal, we had this half and half dish.
Kai Lan vegetable; half deep fried and half stir fried.
I must say that the deep fried leaves were not crunchy enough, but then not all can be perfect. 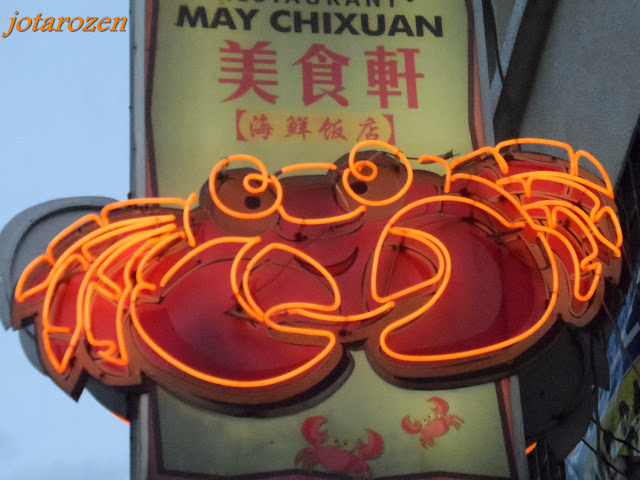 Overall it was a pleasing, sumptuous meal. No wonder the crab is smiling.
Ho! Ho! Hoh! Merry Christmas.

POSTSCRIPT January 2014:
We went to May Chixuan again and had the following- 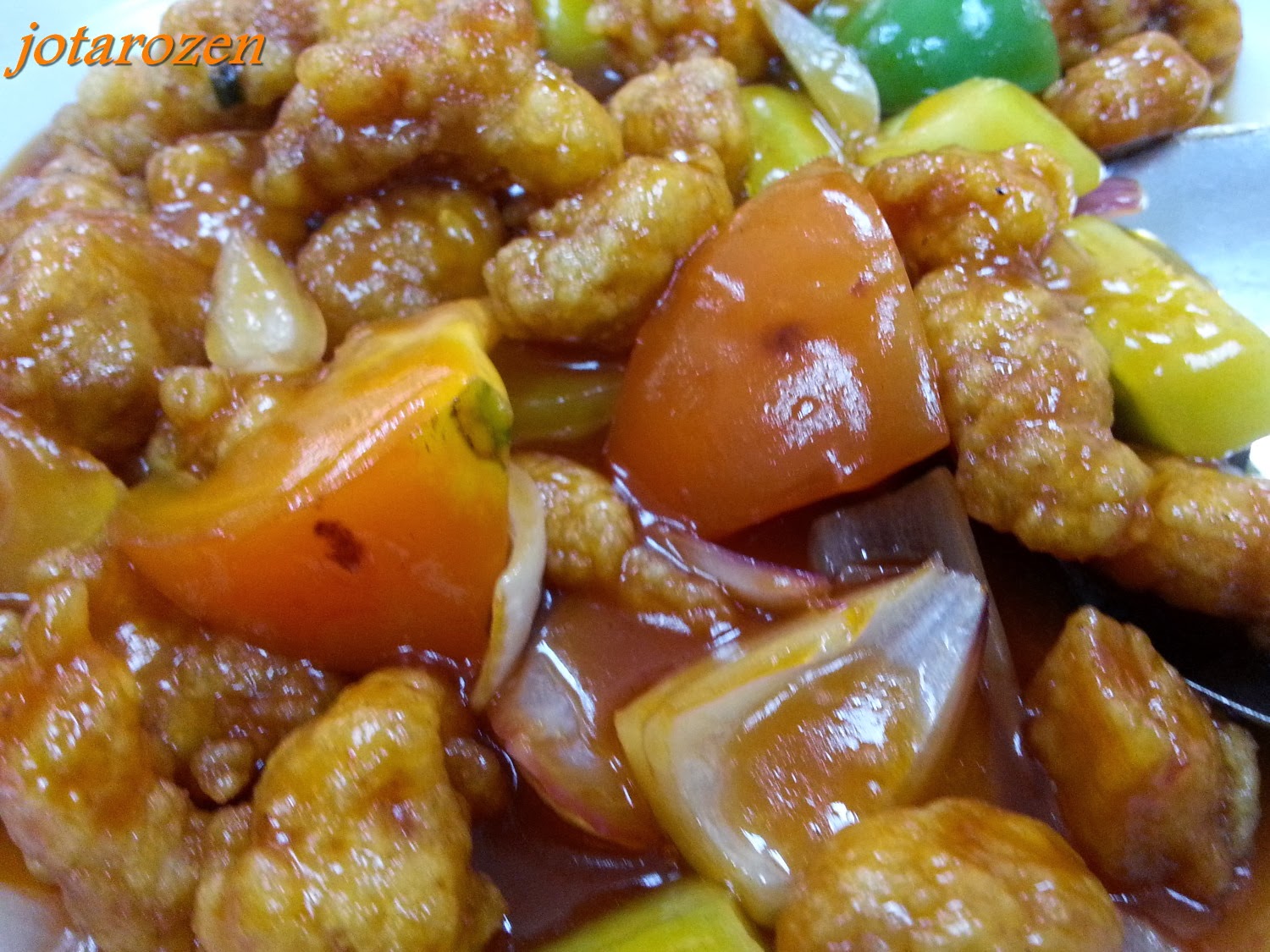 Sweet & Sour Pork. This is not one of their top dishes, my son liked this so we ordered. Taste-wise it was okay but nothing spectacular or special. Nine-spice Pork Belly (Kau Yoke). The one done here had a hint of white Chinese wine adding to the aroma. The sauce was thick and flavourful with the only downside is that the yam slices were a bit thin. 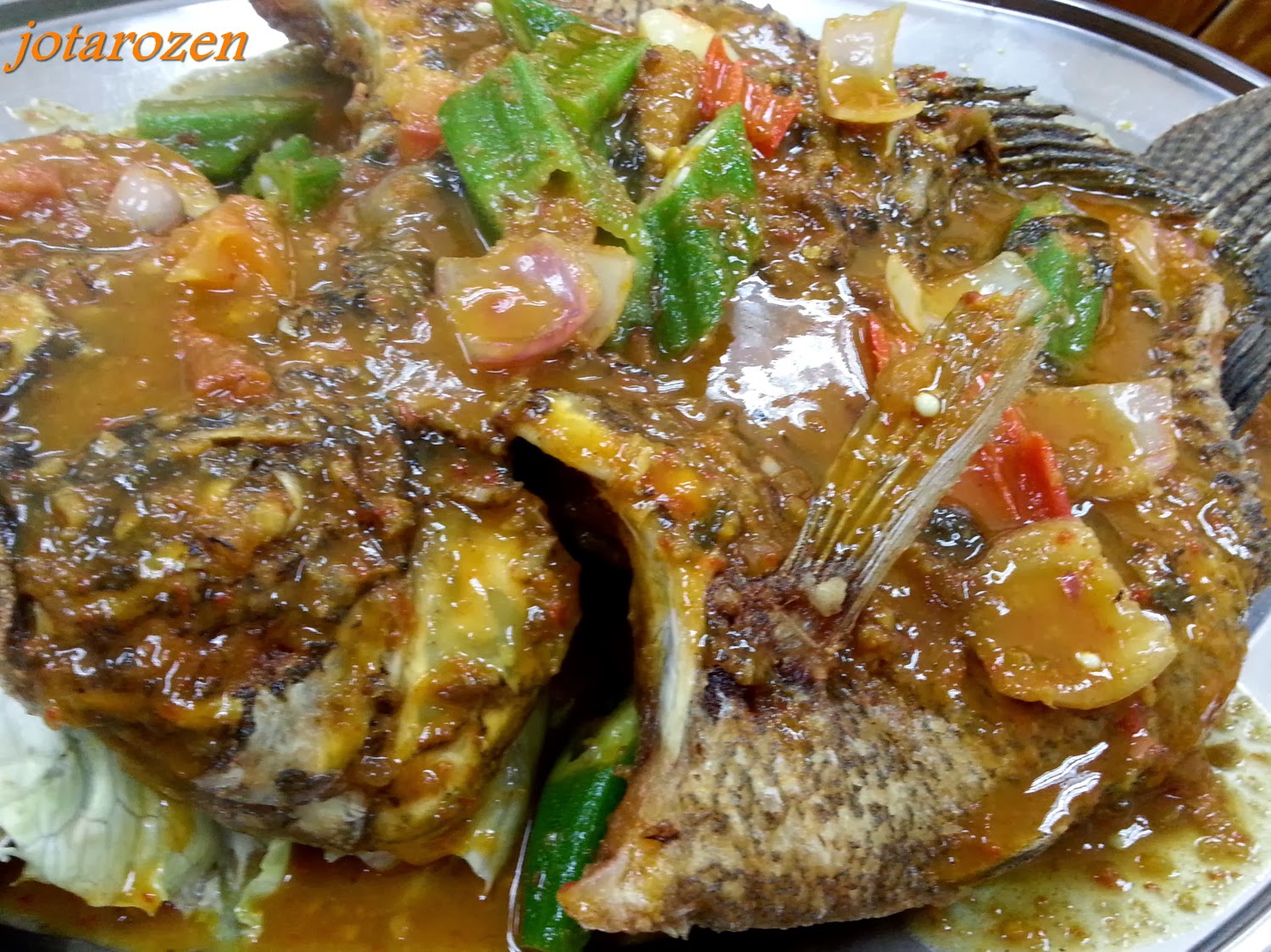 Deep Fried Tilapia In Sour Curry. The fish that came was huge but nicely deep fired giving its edges a crispiness and the flesh nicely cooked that it was still juicy. The curry sauce poured over it was well soaked into the fish. YummY! 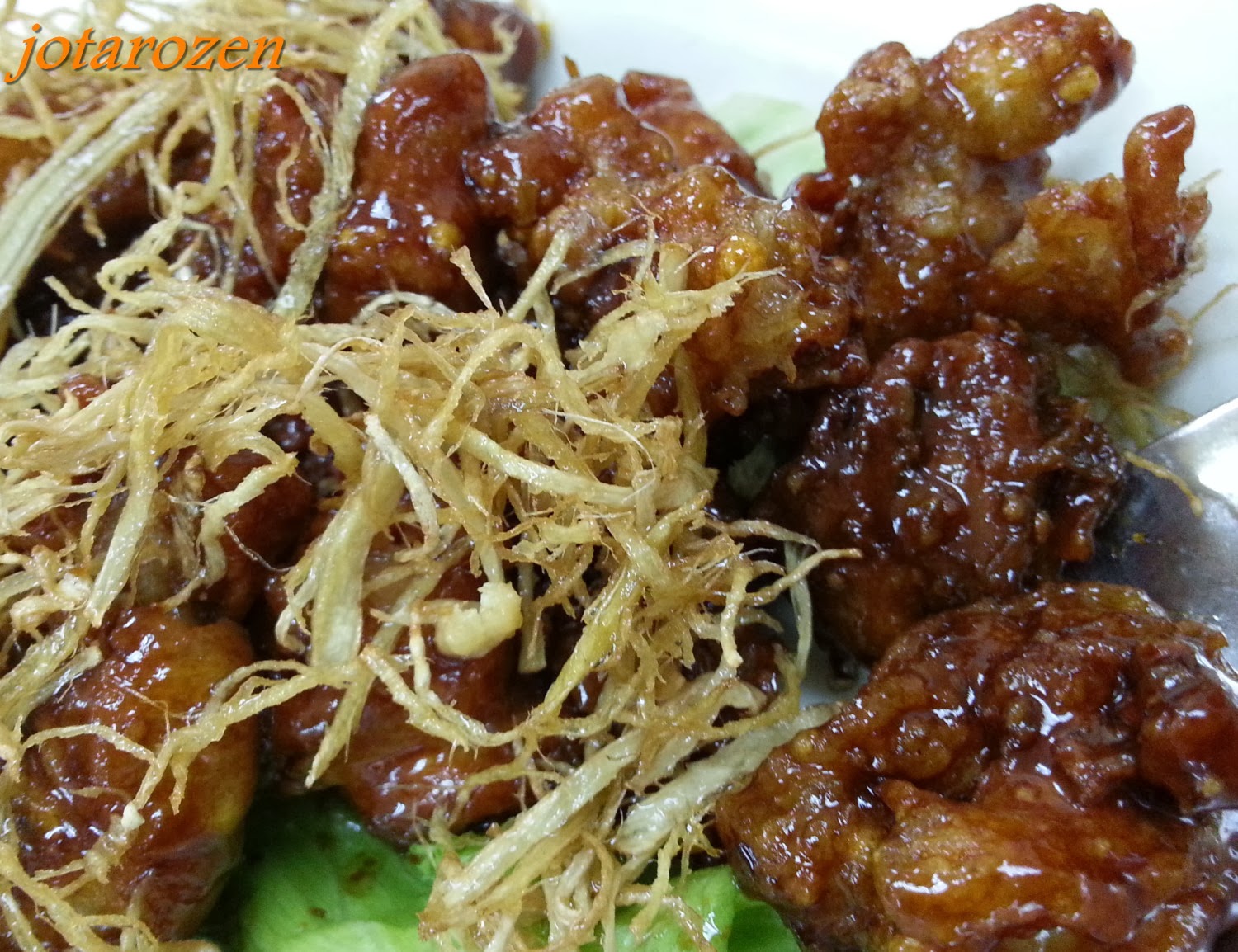 Stir-fried Ginger Chicken. Medium sized chunks of chicken seasoned with honey and sesame seed is stir friedd with deep-fried shreds of ginger added on. A very good dish with the chicken not overly tough from the stir frying. The honey, sesame seed and ginger blended well to give an extraordinary taste. Although a very tasty dish, I would recommend some other dishes with gravy to go with this as this one have hardly any gravy to go with white rice,. 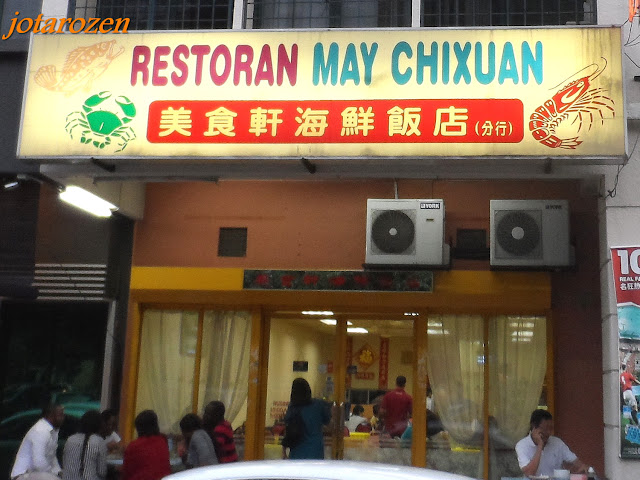 You are at - Jotaro's Blog  / FootSteps / YummY! / Chinese Food / Sumptuous Seafood @ May Chixuan
If you like this, view my other blogs at Jotaro's Blog
(comments most welcomed. if you like this pls share via facebook or twitter)
Posted by Jotaro Zen at 6:04 AM No comments: