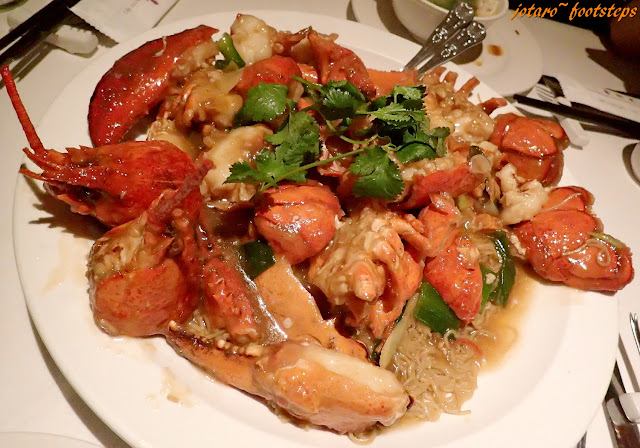 Bayswater, London, United Kingdom - September 2016
We were about to leave for a short holiday in Europe and one of the highlights were what food that we should not miss there. Sure I can check on the net, but there is nothing like getting first-hand experiences from friends. Here I have an advantage as I am a member of the Makan Club, a Facebook group of people who have delicate tastes for food and share the experiences unselfishly. I just posted a question of what good food to eat or not miss at the countries we were visiting. And a long list of replies came back.
So here we are at Mandarin Kitchen on our second day in London. Makan Club member Mike Wes has recommended that we not miss the lobster noodles at this restaurant. After finishing the dish veraciously to the lust drop of the gravy, I must agree with Mike - don't miss this Lobster Noodles when in London! Many thanks Mike, it was a very good call. 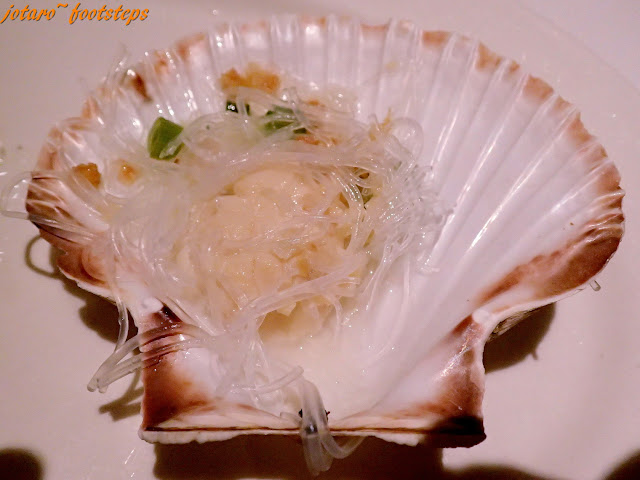 We started off with something light, an appetizer of Steamed Scallops In Light Soy Sauce. These came serve in their shells with some glass noodles atop and garnished with a bit of fried garlic and spring onion bits. 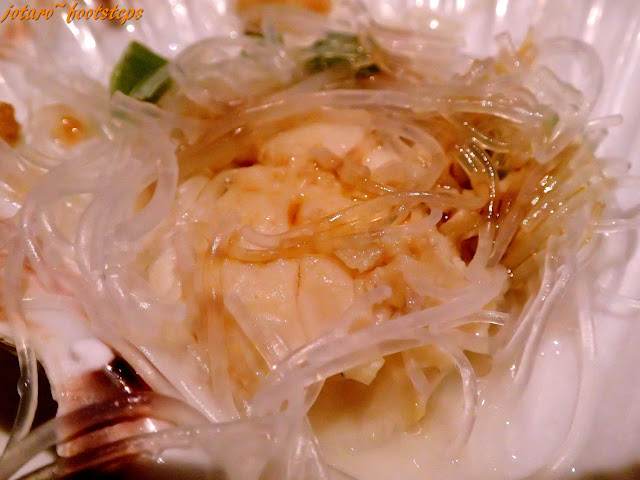 The scallops were fantastically fresh, tasty and exuding flavours of the sea. It was a great idea to add in the glass noodles as these took in the essence of the abalone in the sauce, making the noodles themselves very tasty too. 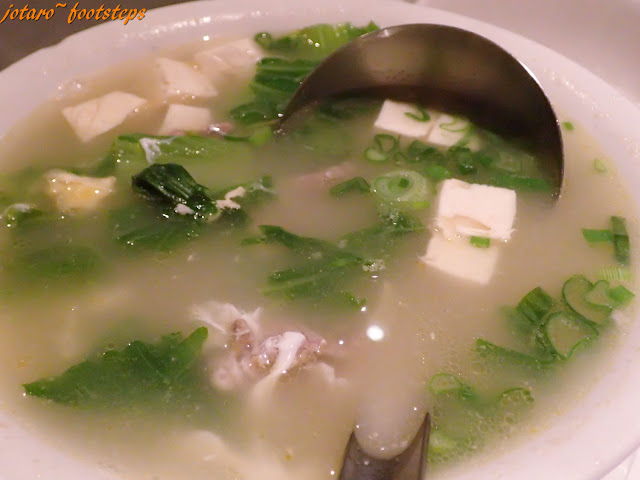 Next was a simple soup - Shredded Pork, Bean Curd (Tofu) Vegetable Soup With Salted Duck Egg. The bean curd had been diced into small manageable cubes. 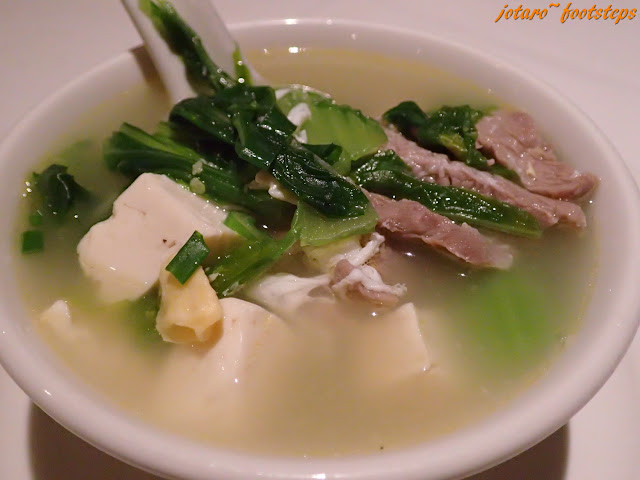 It was a very good balance with the shredded pork imparting their flavours into the soup and the bean curd balancing it off with their blandness. The small amount of salted duck eggs were just enough to add an oomph to the soup without being overpowering. 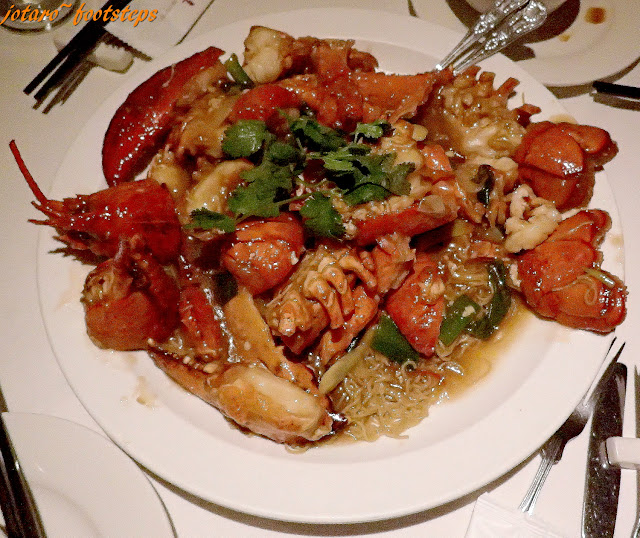 An finally came the piece de résistance - the Lobster Noodles! The captain advised us that since there were three of us we should have ordered doubles, and double it was! 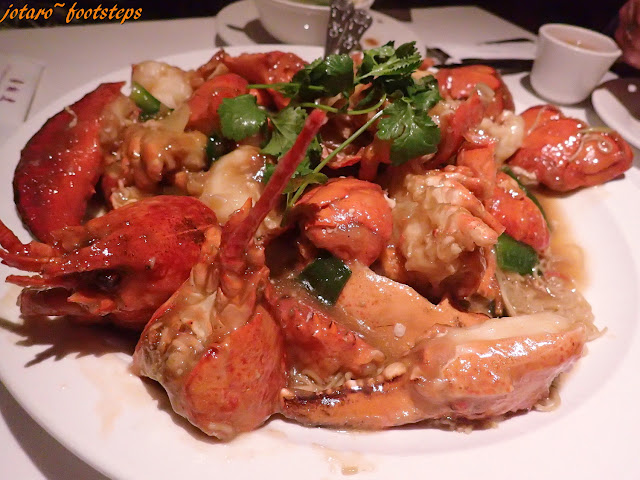 The noodles came with two medium sized lobsters, both looking very red. On the platter they looked huge, covering almost the whole dish until we could hardly see any noodles. 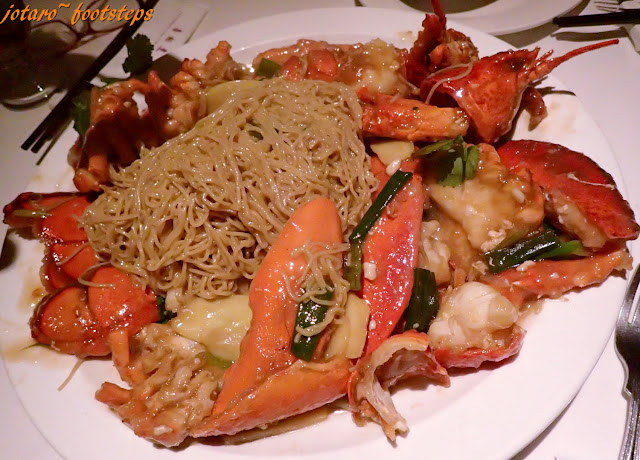 We moved the lobster pieces aside, and some steamy aroma wafted upwards smelling very good of lobsters... just the smell of it was making us hungry! 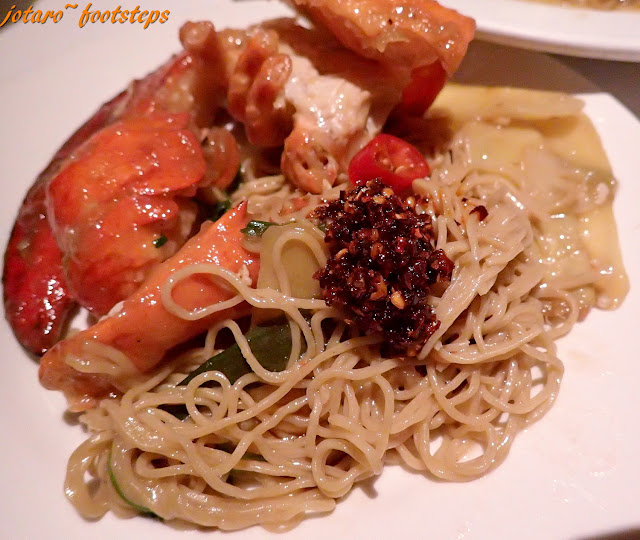 Here's our individual servings. The noodles are "sang mee" noodles, something like wantan noodles but not as springy. The dish was cooked with some sliced ginger and long cuts of spring onions. 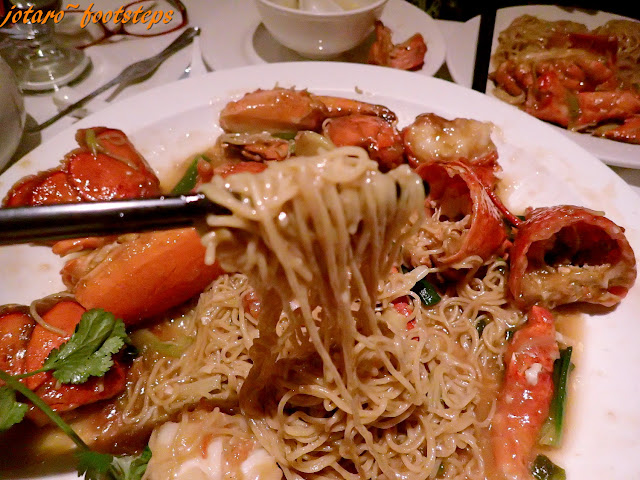 The chefs had done this dish very well, the lobster flavors had imparted well into the gravy bringing their tastes into every bite-ful. And the gravy itself was suitably thick to "stick" onto the noodles.
And the lobsters? I had had lobsters and the ones I took previously did not leave much of an impression on me as I found their meat a tad tough and not as flavorful a large prawns. But these one here were so much different - meat softer and easy to bite, and full of succulent essence.
We were provided with shell cracking thongs; but again the chefs had done their work well. The claws had been cracked without leaving nasty shell bits behind, and even the legs had cut slits in them so they could be easily opened to get to the meat... there was no need for us to use the thongs. 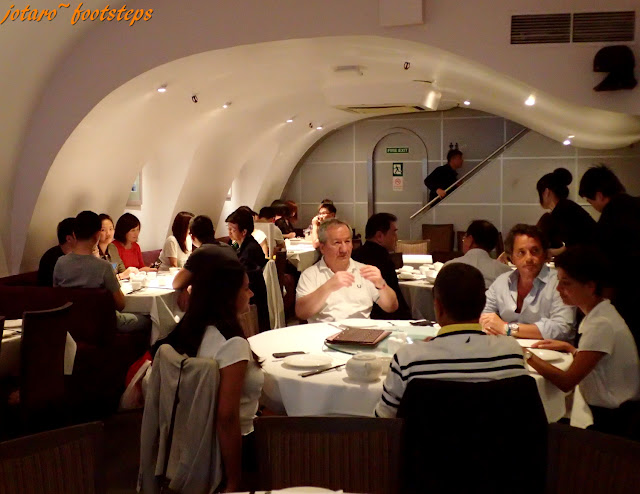 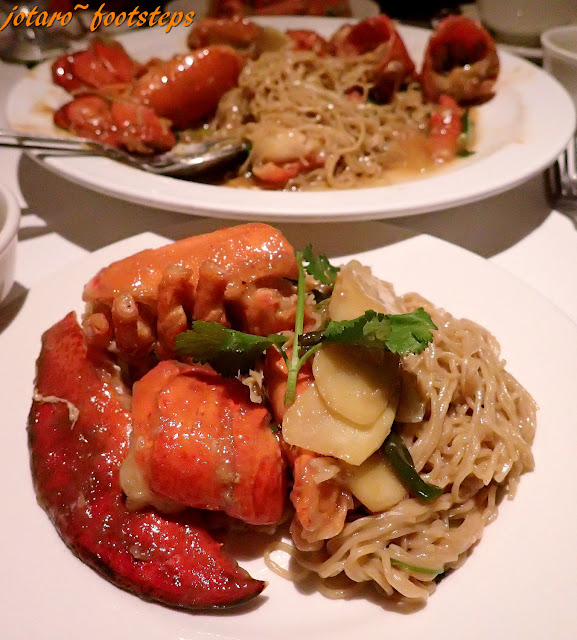 ... just the right ambiance to enjoy a wonderful meal.
For the three of us, this sumptuous meal came to £106/=; rather reasonable considering that we had two lobsters.

Mandarin Kitchen has quite an extensive range of more delicious dishes. Below are their menu: 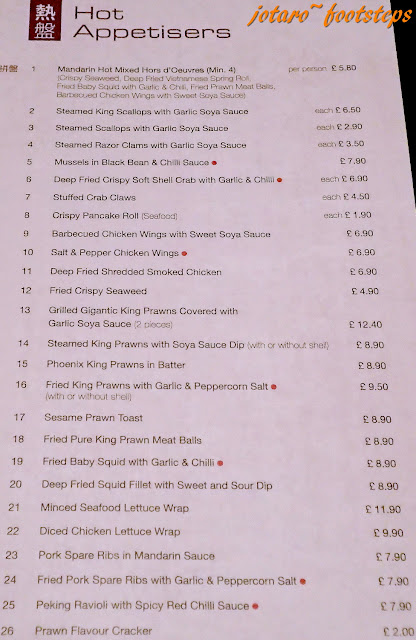 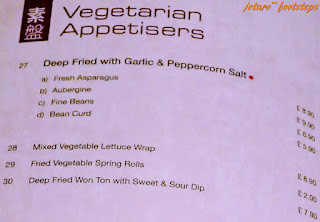 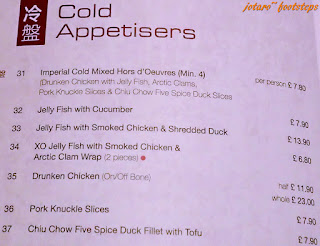 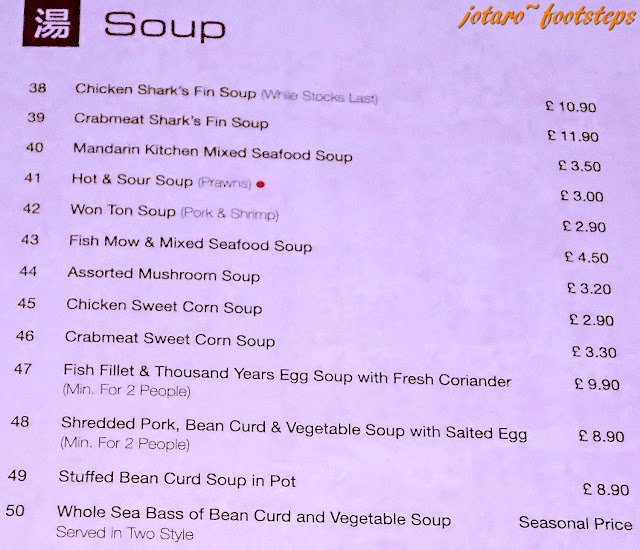 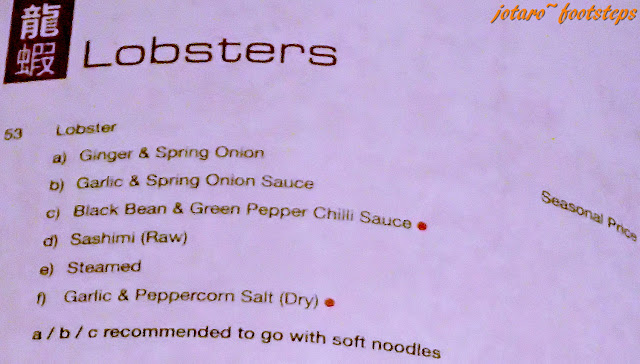 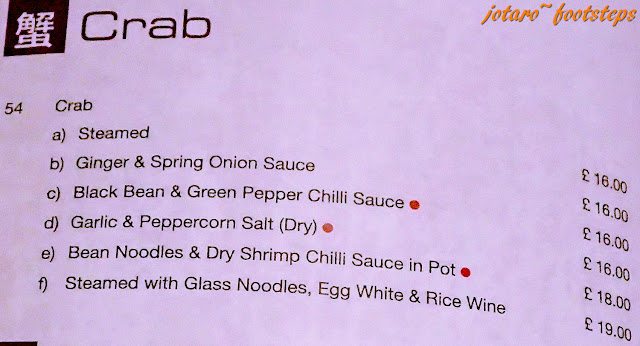 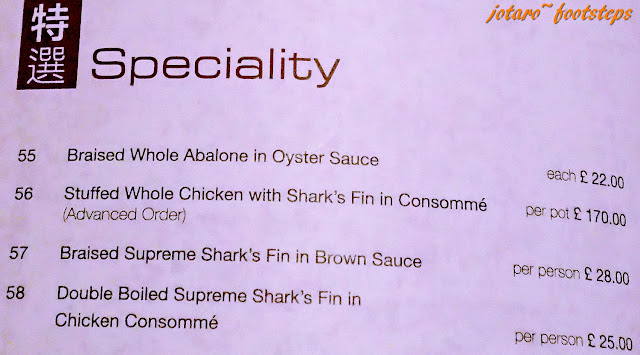 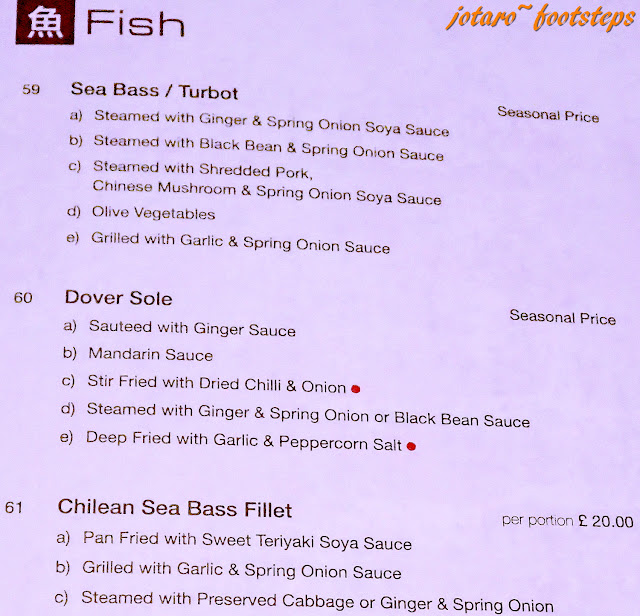 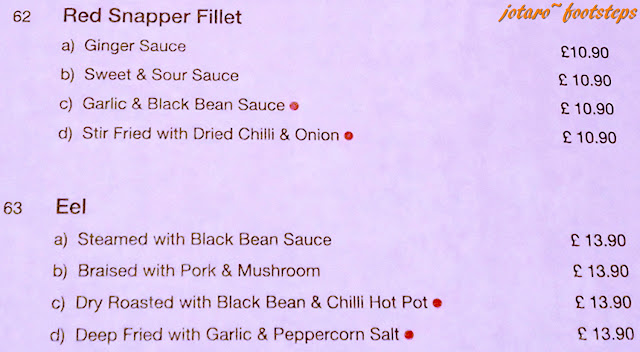 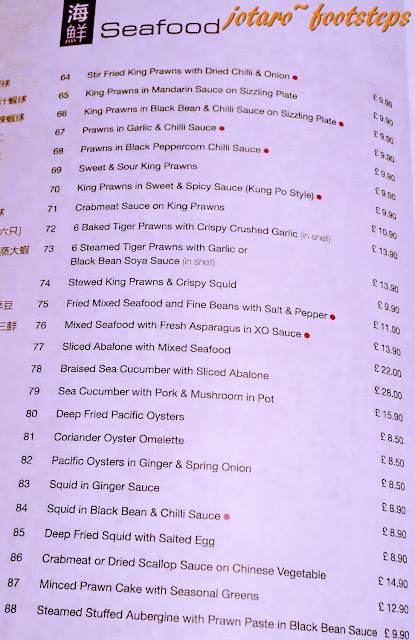 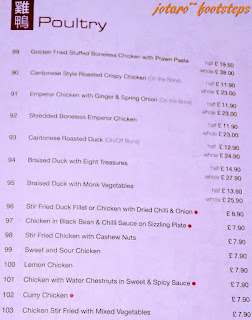 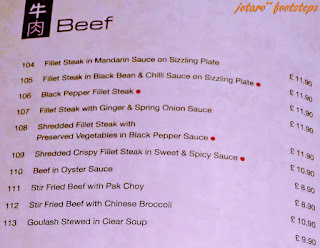 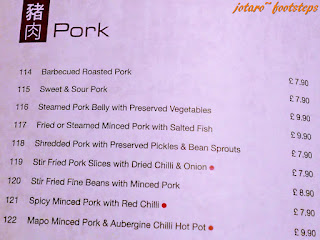 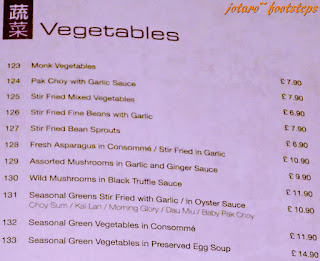 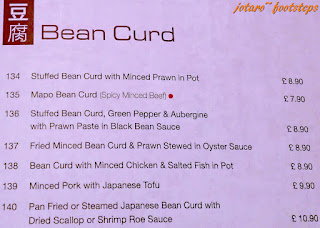 You are at - Jotaro's Blog / Footsteps / YummY! / Europe 2016-Chinese Food / Chinese Noodles / Lobster Noodles @ Mandarin Kitchen London
If you like this, view my other blogs at Jotaro's Blog
(comments most welcomed. if you like this pls share via facebook or twitter)
Posted by Jotaro Zen at 10:02 AM