You are at - Jotaro's Blog / Footsteps / India 2013 - Sites / Taj Mahal / Pt.3 The Annexes| Go To Pt.1 / Pt.2
Footsteps - Jotaro's Travels
TAJ MAHAL- THE ANNEXES
Agra, India - February 2013 (A Wonders Of The World Site)
The Taj Mahal is on of the most beautiful buildings in the world; its simple beauty is complemented by several buildings within its compound. Most of these buildings were built with red sandstone in contrast to the white marble of the Taj Mahal, two of these are larger ones that stand out distinctly.
Both these buildings faces the Taj; on the western side is the Mosque and on the eastern side is the Jawab (Answer). Both buildings look the same with the exception that the Mosque marble flooring is outlined with black marble borders to indicate 569 prayer rugs. The Jawab also lacks a mihrab (a niche in a mosque's wall facing Mecca). 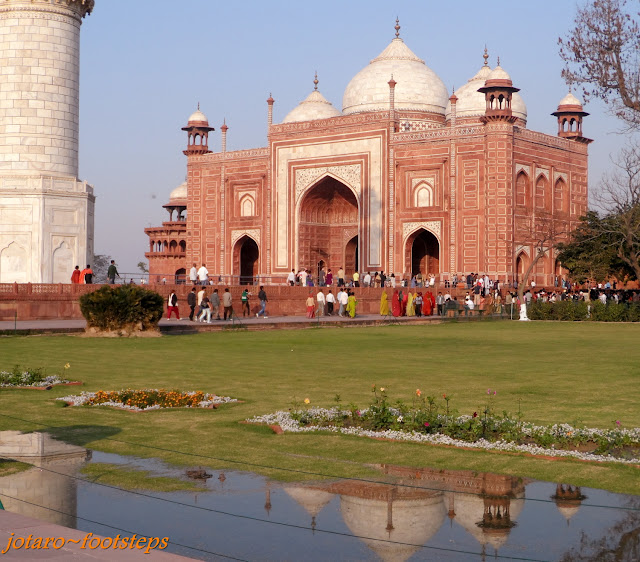 Both the buildings sit on the same platform as the Taj and have three main domes in the style of Mughal architecture. 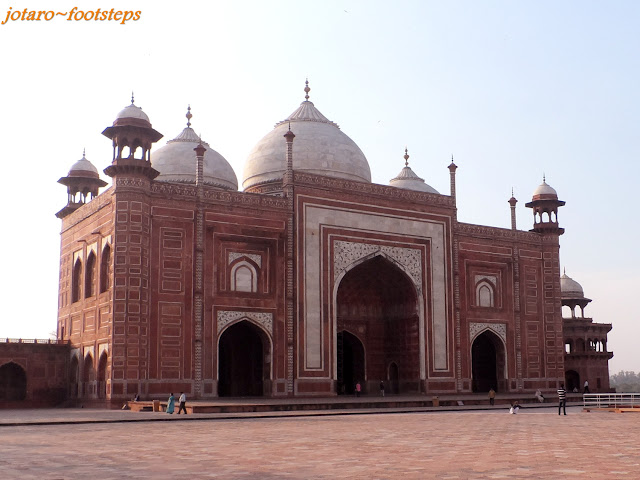 Viewed from the Yamuna River side. 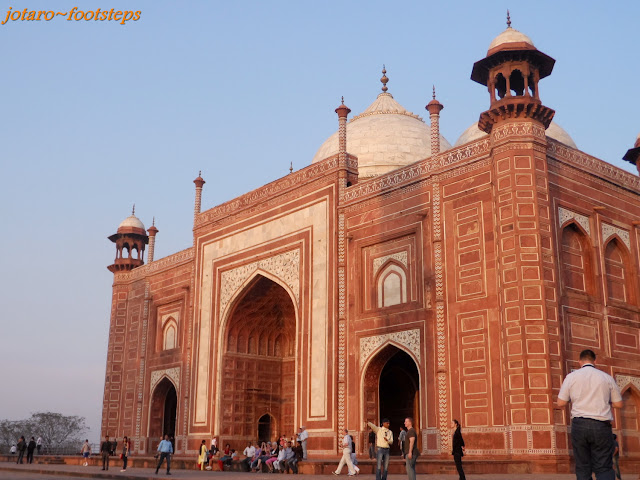 Closer view showing the architecture of the building. 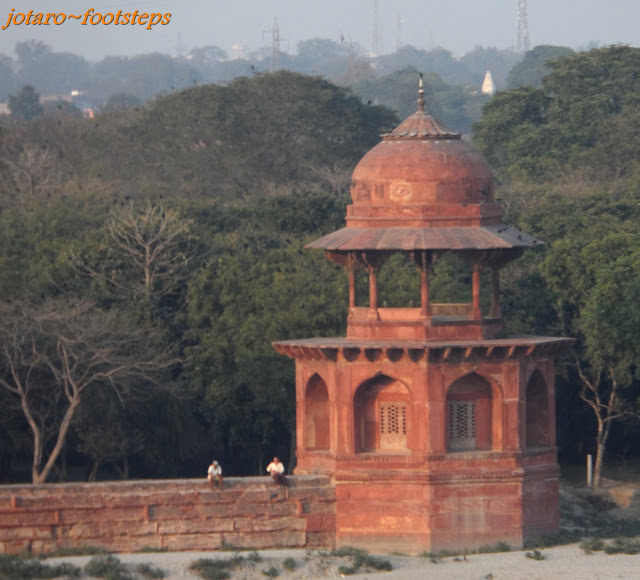 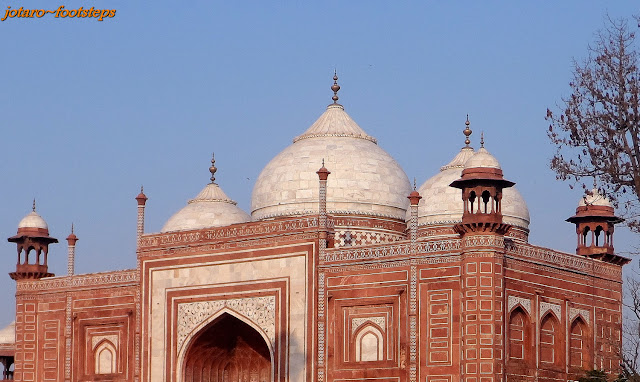 Close up of the roof showing the three mains domes and the corner minarets. 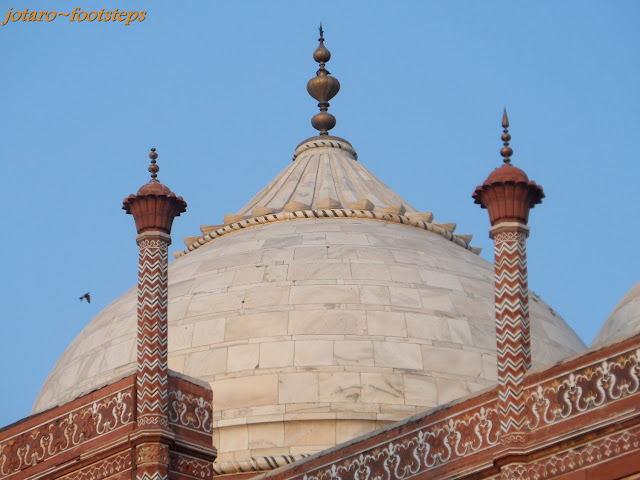 The main dome built from white marble stands out against the red sandstone walls. 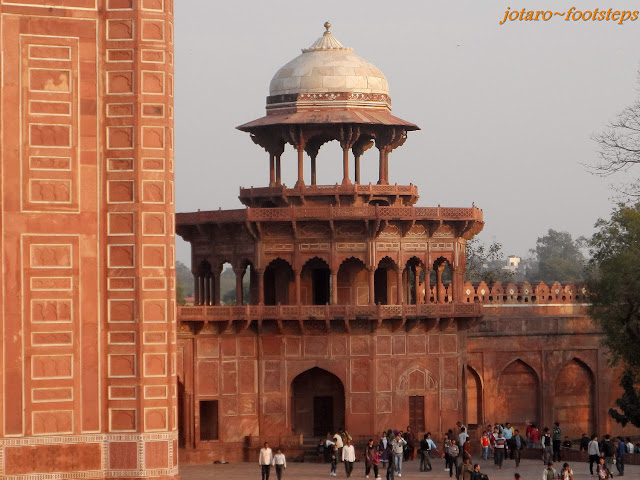 On each side of the main Jawab building are two wings with multi-arches and a dome. 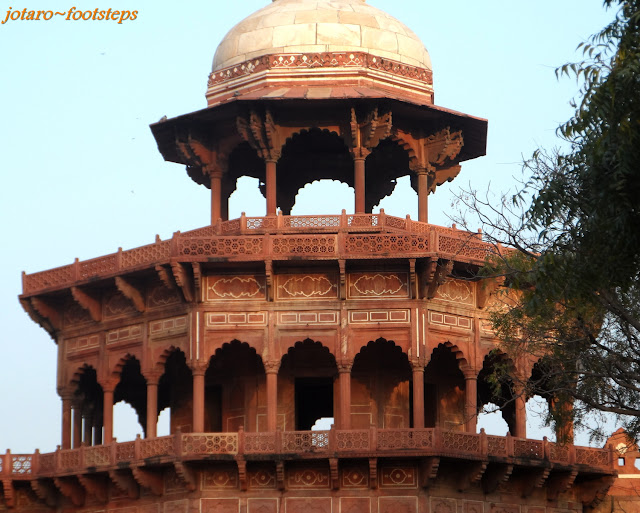 Close up of one of the wing showing details of segmented arches, elaborate cornices, etc. 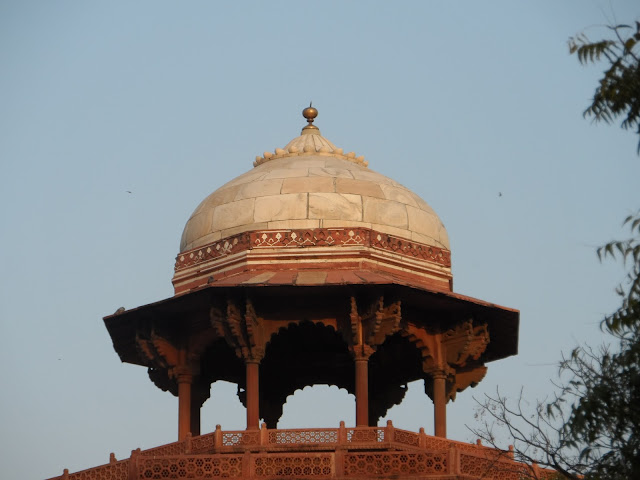 Close up of the dome. 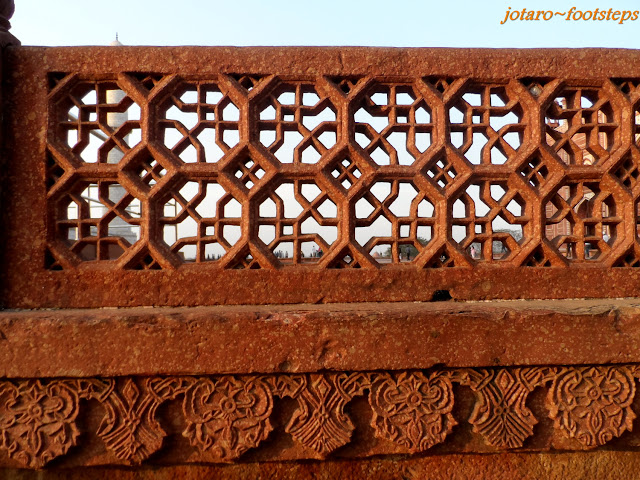 Close up of one of the four corner minarets. 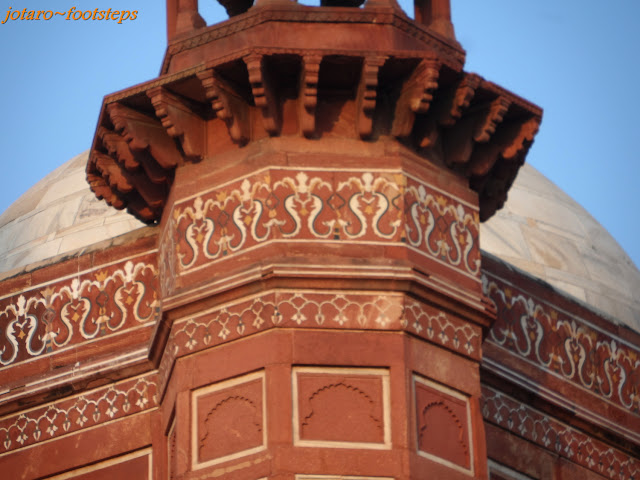 Each of the minarets are decorated with bottom cornices, and white marble stylized floral inlaid into the red sandstone. 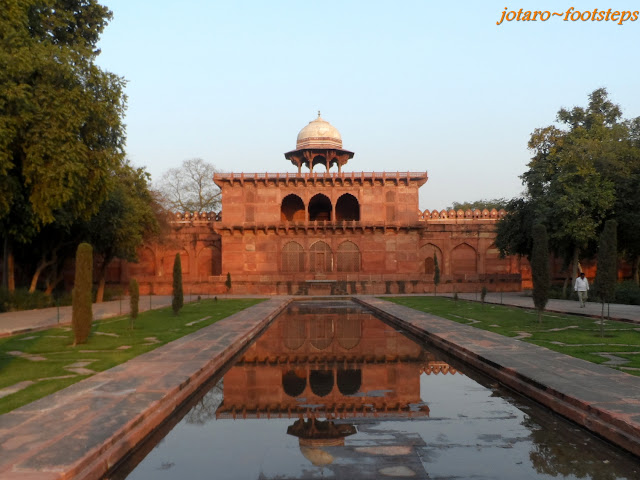 Along the two perimeter side walls are several smaller structures. These contains the tombs of lesser wives and favourite hand-maidens of the principal wives. Smaller pools branch out from the main central pool to reflect these buildings. 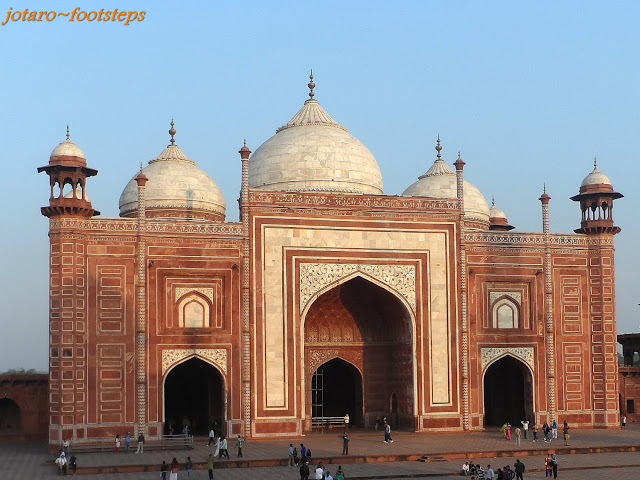 These annexes and ancillary buildings are beauties by themselves, beauties that mirror, contrast and enhances the greatness of the Taj Mahal on the whole. 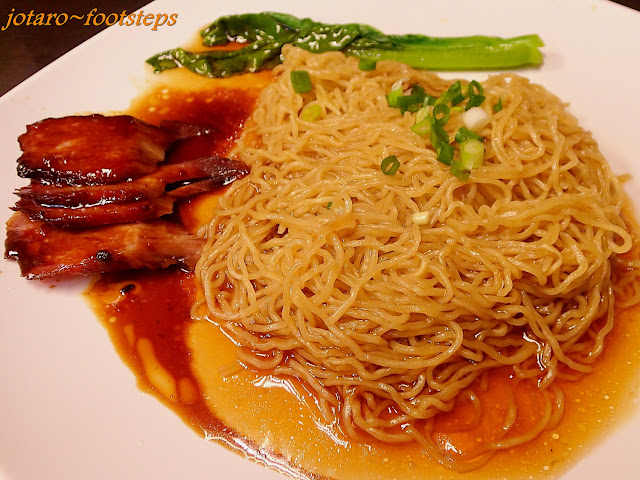 Huang Di Noodle Palace is an odd place, but I mean odd in a good way. With such a regal name one would be forgiven if one had thought that this is a "palace" for fine Chinese dining.
No, they do not serve fine Chinese cuisine, but they do have one of the best wantan noodles that I have ever tried.

The place is also a place of contradictions; with a name like Huang Di it could have been associated with Shih Huang Di, China's first emperor. But most of the shop's decorations are tied in with the Manchu era, well actually Huang Di means emperor in Chinese.
The place may not have the finesse decoration of many up-scale restaurants but it does have trappings of a regal manner like the above wall mural poster of Manchu soldiers at the Forbidden City. 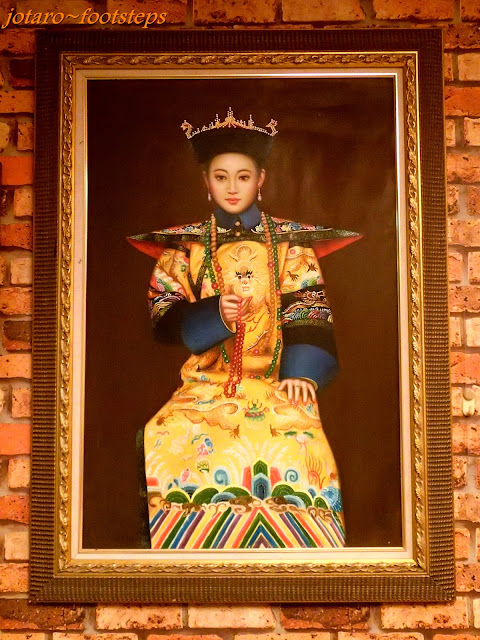 And some paintings of Manchu royalty hanging from the walls. 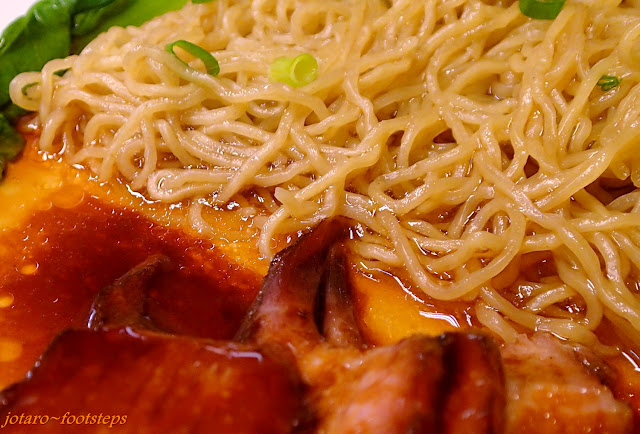 The set-up may lend that tinge of royal air to the place, but it is the food that one should go for. Like this kon-loh noodles. It not exactly dry like one would find from other places; it comes with a bit of thin gravy. Their char siew may not be one of the best, just mediocre; but it is that gravy that gives these noodles that royal class. The gravy was sweet and tasty and went very well with the bitey noodles. 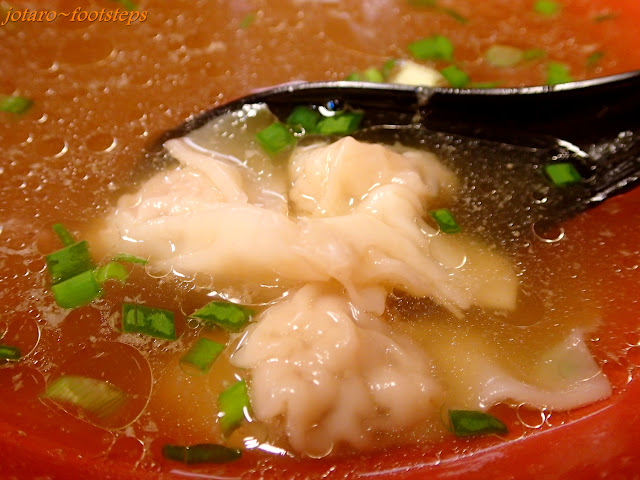 The noodles came with a small bowl of wantan soup, another "one of the best" for me. The wantans with minced meat were good but it was the soup that was the killer, tasting fantastic with stock similar to that of shark's fin soup. 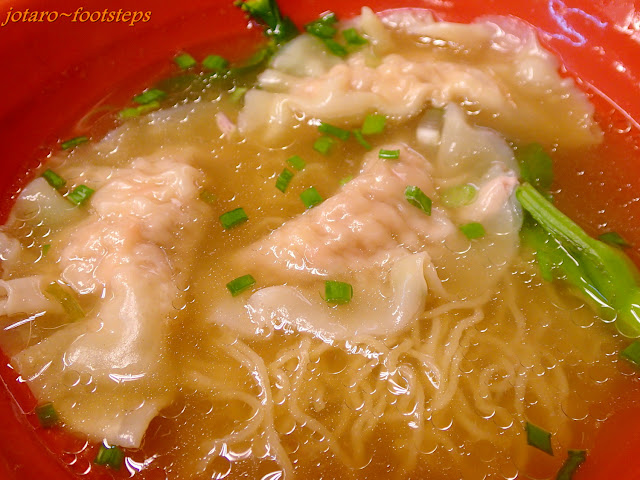 In fact we could not get enough of the soup and ordered a bowl of sui kow soup noodle.
YummY! Other noodles dish that they served were these fried glass noodles. This was one of my favourites too with the glass noodles not too soft and slightly crunchy. The eggs, chopped dried prawns and deep fried garlic went superbly with the noodles. 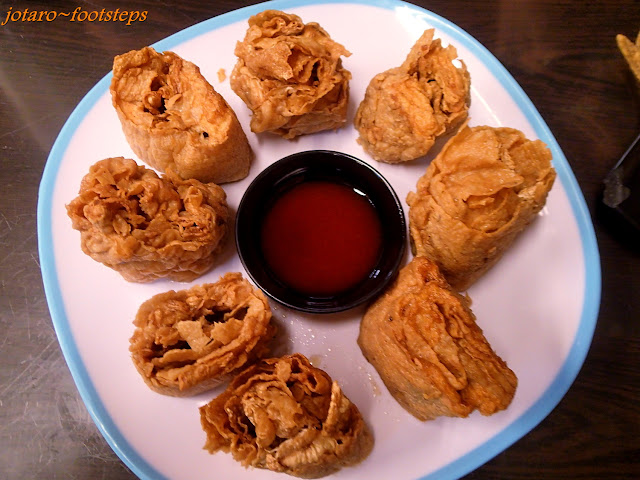 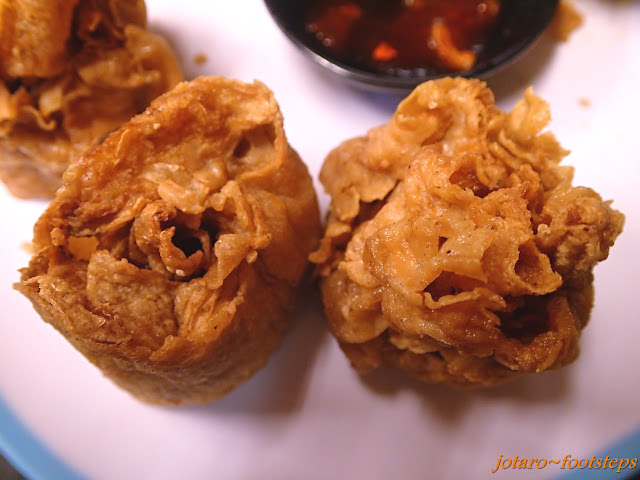 The tofu skin were rolled but not too compactly such that the deep frying were evenly ensuring that the skin were evenly fried on both sides. Dip this into the chilli sauce and the slight bitter-pungent taste of the tofu skin merged with the sweet-spicy sauce with an oomph! 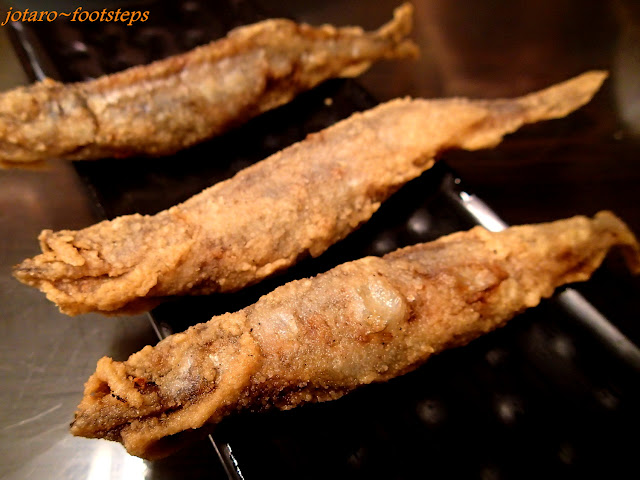 Surprise! Surprise!
They have Japanese Shishamo fish here too! Deep fried with a thin layer of batter. 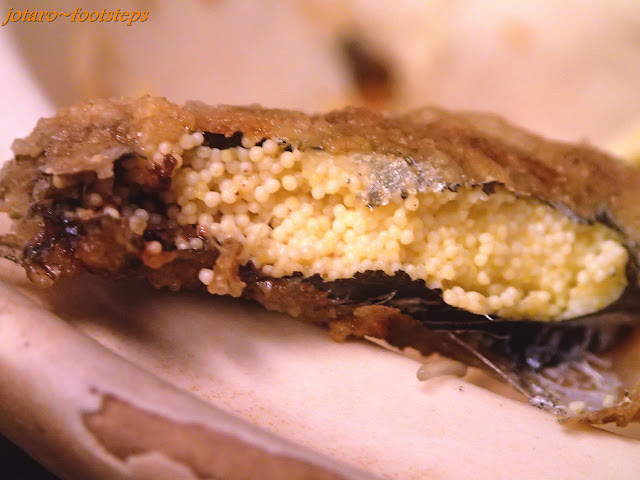 This is the real stuff, not some make-do to emulate those from Japanese restaurant. Slice the stomachs open and they are full of roe. 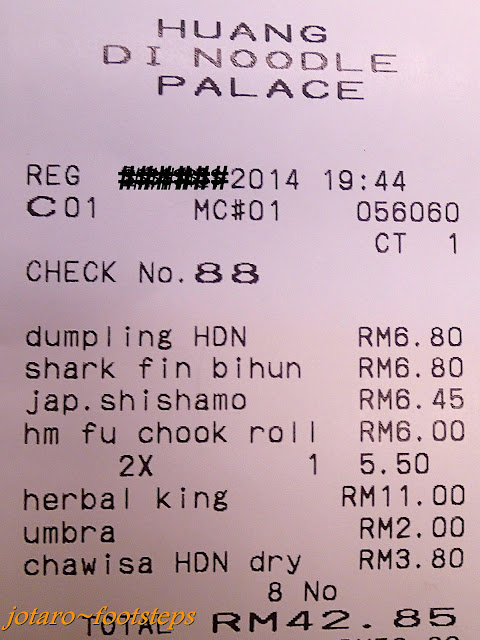 The place may have a tinge of regalness, the food was royally good; but the price...
... the price was the surprise. Very affordable prices, in fact the noodle dishes cost less than those served at coffee-shops. The Shishamo fish were only priced at RM6-45 for three, a real steal! 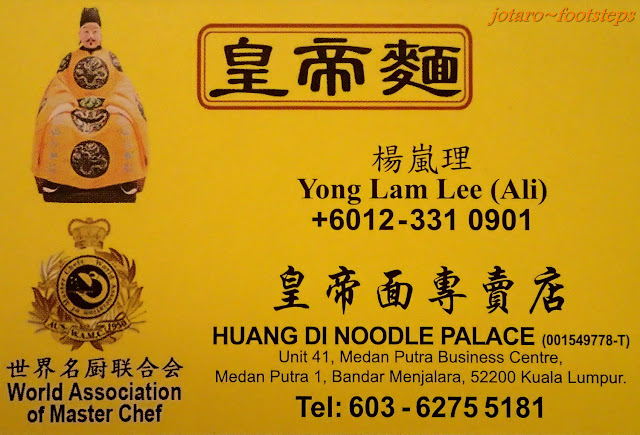 In a way, this Huang Di has that royal touch, it is owned and operated by Ali a member of the World Association of Master Chef. Seldom do one find a master chef running a noodle shop, so come and appreciate his fine cooking. 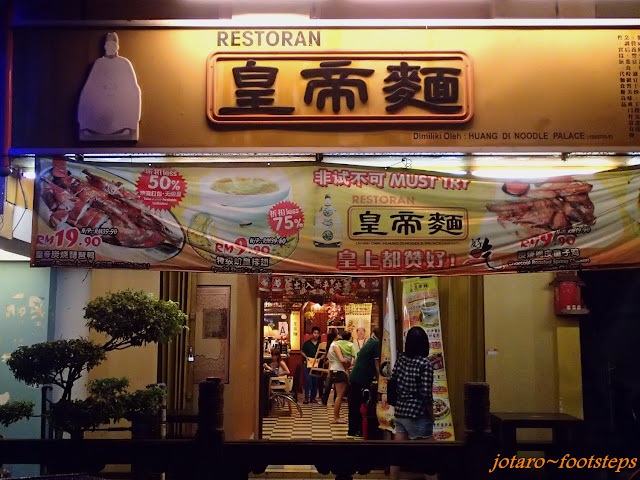 
You are at - Jotaro's Blog  / FootSteps / YummY! / Chinese Food / Noodles / Emperor Noodles @ Huang Di Noodle Palace
If you like this, view my other blogs at Jotaro's Blog
(comments most welcomed. if you like this pls share via facebook or twitter)
Posted by Jotaro Zen at 10:36 PM No comments: