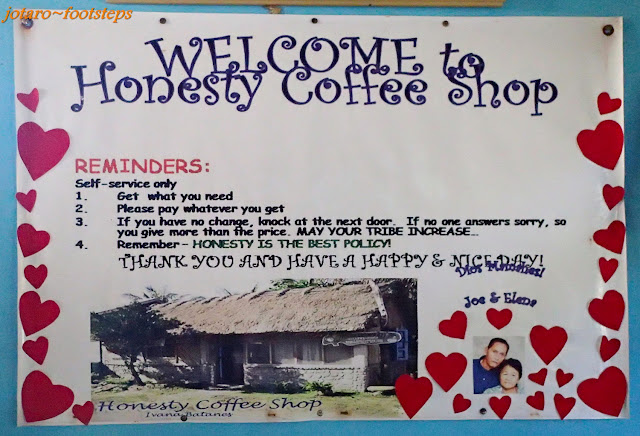 Honesty is always a good policy. It is at a small little hut coffee-shop at a quiet sea-side in the Batanes, where honesty is more profound. You see, nobody man the shop!
Patrons have drinks, buy souvenirs and through the goodness of their heart drop payment into a box. This place is called the Honesty Cofee-shop, but many refer to it as the Honesty Cafe.


We were on a cycling tour of the Batanes in the Philippines and found the islands to be scenic. The locals were humble, friendly and more importantly very honest. In fact they claim to have a zero crime rate. 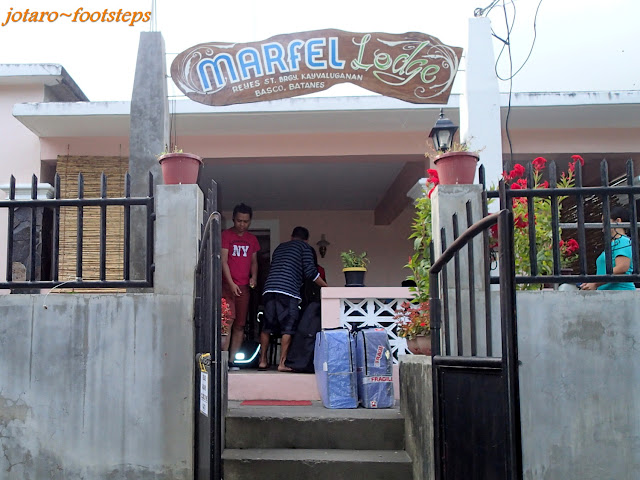 At Marfel's Lodge where we stayed, we curiously saw canned food, tit-bits, instant noodles, etc. stacked in open shelves in the kitchen (where guests could do their own cooking). These food stuff had price labels; guests can take any, register their purchase in a log-book and drop payment into a rattan basket. Yes, just a basket which was not locked or even chained to anywhere. We were very impressed! 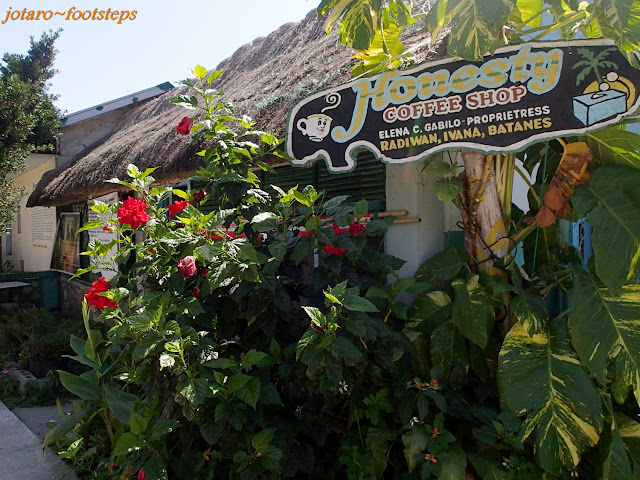 It was when we cycled around South Batan and dropped into the Honesty Cafe that we found honesty to be even more evident. Nobody man this shop, every once in a while a lady comes in to top up hot water for the drinks. 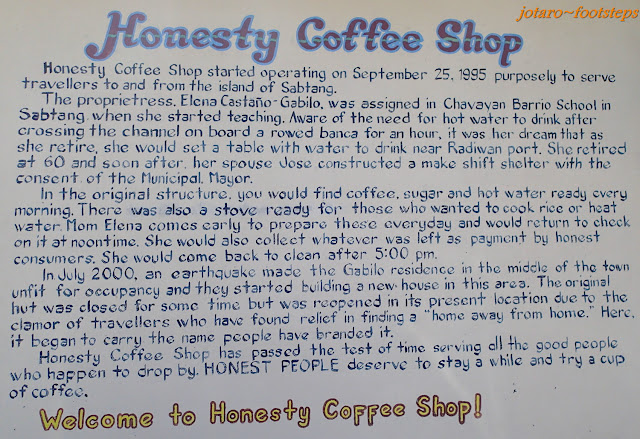 The shop was founded by Elena Castano-Gabilo and her husband, Jose, in 1995. The above poster tells a bit about its history. 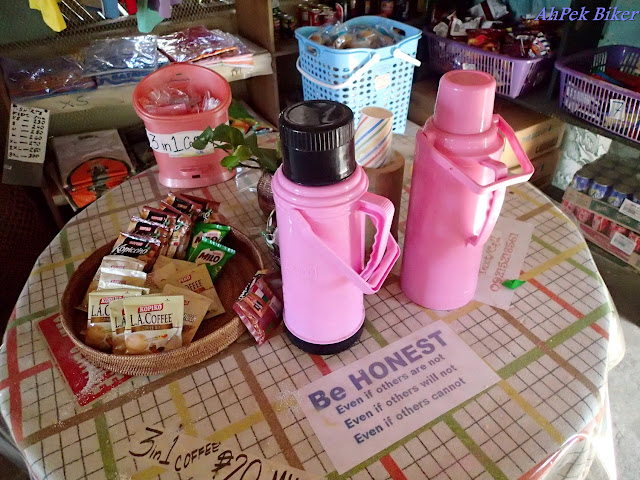 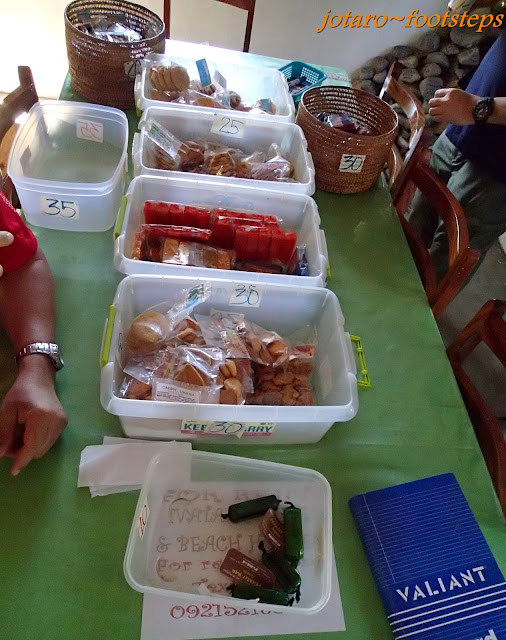 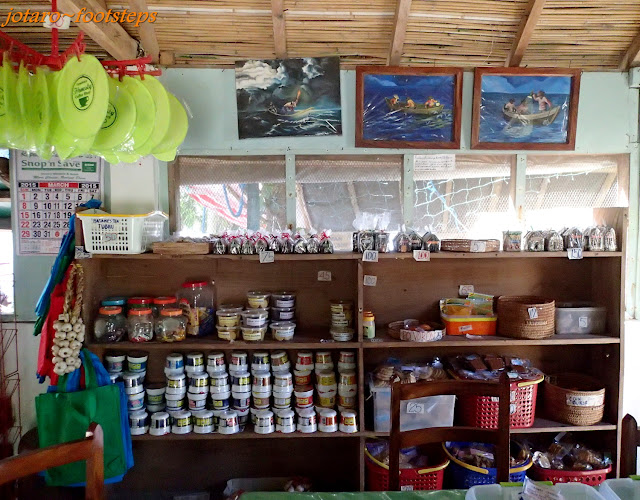 All around this shop, on shelves, hanging on the walls and ceiling are other goods for sale. There are local handicrafts, paintings and even the renown Itbayat garlic. All items have a price tag and are reasonably priced. 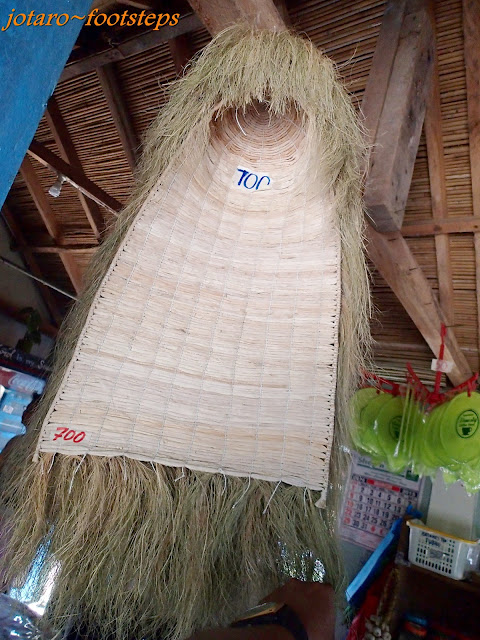 They even sell Vakuls here. Vakuls are wig-looking headdress made from dried tatch palm fronds. The Ivatan tribal women -folk wear this for protection against the sun and rain. 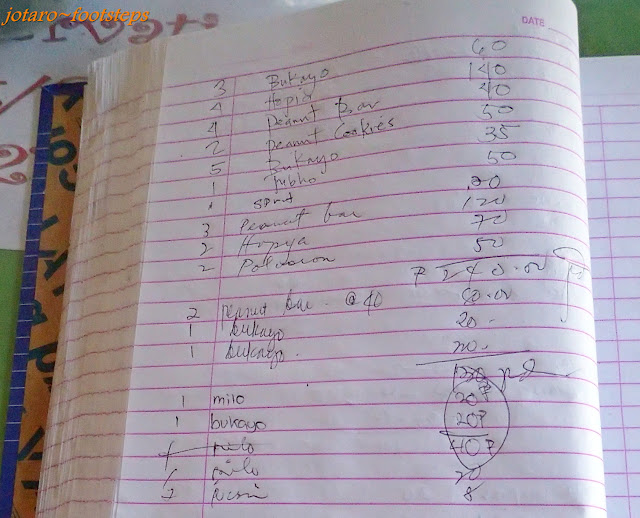 When it comes to payment, customers diligently write what they purchased together with the price into a logbook next to the payment box. 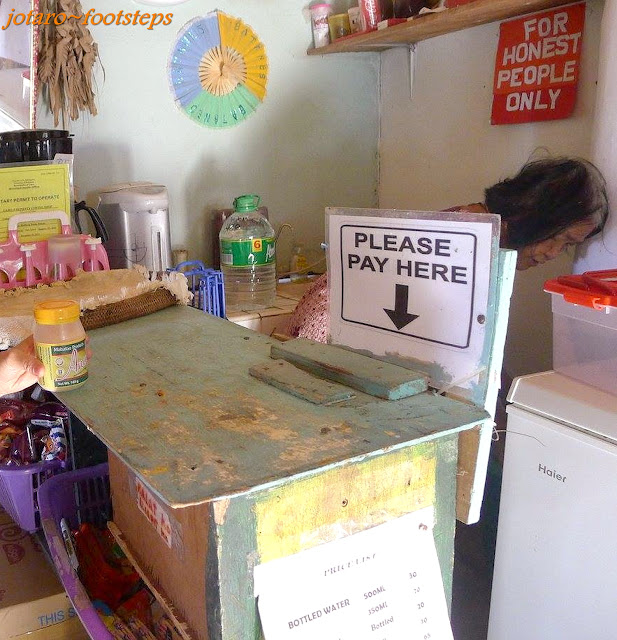 The soul of the place permeates into the conscience of all who come here, everyone is honest and none cheats. Customers honestly drop payment into a wooden box; impressed by the place some even drop in more than what they are meant to pay. 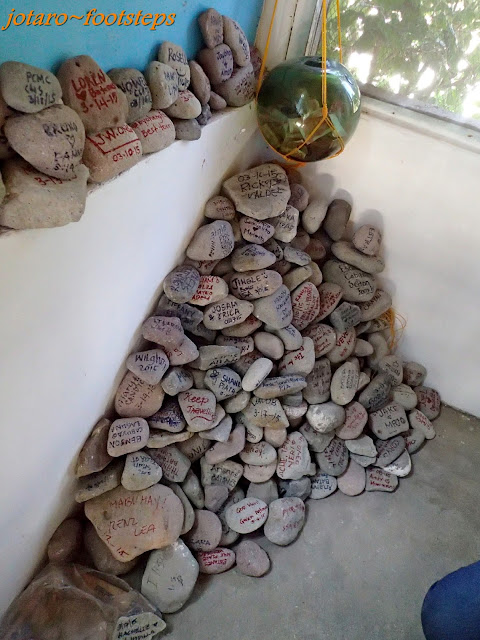 In one corner of the shop, visitors can write their names onto rounded stone and leave behind a testament that they have come here and have been touched by the place and the values that it represents.
I wonder what will happen to these stones when the pile becomes too big, will they be used to build and arch, or even better a house?

Perhaps the many posters that hangs all over the shop help to remind patrons of the virtue of honesty. But I think it's more that that, I believe this place has been touched by God and all who comes feel his touch: 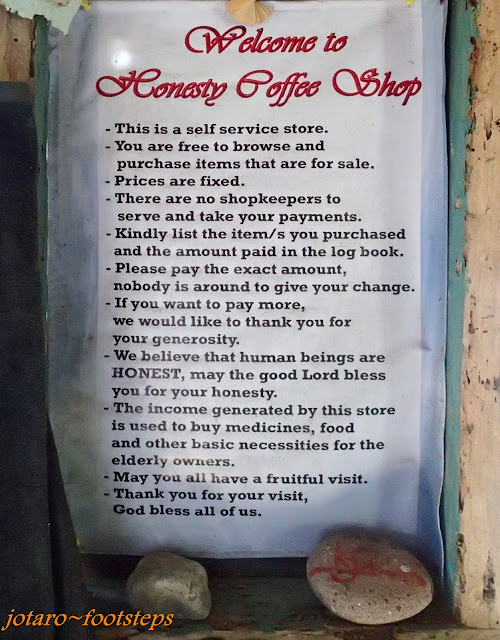 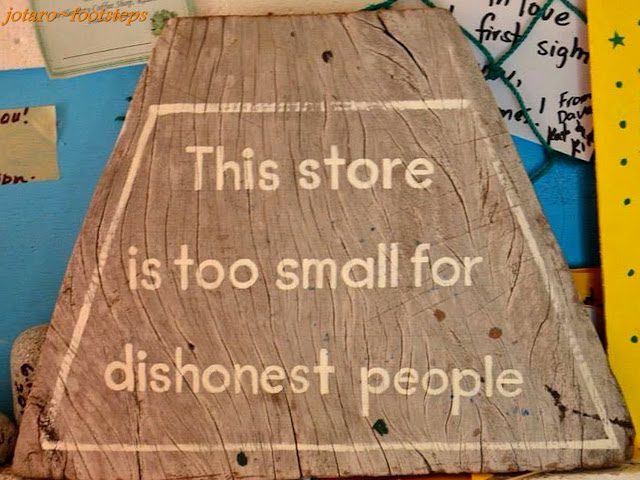 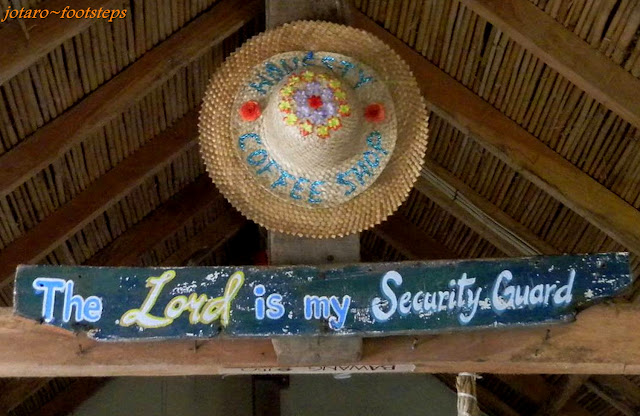 
You are at - Jotaro's Blog / Footsteps / Philippines 2015 Batanes-Sites / Honesty Cafe @ Batanes, Philippines
If you like this, view my other blogs at Jotaro's Blog
(comments most welcomed below. if you like this pls share via Facebook or Twitter)
Posted by Jotaro Zen at 9:52 PM No comments: 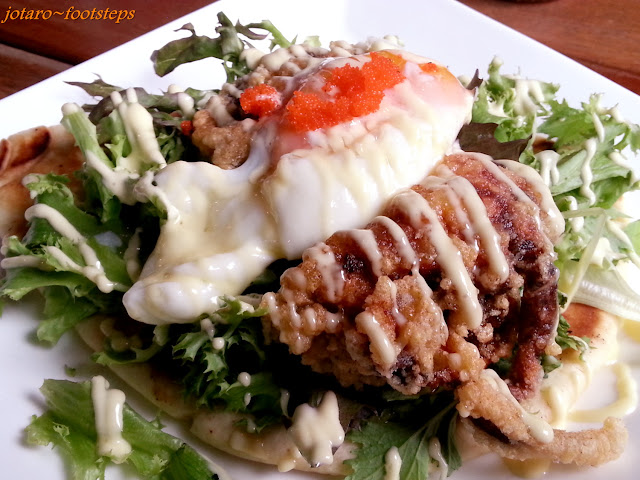 Fusion eats places seems to be sprouting, perhaps it's because the world has become more open. Or perhaps people now travel more and have acquired a taste for foreign food but somehow want something more. Fusion food gives a medley of tastes from different places blended nicely into a new flavour. Some eateries have done it rather well, such a place is the Good Batch. 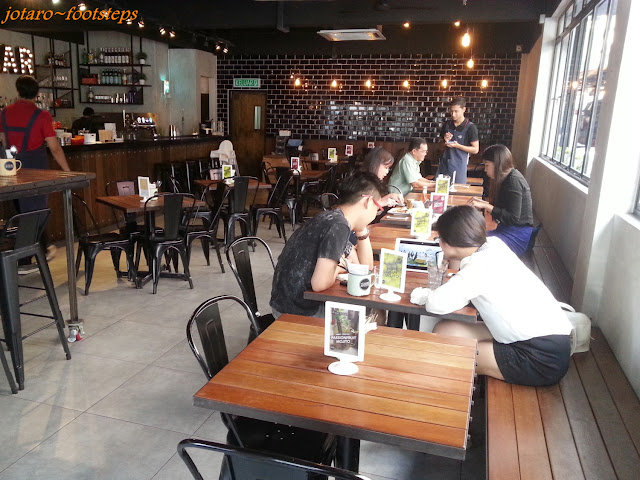 A friend and me were looking for a place to chat and catch up on our lives after not having seen each other for months. The Good Batch seems like a nice place to do just that; cozy, quiet and with good that is good but not too overwhelming to get in the way of conversation. 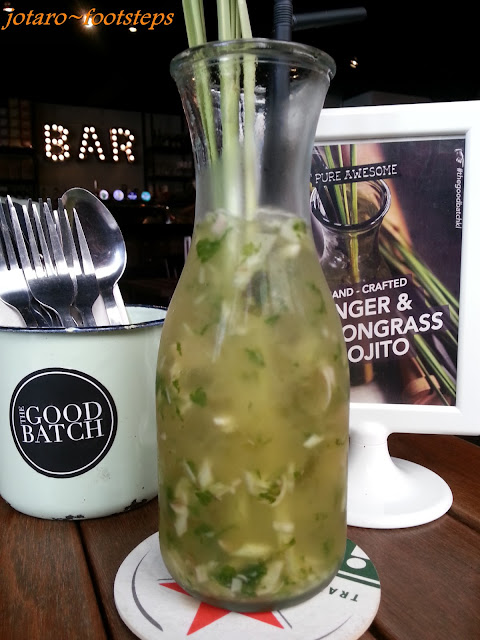 We kicked off with a couple of drinks. The Ginger & Lemongrass Mojito packed a punch, one of a biting taste of ginger with the aromatic lemongrass. Fused together these two flavours is sure to wake up one's senses. 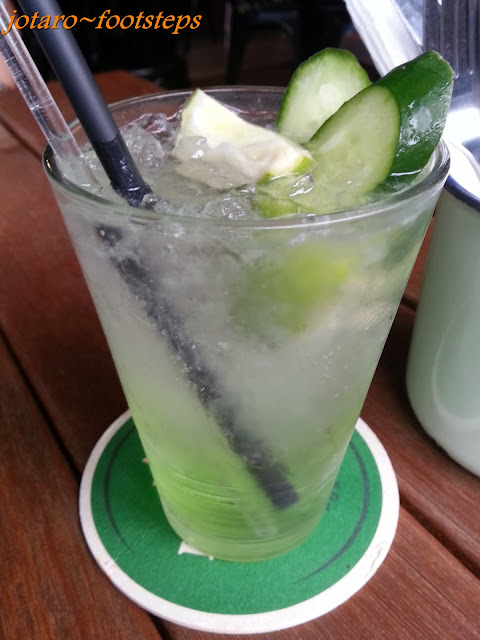 Wanting something subtle and cooling for the warm afternoon, I went for the Cucumber-Lime Soda. I thought it would be blended cucumber juice, but what came was mainly soda with a twist of lime juice added with hardly any taste of the cucumber; a bit of a disappointment this one. Let's hope the food will make up for it. 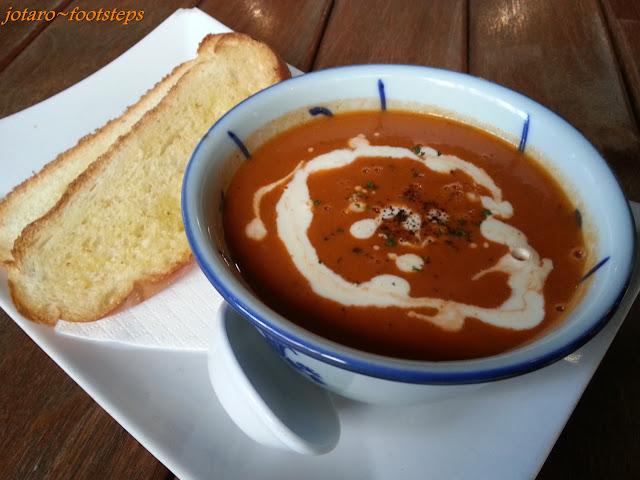 Yes! The food did more than make up for it, starting with this prawn bisque. Using prawns instead of lobsters is a good idea as prawns has... er ... more prawny taste than lobsters. It came out very well not overly sourish and just nicely sweet.
And they came with pieces of fairly large-sized prawns and not those minuscule shrimps. 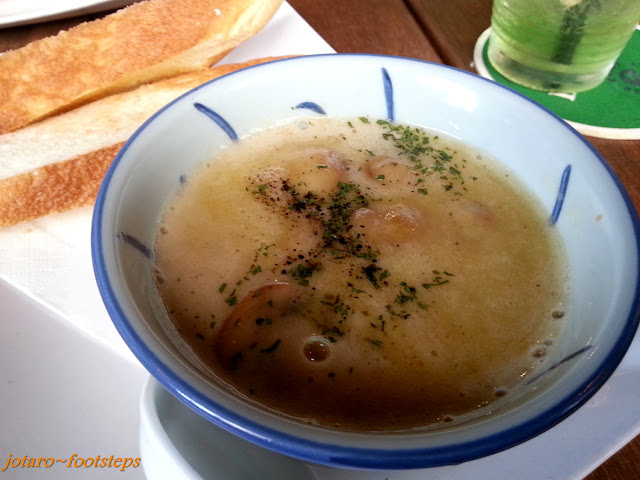 The mushroom soup was also good, a concoction of blended mushrooms with half-slices of button mushrooms to give something to bite into.
Both soups came with two slices of toasted bread; there were rather large slices by the time we finished with them we were half full. The mushroom soup was a tad salty, drank part way and the dipped the bread into the rest to tone down the saltiness. 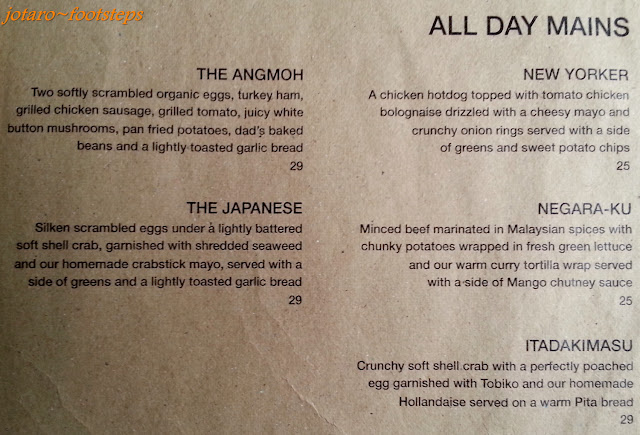 Ordering at the Good Batch is also easy, the names on the menu do give some idea of what one is getting; and a brief description clears any doubts. 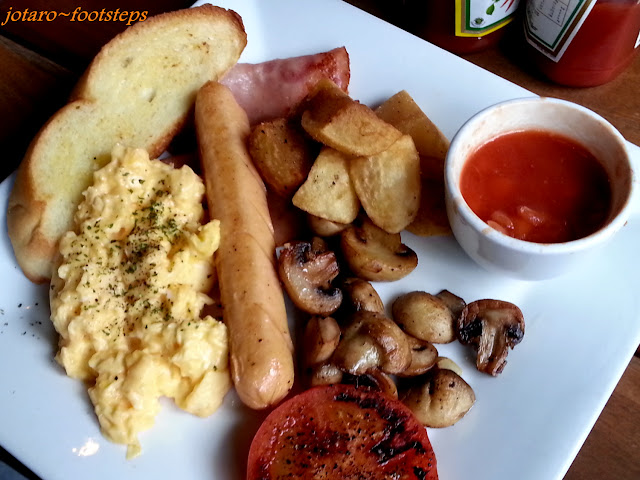 My friend went for the Angmoh; literally meaning red-hair in Hokkien, a local way of calling Westerners. So he knew that he would be getting something British.
It was definitely British - a sausage and a slice of ham coming with scrambled eggs and a little bowl of baked beans! And of course there were the thick potato chips. 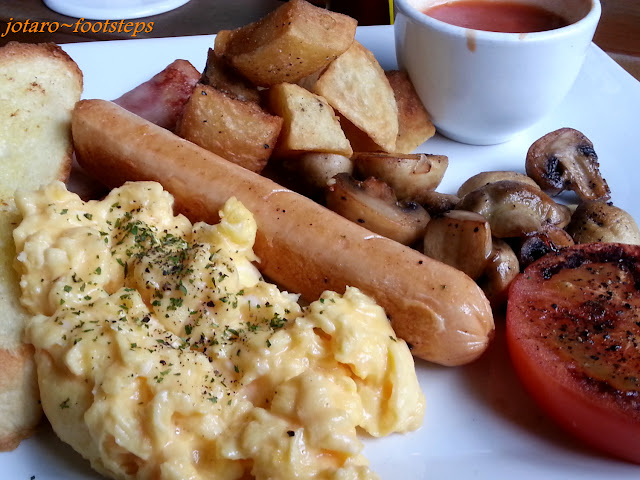 The scramble eggs were wonderful, still having that yolky wetness for an eggsy taste. The sautéed button mushrooms balanced of the dry chips, and pour in the baked beans onto the toast and all is perfect... almost; the beans could do with a bit of fried garlic-oil. 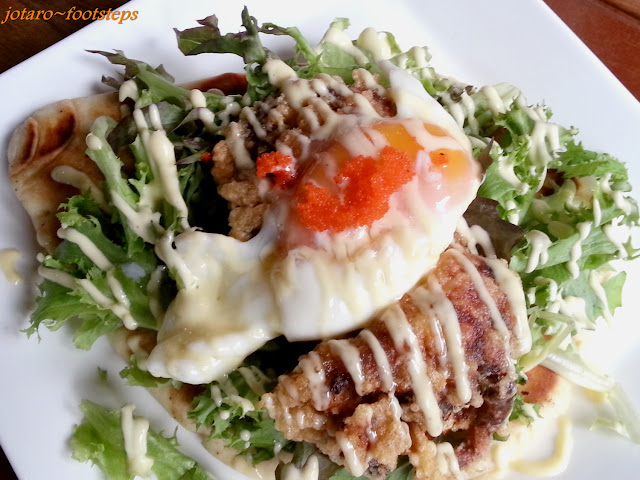 Now the Itadakamasu is as interesting a dish as it sounds. It came in layers of the world, starting with Japanese Tobiko roe at the top followed by a layer of British poached eggs lazily flopping down on some Malaysian deep-fried soft-shell crabs which sat on top of a carpet of salad. Right at the bottom was a piece of Mediterranean pita bread.
This is real fusion for you. 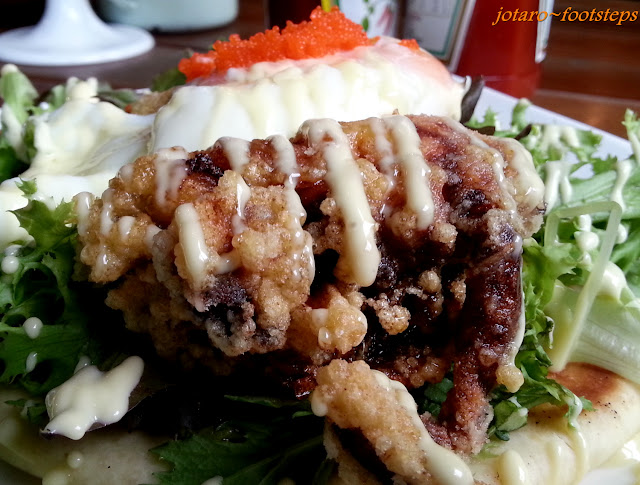 This is a perfect combo. As one cuts into the crabs, the egg breaks and the runny yolk flows down onto the crispy crabs inundating them with yolky flavours. The Tobiko is small buy yet breaks open to reveal the aroma of the sea. 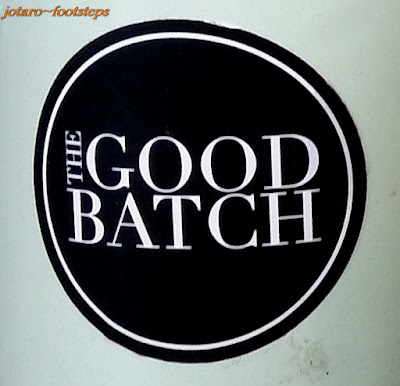 You are at - Jotaro's Blog / FootSteps / YummY! / Western & Fusion Food / Japanese Soft Shell Crabs @ The Good Batc
If you like this, view my other blogs at Jotaro's Blog
(comments most welcomed. if you like this pls share via facebook or twitter)
Posted by Jotaro Zen at 6:51 AM No comments: