Brickfields, Kuala Lumpur, Malaysia
Vihalatchi Food Catering Restaurant professes to sell authentic Chettinad Cuisine. Me, being a non-Inidan was wondering what is Chettinad all about? This cuisine come from the south Indian state of Tamil Nadu. Hot and spicy and usually served on a banana leaf. It's the food of the Chettiars! 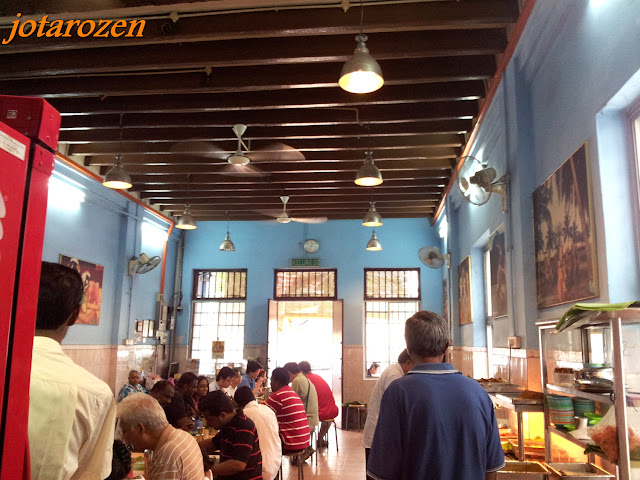 Lynn & me were in Brickfields, the Little India of Kuala Lumpur's  for some business and went to this place for lunch. We entered the restaurant, and were surprised by the crowd. The place was full and we were ushered to a small room at the back. Food must be good then. We sat down and had to wait a while before being served. The food, like any banana-leave rice restaurant is served by servers walking around with various dishes


They will approach the tables with something like 4 dishes, and ask patrons whether they want what is offered. One server will be walking around with vegetable dishes, another meat dishes and yet another fish dishes. I recognized one of the servers to be either a Burmese or an Indonesian. Surprisingly she blended in quiet well with the others, speaking fluent Tamil! She served us the vegetables. By the way, vegetables refills are free. 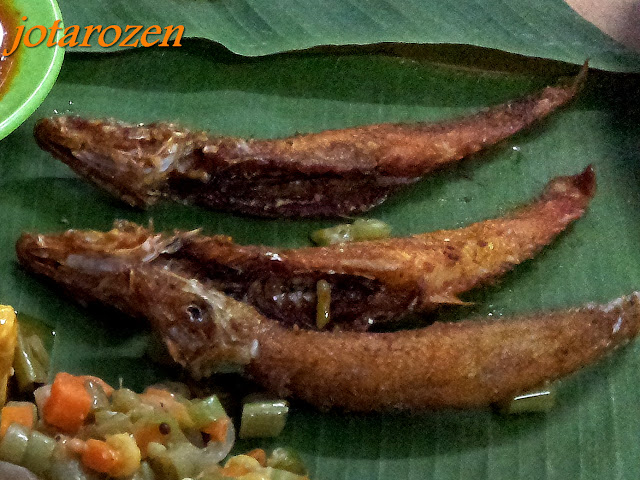 The fish fella came next, we peered at the various fishes and opted for the fried fish. It was nice, fresh and crispy.


Then came the meat server. Chicken curry, fried chicken, etc. were there for us to choose. We went for the mutton curry as it looked the most delicious. Mutton curry never fails me, always having that delightful taste and unique smell, and this one was definitely in that league.


We were then asked for our choice of rice, Lynn ordered the plain Biryani rice. I went for the plain white rice, as I wanted to savor the tastes of the curries without any other tactile distractions.


A cup of water each was served with the course, but we ordered additional Plain Yogurt and Plain Iced Lassi. They also have Mango Lassi. 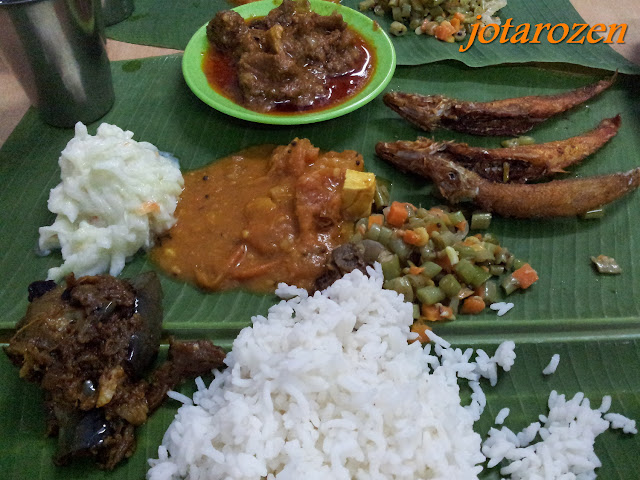 The meal was good. I liked the vegetables especially the fried spicy brinjals (eggplant). Some patrons, being vegetarians will just order vegetables dishes. Some banana leaf restaurants are purely vegetarian. The fish went well with the rice and the mutton curry enhanced the overall flavor. I recommend that one should take the yogurt or lassi, as they will cool down the body after such a spicy meal. Burp!


Vishalatchi has a good spread of dishes on its menu. There are several types of curriies - fish, chicken, mutton, prawns. Also on the menu are fried fish (of several varieties), fried chicken, fried squid, chicken in soy sauce, eggs, vegetables etc. 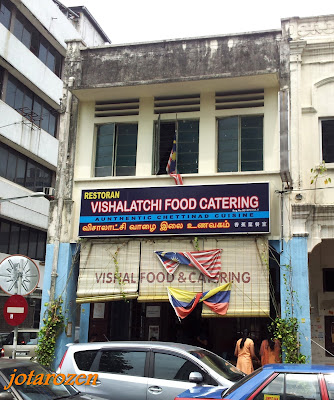 5. Value For Money :
(Rated 6/10) - Pricing average, but some locals may say slightly expensive.


You are at - Jotaro's Blog / FootSteps / YummY! / Malay & Indian Food / Vishalatchi Banana Leaf Rice
If you like this, view my other blogs at Jotaro's Blog
(comments most welcomed. if you like this pls share via facebook or twitter)
Posted by Jotaro Zen at 11:16 AM No comments:

These are nice photos I took, but which were not included in my travel blog .Japan - Kyoto/Osaka : May 2012. Enjoy.


You are at - Jotaro's Blog / Footsteps / Photo Gallery / Japan : Kyoto & Osaka
If you like this, view my other blogs at Jotaro's Blog
(comments most welcomed below. if you like this pls share via Facebook or Twitter)
Posted by Jotaro Zen at 8:18 AM No comments: 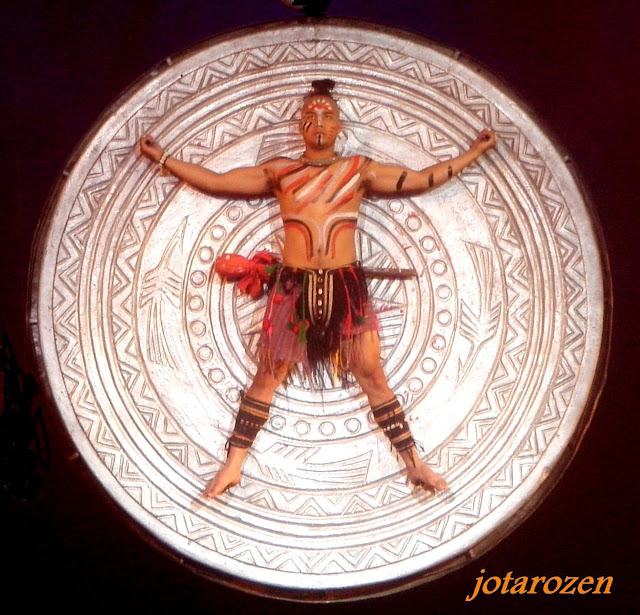 Before we venture forth, first a bit about the culture and geography of the place. This will give a better insight into my experiences in this journey.

Yunnan. The name itself conjures up a mystery. The place itself is full of culture, life, variety & dynamic-ism. But if one look beyond what has been put forth to tourist, beyond the colorful tribal dresses, the mystery of the place is still there. Even in ancient China, tales abound about the southern tribes, full of magic and mysticism.

Yunan located in Southern China, to its south is Vietnam & Laos. To the west is Burma and to the north-west is Tibet. It reaches almost to India's Arunachai & Assam provinces. It is perhaps of this central location amid its cultural neighbors that have given rise to the richness in the culture of the place. Yes, Yunnan has its modern cities & highways; but the region has maintained it's old charm of colorful and diversified tribes. Out of China's 53 minority ethnic groups, almost half of them are found in Yunnan, most still practicing the old customs and wearing their beautiful tribal dresses. Okay then, let's get on with my travels.

Day 1 : 24th August 2011
We flew with Malyasian Airlines from the Kuala Lumpur International Airport to Kunming a 3-hr flight, reaching there just after noon. This was a private guided tour, so we were met by a couple of English speaking guides. Thank God! I am a Chinese Banana and can't hardly speak Mandarin.


We boarded our tour bus and headed to Kunming City for lunch. Surprisingly, quite a number of the buildings didn't look Chinese at all. Are we in China? Yunnan is starting to give us a different viewpoint of China - China is not all Chinese!


We proceeded on the 2-hour's journey to the Stone Forest. What a strange name, and it conjured fantasized images in my mind - trees carved out of stones? Petrified forests?


But as we neared our destination, things became clearer. We saw natural stone columns, tall & slender sticking out from the ground - multitudes of them among the green landscape. And these weren't even the big ones as they are only about 30ft high, explained the guide.


These preliminary views, whetted our curiosity and we held in our eagerness to reach Shilin, the location of the Stone Forest. A picturesque park greeted us at the entrance to the site.


Further in, we started to see bigger and taller rocks. This glimpse drew us further in. 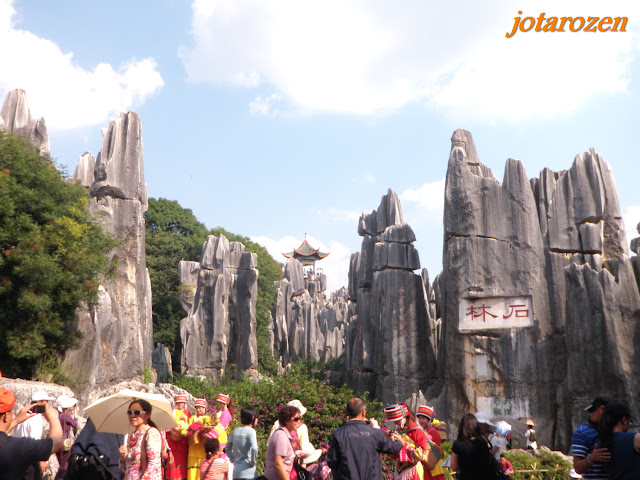 The tall and colossal stones awed us, some of them reaching taller than 100ft. There were so many of them, even more than the real trees.


And also in many strange formation. This is truly a Stone Forest, a sight that has earned its place in the UNESCO Heritage Site List. 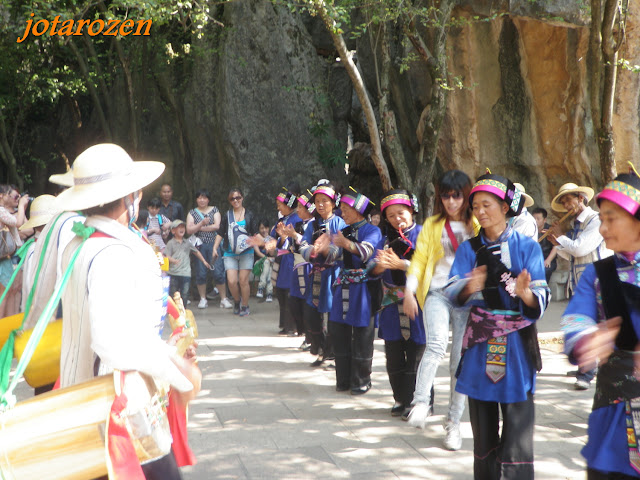 In one recess area, some tribal ladies dance to music by their male counterparts. A display of tribal culture that would be a start to our Tribal Adventures. The Stone Forest is fairly large and a walk around it would take around 2-3 hours.

We left the place, had dinner and was taken to the Hundred Tiger Boulevard - a wide avenue with embossed floor carvings of all sorts of Tigers, some from ancient China Legends. There we saw the "Thousand People Left Foot Dance". It was nothing but line dancing by many residents of the area - not that interesting, so no pictures.

We checked in to the Jinli Hotel in Alu, Luxi for the night.