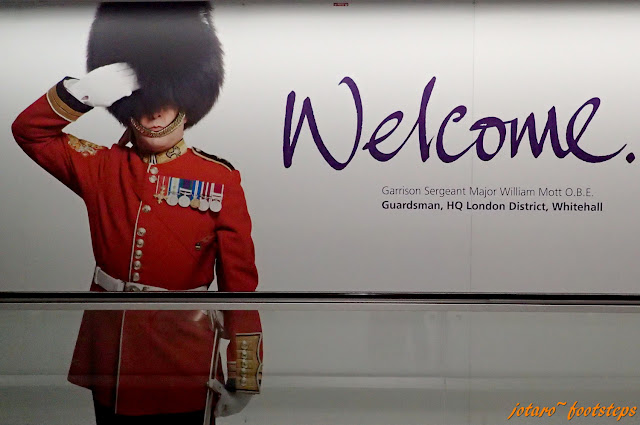 We started our holidays with five nights in London. I had always been apprehensive about London, hearing much talk about it's moody weather, and that it's rainy and wet oft times. But our days spent there change my mind, and changed it drastically, an about turn actually. With this few days introduction to the city and loving it, I hope to be able to visit it again for a longer period, and perhaps explore more of the the United Kingdom too.

But before I go rambling further, here are some London Travelling Tips:
1. We stayed connected using a pocket wifi which we got from Travel Recommends.
2. Accommodations in the city can be expensive (especially for those from countries with poor exchange rate against the Pound Sterling). We stayed at the Travelodge King's Cross Royal Scot at about MYR360/= per night. It is quite centrally located being walking distance to the King's Cross Station which we would use frequently to travel around London. Please note that there is a charge for using the hotel wifi.
3. We travelled frequently with the Oyster Card but avoided the peak periods (Monday to Friday (except public holidays) from 06:30 to 09:30 and 16:00 to 19:00) as fares then would almost be doubled. But for today we were fortunate that a cousin drove us around a bit (a lot actually, as she also picked us up from the airport and dropped us at Camden Market). Keen on observing London life and it's scenery, we walked from Camden to our hotel at King's Cross.
4. London is a cosmopolitan city, with lot's of international food available. We did not start off with English food though, we will see pleasantly why later.
5. Points of interest for the day:
- Camden Market.
- The British Museum.

To help get orientated, above is a map showing some of our destinations for the first day. 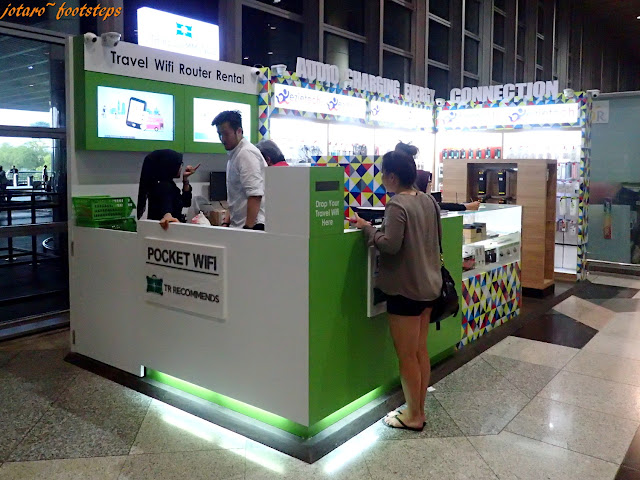 On the evening of the 3rd we eagerly left for our holidays.
But first thing first before we go flying off; we dropped by the Travel Recommends stall at the arrival hall of the Kuala Lumpur International Airport arrival hall. They are located near Door 7. This pocket wifi was for our use in Europe, which was fortunate as a few of our hotels charge for using their wifi or was difficult to log into. 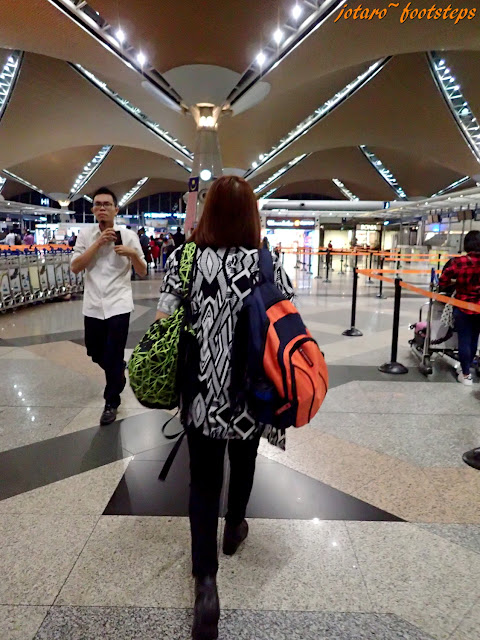 An here's Lynn strolling to board the plane with two back packs. Why two? Well, one's mine. She takes good care of me; knowing that I have a poor back and can't carry heavy loads for long, she's carrying mine too "smiles lovingly". 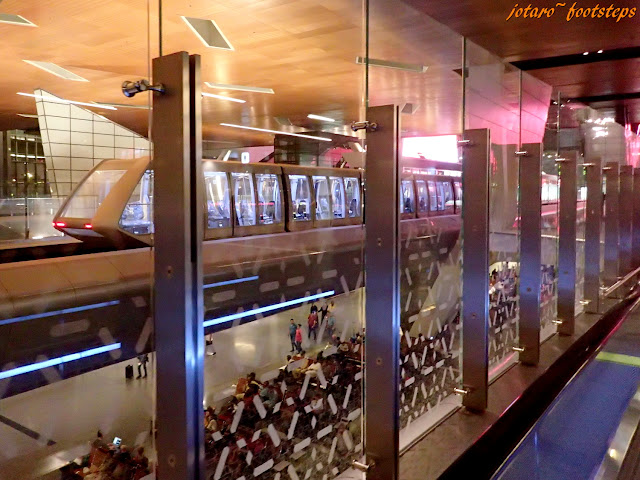 We flew Qatar Airways with a 2-hour transit lay-over at Doha. We were most impressed by their large airport, there's even a monorail that runs within the airport! 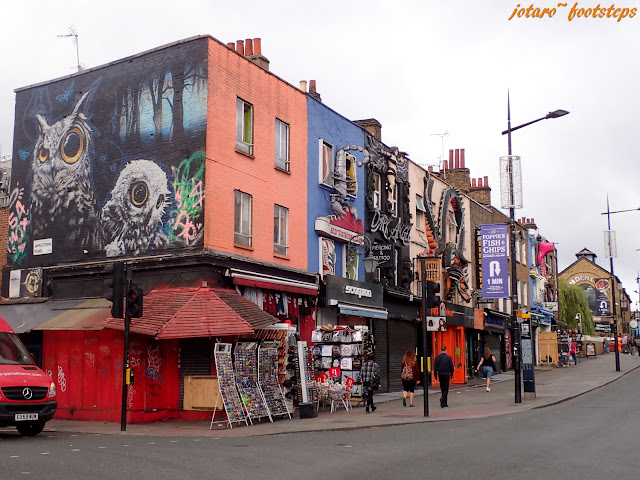 7:00am on the 4th: We arrived at Heathrow Airport Terminal Three and cousin Kat was there to pick us up. As we could not check into our hotel until three in the afternoon, we requested she dropped us off at the Camden Market, leaving our luggage in her car as we would be meeting again later in the day.
And hoppity-hop we went for our first taste of London. Yes, Camden Market is quite a touristy place, but we did not mind, after all we are tourists! And with its wide range of shops and street scenes it did give us a first glance of how international London is. They were Indians, Chinese, Turks, Armenians, Croatians, Mexicans, etc. all around. Some running clothing shops, souvenirs shops, etc.; while others were operating food shops & stalls. You name it, and one can find it here at Camden Market! 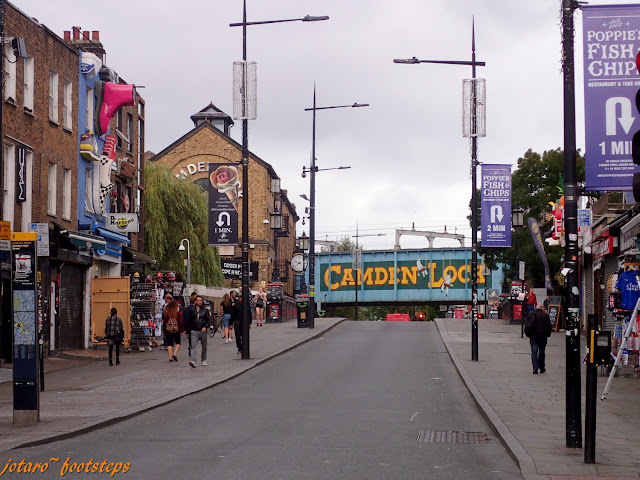 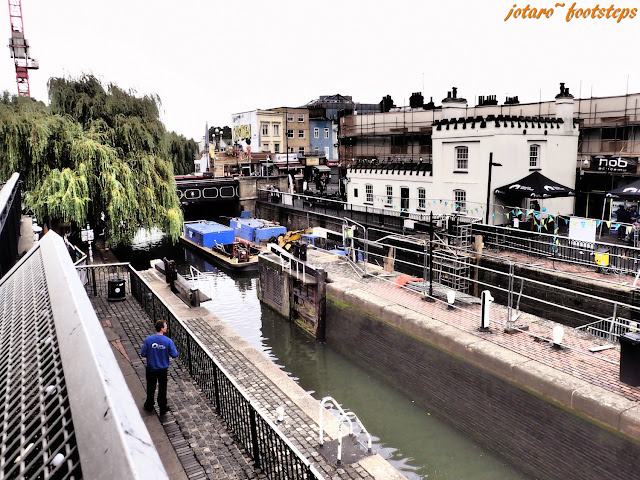 It's an functional lock that control water levels for barges to come in to deliver goods. 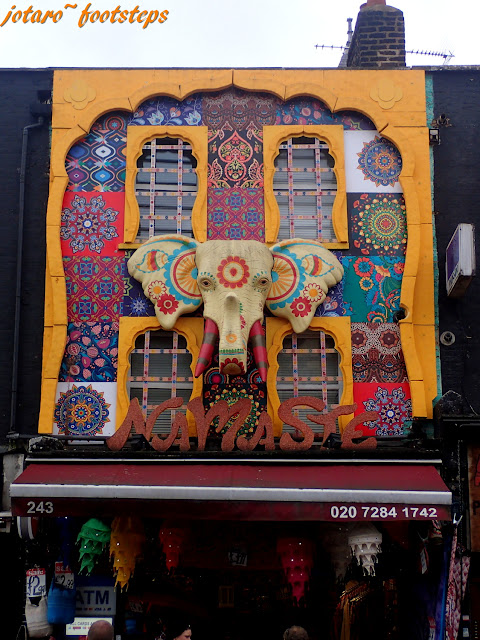 Let's have a look at some of the shops. This one here is.... Yup! You guessed it right... with an elephant head carving among colourful stylised painting, there is no doubt that this is an Indian shop. Namaste! 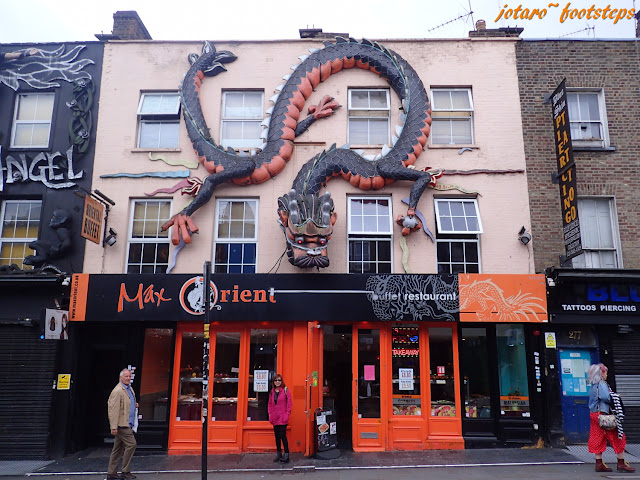 This dragon signify... a Chinese shop... what else? It's an eatery selling affordable Chinese buffet. 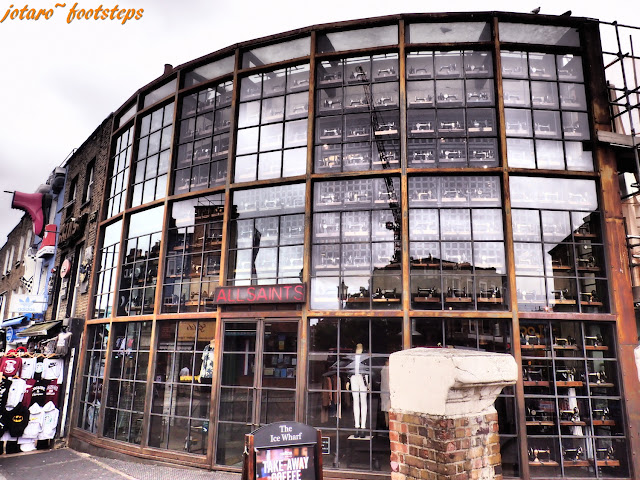 Okay... back to something English... a clothing shop with it's unique display of old sewing machines lining up the whole of it's shop front. Some of these were really old models, hand operated ones just like the one my late grannie used. It brought back memories of days with her, helping her sewing by turning the hand winch of the manual sewing machine. 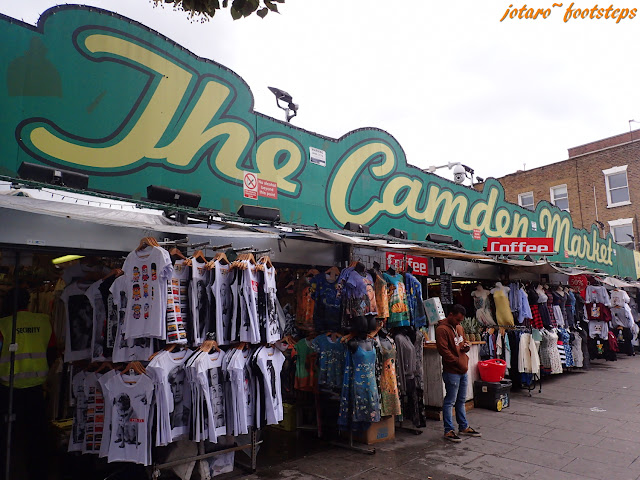 Camden Market has lots to offer, there's a bazaar section for those seeking reasonably cheap stuff... 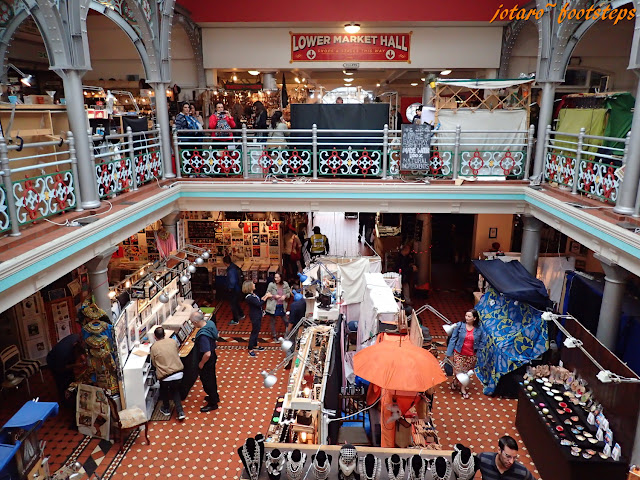 ... and also an market hall for slightly up-market goods. 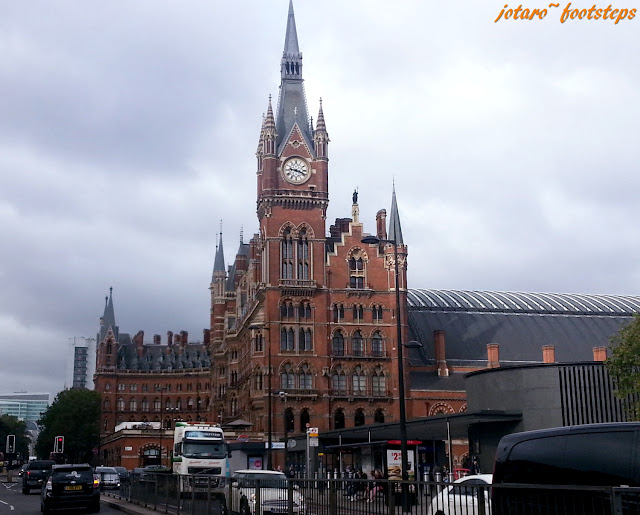 Time to hoppity-hop off again. We decided to take a long walk to our hotel, it's almost time to check in. Along the way we took a short detour to the St. Pancras International Railway Station to check it out as we would be using it days later when we cross over to France.
The front of the station has a very impressive red-bricked building with a looming clock tower. This building was almost torn down when the new station was constructed, thank goodness they had the good sense to maintain the old building as a fronting facade, and it is now a very noticeable landmark.
For more on the St. Pancras colourful history, click here.
For more of the building design/architecture, click here. 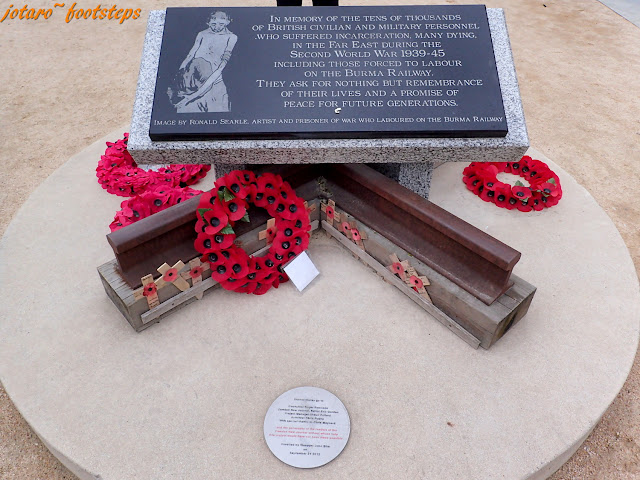 As we walked along, we noticed many war memorials, there's almost one at every street. The British has a long history with millenniums of strive within the islands, and centuries of wars with other countries during the glorious days of the British Empire to bring them to what they are today.
The above memorial is dedicated to the soldiers and civilians who were incarcerated or died at the hands of the Japanese Imperial Army during the forced labour construction of the Burma Death Railway that connected the Malay Peninsular to Burma and almost onward to China. This had a special meaning to me as some of my countrymen were those affected. We stopped to say a silent prayer here. 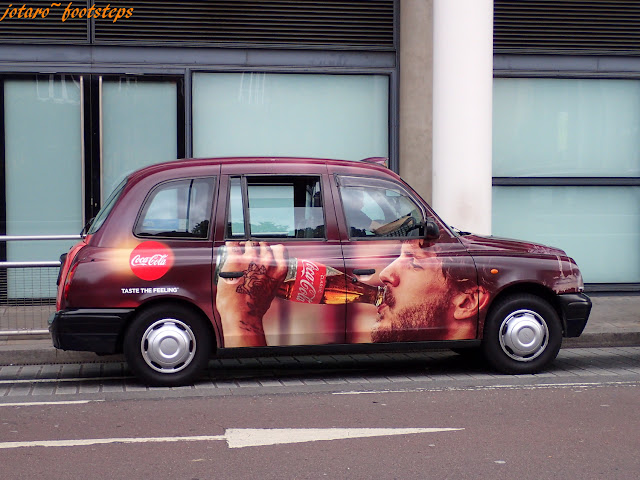 London's renown cab has evolved from its dull, sober black look. Now many have colourful adverts painted onto them; looking very cool like this one with a Coca-cola advert. Yeah! This is a real cool thing!
Although some of the older and more staunch English may just yet say, "We don't do these things, we are English!".


Checked in to our hotel and refreshed, it's hoppity-hop out again as we headed for The British Museum. Per Trip Advisor, this is the No. 1 place to visit when in London; and I must agree as the museum is huge and displays thousands of artefacts that traces the roots and journey of man (from the British point of view) from olden days right up to the present. Walking down the hallways and corridors of the museum is like a trip through a time tunnel that takes us through aeons of Man's history, passing by civilisations after civilisations. 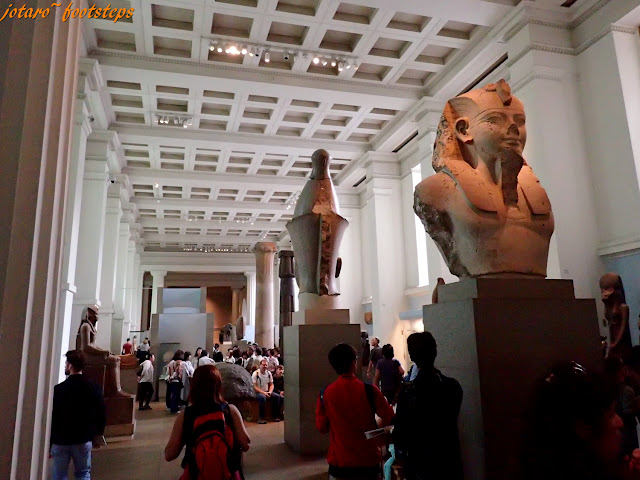 The Ancient Egypt section with statues and busts of pharaohs... 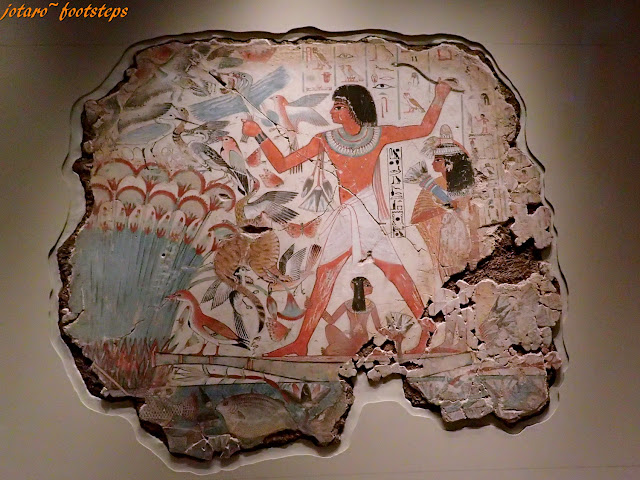 ... and wall panel painting extracted from the pyramids ... 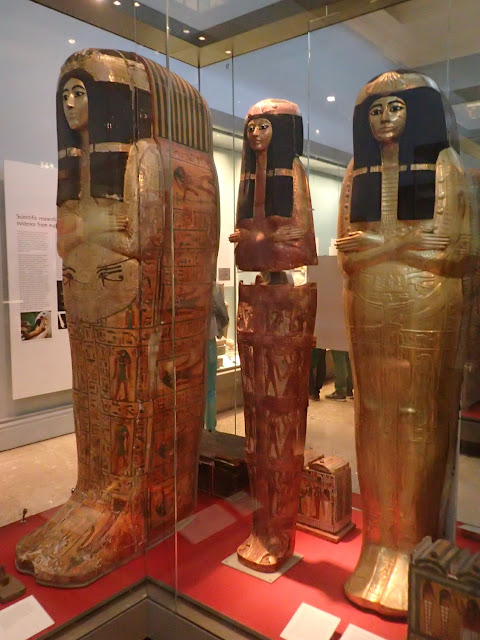 ... and sarcophagus of female mummies. 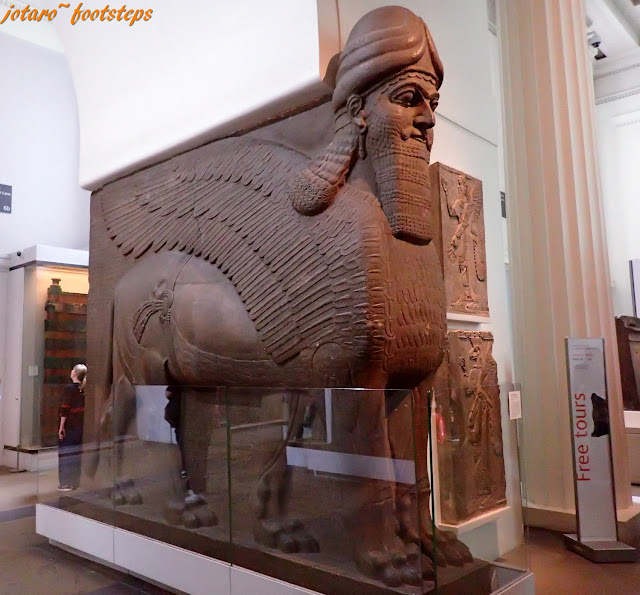 Back to an earlier period, the Assyrian empire of Mesopotamia; this is a man-headed lion red-sandstone statue. Was this a prelude to the Egyptian and Grecian sphinx? 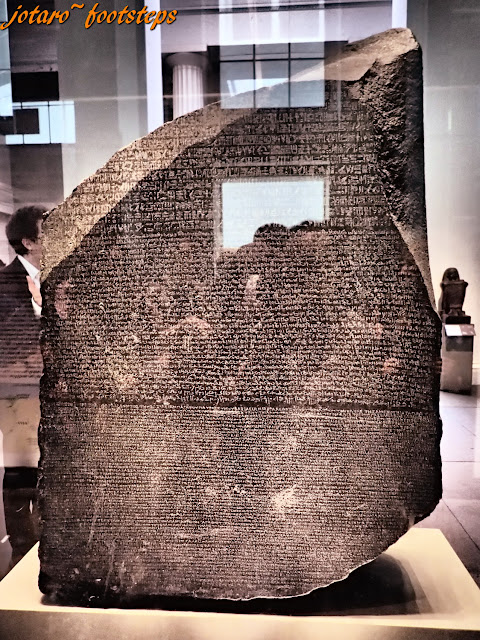 Not to be missed: the Rosetta Stone, a watershed archaeological find that allowed historians to translate many old documents to trace the history of mankind's civilisations around the Mediterranean Sea. 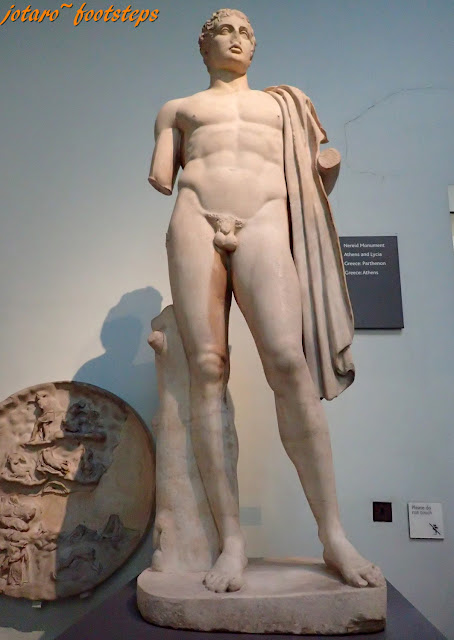 A Roman-Grecian statue. Oops! His pee-pee thingy is missing!
This was quite common of some statues; there's some probable reasons behind this. During a later period of the Holy Roman Empire, and the British Victorian era, statues with exposed penises were considered vulgar and many of the penises were cut off (totally and not just circumcised); others had their offending parts covered with metal fig leaves. 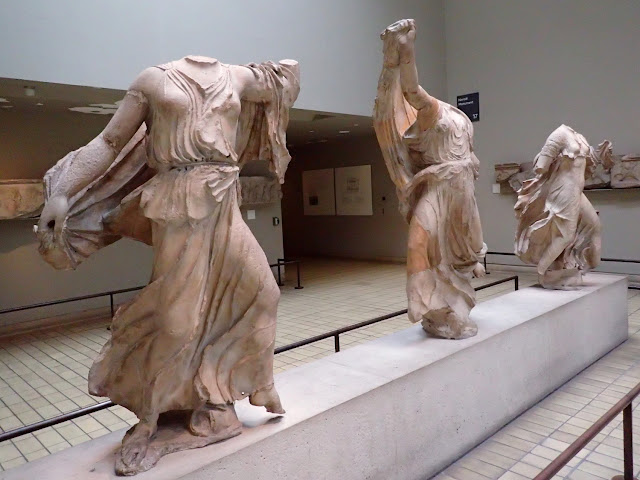 The Three Nereids from the Roman-Grecian period too. Let's hope that these ladies did not "lose their heads" over the guy with the missing pee-pee.
On a serious note, the three 4th Century B.C marble statues are from the Nereid Monument of Xanthos; they are the three nymphs daughter of the sea god Nereus and his wife Doris (Hmmm, Doris is not such a new name after all). 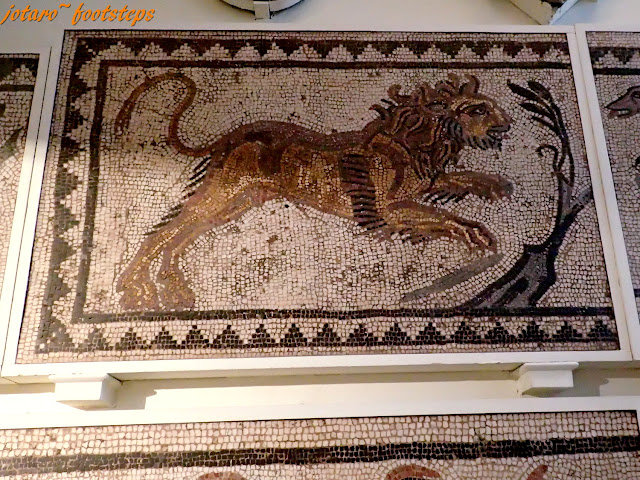 Mosaic tiled floor panel of a lion; form a Roman household in the British Isles. 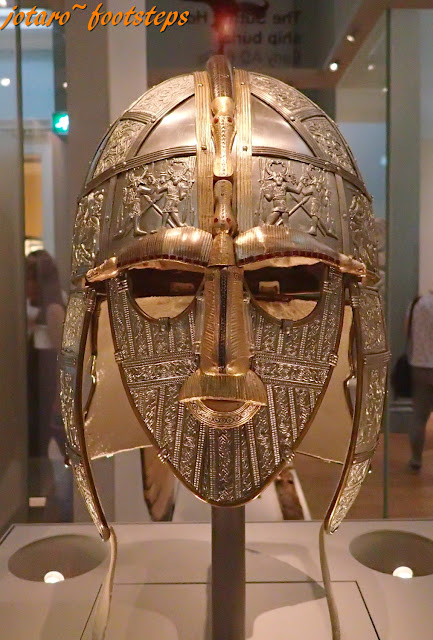 A Sutton-Hoo helmet from the Anglo-Saxon England medieval period. 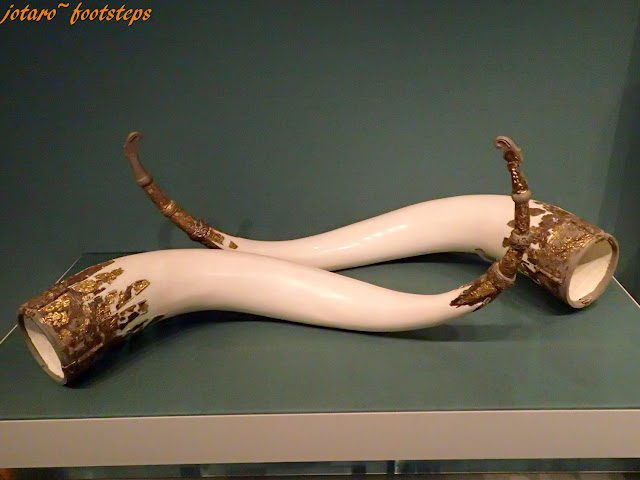 Reconstructed auroch drinking horns from Medieval Britain. The aurochs (an ox-like animal) were extinct from the British Isles, so these were probably from the continent. 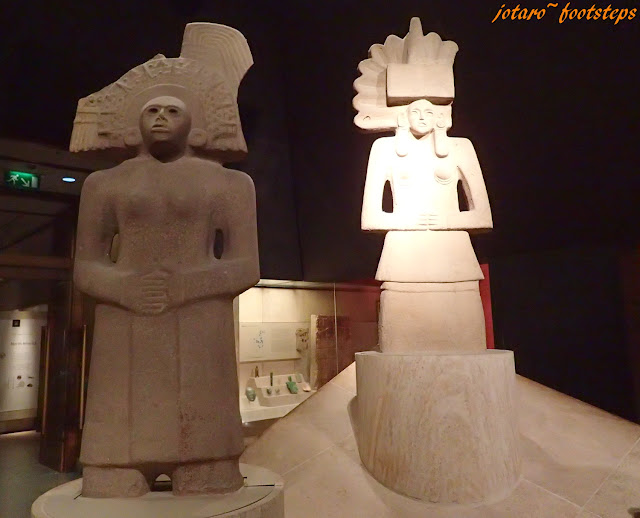 Now we cross the ocean over to the Central Americas; these are Huaxtec stone statues of female deities of the Aztec Empire. And the upwards to North America - a buckskin Red Indian dress. 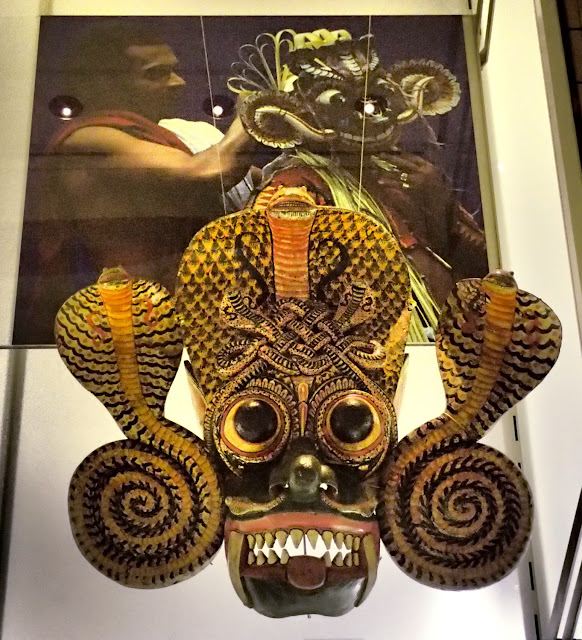 Across the ocean for another Indian artefact; not Red Indian but Asiatic Indian. This is a medicinal dance mask. 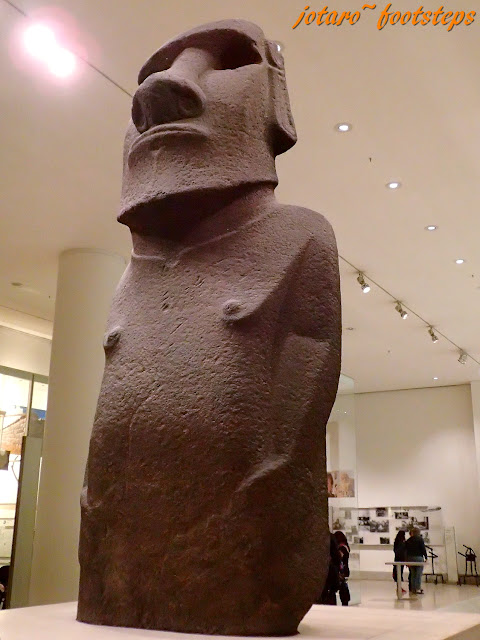 Back down to the South Pacific; one of the Easter Island stone statues. 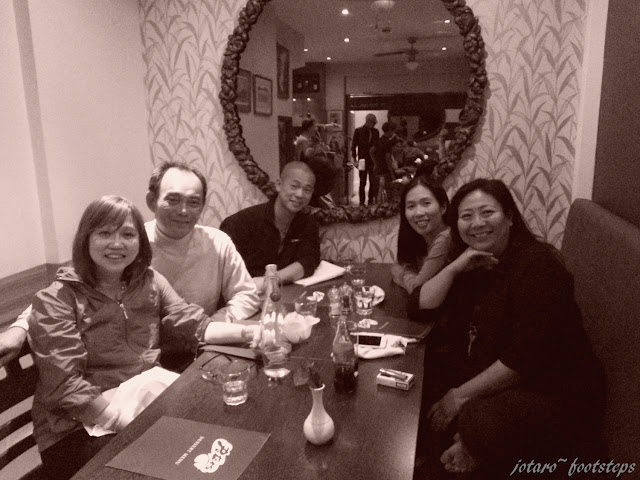 After that long history lesson, Kat picked us up and we zoomed over to South Hampstead for a reunion dinner at Peter's Ristorante Pizzeria. Truth be told, their food was good; but it was overshadowed by meeting up with my cousins; we had a good chat recollecting our younger times (okay, okay I am old but they are not ಠ╭╮ಠ ).

It's been a long day, one of a long journey, one of markets, museums and reunions. Can't wait for tomorrow!