George Town, Penang Malaysia - March 2016
This is another temple dedicated to the Goddess Kuan Yin. It is not to be mistaken for the renown Kuan Im Teng in Jalan Masjid India and it's proper name is the Hean Boo Thean. Although not so well known, it stands on its own as it is a distinct temple that sits on piers over the sea and seems to look like a floating temple during high tide.
The best view is from the sea and one would have to take a boat to get a good view of the temple. Fortunately, Google Street Maps also have features of views from the sea, the above is a photo grab from Google Street View, a good view although not that clear. 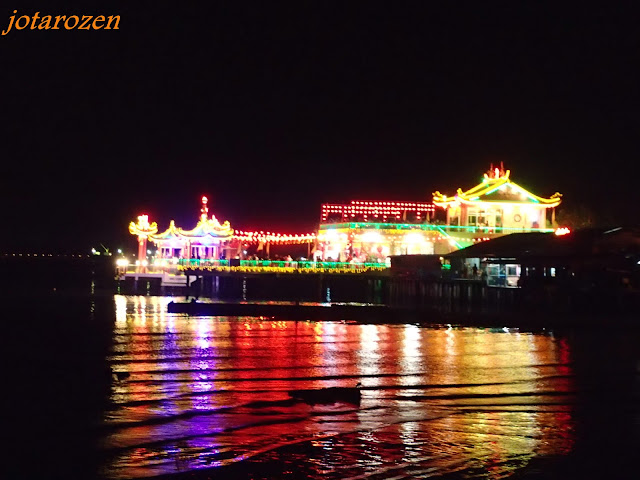 Many have seen this temple from afar but would not know which temple it is. I myself caught a glimpse of it from one of the clan jetties. I saw this beautifully lit and colourful temple while I was attending the Jade Emperor's Birthday (Pai Ti Kong) celebration at Weld Quay a couple of years back (... see blog); my curiosity tickled and it was only now that I got a chance to visit it. 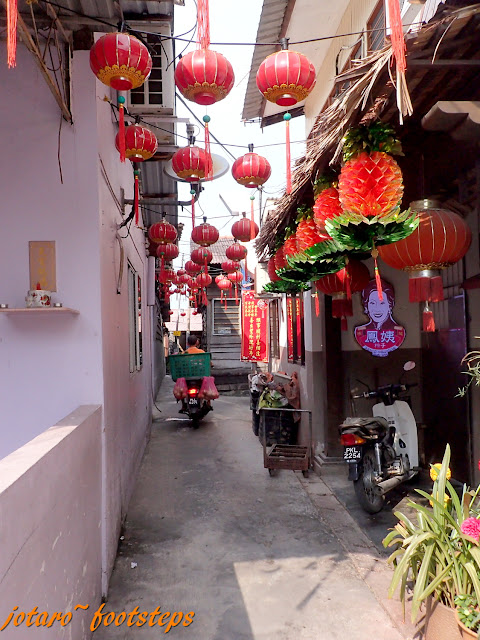 For the uninitiated, finding and getting to the temple is not easy though. I was at the Seven-streets Precint asking for directions to the temple, the answer I got from many stumped me: "There are many temples around here, which one do you want to find?" Not knowing what was the name of the temple, I could only describe it as one by the sea which can be seen from the clan jetties... "Oh, there are a couple of temples which can be seen from there" was the answer. I just asked for the biggest one and got directions. Unfortunately for me, I was coming in not from the usual access and had to weave my ways through streets that became narrower and narrower until they became in accessible to cars. Fortunately, I was cycling.
The easier way, is to come in through Lebuhraya Raya Merdeka, it's a wide junction at Weld Quay about a couple of hundred metres away from the last clan jetty (i.e. mixed clan jetty). From there just follow the red lanterns that hang over the streets! As the streets narrows, you will be walking through concrete lanes lined with timber houses sitting above the sea (similar to those at the clan jetties). 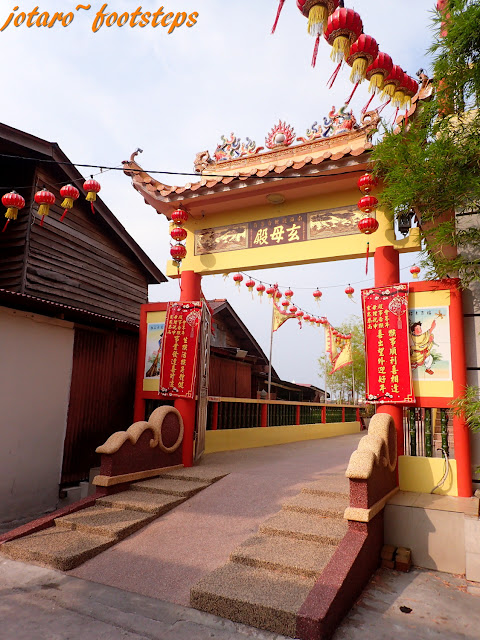 The narrow lanes lead to a small archway, one that is not that prominent but stands out among the squatter timber housing. Don't get the wrong impression though, this is actually the entrance to the rear of the temple.... there is no front entrance. 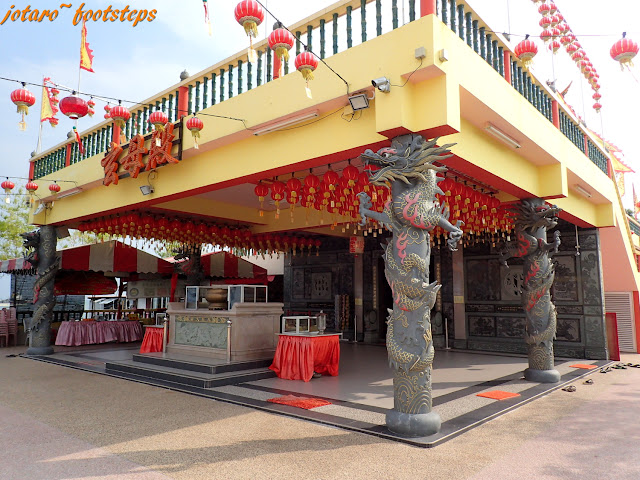 The little entrance led to a large platform, the lower platform. Four dragon columns hold up smaller platform sit atop this and provide cover for a foyer and prayer hall. 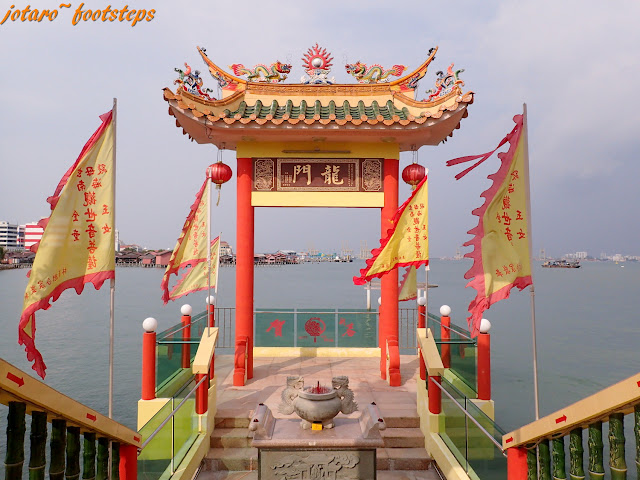 From the large open section of the lower platform stairs lead town to a small archway, one with a beautiful view of the sea with ships and boats sailing pass. 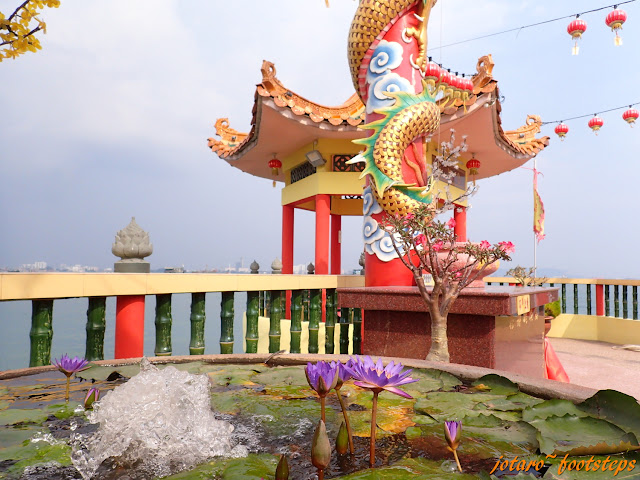 At the centre is a small lily fountain that gives a peep of a small pavilion jutting outwards into the sea. 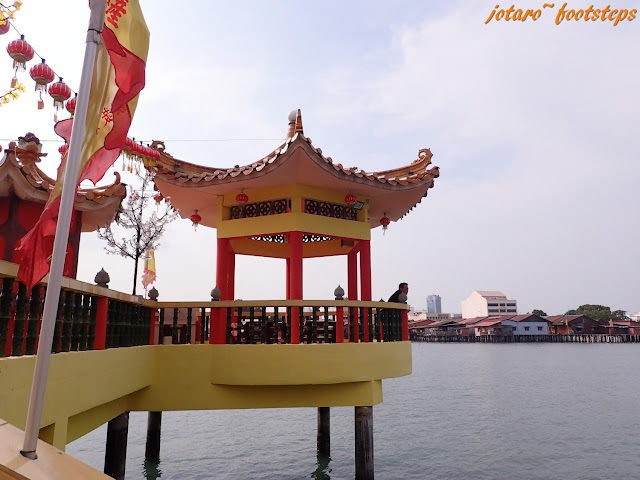 On the left is a similar pavilion. 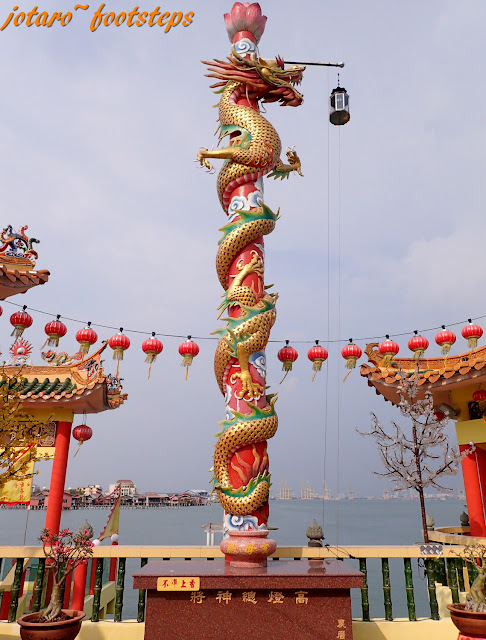 To one side is a tall lantern column with a golden dragon curling around it, it's mouth seemingly chasing the lantern. A pink lotus bloom sits atop the column. 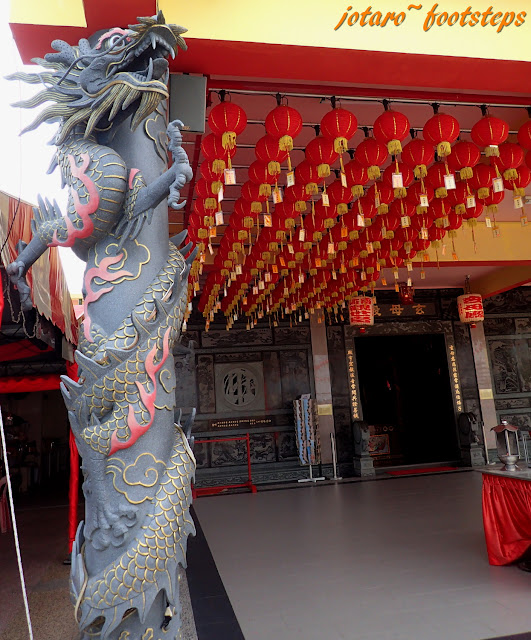 A closer view of one of the granite dragon columns. 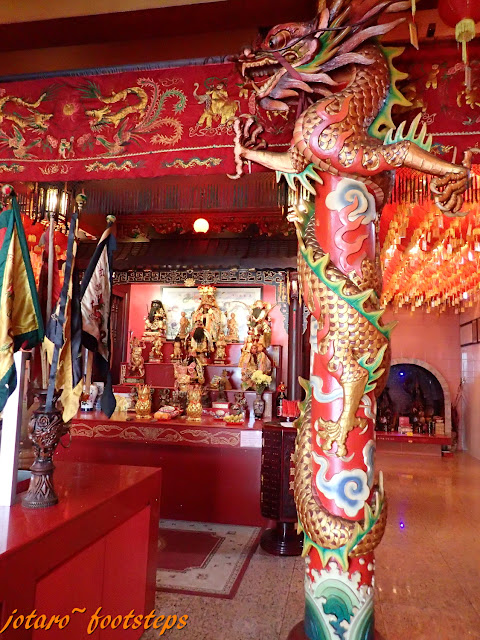 Inside is the prayer hall with the Jade Emperor altar, two dragons guard this altar. 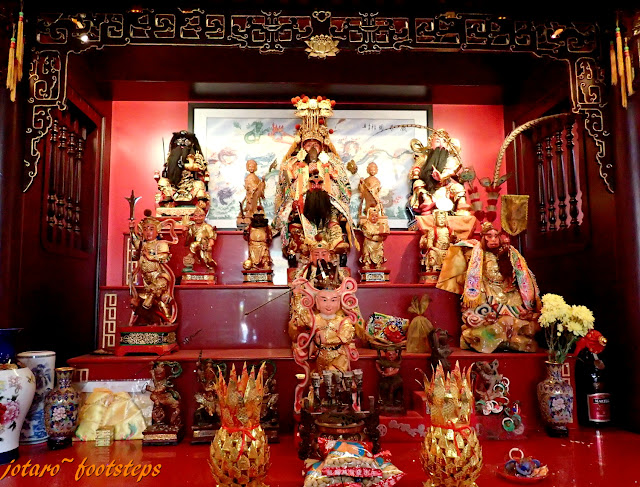 A closer view of the Jade Emperor altar. The god is surrounded by other deities. 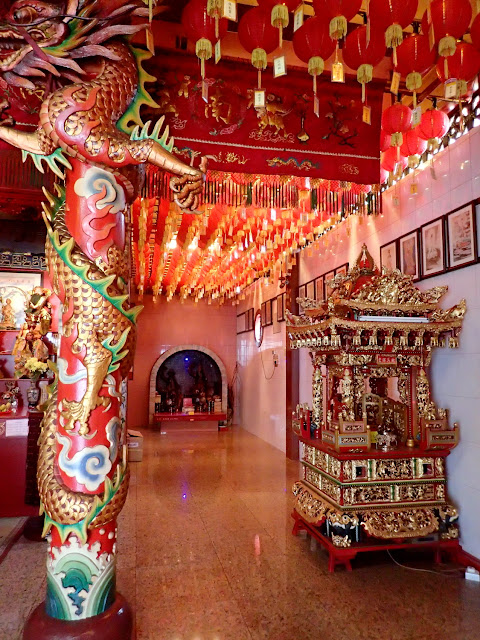 On the other of the column is a sedan that is carried during the Jade Emperor's birthday, i.e. on the ninth day of the lunar new year. This is during a procession at Weld Quay on the eve, i.e. the night of the eighth day. 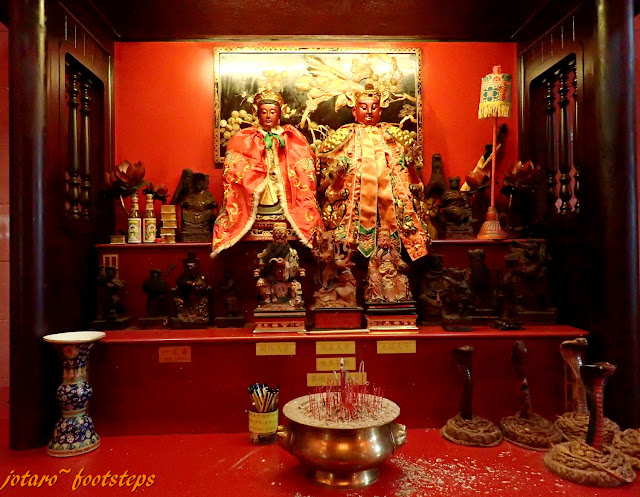 Behind the main altar is an inner sanctum which holds several altars dedicated to other gods. 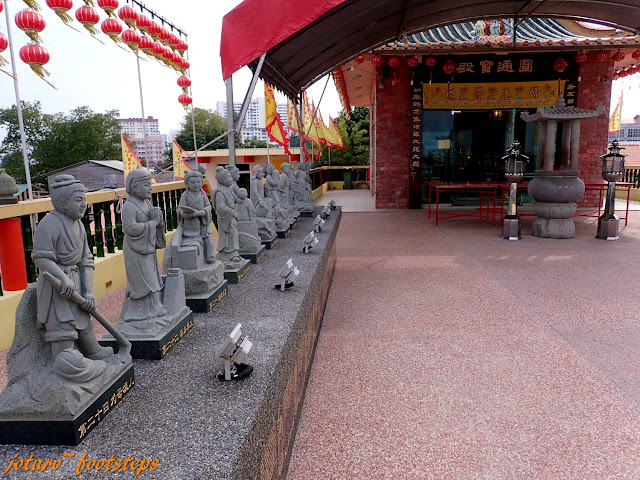 A set of small stairs at the rear of the lower platform leads up to the upper platform. At the open section of this platform are lined (twelve on each side) statues depicting filial piety. 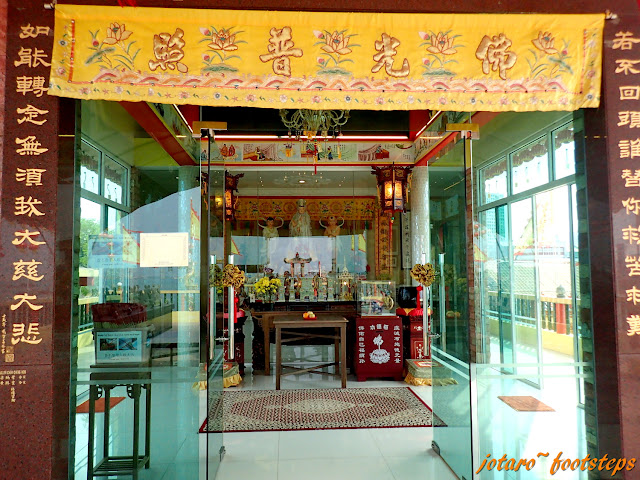 A the rear is a small hall holding the shrine of Kuan Yin, the Goddess of Mercy. The walls of this shrine is made of glass on three sides, giving the goddess a superb view of the sea. 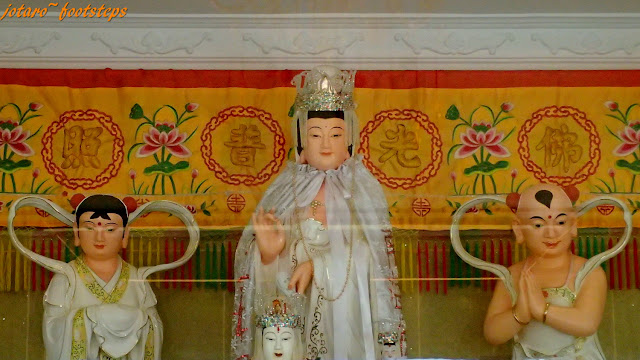 A close up view of Kuan Yin accompanied by her two hand maidens. 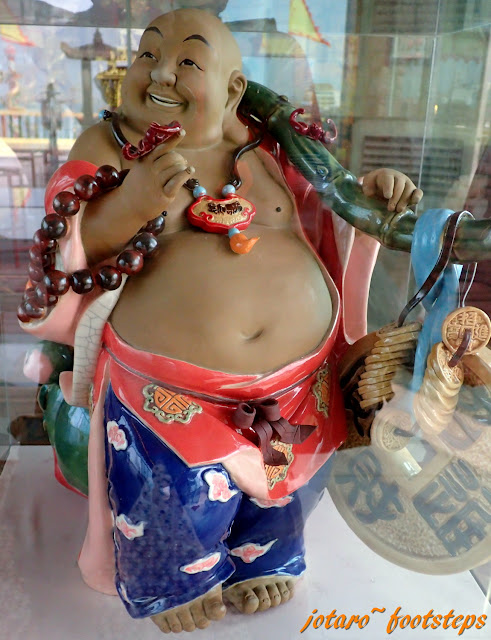 On one side of this altar is a statue of the Laughing Buddha, but one which uniquely show him standing up, carrying taels of gold. 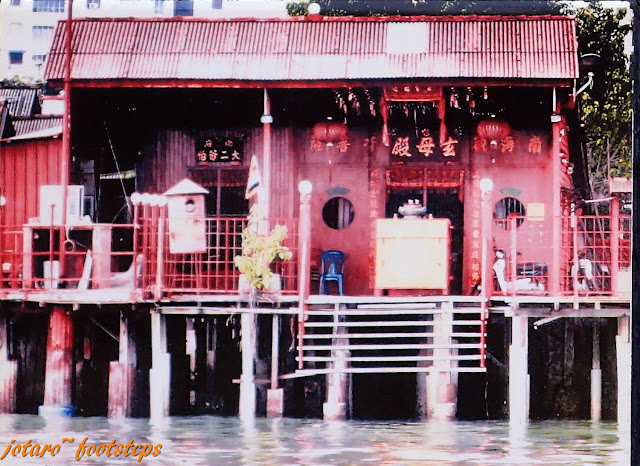 This Kuan Yin Temple is relatively new, about forty years old. The original temple, located at the same site, was made of wood. It has only recently been rebuilt. 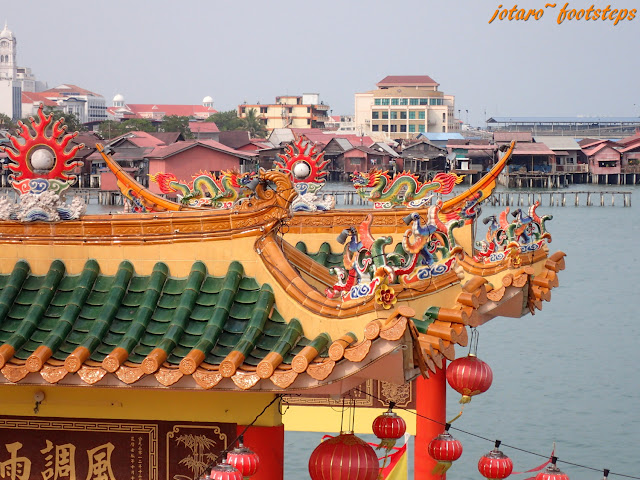 You are at - Jotaro's Blog / Footsteps / Malaysia 2016-Sites / Kuan Yin Temple @ Weld Quay, George Town
If you like this, view my other blogs at Jotaro's Blog
(comments most welcomed below. if you like this pls share via Facebook or Twitter)
Posted by Jotaro Zen at 4:29 AM No comments:

These are interesting places that I visited in Malaysia for the year 2016. Click on respective photo to view blog, happy reading: