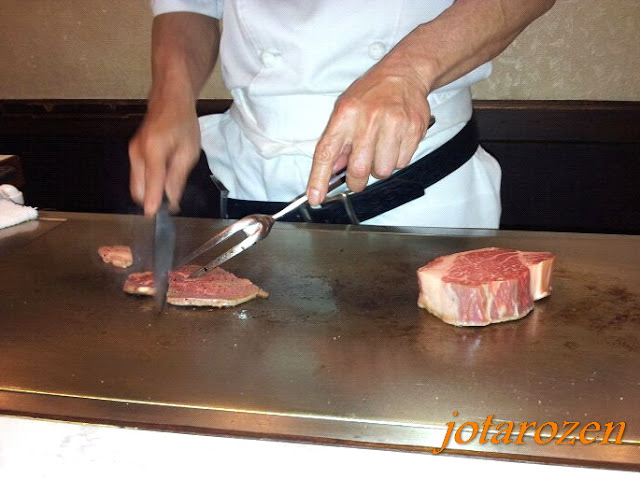 While exploring the the roads and alleys branching away from Dotonbori Street during a holiday tour in Osaka, we stumbled upon Mihara's Steakhouse.The four of us (two couples) were just looking for a place to dine. Mihara's exterior was humble and not too appealing, but the sign did say "Established Since 1978". Any place operating for close to 35yrs. couldn't be wrong. 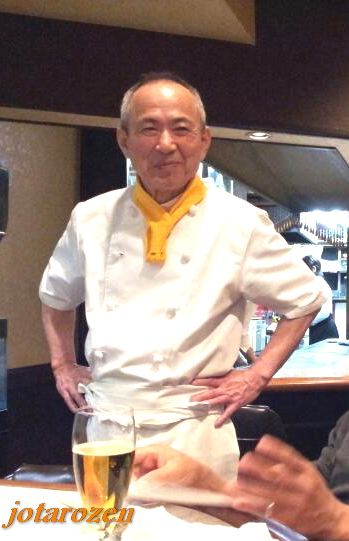 When we entered, we were greeted by no other than Mihara-san himself. He was a cheerful and chirpy gentleman who had work for a few years in New York City before returning home to his native Osaka. He still kindles fond memories of the Big Apple judging by the big poster of its skyline behind him. 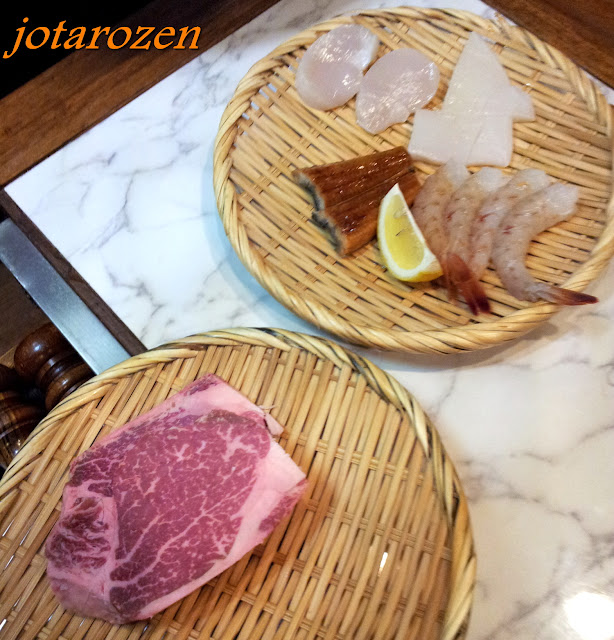 We sat down in front of the teppan grille and orderded his recommended cold cuts for starters. The main course was Wagyu Steak,  assorted seafood,  vegetables & fried rice for the main course, all done teppan-yaki style. Dessert fruits were complimentary. For drinks, it was warm sake to go well with the teppan. 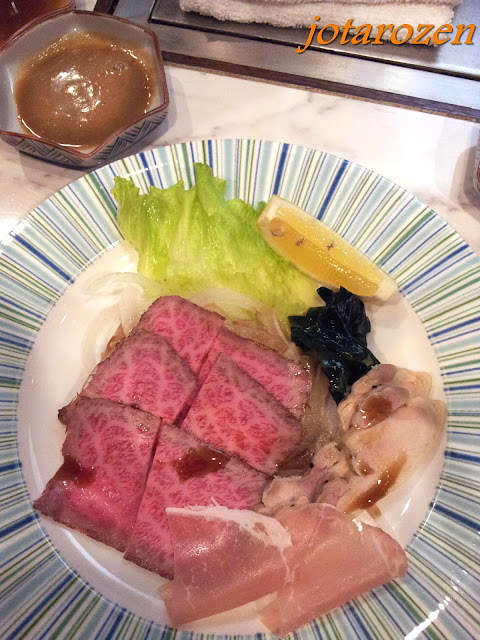 The cold cuts, consisting of beef, pork, fish, sea-weed, came first. The meat were tender and with a hint of lime. It was minimally spiced. Which was good as the natural tastes came through nicely. 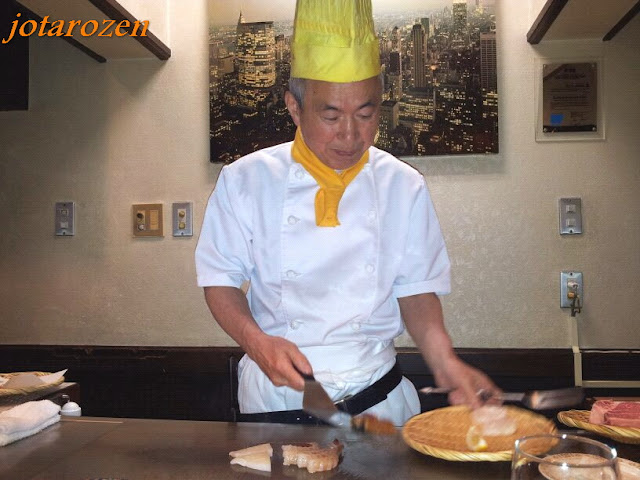 While we were slowly enjoying his cold cuts, the man went to work on his teppan cooking. But he was unlike the normal sober teppan chefs we normally encounter. He kept the teppan knife antics to the minimum and smilingly talked to us more. His cheerfulness warmed up the atmosphere, and perhaps added his heart into the cooking. 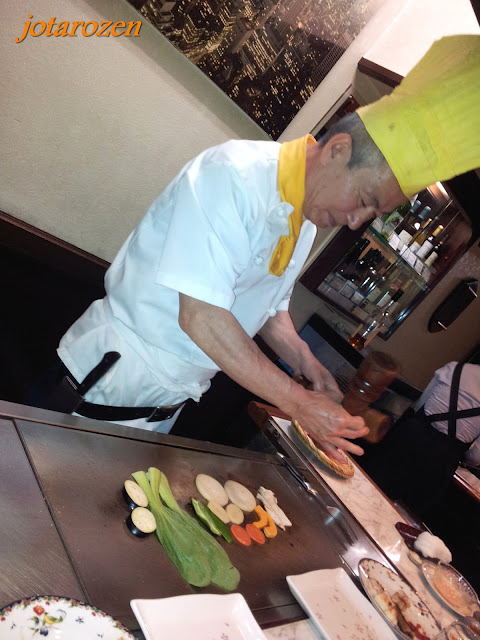 The meat were cooked just adequately and maintained their chewiness & juiciness. Whilst the sea-food was so fresh we could smell the sea in them. We ate them heartily, all the while being entertained by Mihara's stories, jokes and his charming smile. 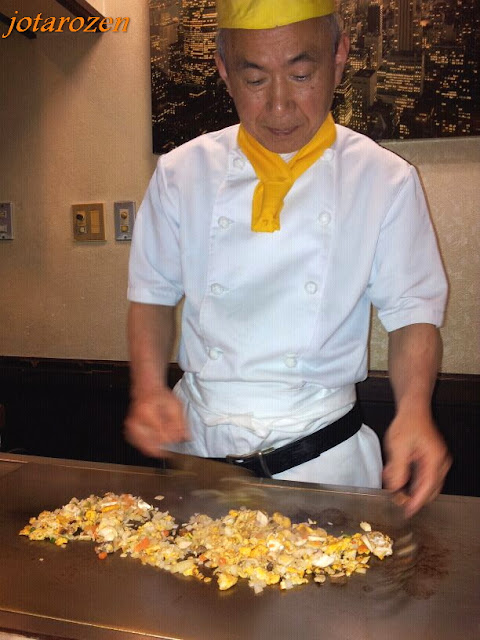 He next fried the eggs & chopped vegetables together with some garlic, and then added the rice. The rice were a bit over-fried and dry. It was the only dish we didn't really quite enjoy. 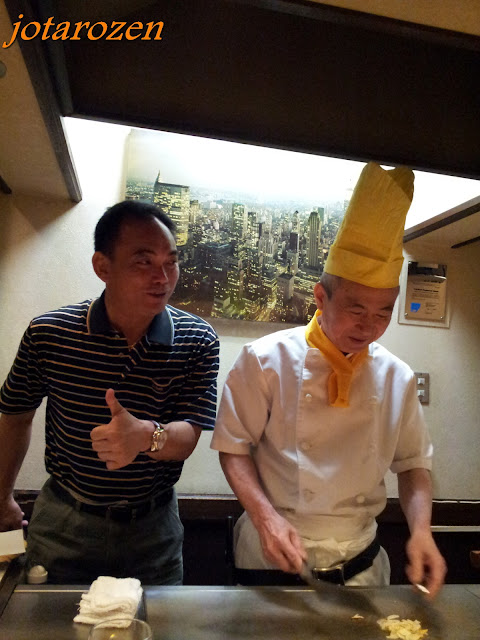 In all, it was a wonderful meal, served by a chef who cooked with love and cheerfulness. It was total dining - one with tasty food and a warm setting, both created by it's chef. Onto Oishin! 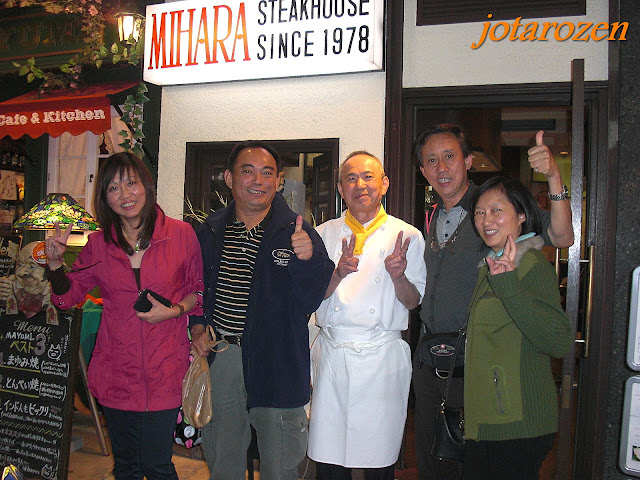 Mihara-san, ever the gentleman and good host, sent us off personally. A man and his cooking we will always remember fondly. 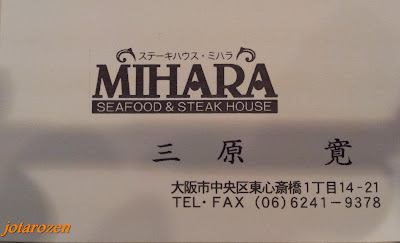 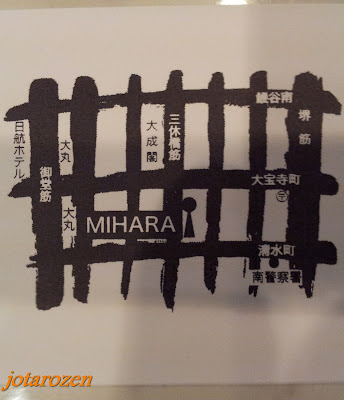 You are at - Jotaro's Blog / FootSteps / YummY! / Japanese Food / Mihara Teppanyaki
If you like this, view my other blogs at Jotaro's Blog
(comments most welcomed below. if you like this pls share via facebook or twitter)
Posted by Jotaro Zen at 8:40 AM