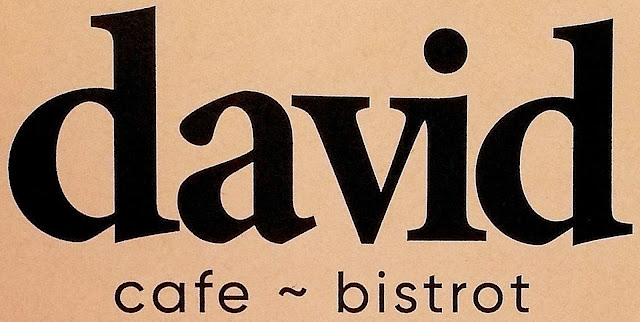 Taman Tun Dr. Ismail, Kuala Lumpur, Malaysia - October 2020
David Chin has opened this lovely place in Taman Tun Dr. Ismail called Cafe-Bistrot David which comes with a tagline of "A Celebration of Good Food". It's a simple tagline but the food that is served is not so simple, as much thought have been given to their creation and preparation.
In fact, much have been written about this cafe-bistro by international writers, younger bloggers, and even tattlers. And these writers write so beautifully, so eloquently and with such finesse. So truth to tell, after reading their reviews, I am a bit hesitant to write about the place lest I stumble over my words.
Many of us have known Dave (as most of us cycling buddies call him) for several years now; and I have made acquaintances with his food for decades; from enjoying Dave's Deli when we were in our young impressionable twenties till now, when we are in our golden years.
I had several cycling adventures with him, including a trip to the Payar Indah Wetlands, where he easily rode his recumbent trike, and then about a year ago in the Penang International Bridge to Bridge Ride. The bridge ride, starting from Penang Island across the 1st Penang Bridge to the Mainland and then back using the 2nd Penang Bridge, covered 70km was no mean feat for older guys like us, especially for Dave & his gang who were almost a decade older than this AhPek!
David had always played a role in our cycling fraternity, and even during his "retirement" to quiet Kuala Kubu Bharu, he had opened a shop called "Kedai Makanan Basikal Stopover". As the name suggest it was a regular stop-over for us cyclist en-route on our rides to Sungai Chiling and Fraser's Hill. So it was a good surprise to hear him open a new eatery. Just shows that we old chaps still have a lot of oomph in us, and are not ready to ride into the sunset yet.
So, YES .... I will get over my trepidation and write about my friend's new place. 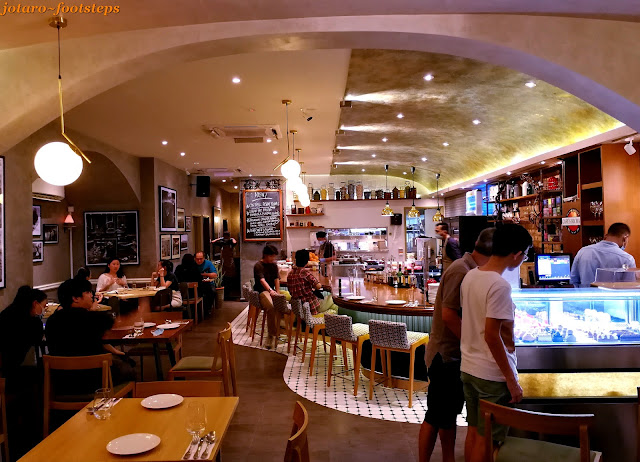 As one enters David's, a slightly diagonal arch running across the place, & placement of the tables made the place feel larger than it is and made it all the more comfy. The arch and curved ceiling reminds me a bit of a German beer cellar but sans the boisterous atmosphere. 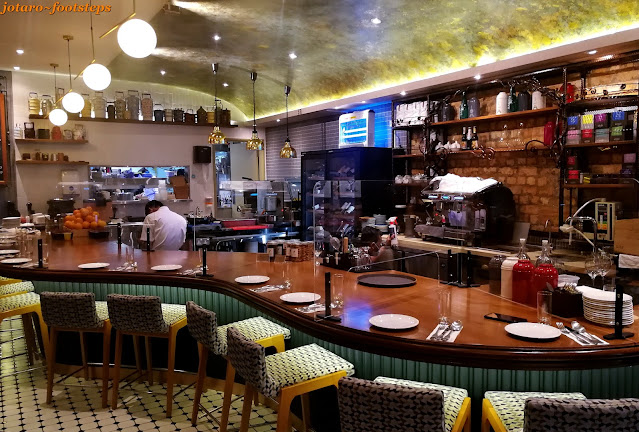 The curved ceiling leads down to a large, wide counter where patrons can have couples dining. The overall ambient is bright but not overly, 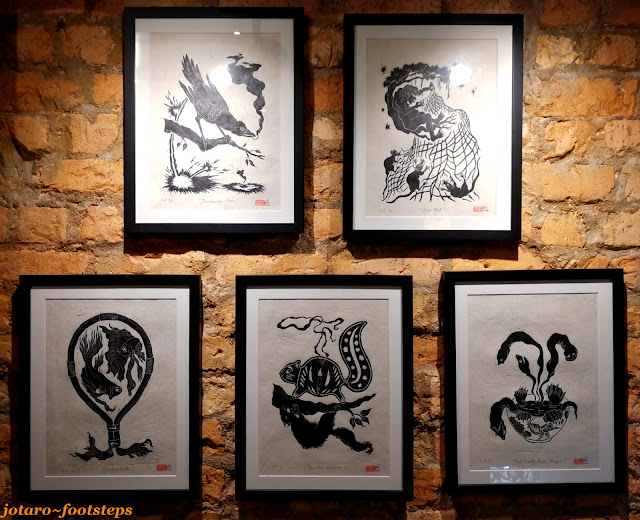 On one wall were framed cut-outs that reminded me of those 18th century French Silhouette, lending a Parisian air to the place and I am transported back to my time at artsy Montmartre! 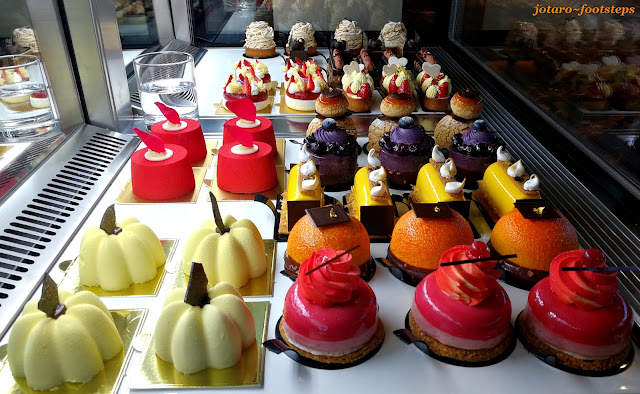 Just next to the silhouette, colourful pastry were on display. French pastry, are one of the best and these attractive ones are often sold out fast. So do go early if you want to get them. 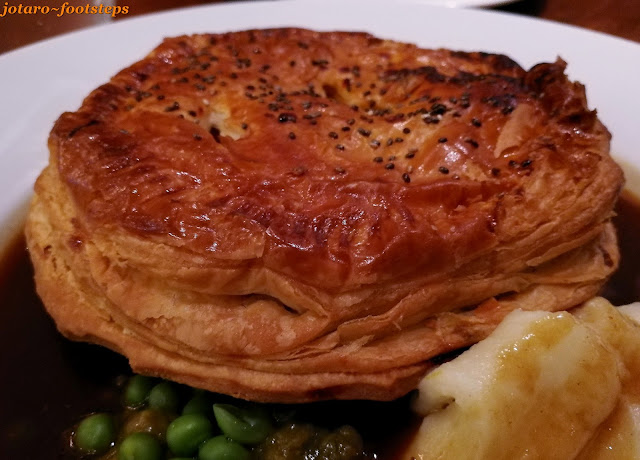 David's is renown for their pies; we went for the Lamb Pie which had firm, meaty filling with just the right amount of veggies and gravy without making the whole thing a soggy mess (which happens often with many other pies). It came with mash & mushy peas, together with very British looking green peas, which I found out later were actually French petite pois - no wonder they were as freshly young as spring. The crust is not the crumbly type but  the layered, flaky type (with a crispy rim) that goes very well with the tasty jus. 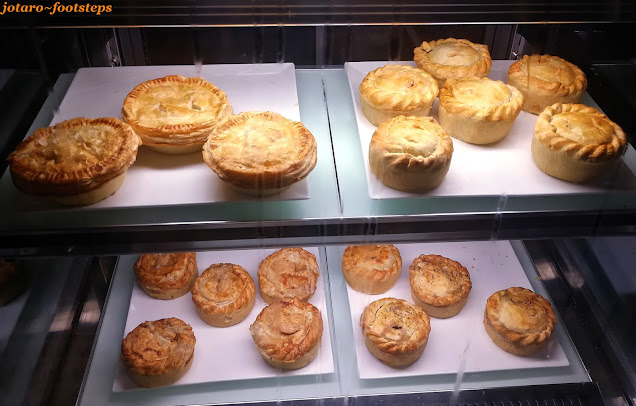 A glass cabinet near the entrance displayed other pies within their stable, including the classic Steak & Mushroom Pie. Click here for their range of pies. For those not into pies, they have a selection of a couple of quiches too. 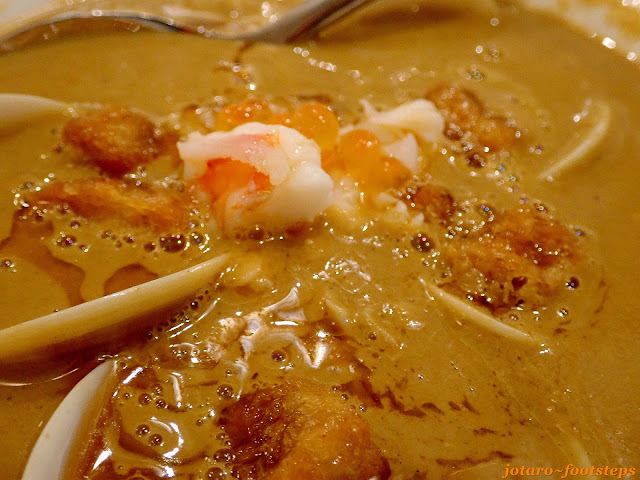 To start off, we had the Shrimp & Crab Bisque; the two combined seafood made it very flavorful. Overall it was strong & potent to give a kick to the palate, just right to work up the appetite for better things to come. I liked this very, very much and will definitely order it again. 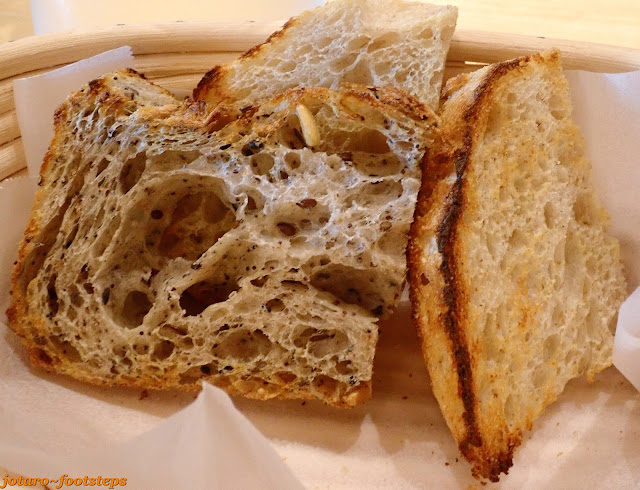 For the entree, we ordered the Sourdough Basket. The ones done here were beautiful - breadish without being too dense, and airily soft with a light layered crust. I had to refrain my younger son from dipping it into the soup and instead enjoy it's chewy bite together with the French butter and their self-made, light-flavoured marmalade preserve. My other son who liked things a bit stronger took them with the Grana Padano cheese. 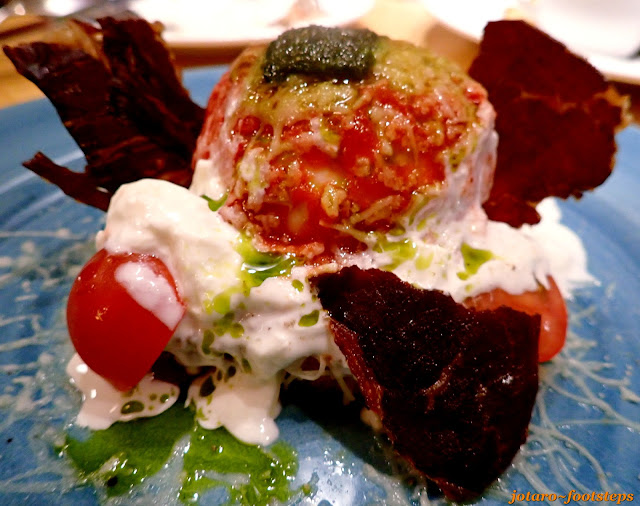 My children's favourite -  The Burrata: a fusion of Italian Burrata cheese with tomato, Cecina (Spanish air-cured beef slices) served with sourdough toasts. This is one colourful dish that is a lively flavoured. The Cecina, reminded me of other air-cured meat like the Fuet - a Catalan thin, dry-cured, pork sausage - that I had at Bar Surreyes; just across the French border into Spain. I would suggest slowly munching the raw cecina separately, in order to appreciate its underlying taste.
And now for the entrées, if you see a lot of food here don't get shocked; they were taken over two visits 😄. 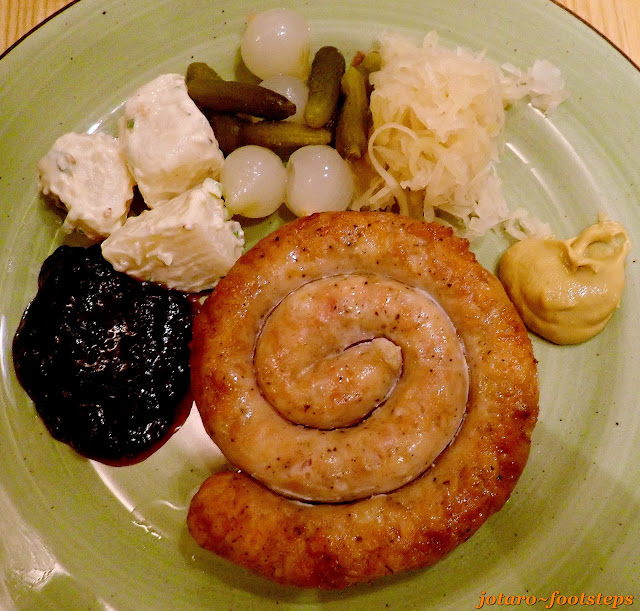 The Toulouse Sausage was a super fusion: one of French Saucisse de Toulouse served with German sauerkraut salad, British pickled gherkins and pearl onions, American cranberry sauce and French mustard! Straight away, this dish made me miss my sister Mary who stays at Monclar-de-Quercy, near Toulouse. I must bring her here, when she and her French husband Phillipe are back; they will definitely appreciate David's food. 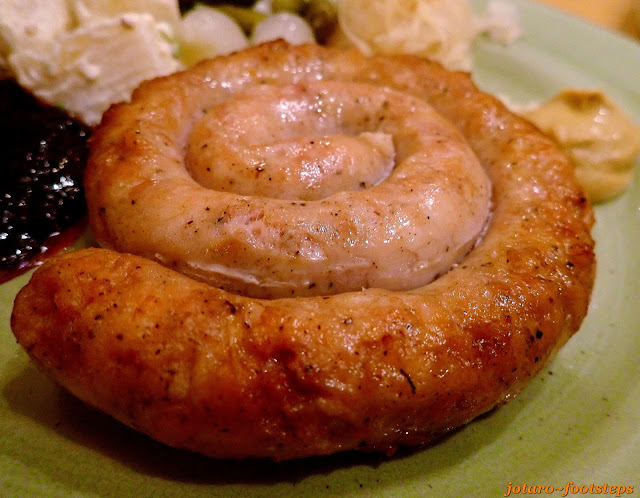 Anyway, I detract - the lightly-grilled spiral sausage was tender with hints of herbs; tasty but not as strongly herb as the British sausages. The strong sauerkraut and pickles contrastingly balanced the light flavour of the sausage and cranberry sauce. 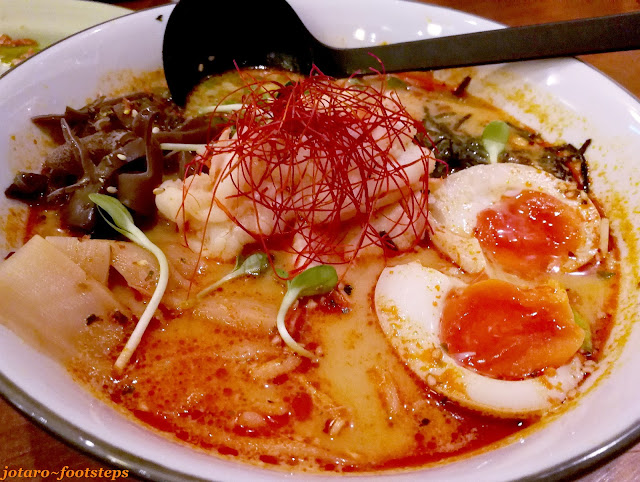 From the West we swung over to the East with this Mixed Seafood Curry Ramen that came with shrimps, clams and toppings of Ajitsuke Tamago (ramen eggs), Menma (fermented bamboo shoots), Wakame (seaweed), Kikurage (Wood Ear black fungus), and a touch of hairy red deep fried chilli strips. The kicker was the smooth, light curry which makes it a real Asian fusion as this broth is akin to Penang White Curry Mee, which is one of the tastiest curry for noodles.
For health buffs there is an option with low-carb Konjac noodles. 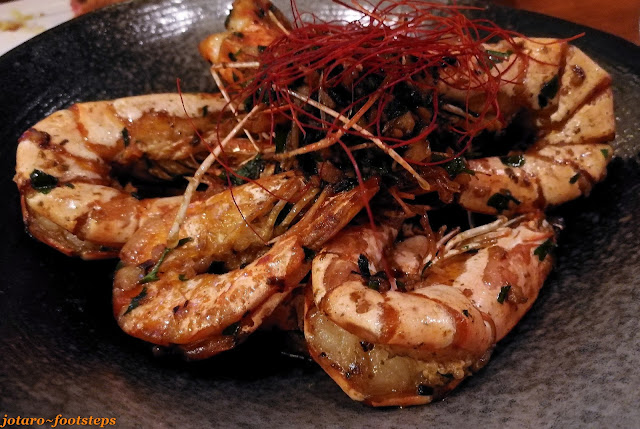 And here's some super, super fresh Tiger Prawns grilled with garlic & Konbu butter sauce, a touch of parsley and a hint of white wine. I felt that the prawns were overdone a bit, resulting in a slightly tougher meat but this was made up for by the simple sauce which had enhanced the flavour. They are quite generous here, coming with eight prawns - more than enough or the five of us to share. 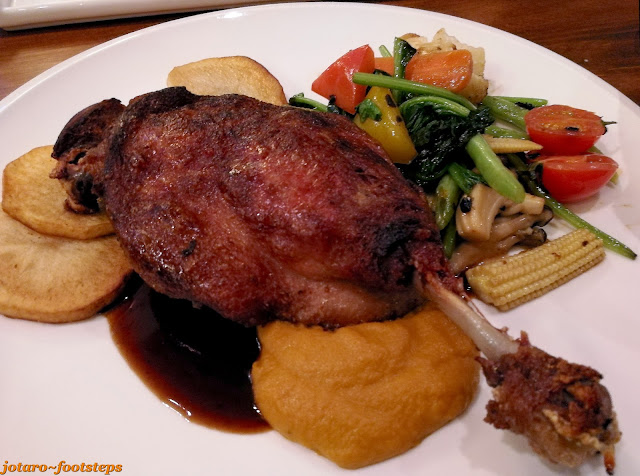 My Achilles heel - Duck Confit. Ever since experiencing superb Confit de Canard in Montmartre, I will order it whenever its on the menu. I am a sucker for this and even had it when I was in Vientiene, Laos! Serene Laos was a French colony and they do have some fine French restaurants there.
Duck Confit is not an easy dish to prepare, requiring more than a day of curing, and hours of slow cooking (in duck fat) and a final crisp frying. I dare say that my search for good ones in the Klang Valley is over; the ones here is one of the better ones I had, with the duck meat tender & tasty, and the skin adequately crispy. They were served with sautéed vegetables and pommes de terre à la sarladaise (potatoes roasted in duck fat). 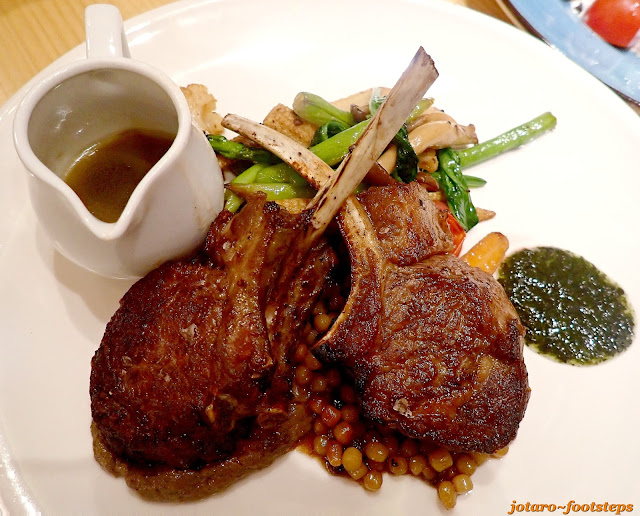 For non beef eaters (like the missus), The Rack of Lamb was heaven-sent. It's two meaty cuts that's slowly roasted until perfection - surprisingly very tender with a good lamb aroma. 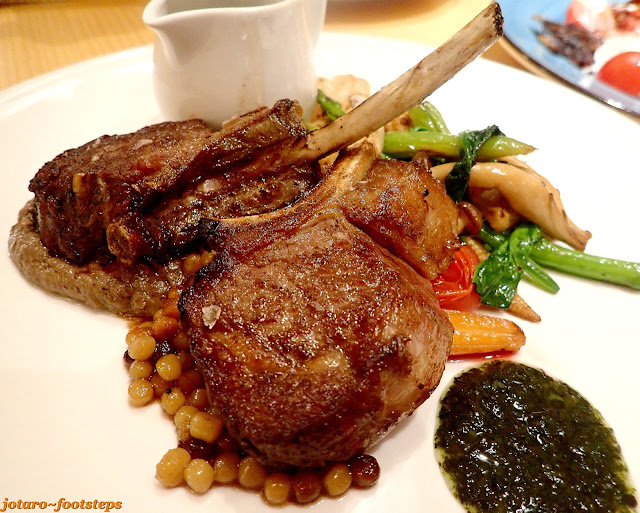 It came sitting on a bed of unique Fregula Sarda; these pearly semolina pasta from Sardinia. were light and reflected the flavour of the lamb. 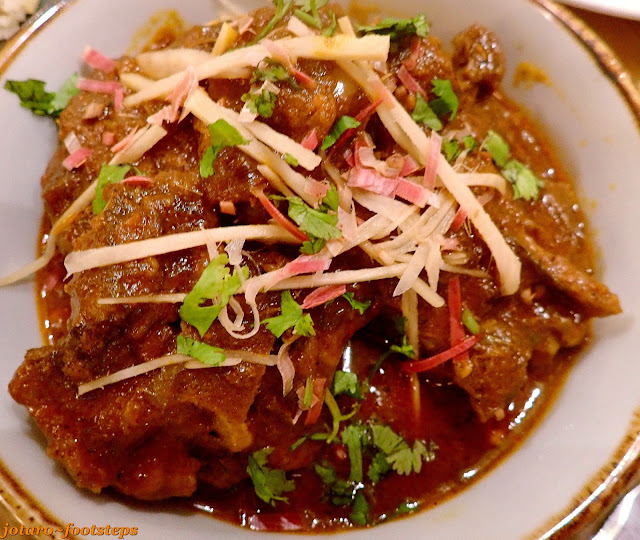 With our last dish, the Ox Tail Asam Pedas, our food escapade comes a full circle back to Malaysia. Asam Pedas, a sour & spicy curry, is usually cooked with fish - but David has taken it out of the box and did it with Oxtail! It's a good new combo with their curry thicker, slightly sweet, and not overbearingly sour. It came with a separate fragrant Ghee Rice served with salsa and Yeneni Zhug sauce.

It's great that Dave has opened a place that offers a fine range of gastronomic creations with a good fusion of international cuisine, and at reasonable pricing too.I had so much fun eating that I felt like Asterix & the Banquet, on his whirlwind feasting tour, savouring French food from several regions! It was an eating adventure of French to Spanish to Japanese and Malaysian.
In the end, it's not just a Celebration of Good Food, but it is also a celebration of the man and his life long passion.
CAFE-BISTROT DAVID
135, Jalan Aminuddin Baki, Taman Tun Dr Ismail, 60000 Kuala Lumpur, Malaysia
Tel: +60 3-7732 0332
Hours: 11:00am-4:00pm & 6:00pm-10:00pm (Closed on Mondays)
David's Classic Menu.
David's Beverages Menu.
David's Take-away Menu.
Facebook: https://www.facebook.com/CafeBistrotDavid

You are at - Jotaro's Blog / FootSteps / YummY! / Western Food / Cafe-Bistrot David: Good Food From An Old Buddy
If you like this, view my other blogs at Jotaro's Blog
(comments most welcomed. if you like this pls share via facebook or twitter)
Posted by Jotaro Zen at 12:36 AM