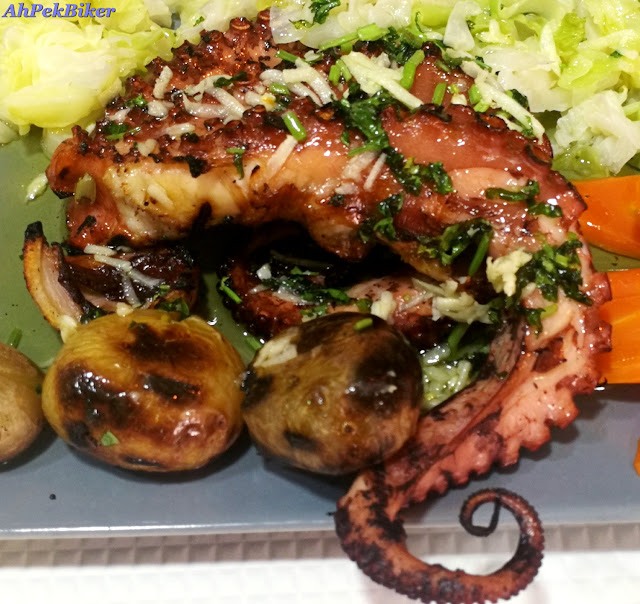 Lisbon, Portugal - November 2019
We were on a cycling tour at the Iberian Peninsula and Lisbon was one of our main destinations. We stayed a couple of nights there to explore the city more. Having been in Portugal for more than a week, we had tried many nice Portuguese food. So here at the country's capital we naturally went hunting for more! 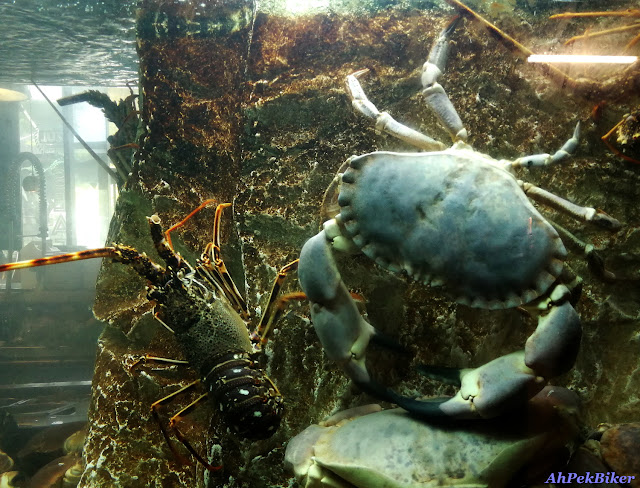 On our second day in Lisbon we were down at the Mercado da Ribeira, touted to have great food to offer. Many live seafood were on display like these lobster and crab in an aquarium.... which sort of reminded me of the many, varied seafood we saw in Busan during a cycling tour of Korea. 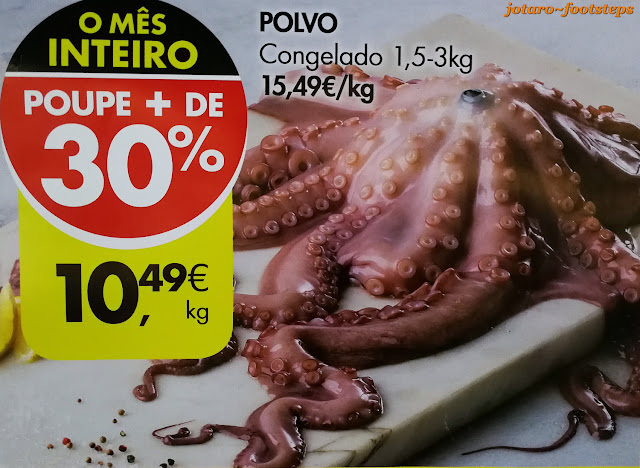 But a couple of our friends, who was there a day earlier, had hinted that the place was more for tourist that came with tourist pricing. We were more keen to look for authentic Portuguese food in a more local setting, i.e. sans tourists, when we saw these advert for Polvo .... that's Portuguese for octopus, which is one of the food not to be missed when in the Portugal. So off we went a food-hunting and found this place called Restaurante Bacalhau just a couple of streets away, and on their front signboard it stated "Cozinha Tradicional Portuguesa" which meant "Traditional Portuguese Cuisine".
GREAT! JUST WHAT WE WERE LOOKING FOR! 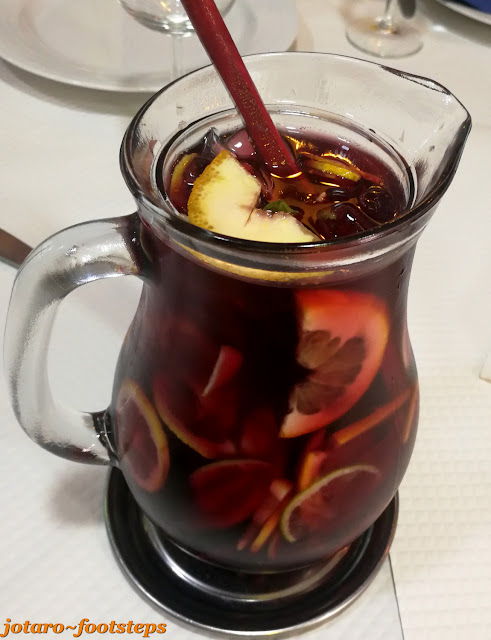 We kicked off with a jug of good blood red Sangria; it was really refreshing with lots of fruits inside.... pretty strong too as we felt a bit tipsy afterwards 😅. 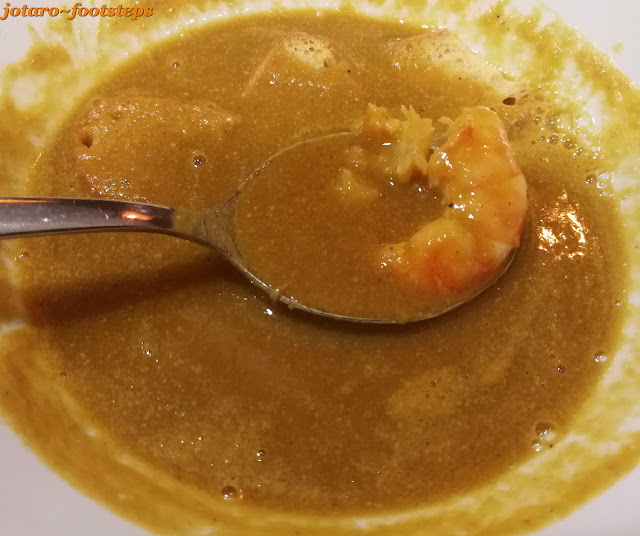 We started off with this simple Prawn Cream Soup which did not look like much but was in fact a very tasty soup, one that tasted much better than many lobster bisque that I have had. The soup was adequately thick, creamy but not overly and had a very strong prawny flavor. It was a good thing that we had a bowl each as we savored it to the very last drop! 😋 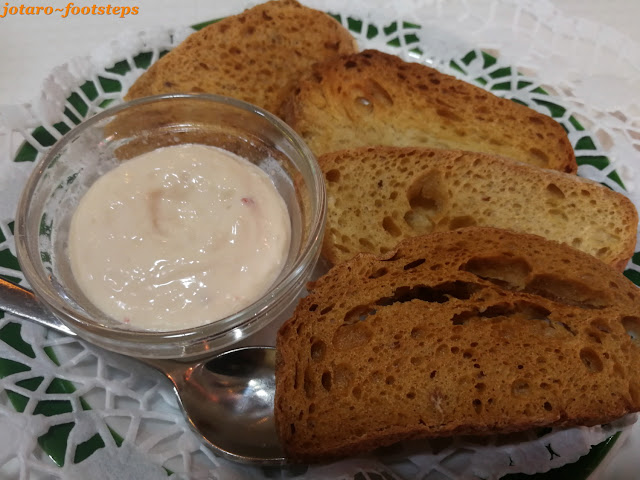 The soup came with corn bread toasts and a small bowl of mayonnaise. 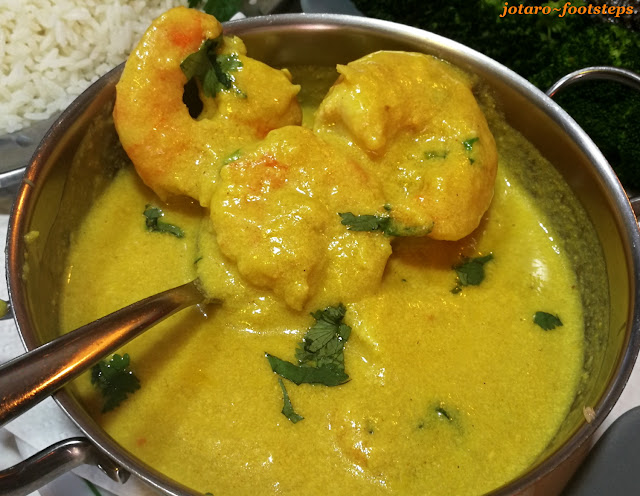 Then came this Green Shrimp Curry, looks like a Thai dish but perhaps this is the Portuguese version. Whatever the case was, the shrimps were very fresh and had lent their flavor to the gravy. It came lightly buttered white rice which went very well with the lightly spicy curry! 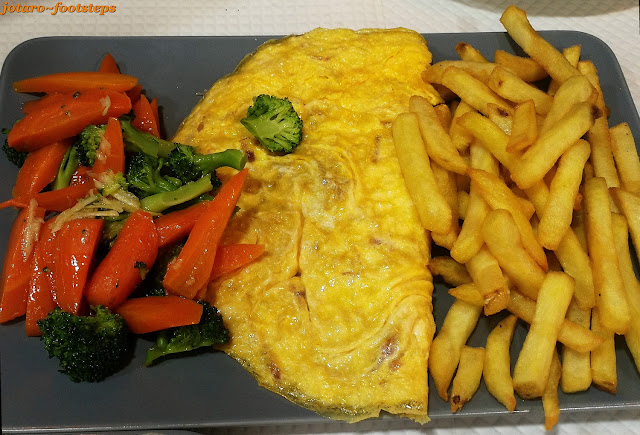 Next was the Parma Ham Omelet. It was suppose to be a light starter but turned out not so light as it came with lots of fries and sauteed vegetables. The fries were very good, and like the ones we had at Restorante Nova Launda in Porto, we found them to be much better that the highly-touted Belgian Frites; which was not surprising as it was the Spanish that brought potatoes to Europe from the New Wold. 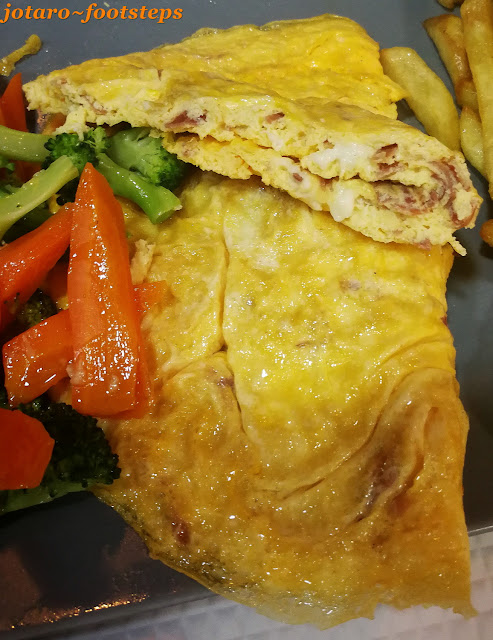 The air-cured ham (which is also know as Prosciutto Ham), and usually eaten raw) added their strong flavor to the simple omelet. 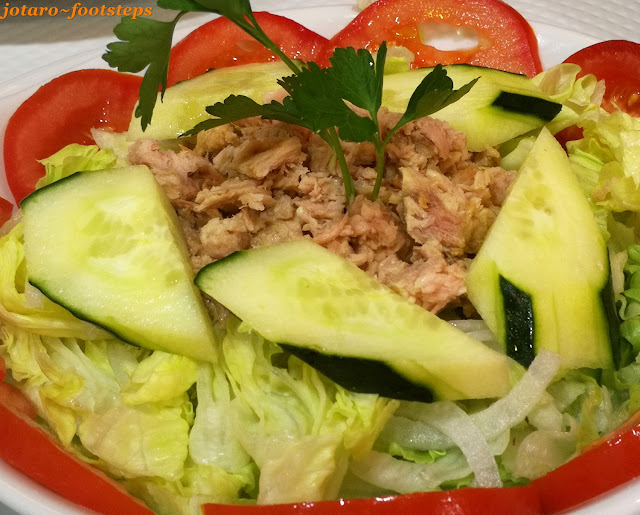 The Tuna Salad came with freshly shredded fish in a light cream sauce and surrounded by greens. Instead of eating the toast with the soup, we had it with this salad. Sort of using the salad as a pate, which worked very well. 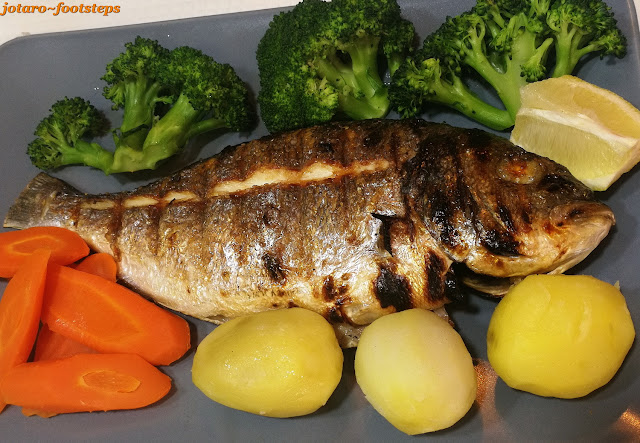 Pan-fried Sea Beam, simply done yet tasty as the fish was very fresh. 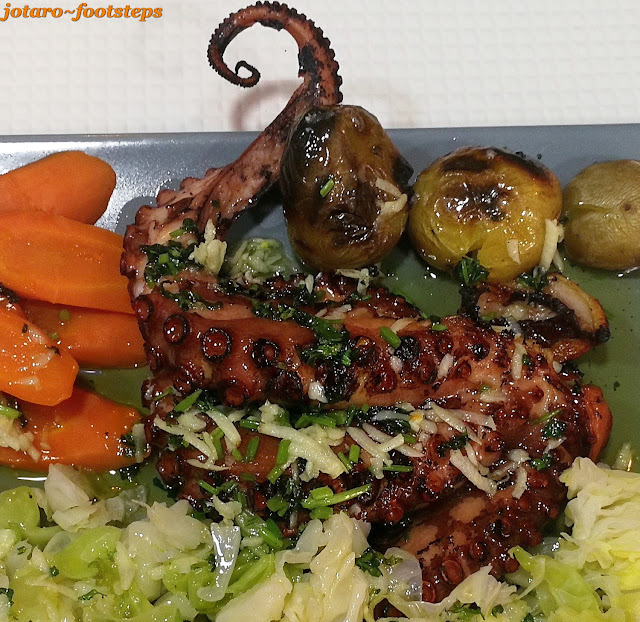 And here comes the reason we are here the grilled octopus (polvo grelhado), it's just a tentacle but was one that curled seductively. It came with some sauteed vegetables and roasted potatoes. Surprisingly although it was a large tentacle the cooking has been done such that it was very tender with the slightly burnt skin giving it that oomph of an aroma. 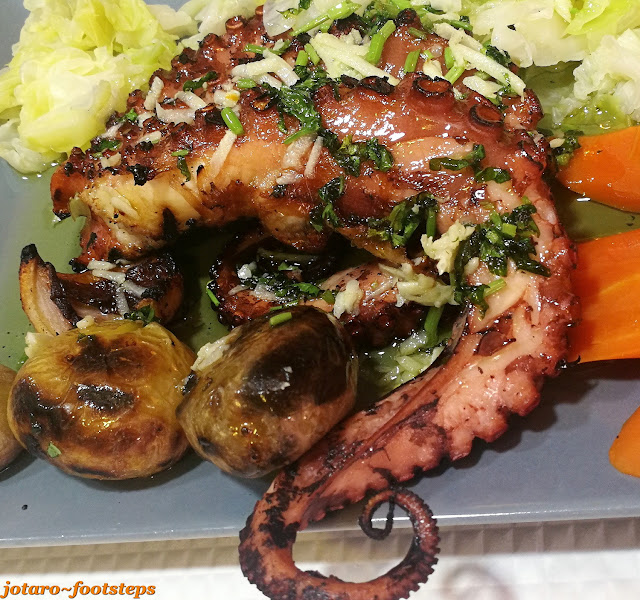 Like squid, the cooking style is important so that the meat does not become rubbery. Although looking like a simple dish it's not that easy to cook and actually require some pre-cooking for two hours before the actual grilling in order to be able to achieve a tender inside with a flavorful singed crust. Here's a recipe on get the perfectly grilled octopus. 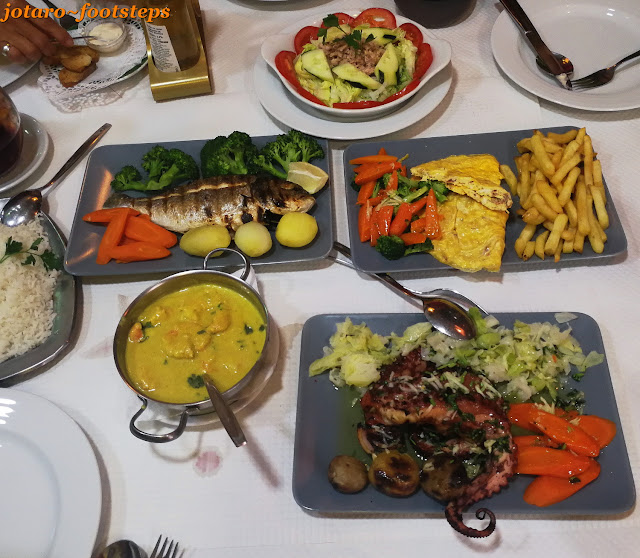 Our lunch for six pax. Each dish came with lots of vegetables, carrots and potatoes. This made our meal "complete" without having too rder extra fries, vegetables. The bill came to €81 for the six of us, i.e. €13-50 per pax, very reasonable for an European country.

Bacalhau serves up many other good dishes, below are their menu: 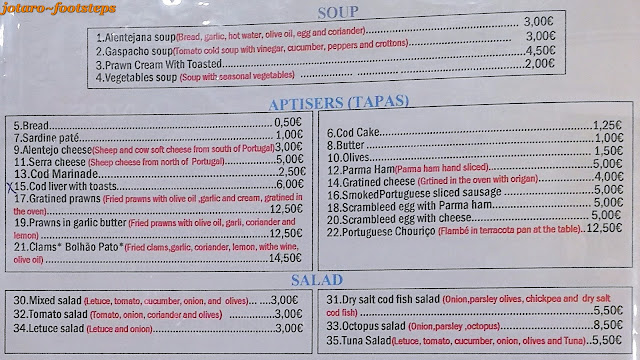 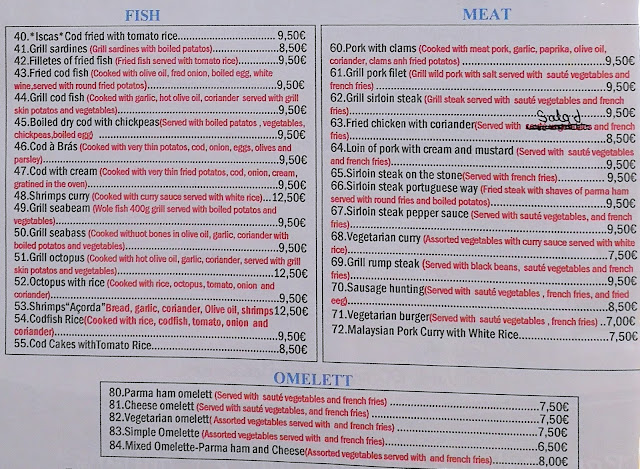