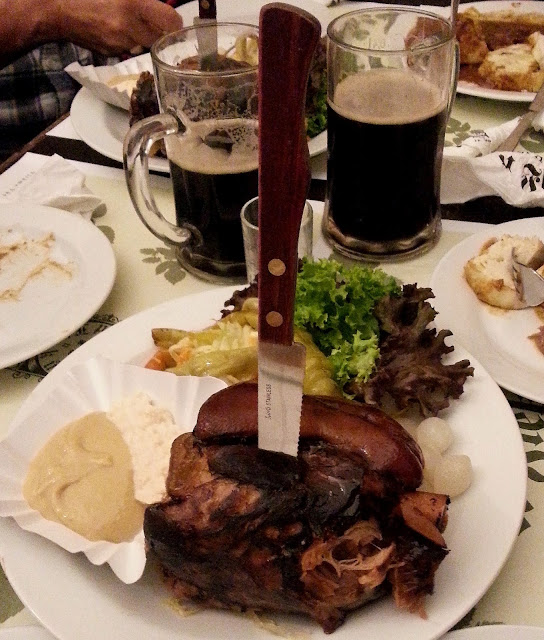 Prague, Czech Republic - September 2015
Looking for a nice place to savour good Czech food while in Prague? Look no further than U Fleku, it's a restaurant... and it's a brewery too... and perhaps even much more (see why as you read on). The place serves good medieval Czech food and brew their own beer. I say medieval as U Fleku, dating back to 1499 A.D., has been around since the Medieval Age. Yes, it has been serving good food and good beer for hundreds of years. I can imagine some knights in their clanky armour entering the place and saying "Yo! Give me the best of your pint and a boar knuckle!" I can imagine them drinking what we drank, and eating what we ate! 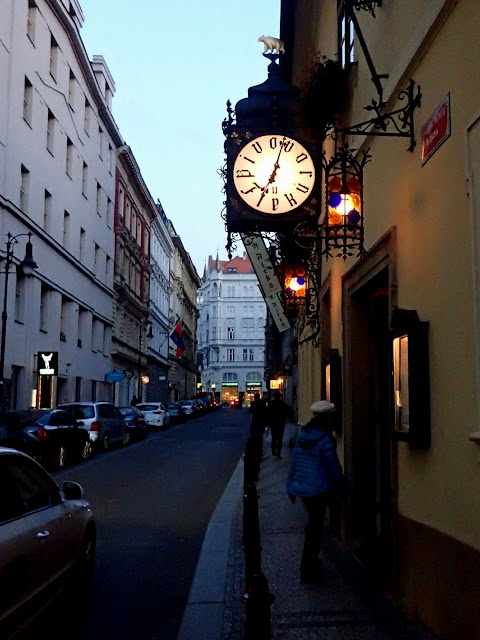 Fleku is not difficult to find, just do be careful which door you use!
On a tour of the Czech Republic, we were looking for the place in the evening, walking along a dim narrow road (Via Křemencová) saw this double-leaved door with a sign saying "U Fleku - Cabaret" and tried to open it. It was locked. Huh! .... odd.... U Fleku, a Cabaret? Did we get the right place? And was it closed?
Eager to try Czech food and having heard much about U Fleku, we plodded on and found another door stating "U Fleku" below a large protruding clock. 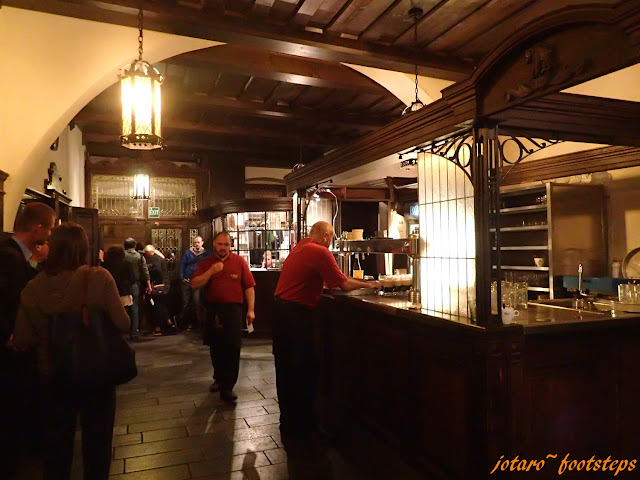 Entering we saw a small bar with some small tables - Hmmm.... this don't seem to be a place to eat. If just looking for a drink, the bar area seems like a good place; but I would suggest dining at their dining hall (at the least take a soup or salad) for the full experience.
Undeterred we spoke to a waiter and told him we had reservations for 7:00pm. Acknowledging us (Phew!), he led us to .... 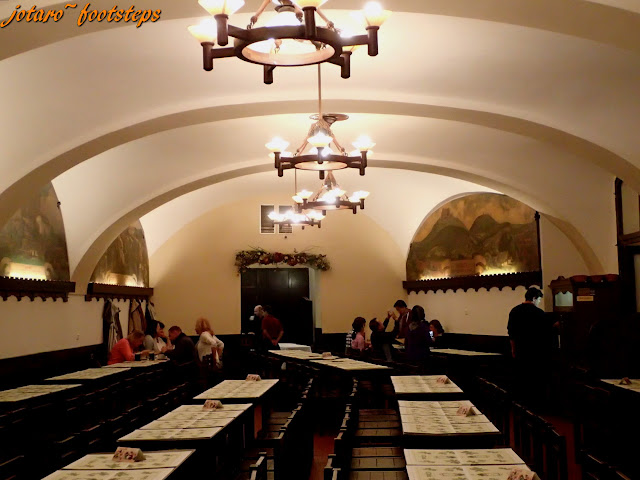 ... a large cavernous hall with an arched ceiling that looked more like a beer cellar. This is getting more exciting... We are going to eat in a former beer cellar! Although we were running a bit late, the place was still almost empty; we quickly flicked through the menu, getting ready to make our orders. 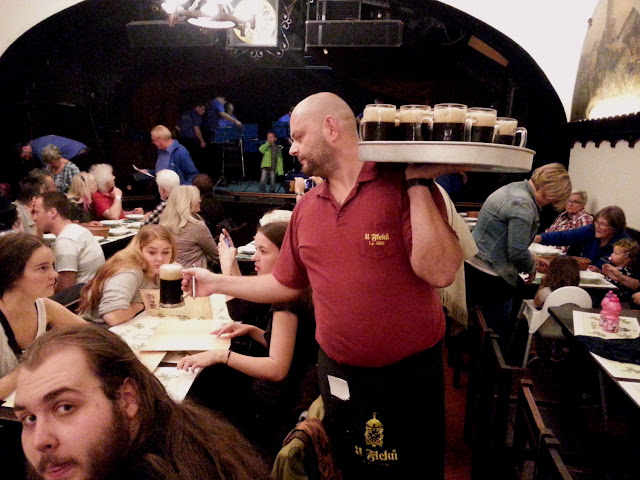 Even before we could make our orders; a tall bald waiter sauntered in, deftly balancing a large tray with mugs full of dark ale. Hey! We haven't ordered yet! "You want beer, just take it," he mumbled. We took a few mugs quietly, not daring to question this tall burly and stout guy. 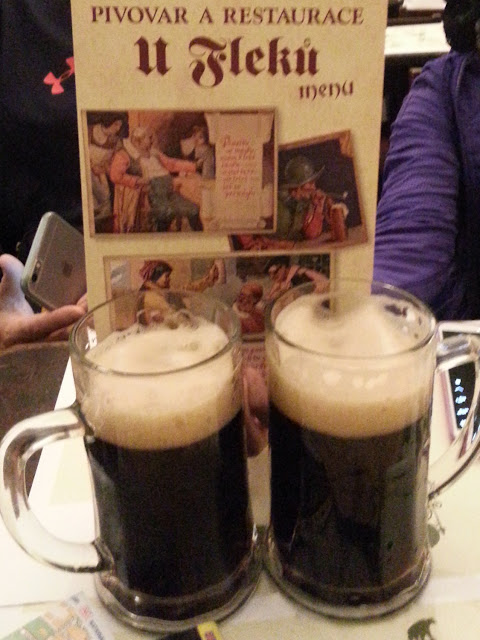 U Fleku's beer are made by their own brewery. Smooth, not overly bitter and slightly sweet, it's one of the best that we tasted while we were travelling in Eastern Europe. 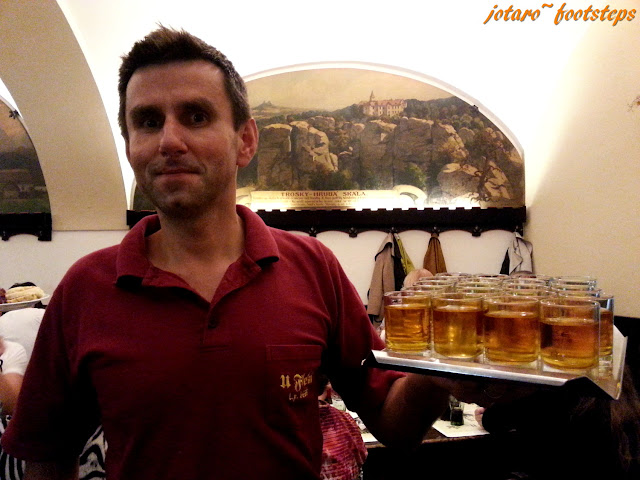 Another waiter sauntered in, him with a tray of honeyed & herbal liqueur. This time we knew better than to ask, just took what we wanted; and like the other waiter, he wrote it down on a piece of paper. A third waiter came to take our food order; we ordered different dishes to share bits with each other. 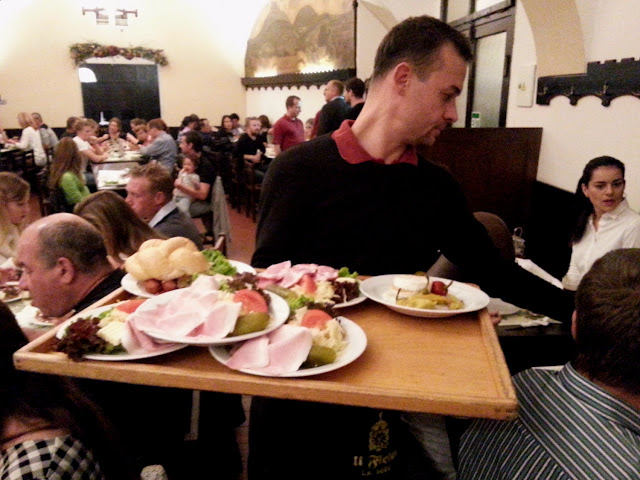 Our orders came via a waiter carrying a large tray with our food. These guys must have very strong arms! 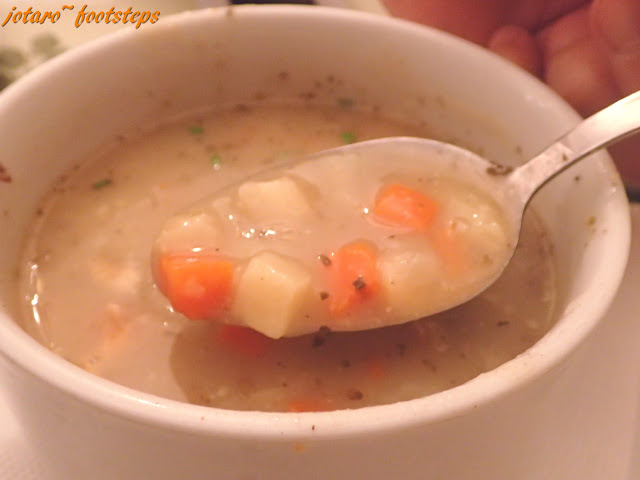 First of was this Potato Soup; light in taste and not that flavourful but it will do to keep us warm in this chilly weather. 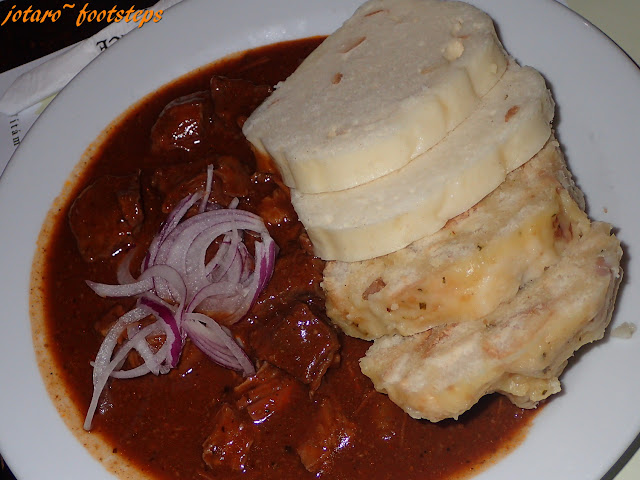 Czech Goulash, with a thick purée rich in spices and lots of beef (the beef could have been more tender). This was accompanied by two slices each of speck and bread dumplings. The dumplings are somewhat similar to the steamed Chinese "Mee Ku" dumplings. 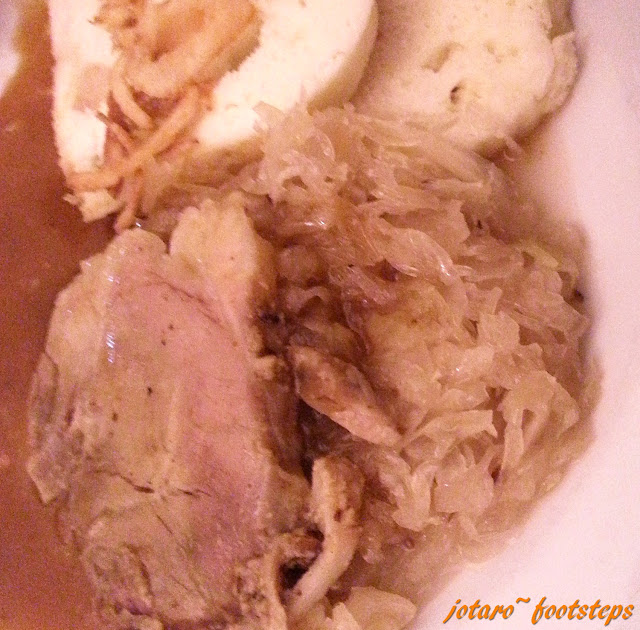 Roast Pork with White Cabbage. It came with dumplings too. Czech pork are somewhat more tender and juicy. 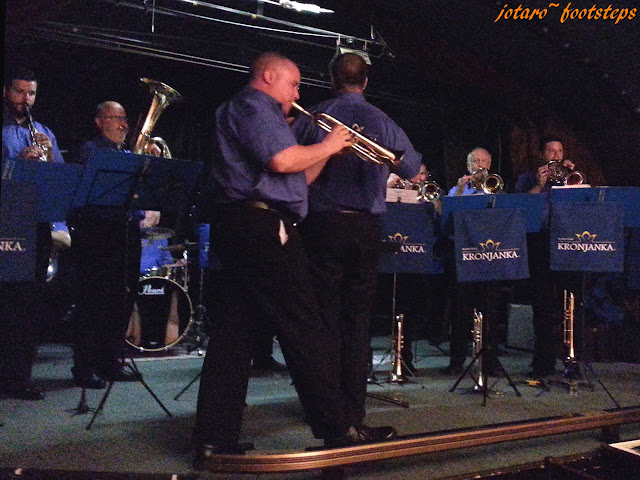 At the stage on one end of the hall, a trumpets & horns band assembled and started belting out patriotic song (like those that soldiers marched to, imagine drinking and dining to Willaim Tell's Overture and you will see what I mean). Their songs made our hearts raced, pumping up our adrenaline for more drinking and working up our appetites for more eating. Drink my friends drink! After all it's Oktoberfest! 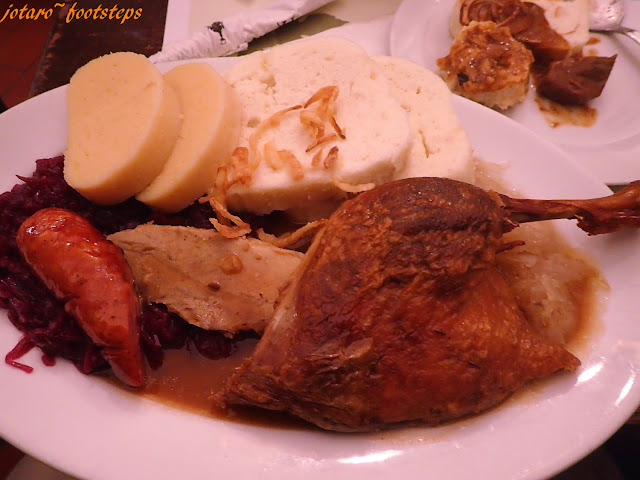 The U Fleku's Treat consisting of roast pork, 1/4 roast duck and sausage. It came with both bread and potato dumplings, and white and red sauerkraut cabbage. I like the sauerkraut here, they are less sour and slightly sweeter. 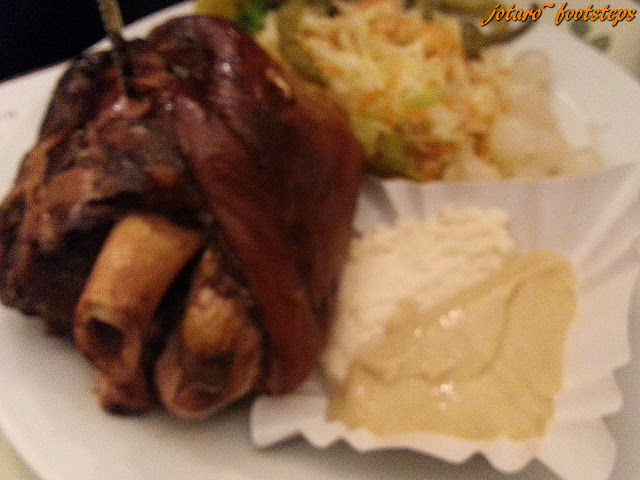 The Roast Pork Knuckle. Apologies, the photo is a bit blur; I was getting a bit tipsy from the beer! 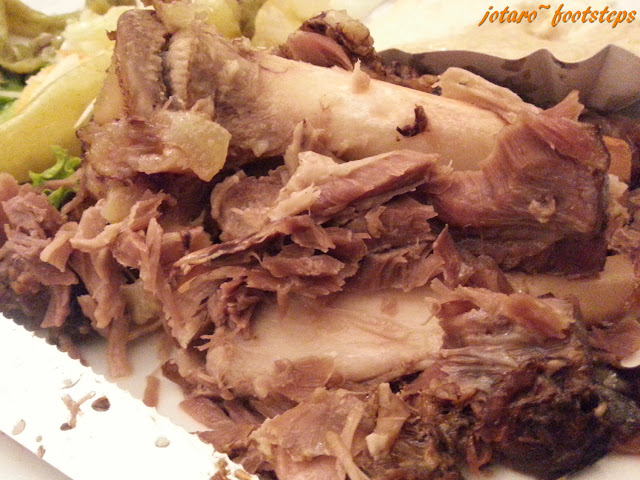 This is a better photo but one of the knuckle shredded down, whacking down some of this did help improve my tipsiness. The meat was slightly dry and a bit too salty. The roasted pork skin was not all that crunchy and some were rather chewy. 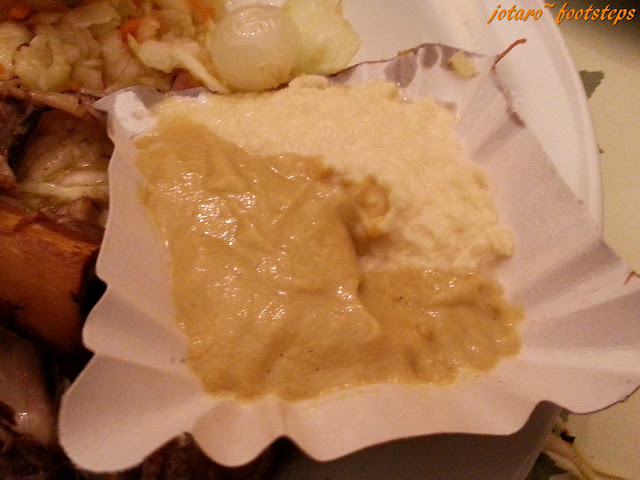 Most of the dishes came with mustard AND also grated horse-radish. Be prepared for some hot stuff though, the radish is spiked with mustard too! 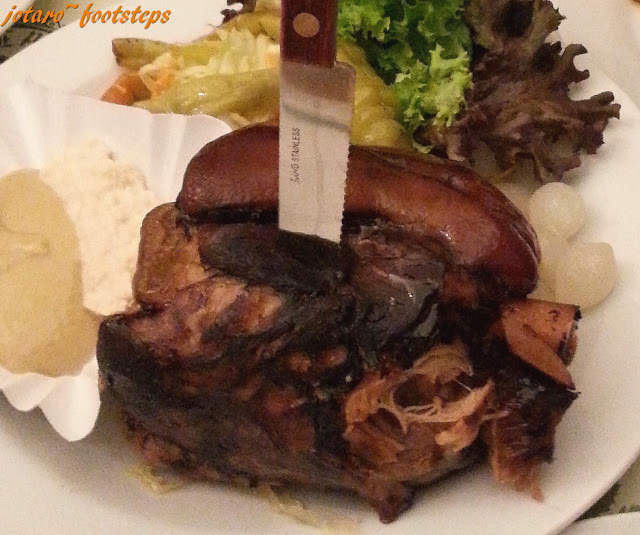 Now comes the King of the Evening: the Smoked Pork Neck. It came mediaevally presented with a knife stuck into it! Nice and tender, I liked this dish the best of all and the layer of fat looked sinful but would be helpful for the later cold night. The skin was soft and easy to bite into. YummY! 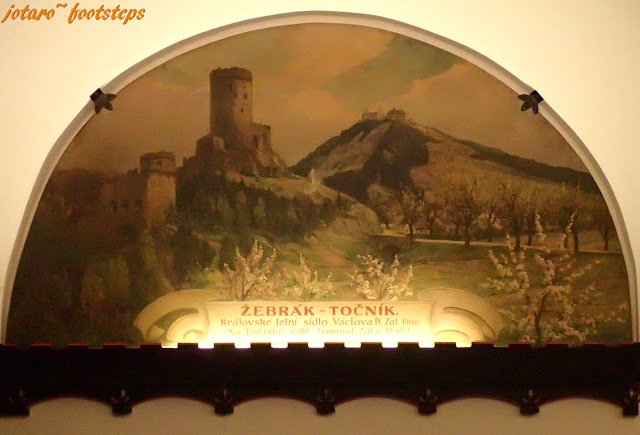 Looking at the many murals of medieval castles on the wall, I leaned back and feeling like a grand but groggy medieval lord, I savoured the moment.

The following are the menu of U Fleku: 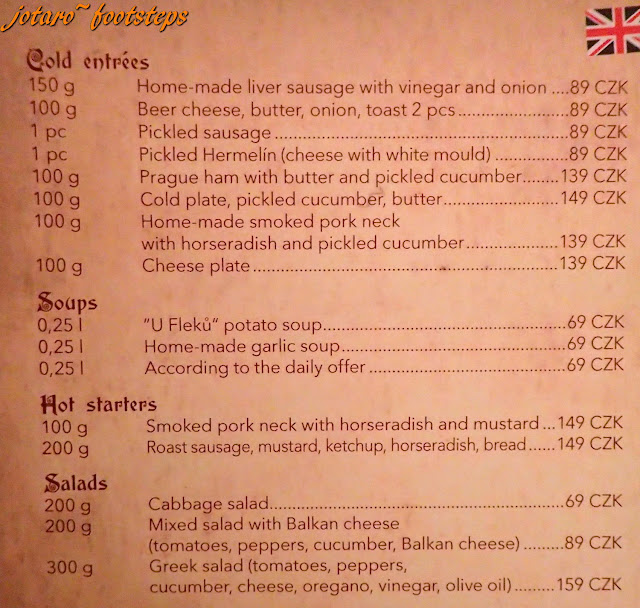 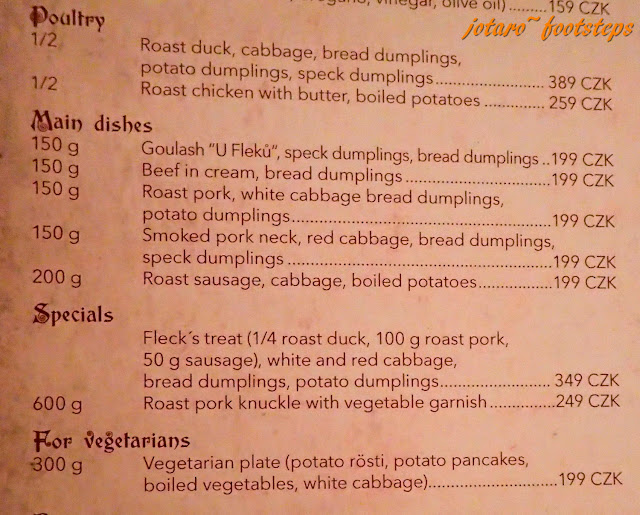 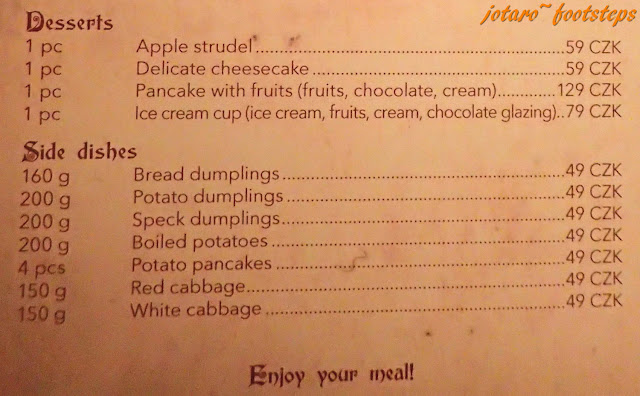 Fleku's Menu for Desserts & Side Dishes. 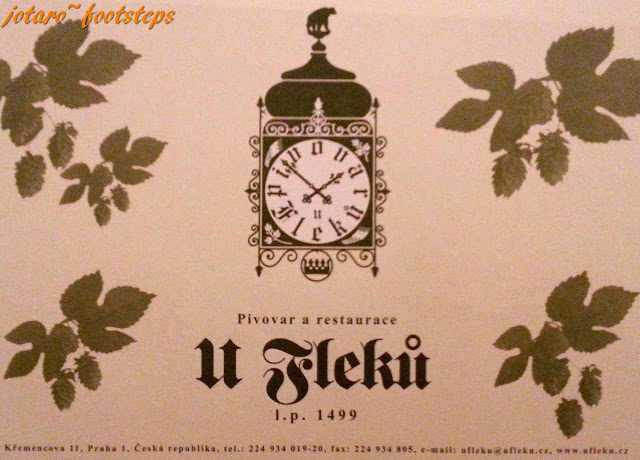 You are at - Jotaro's Blog / FootSteps / YummY! / Europe 2015-Western & Fusion Food / Czech Food & Drink Fest @ U Fleku Prague
If you like this, view my other blogs at Jotaro's Blog
(comments most welcomed. if you like this pls share via facebook or twitter)
Posted by Jotaro Zen at 12:22 PM