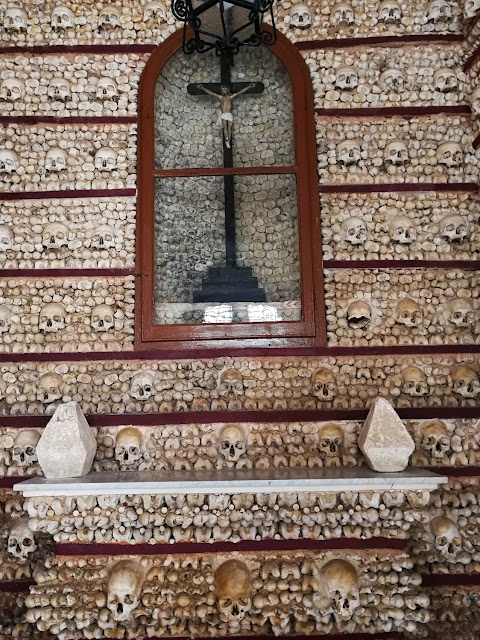 Faro, Portugal - November 2019
Faro one of the southern-most cities of Portugal and with it's Atlantic sea-front is a favorite destination for sun-seekers from the colder north. It's old quarters is a draw for tourists seeking the old town charm... 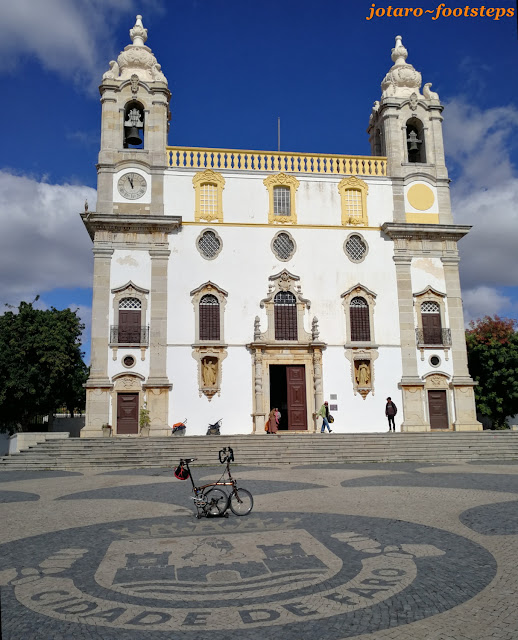 But outside of the old quarters is another attraction not to be missed it is the Igreja do Cormo church. From the outside, with just a humble facade of a church with twin bell towers, it doesn't look like a grand church. But within its rear compound lies a hidden secret. 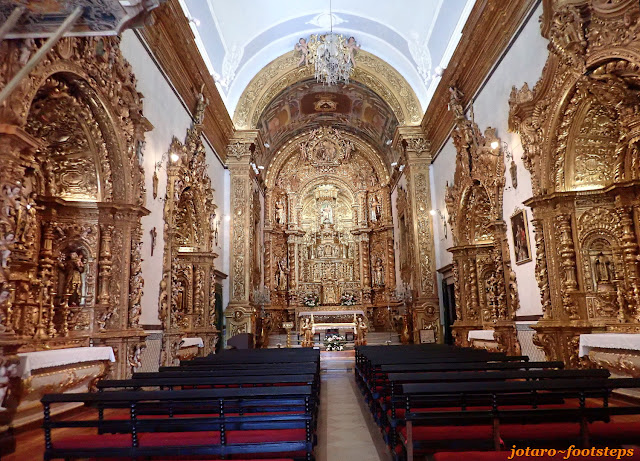 But don't rush to the rear, take some time to explore the inside of the church. The humble exterior belies the interior that's richly adorned with gilded fine wood carvings. Inside is a narrow apse which is surrounded by four shrines and a main altar area up front. 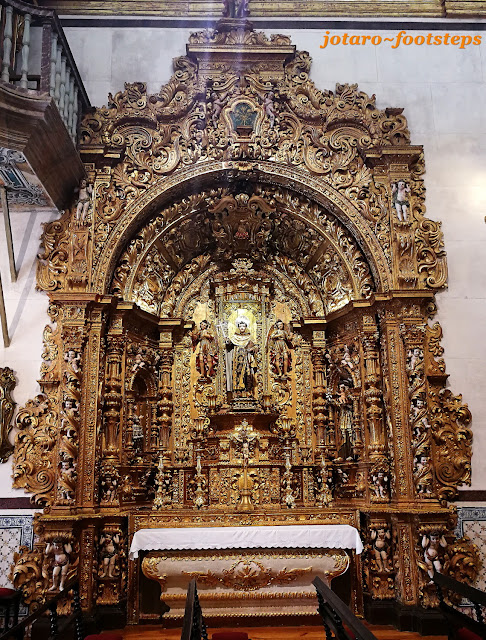 At the side walls are the four shrines, each dedicated to a different saint, but all are similarly embellished with finely detailed gold gilded carvings that reached up almost to the church ceiling. 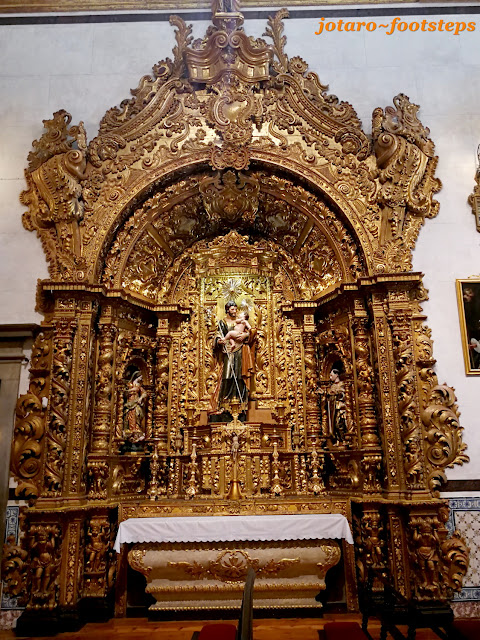 The second shrine is dedicated to St. Christopher. 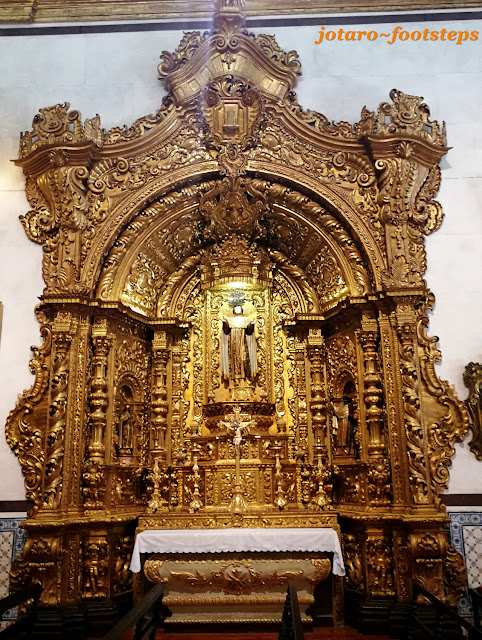 The third shrine; unfortunately the names of the saint is not annotated and I could not recognize this one. And also my apologies as I missed out photographing the fourth shrine. 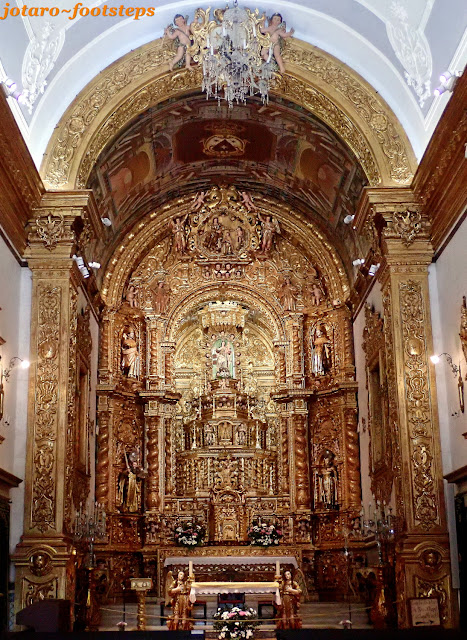 If the shrines are elaborate, the apse (main altar area) is even more so.
It stands taller and goes inwards in several gilded arches. 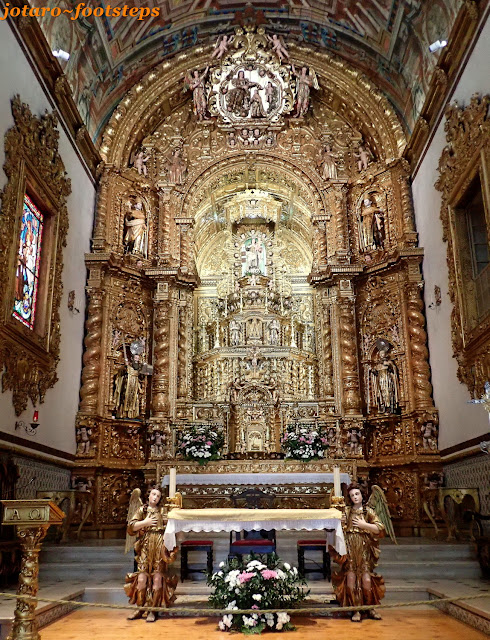 A closer look at the apse; a couple of angels hold up the front altar and a rear altar faces the communion cabinet. Spiral columns hold up two inner archers and all this fine woodwork are gilded. 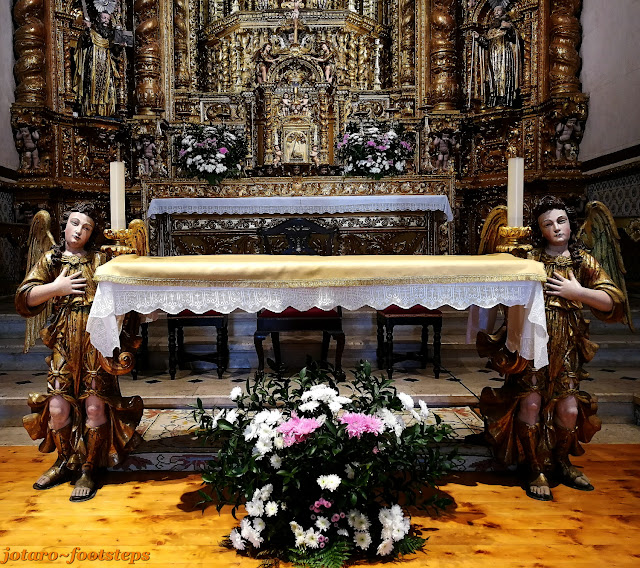 A closer look at the front altar, the angels are clad in gilded gold robes instead of the usual white. 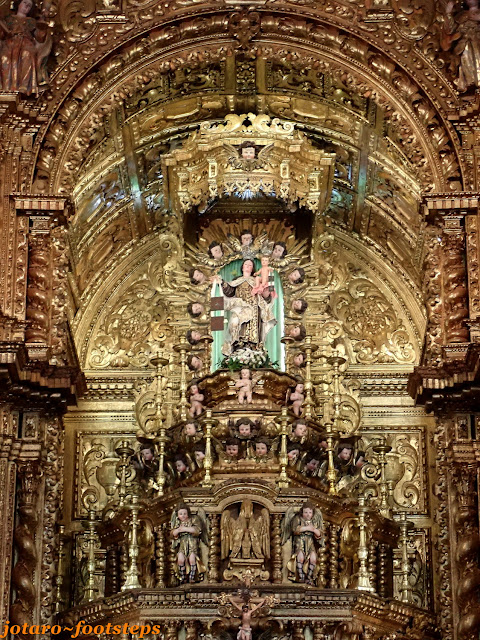 While the shrines are dedicated to saints, the main altar was only flanked by two saints .....
At the rear altar a statue of Mother Mary holding the Infant Jesus is surrounded by angels and many cherubs. 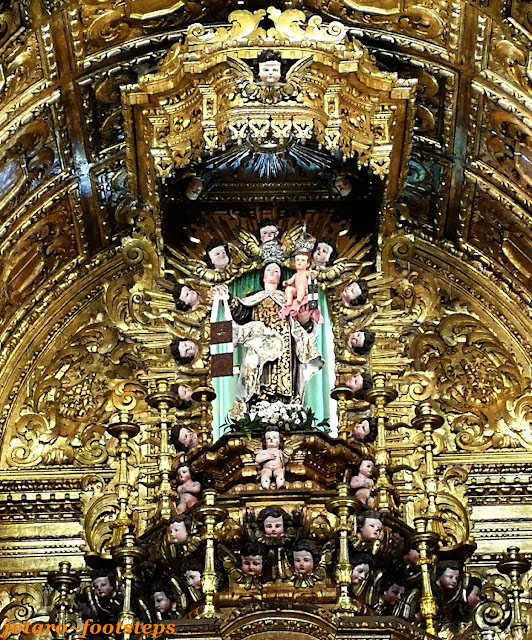 A closer look of the cherubs. I wonder what's the significance of this? It's the first time I have seen so many cherubs at an altar area. 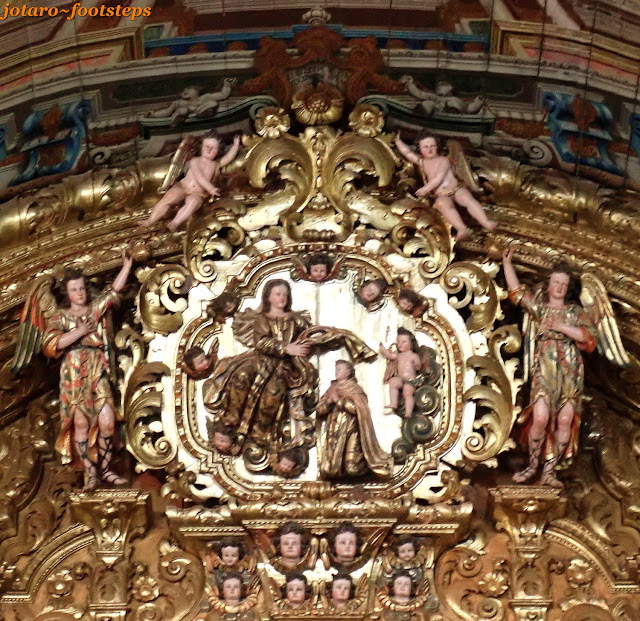 Even the top of the main altar arch has a carving of angels with many cherubs; perhaps this church is dedicated to the Infant Jesus? 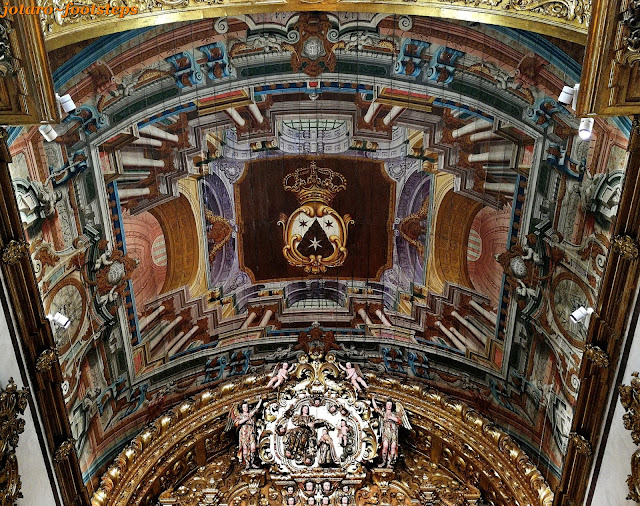 The painting above at the arch ceiling above the altar is simple but colorful.
Construction started in 1719 and exterior was completed in 1878, but the lavish interior was complete 150 years earlier. The Igreja do Carmo has some of the best gilded woodwork to be seen and the work is attributed to master sculptor Manuel Martins. 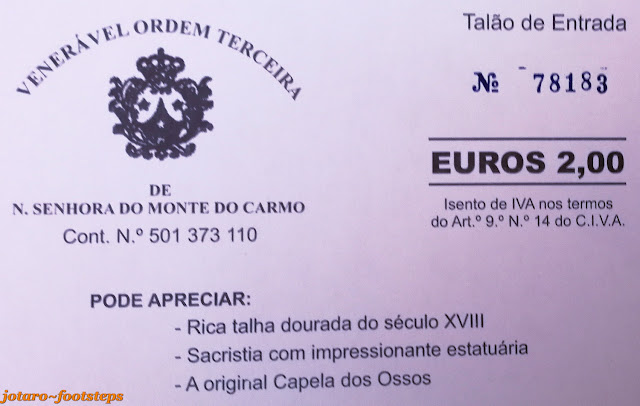 We are ready to visit the Chapel of Bones; to one side of the altar a monk sits at a small desk. He sells the €2/= ticket, which is seen above and printed on it are the text:
Venerável Ordem Terceira- Venerable Third Order.
De n. senhora do monte do carmo- From n. Lady of Mount do Carmo.
Pode Apreciar- Can Enjoy:
Rica talha dourada do século XVIII- Rich 18th century gilt carving.
Sacristia com impressionante estatuária- Sacristy with impressive statuary.
A original Capela dos Ossos- The original Chapel of Bones. 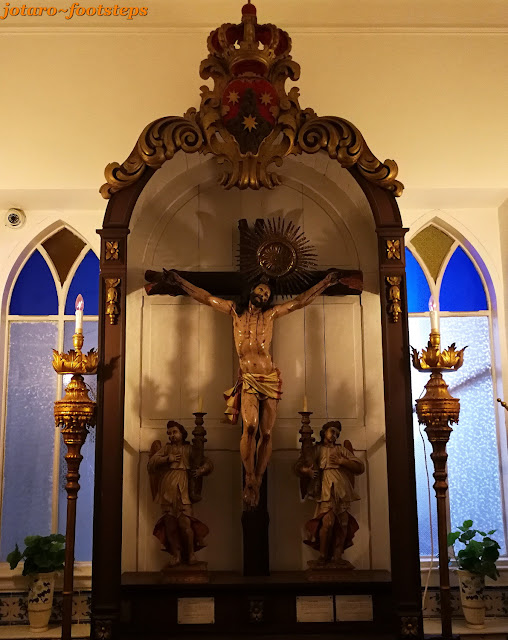 We go through a door next to the altar area and into an area behind the altar. There are several nice paintings here and also a smaller shrine with a Crucifix flanked by two angels. 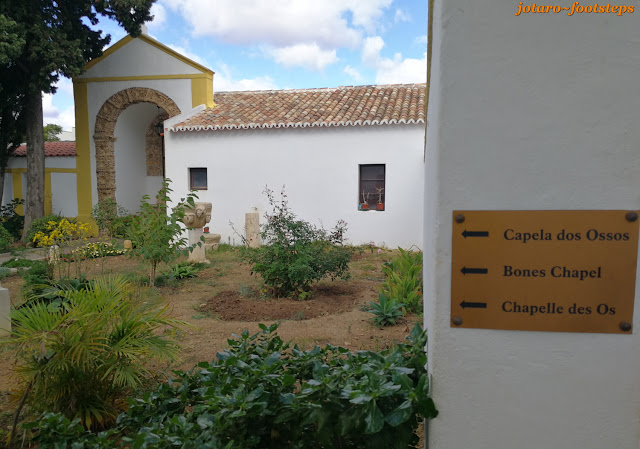 The exit through a rear side door leads to a small garden which is actually a small cemetery. Click here for a satellite view of this cemetery. 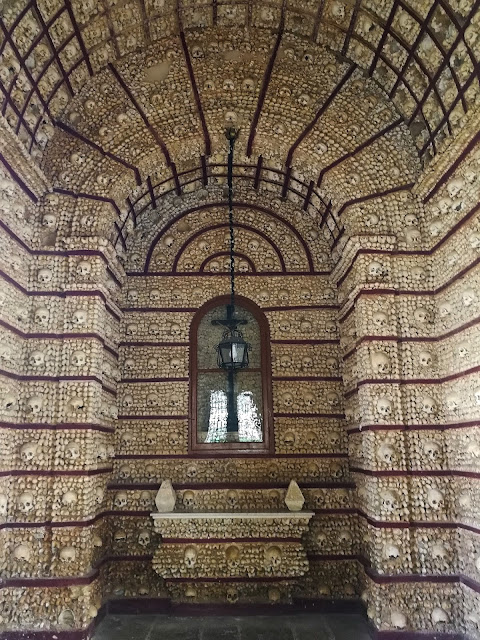 Within this area is the Capela de Ossos (Chapel of Bones) with several small shrines that were built from the bones past 1000 Carmelite friars monks who have served at the church and chapel since it was built. It is situated behind the main church and contains also 1245 skulls. The largest of this shrines even has an altar made from bones! 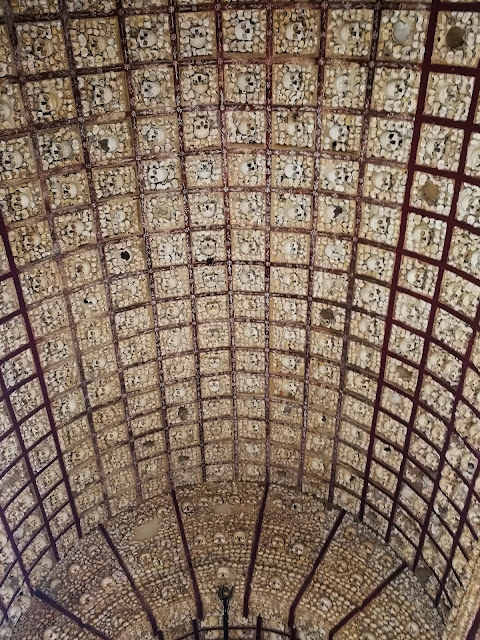 The walls and even the ceiling are lined with bones and skulls. 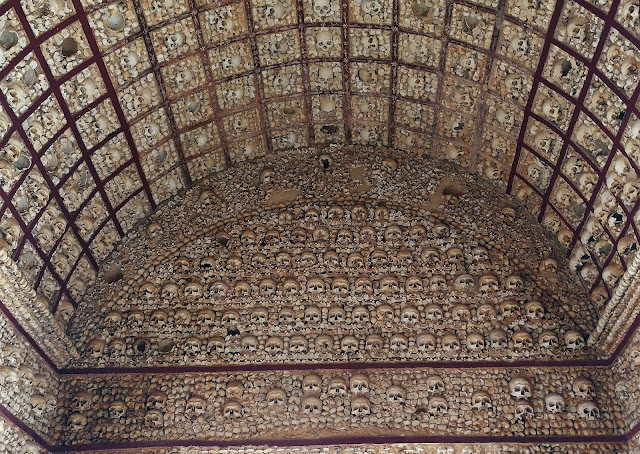 A close up look at an arch wall showing many skulls. The ceiling is divided into squares each containing bones and a skull. 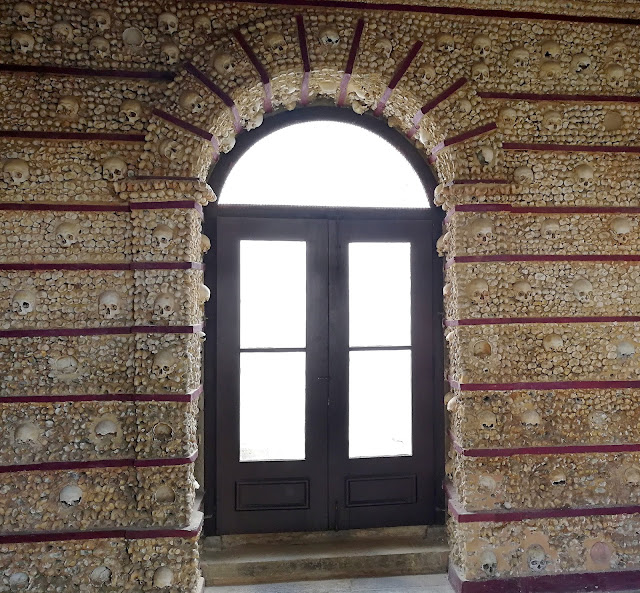 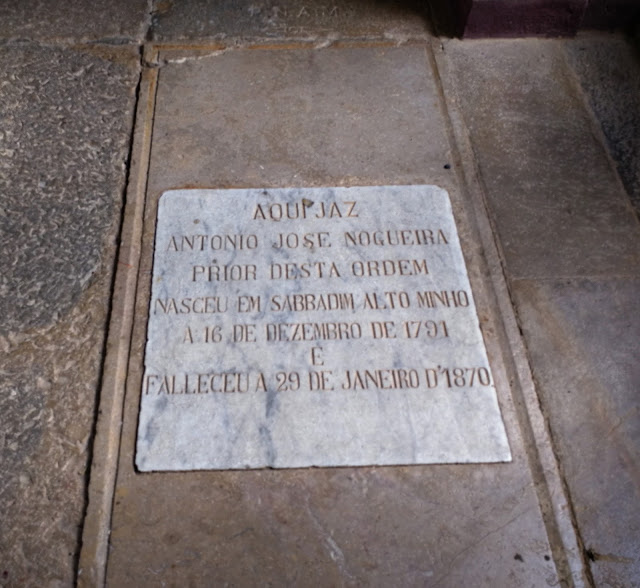 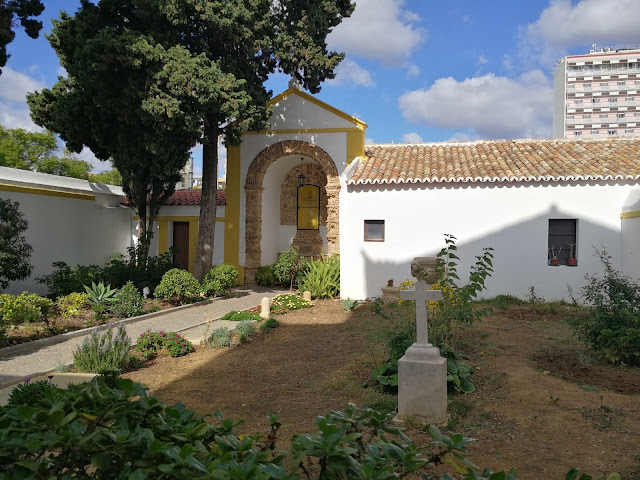 At a far corner seems to be a newer shrine. 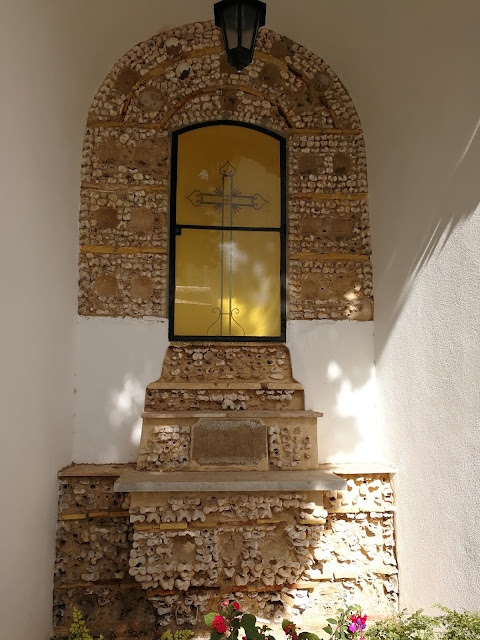 Inside only a small section is lined with bones & skulls, which also form a small altar. 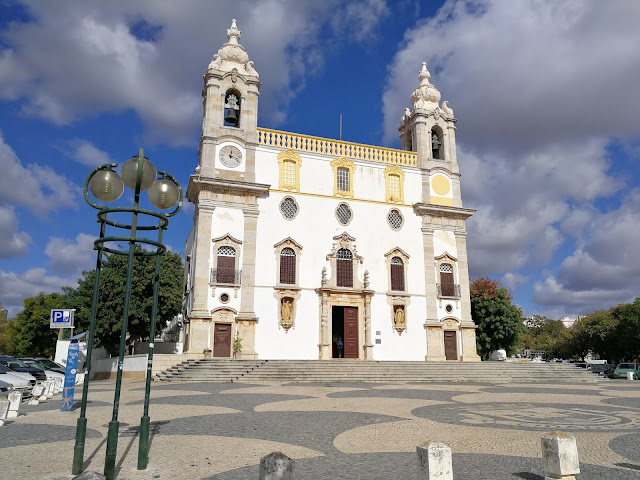