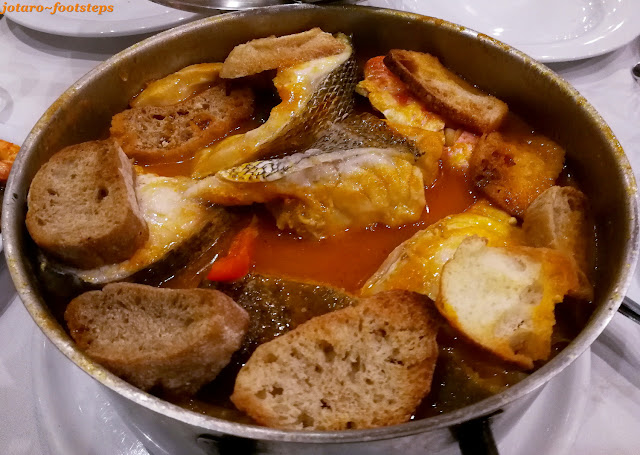 Mira, Portugal - October 2019
A few days earlier we had tried Porto's renown dish the Francesinha, and also some local-style dishes cooked by Mama; now we are in Mira and are keen to try some other Portuguese favourites like the Caldeirada fish stew. Here too we will get to try some Picanha! 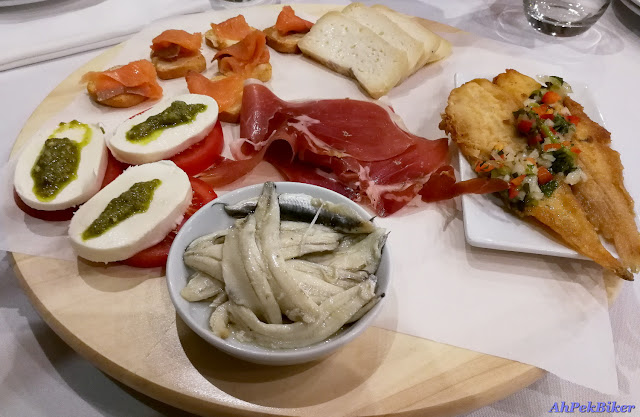 Our dinner started with a bonus; we had ordered their Entre Platter Salgáboca (tabua entrada Salgáboca), a platter of six different regional specialties, and we were pleasantly surprised by the unique presentation on a wooden platter.
The platter included salt-pickled anchovies, two types of cheese, smoked salmon tapas, deep fried cod fish and slices of the renown Presunto, dry-cured ham. 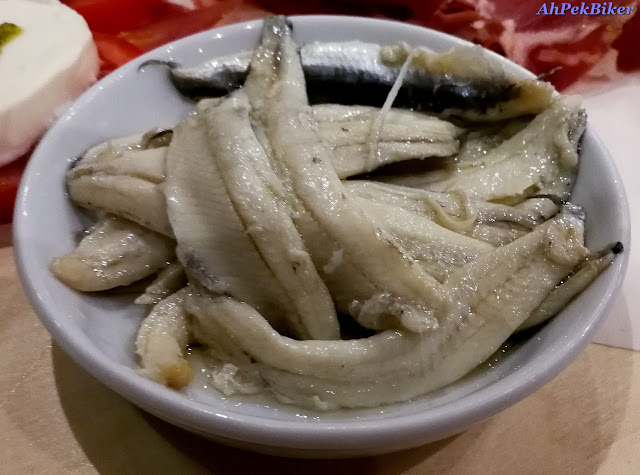 The anchovies were soft yet retained a certain amount of meatiness, their subtle flavour is a good start that leads to ..... 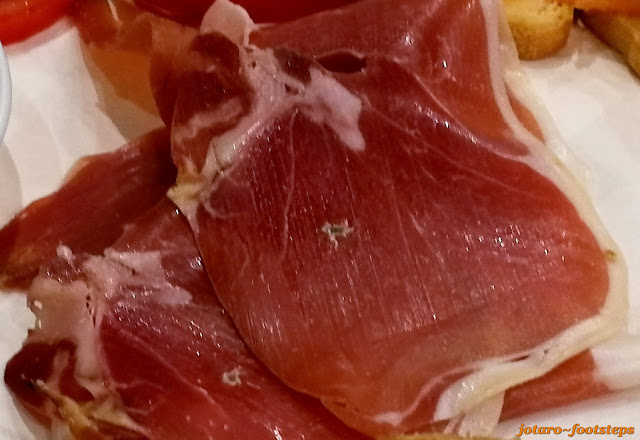 ..... to the heady aroma and addictive taste of the Presunto, an air-cured ham. 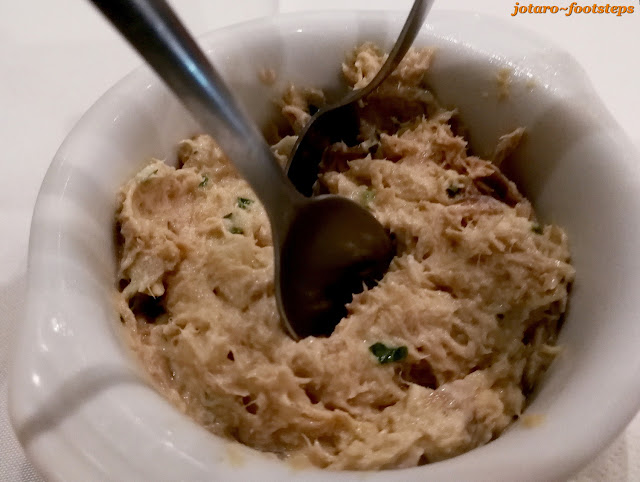 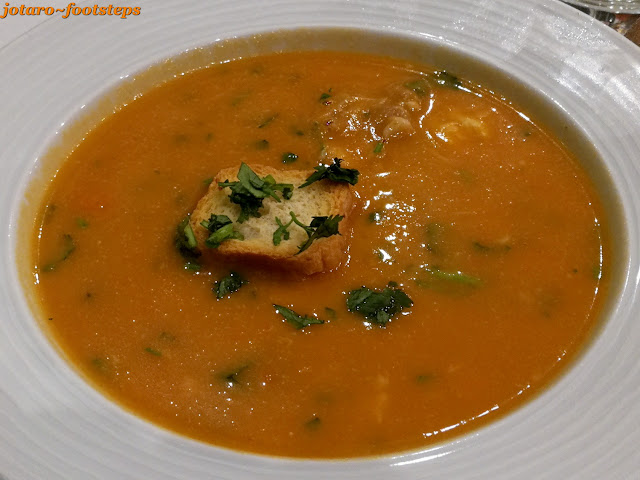 To warm up to the main course, this Sopa de Peixe, cream-free fish soup. We also had the caldo de legumes (vegetable soup). 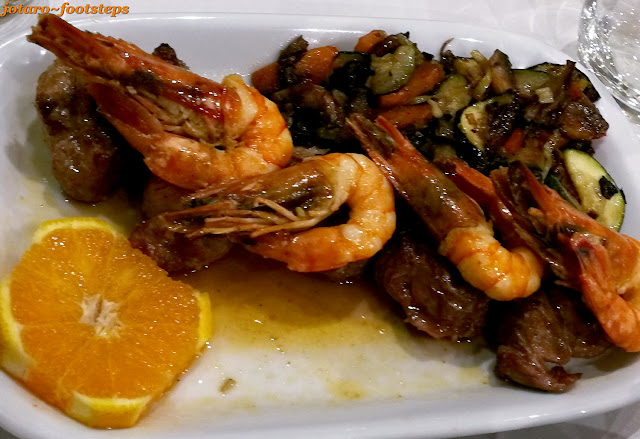 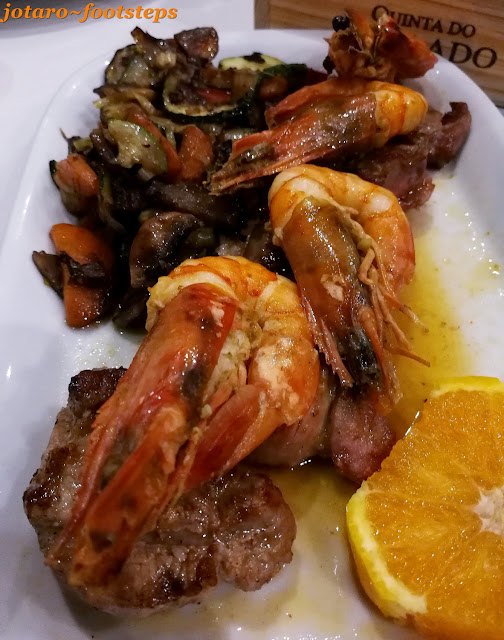 As expected, the prawns were very fresh. That slice of orange on the right was not just for decoration, its juices slowly seeped out to add flavour to the light sauce.
The pork medallions were surprisingly very tender.... Hah! What can I say they are tenderloins after all! 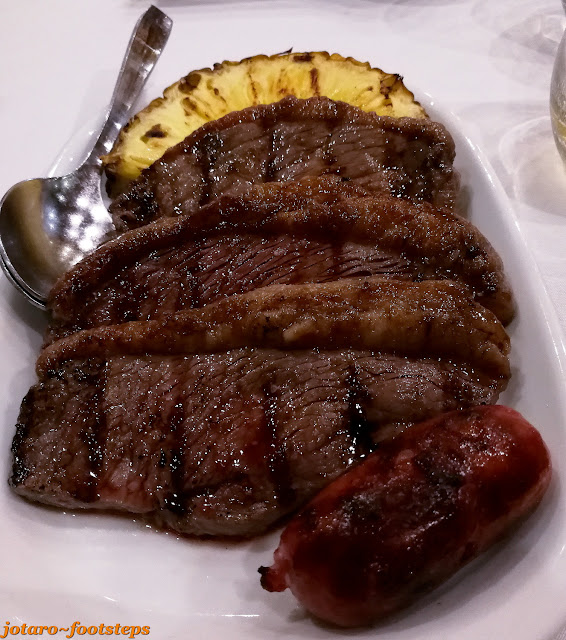 I am not sure why, but the grilled Picanha na Brasa was served with a short sausage. Perhaps it adds a bit of saltiness to the cuts of beef.
The term "picanha" derives from the word "picana", which was a pole used by ranchers in the southern parts of Portugal and Spain, particularly in Alentejo, for herding cattle. This herding technique was then taken to Brazil by Portuguese emigrants and eventually the term "picanha" was adopted to refer to the part where the cow was poked by ranchers. 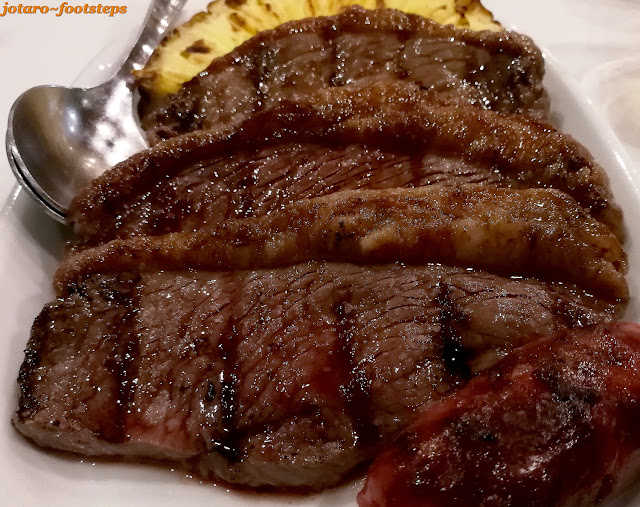 These cuts were the sirloin cap or rump cap with a strip of fat on top. So how does the Brazilian Picanha compare to other renown beef such as the Wagyu or the Angus? The meat was not as tender as Wagyu but still easy to bite into AND it was very tasty and juicy. 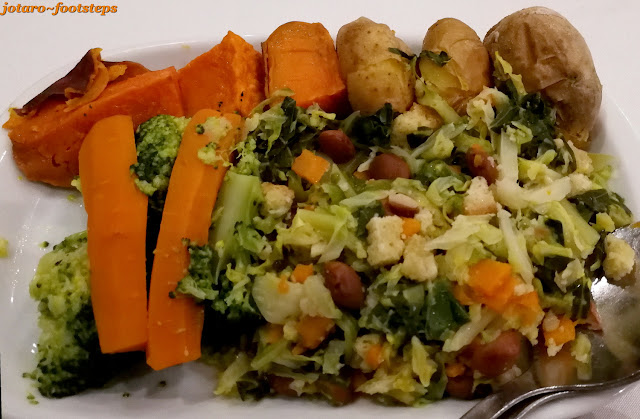 The side dish for the beef - sauteed vegetables that cam with long cuts of carrots and chunky potatoes and sweet potatoes. 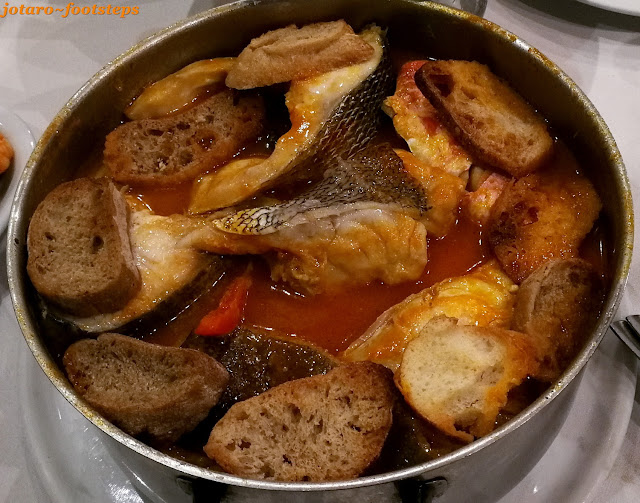 And here comes the pièce de résistance for the evening, the Caldeirada (Caldeirada Peixe) It came in a big pot filled almost to the brim with fish, corn bread and lots of gravy so much so that it's almost like a soup. 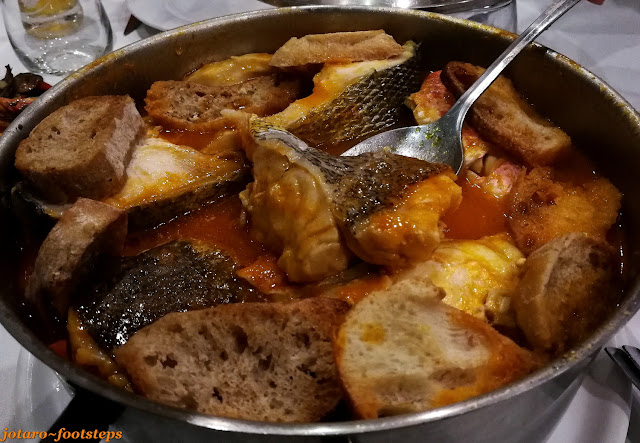 The Caldeirada is afish stew consisting of a wide variety of fish and potatoes, along with other ingredients A fishermen's stew, the dish has been described as "a fish muddle that varies from town to town and depends on what the fishermen have managed to catch." 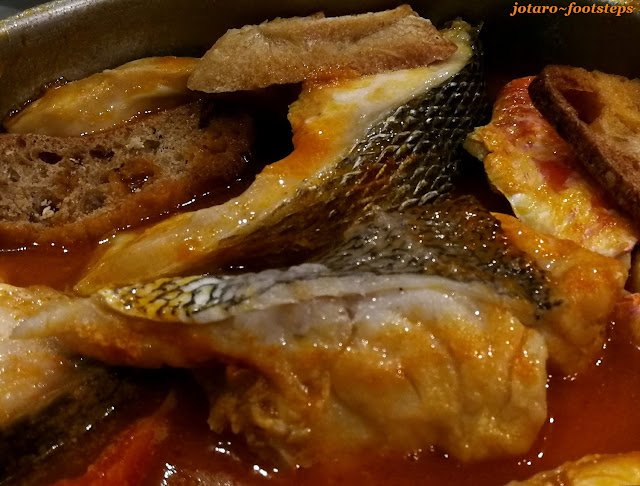 The dish typically consists of "a fifty-fifty mix of lean and oily fish" along with shellfish such as clams and mussels and often squid or octopus as well. The one here used swordfish for the oily fish and - monkfish for the lean fish. 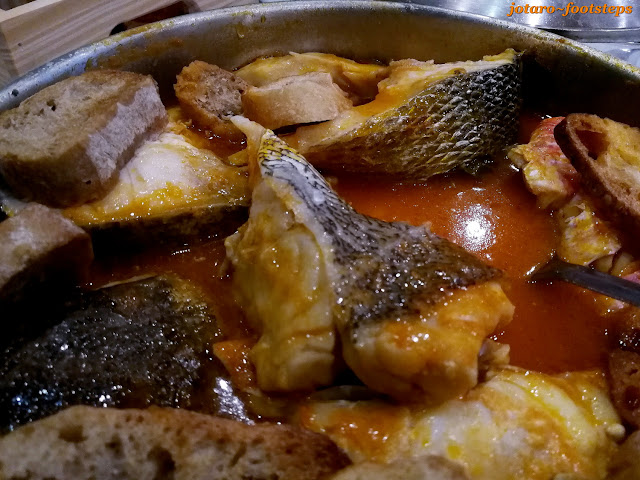 The fish here is super-fresh with firm and tasty meat with skin that still cling on firmly. The gravy looks almost like a curry but is not as spicy, more importantly the flavour of the fish has soaked into it. 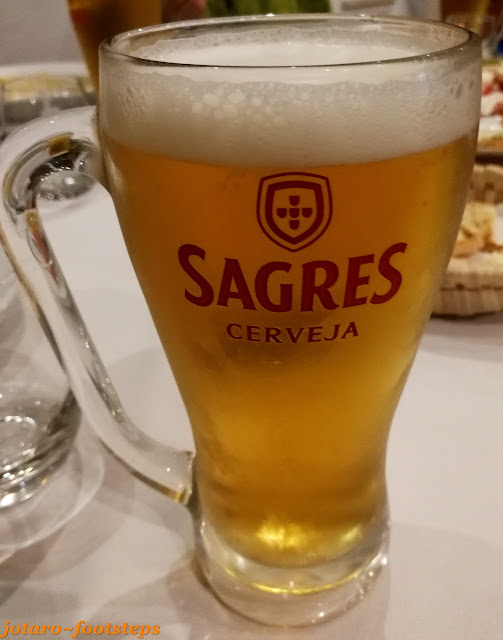 To complement our meal, we had some wine, Sangria and also the Sagres Cerveja beer, it's a pale lager with a aroma is faint but it does have a sweet scent of corn. 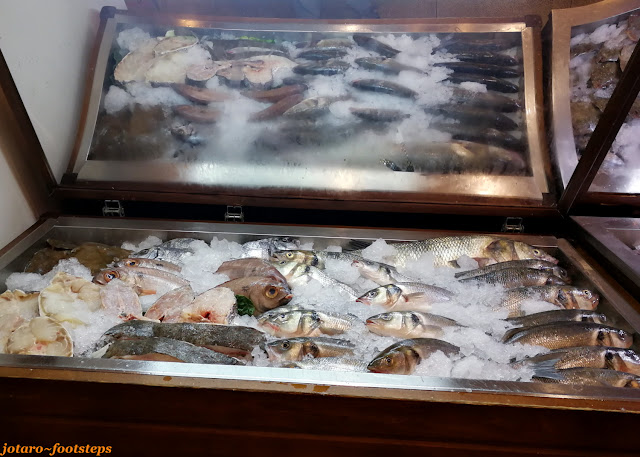 The fish here a kept fresh in an ice-box; you can select your own fish, a top mirror helps for a better view. 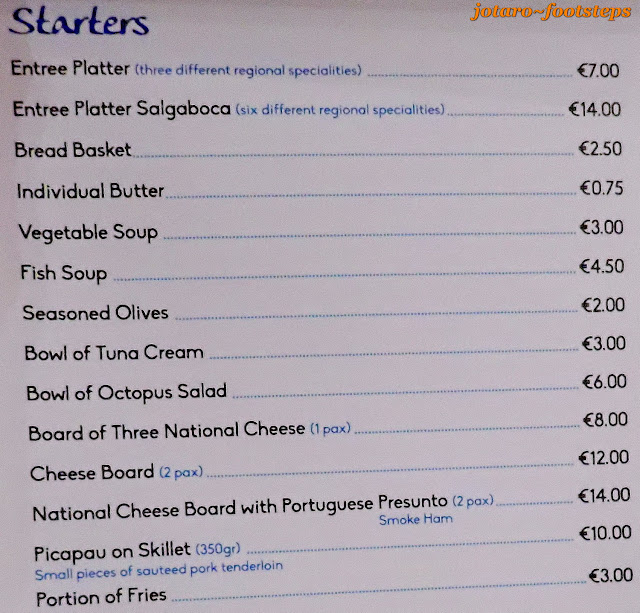 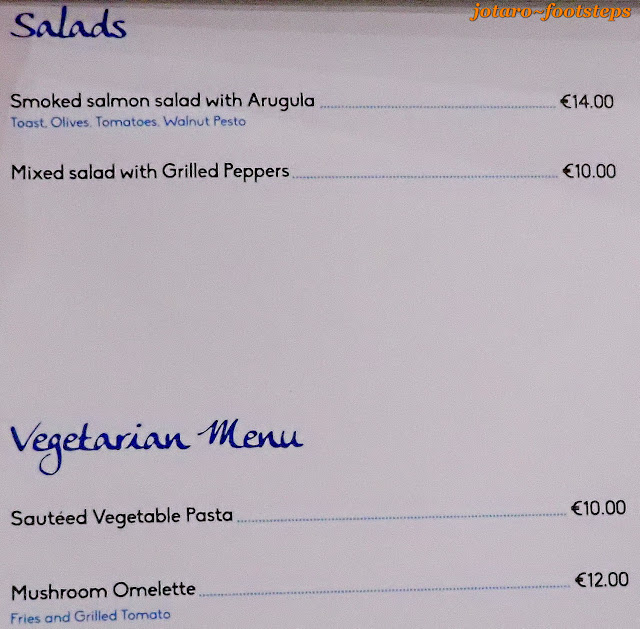 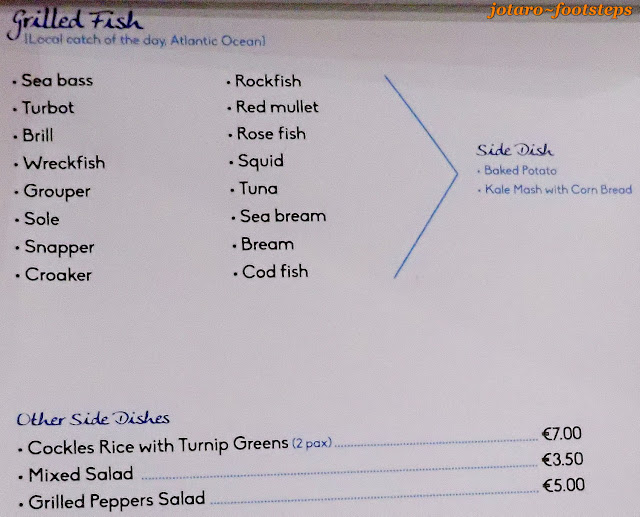 Salgáboca's grilled fish and other seafod menu; they do have a wide range of fishes. 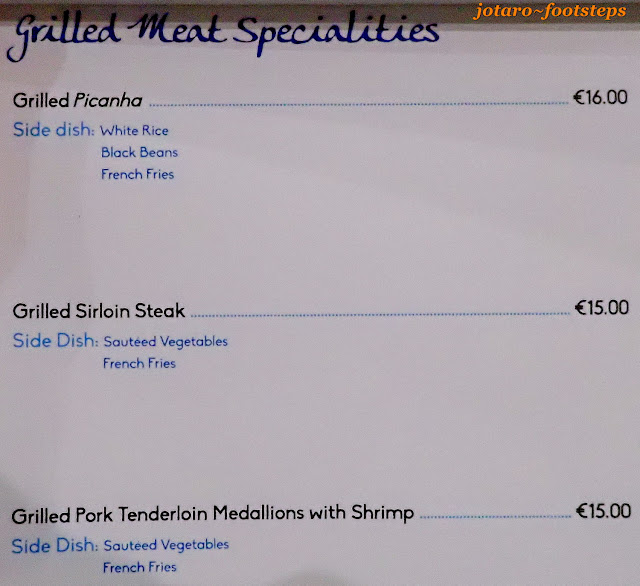 You are at - Jotaro's Blog / Footsteps / YummY! / Western Food / Portuguese Caldeirada Fish Stew & Picanha Beef @ Restaurante Salgáboca Mira
If you like this, view my other blogs at Jotaro's Blog
(comments most welcomed. if you like this pls share via facebook or twitter)
Posted by Jotaro Zen at 2:54 AM