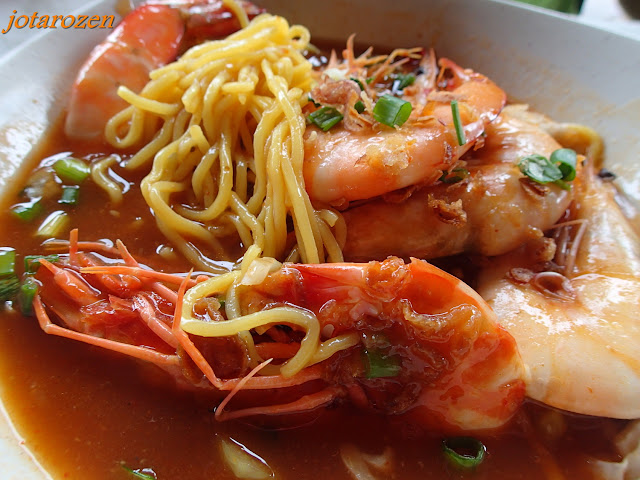 Coming down from a cycling event in Penang (... see CFAL 2013) together with my good friend Tailim (of the hApPy HaPpY blogs), we were looking for a good lunch place. "Shall we go into Taiping town to eat, I asked.
"Why don't we try this other mee place on the other side of the highway?", Tailim posed. Hmmm..... I have heard of that place that apparently serves good mee udang (prawn noodles). That's how we ended up trying Mee Udang Mak Jah - the original one at Kuala Sepetang. 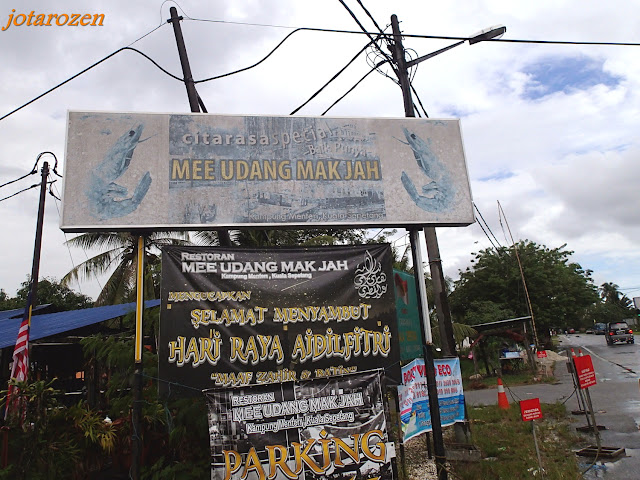 To reach Mak Jah's, from the North-South Highway turn off at the Changkat Jering Exit. From there use the old trunk road (Federal Route #1) until you reach the Simpang town cross junction. Turning right will take you to Taiping town, so instead turn left and drive on for 3.5 km till you reach a T-junction. Turn right here and follow the road for another 3.6 km to another T-juntion, turn left here. Head on straight for another 3.0 km, you will pass a charcoal kiln on the left. Mak Jah is at the next left junction (at Kampong Menteri), you should not miss it as there is a big sign board there. 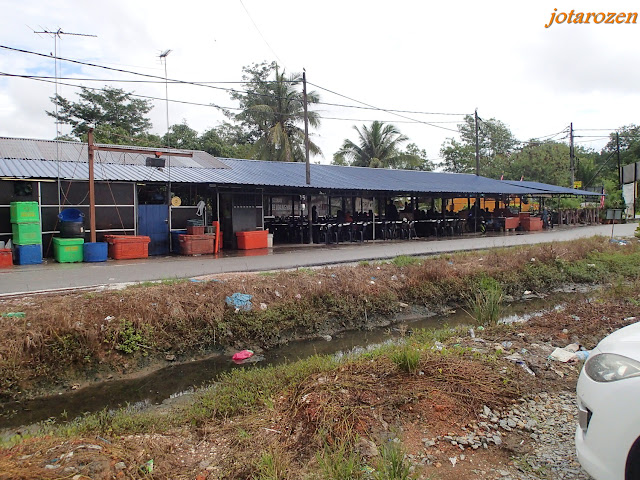 Mak Jah's is housed in a fairly large shed with a dark blue roof, there is ample parking on the opposite side. 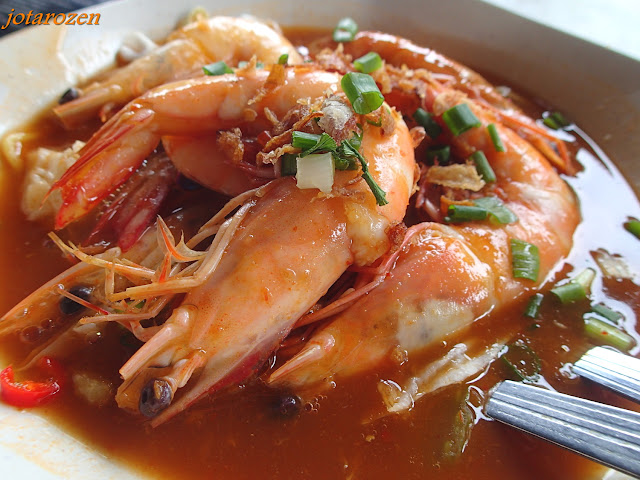 Tailim had the Mee Rebus Special, that's boiled Chinese yellow noodles topped up with savory tomato gravy. It came with so many large prawns that the noodles could hardly be seen. 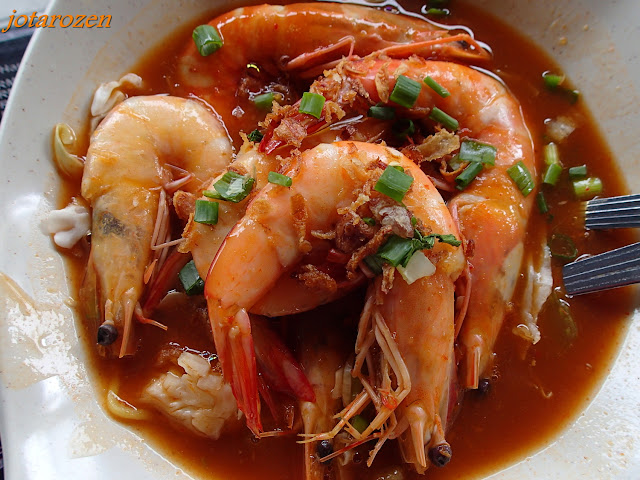 The prawns used are very large and very fresh, as Mak Jah have them delivered daily from the fisherman's wharf. Two kinds of prawns are use - the white-shell (on the left) and red-shell types. Personally, I prefer the white-shell prawns as their meat are softer and tastier. 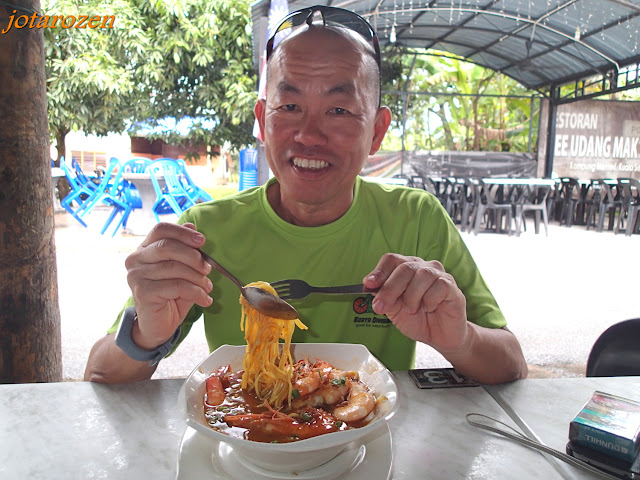 Nevertheless, it must be very good as can bee seen by Tailim's smiling face. I nipped a taste of the gravy from his plate - it's good; thick, slightly sourish and adequately sweet with a strong prawn flavour. 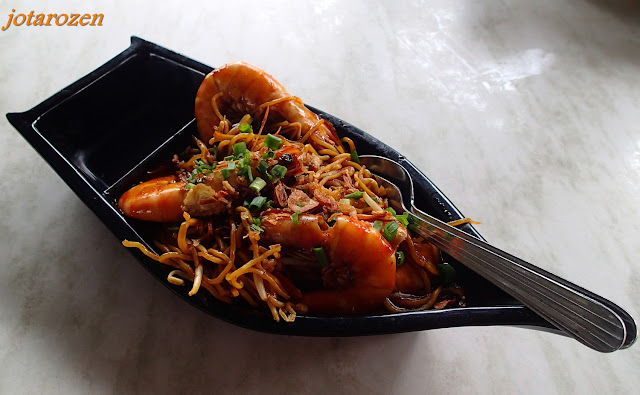 I had the Mee Goreng Special (Fried Chinese Noodles). It was served in an appropriately boat-shaped dish. Cute. 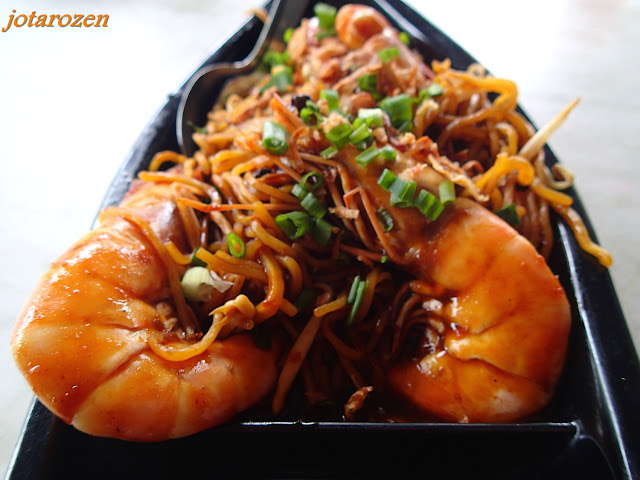 It came with super-duper large prawns too. Fantastic.
Just for note : the Special comes with more prawns, other than that it's the same as the regular. 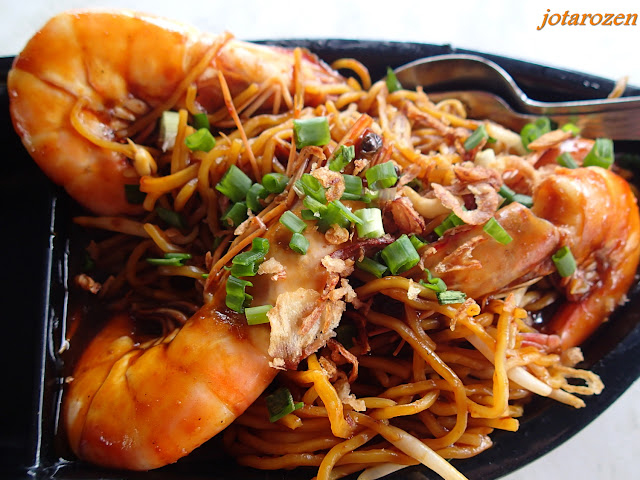 Though done in a fried style, at the bottom was some gravy - sweet prawn tasty gravy. No point having the prawns and not have some prawny gravy. They must have cooked the prawns in the gravy before adding the noodles as there was a strong prawny taste in the gravy too. 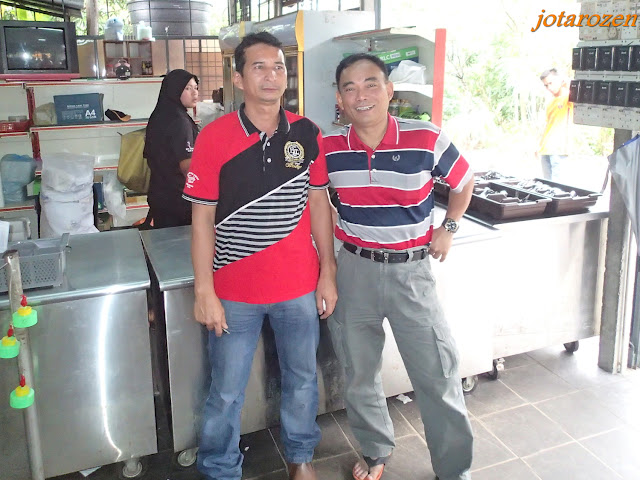 Wanting to take some photos of the kitchen, I asked around for permission. That's when I met Idris, one of Mak Jah's son. I introduce myself as a blogger, stating that it would be good to have a photo of the kitchen. But he did not allow it - understandable though; there are trade secrets to be kept. 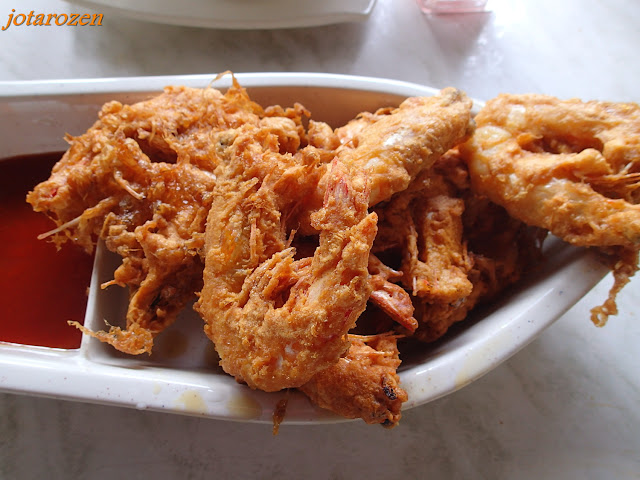 But he did even something better, he treated us to a plate of their "Udang Goreng Tepong Special" - that's Deep Fried Prawns In Batter. 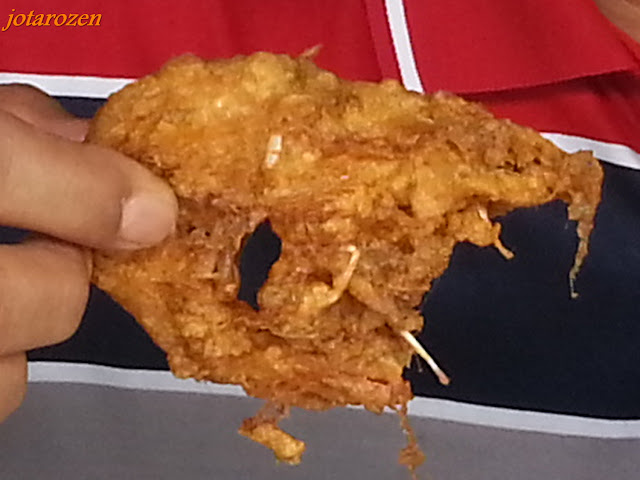 The large prawns are deep fried together with egg batter. The deep frying really did bring out that fantastic, slightly-burnt prawn aroma and taste. And the egg batter is a real good idea, soft but slight crispy at the edges, it is much better than a hard flour batter. 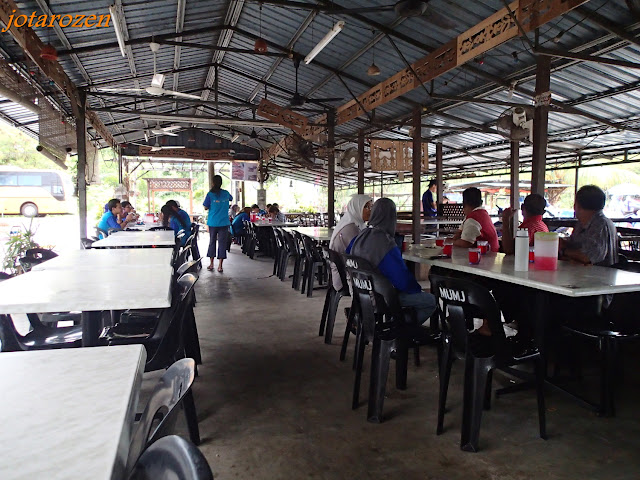 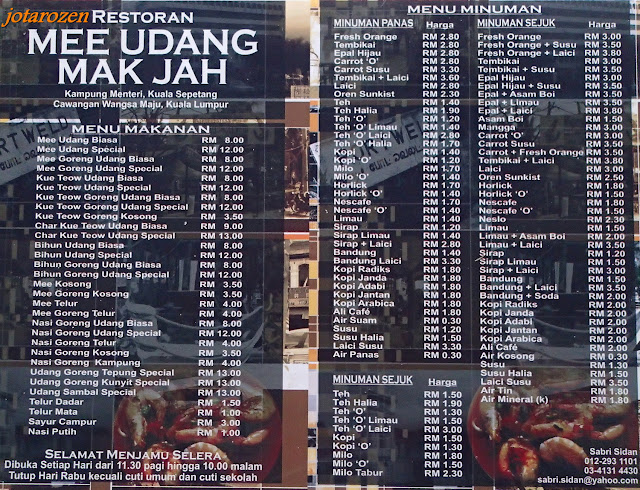 They have quite a comprehensive menu for both food & drinks.
Note: They have a branch at Wangsa Maju, according to Sin it's just as good. The prawns are fresh too, being shipped daily from Kuala Sepetang.

You are at - Jotaro's Blog / FootSteps / YummY! / Malay & Indian Food / Prawn Noodles @ Mee Udang Mak Jah
If you like this, view my other blogs at Jotaro's Blog
(comments most welcomed. if you like this pls share via facebook or twitter)
Posted by Jotaro Zen at 3:59 AM