Footsteps - Jotaro's Travels
Taiwan National Palace Museum: 2nd Floor Gallery 203b
(Antiquities Special Exhibition 02) - November 2017
The National Palace Museum, located in Taipei and Taibao, Taiwan, has a permanent collection of nearly 700,000 pieces of ancient Chinese imperial artifacts and artworks. Gallery 203b (Antiquities Special Exhibition 02) that looks into collections from the court of the Ming Emperor Yongle (1360-1424).
This blog comes in several pages, this is Gallery 203b of the second floor galleries, click below to navigate to other sections:

The reign of the Ming Emperor Yongle (朱 棣) (1402-1424) witnessed major advances both culturally and military, including the construction of the vast Frobidden City and many major naval expeditions to explore and have cultural exchange with the rest of world. There was also the production of numerous fine and beautiful imperial wares, including the renown Blue and white (青花) Qīng-huā porcelain. Just as the rest of the world admired and adopted some Chinese art styles during cross-culture exchange, the Chinese too adopted some of the foreign art styles. This gallery and the following artwork (unless otherwise stated) showcases the fine artwork that was collected and promoted during the Yongle Peiod. 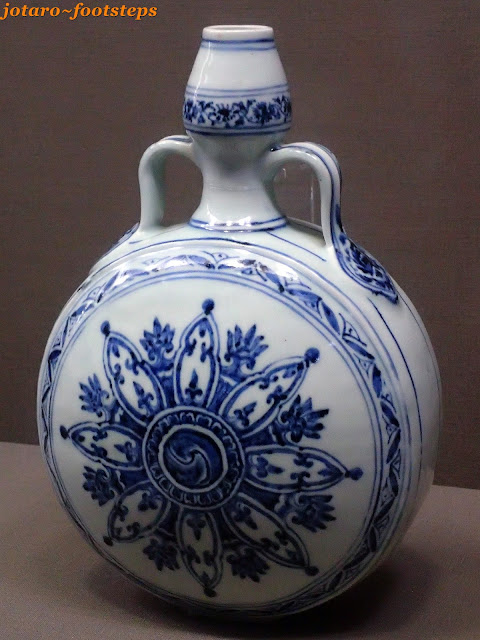 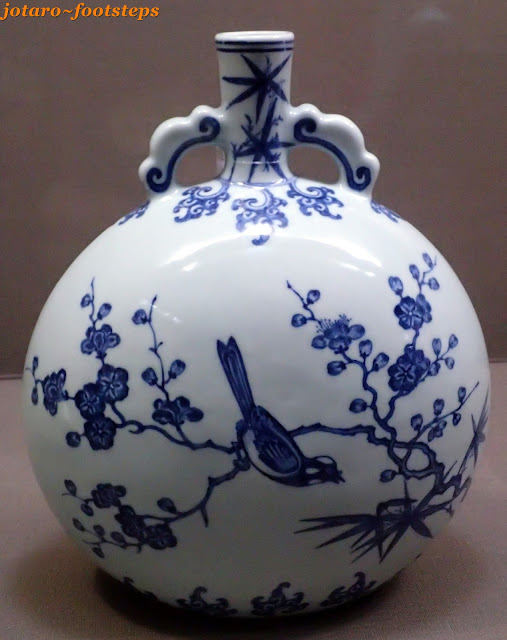 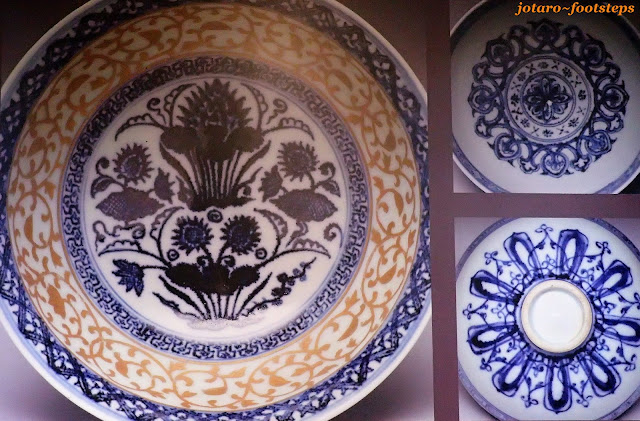 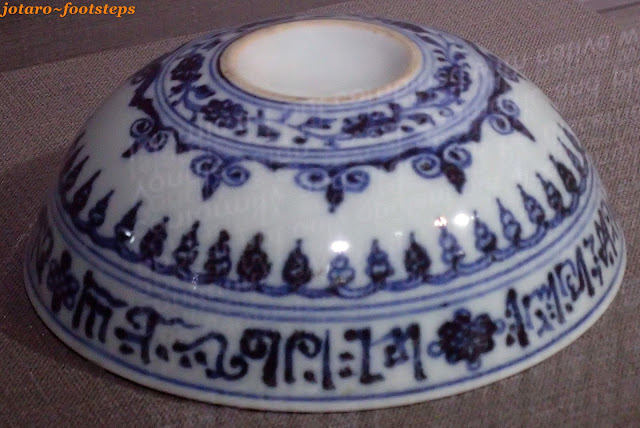 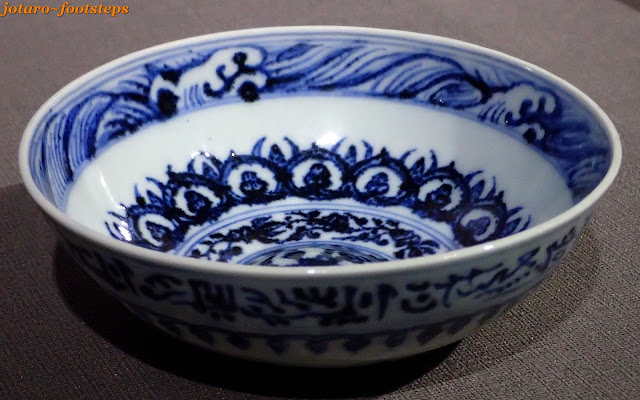 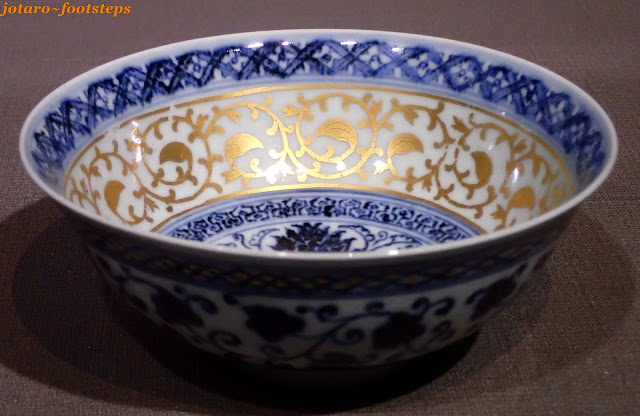 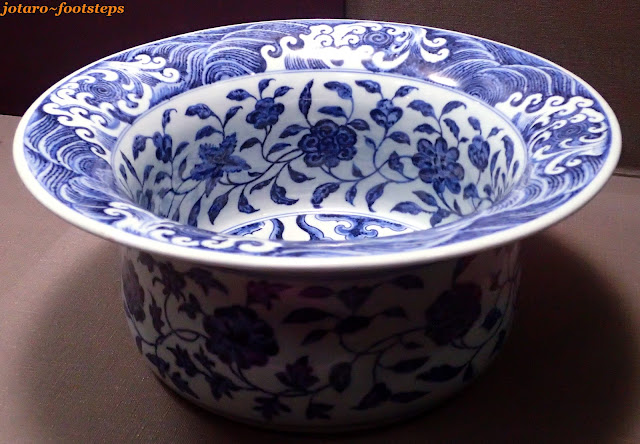 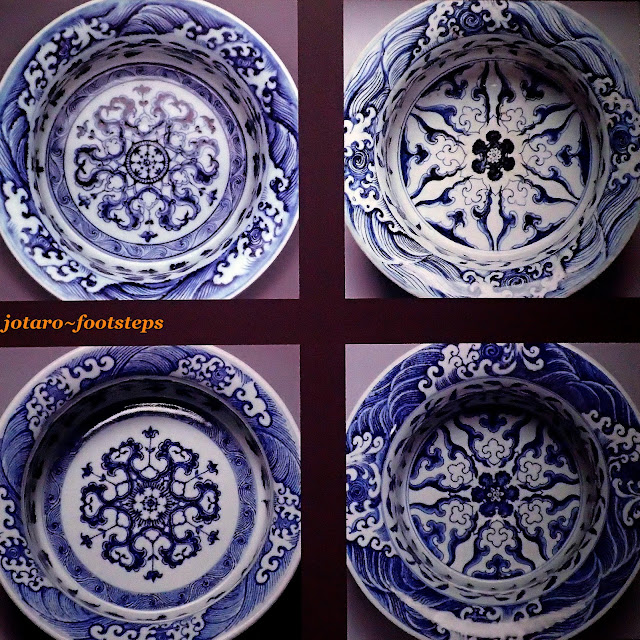 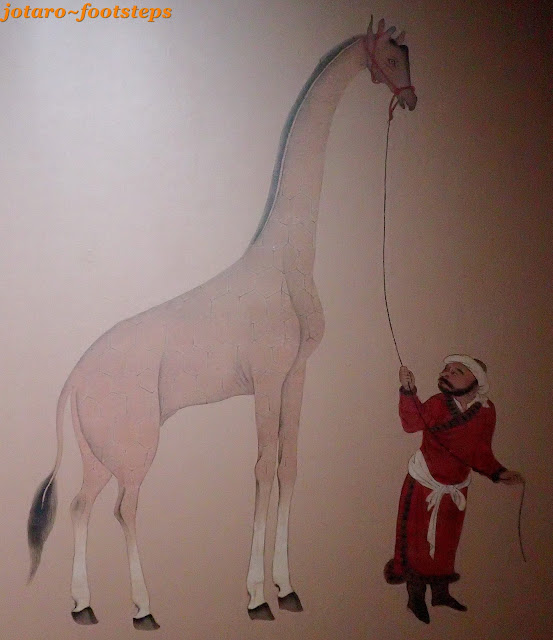 Painting Qilin with Indian guide.
In 1424, the King of Bengala (around the area of modern-day Bangladesh) sent a mission to the Ming court with a reciprocal exchange gift of a "qilin". From the painting and records left behind we know that the so-called qilin was actually a giraffe. 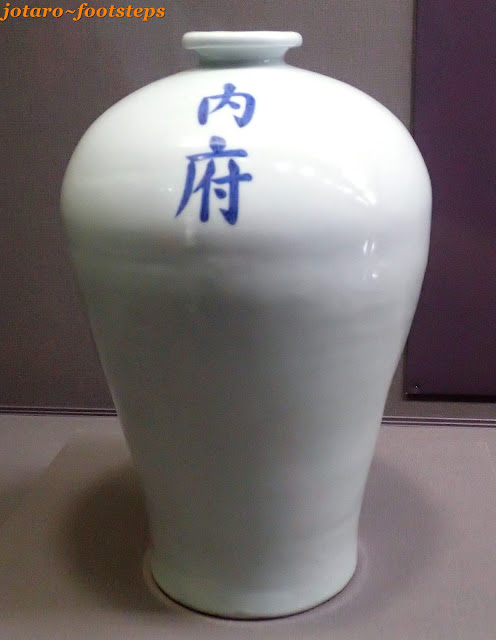 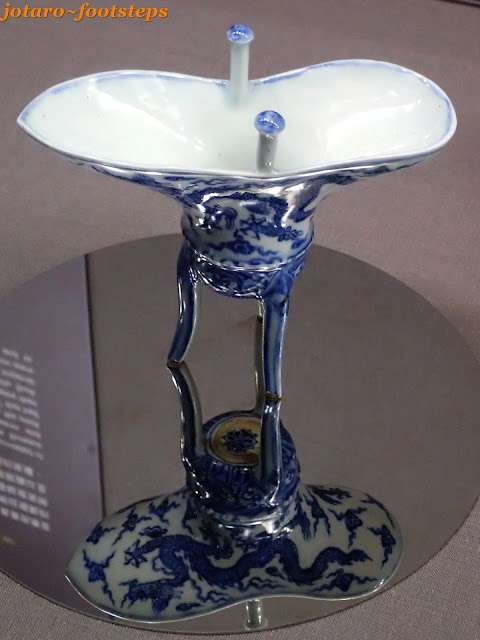 Jue cup with dragon & waves blue  - Blue and white (青花) Qīng-huā porcelain.
A jue is a shape of Chinese ritual bronze, a tripod vessel or goblet used to serve warm wine. It was used for ceremonial purposes by the Chinese of the Xia, Shang, and Zhou dynasties. Often the jue had a handle, sometimes in the shape of a dragon. It also has two protuberances on the top of the vessel, which were probably used when lifting the vessel out of heat. 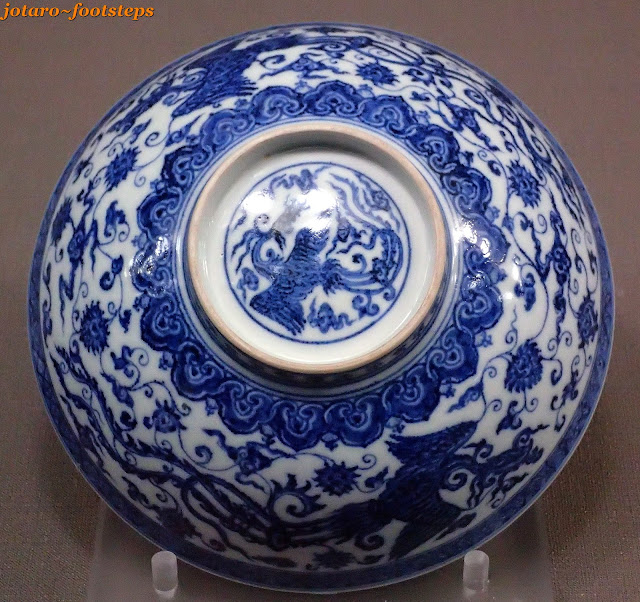 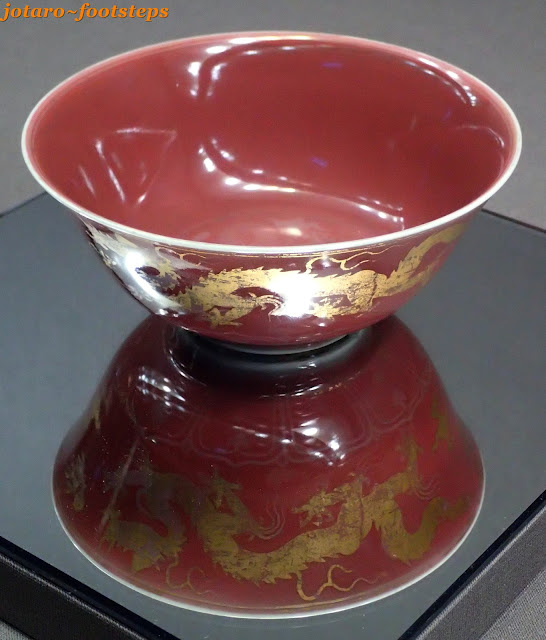 Bowl ball-chasing paired gold dragons on red background - red glazed porcelain from Xuande (宣德帝) (1425-1435) reign Ming Dynasty.
Red glazed porcelain features copper as a colouring agent, its vibrant hue the result of firing at high temperatures in a reduced atmosphere. Because of the sensitivity to variations in temperature and oxygen levels during the firing, even the slightest problem can make it impossible to yield a pure bright red colour. As a result, traditionally it is one of the most difficult porcelain to fire successfully. Starting in the Yongle reign, the Jingdezhen kilns (景德镇陶瓷) were able to fire porcelains with such pure glaze hues. 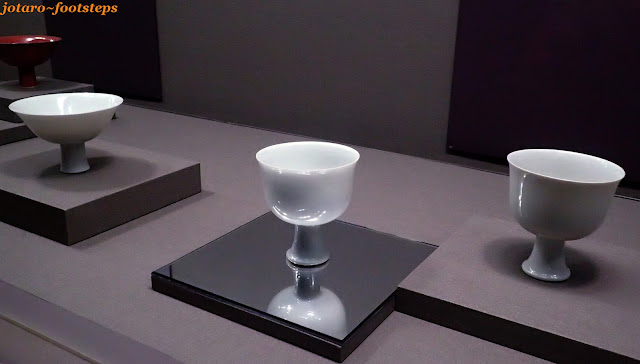 Stem cups with lotus & eight treasures - sweet-white glaze porcelain.
White-glazed porcelain of the Yongle period is noted for it's refined white body and warm glaze, that is soft and lustrous. Renown for its pure white glaze, this ware later earned the name "sweet-white" (甜白瓷). The term originated among the literati of the late Ming Dynasty, because the technique for refining white sugar had been discovered in the Jiajing (嘉靖) (1521-1567) era Consequently, the sweetness of refined sugar with it's whiteness like snow were used to describe the pure, warm quality of Yongle white-glaze porcelain. 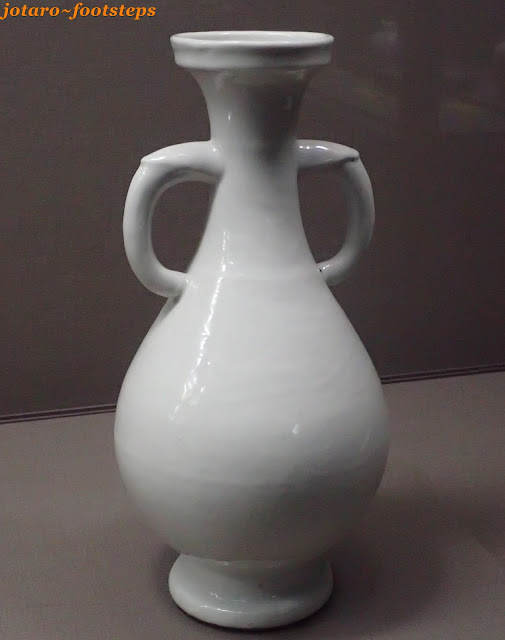 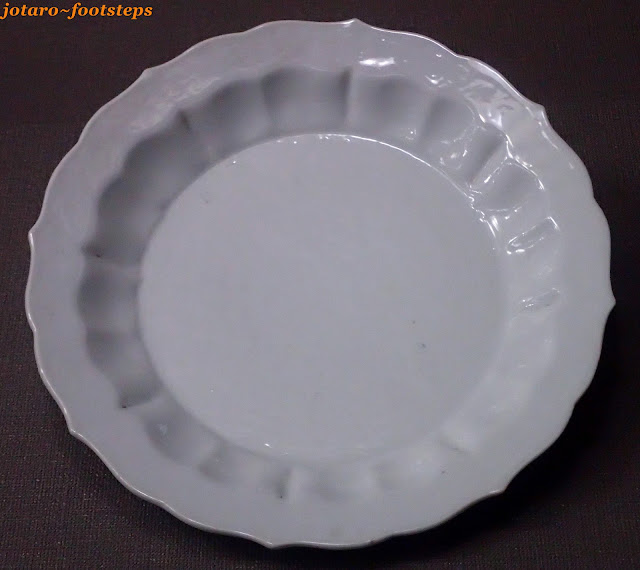 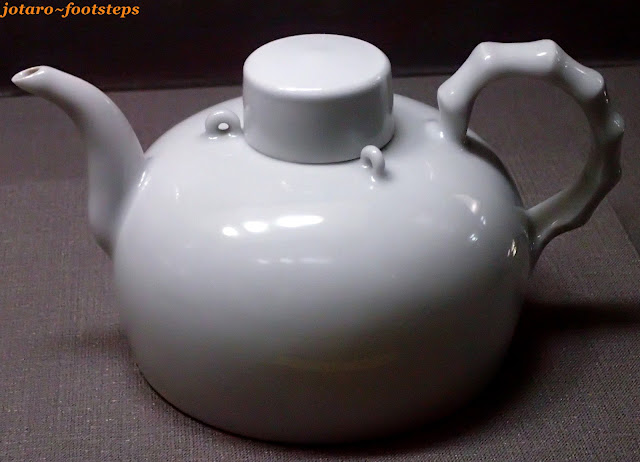 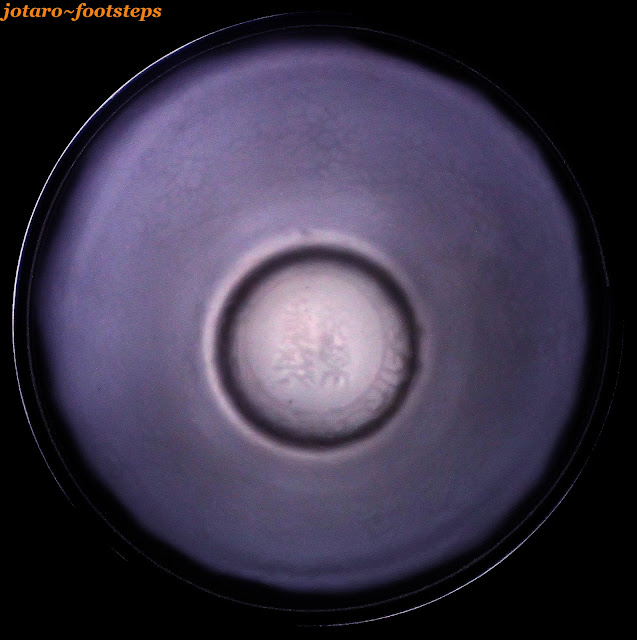 Tea cup with incised decoration at it's inner side walls and the bottom of its inner base.
Incised decorations are decorations hidden under the glaze of sweet-white porcelain, appearing almost invisible to the eye. However, when light is shone at certain angle, a glimpse of the decoration becomes faintly apparent. 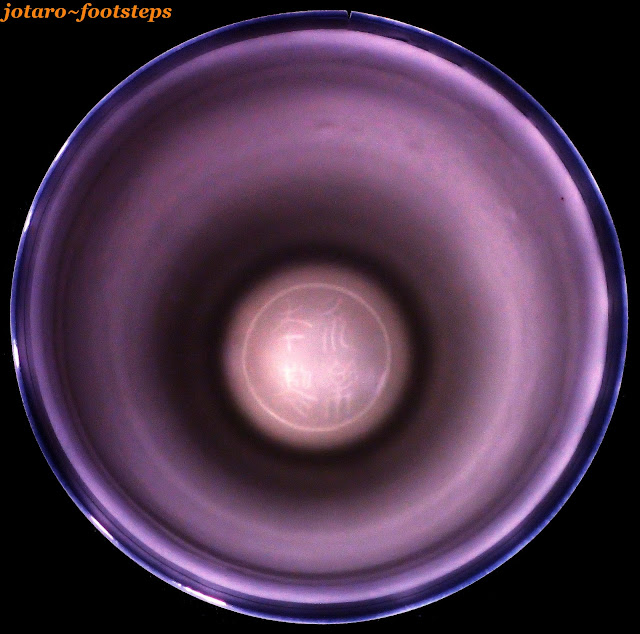 Tea cup with incised decoration at the bottom of its inner base. 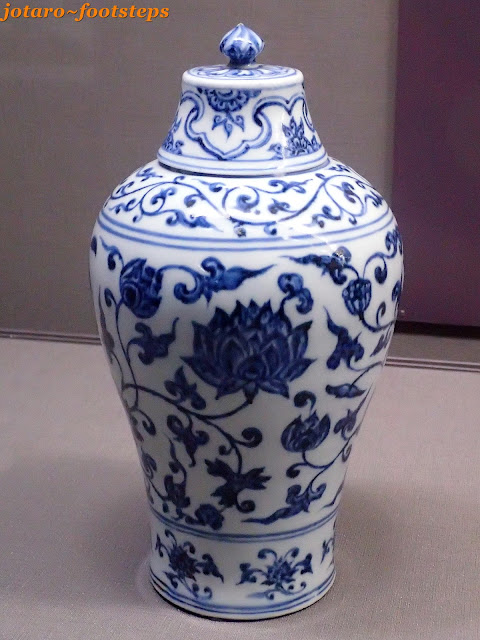 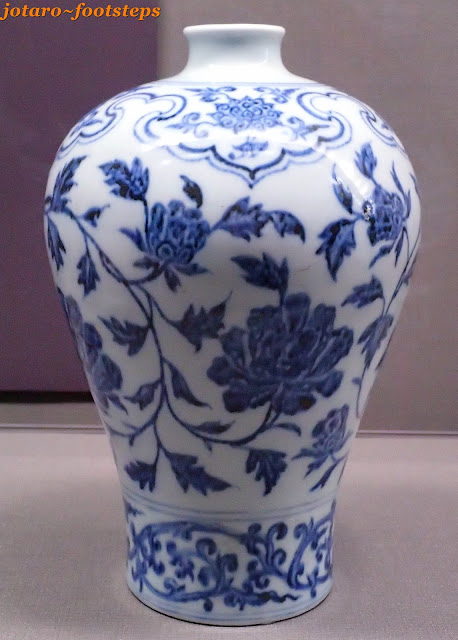 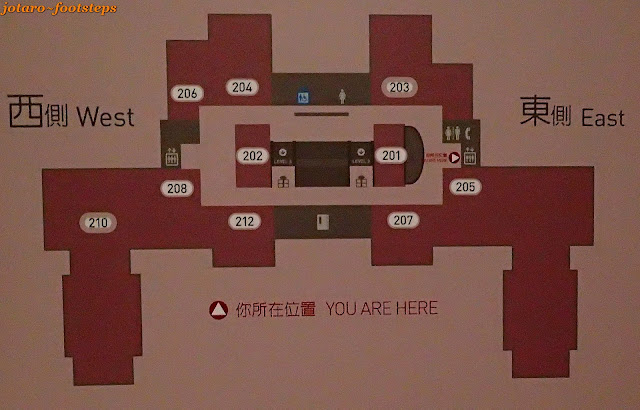