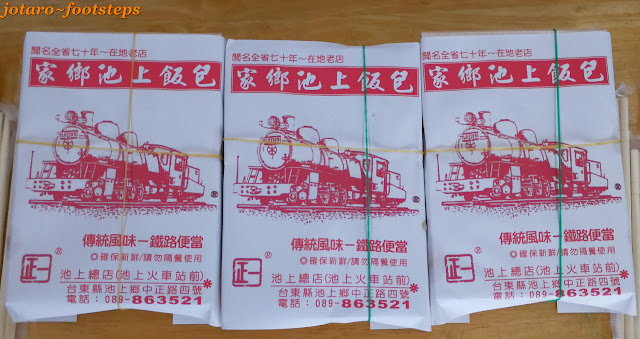 Chihshang Town, Taitung County, Taiwan - October 2017
On our cycling tour of Taiwan, we had cycled from Luye (鹿野鄉) to Chishang (池上鄉) and enjoyed the beautiful scenery of the padi fields there. The area here is famous for the good rice harvested from these paddies. So when we reached Chishang we just had to look for some meal with this rice; and it was just not the usual meal with individual dishes, but a meal quite distinct to Taiwan - TAIWANESE RAILWAY BOX MEALS! 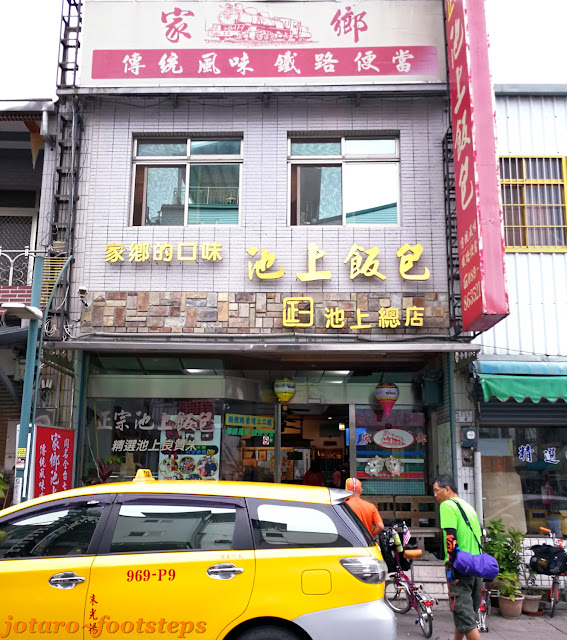 The railway box meals are usually sold on the trains; but at many of the towns especially in this rice-growing area, can be found shops selling this meals-in-a-box, something akin to the Japanese bento boxes but a simplified and cheaper version for the working man on a rush to catch the next train. The Taiwan version is called biandang (臺鐵便當), basically meaning "Taiwan Rail Lunch".
At Chishang, we found this shop, the Chishang Jiaxiang Fangbaodian shop (家鄉池上飯包). It's located just down the road from the Chihshang Train Station. There is no missing this shop as right at the top is their conspicuous sign with a red steam locomotive.

I believe that near many other train stations in this region are similar shops selling this meal boxes. Just look out for the familiar red locomotive! 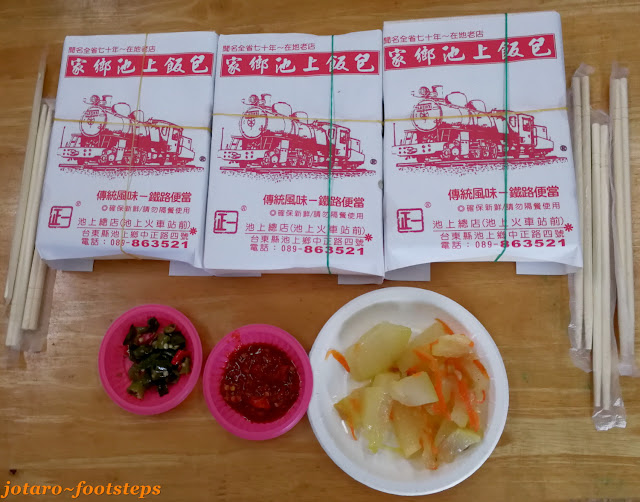 The meal box came in a veneer thin ply box half wrapped with a paper wrapper with the red locomotive logo. It comes with disposable wooden chopsticks, some pickled vegetables (radish, carrot and cabbage) to provide a balance diet. There are also some cut and ground red chili. We were eating-in at the shop; usually the meals are take-away and the pickles and condiments are packed in separate containers. 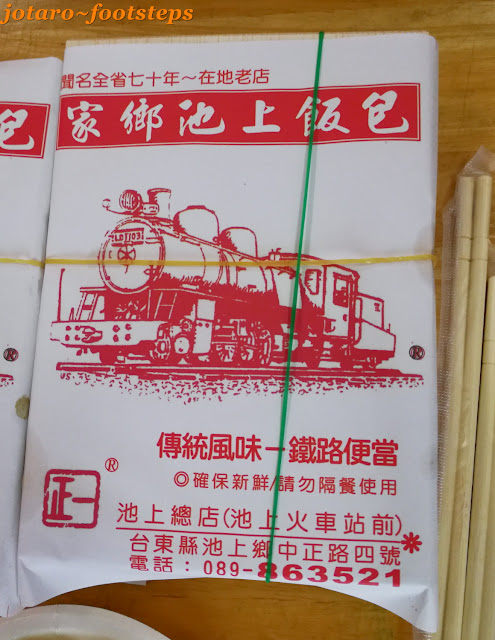 It's a simple wrapping for take-away, the thin-ply wooden box is bound in the paper wrapper with just a couple of rubber bands. Each box meal cost NTD80, reasonably priced for the blue-collar workers who usually take the train. 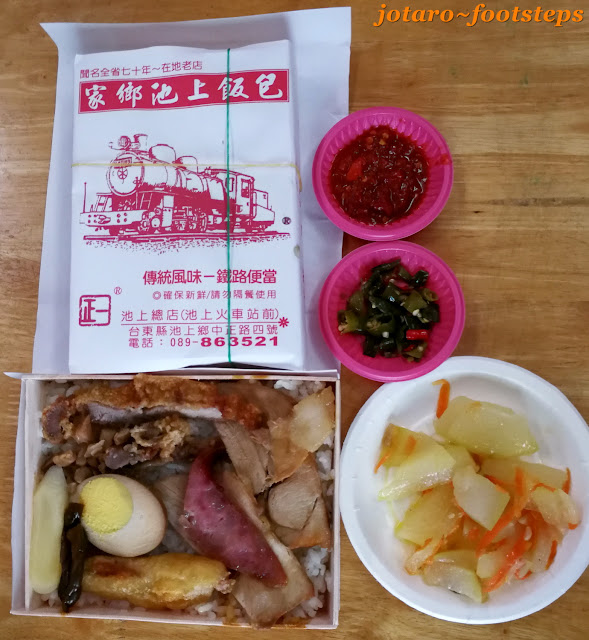 Easy to unpack for the hungry traveler. So what's inside? 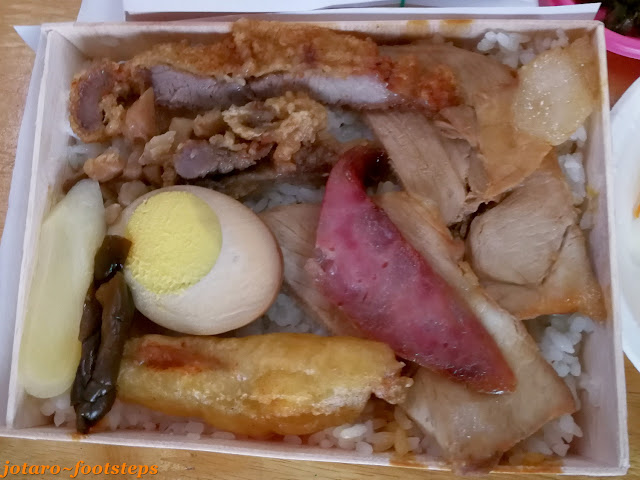 Here's a closer look. Inside were a few pieces of chicken chop fried in breaded batter, a piece of steamed chicken, slices of soy stewed pork, a small slice of sweet Taiwan Sausage, half a hard boiled egg (which had been cooked soy so that it's outer layer is brownish), a slice each of leek and mushroom. It's a simple yet wholesome balanced meal. 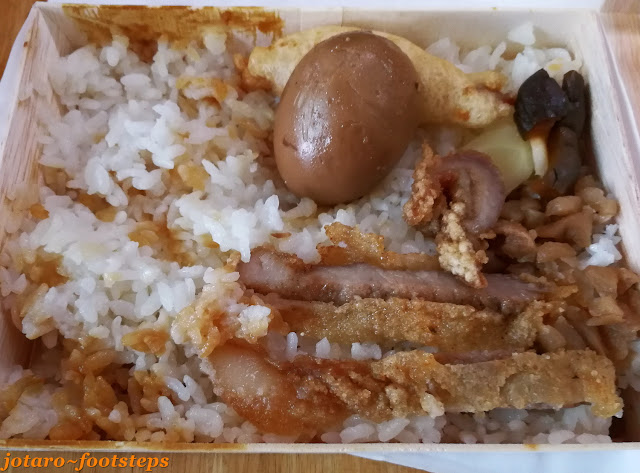 It looked like a dry meal until one stirs the whole combo, inside the rice had been partly soaked in a soy-pork gravy. Taste wise it was good and most importantly easy to eat without making a mess as there were no bones to be disposed of. 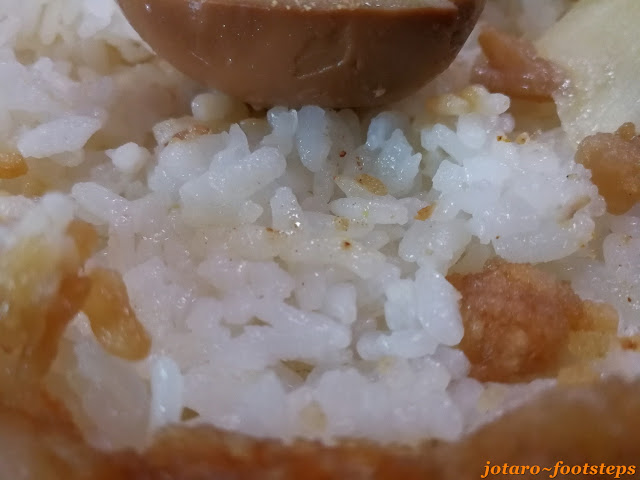 Since we were in the Chishang region, our meal came with a bonus - fragrant pearls of the white unblemished rice! These were short and round grains almost similar to the Japanese Japonica Rice. 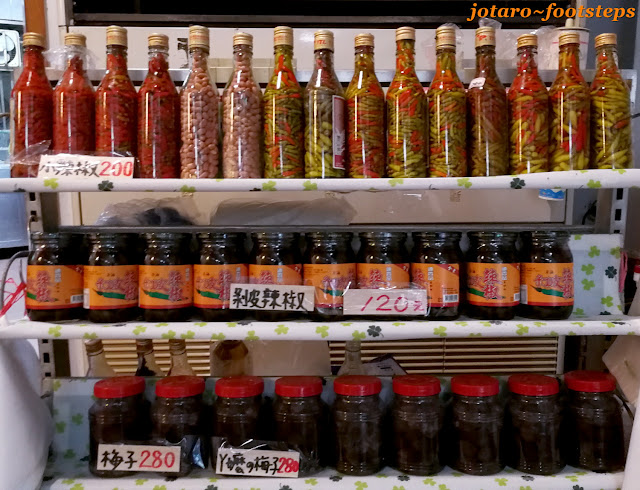 The shop here also sells bottles of pickles for those who love their pickles. 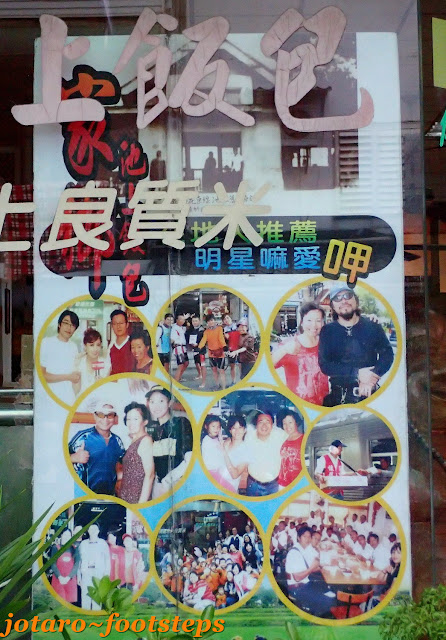 Right at the front of the shop was a montage of photos showing Taiwanese celebrities patronizing the shop. 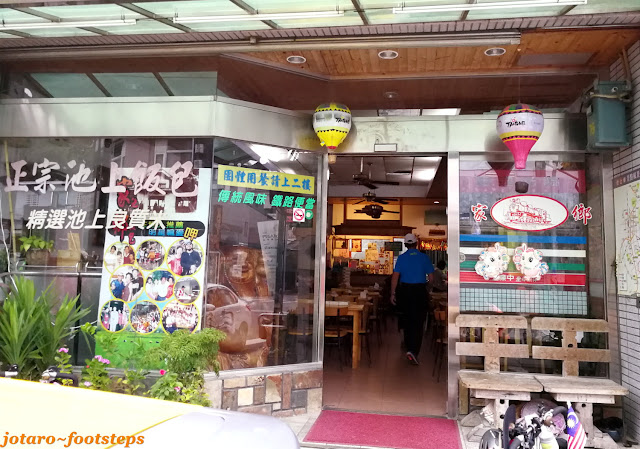 You are at - Jotaro's Blog / Footsteps / YummY! - Cycling Taiwan 2017/ Taiwanese Food / Taiwanese Railway Box Meal (臺鐵便當/biandang) @ Chishang Jiaxiang Fangbaodian (家鄉飯包)
If you like this, view my other blogs at Jotaro's Blog
(comments most welcomed. if you like this pls share via facebook or twitter
Posted by Jotaro Zen at 10:55 PM