Footsteps - Jotaro's Travels
Taiwan Aboriginal Art @ Dawu (大武鄉) & Taimali (太麻里鄉)
Dawu & Taimali, Taitung County, Taiwan  - October 2017
On a cycling tour of Taiwan, we passed by the towns of Dawu and Taimali in Taitung County and saw some artwork by the local aborigine people. Below are some of the artwork that we saw, which were street art wall murals painted along the roads of the towns.
These photos here gives a representation of what I saw; nothing beats going there to see them for yourselves.
Enjoy! 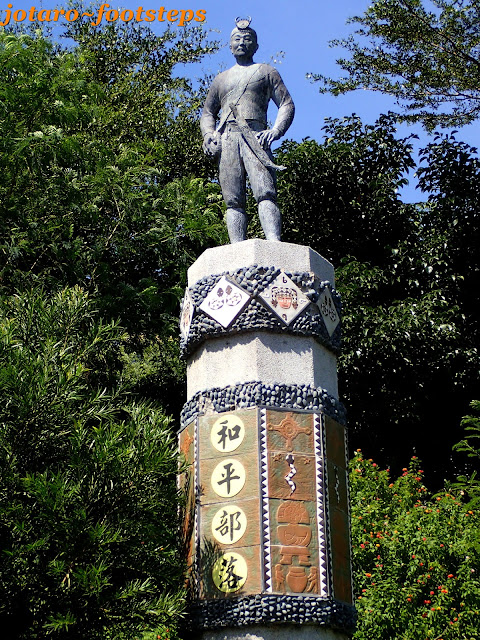 Just out of Dawu Station, a statue of an aborigine leader stands tall on a pedestal.
Could he have been a past leader of the Puyuma tribe who are from around this region? 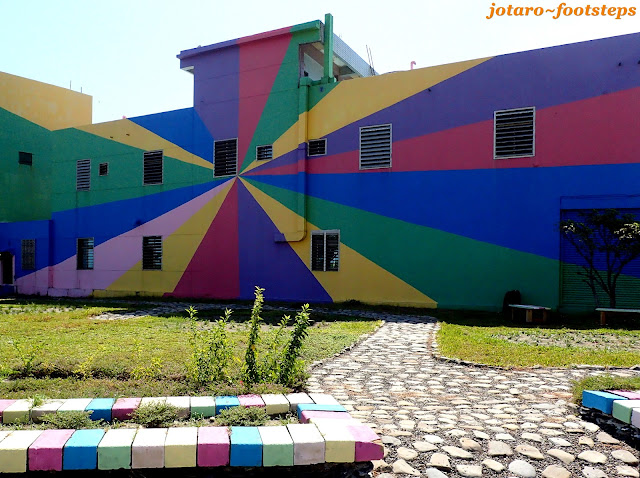 Just as we rode into town, a large colorful wall mural greeted us. This mural signifies the entrance to Dawu Rainbow Village (大武彩虹村). 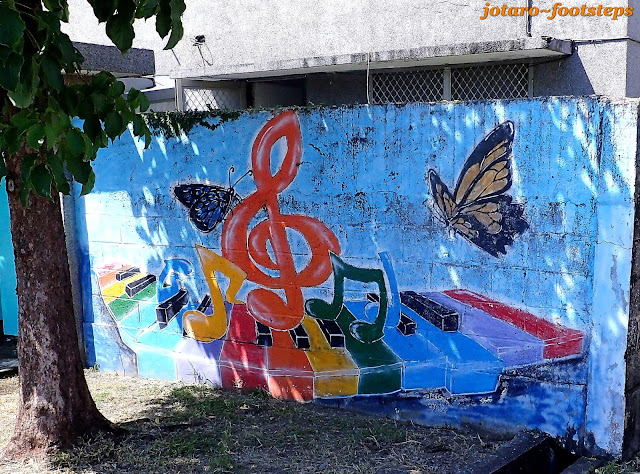 We rode around the town a bit and saw some nice art. This one is of butterflies hovering over colorful piano keys. A simple one probably painted by young children. 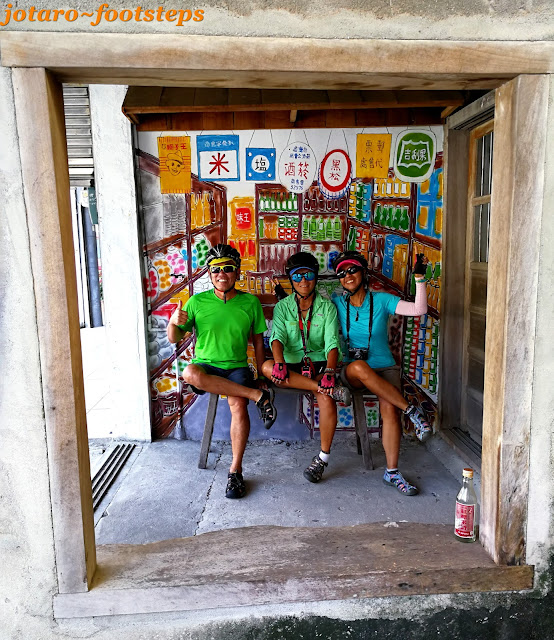 At an end wall along the corridor fronting a row of shop-houses was this painting of a grocery shop. My cycling buddies were attracted to pose in front of it. 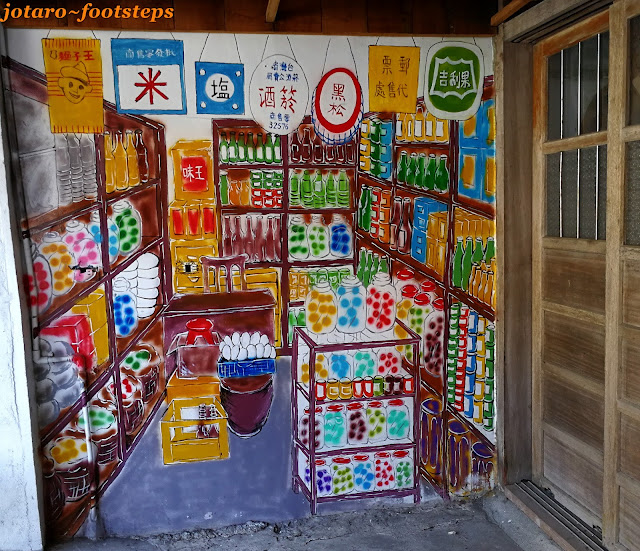 Here's an unobstructed view of the grocery shop wall mural. It may not show any aboriginal tribal scenes, but the bright range of colors follows along aboriginal art lines. 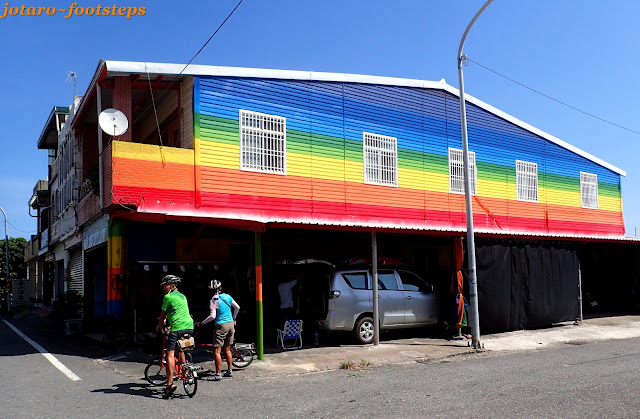 At the center of the town, another rainbow building with colorful horizontal tribes. 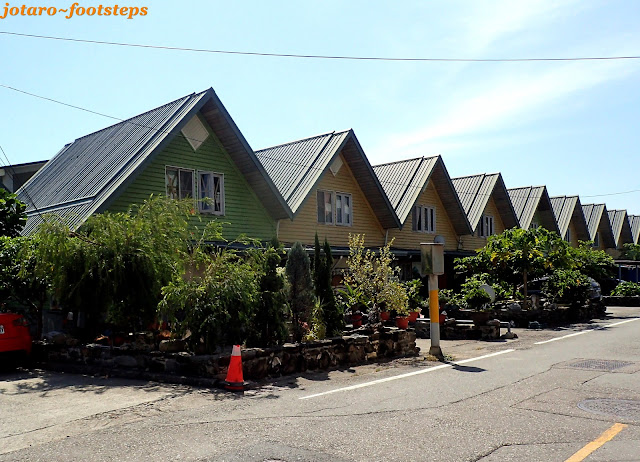 Further in were longhouses built for the Puyuma (卑南族) aborigines who had been relocated into the town. It is here on the walls of individual houses that we saw most of the aboriginal art in this Dawu. 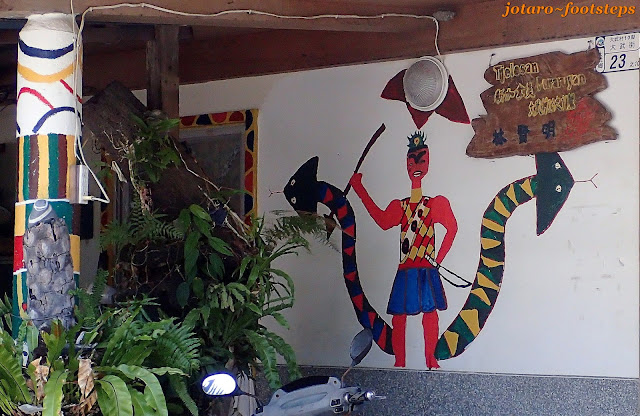 A tribal leader with two hundred-pace snakes besides him.
The tribe consider themselves to be descendants of the  snake. However, only the chief’s family and the other nobles were allowed to make use of snake designs, which can still be found on the door lintels, beams and walls of their homes, as well as on stone slabs, clothing and numerous utensils of everyday life. 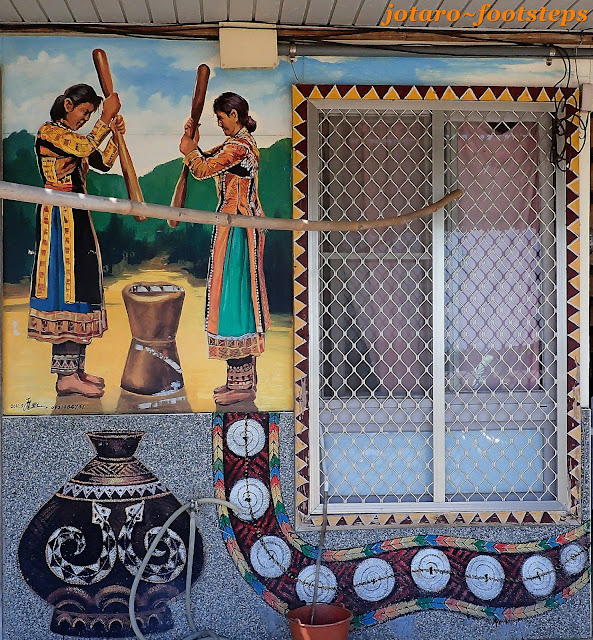 Aborigine ladies in tribal costumes pounding rice in a mortar-pestle. Below is an urn with hundred-pace snakes. Snake skin patterns also adorn the window frame. 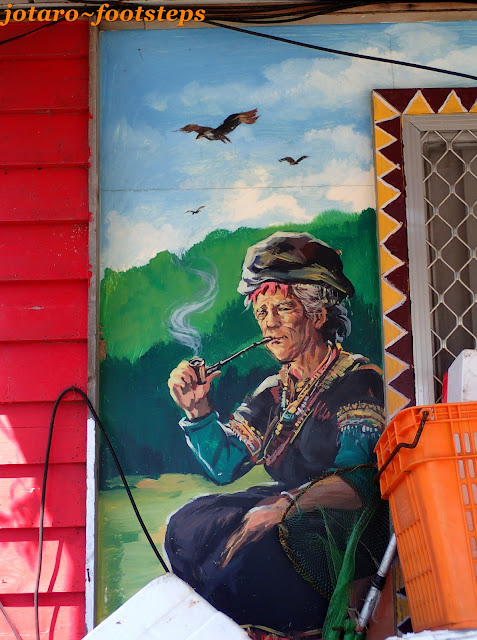 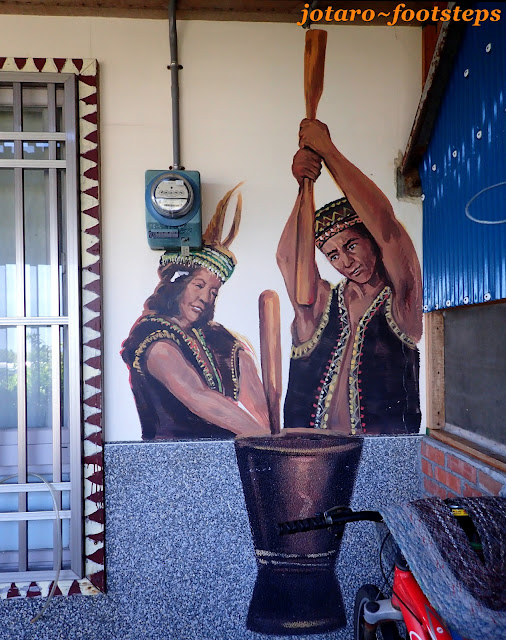 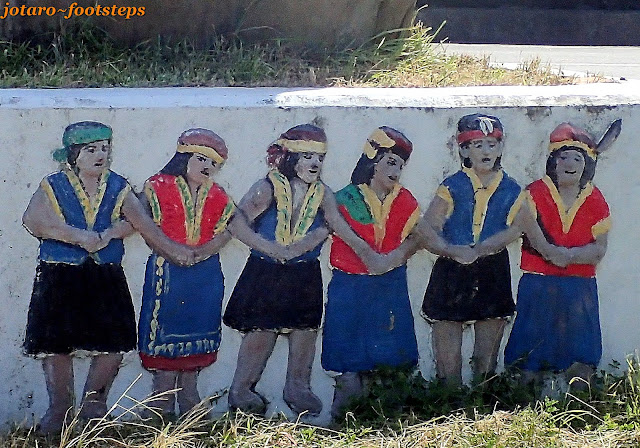 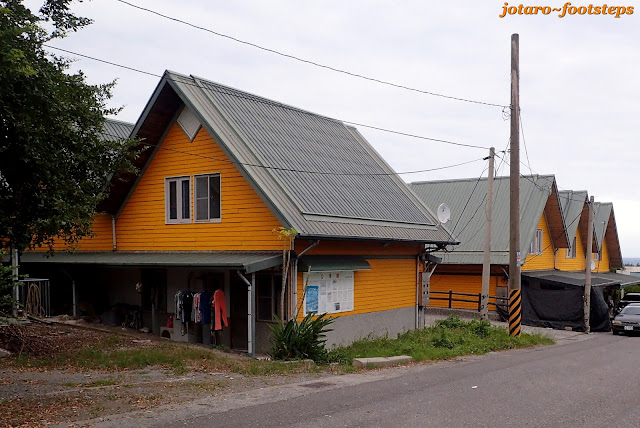 At Taimali, the Paiwan aborigine longhouses were painted yellow. Unlike Dawu, the aboriginal art are not painted onto these houses, perhaps it's a new housing and the people have yet to put their creativity onto their houses.

Tjavualji (that's the aboriginal name for Taimali) has a long history and was established 1,000 years ago by the Qian YaoKao, also called the Da Ma, who were ancestors of the Paiwan people. Qing era records show the place name written variously (兆貓裡/朝貓籬/大貓狸/大麻里), etc. According to Paiwan  legend it had been called "the village of sunrise" (Jabauli or Tjavualji in Paiwan language) because there the sun rises from the eastern sea.
In 1920, the village was officially called Tamari (太麻里), which is essentially the name used up to now. After Taiwan was handed over from Japan to the Republic of China in 1945, its name was modified to Taimali Village (太麻里村). 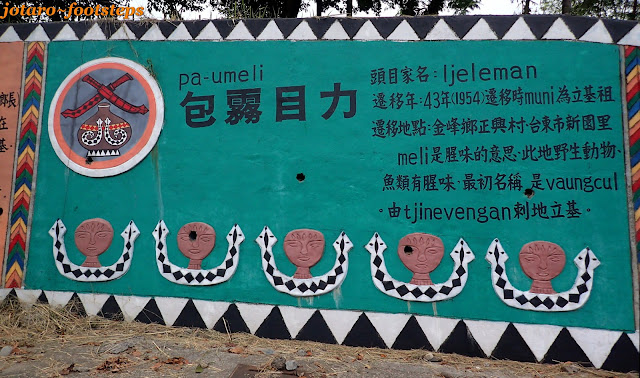 Here the aboriginal artwork are seen painted on wall murals along the various streets leading to the Taimali Railway Station. A bit of exploration around this area is needed to view these murals. Although there are some murals depicting the culture; there were others that act like a wall dictionary, showing a painting of an item with it's name both in aboriginal language and Chinese. Often there is an accompanying write up on the artwork and it's history. 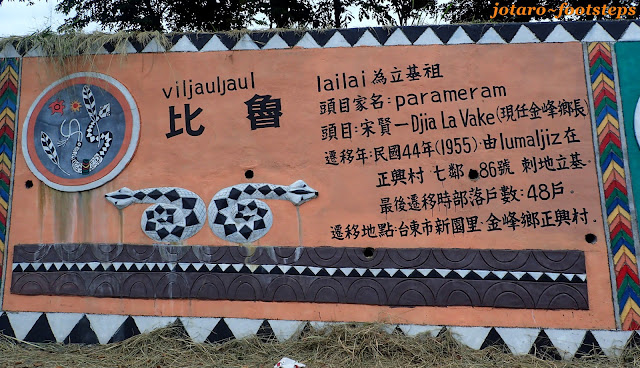 The hundred-pace snakes are portrayed in many of these murals. 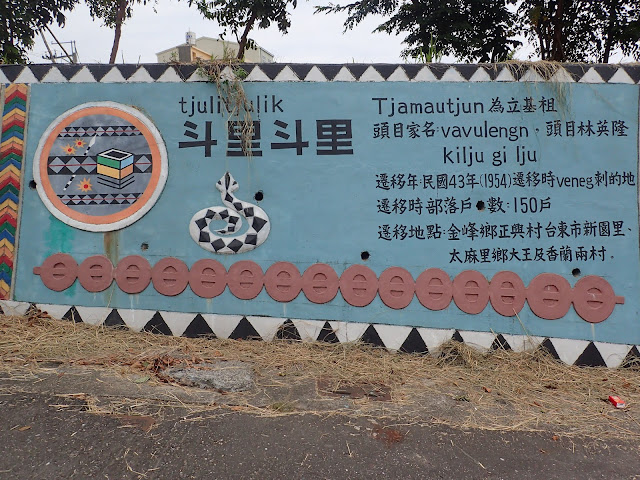 Colorful necklace beads below an pot. 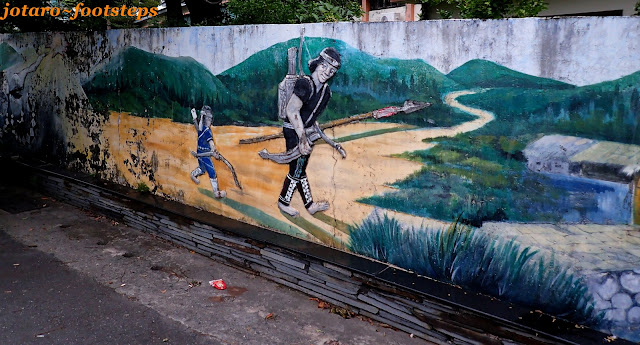 A father and son goes hunting.

Are these aborigines hunting or fighting a battle? 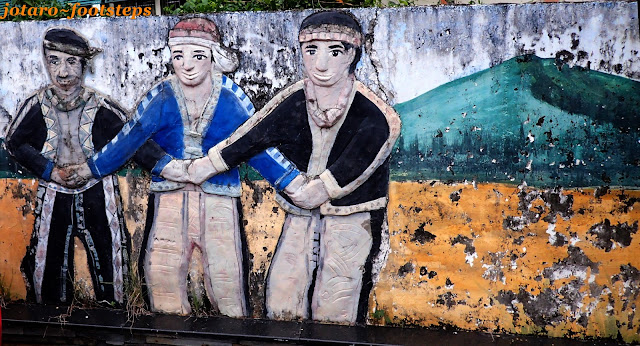 Snakes arching over a head and two others form the figure eighty-eight.