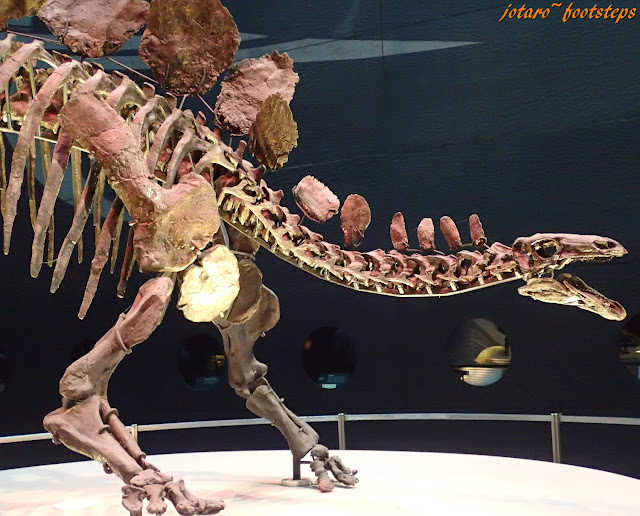 It's our 3rd day in London, the previous days we had visited some markets, the The British Museum and had enjoyed great food too!
Today we will have two extremes, meeting up with dinosaurs and attending a wickedly Broadway production - one of the past and one from a fantasy.


But before I go rambling further, here are some London Travelling Tips:
1. We stayed connected using a pocket wifi which we got from Travel Recommends.
2. Accommodations
In the city, accommodations can be expensive (especially for those from countries with poor exchange rate against the Pound Sterling). We stayed at the Travelodge King's Cross Royal Scot at about MYR360/= per night. It is quite centrally located being walking distance to the King's Cross Station which we would use frequently to travel around London. Please note that there is a charge for using the hotel wifi.
3. We travelled frequently with the Oyster Card but avoided the peak periods (Monday to Friday (except public holidays) from 06:30 to 09:30 and 16:00 to 19:00) as fares then would almost be doubled. Also we did use the HopOn/HopOff buses (HoHo bus) to get around since we had already purchased a 48-hour pass.
4. Food
London is a cosmopolitan city, with lot's of international food available. We had a heavy buffet breakfast at our hotel and light lunch of take-away sandwiches. Dinner was good English fare and a good ol' pub, The Shakespeare Pub.
5. Places of Interest for the day:
- The Natural History Museum London.
- St. Paul's Cathedral.
- The Wicked Musical Show, which was then showing at the Apollo Victoria Theatre.


To help get orientated, above is a map showing some of our destinations for the third day. At on of the spots, we learnt the distinction between the City of London and Greater London, and all the time we thought London was just London! Yes, it was a day of education as we also learned more about our earth's history at the museum.
(.... click here for a Google map showing the boundary of the City) 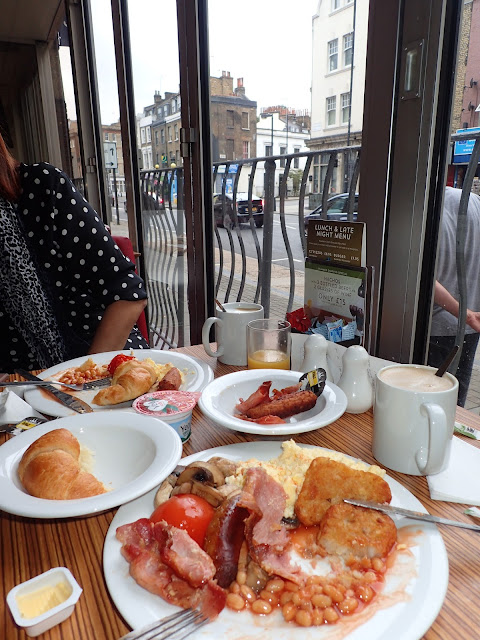 We kicked off the day with a hearty breakfast at our hotel. It's a worthwhile meal at £7-90, eat all one can; we did eat as much as we can as we would be skipping lunch to save some money. 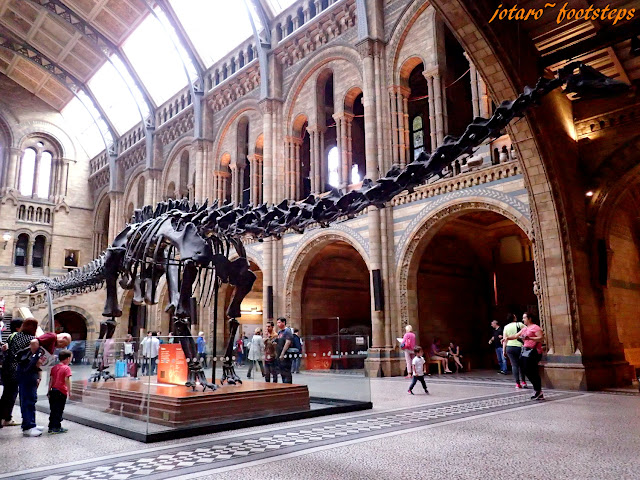 Our plans for the morning were opened, so we took a Anne's (a friend in Malaysia) suggestion and went to visit the Natural History Museum. Our 48-hour HoHo bus pass was still valid, so we popped up onto one of the buses and headed for the museum. It is a huge museum with lots of exhibits well categorised which traced the natural history of the world; we spent hours there and yet it was still not enough.
Right just after the entrance is Hintze Hall, and right there was a skeleton of the gigantic Diplodocus dinosaur, with its head and tail stretching almost half the length of the hall. This hall is the focal point of the museum, with hallways leading to other sections. 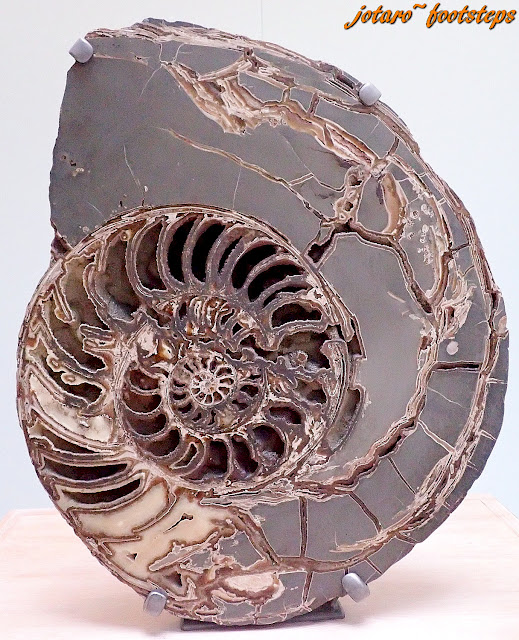 If one follow a proper sequence of viewing, exhibits traces the formation of the universe, the galaxies, the solar system and then the Earth. From there it zooms in to the start of life on our planet, with fossils of early life in the oceans, like this Ammonite which is an extinct marine mollusc. 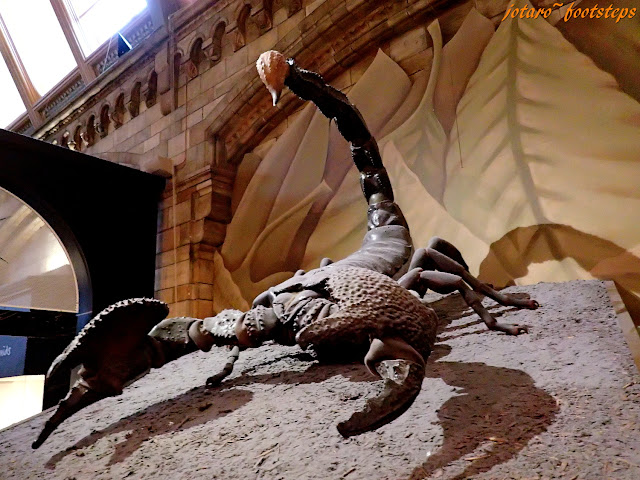 Then it was onward to the start of creepy crawlies life, with a large scorpion welcoming visitors. 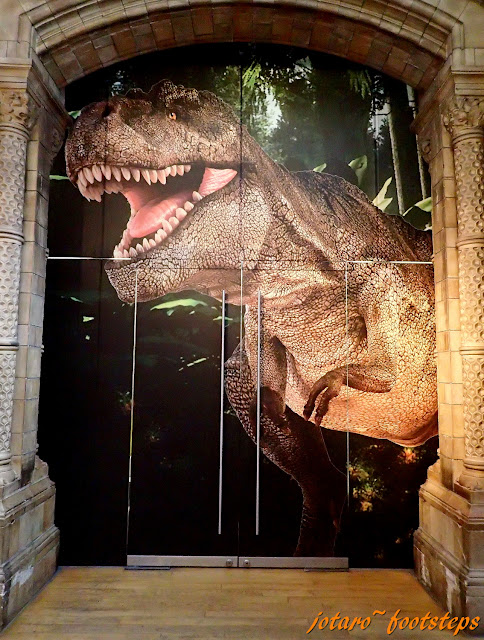 A Tyrannosaurus Rex looms outward to scarily greet visitors to the Dinosaurs section. No worries, it's just a poster but it did give Lynn a startle! OH-oh.... did I hear a roar and screams coming from inside? 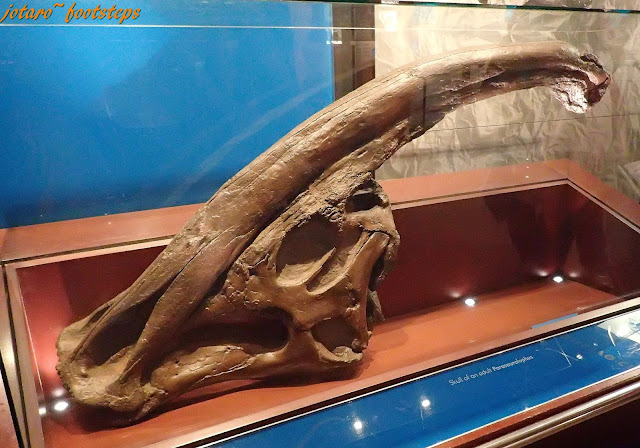 Many varied fossils of smaller sizes are on display in shelves, like this skull of a Parasaurolophus, a hard-headed dinosaur with a beautiful crest.

While larger ones stood majestically on the floor. Another view of the Diplodocus, showing how huge it is! If this is huge, then the Brontosaurus must have been even more gargantuan. 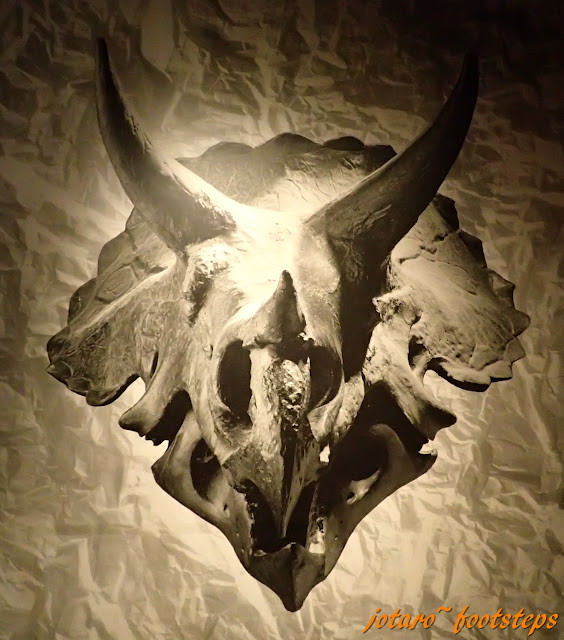 Other than fossils in the shelves, there are even holograms of the fossils - like this one of a Triceratops, its three horned skull giving it its name. 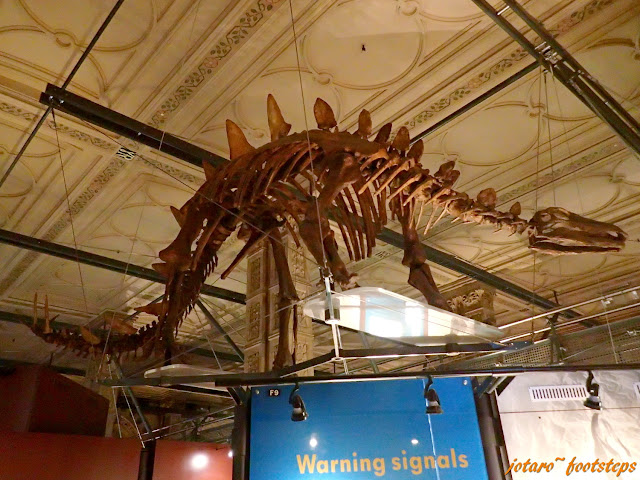 Hanging up from the ceiling, a Tuojiangosaurus - its name sounding a bit Chinese as it was found at the Toujiang (Tou River) in Sichuan, China. I had mistaken it for a Stegosaurus, it wasn't but was of the same family.... they are related.... "Hi there, cuz!"
Haha! I better brush up on my Paleontology; before one of these giants come after me. 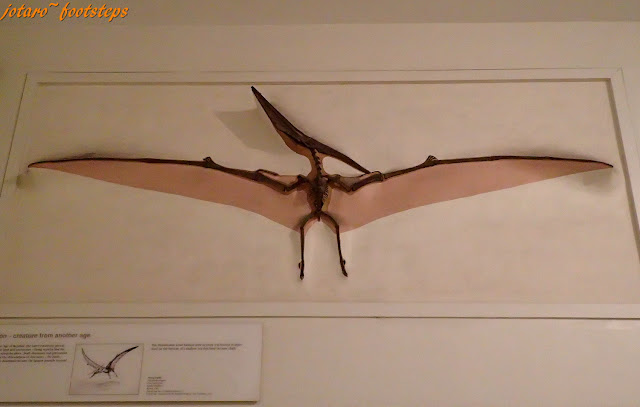 Up there too was a Pteranodon, looking down greedily on us, potential preys 😱. I mistook it for a Pterodactyl ... oops... another relative ... "Hi there, cuz!" again. 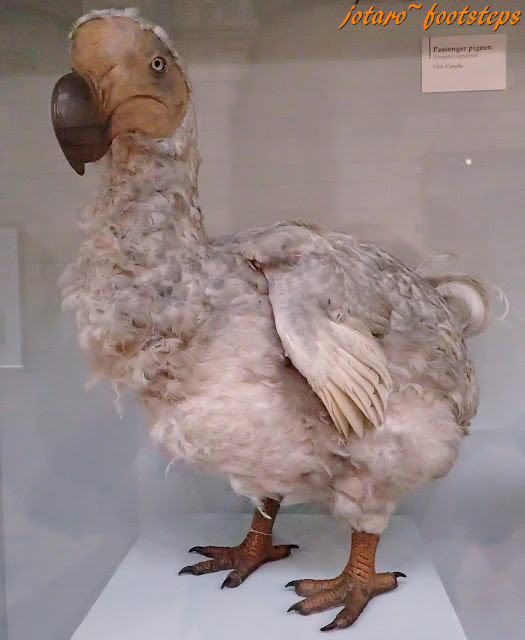 From there, dinosaurs evolved into birds, with one of the earliest being a Dodo.... no mistakes here, this is definitely a Dodo... phew!
I wonder what does the Dodos do, do they try to cross to the other side of the road. Okay, enough of the do on dodoing play of words. 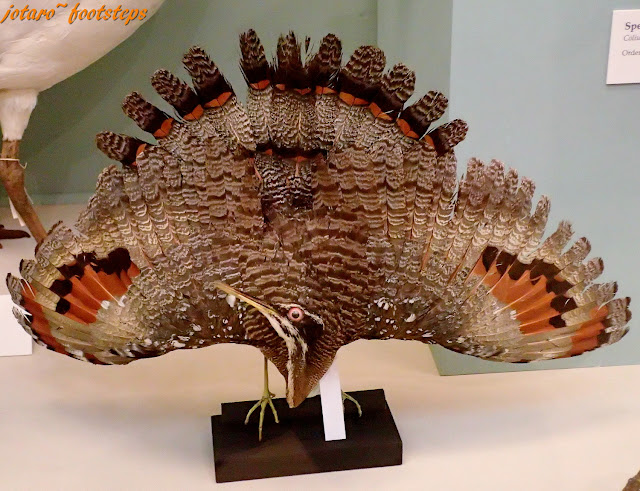 And onward to more recognisable birds, like this beautiful Sunbittern. It's a male unabashedly showing off it's striking plume; well.... men will be men! 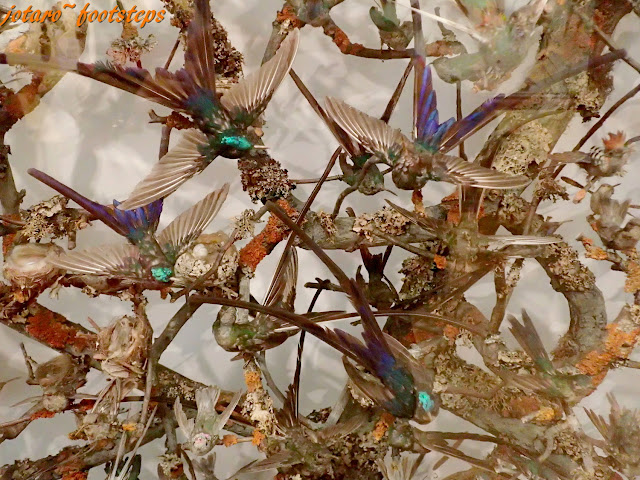 An array of smaller colourful birds. 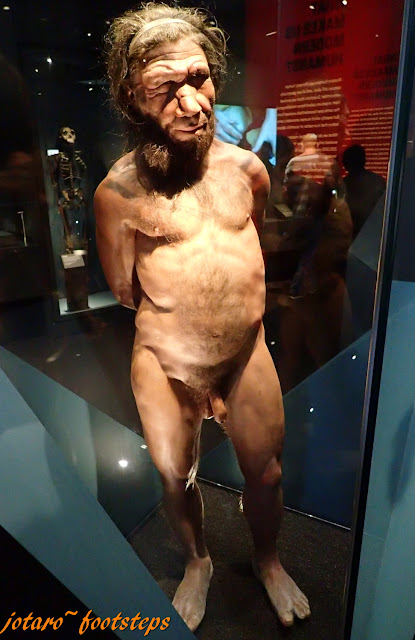 And finally, man himself. This is a Neanderthal Man, standing very cool. Let him wear Bermuda pants and a colourful Hawaiian shirt, and he will definitely look a cool hippie fitting right into our society!
These few photos of mine just give a glimpse of the museum, for a more comprehensive virtual tour of the museum, Click Here. 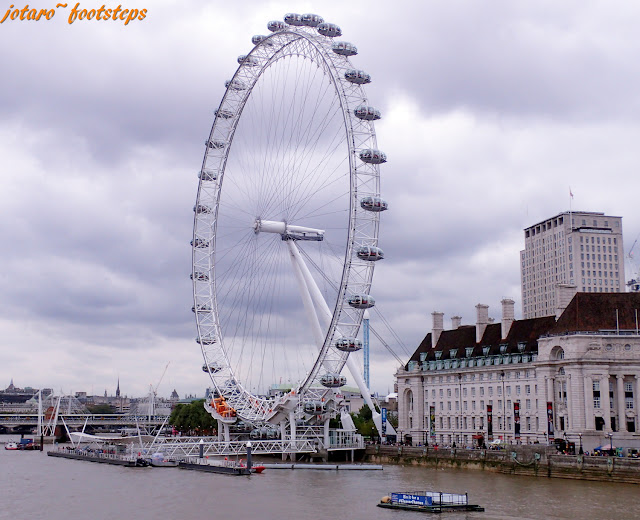 We left the museum and hopped onto another Ho-Ho bus for another quick tour of the city as we head for our next destination ... the 48-hour pass really saved us a lot in travelling cost. Caught another view of the London Eye .... 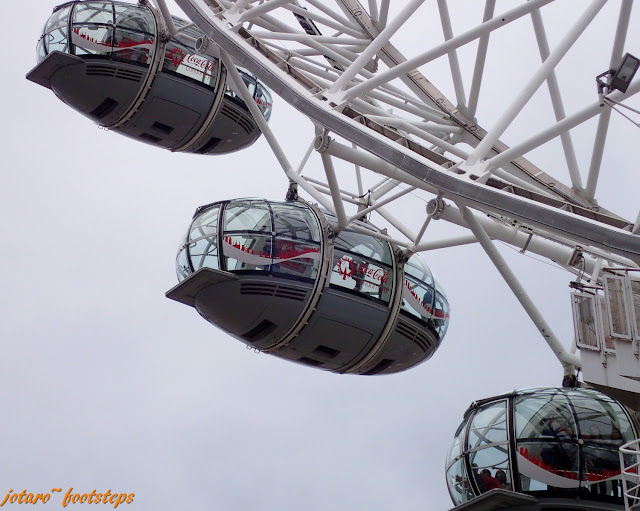 ... and zoomed in onto one of the glass capsules. 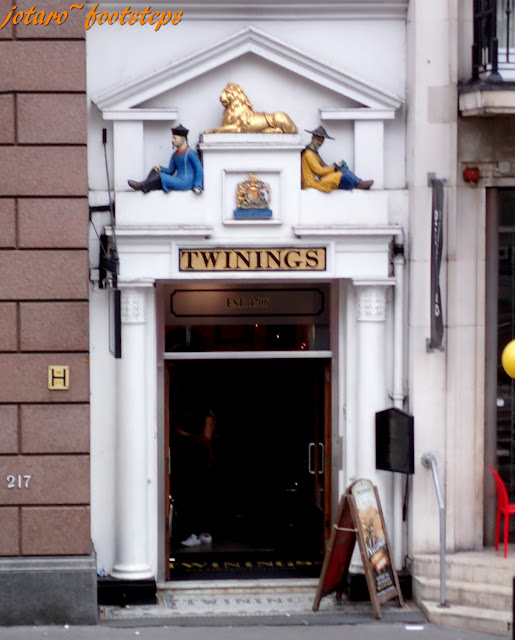 We zoomed by several interesting places, the opened-roof bus was really suitable for taking quick photos. This one is of Twinings, a local favourite tea shop. 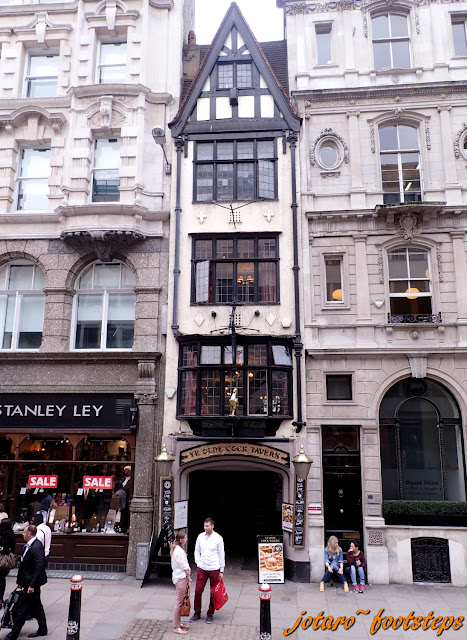 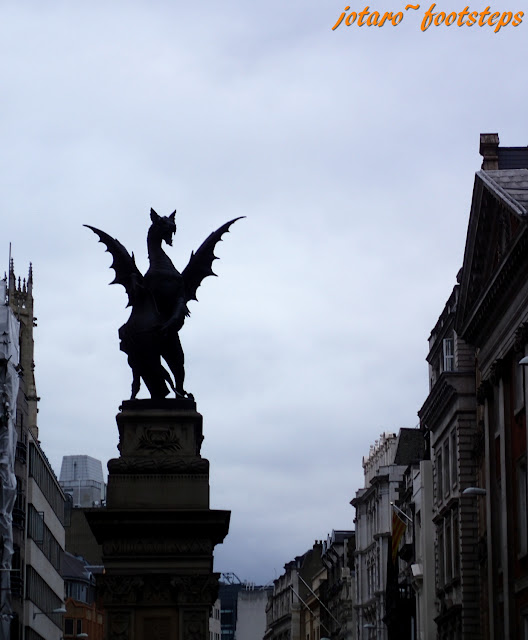 Caught this glimpse of a dragon silhouetted against the sky. This is one of several dragons that mark the boundary of the City of London; Click here for a map showing other London boundary dragons. 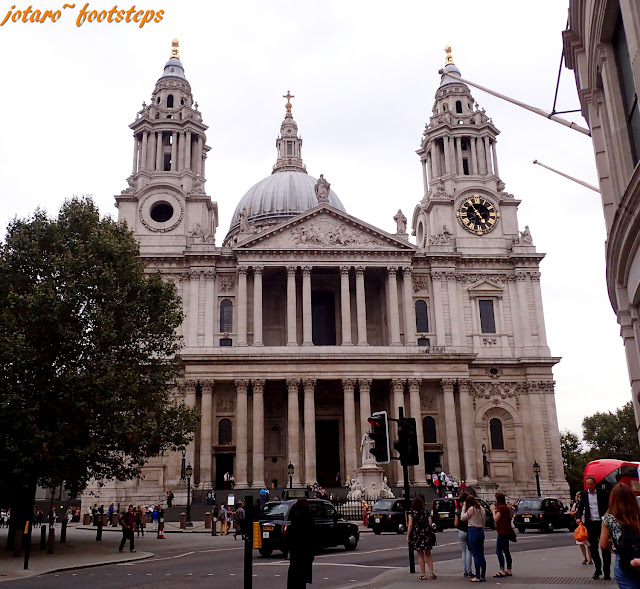 It's hoppity-hop onto the Ho-Ho bus and away we went to the St. Paul's Cathedral. It was not easy getting a good photo of this building, the place was just so busy - full of traffic and full of people who were to busy to avoid standing in front of my camera. This shot I got looked so different from the post card photo, one can hardly see the iconic dome. 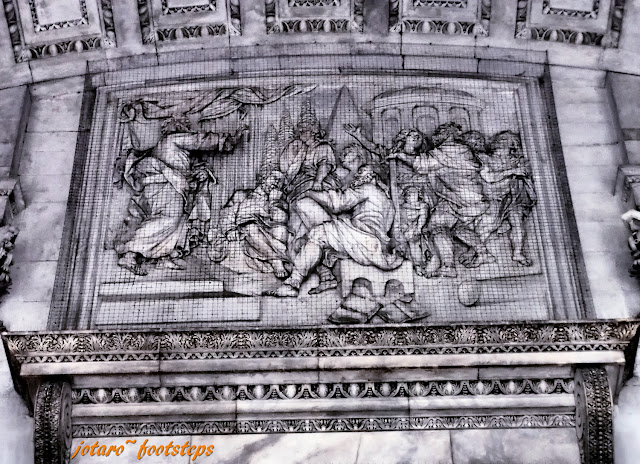 Other than people and traffic, there must have been many pigeons around too. Wall frescos were suitably protected with netting from being poop bombed. 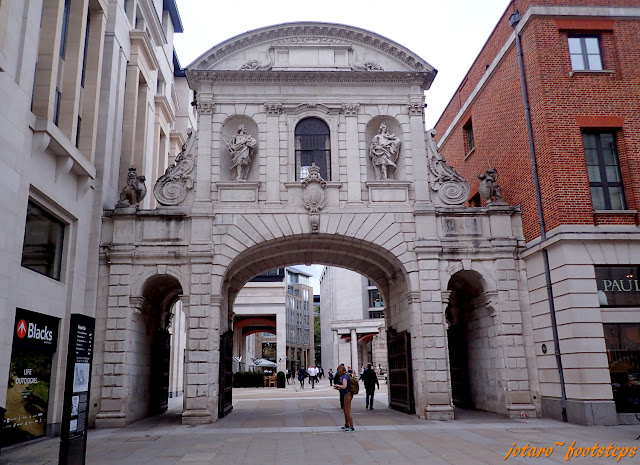 Of more significance was this arch to one side of the cathedral, the Temple Bar Gateway, it is the boundary point between the City of London and Greater London. Temple Bar is in the city which occupies an area of only approximately one square mile. St. Paul's Cathedral is just within Greater London. 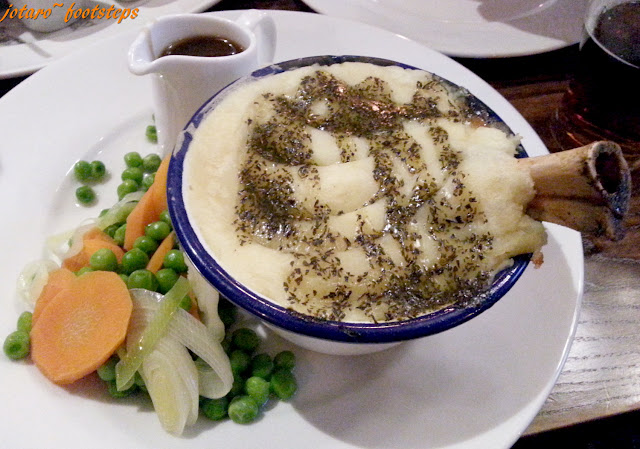 Heigh Ho! ..... it's up the hoppity bus a again, this time to head to Victoria for a theatre show. But first a stop at The Shakespeare for dinner of pub grub. I had this lamb-shank... er... it's there somewhere below the blanket of mashed potato. 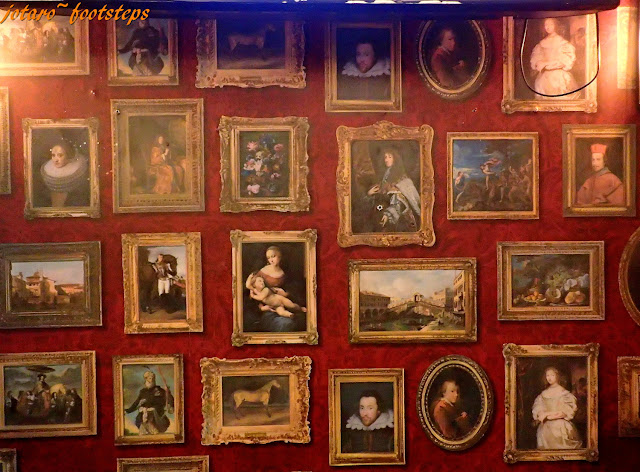 The Shakespeare oddly is not named after the Bard ('ol Will), but after his father John Shakespeare. So one won't see extracts or photos from his plays; but hanging on the walls were these interesting small portrait paintings of people from the past. But no worries we will get to meet the Bard the next day. 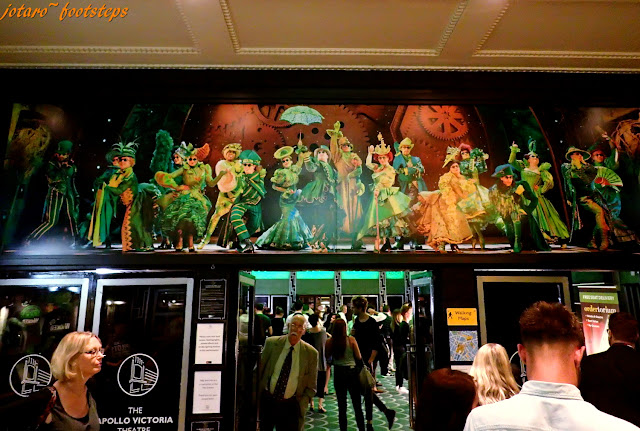 A short walk away is the Apollo Victoria Theatre; here we will be watching the Broadway production Wicked! Right at the entrance is this large poster of the cast in their costumes, looking very green like elves, promising something colourful to come. 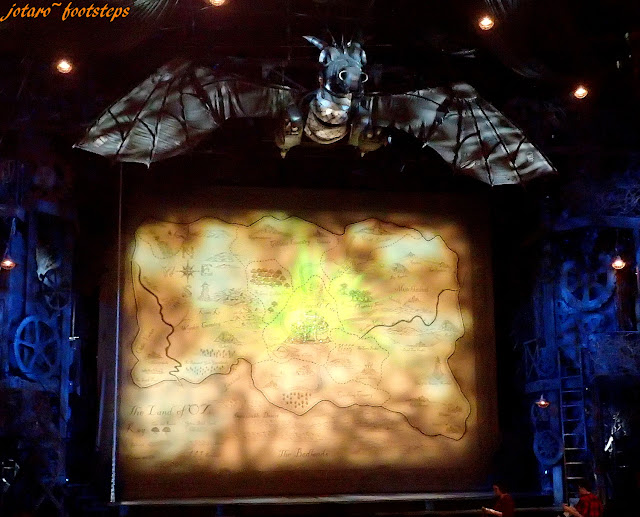 Inside the stage was lit up with a map of Oz. See, Wicked is a musical based on the Wizard of Oz but tells the story of the witches instead.... okay no spoilers here so I ain't gonna say more.
Above the stage was a model of a giant bat.... Hey! It's a dragon! 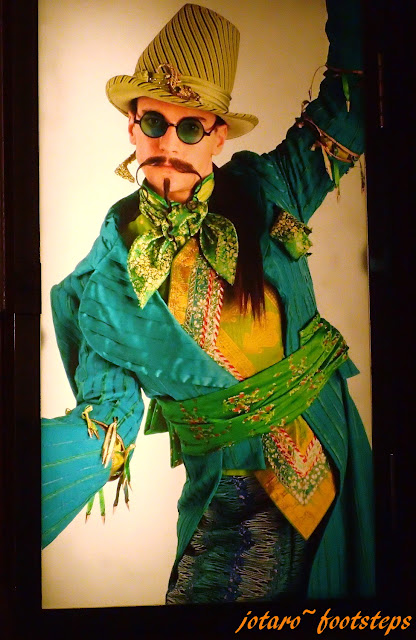 No photography is allowed in during the musical play; so here I post some photos of posters showing how colourful the costumes are to help you imagine how colourful and good the production was. 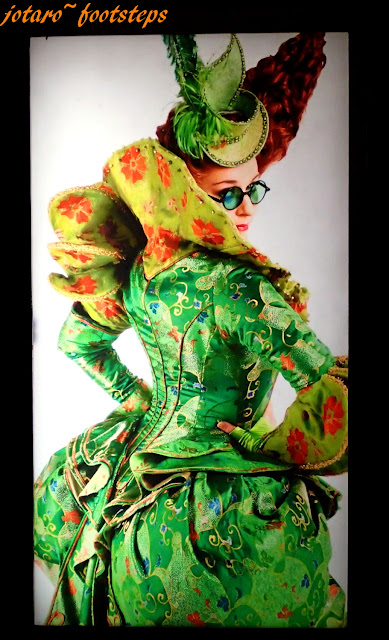 GOOD NIGHT!ABRACADABRA!
(For more photos of the day Click Here)