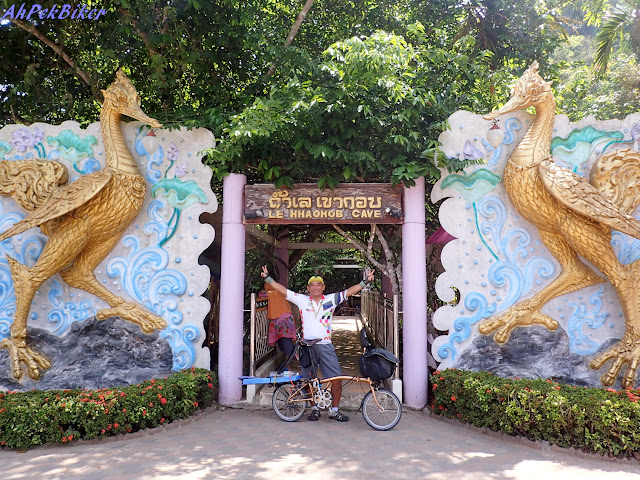 Near Trang, South Thailand - April 2016
The Le Khao Kop Cave is an interesting place to visit while in Thailand; but it is a scary place to enter, one that is even scarier than a haunted house. Some call it the Le Khaokob Cave or Le Khaokop Cave, in Thai it's called Tham Khaokob; whichever way it's called, one will have to steel one's nerve and focus one's mind before entering. 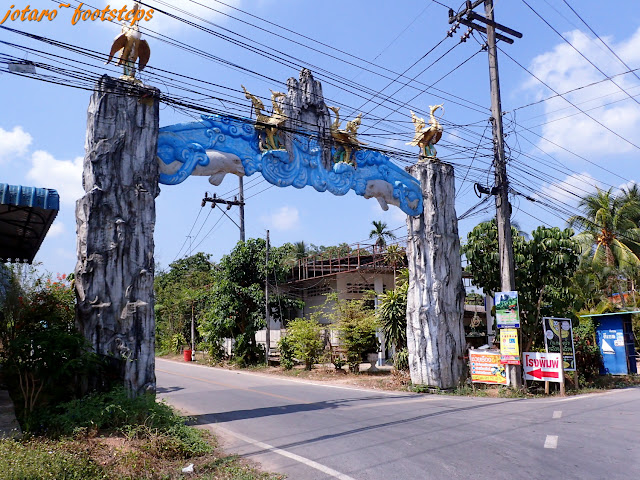 The cave lies about 33km north of Trang along Thailand's Highway Route 4. A rocky sculpted arch marks the entrance road. Take this road for another one kilometre and one will reach the ticketing office. 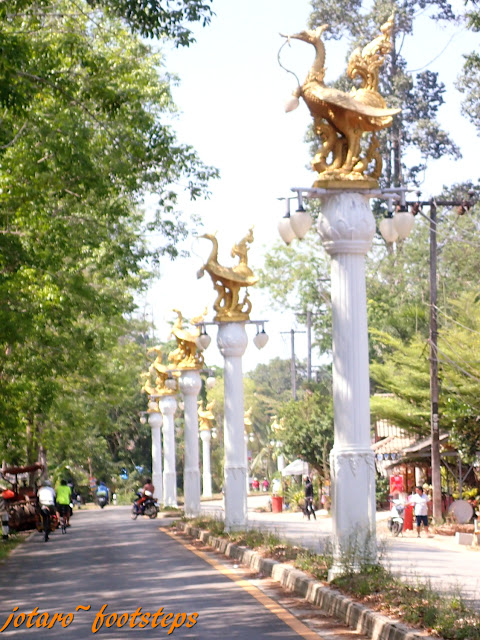 The road in is fairly shady with lighting post having intricately carved Garuda birds on top. 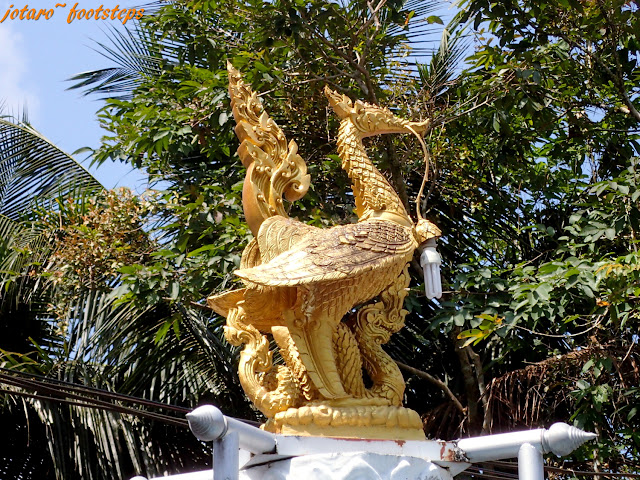 A close look at the Garuda carving shows a small dragon/snake below it.
Ok... ok... I am stalling. Even now writing this blog my memory of the cave make me hesitate about penning my experience down. Right! Steel our hearts and let's proceed. 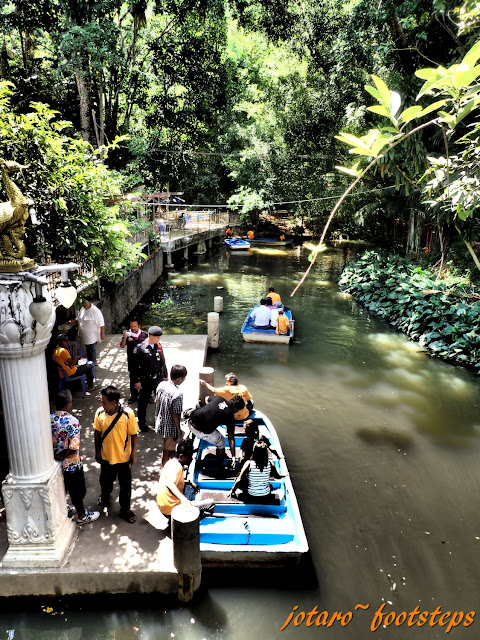 This cave exploration was by small fibre glass boats which were launched from a small pier and sails down a narrow stream. Each boat has two boatmen to guide the boat; this was most important as we were to find out later. 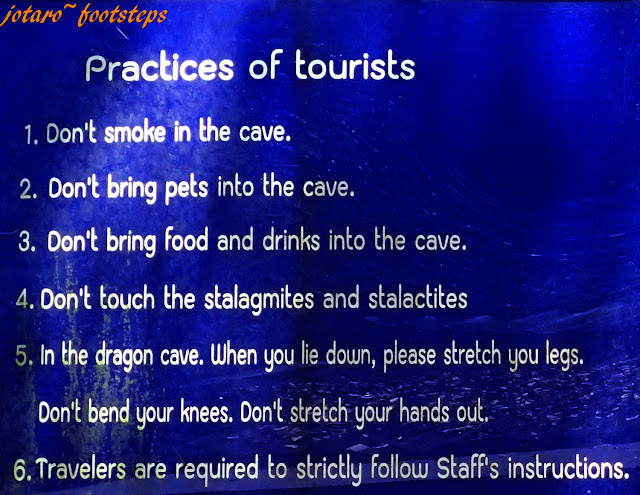 Right at the entrance to the pier is this guideline (politely put the Thai way as "Practices of tourists"). Rule #5 is the most important one to bear in mind and follow closely - lie down, keep yourself stretch out as flat as possible and no bending of knees AND keep your hands within the boat! 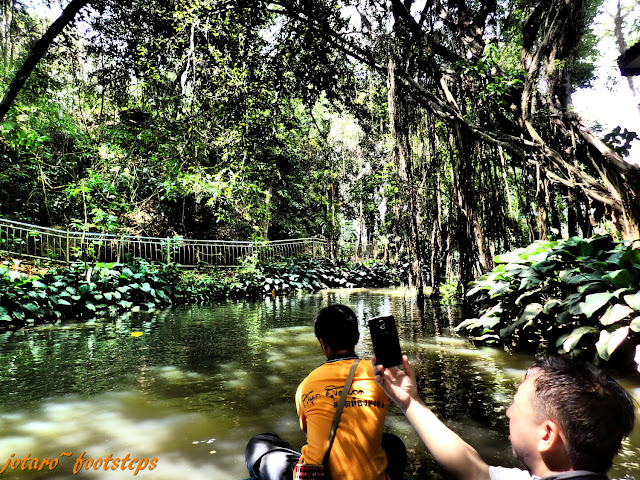 The ride started off rather innocently, slowly following the flow of the stream as it flowed by a secondary tropical jungle with green trees on both sides. The boatmen pedalled us onwards, there was no motor. 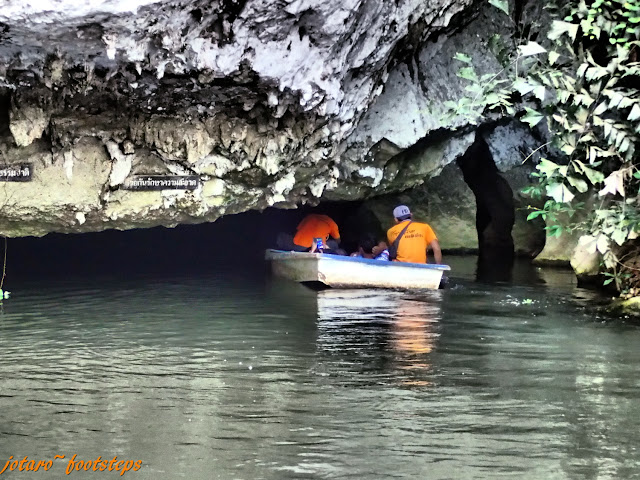 The green landscape relaxed us.... until we saw the entrance into the cave. Damn! The ceiling is less than a metre high only! The boatmen instructed us to lie down flat on the boat... seeing how low the the cave's ceiling was, we just quietly obeyed.... our hearts began thumping. 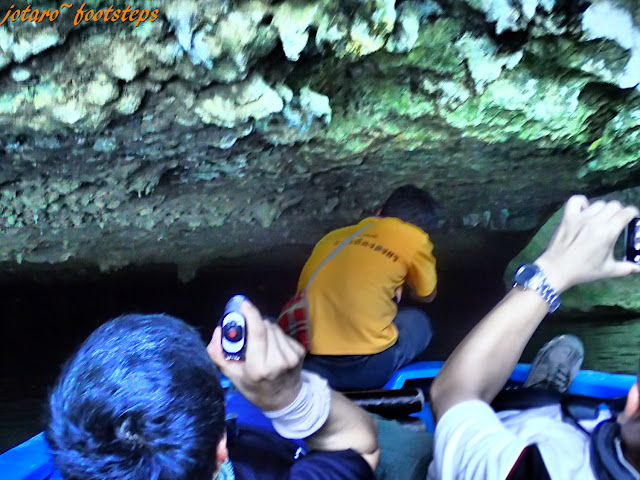 Eventhough lying down flat, we bravely tried to take photos. As we went further in, the ceiling reached lower down; now just about a foot above our faces! 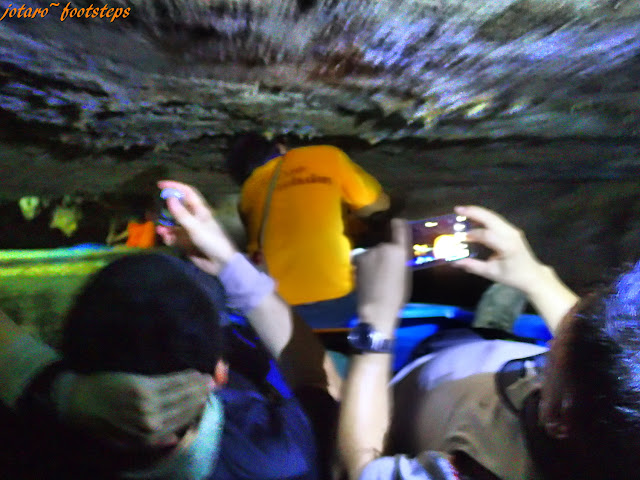 Further in, it got even lower and the boatmen (dressed in orange T-shirts) now had to crouch lower as they rowed along, bending their heads to avoid hitting the ceiling. 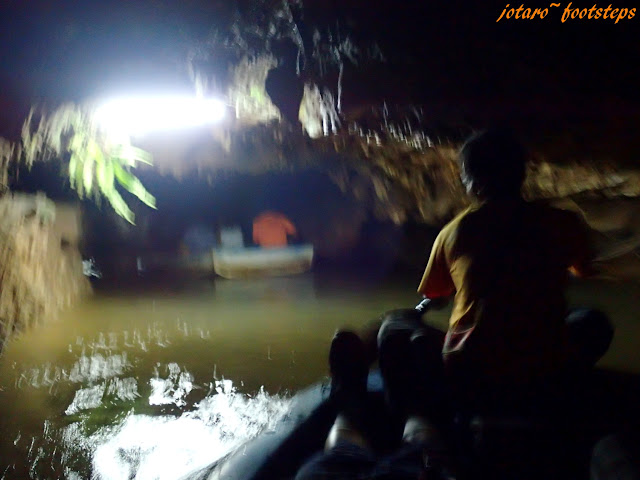 This went on for about twenty minutes and we came to a section where the ceiling was higher, high enough for us to sit down again. 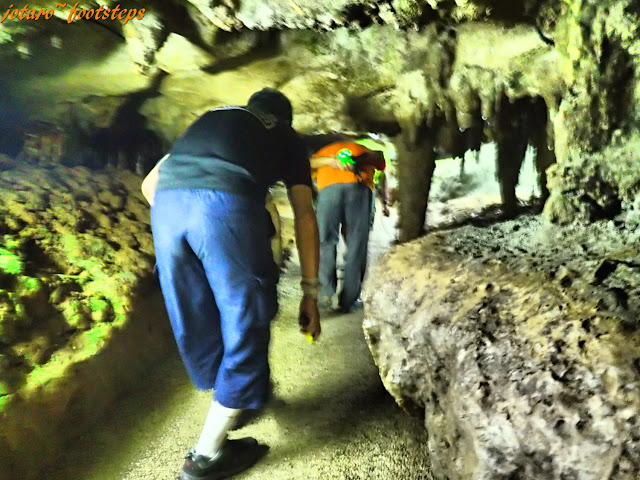 This is the Belly of the Beast, the belly of the Dragon. The stream which we rode on flow down from the Banthat Mountain and meet Khao Kop (Kop Hill) and flows into it. The cave route with it's short stalactite ceiling resembles the spine of the dragon. Here where it is higher is the dragon's belly.
We disembarked and take a walk in. The entrance is low, requiring us to walk slightly hunched. 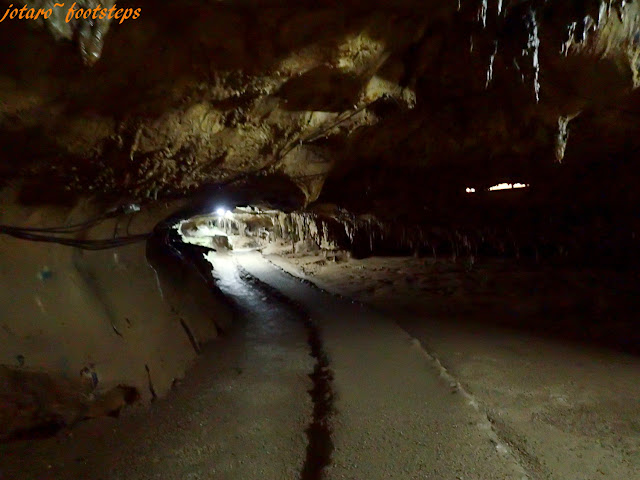 A path with streaming water on one side led us inwards. Here the ceiling was taller and we could walk upright. 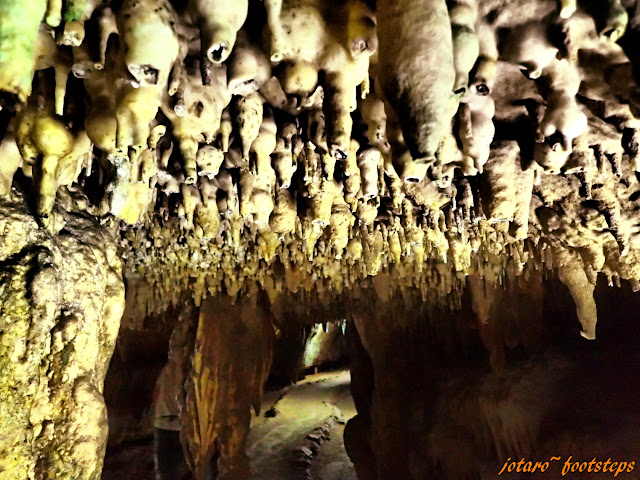 This cave has interesting stalactites, short, small ones that crowded closely together. Oddly, there were no stalagmites. 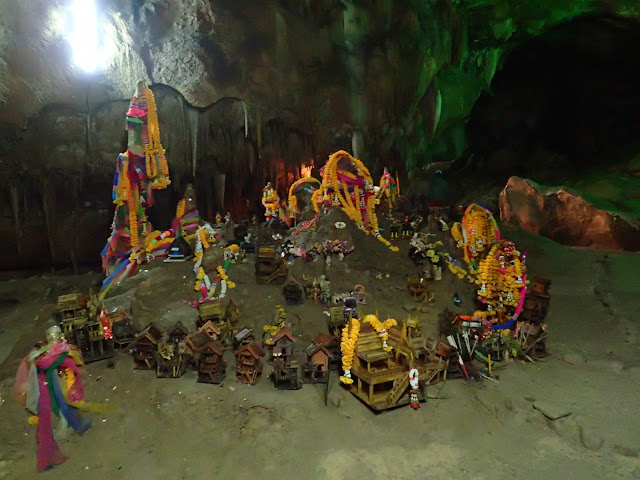 Inside there were a couple of small caverns, one with a large brightly decorated shrine at the centre... 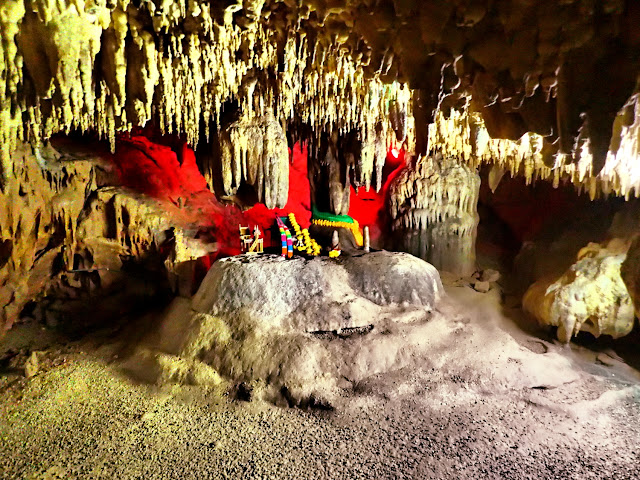 ...  and towards one side was a smaller shrine resting below stalactites. 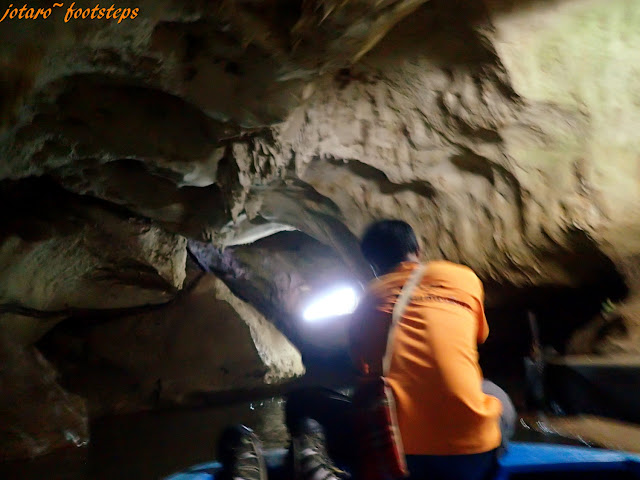 After about fifteen minutes we went back to the boat and continued our journey.
Hey! The ceiling is higher now, what a relief. 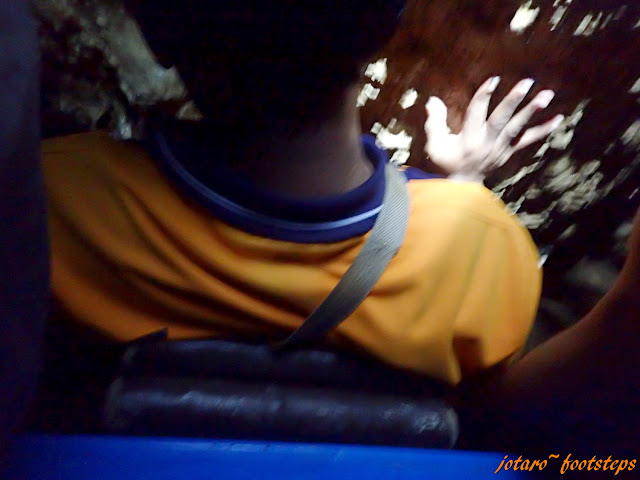 Our relief was very short-lived. Ahead the roof reached down very much lower; the boatmen now themselves had to lie down and use their hands to push us through. The rocky surface of the ceiling was just a couple of inches from our face. In fact at certain points we seem to had got stuck and it was only through the deft manoeuvring of the boatmen that we managed to get through. 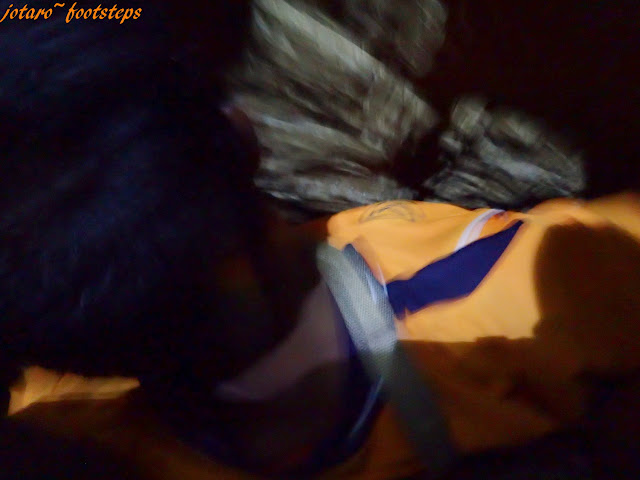 I continued to snap photos, but had to hold my camera low down, right next to my leg. Most of the photos came out blurry. The one above is of the front boatman lying down, his head is on the left (the dark patch) and his chest almost touching the rocky surface above. 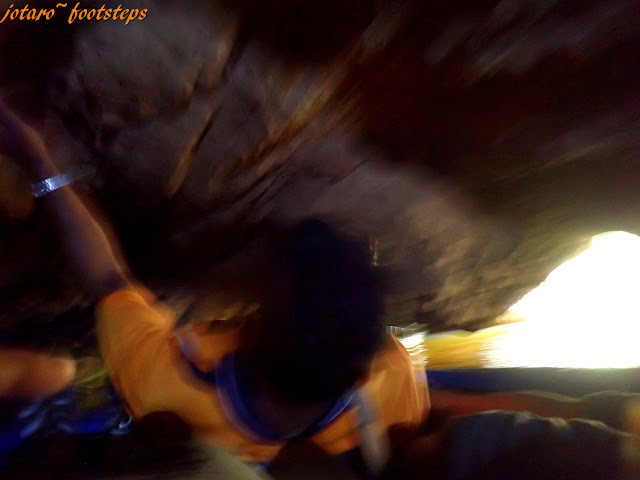 After another twenty minutes, we saw sunlight! Phew.... it's almost the end of the ride. 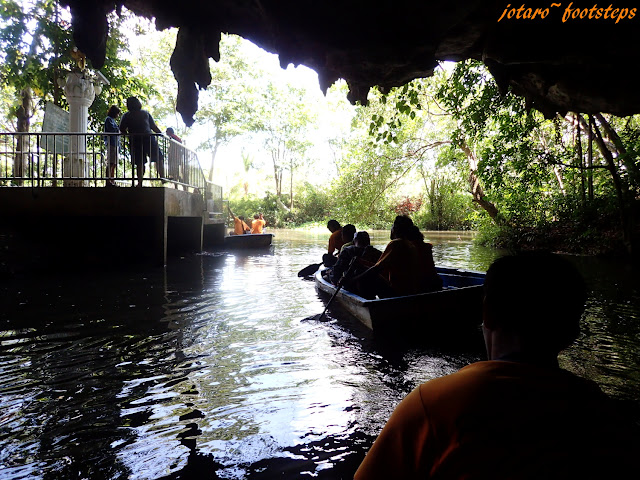 And we are out and back at the pier! I hope our faces were not green with fright, otherwise it would have scared the next batch of visitors. 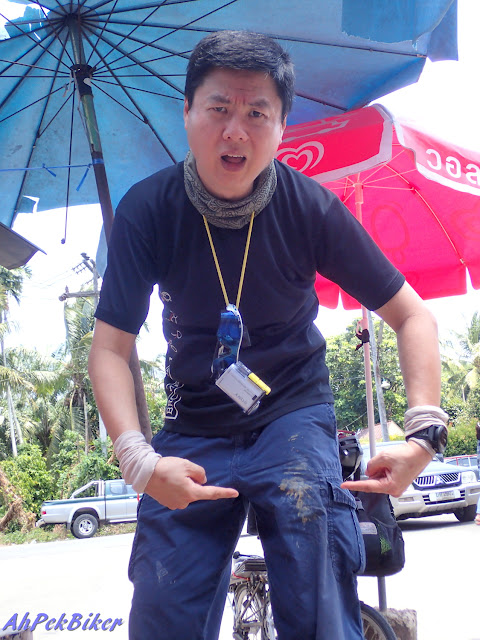 Back on land, my friend showed us his muddied pants. His leg had actually been caught against the top of the cave... scary yah?
Yes, It was a Never-Again-Once-Is-Enough experience!


The Le Khao Kop Cave near Trang is a must go place while in South Thailand. It's a scary once-is-enough boat ride exploration going through this very low cave. Most come out saying "Never again!" but still did enjoy the thrills while inside.


Above is a video made by my buddy Tailim (of the hApPy HaPpY blogs), view it to feel how the boat ride was like. This was only for the first section before the Belly of the Beast, after that it got too low for him to take any videos.
For a detailed write-up of the cave follow this link : http://blog.malaysia-asia.my/2011/05/khao-kop-cave-in-trang-thailand.html

You are at - Jotaro's Blog / Footsteps / Thailand 2016-Sites / Le Khao Kob Caves Thailand - Dare You Enter The Dragon's Belly?
If you like this, view my other blogs at Jotaro's Blog