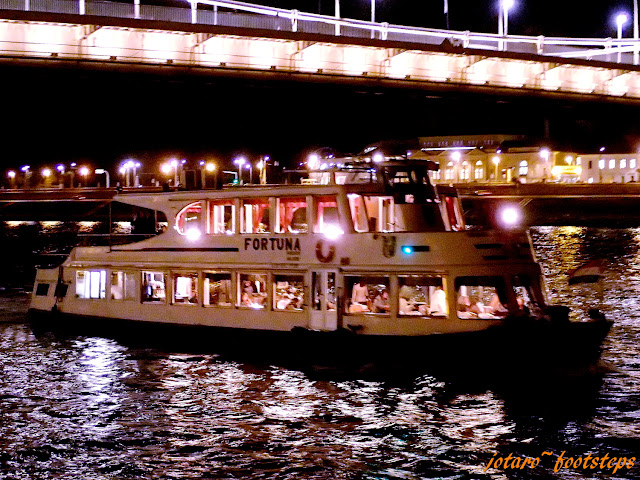 Today we leave Vienna and took a train to Budapest, crossing from Austria into Hungary.


Immediately on reaching Budapest, we took a Hop-On/Hop-Off bus tour for a quick introduction to the city. In the evening it was night river cruise along a Danube, an enchanting one that should not be missed!
The above map shows the river cruise route in red. We got the two day pass for the Hop-On/Hop-Off bus, more on the route on the next day's map. 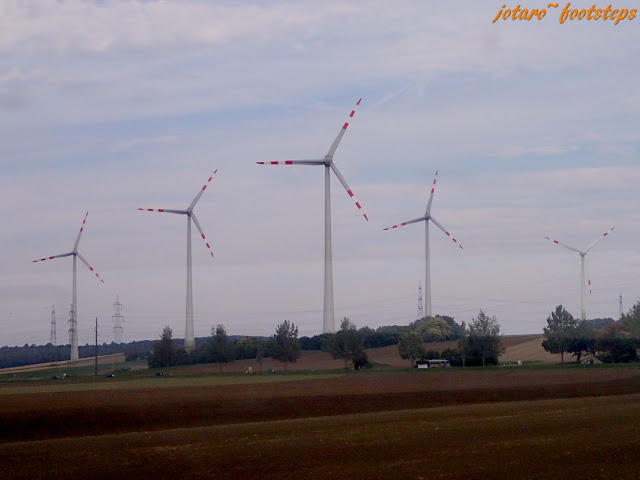 The Motel One at Westbahnhof was a very convenient place to stay in. It's just walking distance to the Westbahnhof train station which caters for the Intercity shuttle trains (which we took from Salzburg and also the one which I took to Krems),  the local U-Bahn trains (which we used for getting around Vienna) AND the international OBB trains which we would be taking to cross over to Hungary. So in the morning we just walked down from our bedrooms and PRESTO we were on board the OBB train!
The trains are clean and with in-train Wifi; and as we sped along, I watched the scenery changed from cityscape to rural scape. Out in the country, these huge windmills caught my eyes. We are now in the plains, flat areas and the windmills are modern wind-turbines generating electricity for the area's needs. There were hundreds of them!
So caught up by the scenery, I did not notice us crossing over into Hungary at Hegyeshalom. Dang! I just missed an opportune moment in my life, the moment I entered another new country!
(Note: This was the time of the refugee crisis, then often train services we cancelled. To play it safe, we had earlier also booked bus tickets for the trip from Vienna to Budapest while back home. Fortunately we did not have to use the bus and were able to get refunds while in Austria)

We took the 9:48am OBB train at Vienna and within three hours arrived at the Budapest Keleti Station. The fare was €8-00 per pax.
Budapest's Keleti Station is a nice station with old tan coloured arched walls. Upon arrival we immediately got on the Hop-On/Hop-Off bus. Well almost immediately, first we dropped into the Tourist Information office at the station to purchase the bus tickets. We got the 48-hour ticket at HUF6,000 (about USD22-00), the good thing about this is that it also includes the Danube River night cruise!
A couple of points to note here:
- There are a couple of money-changers in the station but it is better to change your money out of the station (there are many at shops just across the street) where better rates can be obtained.
- Not all EU countries have adopted the Euro, some still use their local currency. We made the mistake off changing our balance Czech Korunas to Euros in Austria, and now were changing Euros to Hungarian Forints. Should have held on and just changed the korunas to forints thus not losing out on double exchange rates. 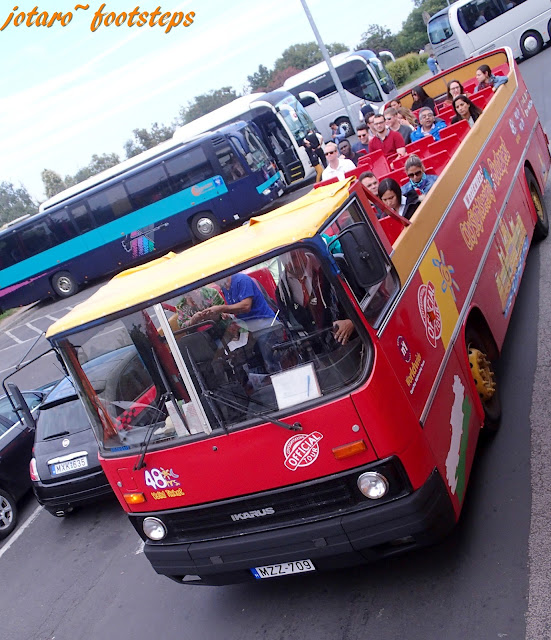 This is the Hop-On/Hop-Off bus we took from a bus stop at Rottenbiller Road just across the train station. Oops..... sorry for having you tilt your neck to see this, was trying to get the whole bus into the photo framing.
We killed two birds with one stone, took our luggage on board (it's allowed), did a quick introduction tour of Budapest and then later hopped-off near our accommodations, the King & Leda Apartments. Actually it was three birds that we killed with that stone - it was also a good way to pass our time until checking in at 3:00pm. Convenient yah? 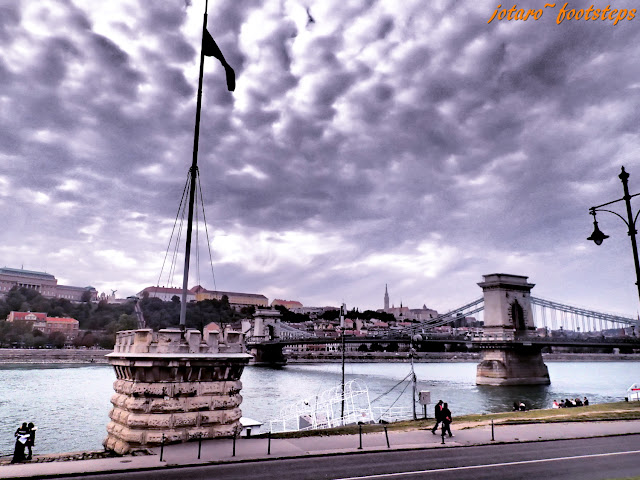 The Chain Bridge spanning over the Danube. Yes, it's the same river that I just cycled along yesterday at the Wachau Valley. It's a long river that flows pass ten countries.
The river separates the two half of Budapest - Buda on the west side and Pest on the east. Until 1873, they were previously separate towns. 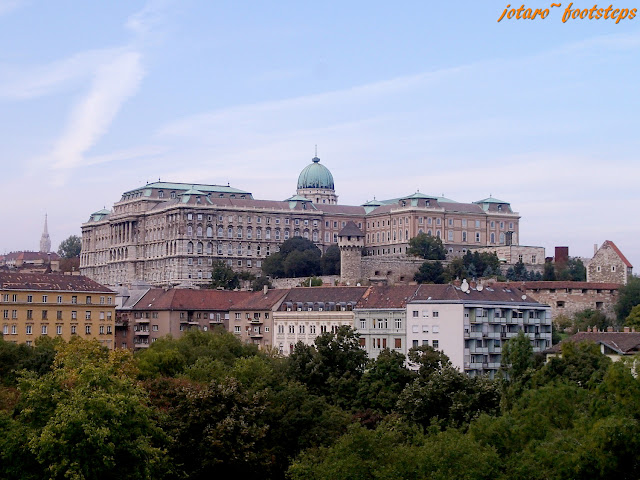 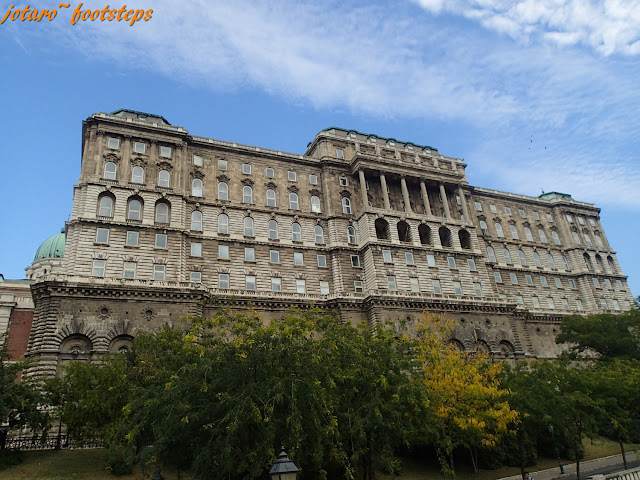 Rear view of the palace. 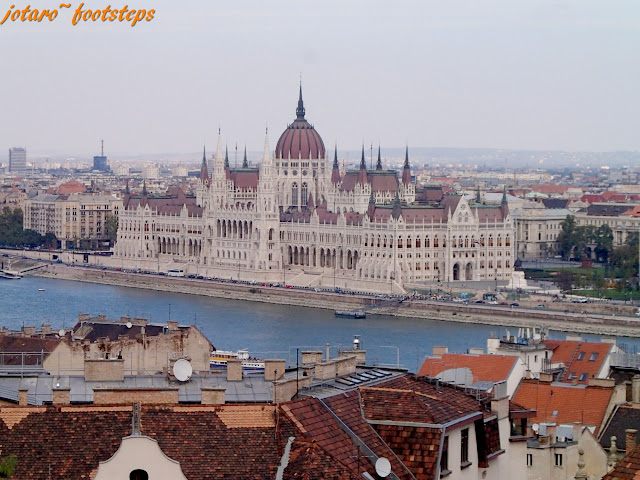 The Hungarian Parliament Building, sitting grandly on the banks of the Danube. 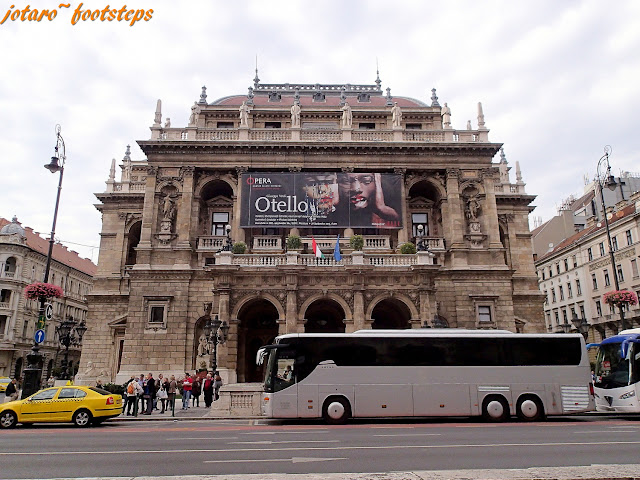 It was a good introduction to Hungarian architecture, and we looked forward to viewing these buildings at night, when they would be even better presented. 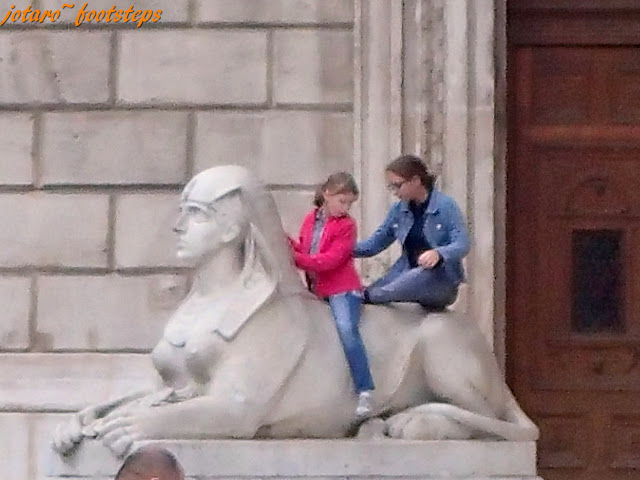 Children playing on a female sphinx, in front of the opera house. 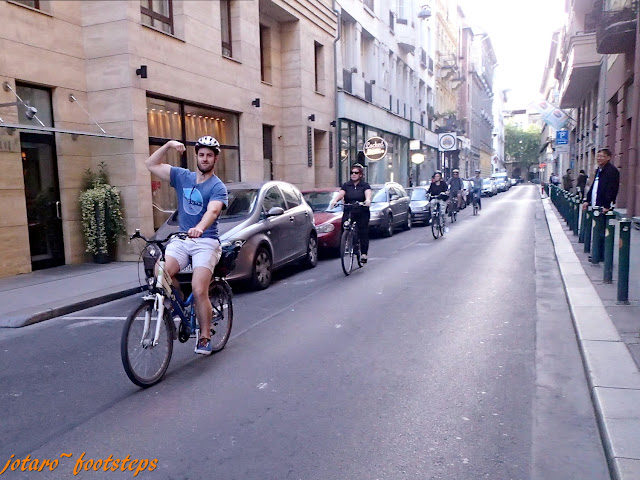 Cycling along the streets of Budapest.... I hope I will be able to do this the next few days... heh heh... 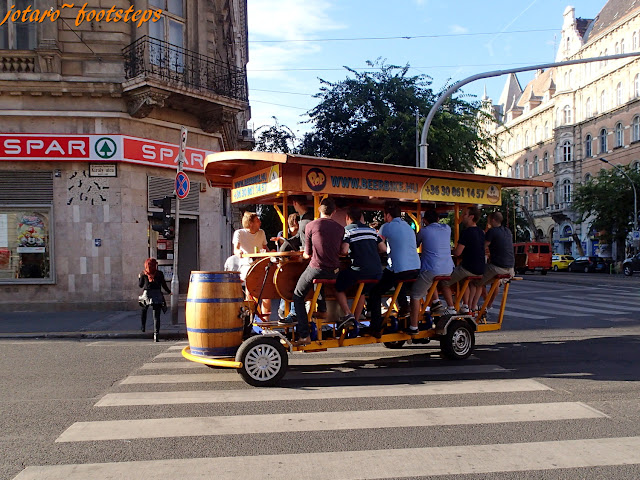 Tourist going around town on a beer bike, powering the wagon with their strong (perhaps wobbly) beery legs! 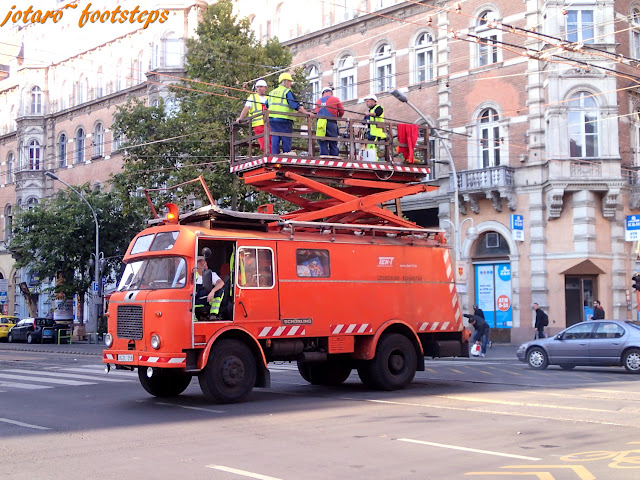 While workers were busy on top of a different wagon! 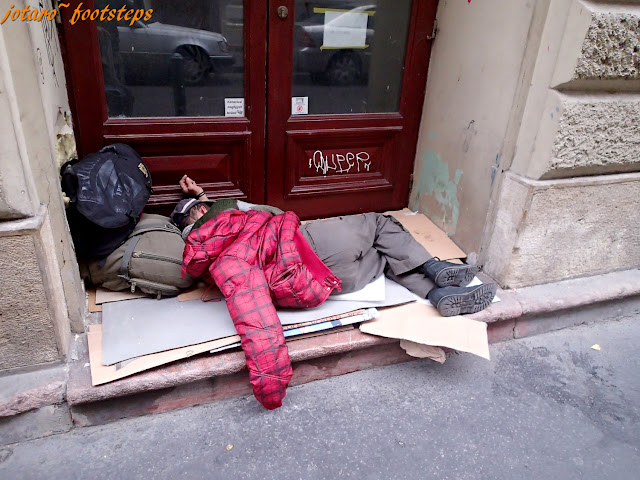 On the other end of Budapest society, a vagrant sleeping at the road side. 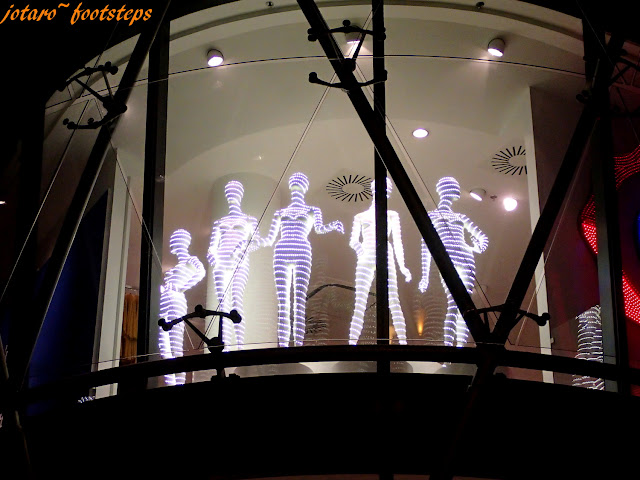 In the evening we were out again, walking the streets of Budapest to head towards the Danube. With a quick stop for a simple dinner at Buddha Original (eating at Buddha's in Buda, now that's something). We continued our walk, passing by lighted shops, their bright  neon lights a sort of preview of what we will be seeing later during our river cruise. 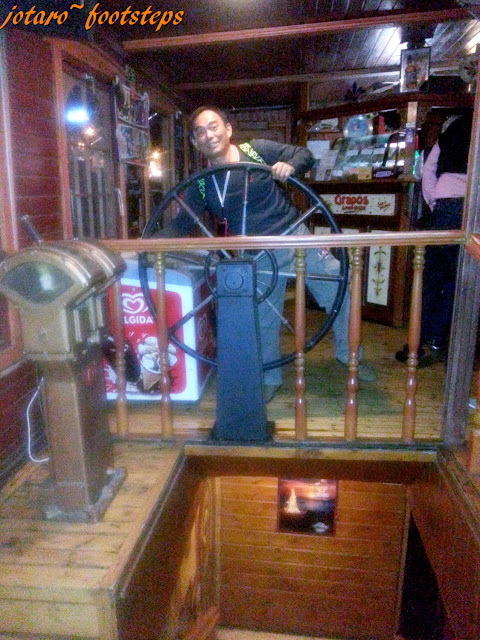 Arriving at Dock 7 at 7:30pm, we were too early. The cruise for the Hop-On/Hop-Off tour only leaves at 9:00pm. Fortunately, the waiting area is itself a large boat tied to the docks. A bar serves drinks and food..... and their were areas for some tom-foolery like this steering wheel where we all tried our hands imagining we we Captain Aheb chasing after Moby Dick... well idle minds do have crazy ideas! 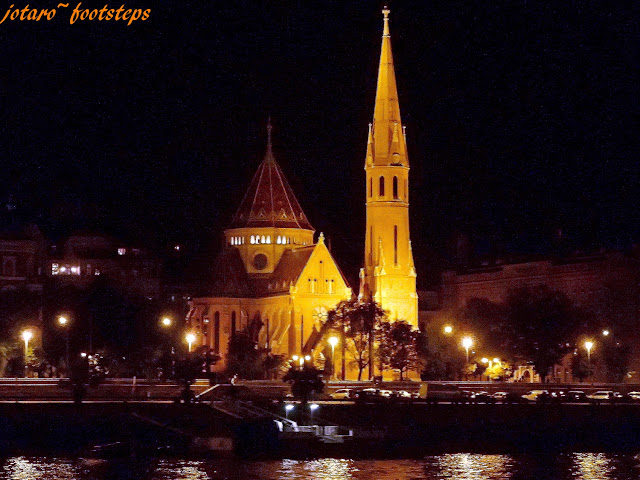 Ahoy! We set sail, and the sceneries are fantastic; starting with a teaser, this church along the river bank... 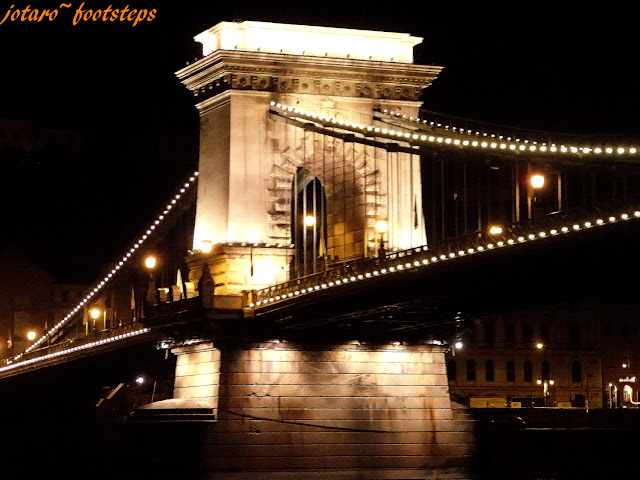 ... and warming up with a view of the Chain Bridge from below. 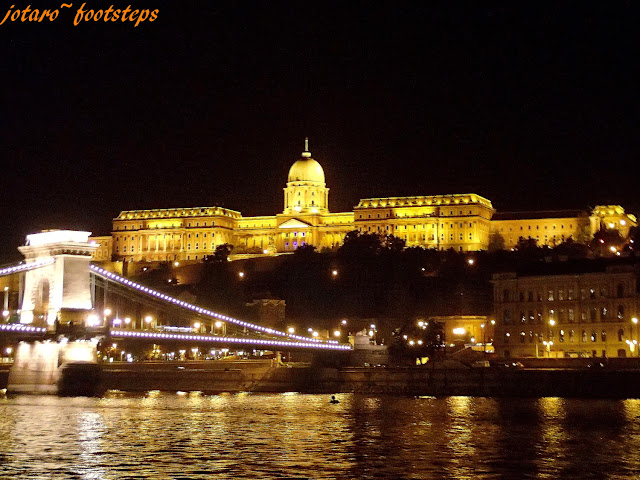 and then the palace, looking even more grand brightly lit up! 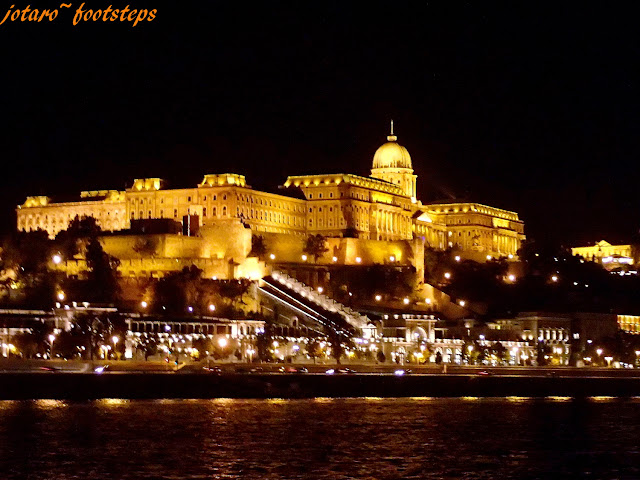 My photos here does not to justice to what we experienced - the view coupled with a cooling breeze. One have to be there to encapsulate this true feelings. 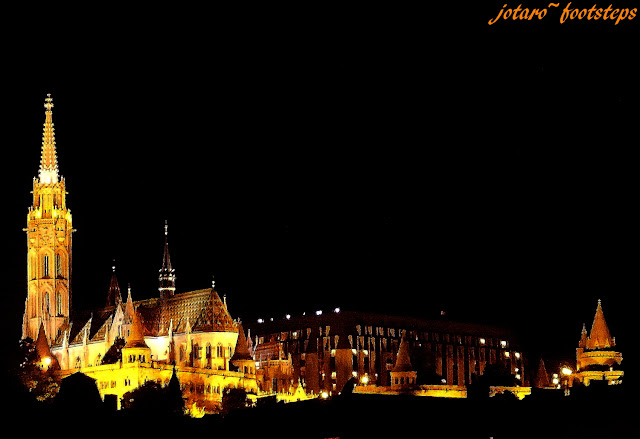 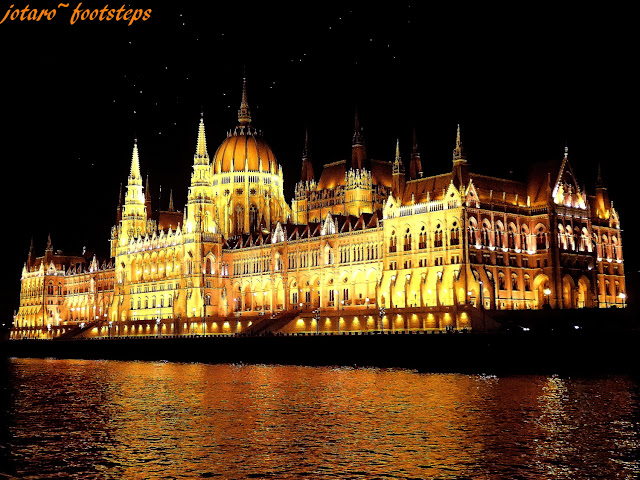 The parliament building; those bright dots above are not stars but reflections of birds flying swirling around the dome! 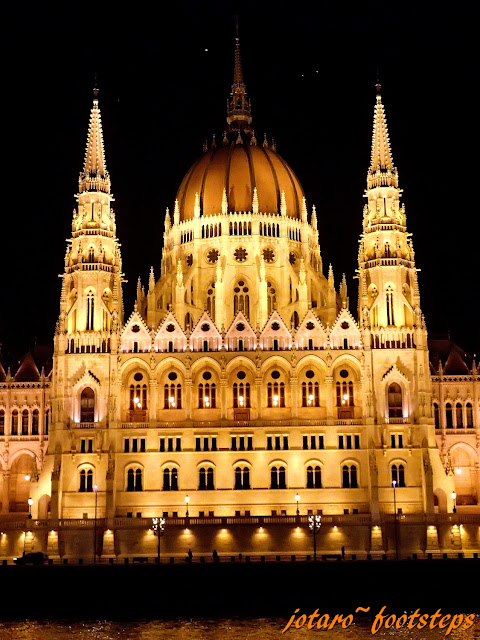 Front view of the parliament, great one isn't it? 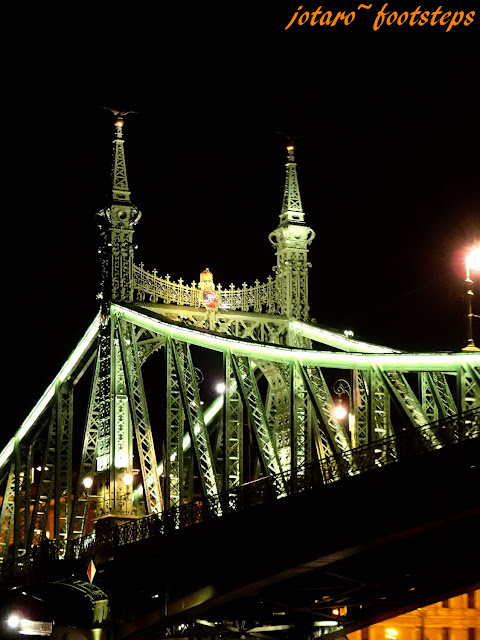 The Liberty Bridge. No, that is not one of Santa's elves sitting up there, just an optical illusion. 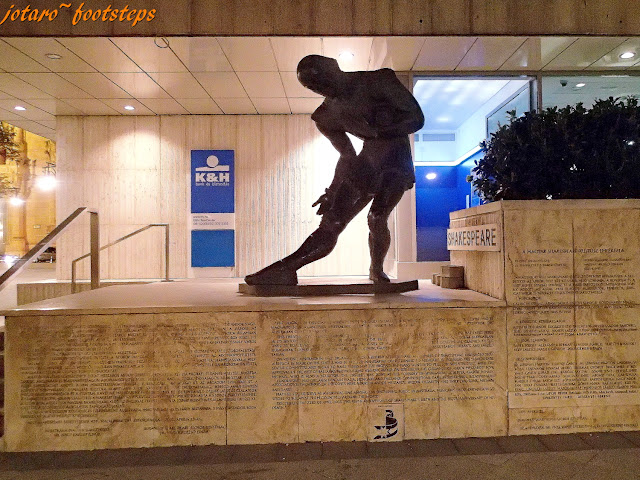 On our way back we stopped by for some Turkish kebabs, and later saw this statue of Shakespeare... Hey, this English bard is here in Budapest too! I wonder whether he did visit this city back in his time. Excerpts from his literature carved onto the stone base.