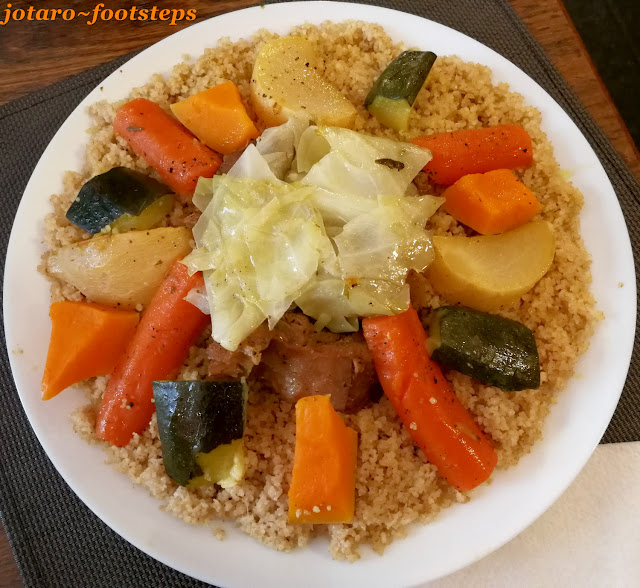 Brussels, Belgium - September 2017
While on a cycling exploration of Brussels, came lunch time and we were looking for good eats. We saw a deli at one corner of Boulevard de Dixmude, unfortunately it was closed. But Lady Luck was with us, and led us to a nice and cozy Moroccan restaurant lower down the street - the Cafe Dixmude Maes. They had just taken over operations (their signboard was not even up yet) and were still not listed on Google Maps; so do note that this present name may change later on. New or not, they welcomed us with opened arms and their other local patrons slowly warmed up to us. 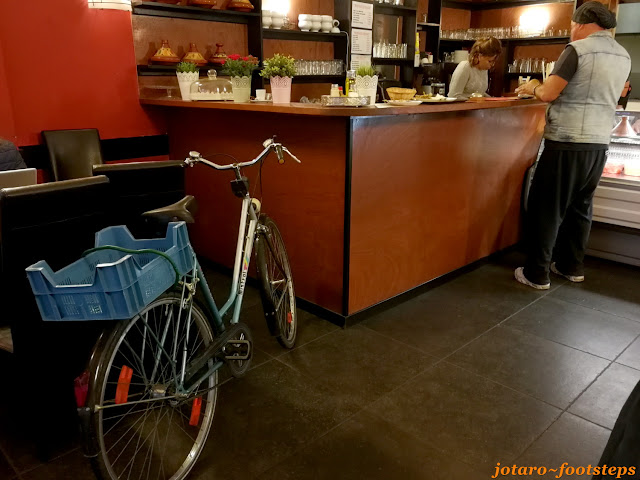 And they are bicycle friendly too. If the shop is not fully occupied they let bicycles in. It was raining then, and they allowed our five folded Bromptons to placed under a display counter. 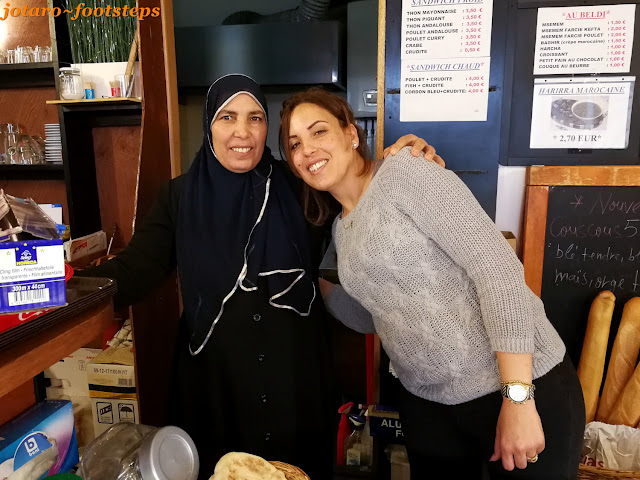 It's a family business, this young lady runs the restaurant while the mother is the chef running the kitchen. Their combo makes this a warm, neighborly place. No wonder the locals, many of whom are of Moroccan descent, frequently patronize this place. 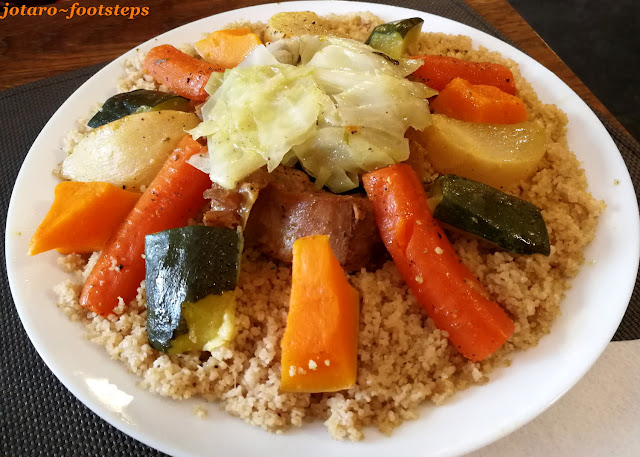 Our first dish was the Lamb Couscous. This one came with chunky carrots, potatoes, melons, cucumbers, and some cabbages hiding the large chunk of lamb below. 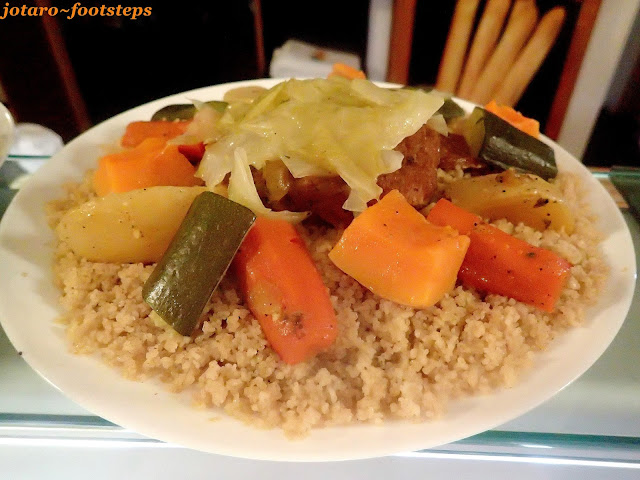 Couscous is cooked with crushed durum wheat (semolina grade). The ones used here are organically grown (Couscous Bio).
Couscous is a staple food throughout the North African cuisines of Algeria, Morocco, Tunisia, Mauritania, Libya, Egypt, and Sicily (to a lesser extent). In Western supermarkets, it is typically sold in instant form with a flavor packet, and may be served on its own as a side or main dish. The origin of couscous appears to be in the region from eastern to northern Africa where Berbers used it as early as the 7th century. Recognized as a traditional North African delicacy, it is a common cuisine component among Maghreb countries. The original name may be derived from the Arabic word Kaskasa, meaning "to pound small" or the Berber Seksu, meaning "well rolled", "well formed", or "rounded". 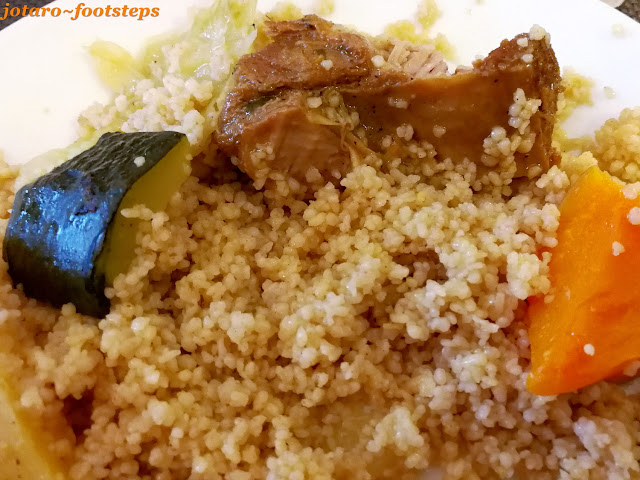 The one here was nicely done, with the couscous grains soft and had absorbed some of the lamb aroma. The lamb itself was tender and flavorful, and without any strong lamb odor (this is the wonderful part of north African lamb, their fats are stored in the tails - so less odor) 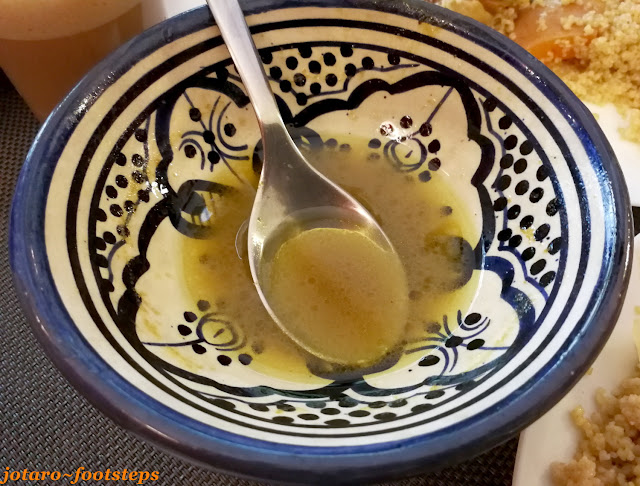 Our food serving came with some mint sauce that had some spices imbued in. Went well with the lamb... but what got me was the beautifully designed Ming blue bowl. 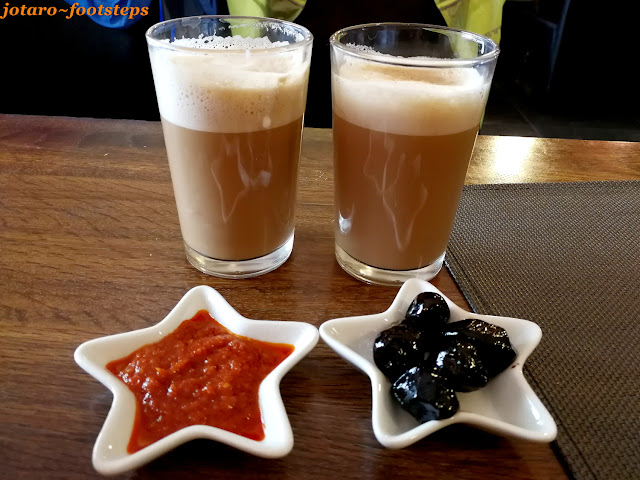 We also had glasses of Moroccan spiced coffee; the spices used are usually cinnamon, ground ginger, cardamom, ground clove, black pepper, freshly grated nutmeg and some salt - it's the coffee version of Masala Tea (Masala Chai). The ones here were had less spices, but did still give a good kick.
The chili paste and black olives are not for the coffee but were for our main dishes. 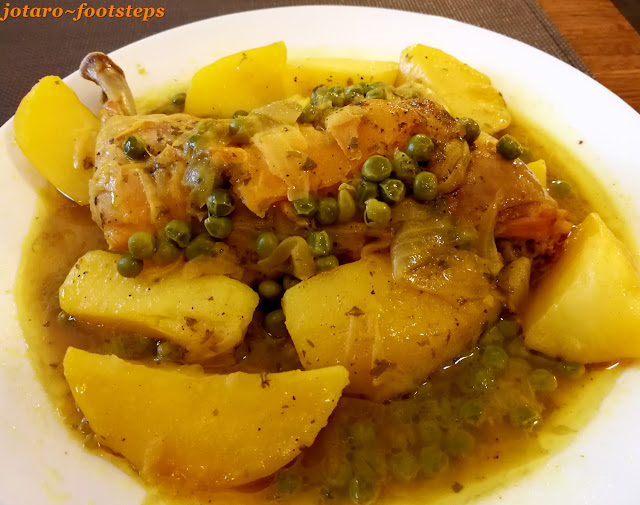 This Chicken Tagine looking very yellowish sure brightened up our table! It came with lots of green peas, soft slices of onions and chunky cuts of potatoes. And as for the yellow colour I think it comes from the tumeric used in their recipe. 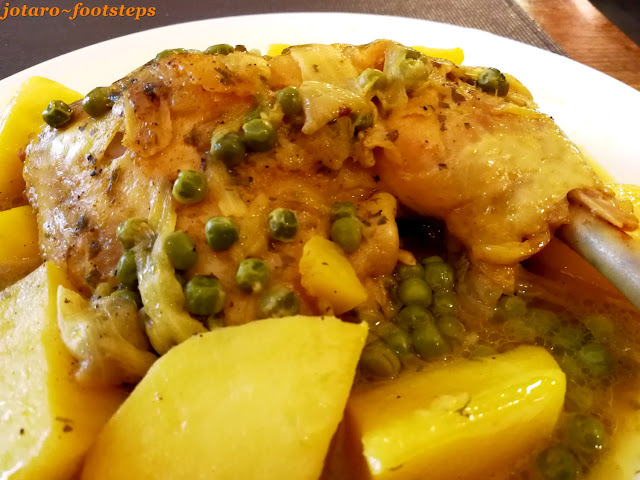 Tagines are named after the pot used in its cooking and it's interesting how a dish can be named after a pot; come to think about it there's the oriental Claypot Chicken Rice too. The tagine dates back to Harun al-Rashid who was a ruler of the early Muslim conquests. The earliest writings about the concept of cooking in a tajine appeared in the famous Alf layla wa layla (One Thousand and One Nights), an Arabic story collection from the 9th century. The dish would have been already famous amongst the nomadic Bedouin people of the Arabian Peninsula, who added dried fruits like dates, apricots and plums to give it its unique taste. 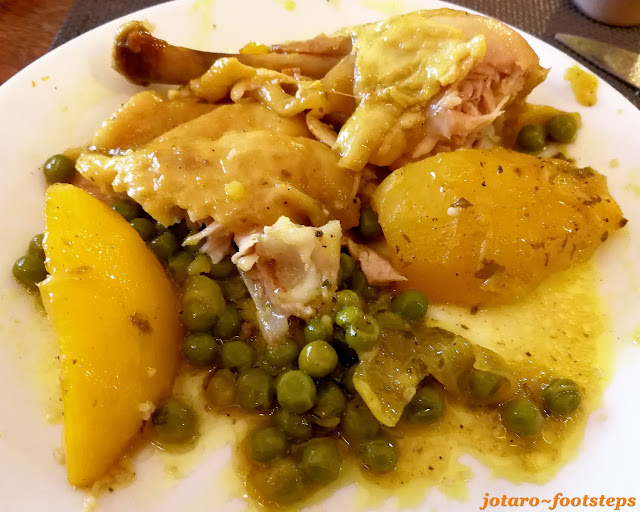 I think it is important to use a fat chicken for this dish as their natural oil forms part of the slow cooking using the Tagine pots. The slow cooking ensured that the meat are tenderly cooked without losing their essence, and the hot oil burnt the skin and outer meat just that slightly little bit to enhance the aroma.
I like this dish, simple yet tasty and easy to cook.... perhaps I should buy one of those Tagine pots. 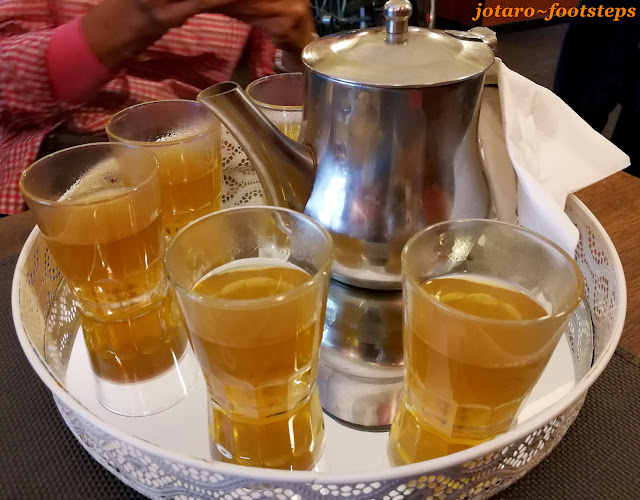 Moroccan Mint Tea, compliments of one of their local patrons. It is a green tea prepared with spearmint leaves and sugar; a combination of imported ingredients (tea from China and originally imported sugar) and a local ingredient (fresh mint) is used.
The serving can take a ceremonial form, especially when prepared for a guest. The tea is traditionally made by the head male in the family and offered to guests as a sign of hospitality. Typically, at least three glasses of tea are served, and it is considered impolite to refuse it. So we gladly and humbly accepted this offering to the pleasure of our local benefactor. 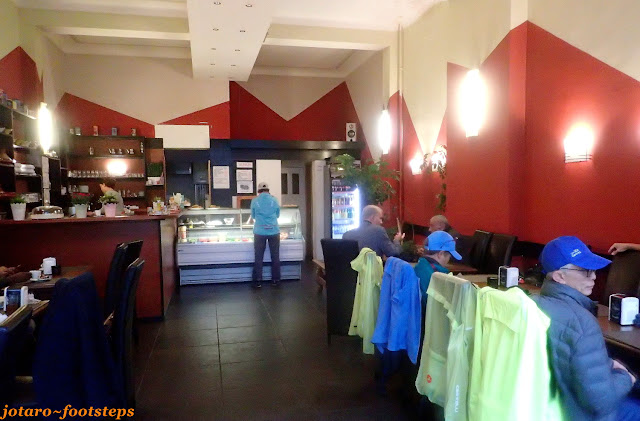 The indoor seating is simple and spacious. 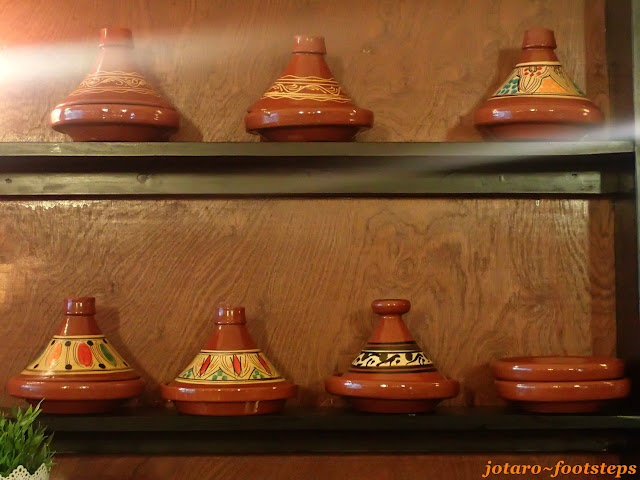 A shelved displayed Tagine pots, the ones used to cook Tagine; and is sometimes used as a dish to serve Couscous. They have a tall conical cover which is lets allow condensation to return to the bottom, so slow cooking is easy as there is no need to top up water frequently.. The ones here had beautiful Maghreb motifs. 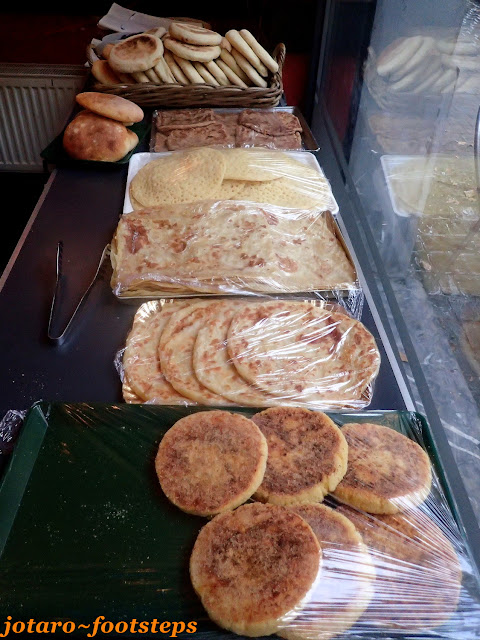 At their shop window, a counter displayed various Moroccan breads. 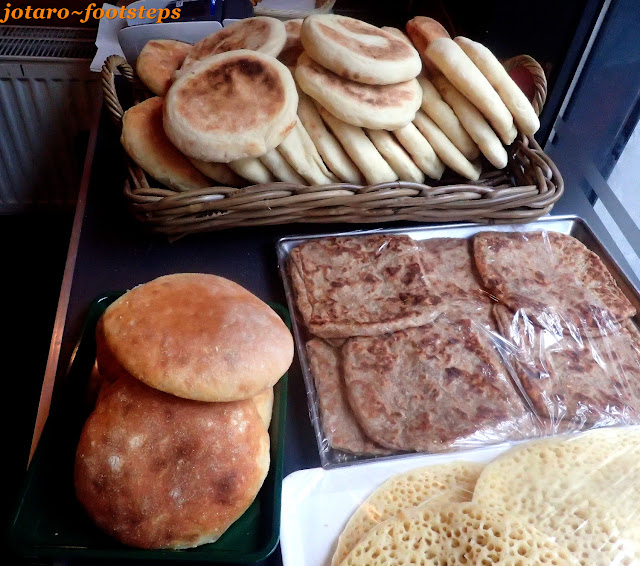 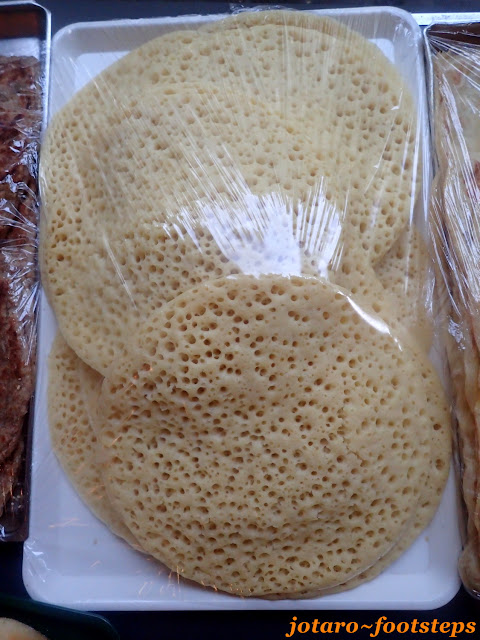 Beghrir / Baghrir.
This Moroccan version of a pancake is perfect for breakfast! Due to the yeast in the batter, the baking process causes many bubbles to form and break the surface, giving it a unique, sponge-like texture. Made from semolina flour (the one that's also used to make couscous) and topped with sweet honey and butter or jam, the beghrir or baghrir is a popular Moroccan café specialty that is best served fresh off the pan. 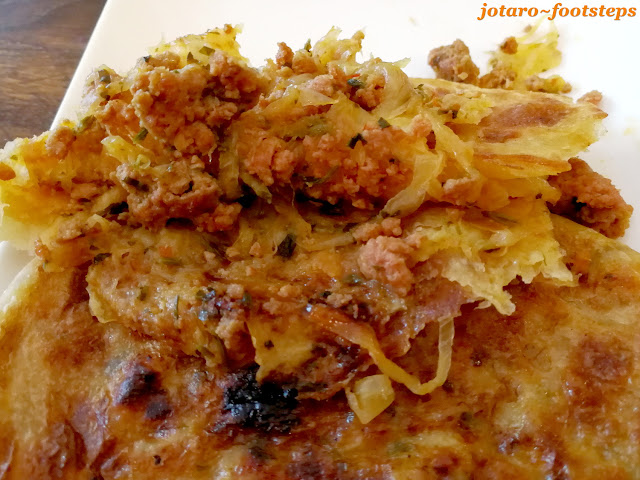 We did try their Msemen, this one stuffed with chicken fried slightly oily with olive oil. Reminded me of our Malaysian Murtabak but the olive oil made it taste so much better.
My first experience of Moroccan cuisine was indeed a pleasant and friendly one. Good food, good people, what more can one ask for? 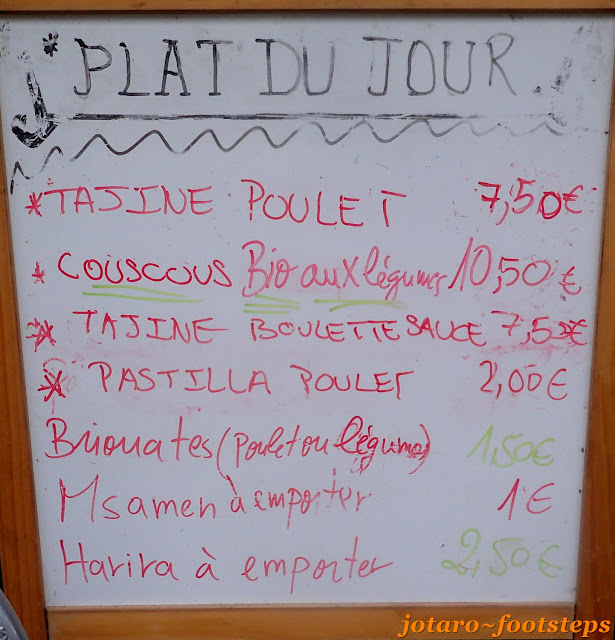 The Dixmude menu from which we ordered our lunch meal.
- Chicken Tagine (Tagine Poulet).
- Organic Couscous with vegetables (Couscous Bio aux Legumes).
- Tagine with Dumpling Sauce (Tagine Boulette Sauce).
- Briouat; either chicken or vegetables (Briouates; poulet ou legumes).
(Briouats are filled with meat (mostly chicken or lamb) mixed with cheese, lemon and pepper. They are wrapped in warqa (filo dough) in a triangular or cylinder shape, something like mini mutarbaks.)
- Take away Msemen (Msamen à emporter). This is a Moroccan bread that's quite similar with Roti Canai/Roti Pratha but can be stuffed with meat or vegetables then it's like Murtabak. 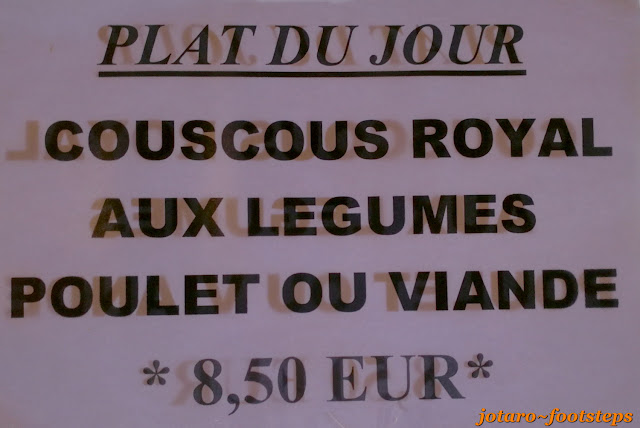 Another Dixmude menu of their daily special (Plat du Jour) this one advertising "Couscous Royal" of either chicken or other meat served with vegetables. 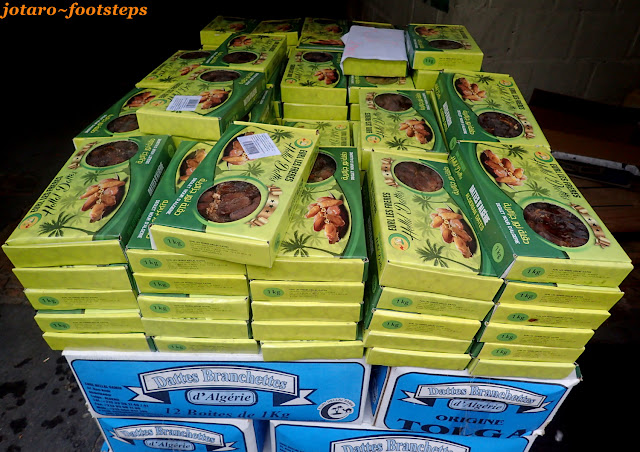 Just a side note here for dates and olive lovers, at the same row are a couple of shops that sells them. The photo above is from the shop Eur-Olives.