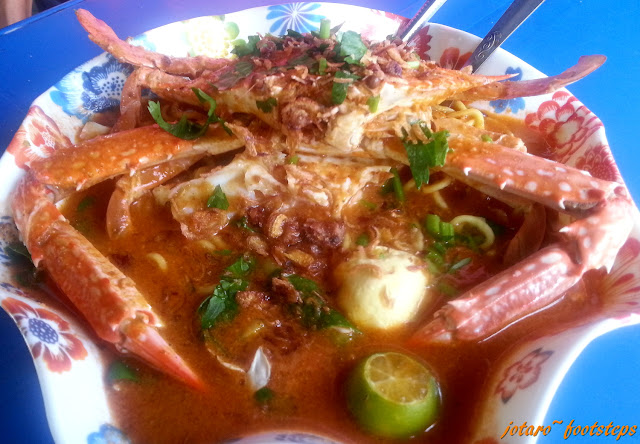 Kuala Kurau, Perak, Malaysia - September 2016
I love Kuala Kurau! We have visited it often during several cycling tours there, and each time it reveals more of itself, its people and its food. During our latest tour we "discovered" of the best Kuala Kurau food - Crab and prawn noodles at a non-descript road-side stall called Mee Udang Parit 30 - which translated into English is Prawn Noodles at Canal 30.


Yes, it's an odd name for a stall but there is a good reason for that. See, the stall is located next to an irrigation canal called Parit 30. Road are sometimes very long here or even worst still some roads may not have names! So the locals locate themselves with their vicinity to the closest irrigation canal which are usually named by the Irrigation Department. And to make it easier to locate this stall, there is a tall, blue water sluice gate just next to it with the name "Parit 30" clearly indicated. 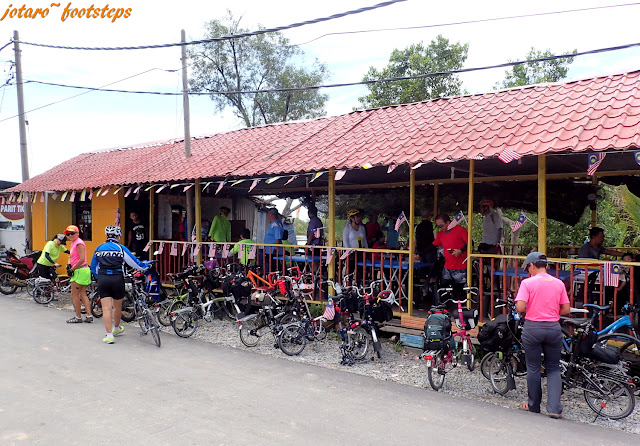 Here's a view of the stall. Within an open-wall but shaded area were many tables for it's patrons, while to one end was their kitchen. Further down was a white smaller shack, the original stall, well business is booming!
This stall is located off Jalan Pintali, which is an extension of Jalan Gula after the bridge over Sungai Kurau, coming from Kuala Kurau. Make a left turn at Kampung Batu Empat Belas and head to the far end junction. The stall is opposite that junction. 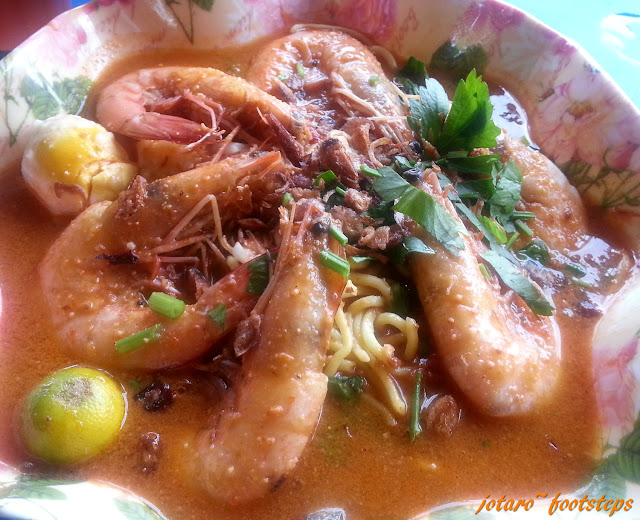 We ordered both the prawn noodles and the crab noodles. This is their Prawn Noodles Special which came with more prawns (six). The mee is rebus style (boiled) and came with a generous amount of gravy topped with a poached egg, deep-fried shallots and green garnishing. A small, cut limau kasturi (Calamansi lime) is also provided, squeeze the juice in for that extra sour oomph. 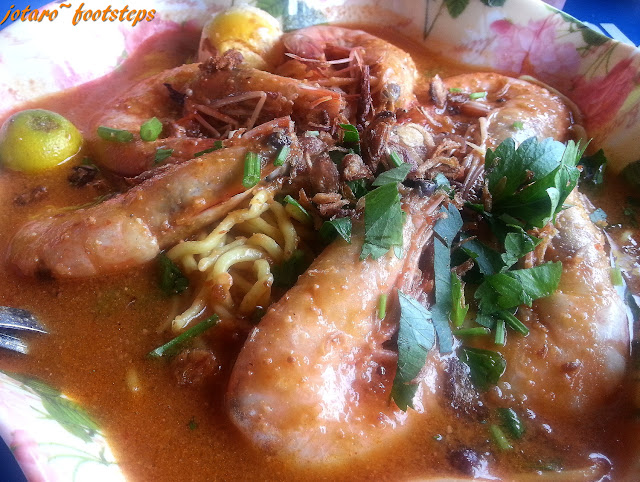 The farily large sized prawns are of the white-shell variety, with soft, easy to peel shell and tender, sweet meat AND these were definitely very fresh as it is obtained daily from the nearby fishing jetty.
Price for this dish was MYR15/-. There is the regular size one with comes with two regular size prawns at a cost of MYR4-50 per plate. 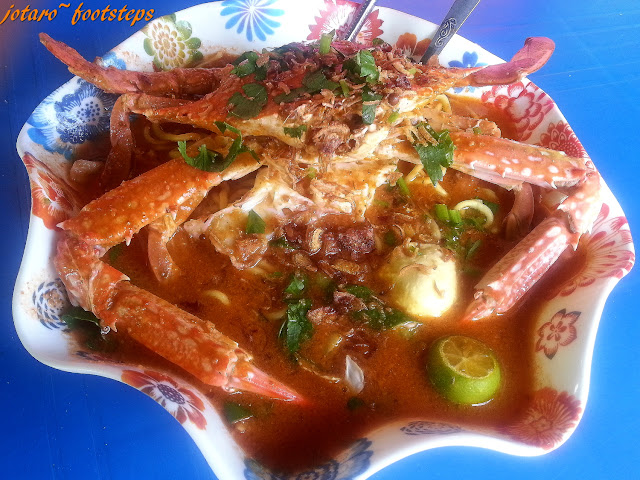 The crab noodle came with a whole flower crab, looking like a fierce looking alien sitting atop the noodles. This too came with a poached egg, deep fried shallots, green garnishing and a cut of calamansi. The gravy was well flavour, sweet but could be improved on (see remarks at the bottom). 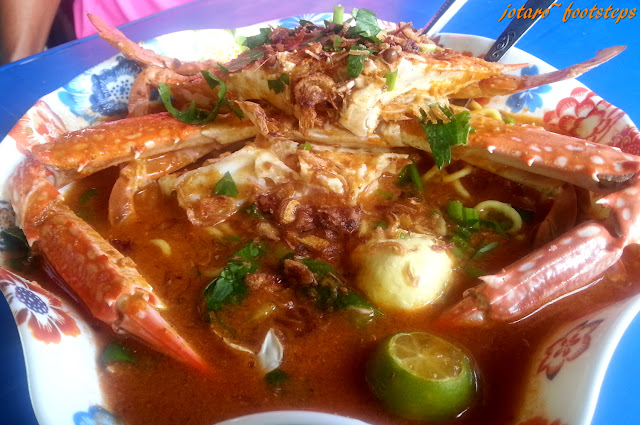 The gravy is a similar one with the prawn noodles. And as expected the crab was very fresh. A mallet is provided for smashing the pincers. This is the regular size plate at a price of MYR15/-. The special which comes with two crabs costs MYR25/-.
Other than the rebus noodles, they have fried rice or just prawns and crabs without noodles; see the menu below for an elaboration. 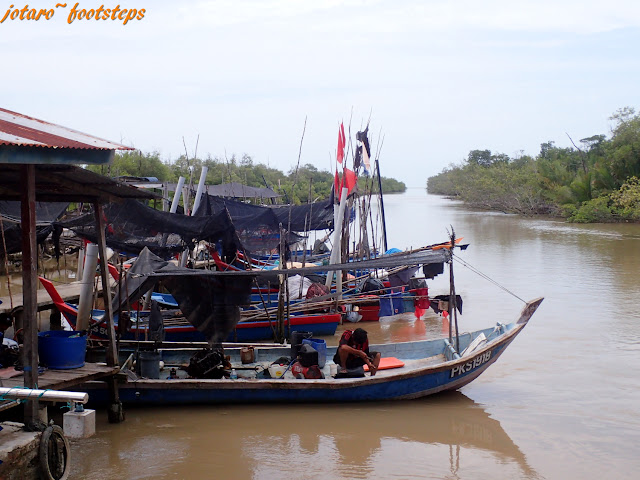 Dining here was fun, there was that rustic atmosphere with friendly locals. And there were bonus views too, like this seaward view of fishing boats on the canal. At the far end was the sea with its coastal edges lined with mangrove swamps. 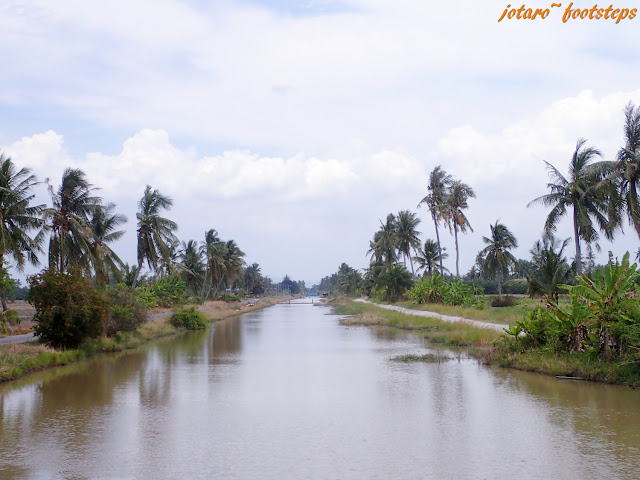 This was the landward view, one of calm coconut trees with their fronds billowing in the light breeze. 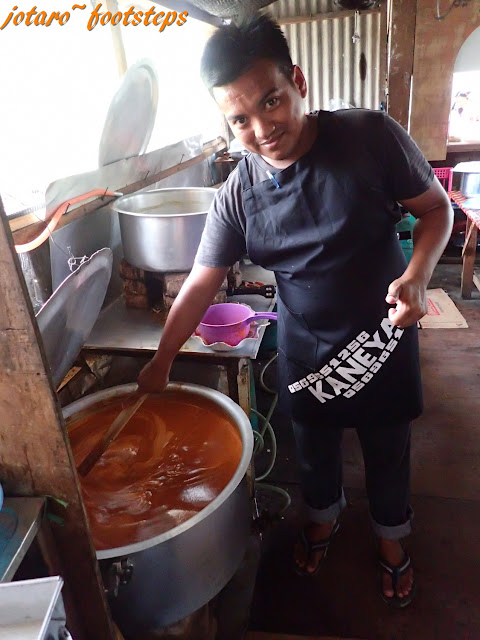 Business was brisk, per day they used up two of this big pots of gravy. A note for improvement here, it would be great if they boil clean prawns and crabs separately and use the flavoured boiled water individually for the gravy. This way, the gravy would have a more distinct crab or prawn flavour; just like the Mee Kuah Ketam in Bukit Mertajam. 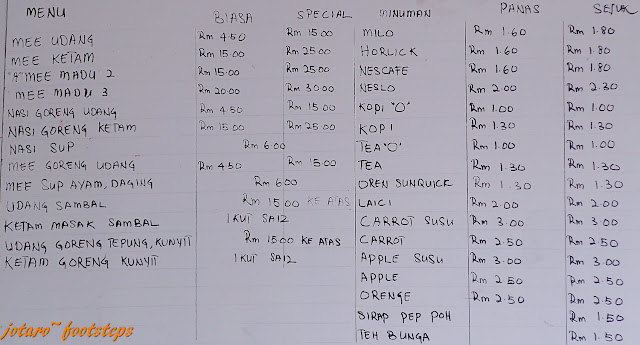 You are at - Jotaro's Blog / FootSteps / YummY! / Malay & Indian Food / Prawn & Crab Noodles @ Mee Udang Parit 30 Kuala Kurau
If you like this, view my other blogs at Jotaro's Blog
(comments most welcomed. if you like this pls share via facebook or twitter)
Posted by Jotaro Zen at 12:50 AM