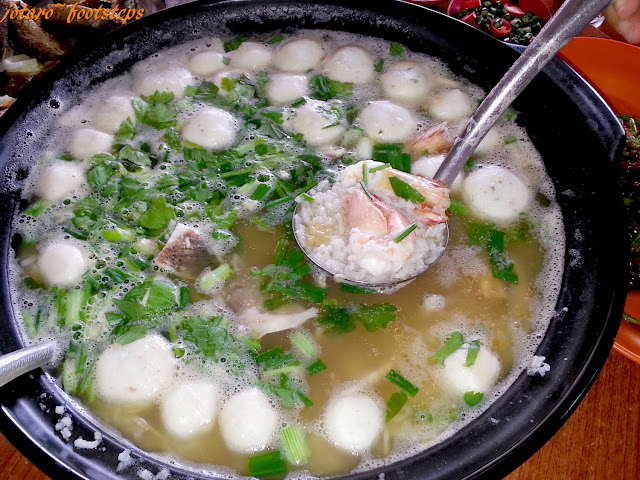 Matang, Taiping, Perak, Malaysia - September 2016
The food in Taiping town itself is not something to shout about; but around it's vicinity are some great food. Kuala Sepetang's seafood is getting more renowned and there is Mee Udang Mak Jah which sells very good prawn noodles. And then there is that unique Simpang Fireworks Char Koay Teow.
This time our Taiping-based buddy KT Wong took us on a cycle ride with a marvellous seafood porridge lunch at the Light House Restaurant in Matang, which is located half-way between Taiping and Kuala Sepetang. But before we dig into the porridge, let's start with a good appetiser, one which really whetted our appetite for simple but good fish - Deep Fried Ikan Belanak (Grey Mullet). The flesh was superbly sweet with the skin and fins deep-fried until their crispiness was very good to chew on. Damn! Even the crispy heads were good, and some took to happily chewing on them and eating them in. We liked this so much that we went for seconds (each serving had fifteen fishes). 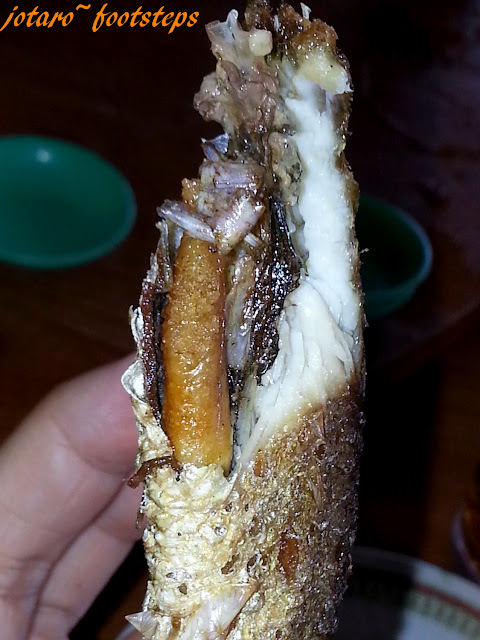 But the best part of the Belanak are there eggs/roe. When deep-fried they are tasty and also rough powdery to swirl in the tongue. Our timing was a bit out as it was off-season for pregnant Belanaks, still we managed to get some with a fair amount of eggs.
I think the Belanak is under-rated; for me, with its sweeter meat it is better than the Japanese Shishamo. It may not have a much eggs, but the eggs which are slightly larger taste better and are definitely better to chew on. 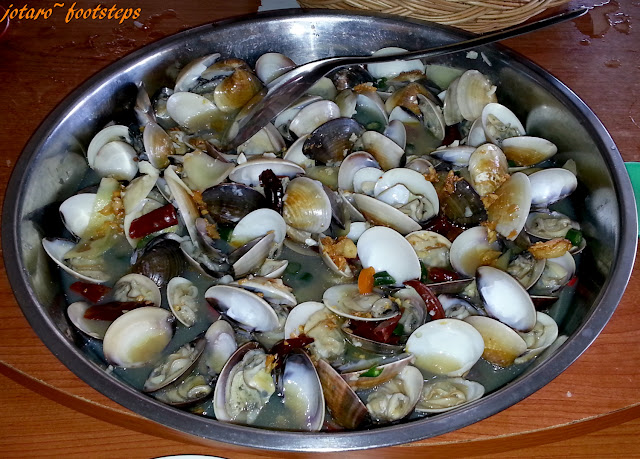 Next up was the Seong Tong Lala (Clam Soup). These were clams of the smaller variety but also very sweet. The cooking was done well, just long enough for some of the clam flavour to seep into the little amount of soup, and yet not leeching the clams of their succulent taste. 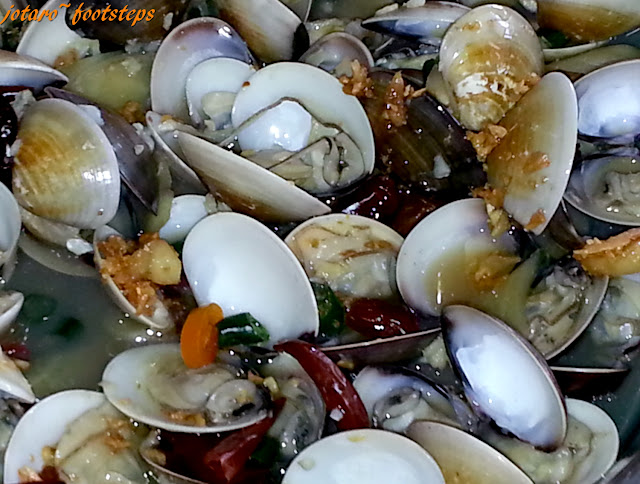 See how fresh these clams up; mouth-watering fresh! 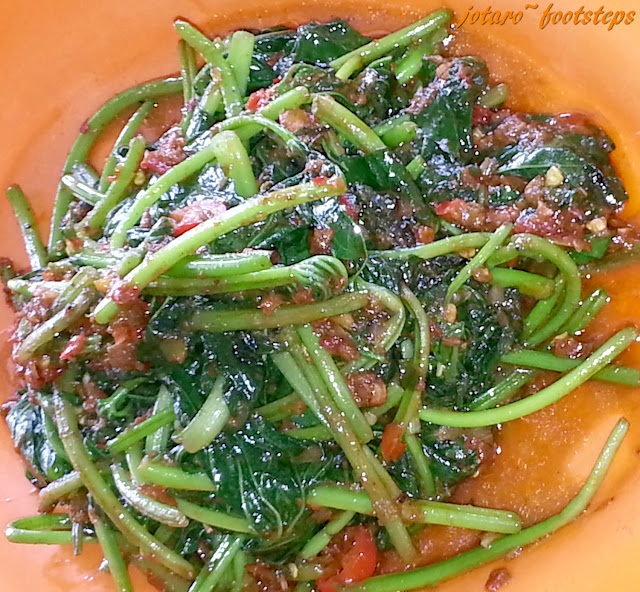 This stir-fried potato leaves with sambal belachan were very good too. Here they use they self-made belacan which had very strong aroma and taste; these were well stirred into the vegetable. It's pretty hard to find this dish done this way in the Klang Valley as most restaurants use a chilli-bean paste base instead and add too much water. 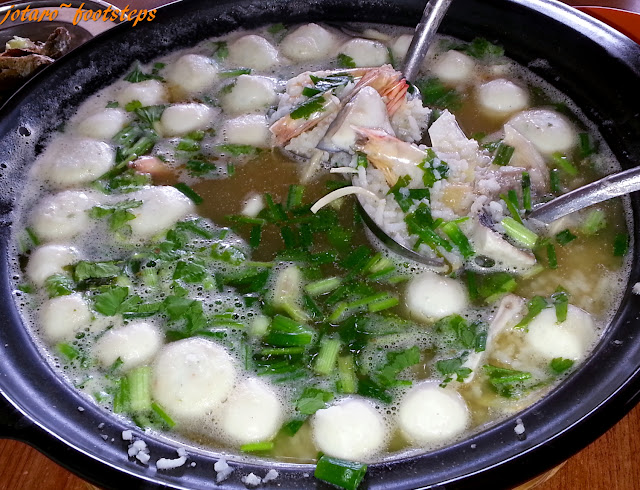 AND here comes our main dish - the seafood porridge. We had ordered one with prawns, silver pomfret and fish balls. It came in a huge clay pot almost a foot across with steaming soup speckled with green parsley. This porridge is of the "harder variety", i.e. cooked rice is added to the seafood soup and further boiled; the rice is fairly soft but not as soft as rice broth cook with raw rice from the very start.
Note: one can also order porridge that includes crab, but we were short on time so didn't. 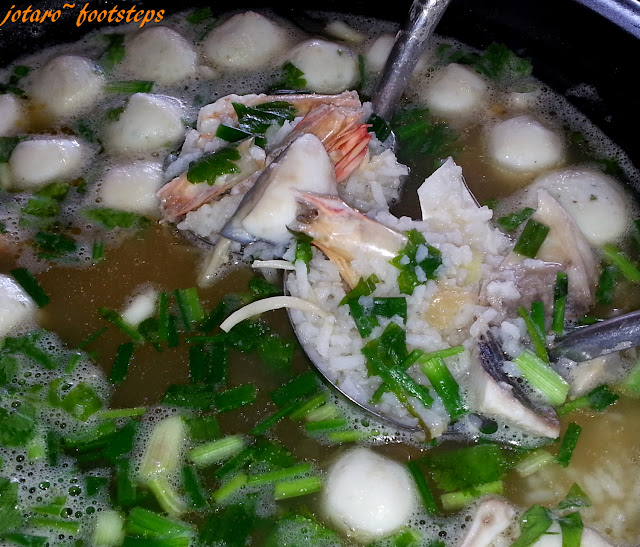 The seafood used here are super fresh - the prawns were of the moderate-size white shell variety. The silver pomfret were cut into large slices so that their tastiness were retained. And the fish balls really had a good fishy taste, no short changing here. 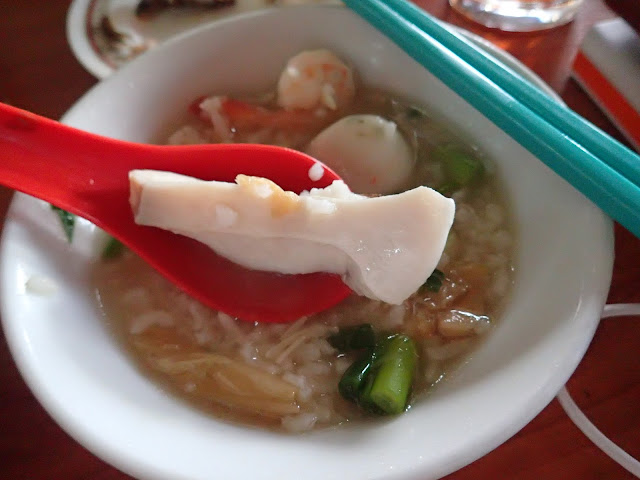 They did use fairly large-sized pomfrets, with larger cut slices so that there was adequate meat to savour. 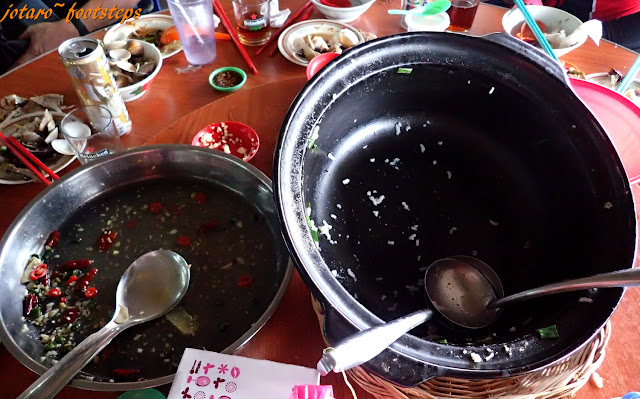 A testament of how good the meal was - bowls and trays all finished until not a drop of soup was left. It's that good, and no we were not greedy. 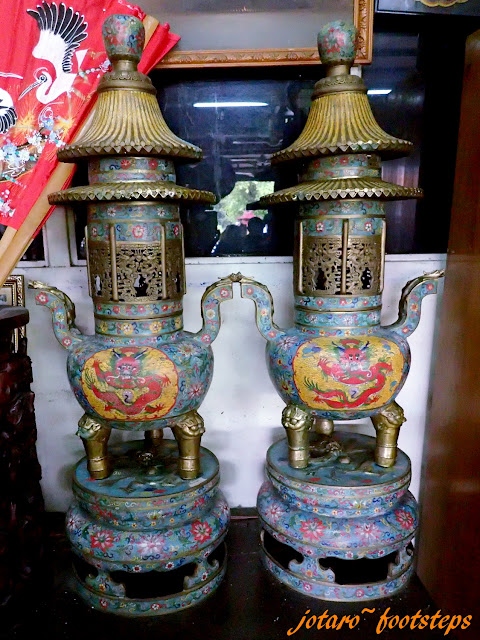 For those who are interested in antiques, one corner of the shop offer a good range for sale. Just ask for Ah Meng, the shop owner and he will happily show you his stash. The above are a pair of colourful enamel burners. 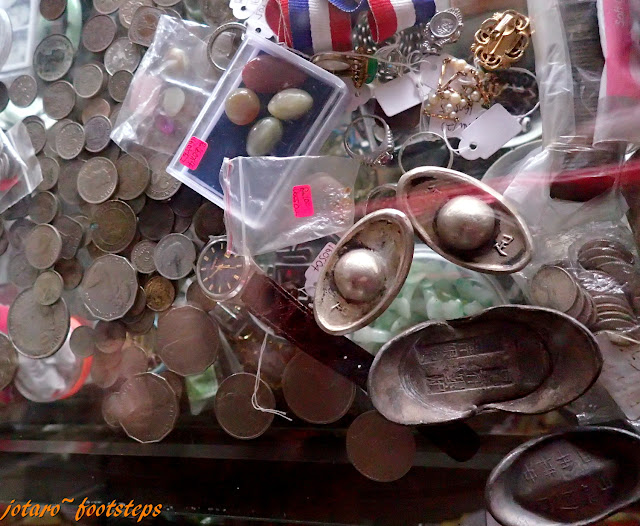 .... and there were lots of old coins, including Chinese silver taels.

You are at - Jotaro's Blog / Footsteps / YummY! / Chinese Food / Good Seafood Porridge @ Light House Restaurant Taiping (海燈砂煲海鮮粥)
If you like this, view my other blogs at Jotaro's Blog
(comments most welcomed below. if you like this pls share via Facebook or Twitter)
Posted by Jotaro Zen at 8:56 PM