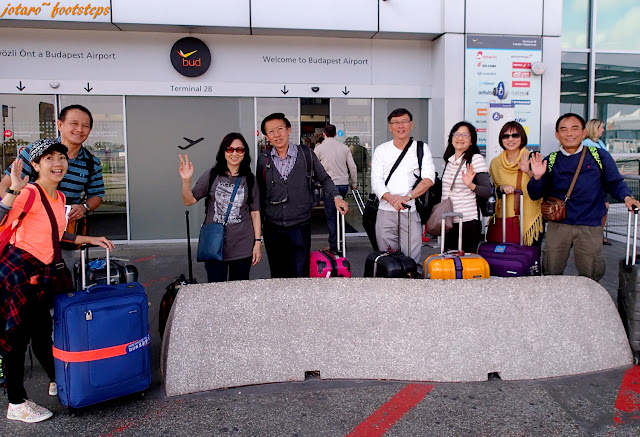 Budapest, Hungary- 5th October 2015
Today we say goodbye to Budapest, to Hungary and to Europe as we will be heading back home. But before that we have a last morning in Budapest. So what shall we do? Go to the market and buy a pig? We did go to the market but they did not have any pigs there, but still it was an interesting place. 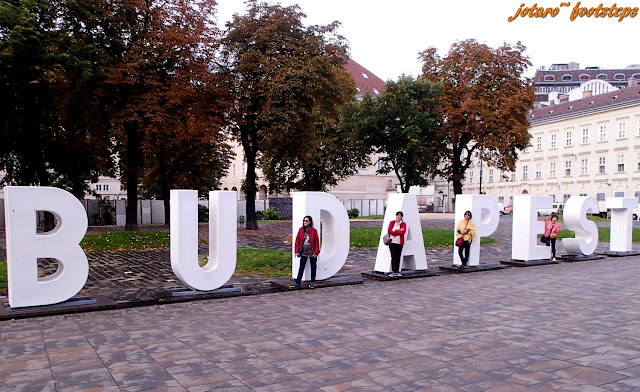 We only had half a day, just the morning in fact in Budapest, before we catch our flight home. After a quick breakfast we took a walk to the largest and oldest indoor market in Budapest, called the Great Market Hall.

When we arrived, we were glad to see that it was indeed an old building, old but well maintained. The market is also called the Central Market and in Hungarian it's called the Nagyvásárcsarno. Built around 1897, the neo-Gothic designed market has a variety of stalls spread out over three levels; a basement, a huge ground floor and a mezzanine level.
We visited the ground floor and mezzanine but missed out the basement level which have butcher shops, a fish market and pickles shops too. 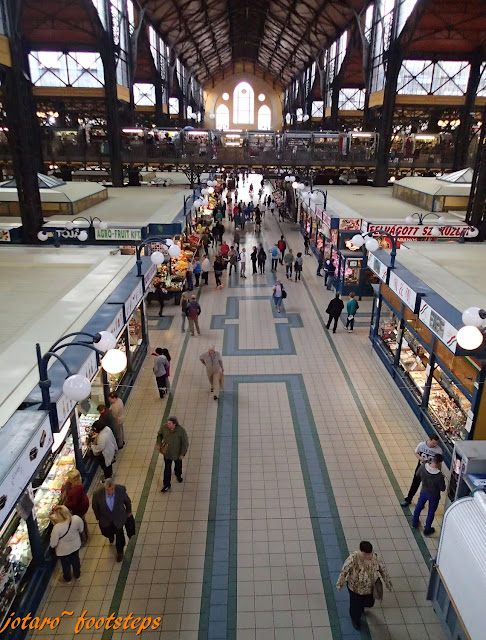 This is the interior of the market, with it's tall ceiling and a mezzanine floor that just skirt the perimeter of the building it looked like a great hall, now wonder it's called the Great Market Hall. With a built up area of 10,000 square meters it is huge and we definitely did not manage to see all of it in that short morning. Just for note, the market is closed on Sundays, opens at 6:00 am on other days, and closes at 5:00pm Mondays, 6:00pm Tuesdays to Fridays and 3:00 pm Saturdays. 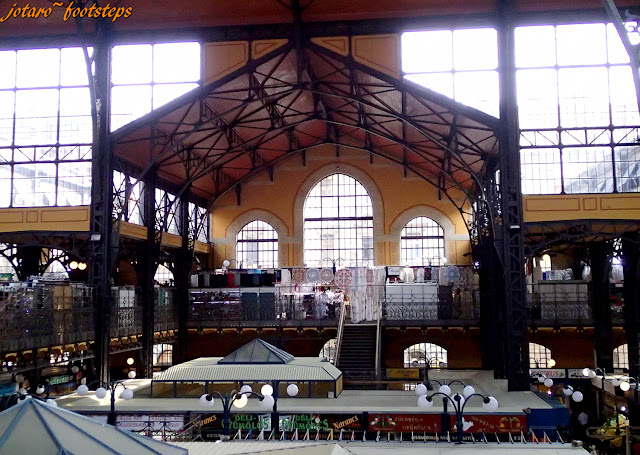 With high walls and tall windows, it lets light in naturally. The roof design is unique, somewhat like an arch without a bottom chord which emphasised the volume and height of the building. 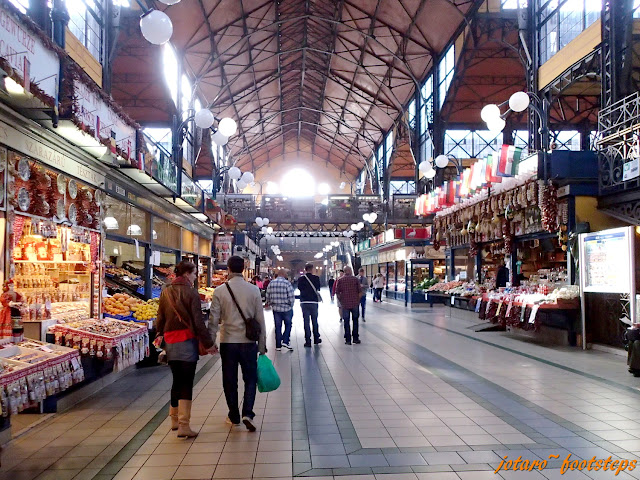 We spent most of our time exploring the ground floor which has shops selling produce, meats, pastries, candies, spices, and spirits. The market was very clean and dry, with the stall presenting their products in a very hygienic way, most of the preparation are done behind the scene. 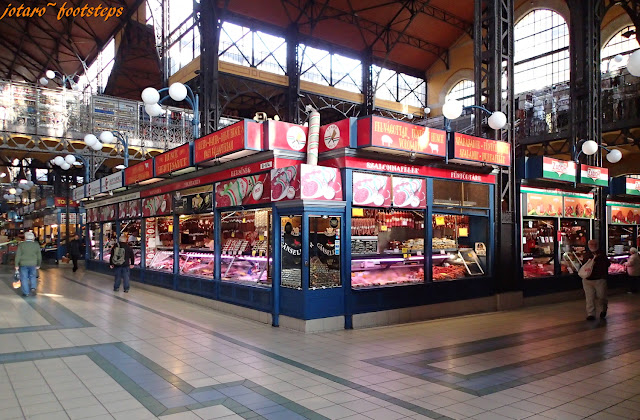 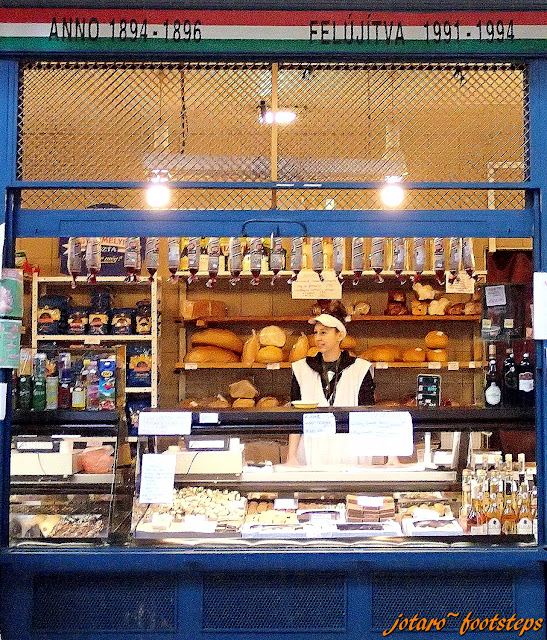 Most of the shops are nicely decorated, like this dark blue quaint shop selling cheese, liqiour and pickles. 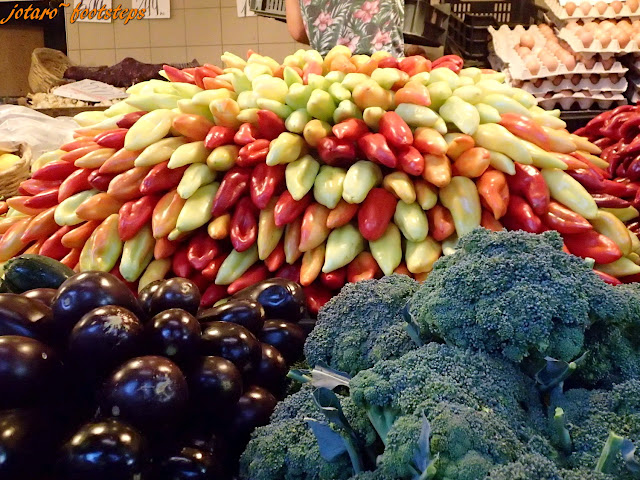 Even the green-grocer had arranged is vegetables very colourfully. 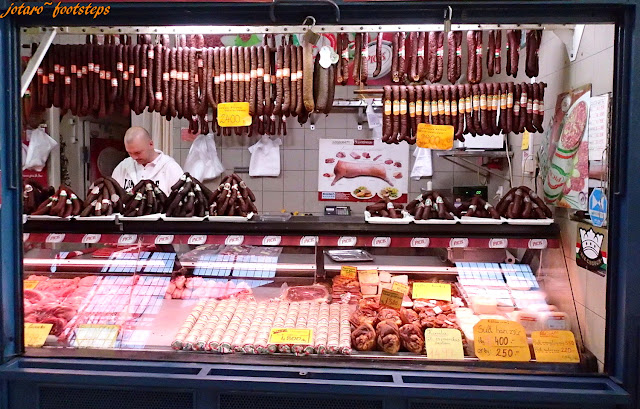 Most of the shops at the central area were selling process meat. Bacon and ham were displayed in chilled glass counters... 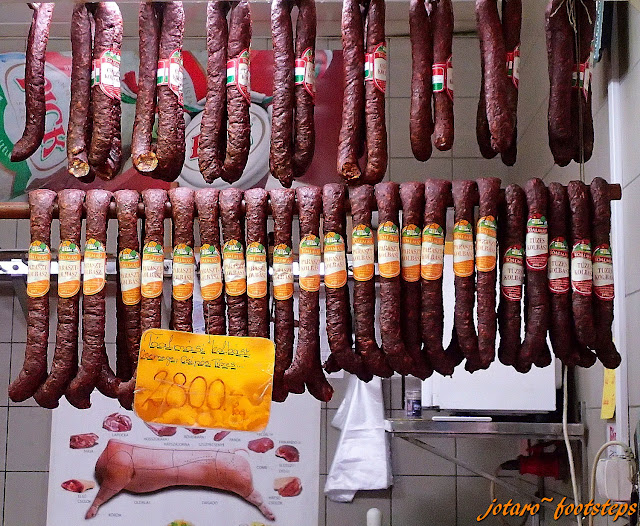 ... while dried sausages hung from the ceiling. 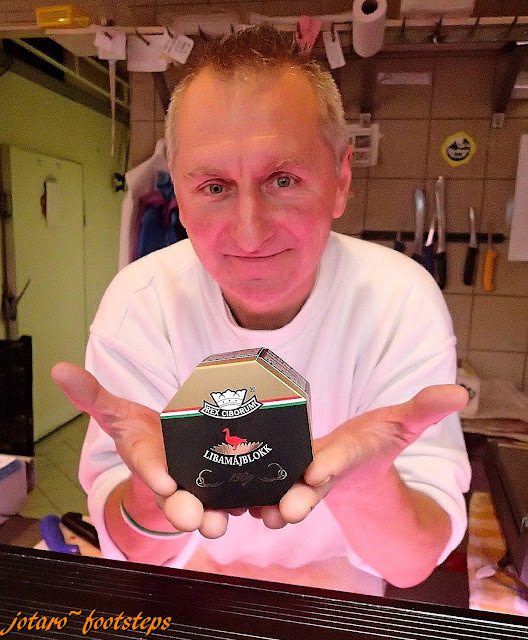 We shopped at one of these and were tempted to buy those lovely smelling sausages, but thought the better of it as we would be flying back. Instead we bought a few cans of foei gras. 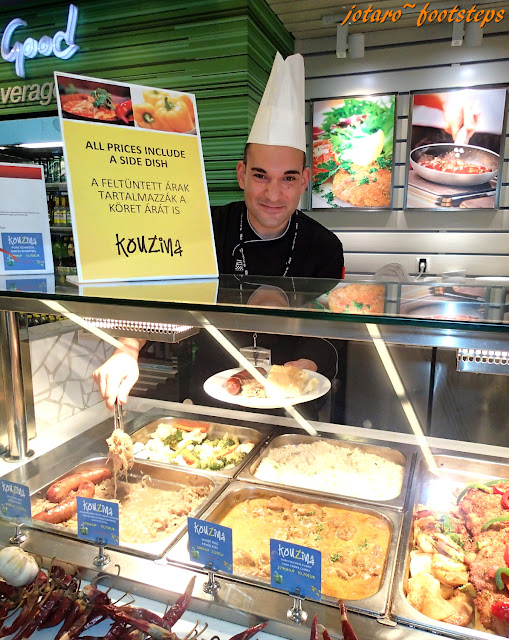 Up at the mezzanine were many eateries, we stopped at one for a simple brunch, and after seeing all the meat below, of course it had be sausages! 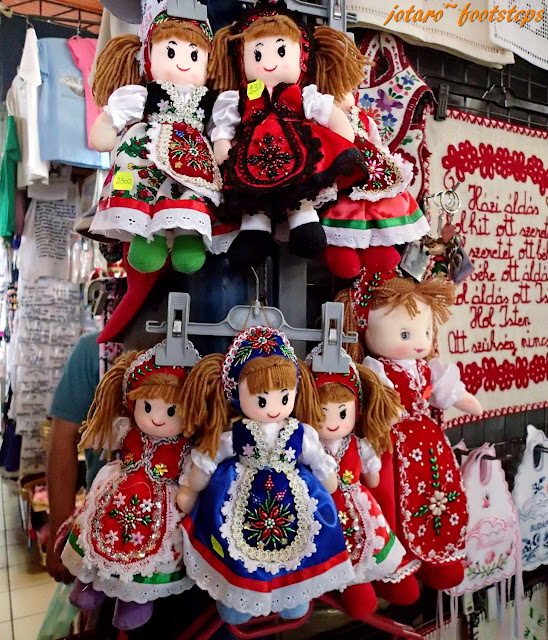 There were many other shops selling souvenirs: dolls, table clothe, T-shirts, etc. 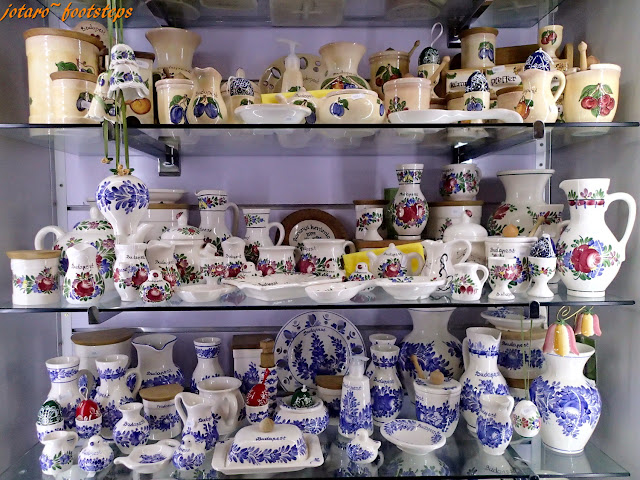 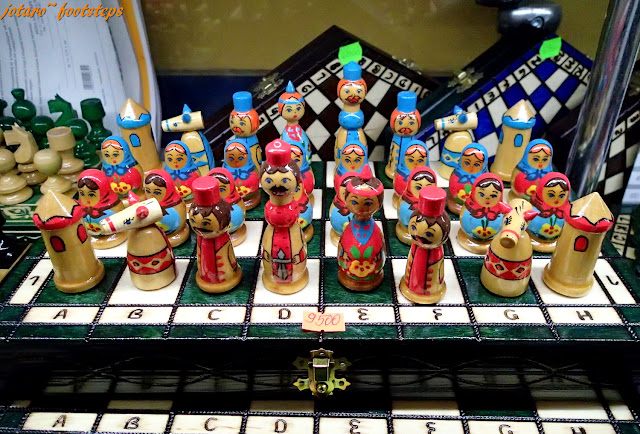 And even cute chess pieces with Hungarian looks. 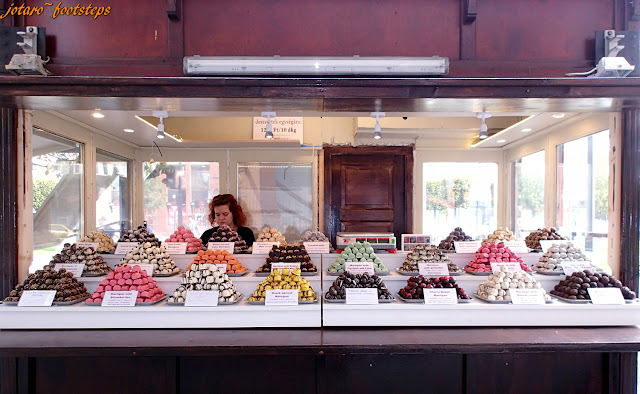 Our walk back took us through the streets, and more food stall along the way. 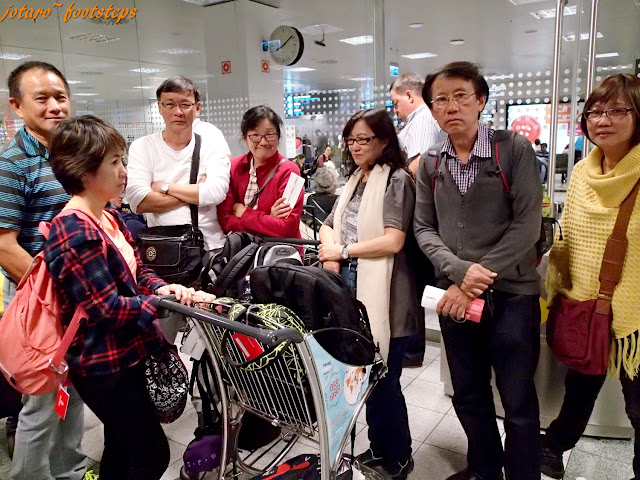 We quickly packed up and took a van to the Budapest Ferenc Liszt International Airport for our flight back home. But bad news awaited us our flight was delayed! 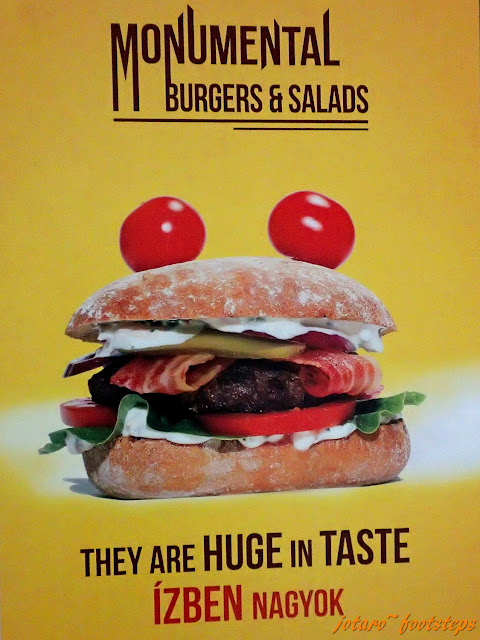 It was a long delay of four hours; we were given food vouchers and up at the restaurant on the first floor, this cheery burger looking like Kermit the Frog did cheer us up a bit.
Our delayed flight did have a snowball effect, when we arrived in transit in Dubai the connecting flight had taken off. All in we were delayed nine hours, and more food vouchers were given and we just relaxed ate and drink to while away the hours.
All in it took us almost twenty-fours hours to reach home! There was a silver lining in the delays though. Back home we wrote to the airline and made a claim under European Aviation regulations; based on the hours of delays and the flight distance we were entitled to €600 each. The airline agreed to pay €300 each, claiming technical problems caused part of the delay. Not too bad as this amounted to 15% of our total expenses of the trip!