Sites : The Tip Of Borneo

The Tip Of Borneo 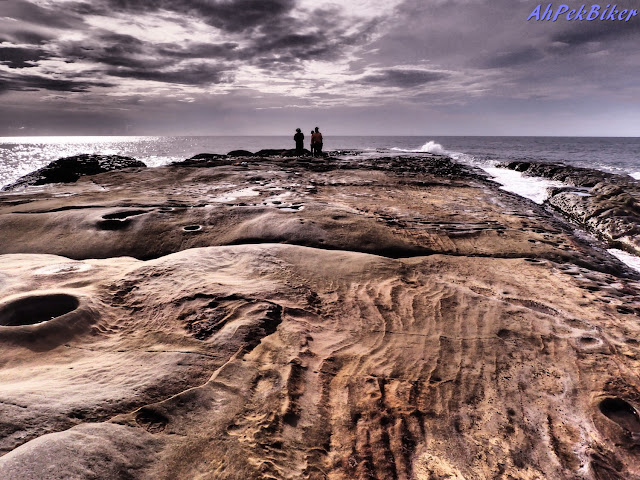 The Tip of Borneo is an awesome place, we went there on a cycling expedition to ride from Kota Kinabalu to this tip. To some it may just be a piece of rock, but for me it was a marvel of nature; it was nature at it's best to create an art form at a strategic location that presents an experience of sound, wind and colours that set my heart pounding in excitement and awe.

Located at the "left ear" of the dog-head shaped Sabah; it is the northernmost tip of the island of Borneo, the third largest island in the world. This tip separates to major seas - the South China Sea and the Sulu Sea. Right at the tip is where the two seas meet in a dramatic presentation by Mother Nature. 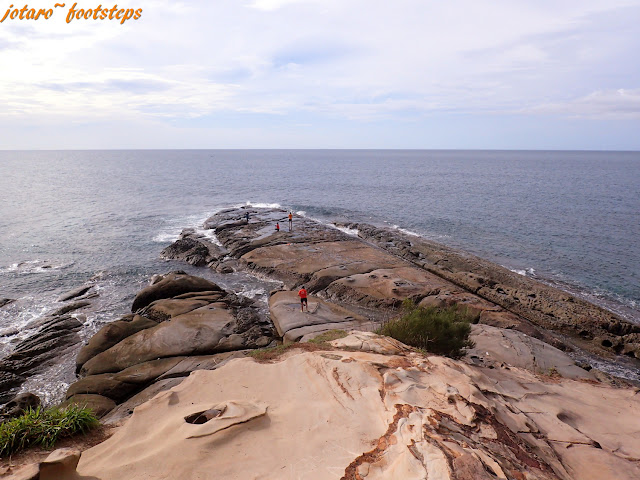 There are many tips on many islands, at many of these other places the view of the sea is usually from a hill or cliif high above. What makes the Tip of Borneo (ToB) unique is it is a sharp rocky projection about three hundred metres long that sticks out into the sea so that the tides and wind can do their artwork on this rock. This outcrop is just about a metre above sea level; standing right there almost at sea level one feels the power of nature through its whistling wind and the thunderous roar made by the waves where the two seas meet. 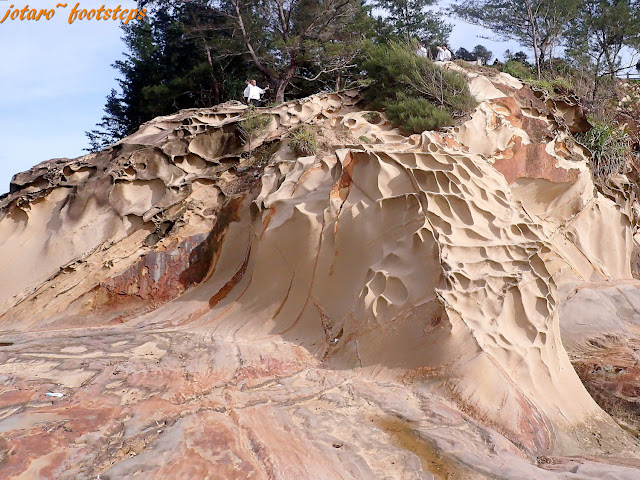 Another interesting thing about the ToB is that while the rocky outcrop compose of some hard stone, the cliff leading to it (yes, there is a low cliff) is made of yellowish sandstone. But fear not, the winds and the waves have carved out pocket steps for one to go down. 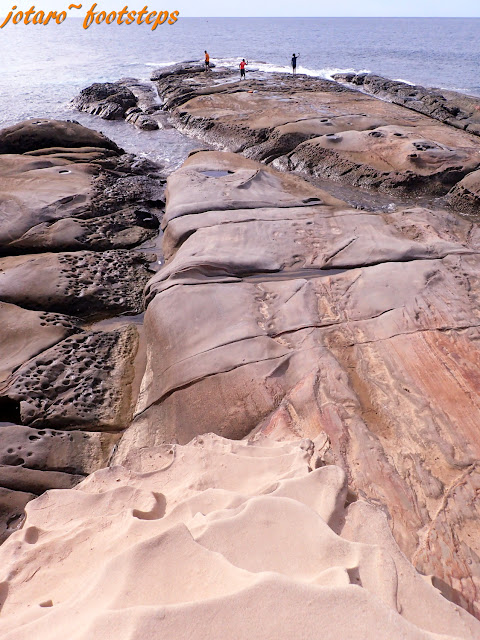 Do climb down with care though, the steps are rather steep. It's best to face the cliff when climbing down, just like climbing down a ladder. 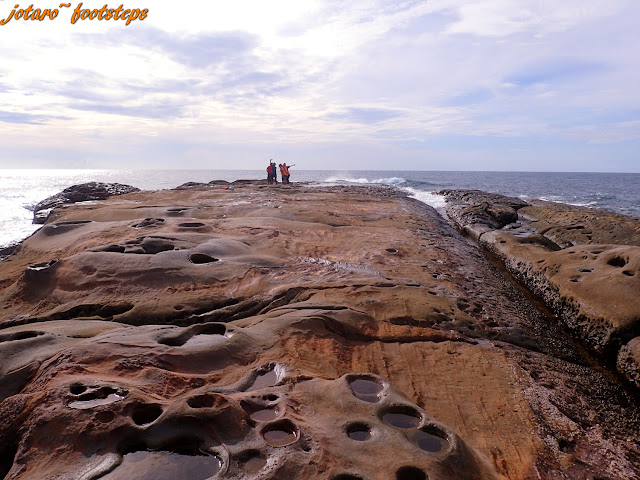 Down at the flat level, the rock is pock-marked with holes filled with water. These holes somehow connects to the sea and can be quite deep; avoid stepping into them.From here it looked pretty calmed, so we walked further in. 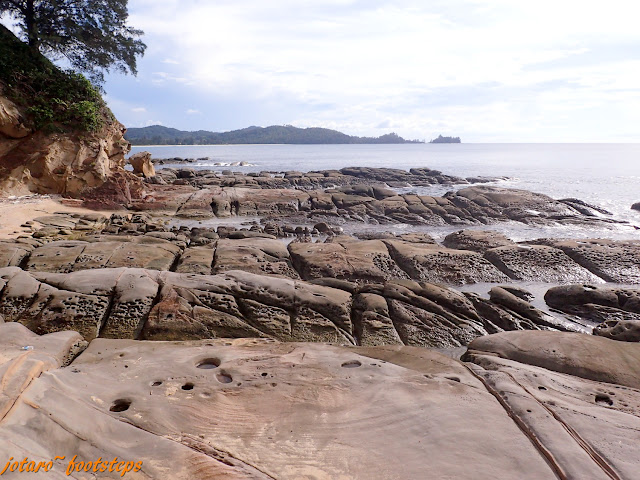 To on side are smaller rocks with lines cut into them perpendicular to their length. These don't seem to be caused by the sea waves; more likely they were formed by the wind blowing along them as it swept round the corner of the cliffs. It must have taken aeons for these lines to form. 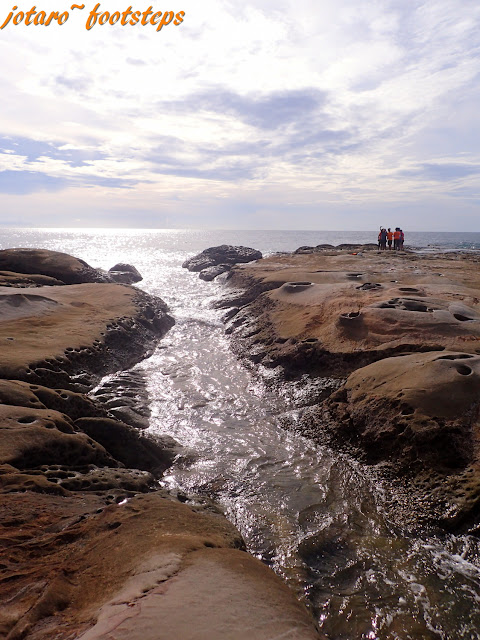 Ahead, the sea run into the wide cracks of the Tip, like a shallow stream flowing inwards. 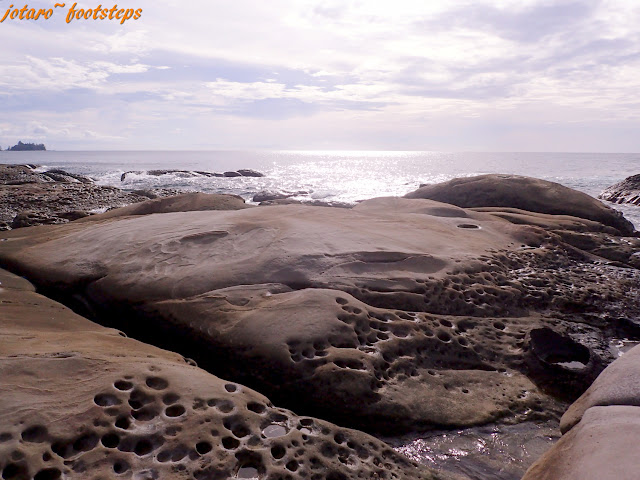 Further outwards, the circular formation became more numerous, the sea water does not come spraying out of them. Instead they seem to drain the sea water away as the waves splash in. 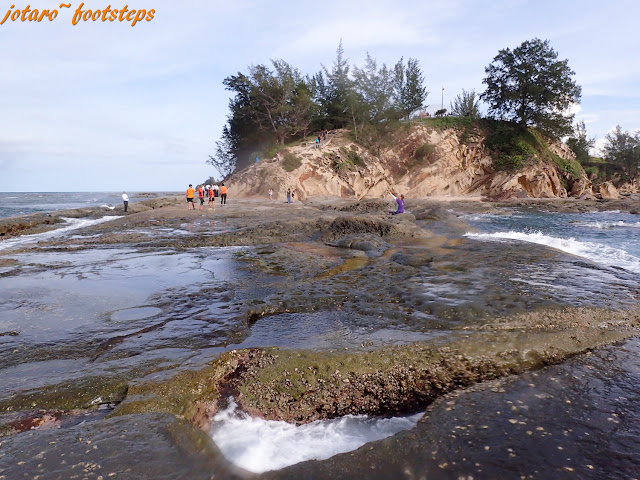 Further down, the rock surface is wet and mossy, making it slippery to walk. It's best to wear sneakers with a firm-gripping tread. I was wearing my Keens sports sandal, being not enclosed they let the water flow through and yet had a good grip. Even then I walked with care, looking for barnacled surfaces which were less slippery. Here and there were smoothed out cracks on the rock... more obstacles to avoid.
Nevertheless, the resound roar of the waves grew louder and louder; like a siren it drew me forward, my heart beating in unison with the crash of the waves on the rocks. 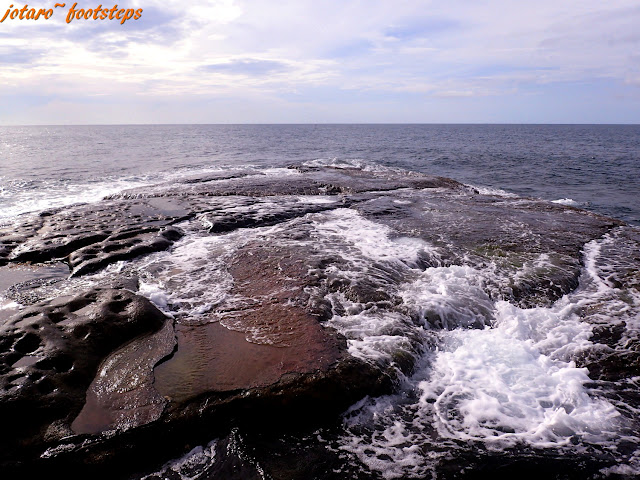 Right at the tip of the Tip, the surface was presently exposed. It was an instant of intermittent calm, peaceful with a light breeze blowing across. 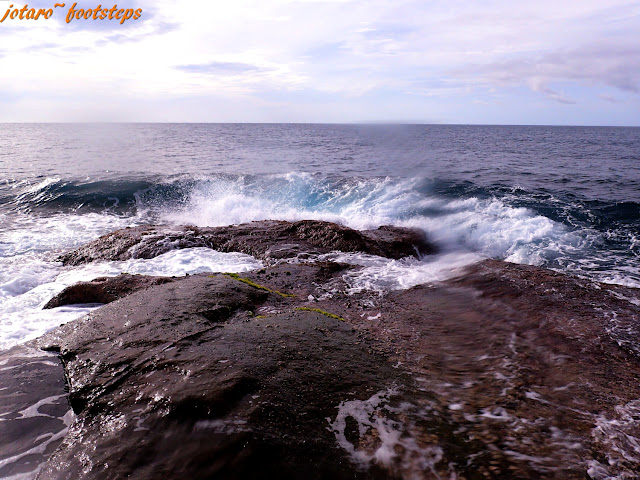 THIS IS THE MOMENT!
The waves came rolling in, crashing onto the rocks with a loud roar. 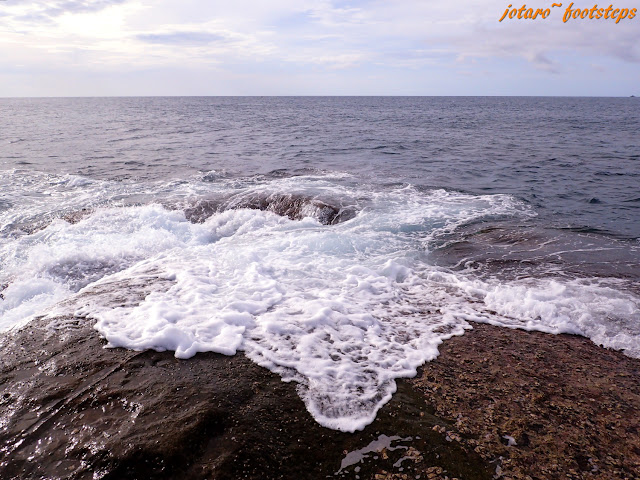 The water swept in onto the surface... 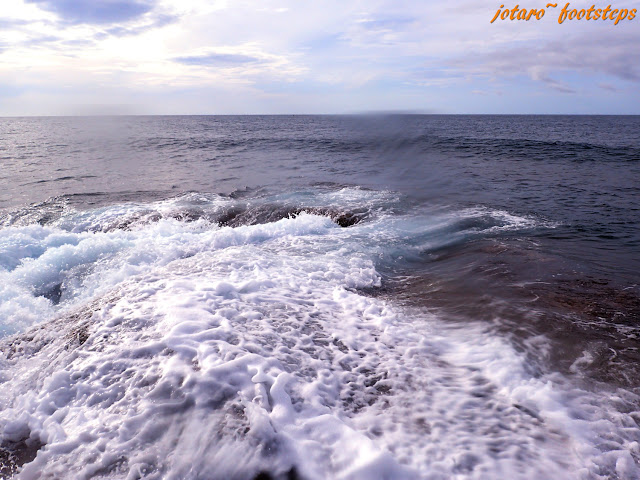 ... totally covering the front section of the Tip. The water lapped up high with a stronger wind blowing now, and I was totally drenched and cold but loving every moment of it. The feel of nature's power is awesome, one has to respect that.
Another waved formed and started rolling in... 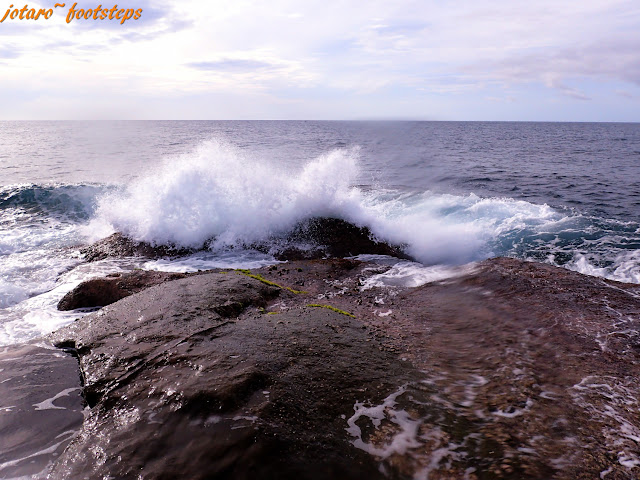 This was even a larger breaker, shooting up high and totally drenching me from head to toes.... ecstasy!
More waves rolled in and I stood my ground anchoring myself as best as possible onto flattened out barnacles, yet the waves kept on pushing me. 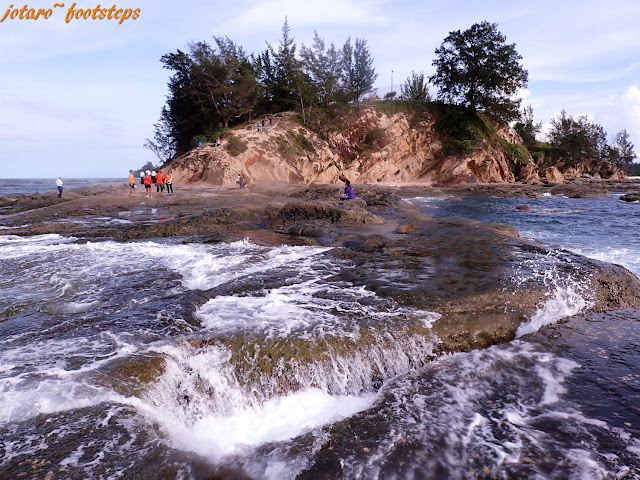 Looking back to the cliff, the water had covered the front half of the Tip and drained down into the holes and cracks. After fifteen minutes of fun and multiple lashings by the waves, I started walking back. 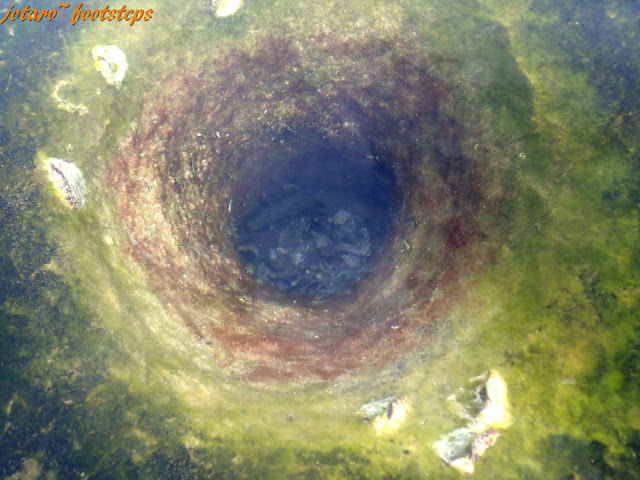 Along the way, I stopped to peer down into those holes. Inside small fishes were swimming around but darted further down when I tried to photograph them. 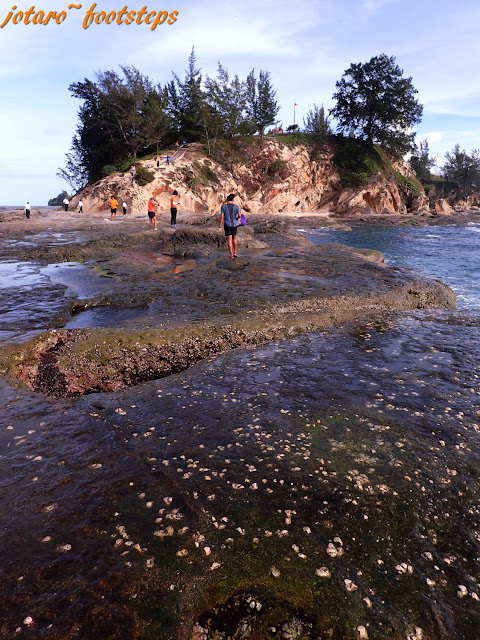 The calm moments between the waves to catch a good view of the rock. 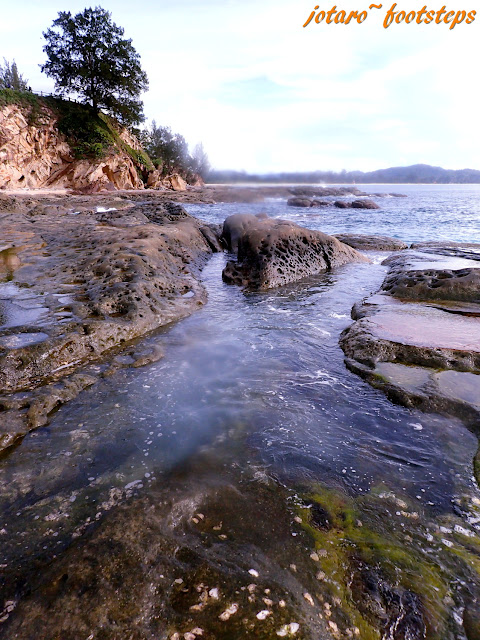 It's a serene moment exposing a contrasting tranquil beauty as the water slowly flowed in between the crevices. 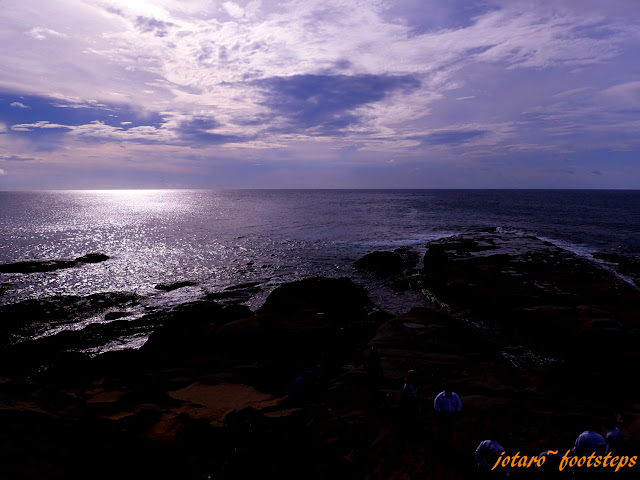 Back at the cliff, I looked back at the setting sun, a mixed surrealistic moment of sky, sea and sun. I thanked God for keeping me safe, I thanked the spirits of the place for letting me into their territory to have an experience of a lifetime.


Above is the interactive Google Street View of the Tip. 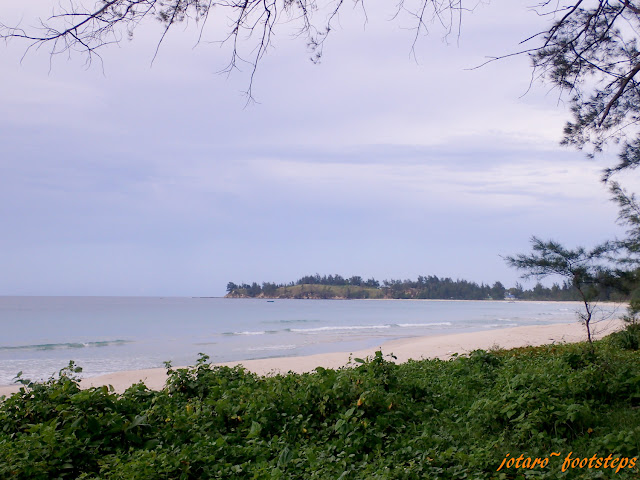 Along the Jalan Tanjung Simpang Mengayau is the sandy Kalumpunian Beach where many come to laze in the sun, swim and perhaps even snorkel. 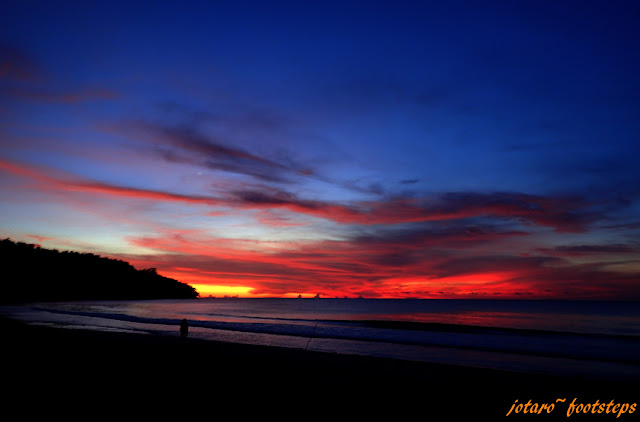 Catch a beautiful sunset here. We were lucky, on that day there was a red sunset presenting us a surrealistic picture of orang-red on a blue sky tapestry. 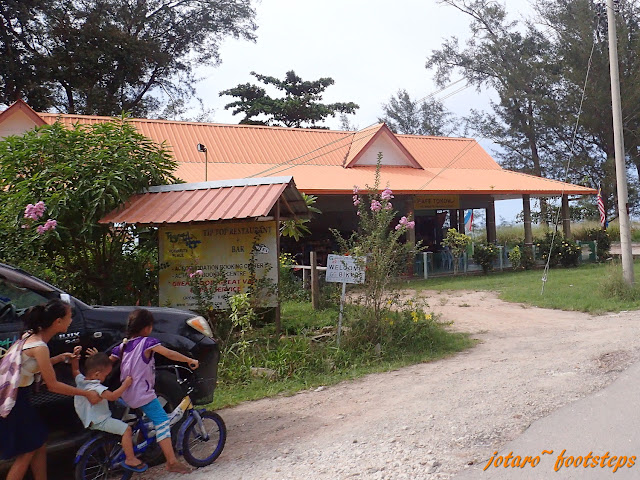 At the front end of beach is the Tip Top Restaurant that serve good seafood that includes tuna and swordfish fillet steak.
For information and accommodations at the Tip, click here.

GETTING TO THE TIP OF BORNEO 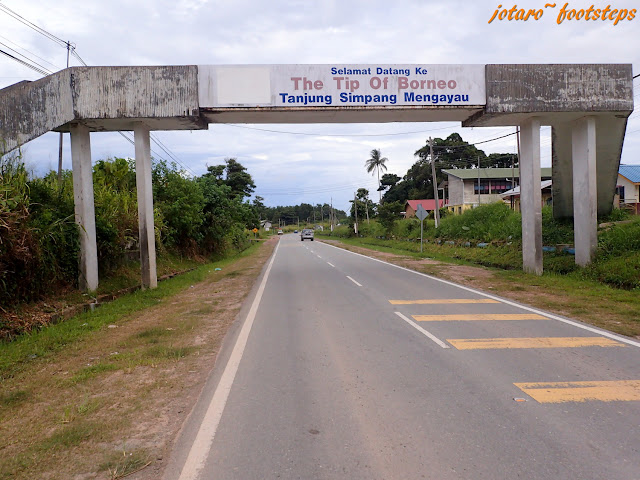 The Tip of Borneo is about 180 kilometres from Kota Kinabalu and can be reached by a 3-hour drive via the Kota Kinabalu-Kudat Road.
At Sikuati, about 20km from the Tip, a sign on a pedestrian bridge welcomes visitors to the Tip of Borneo. Follow the road until the junction at Jalan Tamalang and make a left turn, from there direction signs are aplenty to lead one through the various turnings to reach the Tip.
The official name of the Tip is Tanjung Simpang Mengayau which means in the local language "junction of the battle at the cape (tip)". 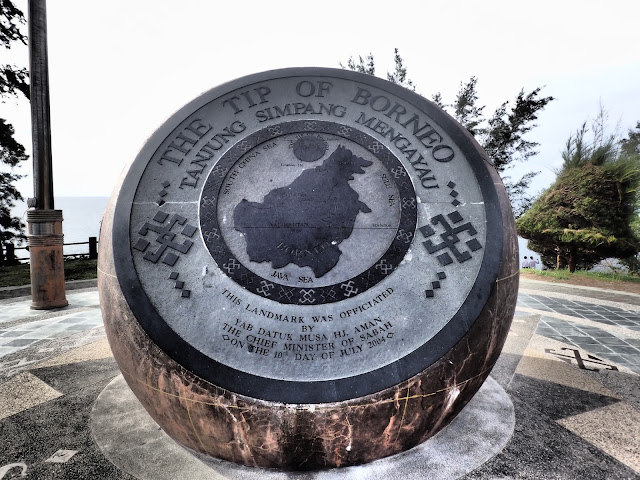 At the Tip is the ToB Park with a stone landmark in the shape of a globe. One side commemorates the opening of this park, one the other side is a map of the world indicating one's present position with a "You are here".
There is ample car-parking here and beyond this one will have to walk to get down to the Tip. 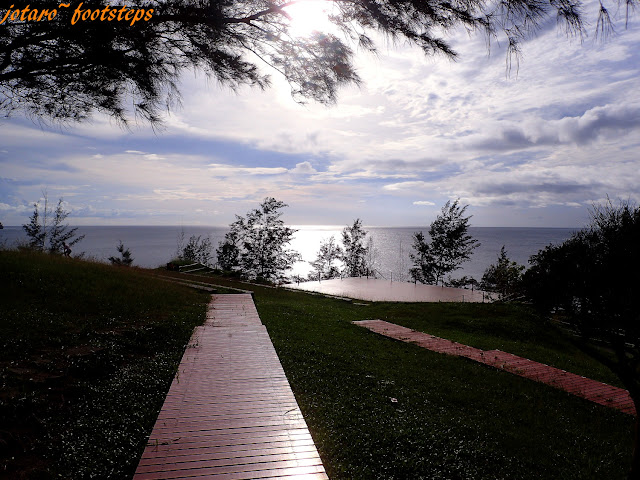 At this well landscaped park are several huts with view points overlooking there sea. There is even a performance platform with arena seating, this is where a mid-year sunset musical festival is held yearly.

You are at - Jotaro's Blog / Footsteps / Cycling Sabah 2015-Malaysia 2015-Sites  / The Tip Of Borneo
If you like this, view my other blogs at Jotaro's Blog