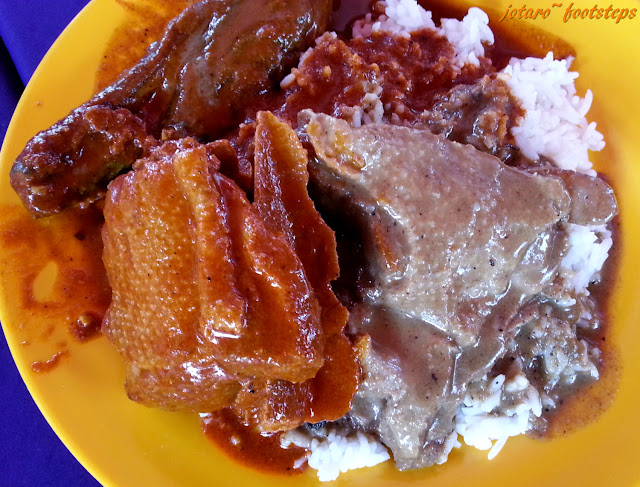 Of late I have been travelling up to Alor Setar quite frequently and a local friend always take me go try the local flavours, good food that are especially unique to Alor Setar only. We had tried the Roti Doll, nope that's not roti canai made up to look like a doll (.... see Roti Doll blog to find out more).
Recently, he took me to try another of their local delicacy, Gulai Itek!
Gulai is the frequently used term in the north for curry. So basically this is Curry Duck, which is seldom found in other parts of the country. So how does it fare? Let's find out.


I will let you in on a secret though, the place is not easy to find, it has no sign board, no banners whatsoever. Above is a photo-grab from Google street view, probably taken in the evening when the stall is closed thus the vacant look.
Look out for a blue tarpaulin shade at the road side of Jalan Perak 16 just off Jalan Gangsa, it's in front of the Chin Hin motorcycle showroom. 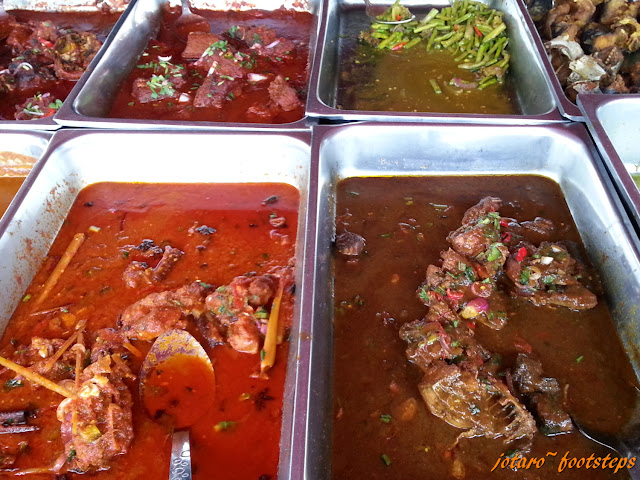 The food is served buffet style, one even scoops one's own rice.
They had a variety of dishes laid out in trays, but I was here for the duck... 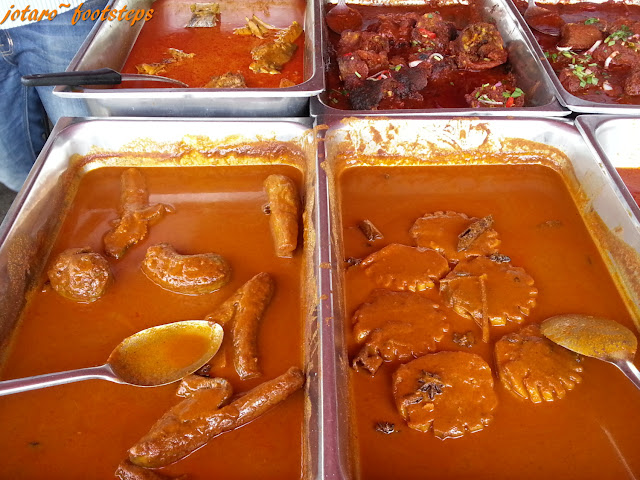 I did pick up a couple of curried brinjals form their choice of curry vegetables.
Hmmm.... the curry pineapples looks tempting.... perhaps next time. 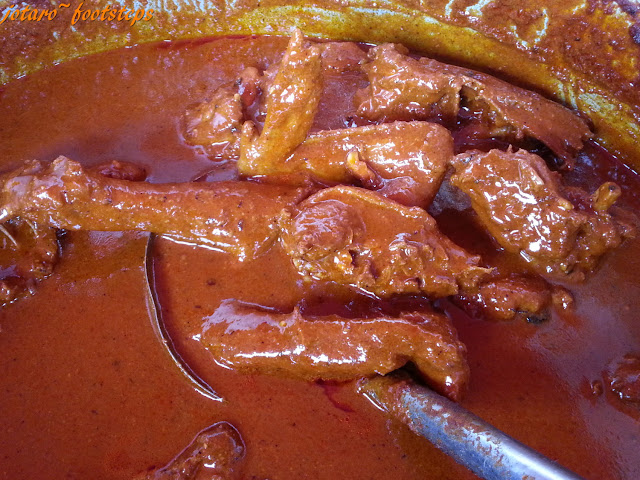 Okay, let's have a look at the Gulai Itek, there were two different type of duck curry served in two separate huge pots - a testament on how favourite this is among the locals. In one of the pots was this red curry with large cuts of ducks in it. 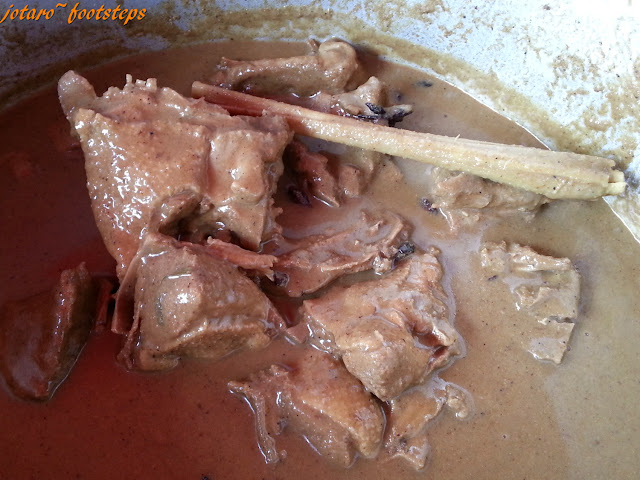 In the other port was a Korma curry, one that is less spicy hot and with that distinct korma flavour. 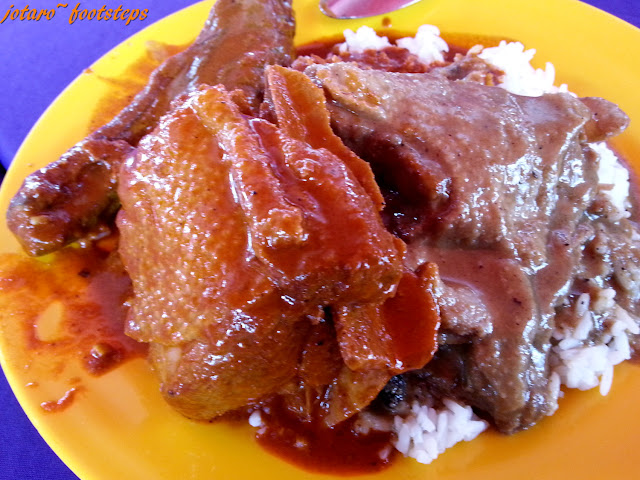 I scooped up one piece of breast meat from each pot and added them to the white rice and brinjal already on my plate; suddenly my plate looked very full; very heavy. Most patrons will either go for one or the other curry, but I wanted to try both to see how they tasted like, how good they smell too. Just doing my job as a blogger, but other patrons stared wide-eyed at me, probably thinking how greedy I am! 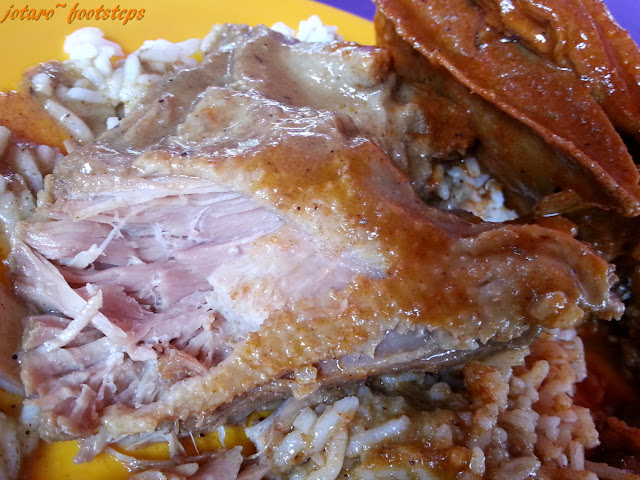 So how were the duckies? The red curry was spicy hot but not overly, it was good and could stand on its own. The korma, as expected was not so spicy hot and slightly sweeter. I liked the korma better, but then I am always partial to kormas. The duck meat was slightly tough (probably they used free-range duck, hence the tougher meat). The strong curries had masked the duck flavour, but slowly chew in and the strong smell and taste of duck slow emanates.
The brinjals were cooked whole till they were fairly soft and the curry they were in was sweet too. 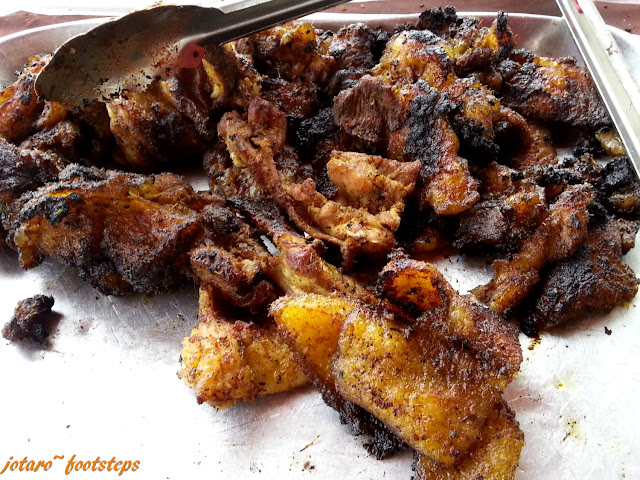 At another end of the buffet spread, were these mean looking deep-fried fatty beef, called "daging bakar". They may look mean, but I guess this must be something special as they were quickly scooped up by the locals the moment they were ready. Seeing that I already had two large chunks of duck, I refrained from getting these... perhaps next time (all the more reason to come back *grins*).


You are at - Jotaro's Blog / FootSteps / YummY! / Malay & Indian Food / Gulai Itek @ Kak Khaty Alor Setar
If you like this, view my other blogs at Jotaro's Blog
(comments most welcomed. if you like this pls share via facebook or twitter)
Posted by Jotaro Zen at 11:31 AM