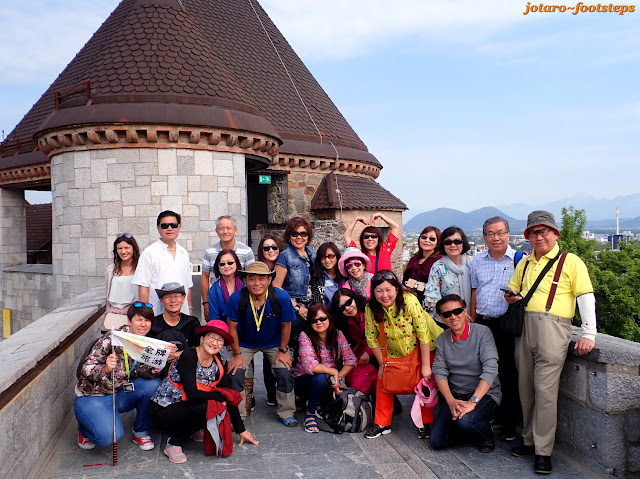 This was a guided tour led by Ace Tours, travelling from Kuala Lumpur (Malaysia) to the Balkans via Emirates Airlines to Venice with a transit at Dubai. From Venice, our coach tour started upon our landing there. Here's our itinerary & a quick summary of some of the places we visited:

Day 1: Venice>Opatija (Croatia)
Opatija (Croatia) - this seaside resort on the Kvarner Gulf is well known for its Mediterranean climate and its historic buildings along its Opatija Riviera.
Day 2: Opatija>Plitvice>Sibenski\
Plitvice Lake National Park (Croatia) - world-famous UNESCO Heritage Site #98 for its scenic blue lakes flowing down from one to another in a rush of white cascades. Overnight at Šibenski (Šibenik).
Day 3: Sibenski>Split>Dubrovnik
Split (Croatia) - UNESCO Heritage Site #97 with it's rich history and building influenced by the occupation by the Greeks and the Romans.
Day 4: Dubrovnik
Dubrovnik (Croatia) - UNESCO Heritage Site #95 with one of the world’s best preserved medieval walled cities. Also renown for being used as the setting of King's Landing in the TV series Games of Throne.
Day 5: Dubrovnik>Kotor (Montenegro)>Budva (Montenegro)
Kotor (Montenegro) - UNESCO Heritage Site #1533, it was an old Mediterranean port surrounded by fortifications built during the Venetian period. It is located on the beautiful Bay of Kotor (Boka Kotorska), a frequent present day stop-over for cruise ships. Onwards to Budva to visit Budva Old Town and appreciate the Budva Riveria.
Day 6: Budva>Mostar (Bosnia & Herzegovina)
Mostar (Bosnia and Herzegovina) - with an old town that transports us to the past, and bedded in beautiful valleys. Renown for its famous Stari Most (Old Bridge), built by the Ottoman Empire.
Day 7: Mostar>Sarajevo
Sarjevo (Bosnia and Herzegovina) - known as the European Jerusalem. A walk along Stari Grad (Sarajevo Old Town) is great experience with visits to the Ghazi Husrev-Bey’s Mosque with its clock tower, Caravanserai, Turkish Baazar, and Hamam (Turkish public baths).
Day 8: Sarajevo>Zagreb (Croatia)
Zagreb (Croatia) - the capital and the largest city of Croatia.
Day 9: Zagreb>Bled (Slovenia)>Postojna Caves (Slovenia)>Ljubjana (Slovenia)
Bled (Slovenia) - A beautiful town set along Lake Bled in the Julian Alps, with a picturesque and serene escape set amid forests and mountains.
Postojna Caves (Postojnska jama, Slovenia) - One of largest caves in Europe, over two million years old and with its forty-three miles long system of attractively lit subterranean caves. Overnight at Ljubljana (Slovenia).
Day 10: Ljubjana>Venice (Italy)
Ljubljana (Slovenia) - the capital of Slovenia with Ljubljana old town squeezed between the castle hill and Ljubljanica River (Ljubljanica) famed for its Dragon Bridge (Zmajski Most) which is guarded by four detailed dragon statues. Followed by a funicular train ride up to Ljubjana Castle where the tower has magnificent views all over the city.
Venice Mainland (Italy) - some shopping at the Designer Outlet Noventa di Piave with outlets selling world famous brands. Overnight at Venice mainland. 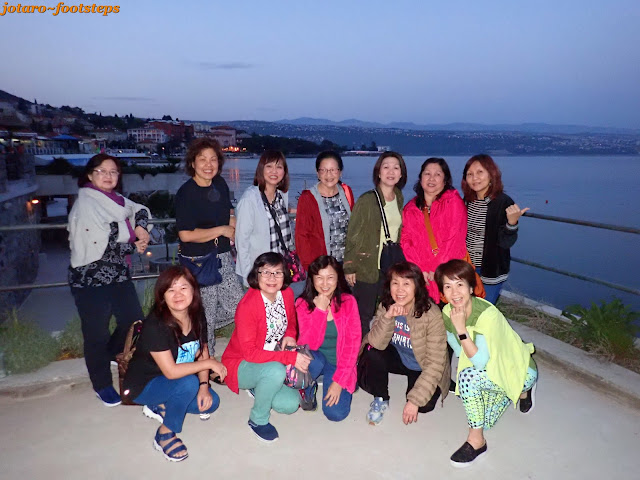 The Balkans of which many of heard of but does not know that well, conjures of images of mysterious countries set at the North-Eastern Mediterranean, of places with names that was difficult to pronounce but which later turned out to be as interesting and as beautiful as their names. With these images we set forth to get to know the Balkans and it's people better and came back with wonderful memories. Our Balkan adventure starts late the previous night when we gathered at the Kuala Lumpur International Airport (KLIA) to meet Tim, our guide from ACE Tours & Travels. At 1:55 am we flew off via Emirates and headed for Venice (Italy) with a 4-hours transit stop in Dubai. At Venice we were met by Lamija (our main local tour guide who would accompany us for the duration of our tour).
This first day was more on travelling, Thirteen hours flight, four hours transit and a six hours coach journey from Venice and crossing into Croatia to the Opatija Riviera which lies on the beautiful coast of the Adriatic Sea. By the time we reached Opatija it was 6:30pm (local time) and we had traveled a total of 23 hours. Despite the long travel time, we enjoyed the scenery along the way as the bus wended through the coastline and hills of the Adriatic Sea. After a quick check in and dinner at the our hotel (the Hotel Astoria) we went for a short evening walk along the coast.
(Click here for FB photo-story link) 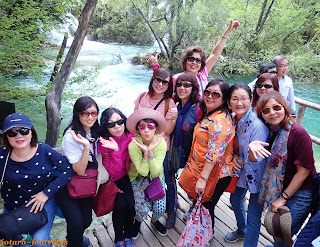 After yesterday's whiff of Adriatic Sea sceneries, today brought us to places in Croatia which enchanted us even more with our journey taking us inland to a UNESCO Heritage listed beautiful lake with unique cascades, and then back to the coast to listen to a sea organ before ending the day at Hotel Panorama in Sibenski (Šibenik).
Places of Interests:
- Plitvice Lakes National Park (Nacionalni park Plitvička jezera).
- Nehaj Fortress (Tvrđava Nehaj).
- The lake district of Lika-Senj County (Ličko-senjska županija).
- Zadar (Zâdar).
- The Zadar Sea Organ (Morske orgulje).
- Zadar Cathedral (Cathedral of St. Anastasia) (Katedrala sv. Stošije).
- Church of St. Donatus (Crkva Sv. Donata).
- Sibenski Bridge (Šibenski most).

Some renown travel sites we visited, with some listed under the UNESCO Heritage Site List:

FOOD
The food we ate, with some that are the speciality of the respective countries.

ART
Europe is renown for it's art, we did visit some museums and art gallery that displayed famous art pieces by the great masters.

1. STAYING CONNECTED & IN TOUCH.
We mulled over whether to get pre-paid mobile sim cards; we were travelling in five countries (i.e. Croatia, Montenegro, Bosnia and Herzegovina, Slovenia, & Italy; with transit stops in Dubai) We considered two options, using pre-paid sim cards from one of the European mobile operators or using a pocket WiFi with consideration that both options have to cover the countries we were visiting.
We opted for the pocket WiFi, getting several units to share between sub-groups of us. Here're the list of options:


b. Pocket WiFi
We used the GlocalMe U2 pocket WiFi from Roaming Man Global Package which can serve up to five users at a cost of MYR36 per day for twelve days (to include our transit time in Dubai) totalling MYR 432 or MYR86-40 per user for the duration. Signal strength and speed were good at most of the cities but were low or slow at remote hilly areas.
The advantage is the we could collect it at Kuala Lumpur International Airport (their stall is at Level five opposite McDonald's) and one would be confident of physically having it when leaving Malaysia. The disadvantage - it had a limited range of ten meters; meaning that if any of the other users stray beyond this distance from the person carrying it, they will lose wifi capability. Calls can be made via apps such as WhatsApp or Windows Messenger.
b. Prepaid Sim Cards
Plans for these usually includes call time, sms, data over a specific period of time. Short of getting individual prepaid sim cards for each of the country, one can get the prepaid sim from UK mobile provider Three under the All-in-One #15 deal for only £15. This plan lasts for 30 days and allows for 5GB Data, 3,000 minutes of call time & 3,000 text messages within the system. If you are a low or high data user, there are other plans. More importantly it has their "Feel At Home" which allow the phone's data, call and messaging allowance to be used in sixty countires (mostly European and also Singapore) without any extra charges! This prepaid sim can be ordered online and delivered within three to five working days (allow more time for out of UK orders) and usage time commence from activation date. Unfortunately, so far they do not cover Montenegro  & Bosnia and Herzegovina.
Other prepaid sim options are from:
- Simoptions.
- Simcardglobal.
- One Simcard, and many more.
Do check on the cost of their plans, coverage and delivery charges before ordering.
The advantage of the pre-paid sim card is that each traveller can stay connected individually. The disadvantage is that it may turn out costly if the travel group is larger, so one could consider the following option then.

2. NAVIGATING AROUND.
Google Maps came in handy here as it was usable in the countries we visited. Just open the app and type in the destination, select the mode of transportation (i.e. walking or by public transportation which is either subway, trams, trains, buses etc.). The app will then come out with options for the travel route indicating the name of embarking station, destination stations and the distances to walk to and from each station. It even indicate the number of stops in between; clicking on the number of stops will give an expanded view of the names of each stop.
It's best to use this app just as you are leaving for your destination, as it will then give the best travel option, which station and platform to use, time of train or buses, final destination of the train/bus routes. In busy stations, the travel options changes by the minute.
There are options to select from if one just want to travel by bus or tram or rail, etc. Do experiment with the app to get familiar with it. Note that Google Maps may not function this way in some countries or cities; so prior experimenting with it will tell.

3. DON'T GET LOST & STAY SAFE
Group tours often have free time for individuals to explore the places visited. Although it is fun to explore the quieter lanes and alleys, try not to get lost by remembering landmarks. Be back at the appointed time and place of re-grouping (this especially apply to jolly ol' me who tend to stray and take many photos) so as not to delay the group; this is especially important if a boat or train ride is involved as the next ride may be a while later.

At spots be careful of your money, passports and bags; pickpockets could be lurking by. Above all keep your passport safe and don't loose it as many of the countries visited may not have your countries embassies. Losing your passport will mean cutting your tour short to get some replacement travel documents at a country with a respective embassy.

4. CURRENCIES
In Croatia & Bosnia and Herzegovina, the acceptance of the Euro is the exception rather than the rule. Change only your estimated spending at these countries from the Euro to the local currency; should you have any significant balance don't change back to the Euro yet, change from one respective currency to the next so as not to lose out on exchange commission.
In Croatia, the currency is Croatian kuna (symbol KN). For Bosnia it is the Bosnia and Herzegovina convertible mark (symbol KM). At Dubai International airport the Euro and US Dollar are accepted.

You are at - Jotaro's Blog / Footsteps / Europe 2018: 10 Days Balkans Tour
If you like this, view my other blogs at Jotaro's Blog
(comments most welcomed below. if you like this pls share via Facebook or Twitte
Posted by Jotaro Zen at 4:57 AM