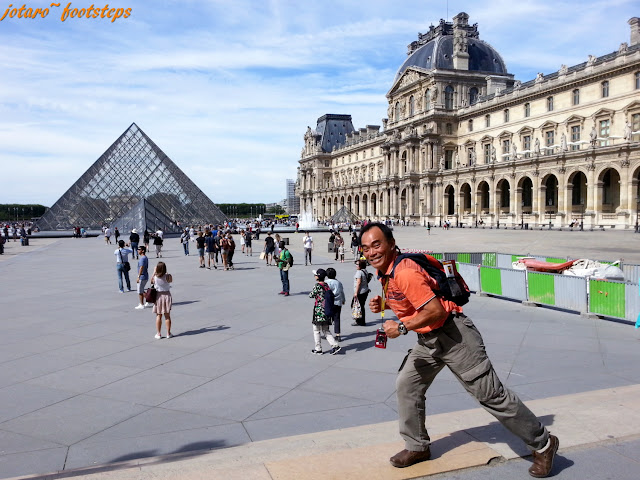 10th September 2016 - Paris
It's our second day in Paris, we won't be here long, so what better way to get to know the city better than a trip on the HopOn-HopOff (Ho-Ho) bus. And one can just get off at any of the interesting stops and later Hop On again 😊. 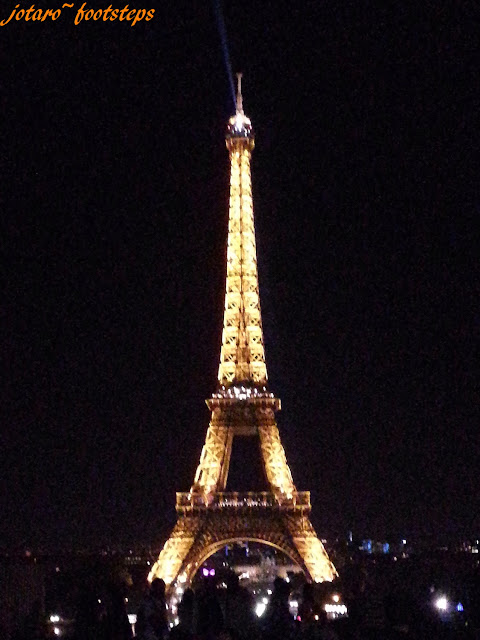 The previous day we had arrived at Paris from London and had toured the Montmarte District, learning about its artsy history. Later we had a cool river cruise along the Seine River, caught a good view of the Eiffel Tower too.
Today we will be getting to know the city better.

Tour map of Paris - above is a map showing locations of the various places of interests we visited or passed by via the Ho-Ho bus. 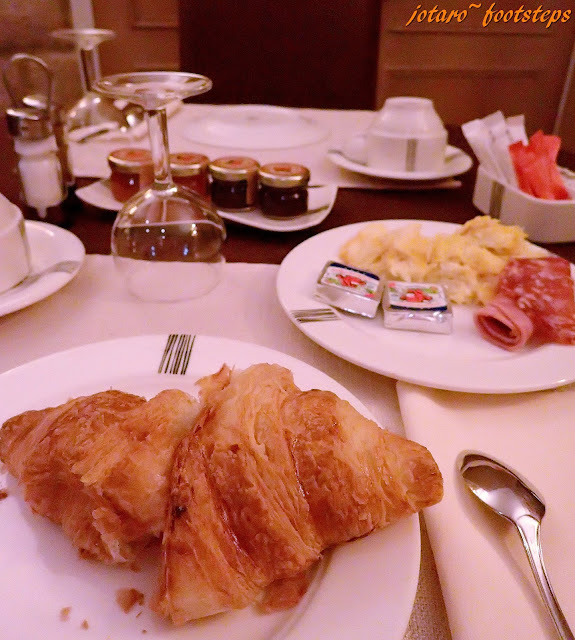 We woke up feeling energized. Our room wasn't that big, but it was cosy and the window opened out not to a spectacular view but faced the wall of an adjacent building. But we did not mind, the Parisian atmosphere was there - feeling us with an ambience of love and warmth.
Our hotel breakfast was very good, with some meat cuts and one of the best croissants we ever had, one with a thin crispy skin on the outside and a warmly fluffy inside. These went very well with the fruit jams that came in cute little bottles. 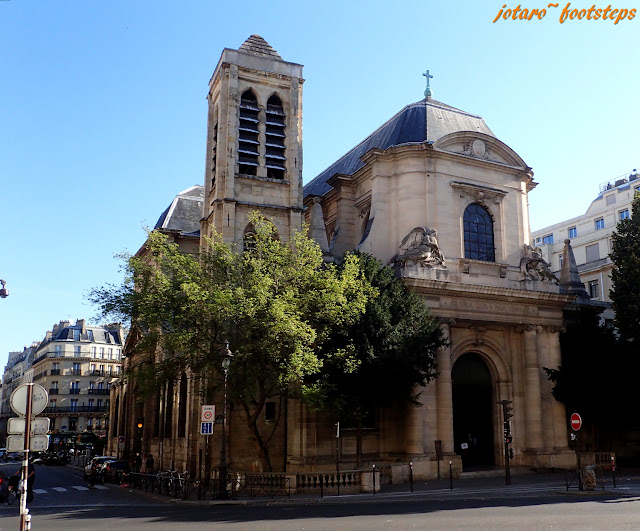 We set off taking a slow walk down the street, nearby was the Saint-Nicolas du Chardonnet, which with it's somewhat run-down state added a mysterious air to the neighbourhood. This Catholic church built in the thirteenth century does indeed have a colourful past, presently it is the de facto national centre of the Society of Saint Pius X. 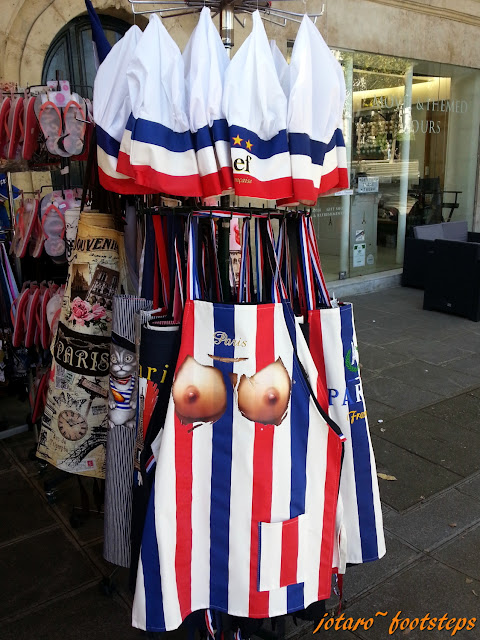 Round the corner, the circurmstances turned to a cheeky one - aprons in French tri-colours with photos of bare breast printed onto them... naughty... Naughty! 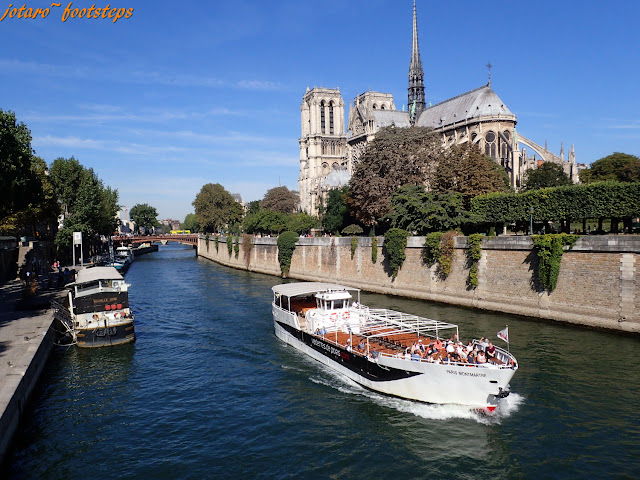 Our hotel is strategically located, just five minutes down the road we cross the Seine onto Île de la Cité, one of two remaining islands in the river within the city of Paris. We had thought we had an early start, but other tourists were already on the tour boats sailing along the Seine. On the other side is the Notre-Dame de Paris, standing tall with its easily recognisable spire and twin towers. 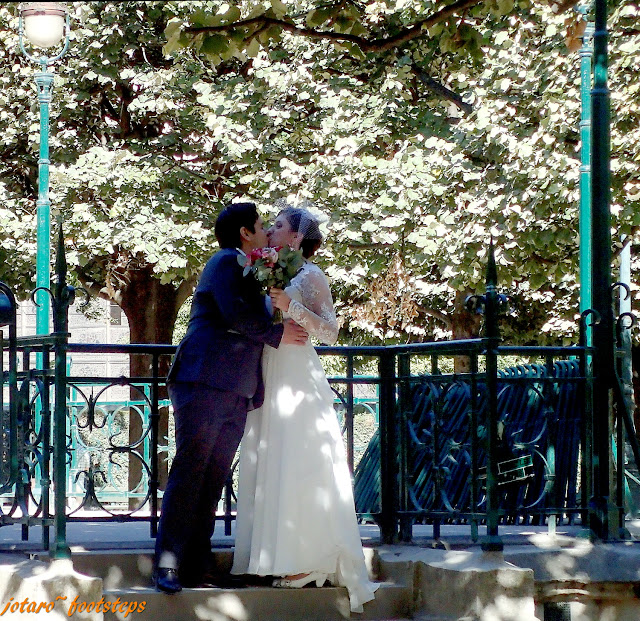 Even here, the air of romance is around. At a pavilion it the garden, a couple was having their wedding photos taken, the groom lovingly kissing the bride. A beautiful photo that they will definitely treasure... no photo-bombing here by cheeky old me!

Just across the street we did our first Hop-on to the Big Bus HopOn-HopOff tour of Paris, at stop #6-Notre Dame of their Red Route, which took us on a 2-1/2 tour to some of the more renown places of interest of Paris. Here's a quick run-down: 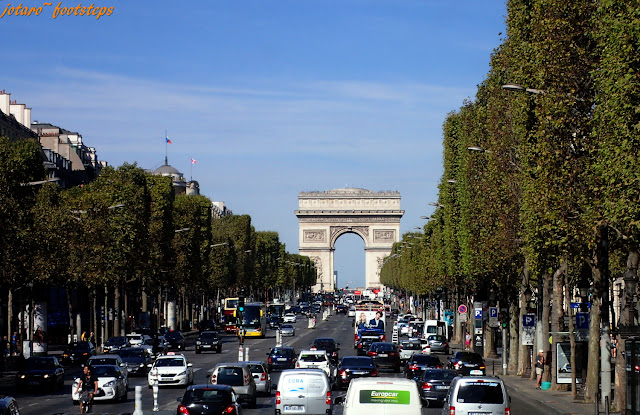 Down the tree-lined Champs-Élysées, this boulevard was heavy with the morning rush traffic, but the sight of the Arc de Triomphe ahead had our hearts beating. Get your cameras ready! 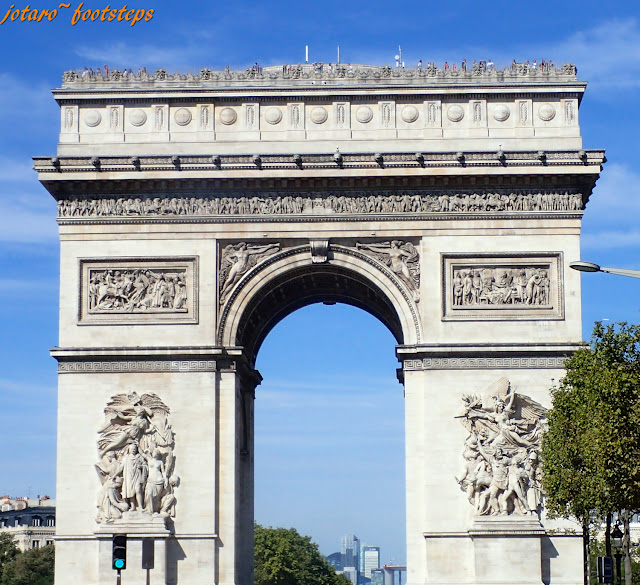 And here's the Arc de Triomphe ..... snap.... snap... snap!
The Arc de Triomphe honours those who fought and died for France in the French Revolutionary and Napoleonic Wars, with the names of all French victories and generals inscribed on its inner and outer surfaces. Beneath its vault lies the Tomb of the Unknown Soldier from World War I. 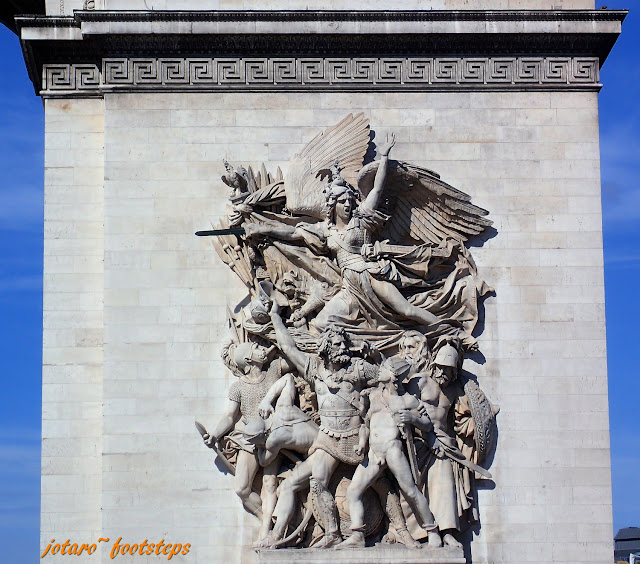 On each outer facing face of the huge legs of the arch are panel relief carvings, the one above depicts Marseillais volunteers departing for the revolution, it signifies La Marseillaise, the national anthem of France.
No worries if you did not manage to get a good photo of the arch, the bus turns around a the roundabout in front and comes back to the arch.
Snap..... snap..... SNAP! 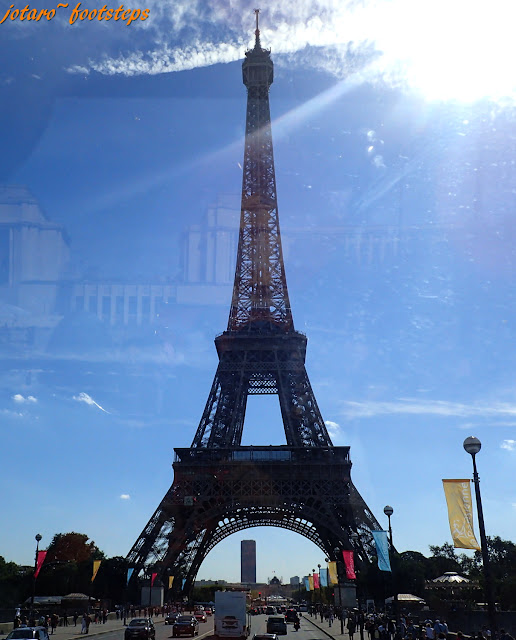 An icon not to be missed, the Eiffel Tower; the bus drove ride under it. Up close it was as we admired the way the steel members come together in a beautiful lattice; just imagine that it was erected more than a century ago in 1889. Construction took two years, then it was a marvel of engineering soaring skywards to be the tallest structure in the world. It did not receive the glamour that it has now, in fact many was against it's design, calling it a monstrosity when compared to other fine architecture of France's Golden Age. Now it is the most recognisable building of the country and is often used to represent the country in posters, etc. 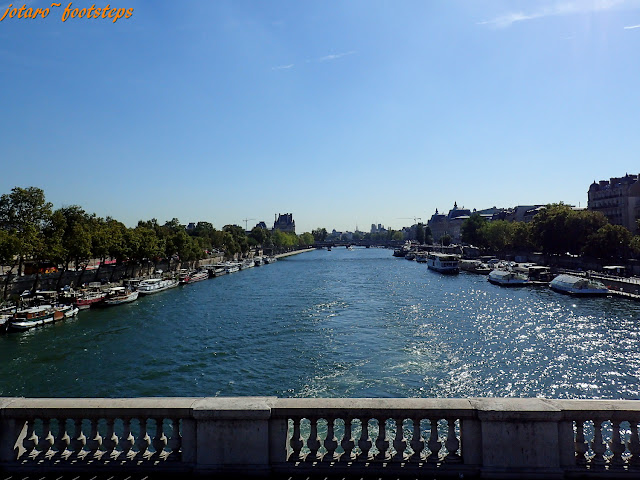 We crossed over the Seine along the Pont d'lena Bridge, it's waters were a sparkling deep blue in the morning. We crossed over to the Palais de Chaillot and then turned around and crossed the bridge again...

I was wondering why we were crossing the river that often, until we reached Champ de Mars. It is one of the largest/longest green space in the city with an added bonus of having a majestic view of the Eiffel Tower. In the morning the sun shines against the tower and it's just picture perfect standing tall against a blue-blue sky.
SNAP! 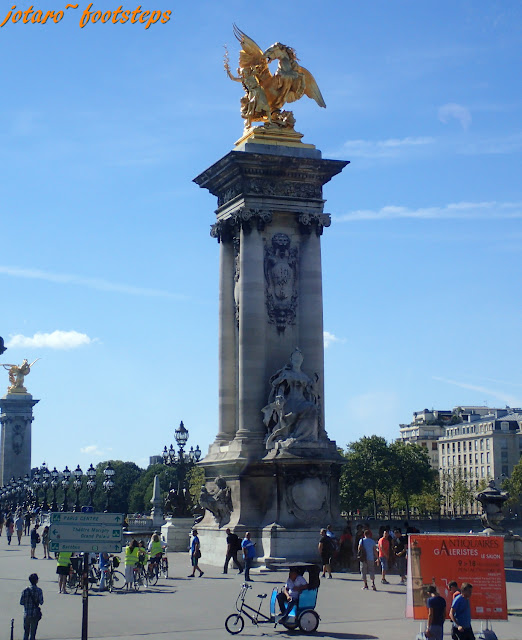 Further on we crossed another bridge, this one is a beautiful one - the Pont Alexandre III Bridge. On each of the four corners of the bridge huge columns stand, with statues at their bases and goldend ones atop. The ones at the top are statues of the Fames in gilted gold, this one shown in the photo is called the Renommée des Sciences ("Fame of the Sciences") with a golden Pegasus. 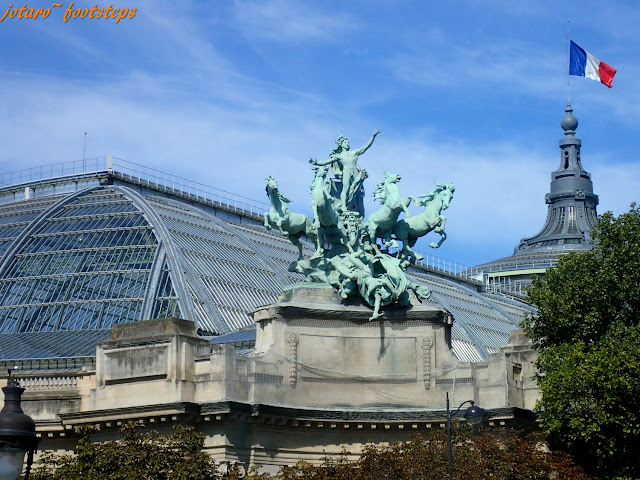 A swing by the Grand Palais with a patina copper statue of "Harmony Triumphing Over Discord" standing magnificently in front of it's glass roof. This is an exhibition hall built 1897 as part of the preparation works for the Universal Exposition of 1900. 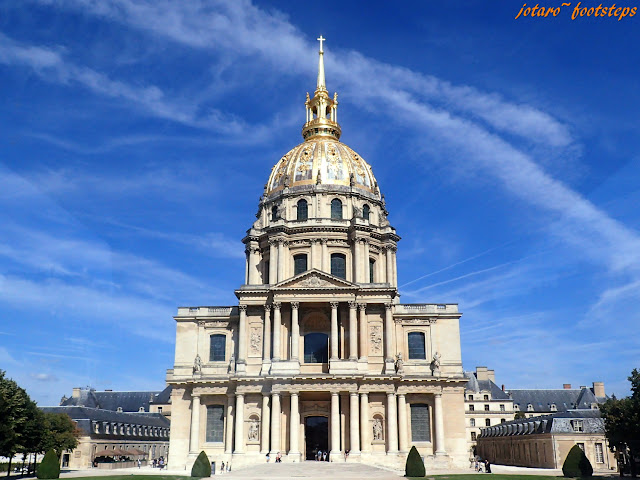 The Museum of Contemporary History, I like it's unique golden dome topped with a  spire. This Musée d'Histoire Contemporaine contains about 1,500,000 items and documents from 1870 to the present day, covering major themes of French or international history. 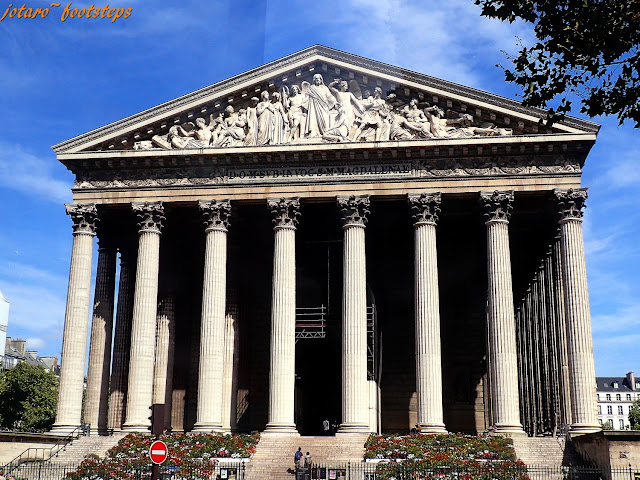 Next was the Palais Bourbon, which houses the French National Assembly. There seems to be some Grecian-Roman influence in its architecture. 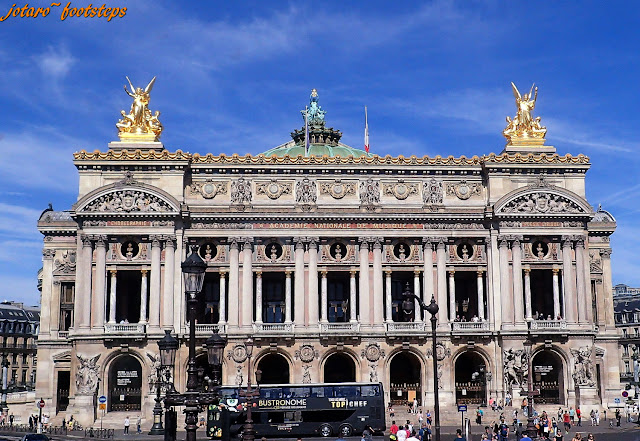 The bus approached the Palais Garnier and made a looped.
It is where the Paris Opera presently performs many of it's ballet performances. 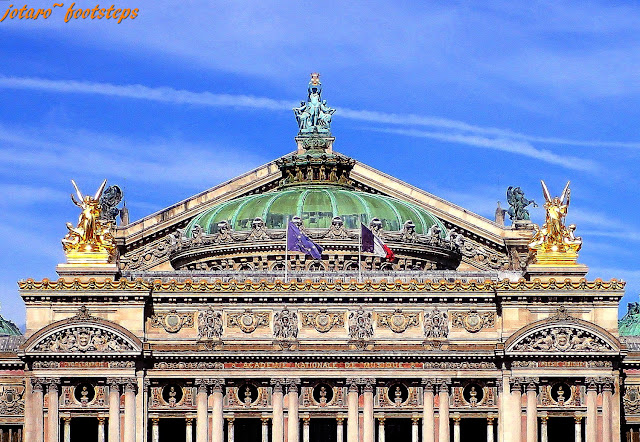 The beautiful crown-like green dome sits at the centre of its roof, flanked by two golden Pegasuses 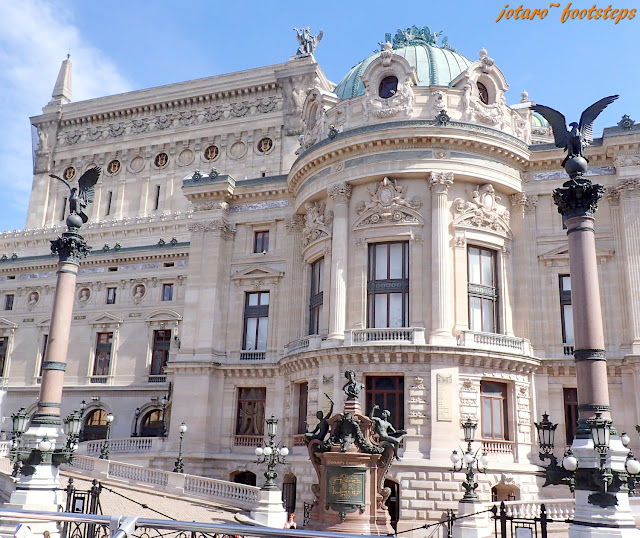 The rear of the building. 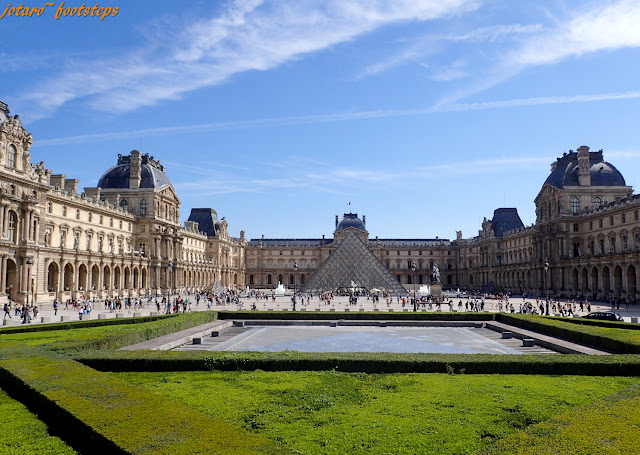 We approached the Louvre via the Tuileries Garden, it's bright green lawn and hedges contrasting agains the brown of the old building. 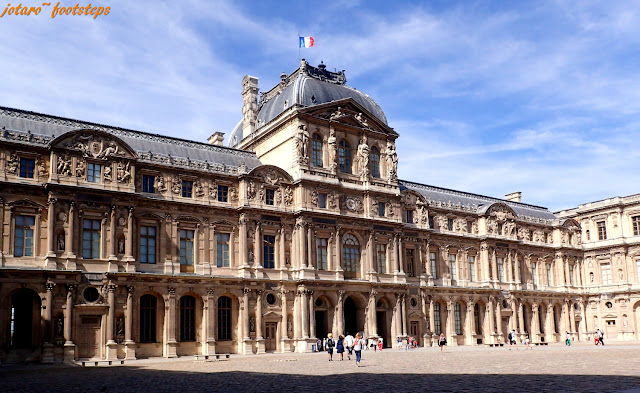 The Louvre Museum is the largest museum in the world. It is housed in the Louvre Palace, originally built as a fortress in the late 12th century under Philip II. 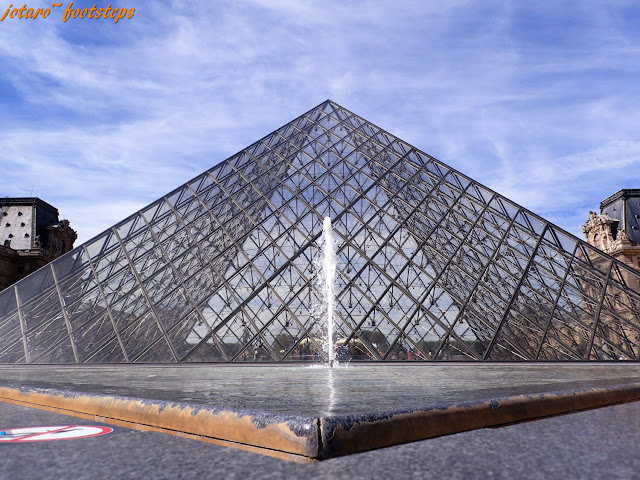 Standing at the courtyard is the Louvre Pyramid (Pyramide du Louvre), it's modern starkness contrasting against the much older architecture of the surrounding buildings. Completed in 1989, it is a large glass and metal pyramid designed by Chinese-American architect I.M. Pei, The large pyramid serves as the main entrance to the Louvre Museum. 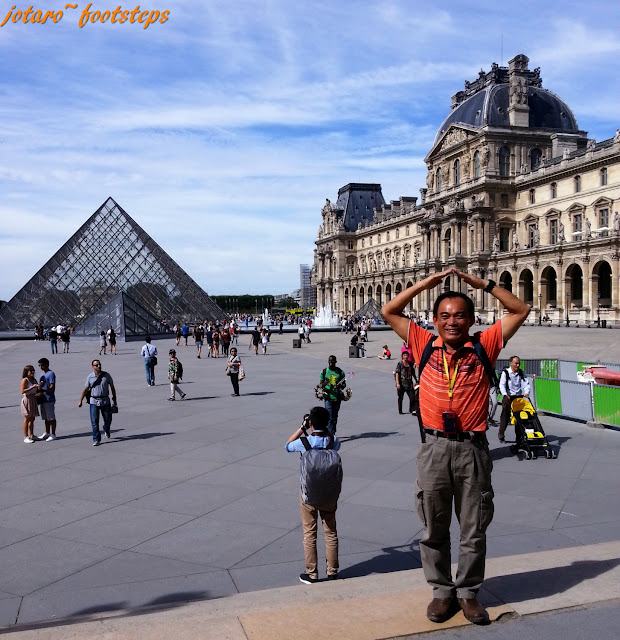 This is where we hopped off, to take some photos for keepsakes. Hah! My hands pyramid is not as sharp as the Louvre Pyramid. 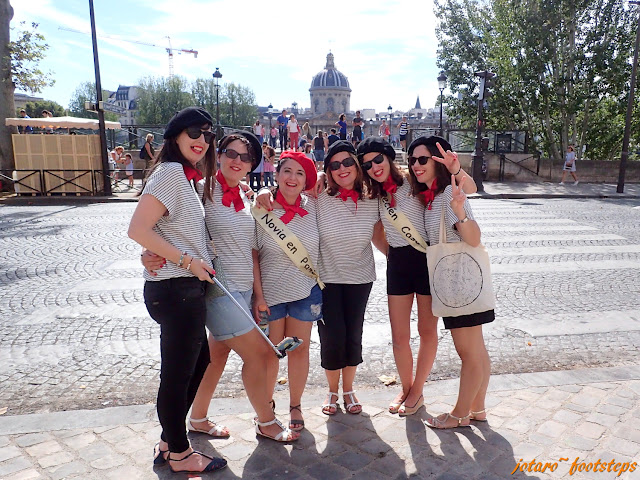 Our next destination was the Musée d'Orsay; it was quite a walk away, fortunately we met this group of cheery tourists to liven our stroll in this hot afternoon. 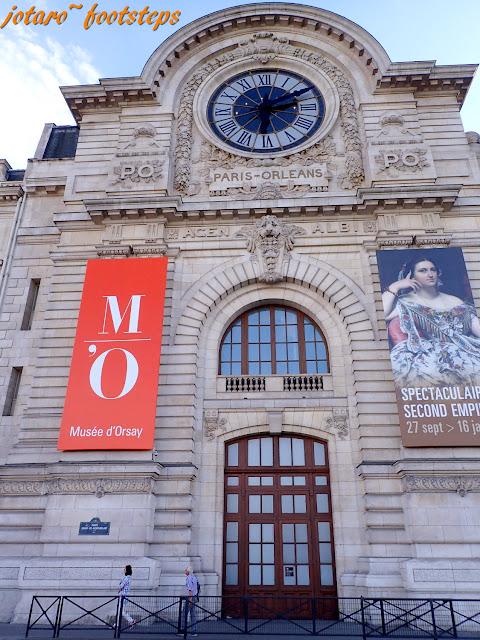 The Musée d'Orsay is housed in the former Gare d'Orsay, a Beaux-Arts railway station built between 1898 and 1900. We reached the front of the building, a tower with a large clock resplendent of many old railway stations; there was a large door there but it was locked.
Hah! The entrance to this museum was not here but at the back..... more walking around the perimeter of this huge building! 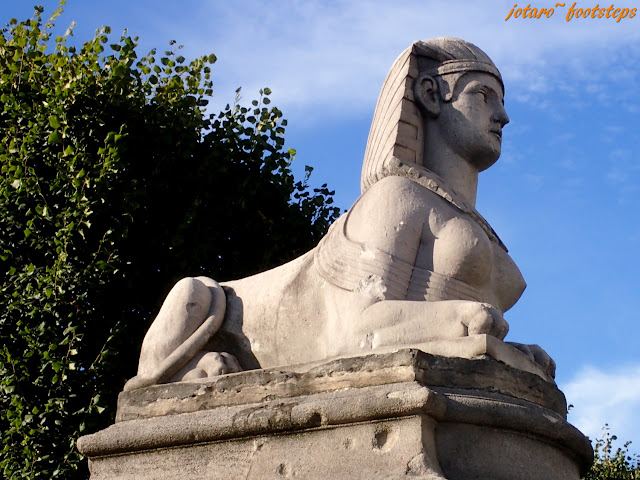 If you see this bare-breasted female Sphinx, then that is where the entrance to the Musée d'Orsay is. There were long queues of people lining up to get entrance tickets; lucky us, we had booked on line with a "jump the queue" option, there was another much shorter queue for this.
I always wonder why the Medieval Europeans are enchanted by these female sphinx, I have seen them at several important places, even in Budapest, at the front of the Hungarian State Opera House. 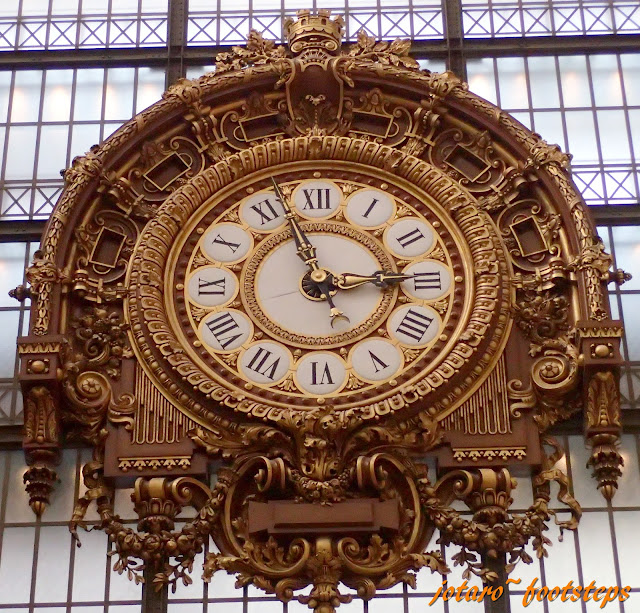 Just as we entered, we were greeted by another huge clock, this one very well crafted with nice carvings and was from the original train station.
But don't be mesmerised by this clock or by the many beautiful art pieces on display at the ground floor.

Don't make the same mistake like I did and while away the time at the lower floors; instead go up to the fifth floor frist; that's where the jewel of this museum is, it's where the art by many renown Impressionist artists are on display.
In fact, the three hours I spent at the museum was not adequate, as they are thousands of art pieces on display, and I missed out the whole of the first floor! Spend at least half a day there.
(.... read more of the Musée d'Orsay) 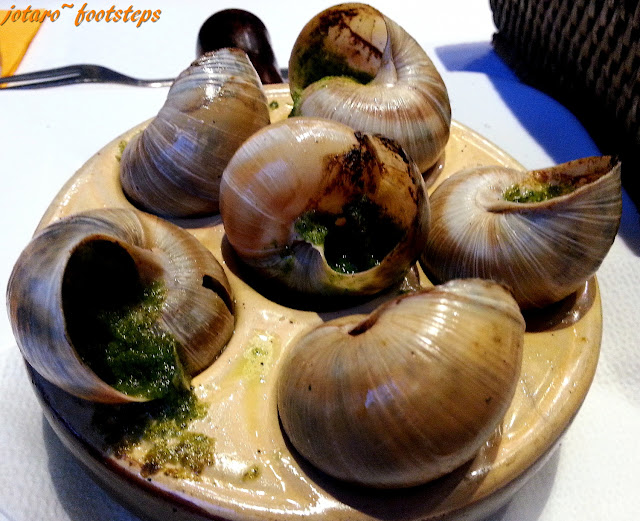 Our busy day and walk around the musuem had left us famished, but we decided to stay starved for a little while longer, and instead took the Métro back to Montmarte; to the Le Relais Gascon, a restaurant recommended by the walking tour leader of the previous day.
Here we had a delicious dinner starting with these esgarot which were served with parsley butter sauce instead of the usual garlic butter. 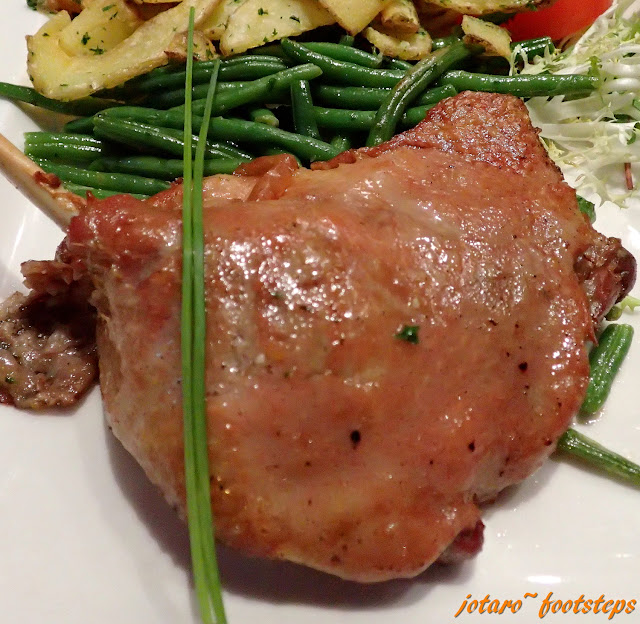 The main was this seducive Confit De Canard, i.e. Duck Confit. The portion was an upper thigh; it had been cooked and preserved with its own fat. The cooking was done well with the skin just adequately burn to a light brown. This dish was so deliciously memorable that I have been looking out for something similar since I returned home....