The Rijksmuseum was founded in The Hague in 1800 and moved to Amsterdam in 1808, where it was first located in the Royal Palace. The current main building was designed by Pierre Cuypers and first opened its doors in 1885. It is one of the most visited museum in the Netherlands and with record numbers of 2.2 million and 2.47 million visitors. It is also the largest art museum in the country. I was most fortunate to visit it while on a tour of Europe.
These here are artwork from the second  floor galleries.
These are the photos taken of the artwork at the museum; for presentation purposes and due to photography angle, many of these have been cropped and edited to compensate for low lighting. It is better to visit the museum as nothing beats seeing the originals.

For better navigation and orientation of the Rijksmuseum, below is the Second Floor layout plan:

Below are the artwork, for an enlarged view click on the respective photo; most of these works did not have any attribution to the artists who made them. Enjoy! 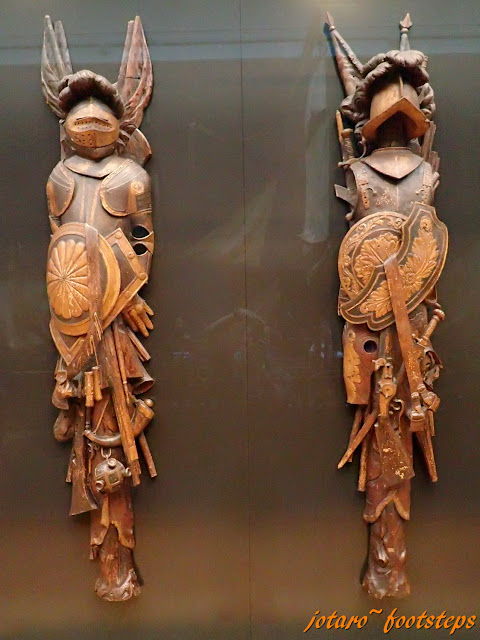 Two carved timber martial trophies. These represent the weaponry of a calvaryman and an infrantryman in the Dutch Army - from the Midieval Netherlands (c.1665). 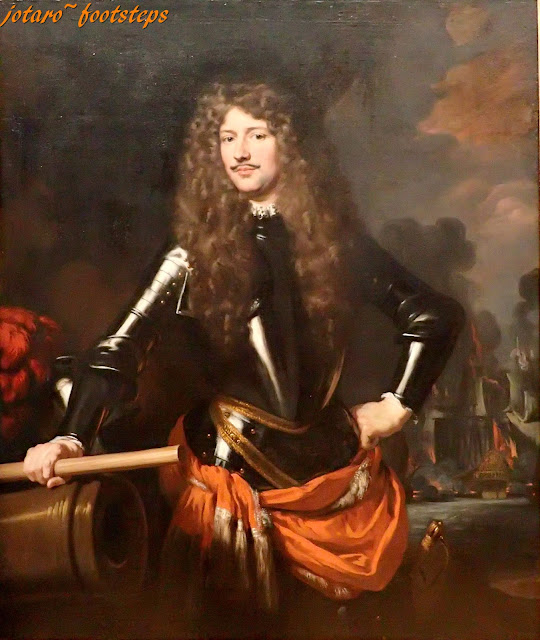 A medieval Dutch naval officer, in the background a naval battle is ongoing. 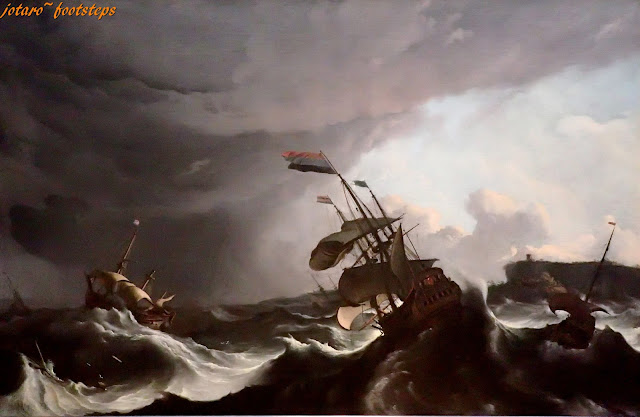 "Warships in a Heavy Storm"
In early 1694, some 30 Dutch warships set sail for the Mediterranean. They were sent to protect a merchant fleet from French attacks. In the Straits of Gibraltar they ran into a heavy storm. Several ships sank or were seriously damaged, including the Hollandia, portrayed centre right in the painting  - oil on canvas painting by Ludolf Bakhuysen (c.1695). 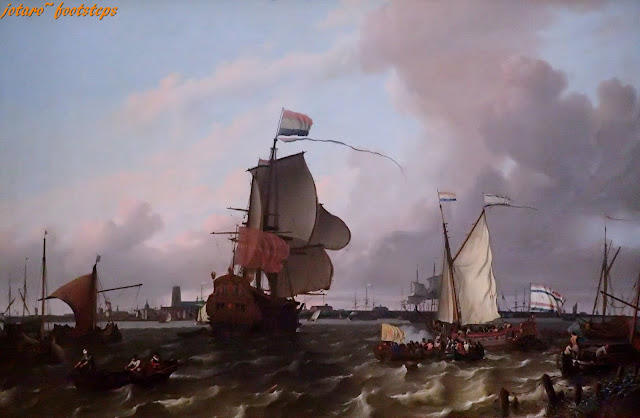 "The Man-of-War Brielle on the River Maas off Rotterdam"
In 1668, the Brielle carried Prince William III to England to drive away the Catholic King James II from power and to safeguard the Protestant faith. In 1689, William III and Mary II were crowned king and queen regnant of England. - oil on canvas painting by Ludolf Bakhuysen (c.1689). 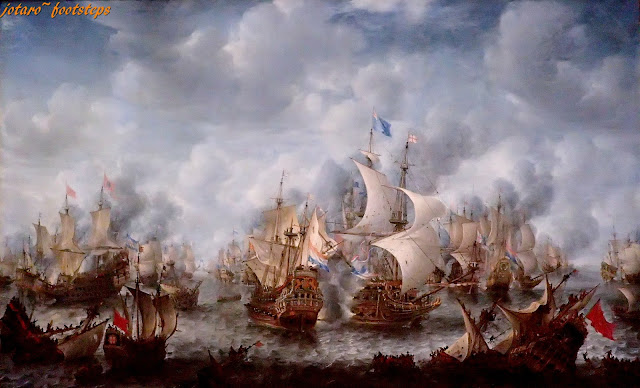 This painting represents the Battle of Terheide (Battle of Scheveningen) on 10 August 1653. In the centre is the largest vessel in the Dutch Fleet, the Brederode, commanded by Admiral Maerten Harpertsz Tromp. The Dutch Republic won the battle but lost its commander Tromp who was fatally wounded. - oil on canvas painting by Jan Abrahamsz Beerstraaten (c.1665-1666). 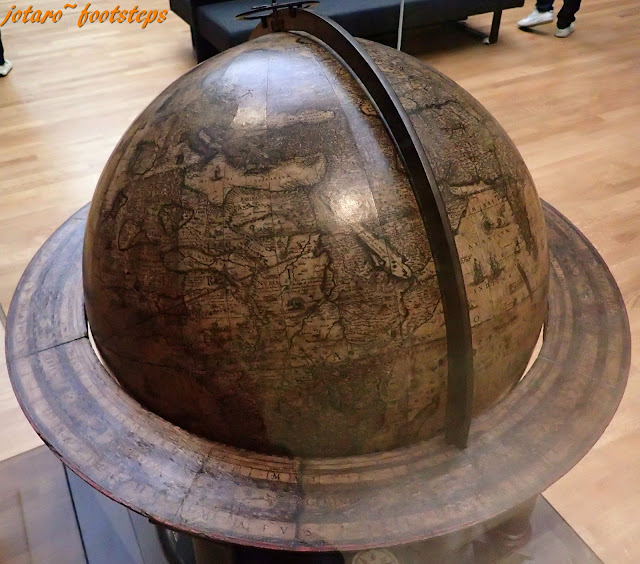 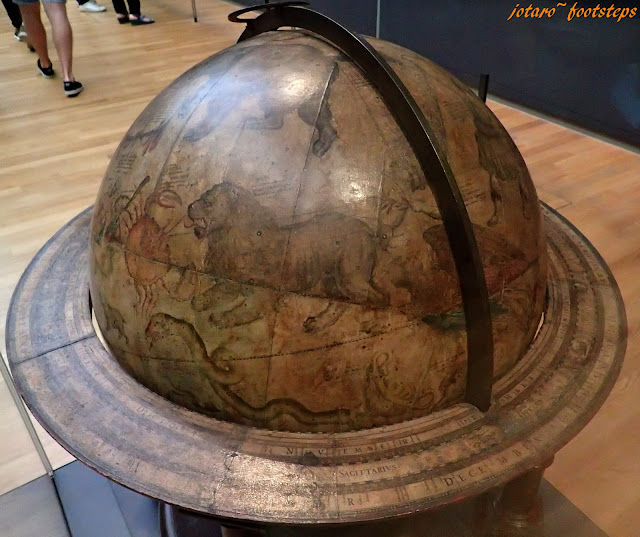 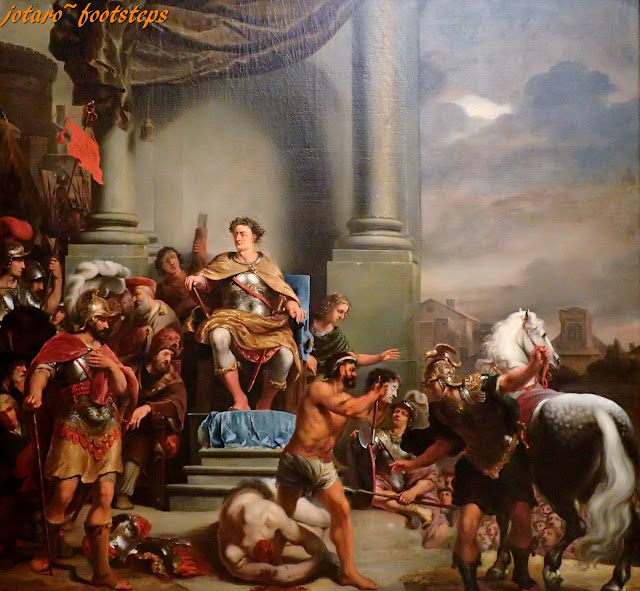 "Consul Titus Manlius Torquatus Orders the Behading of his Son"
This picture was painted for the headquarters of the Admiralty of Amsterdam. It represents a story from Roman times in which a consul condemns his son to be beheaded for ignoring a command. The Admiralty intended this image to proclaim that insubordination would be severely punished. It also reminded officers that they must always remain impartial
- oil on canvas painting by Ferdinand Bol (c.1661-1664). 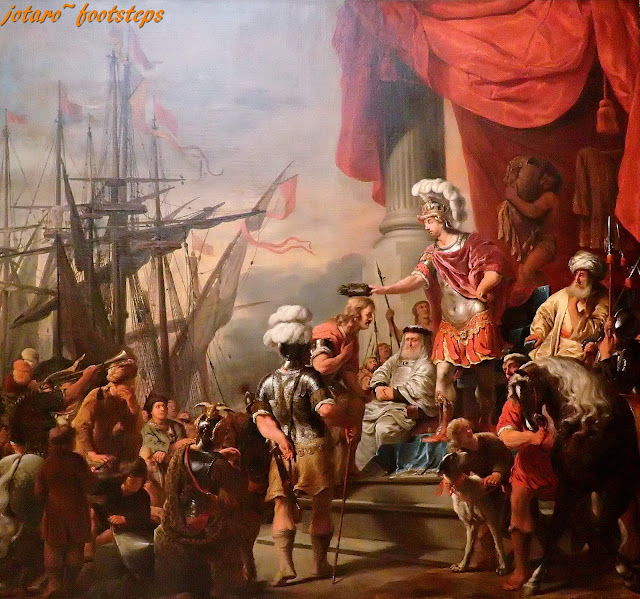 "Aeneas at the Court of Latinus"
Bol’s painting, made for the Amsterdam Admiralty, shows a scene from Virgil’s poem Aeneid. Aeneas congratulates one of four ships’ captains who competed in a race. All four were rewarded on their return, even the captain who threw his helmsman overboard for disobeying an order. The painting was accompanied by a poem by Joost van den Vondel, stressing the importance of firmness and generosity in good government.
- oil on canvas painting by Ferdinand Bol (c.1661-1664). 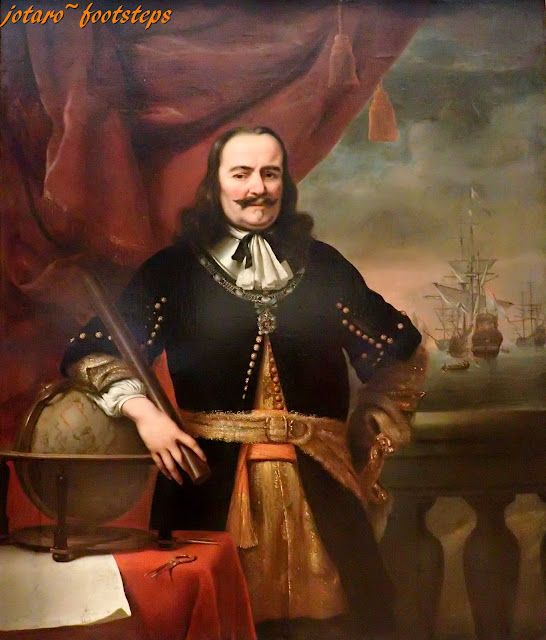 "Michiel de Ruyter as Lieutenant-Admiral"
In 1667 Ferdinand Bol painted several life-size portraits of Michiel de Ruyter. These were hung in the headquarters of all five Dutch admiralties. This painting went to Middelburg. De Ruyter’s hero status made him a powerful man. In the portrait he is richly dressed and holding his commander’s baton. Around his neck he is wearing the Order of St Michael, awarded to him by the King of France.
- oil on canvas painting by Ferdinand Bol (c.1661-1664). 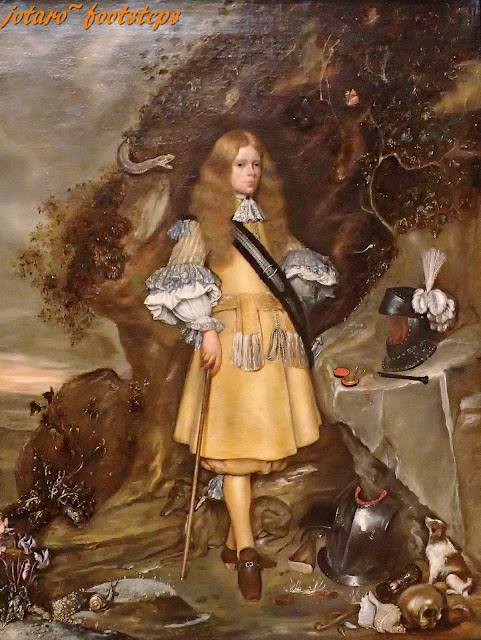 "Memorial Portrait of Moses ter Borch"
The two painters produced this portrait to commemorate their youngest brother, Moses, who was born in 1645. Moses died in 1667 during the storming of Fort Languard near Felixstowe in England. He had served in the Dutch navy against the English since 1664. In the painting Moses is surrounded by symbols that allude to his military life: time (the pocket watch), death (the skull), eternity (the ivy on the rocks) and loyalty (the dogs).
- oil on canvas painting by Gerard ter Borch & Gesina ter Borch (c.1667-1669). 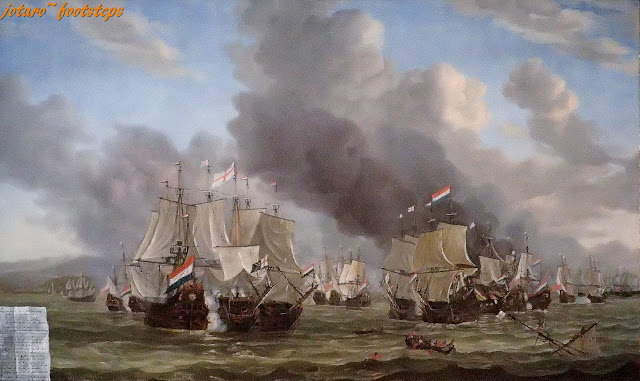 "The Battle of Livorno"
The battle between the Dutch and English fleets off the Italian port of Livorno (Leghorn). Victory brought the Dutch control over trade in the Mediterranean.
- oil on canvas painting by Reinier Nooms (1653-1664). 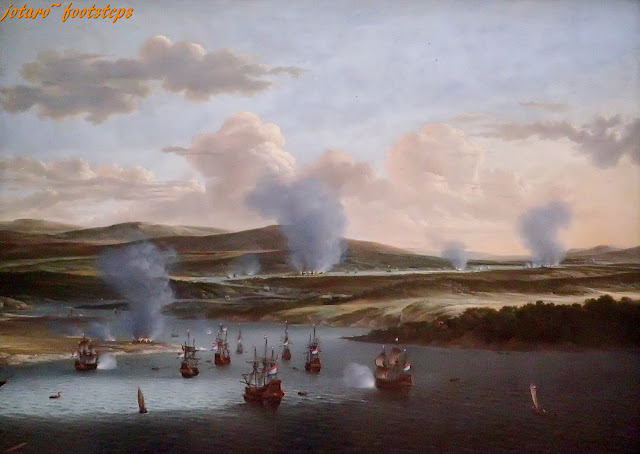 "Attack on Chatham"
In June 1667, a naval fleet commandeered by Michiel de Ruyter surprised the at anchor off Chatham on the River Medway. In the foreground the fort of Sheerness is going up in flames, while further upriver columns of smoke rise from various English ships st alit by Dutch forces.
- oil on canvas painting by Willem Schellinks (c.1668). 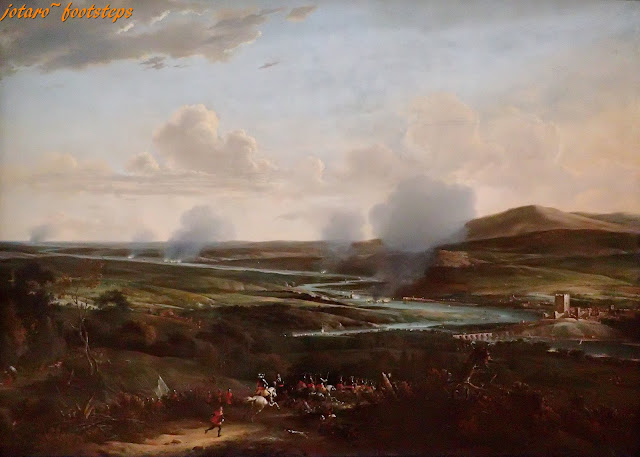 "Attack on Chatham"
In June 1667 English troops assembled at the town of Rochester on the River Medway, after news reached London that a Dutch fleet commanded by Michiel de Ruyter was heading towards the naval dockyards at Chatham. There was little, howerver, that they could do. Down river several English ships are on fire. De Ruyter took the English flagship the HMS Royal Charles back to the Netherlands as war booty.
- oil on canvas painting by Willem Schellinks (c.1668). 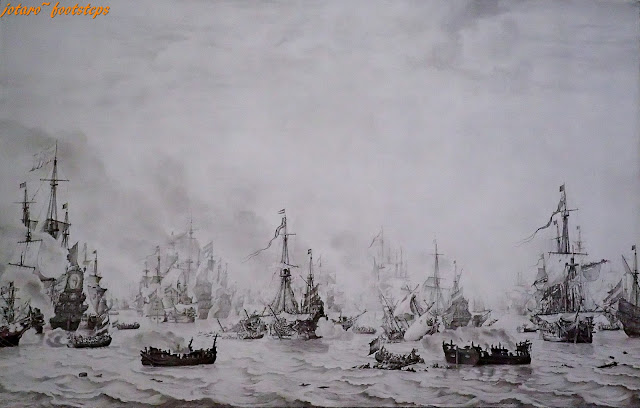 "The Battle of the Downs"
In 1639 the Spanish attempted to transport troops and supplies to Flanders with a large fleet. The Spanish Armada was intercepted in the English Channel by Maerten Harpertsz Tromp, who commanded a much smaller force. His spectacular victory and his capture of the Santa Teresa – the large Spanish warship burning on the left – established the Dutch fleet’s formidable reputation.
- ink on canvas painting by Willem van de Velde the Elder (1659). 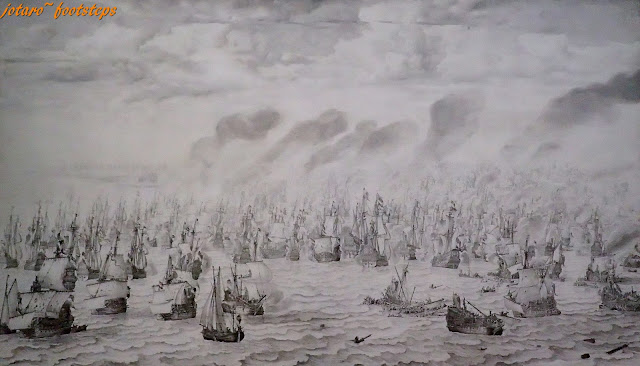 "The Battle of Terheide"
To commemorate the Dutch naval commander Maerten Harpertsz Tromp, his family commissioned a series of pen paintings of Tromp’s best-known battles from Willem van de Velde. The artist used pen and ink on canvas for these works, which resemble meticulous, accurate engravings. Van de Velde witnessed the Battle of Terheide (Battle of Scheveningen) in 1653. He used the sketches that he produced on board as studies for this pen painting.
- ink on canvas painting by Willem van de Velde the Elder (1657). 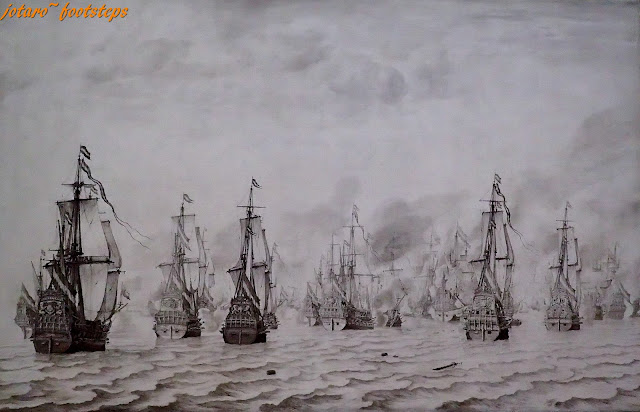 "The Battle of Dunkirk"
In 1639 Maerten Harpertsz Tromp prevented the Spanish fleet from leaving the harbour at Dunkirk with a blockade of twelve ships. Van de Velde has depicted most of the Dutch vessels with their prows pointing towards the enemy armada. With a remarkable eye for detail, he rendered in pen the ships’ counters or transoms – the stern carvings from which the individual vessels can be identified.
- ink on canvas painting by Willem van de Velde the Elder (1659). 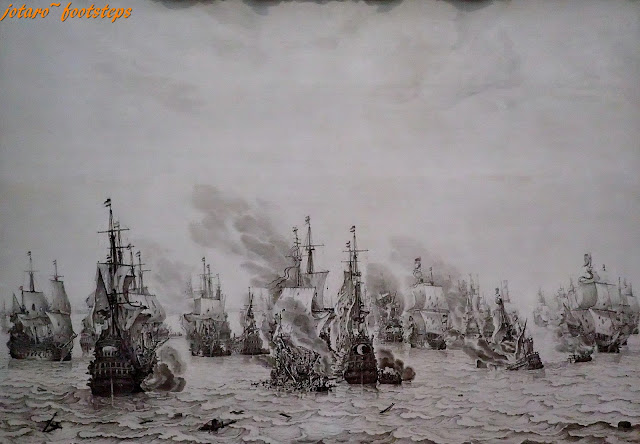 "Battle Of Livorno (Leghorn)"
In 1653 the English ship the Samson went up in flames off the coast of Italy after an encounter with Cornelis Tromp's warship the Halve Maen. Van de Velde represented both vessels at the centre of this pen painting. Tromp commissioned the picture to honour and glorify himself.
- ink on canvas painting by Willem van de Velde the Elder (c.1659). 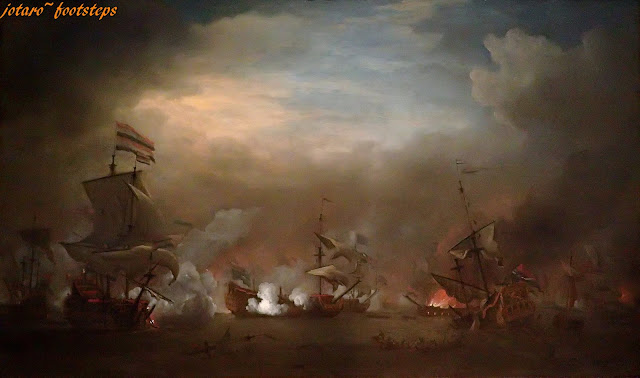 "Encounter During The Battle of Kijkduin"
This painting is traditionally called the Nocturnal Battle. However, the naval Battle at Kijkduin (Texel), between Cornelis Tromp on the Gouden Leeuw and Sir Edward Spragg on the Royal Prince, actually took place in daylight hours on 21 August 1673. It looks like night only because the encounter is shown partially hidden behind clouds of smoke and gunpowder fumes. While the Dutch flagship is sinking at the right, Tromp battles on from a captured ship.
- oil on canvas painting by Willem van de Velde the Younger (c.1675). 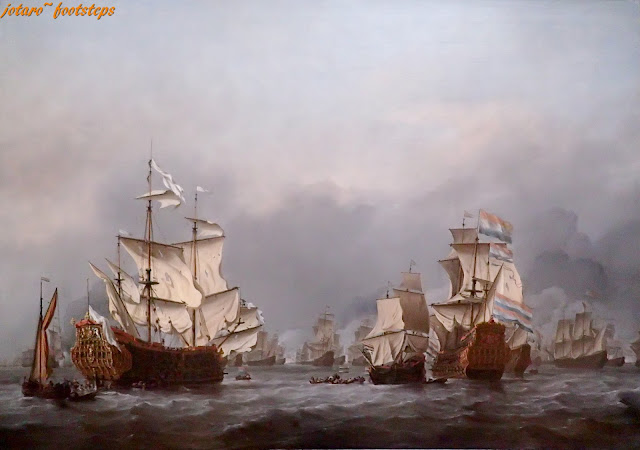 "The Surrender of the Royal Prince"
In June 1666, the Dutch and English fleets fought a ferocious battle on the southern North Sea. With an eye for detail and a sense of drama, Willem van de Velde portrayed the moment when the English flagship Royal Prince (at left) ran aground on a sandbank and was taken by the Dutch. To signal their surrender, the English crew hauled down their flags.
- oil on canvas painting by Willem van de Velde the Younger (c.1670-1675). 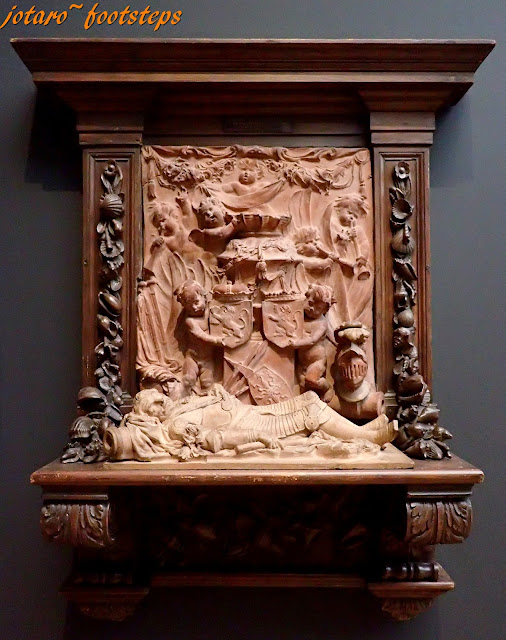 Model for the tomb of Maerten Harpertsz Tromp
In his design for the tomb of Maerten Harpertsz Tromp, Rombout Verhulst chose to represent the naval hero wearing his armour, his head resting on a cannon, with the medal he was once awarded in one hand, his commander’s baton in the other. The admiral was killed on 3 August 1653 off the cost of South Holland by English cannon fire. His real tomb is made of marble and stands in the Oude Kerk in Delft.
- terracotta & oak carving by Rombout Verhulst (c.1670-1675). 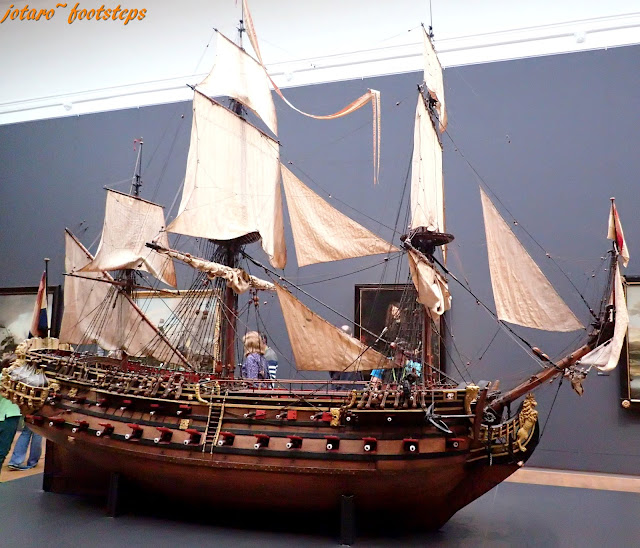 Model of Dutch warship, the William Rex.
This model shows the appearance of a Dutch warship in the late 17th century. It was made at the dockyards of Vlissingen (Flushing), where real warships were also built. These would have been more than twelve times larger than this model. This ship has 74 guns. The model was displayed in the council chamber of the Admiralty of Zeeland in Middelburg.
- h 410cm × l 452cm × w 205cm replica model made of wood, brass, iron, glass, rope, textile and paint, by Adriaen de Vriend & Cornelis Moesman (1698). 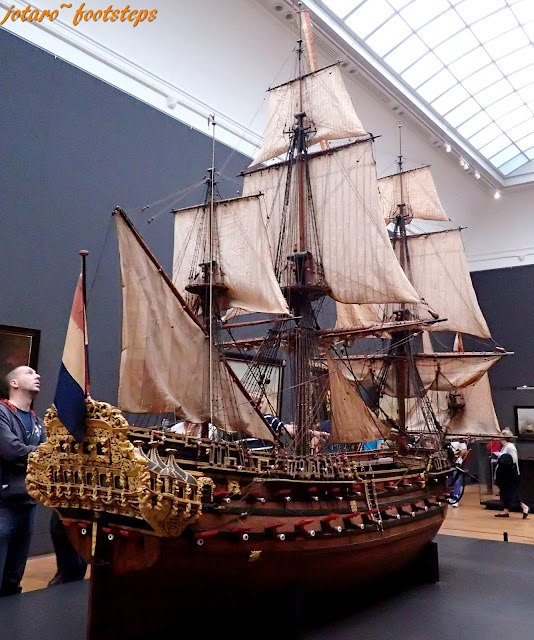 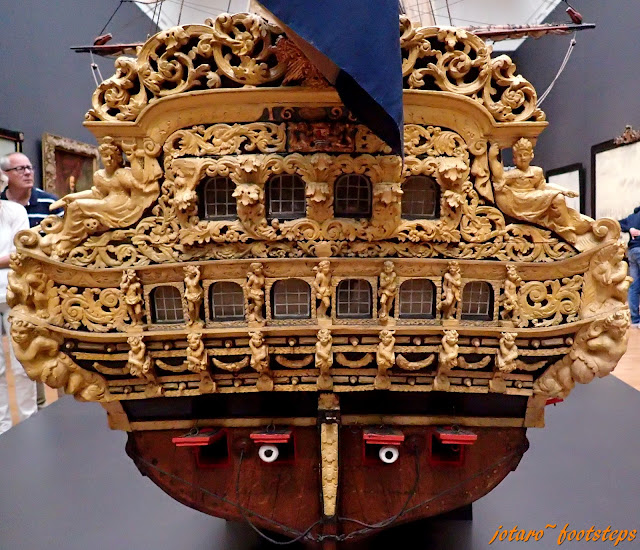 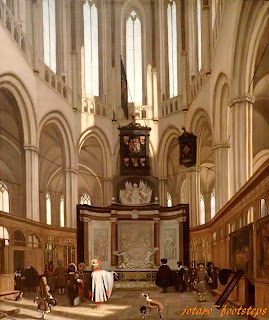 "The Tomb of Michiel de Ruyter in the Nieuwe Kerk, Amsterdam"
Visitors are admiring Admiral Michiel de Ruyter’s imposing tomb monument. It occupies the place where the main altar once stood when the Nieuwe Kerk was still a Catholic church. The monumental marble tomb is a tribute to the naval hero, who died in 1667 off the coast of Sicily at the age of 69. It was designed by the sculptor Rombout Verhulst. De Ruyter’s son commissioned this painting.
- oil on canvas painting by Emanuel de Witte (1683). 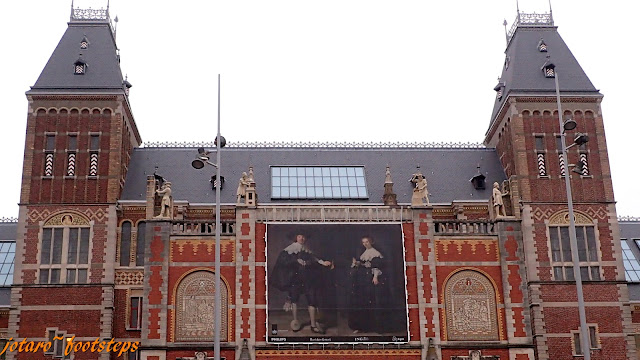