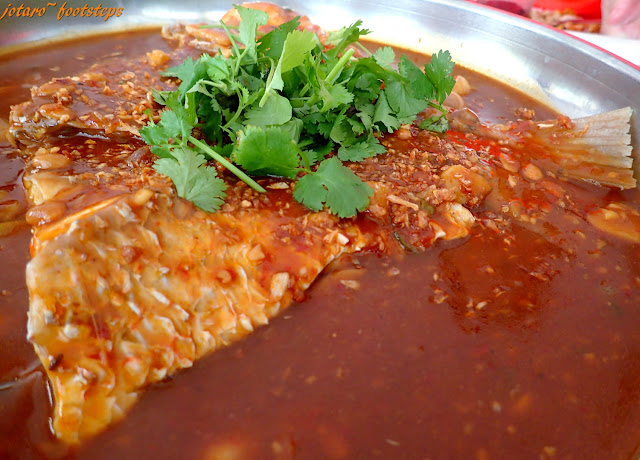 Sungai Besar, Selangor, Malaysia - July 2016
Often our gang go to Sekinchan for some cycling fun, to tour the beach, the padi fields and the many cottage industries there (like the Prawn Cracker and Yong Tau Foo factories). Of course, Sekinchan is also well known for it's many seafood eateries, but these days the town and its restaurants are overly crowded during the weekends; and when this happens, prices go up and somehow the quality of food is compromised. So we usually go slightly further to Sungai Besar where there is good and cheaper food to be found. Previously we had tried Xin Hai San Restaurant, a homely place in the older quarter of the town that serves good home-style cooking, so for this round we decided to try something different - to try a proper restaurant; this time round we headed for Restoran Chong Tai. 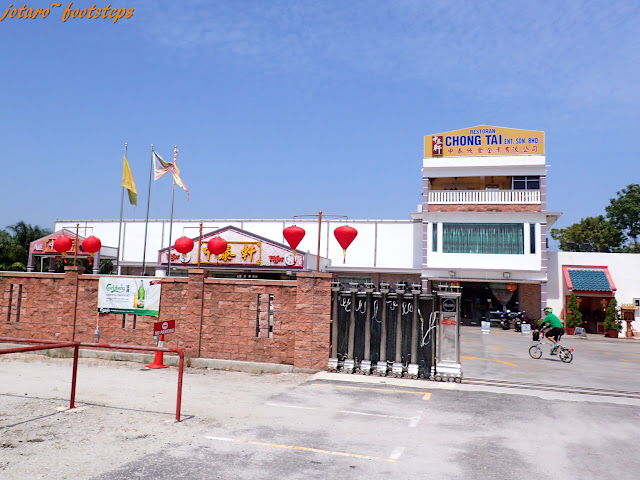 Chong Tai is a fairly large restaurant, and oddly it is situated out of nowhere at Kampung Sungai Limau on the outskirts of Sungai Besar. So it's food must be pretty good for it to be large and in the middle of nowhere. In the front compound is a large car-park. Chong Tai  is also called Chong Thai, quite misleading as I had thought it was a Thai restaurant. It does serve some Thai-style dishes though.
Outside of the compound walls, there is an even larger gravel-paved car-park; business must be good, and I gather they also cater for bus-loads of tourist crowd. 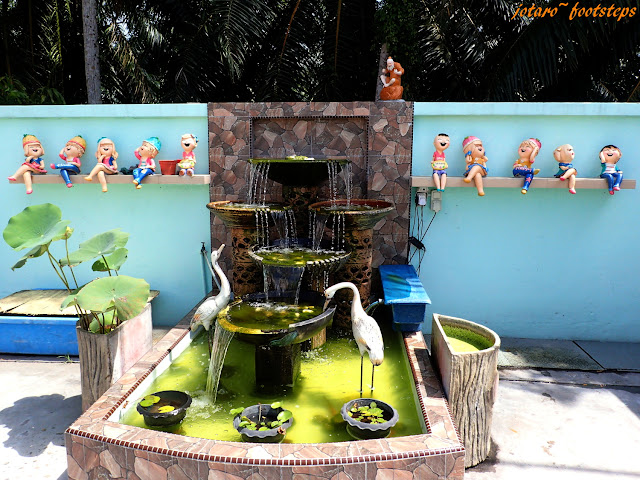 Another oddity, the toilets are situated within the compound making me suspect that the walled compound is perhaps used for dining when there are larger crowds.
A nice little fountain lined with dolls on both sides decorated the front of the toilets. 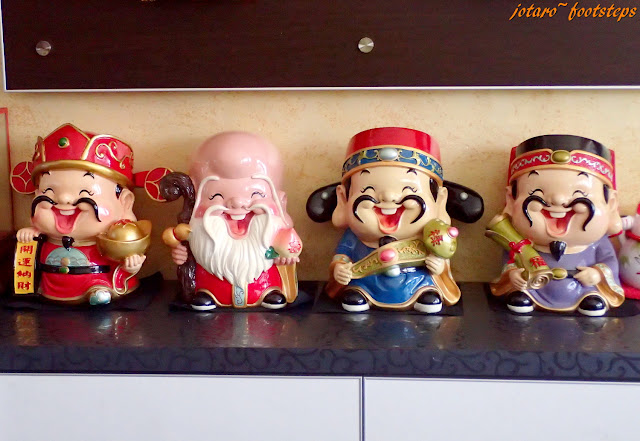 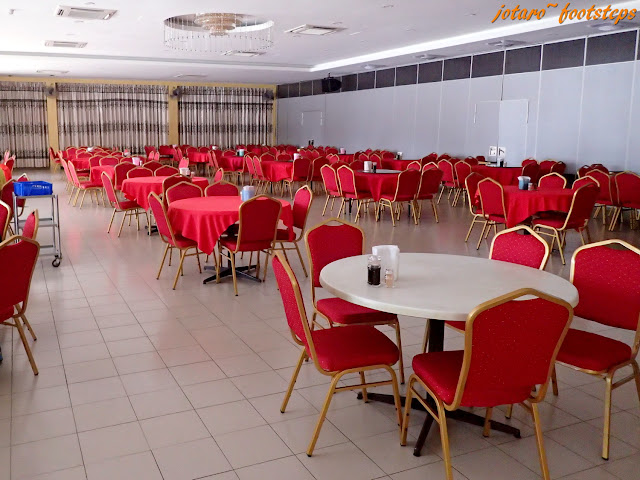 The interior dining hall is large, easily seating at least 150 people.
Okay, I detract; better have a look and taste of their food. 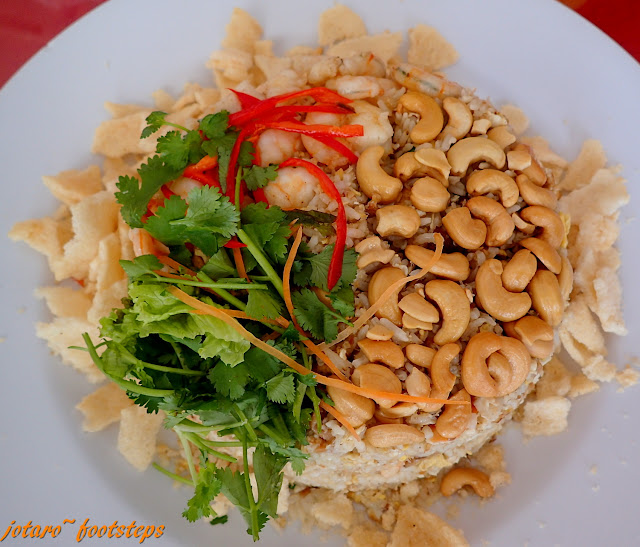 One of our buddies had Chong Tai cater for his wedding in Teluk Intan (yes, they do send their chefs out to do on the spot cooking). Those who attended raved about how good the food is, especially the fried rice; so we had to order the fried rice - but we ordered something different, fried rice with prawns and cashew nuts. It came nicely presented in a short, stumpy cylinder shape topped up with the cashew nuts & prawns, and garnished with cuts of red chilli & green coriander leaves.
By the way, the crackers at the sides were our own addition; we poured some crackers that we got from Sekinchan to make the dish look nicer. 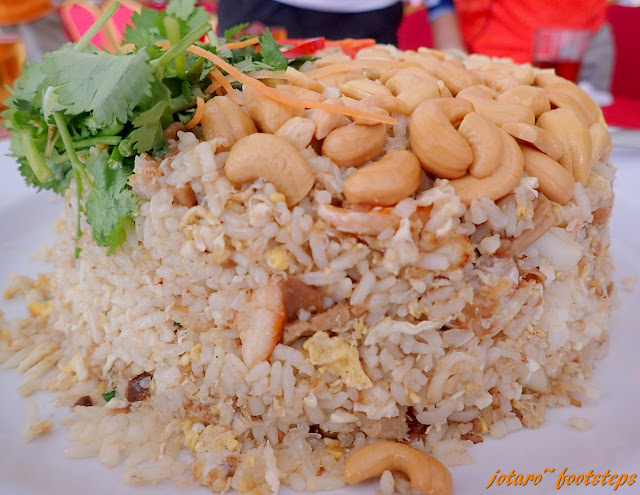 The rice was good, within it were sprinklings of deep fried anchovies enhancing the overall taste. If this was good, my friends, who attended the Teluk Intan wedding, swore that the other style was even better - that was a simpler one with no prawns but had some salted fish. 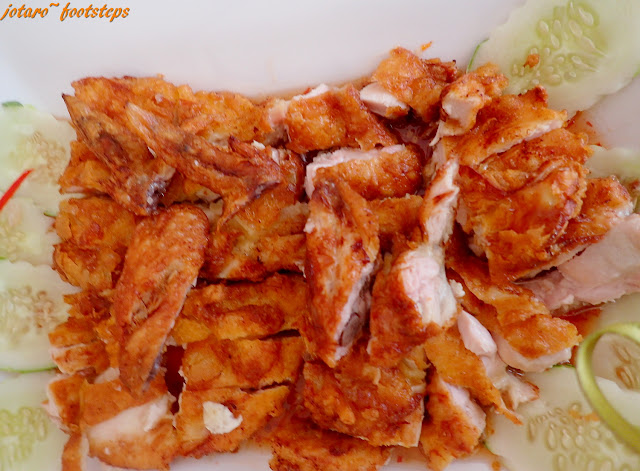 Deep-fried Chicken - this one just simply seasoned with a tinge of soy sauce (and perhaps some other secret ingredients). Very good too. 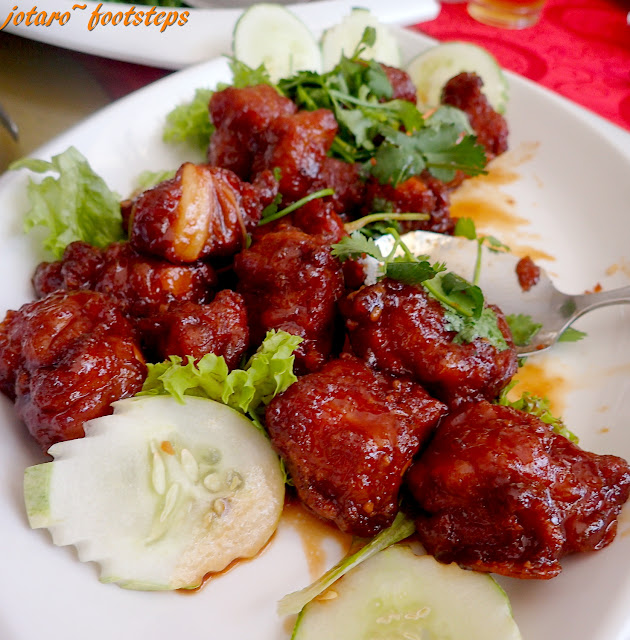 We ate at two tables, with each group ordering different dishes - this caramelized pork ribs was from the other table; I did not taste it but it DOES look good, mouth-watering good! 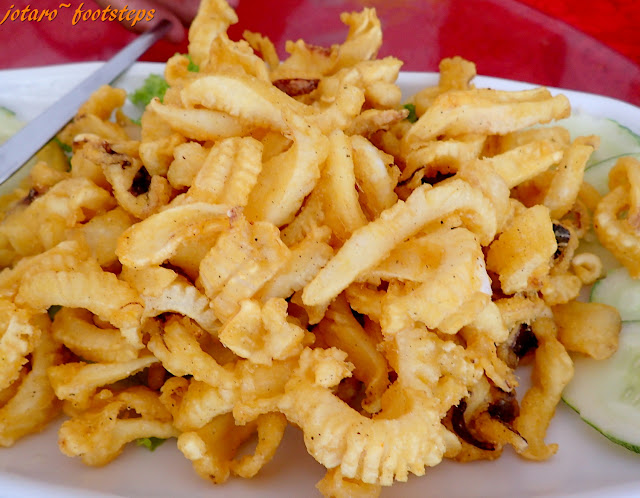 At first we had thought that these were potato chips; no, they are actually squid deep fried in a light batter. Normally I don't like to eat squid done this way as I find them a bit too chewy. But here, these were cut into thinner strips and the thicker pieces also also slice checkered patter on the surface; this certainly made them easier to bite into. Just lightly seasoned and served with Thai sweet chilli sauce, this squid was marvellous. 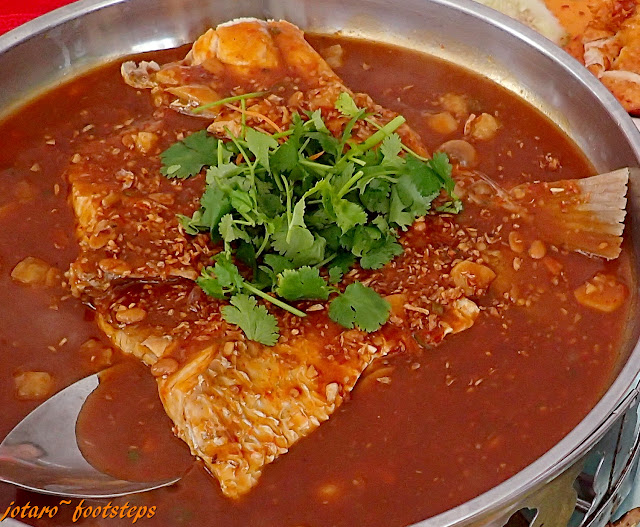 We had ordered simply soy-seasoned steamed fish; the waiter must have misheard and we were served this steamed fish with chilli-bean paste sauce with lard bits floating in them. No complains here though, as the fish was very fresh and the sauce packed a wallop! 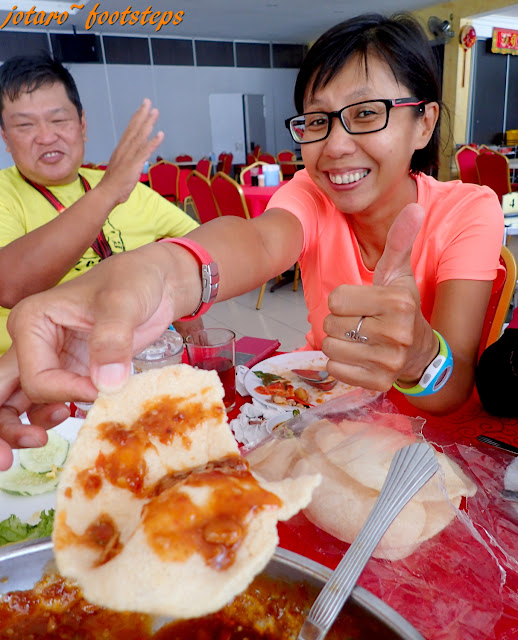 The bean paste gravy was great as a dip sauce for our prawn crackers. 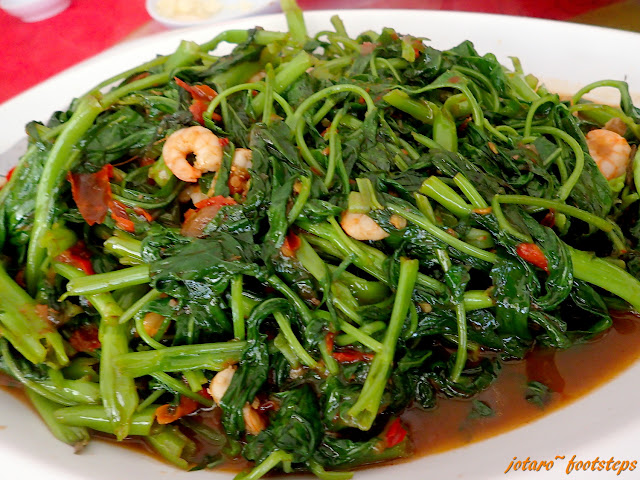 Stir-fried Kankong in sambal belacan with shrimps; this is great, the sauce had enough sambal in it to give a kick and the shrimps imparted their prawny flaours. 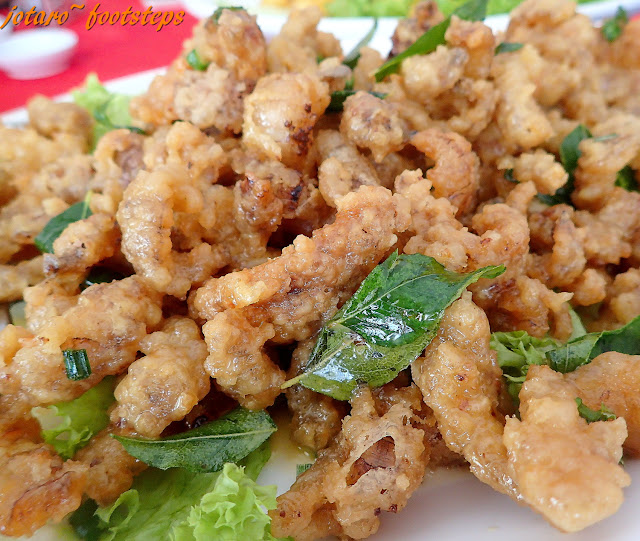 Mantis prawns deep fried with a thin coating of salted duck egg batter. The frying was quickly done in a strong fire thus ensuring that the batter was crispy (but not overly hard) and the prawns inside still freshly soft.

From the other table: 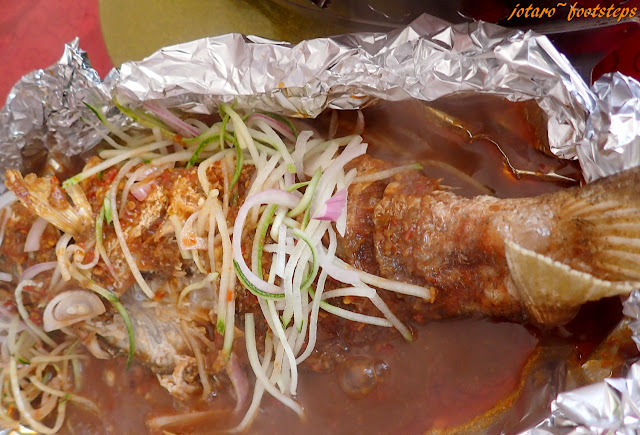 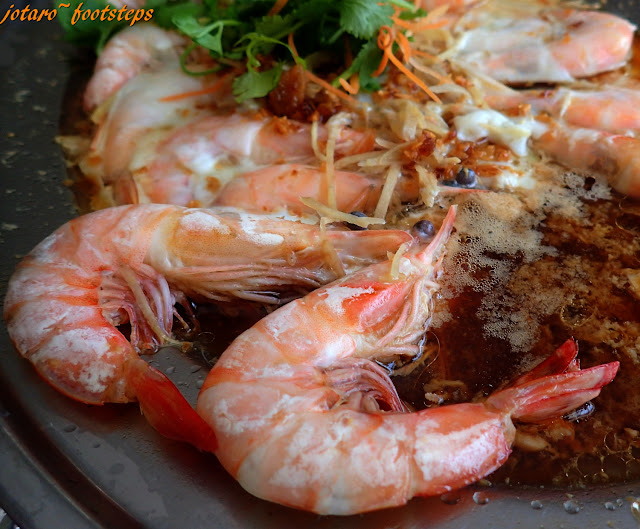 Steamed white-shelled prawns in light soy sauce with a touch of egg white.
We did not go for their signature dishes like the Poon Choi (this dish has to be pre-ordered a day before); but overall it was a good meal and reasonably priced too, at around RM20 per pax for the twenty-two of us. They do have set courses too.

So if you are in Sekinchan and looking for good food, drive further up (about another twenty minutes north along Jalan Lama Kuala Selangor) and treat yourself to a good feast at Chong Tai .


You are at - Jotaro's Blog / Footsteps / YummY! / Chinese Food / Seafood @ Chong Tai Restaurant Sungai Besar
If you like this, view my other blogs at Jotaro's Blog