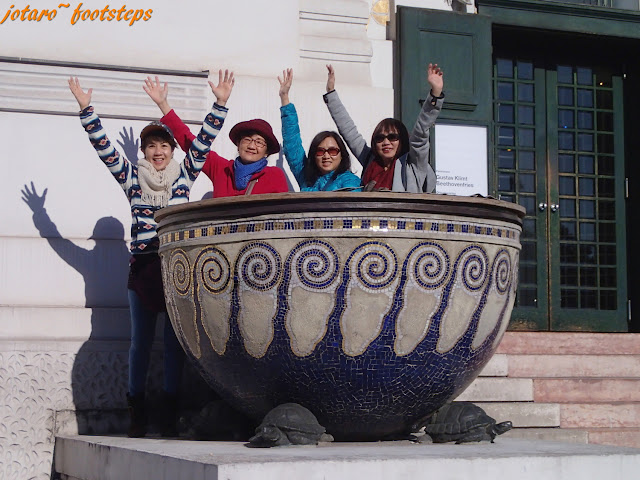 Vienna, Austria - 1st October 2015
Ok, today's a full day and very busy day for us in Vienna; with a planned visit to a morning market followed by a huge palace. An afternoon walk proved to be fruitful with discovering some gems of a park with stately buildings. And it was by trains, trams, buses and some walking. A plus point - we found a treasure of a place to eat!


The above map shows the places we went to on Day 8 in Vienna.
It's another busy and happy day; starting with a visit to a market, the being awed by a palace, popped into a church with a half-visit to an opera house and almost visits to a parliament house, city hall and a cathedral. 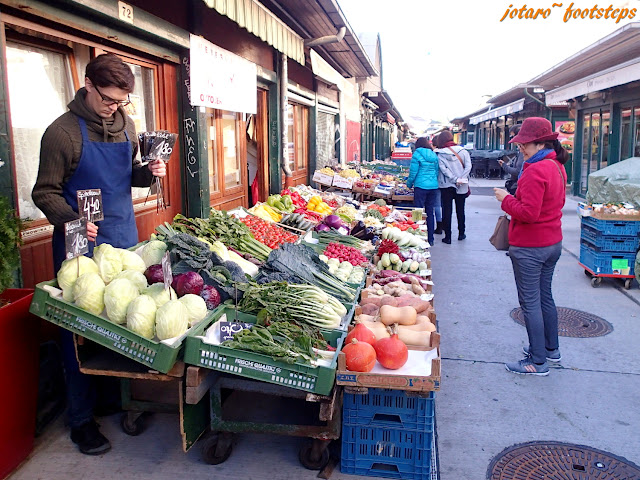 We kicked of the day by taking taking a subway train ride to the Naschmarkt. Staying at Motel 1 at Westbahnof It was easy for us, just pop down several escalators and it was the train station!
The market though very clean and well organised was a bit of a disappointment, not that many stalls were opened yet. And it was already 9:00am! The stall operators also were not as friendly at those we visited at Naplavka Market in Prague. 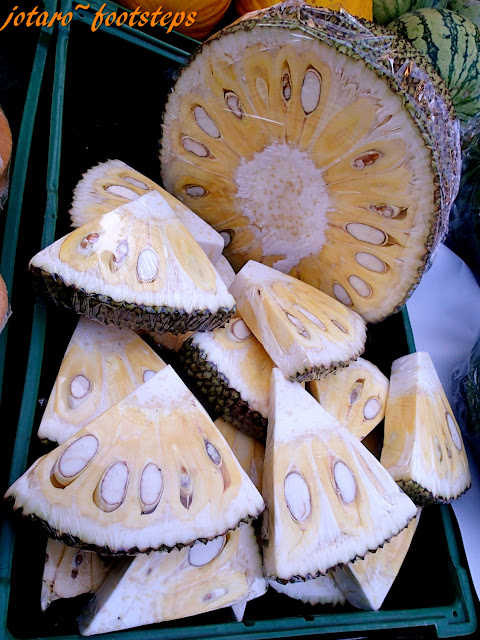 We did see some interesting things though, things to compare with our markets back home - like these slices of Jackfruit. It's perfect for storage but an odd way to eat them. And fresh Thai coconuts were being sold at €4-40 each, more than five times what we pay for them in Malaysia. 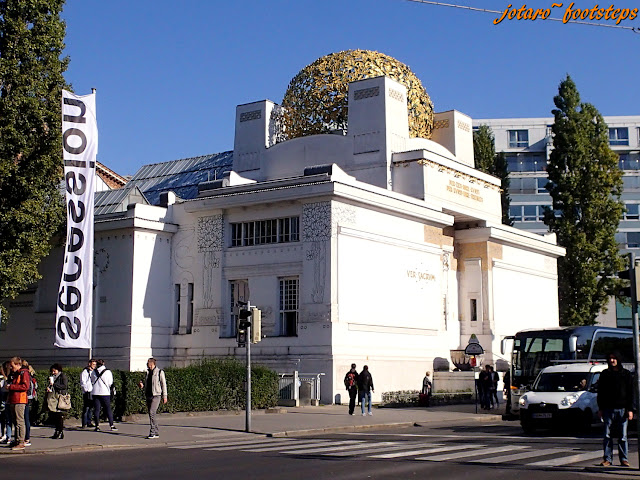 From the market we took a shop walk over to the Secession and almost visited it (we just conveniently used their restrooms and had a peep in). Opened 1898, it houses the Museum of Contemporary Art. With its controvesial "golden cabbage" dome roof, the Secession is now one of the most photographed buildings in Vienna. 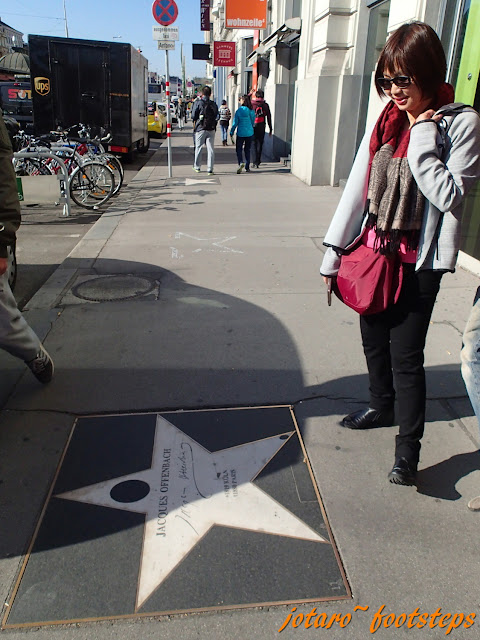 At a nearby the five-foot way in front was Vienna's Walk of Fame, one that's similar to Hollywood's complete with stars! 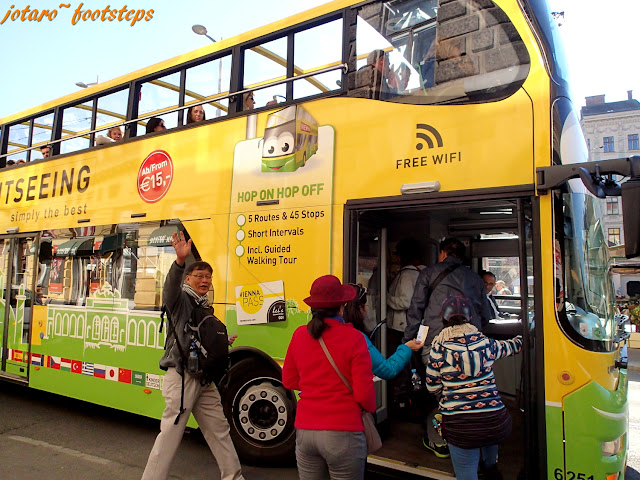 Okay, time to move on and what better way to be introduced to a city than on a Hoppity Bus Tour (that's my way of calling Vienna Hop-On/Hop-off buses). We boarded at bus-stop #22 which is just opposite the Secession; don't get mixed up with the regular bus stops, these stops have different signage, just look for the Hop-on/Hop-off logo. We got the 48-hour pass to cover for the next day too. The pass, which can be bought on board the bus, cost €29-00 and includes for walking tours operated by the company.

Our first destination along the route - Schönbrunn Palace. (Schloss Schönbrunn) This is one of the most visited tourist and rightfully so too as it is indeed an outstanding building. 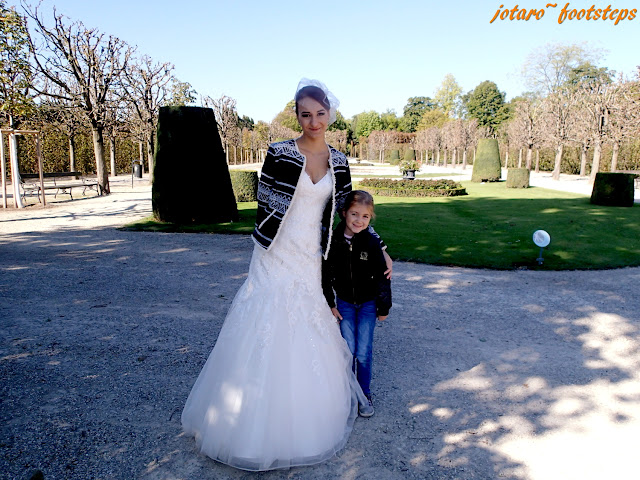 While palace building was grand-looking AND Schonbrunn's gardens were HUGE.. they really awed us eventhough we had to walk lots. Caught this lovely bride posing for bridal photos at one of the side gardens. 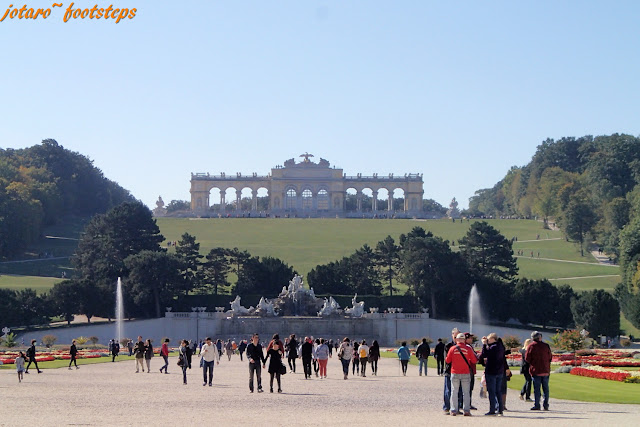 The large rear garden led to the impressive Neptune's Fountain and up on a hill a large, impressive gloriette. The grounds extends on beyond this hill. 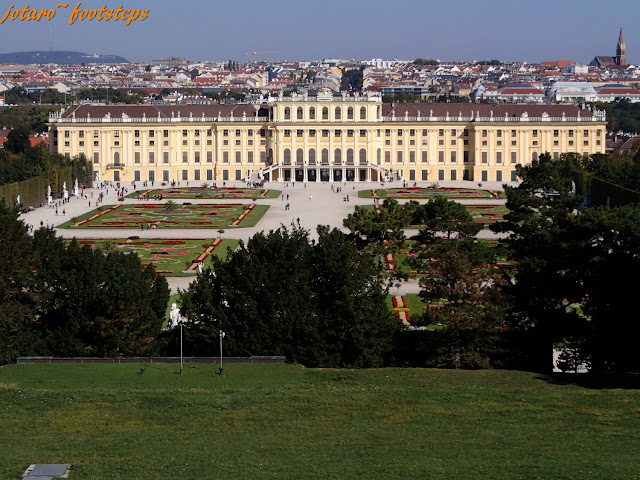 A great view of the palace with part of Vienna in the background.
(... read more about Schonbrunn Palace) 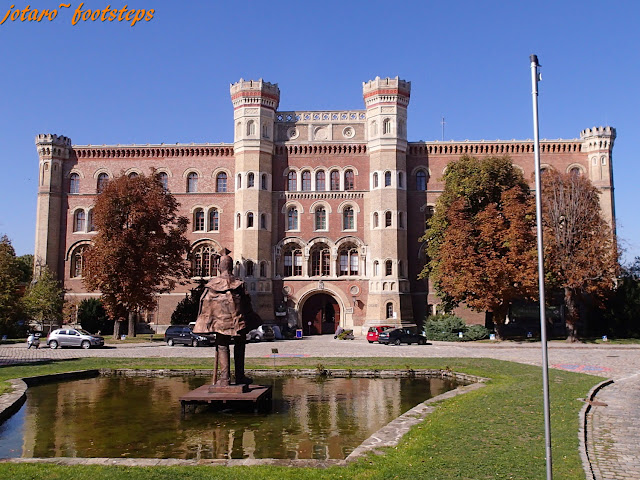 We popped back up the Hoppity Bus, the route took us round inner Vienna and passed by this official looking building - it's the Museum Of Military History (Heeresgeschichtliches Museum) I would have loved to stop and see what they had to show.... but the bus just whisked by.... Bye! Bye Museum.
Okay, that was the almost visit. 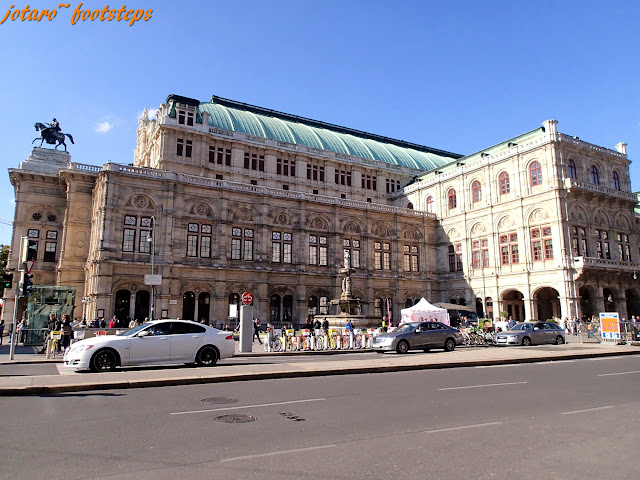 We hopped off at the Vienna Opera House (Wiener Staatsoper).  This was the building that was featured in the James Bond movie "The Quantum of Solace" which showed the building's exterior night view and the interior while an opera running. 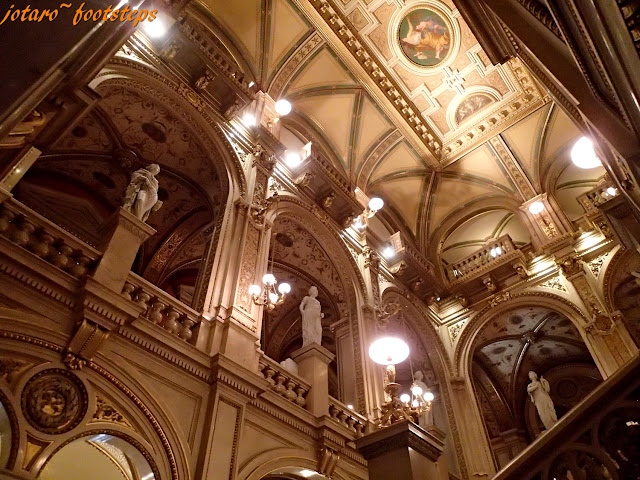 Opera tickets has to be purchased months ahead (unless one gets them from scalpers, which is discouraged); without tickets an usher only allowed us to get up to the first landing of the steps leading up to view the interior. From there I had to stretch my neck to look up at the foyer and it's ceiling
.... Crick! Ouch! Still I did manage to get a few good shots of arches lined with statues and a nice ceiling too. 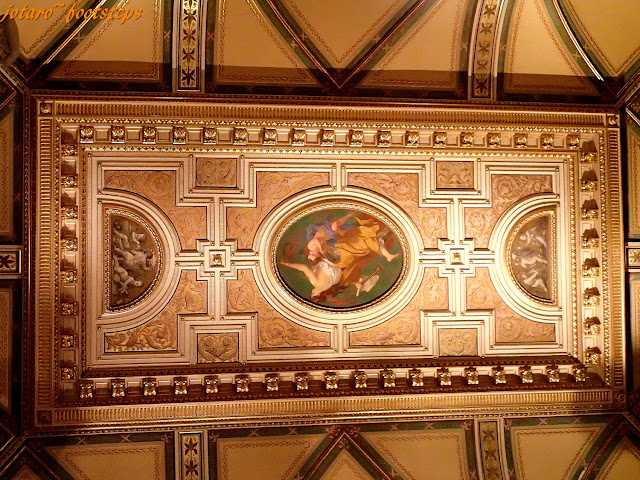 A close up view of one of the ceiling panels; it was worth a painful neck.
The opera house was our almost visit. 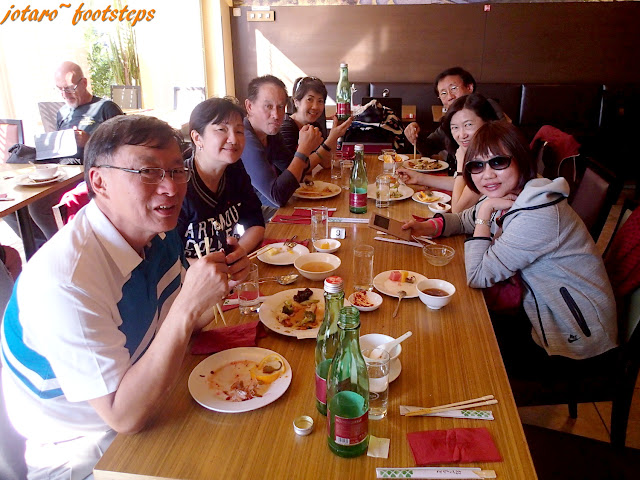 We walked further along to the Tourism Information Office to enquire about a cycling tour for the following day.... Yes... my cycling legs were getting itchy again. Although there was some apprehension while I waited for the tourist officer to talk to the bike company, he did manage to convince them to take me in. The tourist office really go to lengths to help out.
Yahoooooo..... I am going cycling, but that's a story for another day.
We walked back towards the bus station, and that was when we had the foodie find of our stay in the city. It's a place called Wok & More at Karlsplatz, one which served an all-you-can eat buffet at on €9-90 per pax! 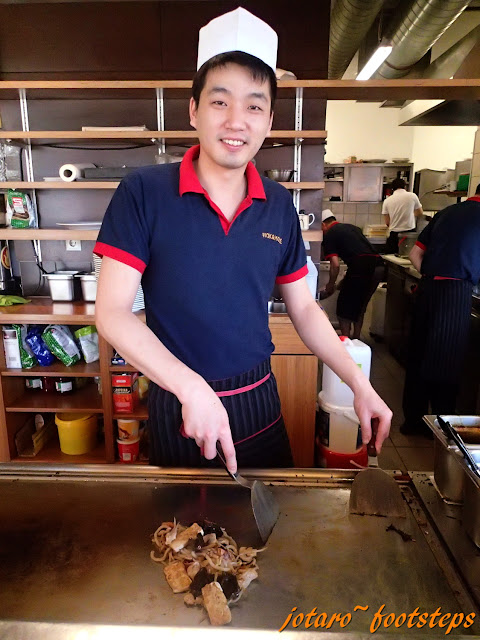 Wok & More is a very sporting place, with a very wide range of salads, fresh food and desserts, they encourage patrons to take their time to eat and go for as many rounds as possible instead of piling up food for a couple of rounds. There is no time limit, eat as long as they are opened.
We selected our food from and sent it to a couple of chefs who cooked it teppanyaki style on a large hot plate. 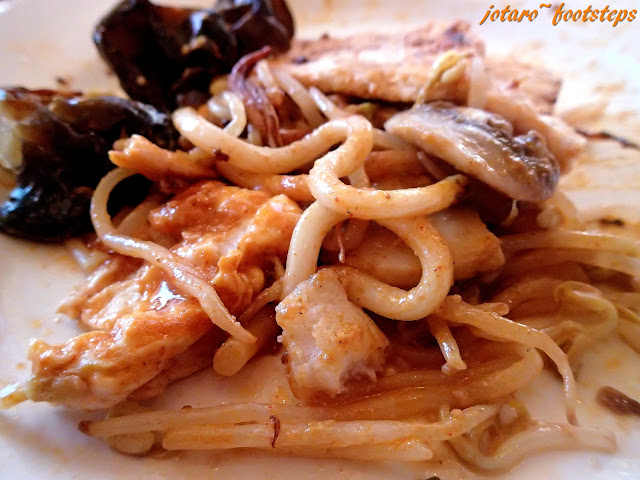 This is one of my rounds - a fusion of Japanese udon cooked in Thai curry. Wunderbur!
We did eat a fair bit but did not gouge our food; spending about an hour there slowly enjoying ourselves while chatting about our trip.
(... read more about Wok & More) 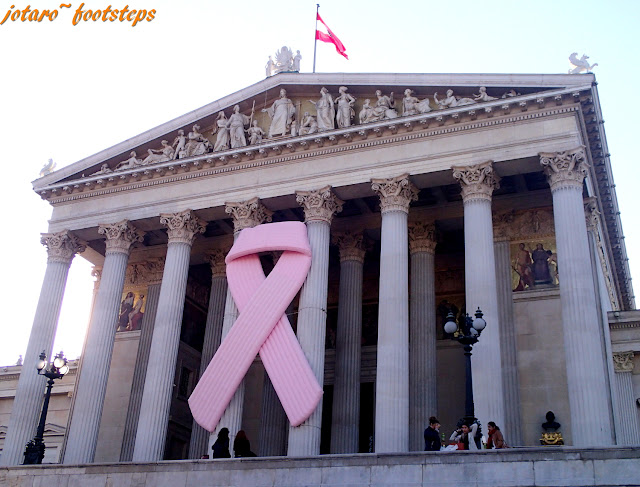 From Karlsplatz we took a tram over to the Austrian Parliament. The front looked very Grecian with tall Corinthian columns holding up the roof gable wall which had marble statues adorning it. Between to of the columns was a large Pink Ribbon, a testament of the country's support on awareness of breast cancer. 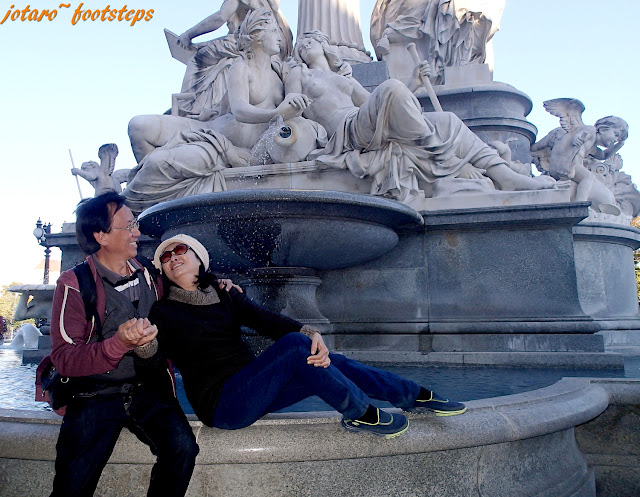 In front of the grand building was the Athena Fountain (Pallas-Athene-Brunnen), it may not be the Fountain of Love but it certainly made us posed lovingly in emulation of a couple of the statues. Cheong's & Marina's emulation looks rather close; put them in Grecian robes and it would have been perfect! 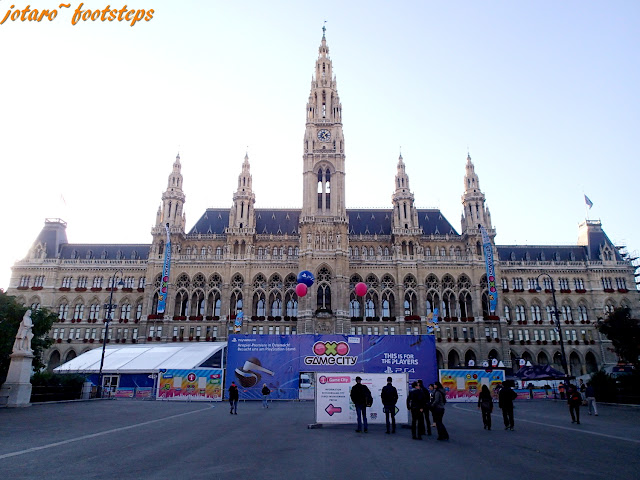 The nice cool weather made us want to walk more... actually it was also to walk off our heavy lunch. And we were in luck, just nearby is the large Rathausplatz park and it within it is the Vienna City Hall, the Rathaus. 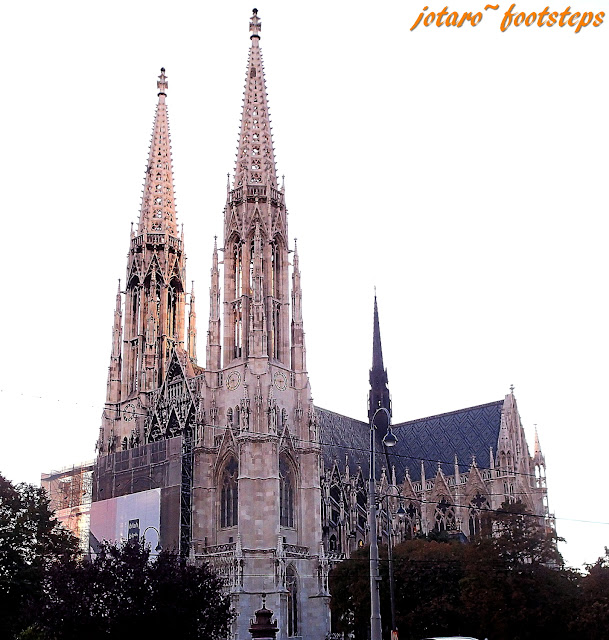 As we were walking out of the park, we espied a lovely looking Gothic church; it was the Votive Church (Votivkirche) which was built to to thank god for the  failed assassination attempt on Emperor Franz Joseph. So by this account it is a relatively new church, eventhough it is slightly more than a hundred years old. 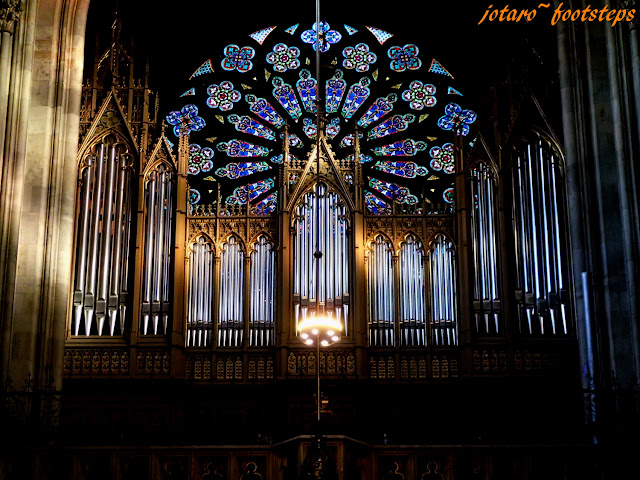 We dropped into the church, with it's numerous stained glass widows. The one that impressed me most was the on at the rear, sitting just behind the organ pipes. 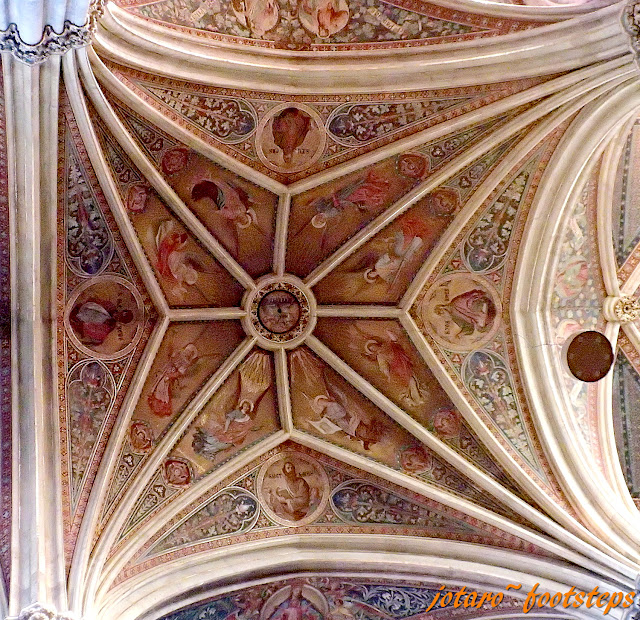 The church's ceiling was beautiful too.... haha... I seem to have a penchant for ceilings!
First at the opera house, then here. 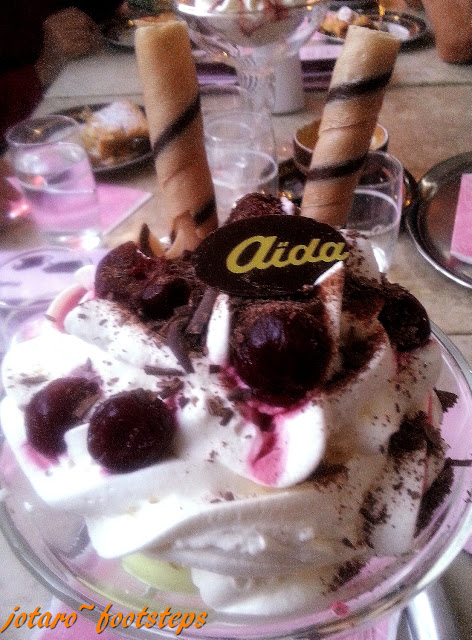 We took the underground train to Stephansplatz (where we had to change trains) and decided to go up and have a light dinner at Aida ... it was a very light one one of lovely Viennese ice-cream... 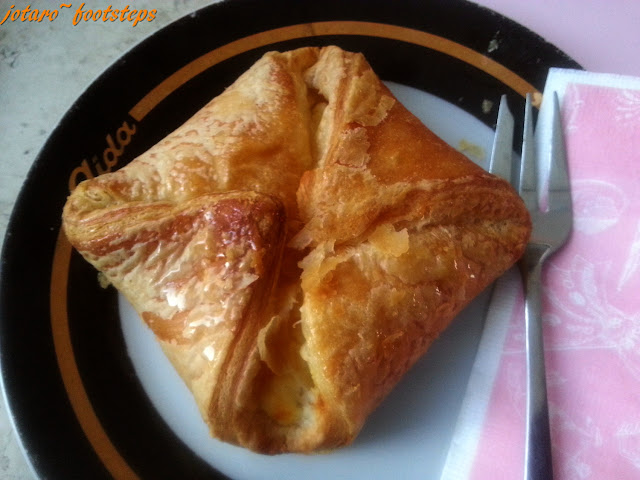 ... and this hot-cross bun. Yummy yummy!
What better way to end the day than watch the colourful night life walk by. 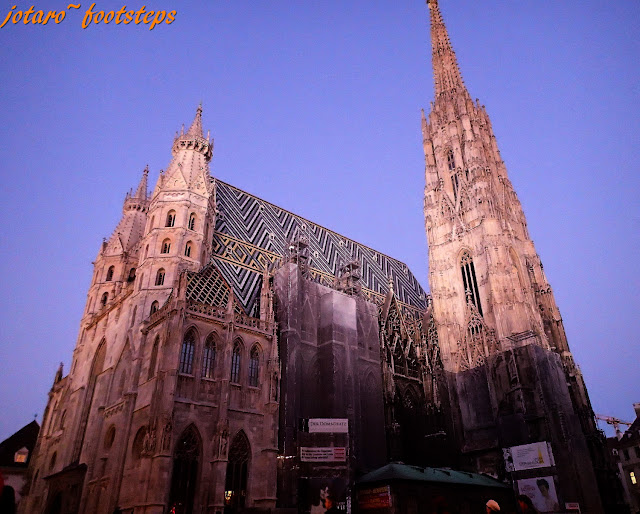 Caught a glimpse of St. Stephen's Cathedral (Stephansdom) glowing in the light of the setting sun. 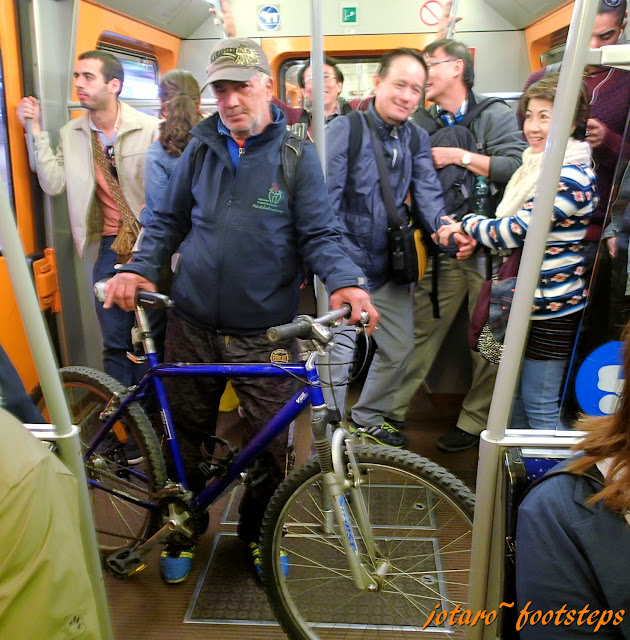 As we boarded the train to head back to Westbanhoff, this man came rolling in his bicycle into the train. Being an avid cyclist myself, I really admire how mature the European society is in accepting this. No trying this in Malaysia... for the moment.
Ok.. ok... I will have to be frank, from his breath we knew that the man had just had a jolly round of Oktoberfest with his buddies. 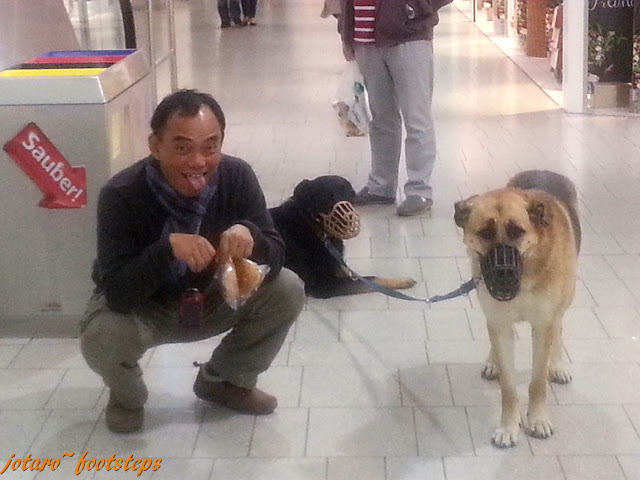 Another sign of the maturity of the Austrian society and how disciplined their people are. These dogs were left unleashed at the entrance of the Westbanhoff supermarket while the owner went shopping. The owner had ensured that her dogs were well-trained, while others walk by as if this was the norm.
Oh yah... this old dog was also well-trained; also patiently waiting.