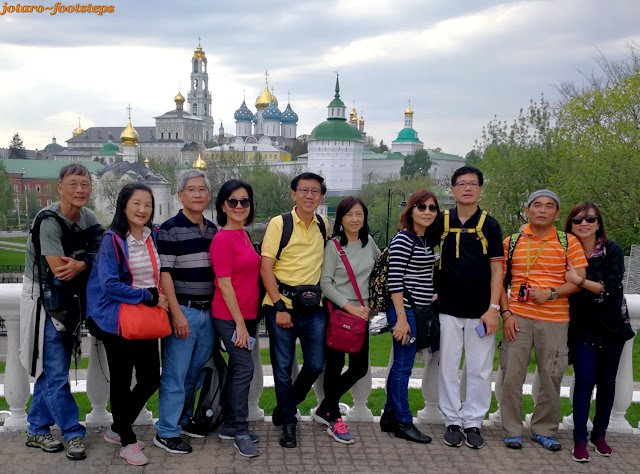 After a 14-hours Thai Airways flight from Kuala Lumpur via Bangkok (inclg. a 1-hr delay in Bangkok's Suvarnabhumi International Airport) we arrived at Moscow's Domodedovo Airport to be met by Alex (our guide from Angel Tours) and was immediately whisked off on a 1-1/4  hr. drive to Sergiev Posad, one of the Russian Golden Ring cities. It was the Victory Day holidays, but we arrived in the late evening and thus missed the celebrations with fire works.
The following day was a full day tour of Sergiev Posad with visits to:
1. 73yrs old Yuri Victor Artist Muzey Krest'yanskogo Byta "Zhili-Byli" Музей крестьянского быта "Жили-были" - to see his artwork and Russian cultural collections.
2. First exposure to beautiful tulips at the City Administration Square (Sovetskaya Ploshchad' Советская площадь Sergiev Posad Moskovskaya oblast').
3. Sergiev Posad "Konniy dvor" City Museum of Russian culture.
4. Matryoshka Doll Museum of the famous Russian dolls (it's next to the city museum).
5. The Trinity Lavra of St. Sergius (Russian: Тро́ице-Се́ргиева Ла́вра) - the most important Russian monastery and is the spiritual centre of the Russian Orthodox Church.
6. A life size Matryoshka Doll at the "Ресторан Русский дворик" (Russian Courtyard Restaurant).
7. Church of St. Paraskeva
8. Memorial Slavy (War Memorial).
9. Best view point of the Trinity Lavra of St. Sergius at Blinnaya Hill.


Day 3: From Sergiev Posad to Rostov

It's by van from Sergiev Posad to Rostov, another of the Russian Golden Ring cities. En-route we stopped at a secluded monastery and a secluded convent. Both of which were started by monks and nuns who wanted more privacy away from the public/tourist for their private prayers. Photos of these two places are shown, but out of respect for their privacy, their names are not indicated and their locations not shown in the route/destination map. Also today we had our first taste of the renown Russian borscht beetroot soup.

Hotel: Dom Figurina Hotel (there are mosquitoes at the town, so make sure the room have netting at the windows)

Day 4: From Rostov to Suzdal to Moscow
We had a long 460 km. journey ahead and were supposed to leave Rostov early at 5:30am, but due to a bad night of mosquitoes we only left at 7:30am to head for Suzdal (another Russian Golden Ring city), and had to skip the places of interests in Vladimir so as to avoid the Moscow rush-hour traffic jam. Our route took us along the rougher rural roads (some stretches were un-tarred). It was a pleasant quiet route, only disadvantage was finding P-stops. The guys had an emergency stop at the woods mid-way to Suzdal; while the girls managed to hold on until we reached Motel'"Kartskhiya" on the outskirts of Suzdal. By now we had learnt to recognize the important Russian word "Туалет", i.e. toilet 😂.

Places of interest:
At Suzdal
1. Monastery of Our Savior and St Euthymius (Spasso-Ephimovsky Monastery) (listened to church bell pealing symphony) .
2. Smolensk Winter & Summer Temples (Our Lady of Smolensk Church [Smolenskaya tserkov] & Simeonovskaya Church) (viewed from outside).
3. Suzdal Kremlim (the Suzdal Museum is inside here too).
4. Intercession (Pokrovsky) Monastery (Convent of the Lady of Intercession) .
6. Church of Boris and Gleb (Kideksha Church), the oldest church in North East Russia.
7. Museum of Wooden Architecture, the wooden buildings assembled here were collected from different villages of the Vladimir oblast (region), some of which are:
- Church of the Transfiguration.
- Church of the Resurrection.
- House with Mezzanine.

At Moscow
1. Monument to the Conquerers of Space (passed by).
2. Ostankino Radio & TV Tower (passed by).

Day 5: Red Square, The Kremlin & Metro Stations
An amazing day of visiting some beautiful Moscow Metro stations, the Red Square with two main iconic building, and the historical Kremlin (the seat of the Russian government). Later it was also to the very secured Diamond Fund & the Armoury Chamber), where the Imperial Crown of Russia and Russian Imperial Treasures are kept. In the evening, some of us went for a night walk and were impressed by the beautifully lit buildings.


Day 6: Of Vodka, Bazaar Markets & Pushkin Cafe
Today was a contrasting day of cheap flea markets and expensive fine dining.
We continue our tour of the beautiful Moscow Metro stations. At one of the stations, we had a fright when one of our buddies leg was caught by the closing door while trying to get on board the train. Fortunately, other passengers help pry the door open.
The Metro tour ended at Izmaylovo Station where we took a short walk to the nearby bazaar flea market for some shopping. After that we adjourned to a vodka museum for a history of vodka and also sampled some different varieties.
After that we took on the Moscow traffic, returning to our hotels on a van & car; the 16km journey back to our hotel took us almost an hour and a half.
In the evening, we went to the renown Café Pushkin for a taste of fine Russian cuisine.

Today I got to scratch my cycling legs and did a bit or riding around Moscow with Moscow Bike Tours and joined their Grand Moscow Bike Tour. While I was cycling, my buddies had a free and easy walk around the city that included a visit to the State Tretyakov Gallery. I was fortunate to be the only one turning up for this guided bike tour (as weather forecasted was rainy but it actually wasn't) and Vado the guide took me on a off-the-beaten track route that included:

Just past six in the morning we arrived at St. Petersburg Ladozhsky Railway Station (Ладожский вокзал) and were whisked to our hotel in town on a Merc Sprinter. We had taken the "Red Arrow" sleeper train the previous evening from Moscow.

When we reached town, most of the places were still not opened for breakfast (they only open at 7:00 to 7:30am) But we managed to get some sandwiches, pies and coffee at Coffit.

After checking in we were met by our local guide Tanya and together with driver Vassily took us on a drive to visit the palaces.
First was a 2-hrs drive to see Catherine Palace with its Golden Enfilade, Amber Room, Catherine Park, all located in the town of Tsarskoe selo (Ца́рское Село́).
Enroute to the next palace, we had a premium lunch at Nordic Restaurant that included:
Oliver salad, baked vegetables, venison, pan-fried Mackerel, crayfish, Chicken Kiev, crayfish, cakes, sorbet, and Icecream.
After lunch, we headed for Peterhof Grand Palace, with it's beautiful gardens and its Peterhof Fountains.
It was back to town by a fast hydrofoil boat from the Peterhof Jetty (Пристань ГМЗ "Петергоф"), located at the edge of the Gulf of Finland, the easternmost arm of the Baltic Sea.
Places of Interest:
1. The Catherine Palace (Екатерининский дворец).
2. Peterhof Grand Palace (ГМЗ "Петергоф").
3. Peterhof Fountains.

It's a walking tour today, and Tanya took us to several key places in St. Petersburg city centre including parks, canals and stately museum buildings.

It's a day of tours! In the morning I joined a guided cycling tour that took us to several points of interest and our route also ran through the compounds of public housing. Tour highlights included:

In the evening we all went on a Astra cruise along the Neva River (Нева́), that passed by:
1. Admiralty building, Saint Petersburg (Адмиралтейство).
2. Zoological Museum (Зоологический институт РАНm).
3. Zenith Arena (Gazprom Arena, Газпром Арена).
4. Bridges spanning across the Neva River; and a tour of opening of the drawbridges.

It's a free & easy day with a longer visit to the St. Isaac's Cathedral and a climb up to it's cupola for a panoramic view of St. Petersburg (Санкт-Петербу́рг, Sankt-Peterburg). Entry ticket to the cathedral was 300 roubles, copula climb was an extra 260 roubles.
In the evening we took a slow walk through Alexander Garden and along the quieter Galernaya Ulitsa over to Nicholas Palace to see the folklore show. It's presentation of Russian folk stories through traditional music and dance with colourful costumes. Dances were from the Russian north, the Urals & Siberia and included lively Cossacks. Would have been more complete if dances from the southern regions were also included.

In the early morning we took a high-speed Sapsan four-hour train ride from St. Petersburg's Moskovsky Station (Санкт-Петербург-Главный, St.Petersburg-Glavny) back to Moscow's Leningradsky Station (Ленинградский вокзал, Leningradsky vokzal). Alex met us at the hotel and took us to Sparrow Hill & Victory Park, the couple of places that he had missed showing us earlier, his tour task was then completed. We then went forth ourselves to the Old Arbat Street to view the place and had dinner there before taking a nice night walk back to the hotel.

After a wonderful two weeks, it's time to say goodbye to Russia. Some spent the morning for some quick last minute shopping nearby while a few just relaxed at the hotel. An airport transfer van sent us to Domodedovo International Airport for our Thai Airways flight back to Kuala Lumpur via Bangkok. All would have gone smoothly but for a flight delay in taking off which had us rushing like mad to catch the connecting flight at Bangok's Suvarnabhumi Airport (ท่าอากาศยานสุวรรณภูมิ). In the rush one of our buddies dropped his passport at the security check, fortunately he managed to find it.