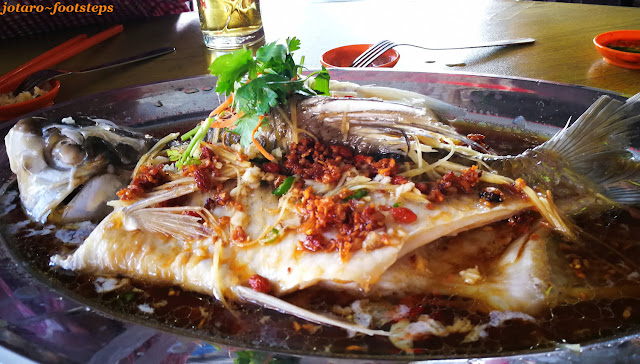 Lenggong, Perak, Malaysia - March 2019
The towns in Hulu Perak are renown for their fresh river fish, and the best thing is these town are not over-exposed to outside tourist influences; so their pricing are still reasonable and their cooking style still to local taste and flavours. Names of several towns come into mind, places like Lenggong, Ayer Kala, Gerik comes into mind. These towns are so small that many of them may have not more than five good restaurants. We were at Lenggong and did get a chance to try one of the nice shops called Restoran Chat Sook; literally translated mean "7th Uncle's Restaurant" 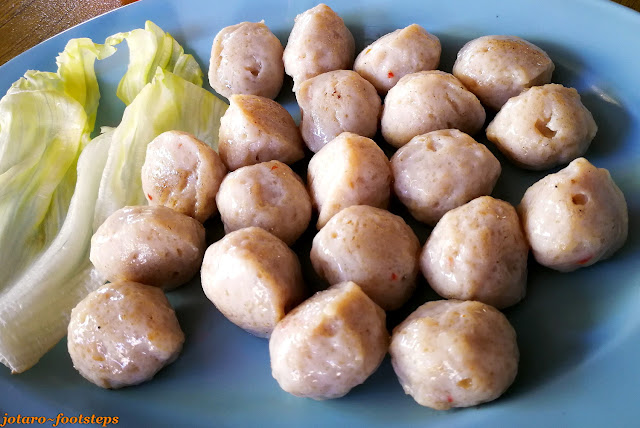 Okay, let's leave the best part of the meal, the fish - their pièce de résistance, to the last.
We start our meal with the Saituo (西刀) fish balls. This firm texture and tasty flesh of fish (in English is known as the Wolf Herring, and in local Malay called the Ikan Parang) makes one of the best fish balls. Here at Chat Sook, they make their own by hand and it is one of their favourite dish. When ours came, I could see why it's such a draw - of adequate size, it's deeper colour and slight sheen glaze hints on fresh and adequate fish being used to make them. No short-changing here! 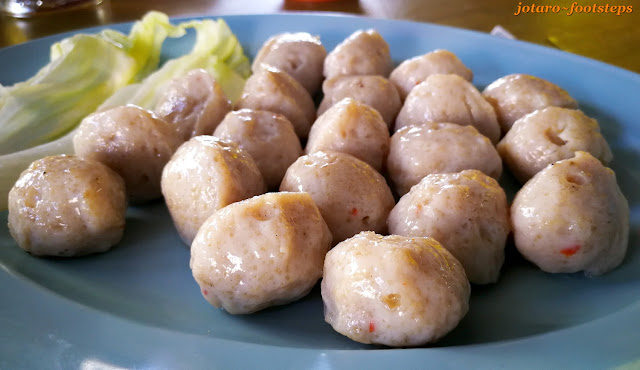 The Saituo fish balls were served just adequately poached and not as a soup so that they tasty fishiness is retained and not drawn into the soup. Perhaps they do serve them as a soup, but why waste the pure flavours? One bite in and we were hooked, just of enough bounciness so that a firm bite will send the succulent flavours filling up one palate. 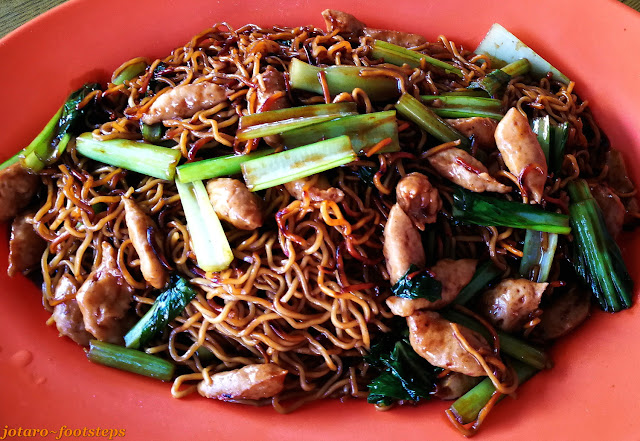 Next on the list was their fried noodles with fish paste. The noodles came looking rather average; but looks were misleading - it was one of the tastiest noodles that I have tried! Strong dark soy sauce have been use to give it a solid taste! 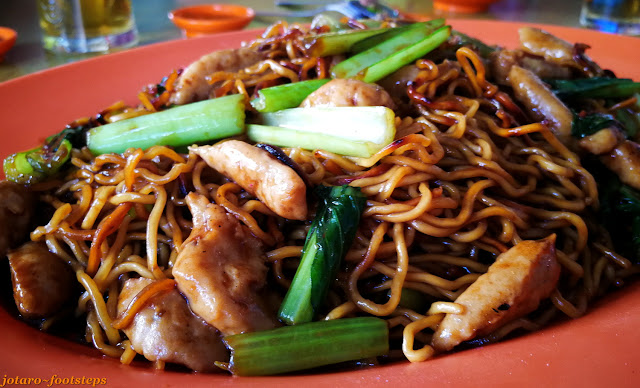 The frying with good and adequate lard have enhanced the overall flavours. To top it all, the fish paste were made with Saituo fish too! Need I say more? 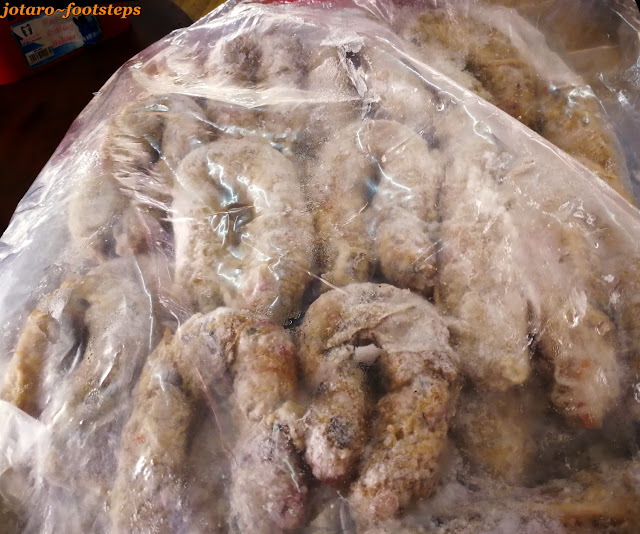 As we were eating, I noticed one of their guys delivering bags of these funny looking sausages. I asked the Captain what they were? These are our signature "Choon Kin", I recommended to you all when ordering but you all didn't want!"..... Oops!
So we ordered a two lengths.
Choon Kin are a sort of Chinese sausage, freshly made with minced pork and had bits of pork liver, small cuts of carrots, onions and spring onions added. The minced pork is of coarser style and are marinated (not seasoned over days as compared to the preserved "Lap Cheong (臘腸)" Chinese sausages). The ones here looked a bit odd uncooked as they had been coated with a thick layer of fresh flour. 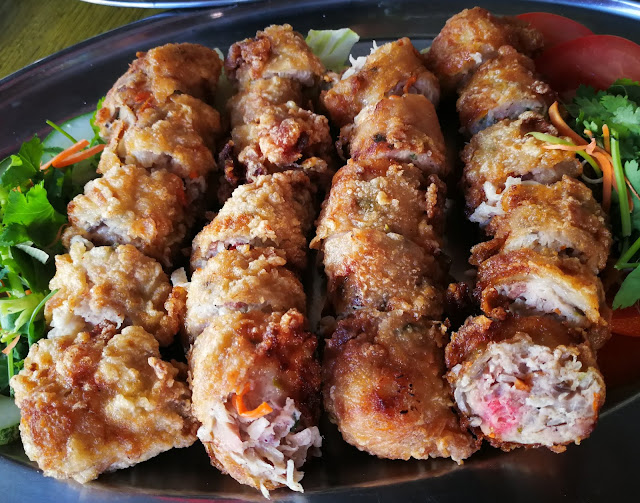 And here they are after being deep-fried, looking much more appetizing than the raw ones. As can be seen, the additional flour coating had given the finished product a thicker, pimplish and crunchier skin. 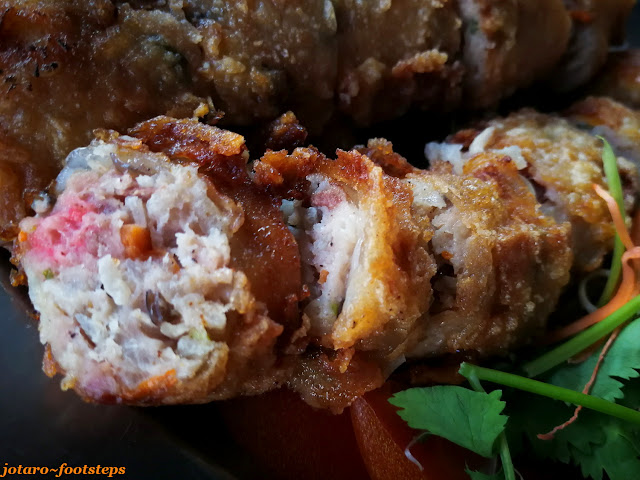 A close up look at the coarser, more bitey minced meat; as we bit in... "was that a bit of prawn?" Perhaps they did add minced prawns too..... !YummY! 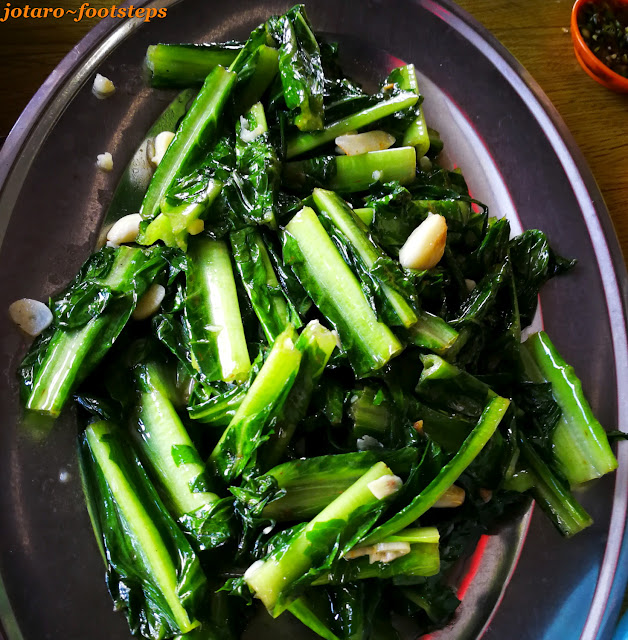 To balance of the strong flavours, we had this "Yau Mak" (Romaine Lettuce). It was stir-fried with just slices of garlic. Again, the rural freshness comes through as each bite was crunchy and brought out the country freshness. A simple dish, light of taste to prepare us for their pièce de résistance. 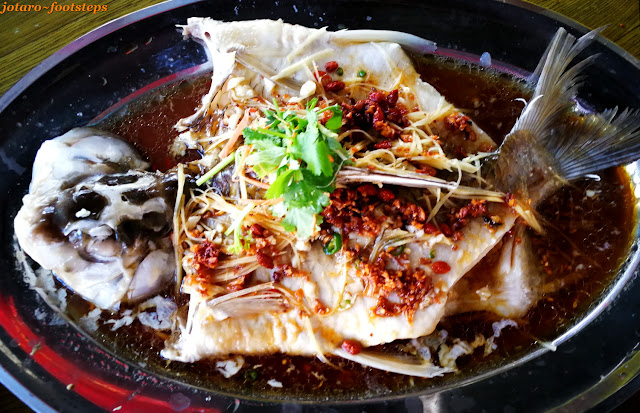 The small towns here are renown for good fishes like Tapah, Tengalan, Sebarau, Jelawat or even the very rare Empurau. Many of these fishes can hardly be found in the cities or large towns. In fact, many city residents may not have even heard of these fishes - their names were mostly in Malay, alluding to their rustic background,
One of our team tried to order a Patin..... and was give a cheeky brush off... "that's not a fish, we don't serve them here!" In the cities, the patin is a priced fish well known for it's fatty sweetness. Such is the attitude of the locals... even the best of the city fishes is looked down on! We sheepishly ordered a Tengalan. 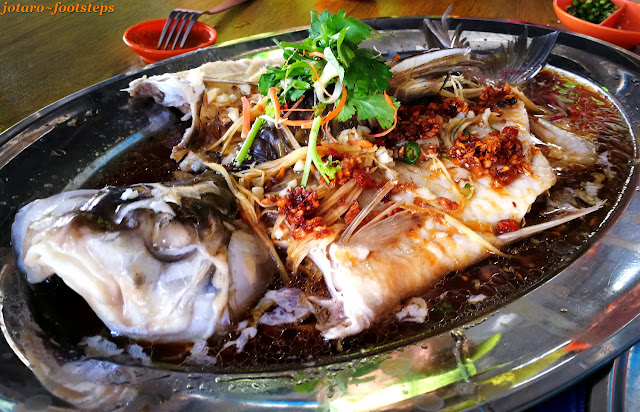 Anyway I digress..... let's get back to or master-piece, the Tengalan, before it's ugly head bites my tongue off.
The fish was... SUPERB! It's meat firm yet very sweet. But like most river fishes, eat with care as they have many bones. 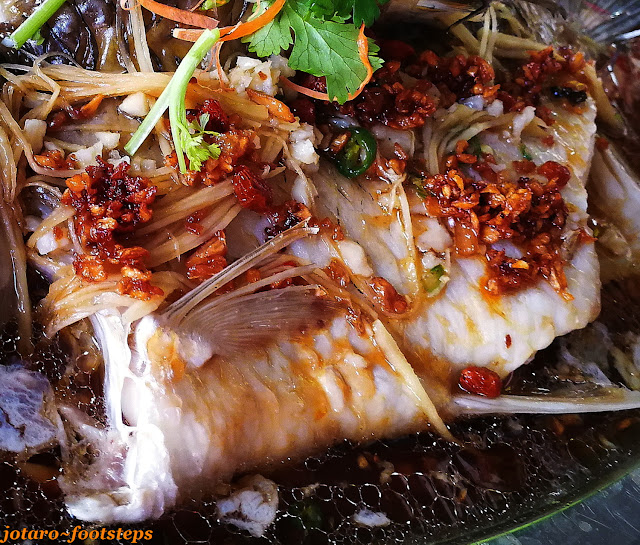 The best part is of course the tummy, less bones and the fish fat adding their creaminess to the sweet meat.
They named this sytle as Siao Loong Cheng (Bruce Lee Style). But I wonder why it is called this? Because it can sure give a big kick..... until one land on the next table? 😋 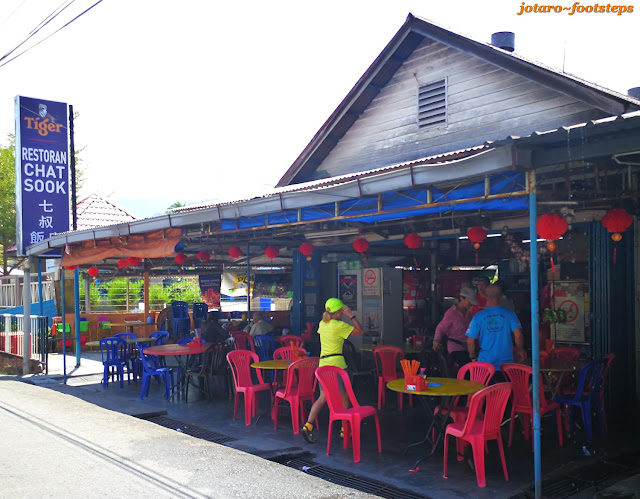 You are at - Jotaro's Blog  / FootSteps / YummY! / Chinese Food /  Best Tengalan River Fish @ Restoran Chat Sook Lenggong (七叔饭店)
If you like this, view my other blogs at Jotaro's Blog
(comments most welcomed. if you like this pls share via facebook or twitter)
Posted by Jotaro Zen at 5:51 AM