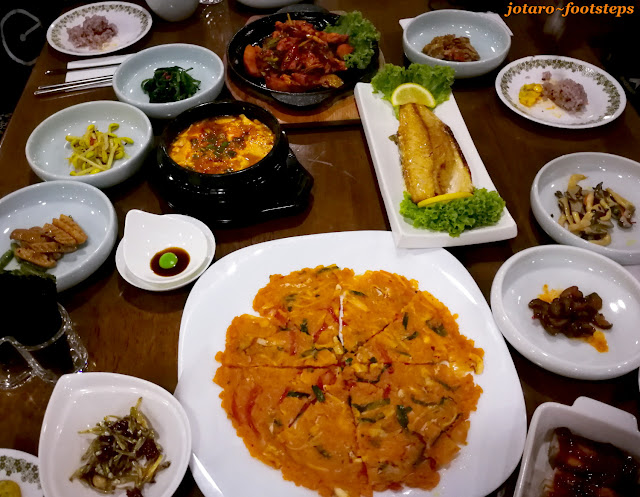 Nong Chik, Johor Bahru, Malaysia - September 2018
We were on a trip down to attend the Brompton Malaysia Day Cycling Event in Johor Bahru and had drove down a day earlier. It's been a while since I was last at the city, it had changed very much and so I was eager to see the many new suburbs that have cropped up and to try out the new food outlets too! And we were most pleasantly surprised to find a Korean restaurant, the Korea House, located at a new stretch of slightly up-market looking street in the Nongchik affluent neighbourhood.
And we were charmed by the nice Korean lady running the place, her soft-spokeness and detailed decoration of the place had lent an authentic Korean air to her place. And to cater for the Malay majority of the locality here, their food is "Pork & Lard" free. 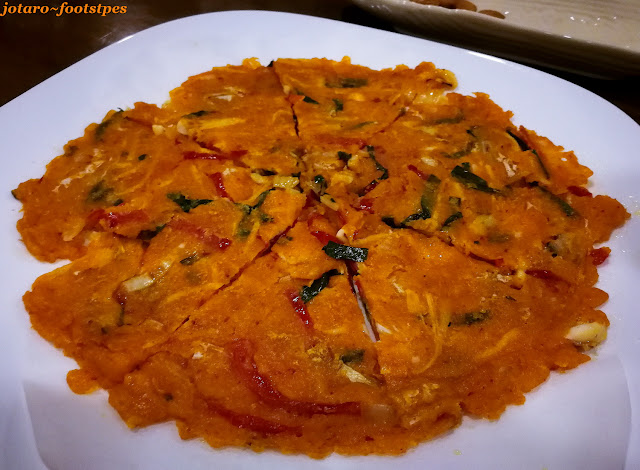 We kicked off with a Buchimgae (부침개), a Korean Pancake, but this was not the regular one this was a Kimchi Pancake loaded with vegetables. The one here was thinner and crispier something akin to a crispy thin pizza. Taste-wise, with the kimchi it was stronger than the usual pancake.
This pancake is also referred to as kimchi-jeon (김치전), and is primarily made with sliced kimchi, flour batter and sometimes other vegetables. However, meat (ground pork) is also often added, the ones served here was vegetarian, sans the pork. The dish is good for using up ripened kimchi. Kimchibuchimgae is often recognized in Korean culture as a folk dish that anyone could make easily at home with no extra budget. 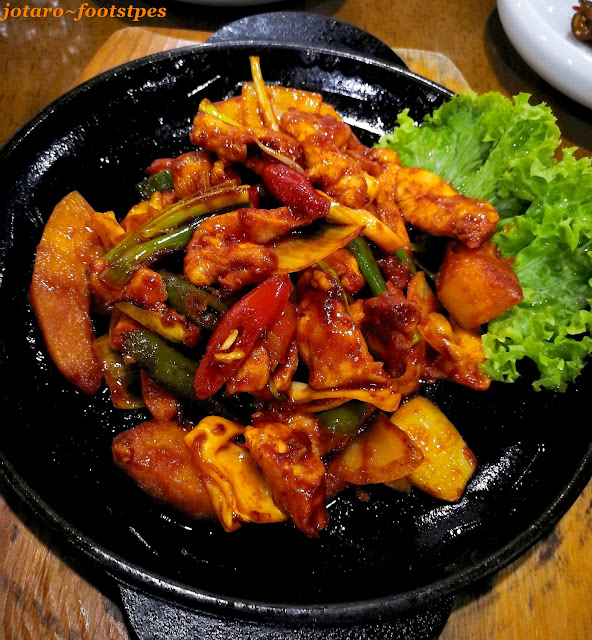 Our mains was this Grilled Chicken Bulgogi, looking very red with . It came piping hot served in one of those dark clay pots sitting on a timber tray. 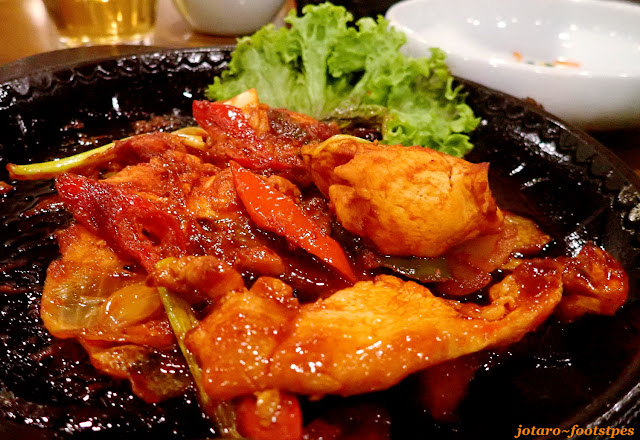 It came with thin slices of chicken which had been to enhance its flavour and tenderness with a mixture of soy sauce, sugar, sesame oil, garlic, and other ingredients such as scallions, ginger, and onions. This dish was served with a side of lettuce, which we used to wrap a slice of the cooked meat, with a dab of the ssamjang, it's a hands on ssam style! 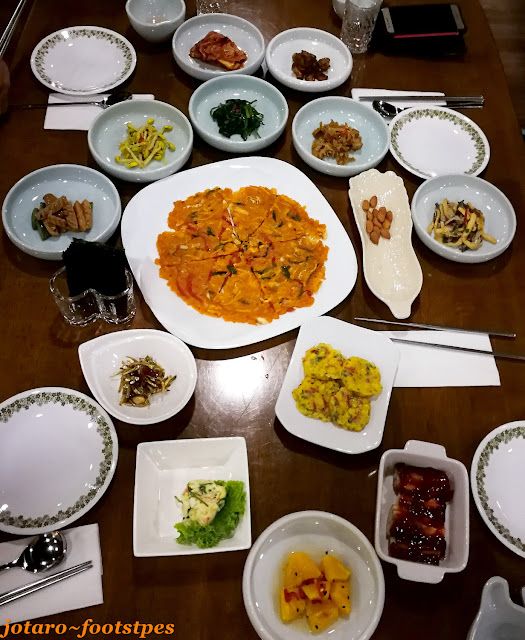 Our dinner came with the usual accompaniment of Korean Banchan (반찬) side dishes. My favourites were the cuts of small mushrooms... and surprisingly the mash potatos! 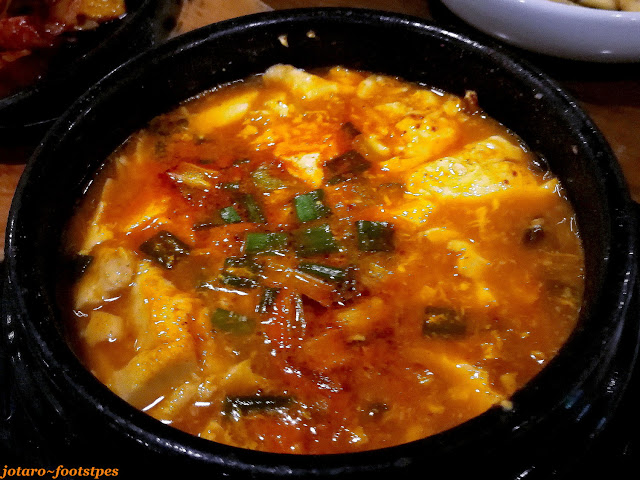 Our dinner continued with a lovely Tofu Stew Soup; It was mildly chilli hot, something easy to go with the chicken. I am not sure, but the tofu tasted unique and could possibly be made by the restaurant themselves. 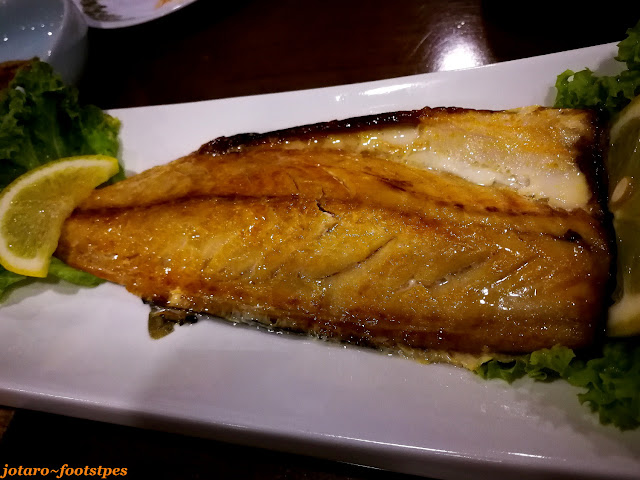 While we were touring Jeju Island on our bicycles; we had had Grilled Mackerel almost at every meal, finding them to be very tasty and fresh. On seeing that Mackerel was served on the menu, we did not hesitate to order. Unfortunately, although the fish did taste nice, it was not that fresh. 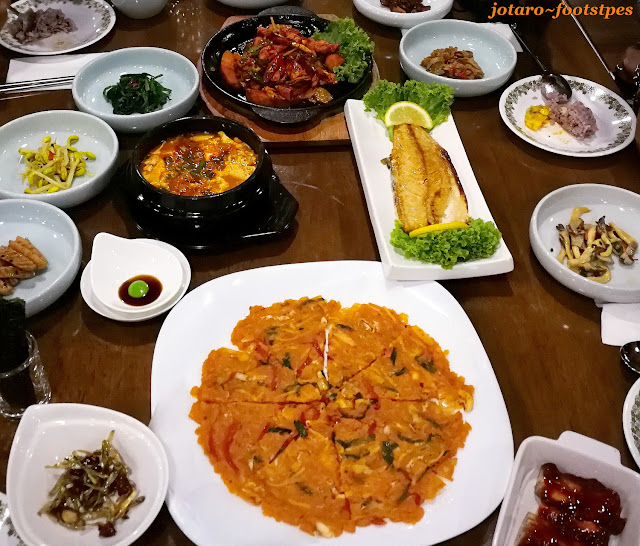 A look at our overall dinner; overall a satisfactory meal except for the fish. 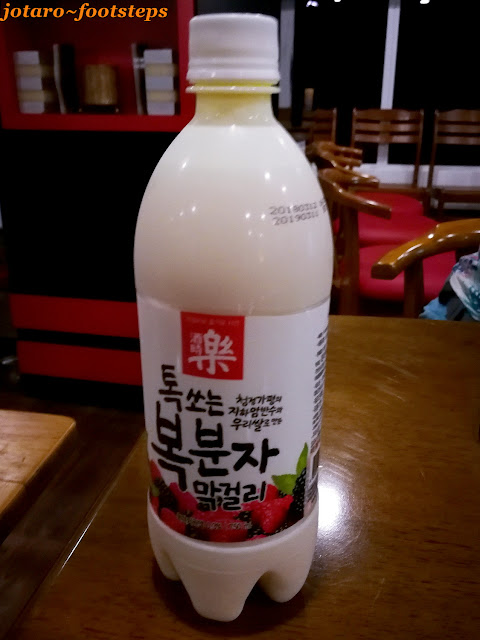 Interestingly Makgeolli (막걸리) is served here. We had politely sat at a quieter corner of the first floor and ordered this. Makgeolli is a milky, off-white and lightly sparkling rice wine has a slight viscosity that tastes slightly sweet, tangy, bitter, and astringent. 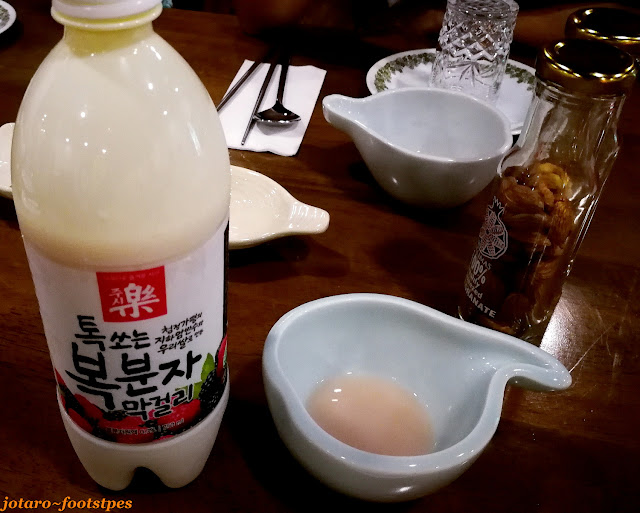 Chalky sediment gives it a cloudy appearance. As a low proof drink, it is often considered a happy, communal beverage. Served in unique peach-shaped porcelain cups, the drink went very well with roasted cashew nuts that was served compliments of the house 😋. 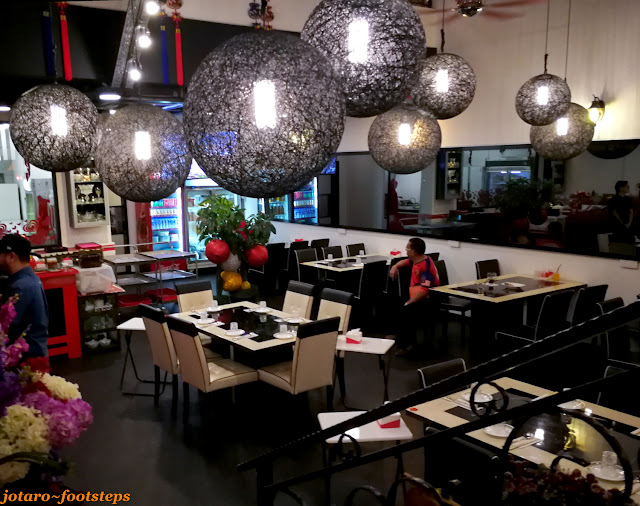 View of Korea House ground floor dining area. For those who want privacy, there is ample seating at the first floor too. 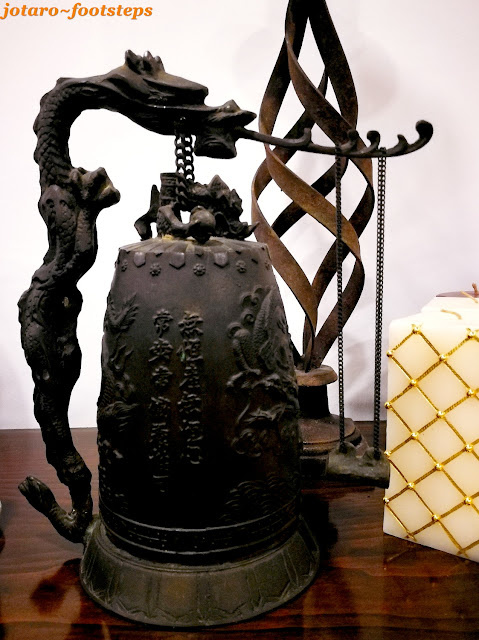 Up at the first floor, several shelves and counters had Korean antiques on display, setting a warm mood for diners. The above is a brass dragon bell. 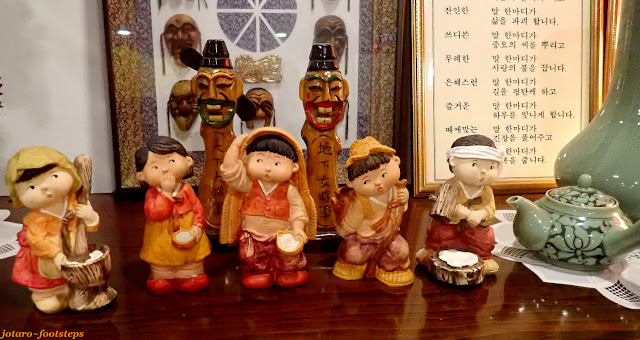 At another counter, next to a nice teapot were these cute porcelain figurines of rural Korean children. Behind them was a collection of miniature traditional Hahoetal Korean masks. 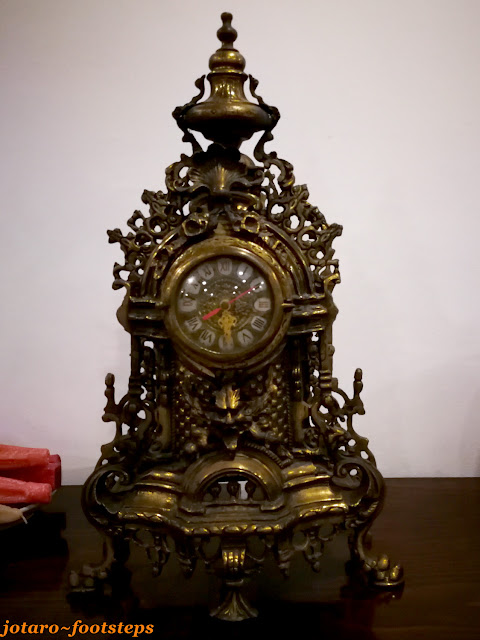 A nice antique brass clock....
which reminds us, it's time to leave. 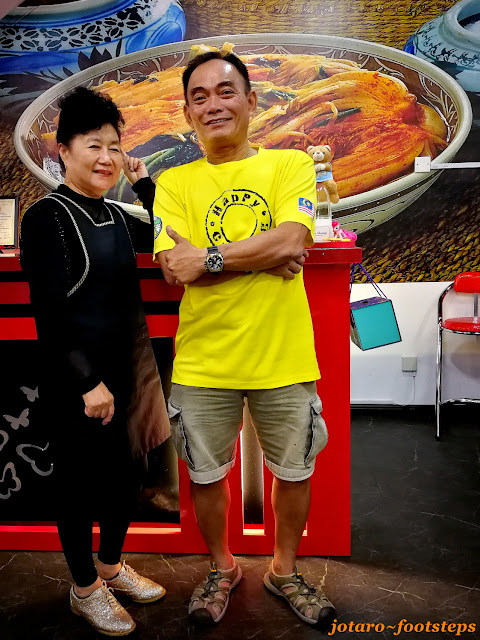 But not before saying our thanks to the manager, Mdm. Ham, a Korean who had been residing in Malaysia for almost thirty years.