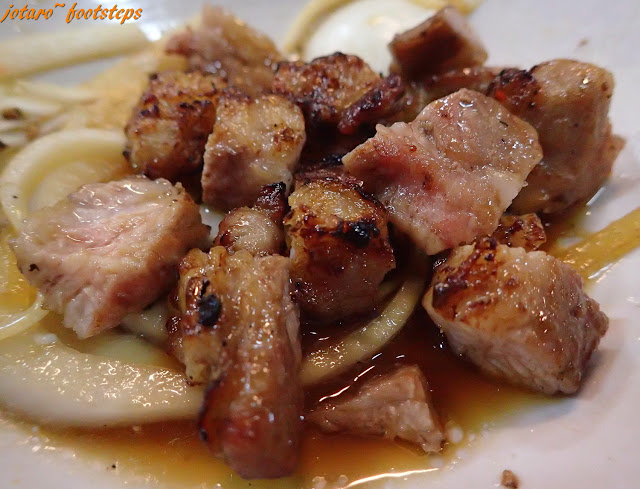 Sehwa-ri, Jeju Island, South Korea - March 2017
Jeju is renown for it's Black Pork (제주흑돼지/jeju heuk-doe-ji), pork from the Jeju Black Pigs reared at the farms on the island. These are smallish pigs with black skin and a smooth coat of hair. This domesticated pig is suppose to have a distinct taste with a chewier meat. Traditionally the pork is smoked over burning hay, allowing the smoke to penetrate the meat juices. We did not get to try this hay-smoked version, but while on a cycling tour of Jeju Island we did get to savour barbecued Black Pork. Did it stand up to it's reputation? Let's find out. 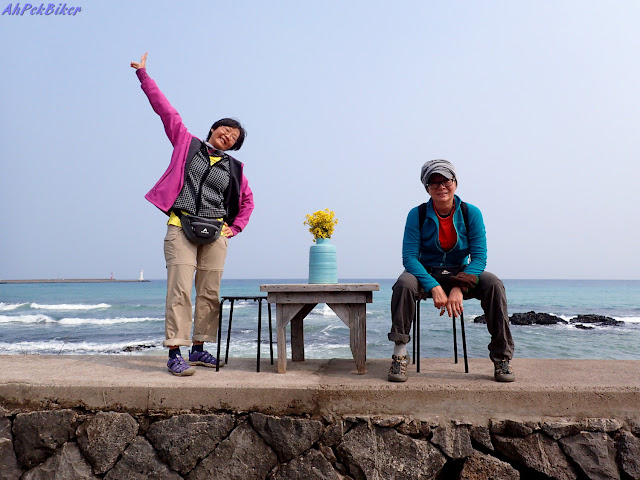 Days earlier, we had had some Black Pork at the Black Pork Street in Jeju City. That first impression wasn't a good one of this famous dish. The one we had was from one of the more renown restaurant there; we found it to be tough (almost like wild boar) and not having any particuclarly special taste. Fortunately, later on we perchance tried this dish again, one which was better and definitely representative of good Black Pork.
We were on our last leg of our round-Jeju cycling tour and had stopped for the night at the twin towns of Sehwa-ri and Hado-ri. These towns should not be missed if one is at Jeju Island, they are small yet charming towns and quiet with friendly people.
Sehwa-ri located about thirty kilometres from Jeju City has a nice sea front. On the walls of the beach, enterprising locals have placed cut tables with vases of flowers. These successfully tempt visitors to stop and take memorable photos, which will in turn lead them to patronising those shops. 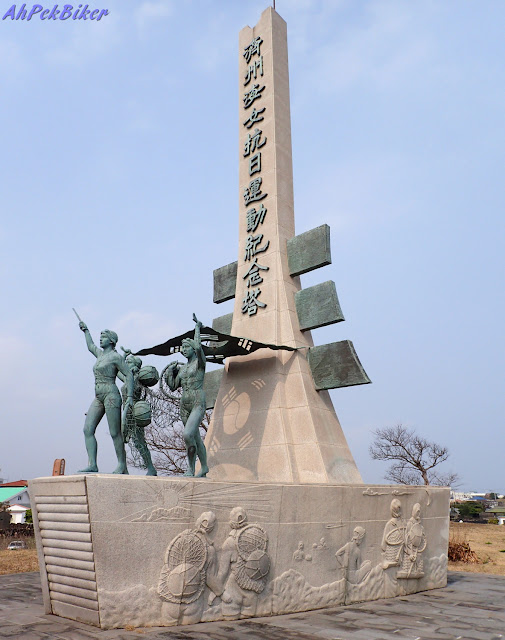 About another five kilometre away is Hado-ri, a smaller town in a quiet farming hamlet. Here one will find the Jeju Haenyeo Museum (해녀박물관), a museum dedicated to the Haenyeo, the strong lady divers of the island. The museum show their history, their culture and there are even life-sized diorama of their houses, etc.
We were staying at the Manjo House in Hado-ri where they have colourful and very cosy chalets. Come dinner time, we rode fifteen minutes over to the Hala Pork Restaurant (in Sehwa-ri) which is also operated by our homestay owner. 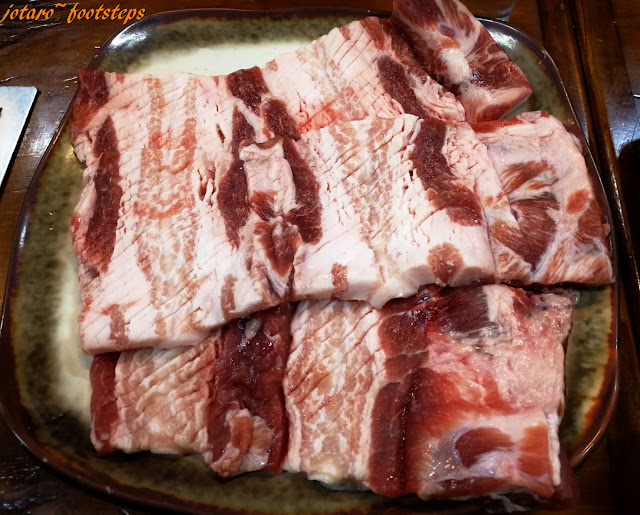 Let's have a look at what we ate. Besides the usual soup, rice and Banchan we ordered some of the house specialty - Jeju Black Pork!
We had two cuts, the above is their pork belly that came in generous half-inch thick with vertical slits sliced half way through, this will make them easier to cook and to cut after cooking. 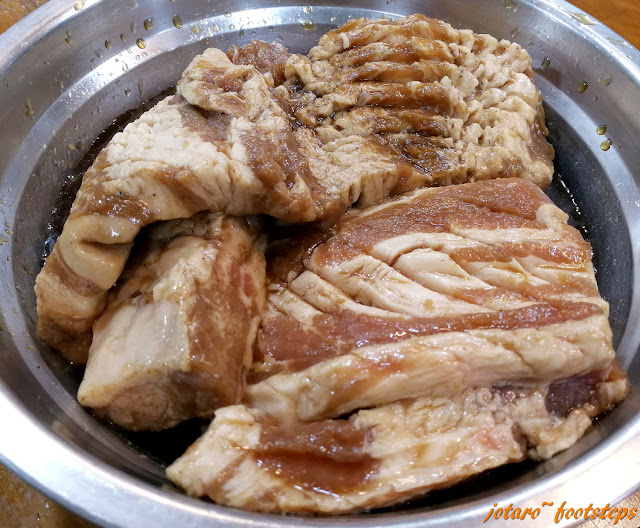 This is the Pork Neck, coming in thicker slabs with more fat and deeper slice cuts into them. Unlike the pork belly, these have been seasoned with some spices.
WE HAVE BEEN SERVED! 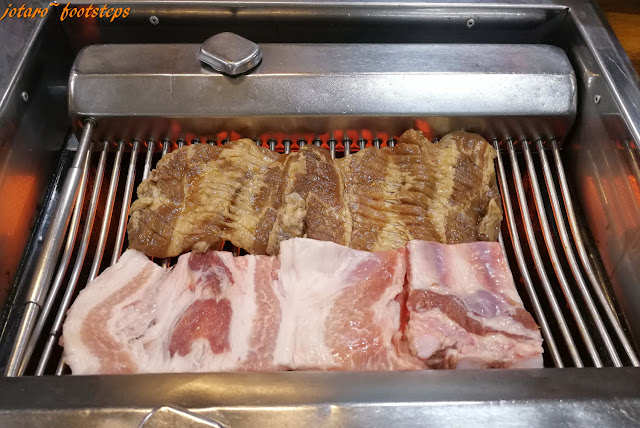 In these modern days restaurant, cooking is not over hay fire but on stainless steel grilles. We put cuts of both meat onto the grille and slowly cooked them, every once a while turning them over with large pincer that were provided. 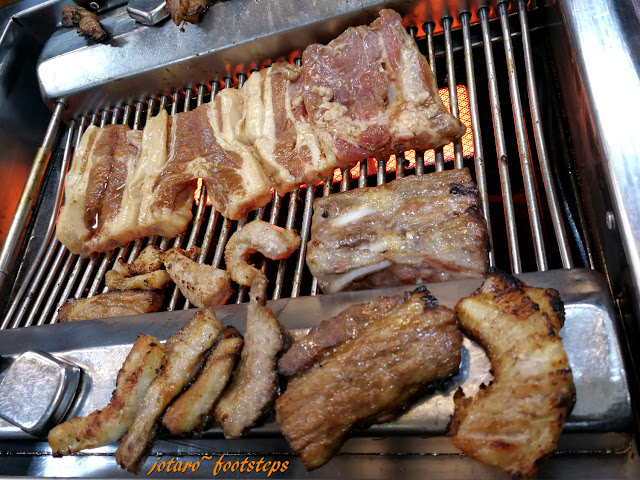 Now the trick is not to be tempted to over-cook the meat. Probably two minutes on each side would be good. Large scissors are also provided to cut the meat into manageable pieces. At both sides of the grille are elevated flat sections where we could put cooked meat on them to keep them warm and also to drip off any excess oil. 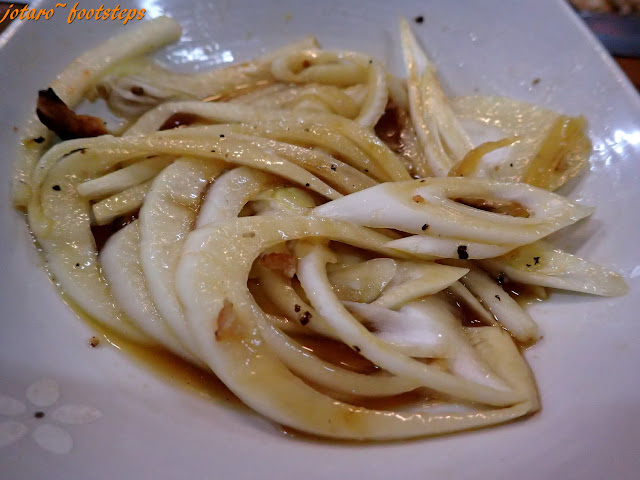 Each of us was  provided with large saucers served with a soy-sauce/vinegar sauce mix. Into this we put cuts of large onions peppered with some black sesame. The mix softened the onion slightly and it turned out almost as good as the ones we had at the Gojipbultong Restaurant in Insadong, Seoul. 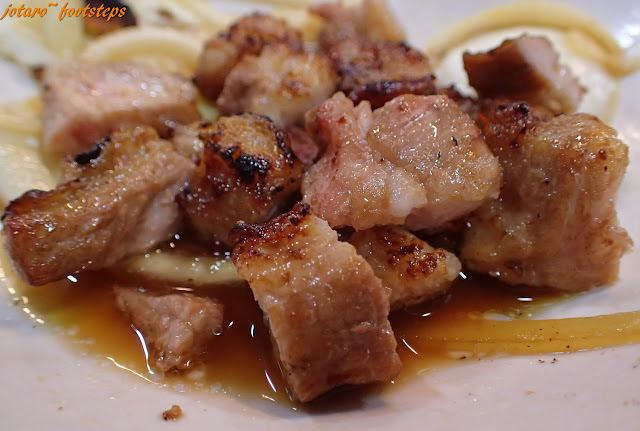 Now how do we eat Black Pork. Some of us had small cube cuts put into the saucers, dipped them into the sauce and ate them with the onions. 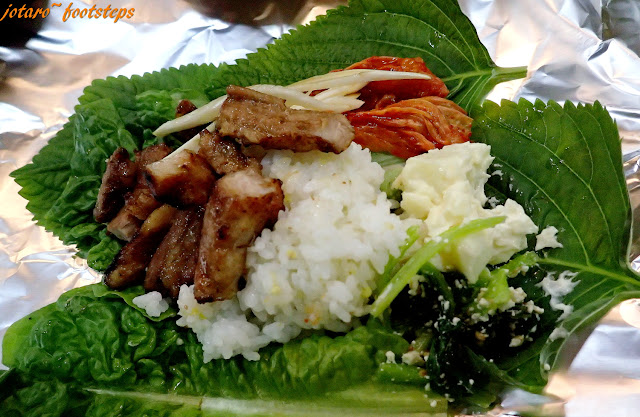 OR have them wrapped up in Pirella leaves together with some rice and Banchan and eat them ssam style; whichever way the meat was savoury and tasty; tender yet chewey. 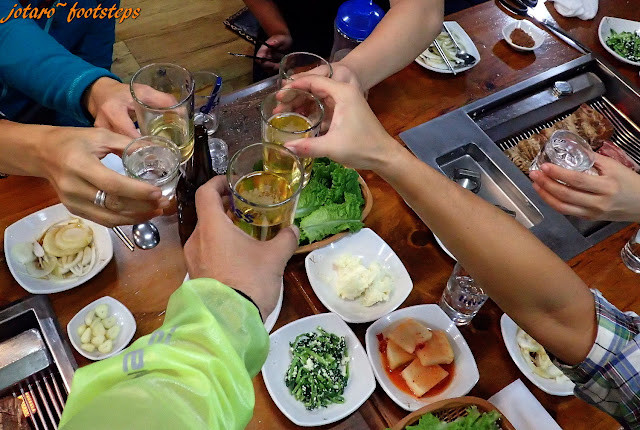 CHEERS!
It was a good meal which totally changed our opinion of Black Pork; Halla Pork Restaurant is definitely the place to savour Black Pork when in Jeju Island. In fact many drive over from Jeju City to patronise this place, it's that good.

You are at - Jotaro's Blog / FootSteps / YummY! / Korea 2017 - Korean Food / Good Jeju Black Pork (제주흑돼지) @ Sehwa-ri Jeju Island
If you like this, view my other blogs at Jotaro's Blog
(comments most welcomed. if you like this pls share via facebook or twitter)
Posted by Jotaro Zen at 8:20 PM