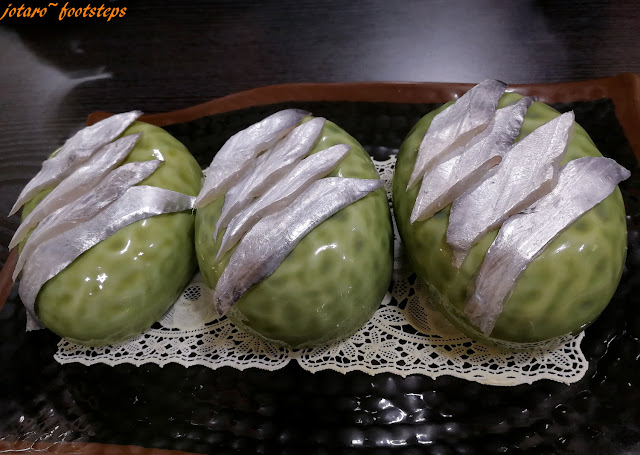 Seongsan Ilculbong, Seongsan-ri, Jeju Island, South Korea - March 2017
We were on a round Jeju Island cycling tour, and one important stop was Seongsan where there is a Korean Cycling Passport Station and nearby is the famed Seongsan Ilchulbong Peak. Most will stop near the port that ferry people over to Udo Island for lunch. There are many seafood restaurant here; we had ours at Hyundai Restaurant which serves Korean-style Sashimi.
The photo above is that of the Sliced Raw Silver Hairtail Fish. 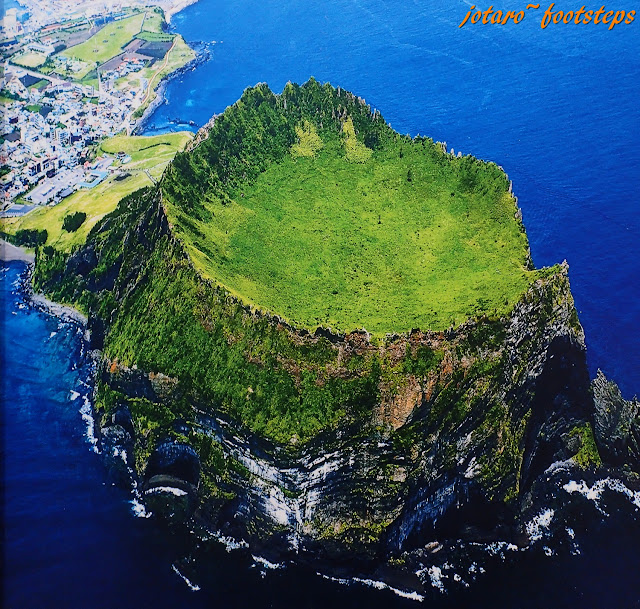 Short of time we did not get to visit the Seongsan Ilchulbong Peak. It's a extinct volcano with a green plateau within it's crater. But eating at the Hyundai Restaurant was one which was also a culnirary lesson in Korean Food. Read on to learn something about it too. 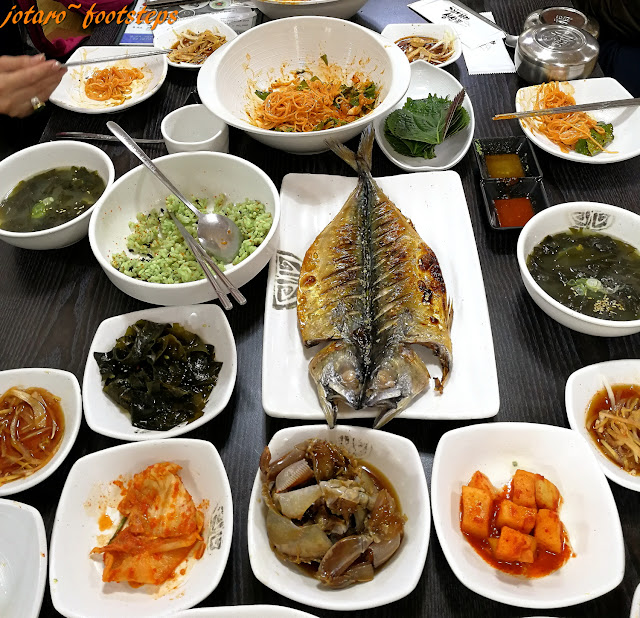 A view of what we ate, we will come to details later on:
Top centre is raw fish noodle.
The greenish dish at the second row is Wasabe Rice, next to it is Salt Grilled Mackerel, and one the left is Abalone Seaweed Soup.
Centre bottom row is Raw Crab Marinated in Soy Sauce. Other small dishes around are Banchan, Korean side dishes that comes with the main course.
Not shown in this photo are the raw fish, which will be show as we go along. 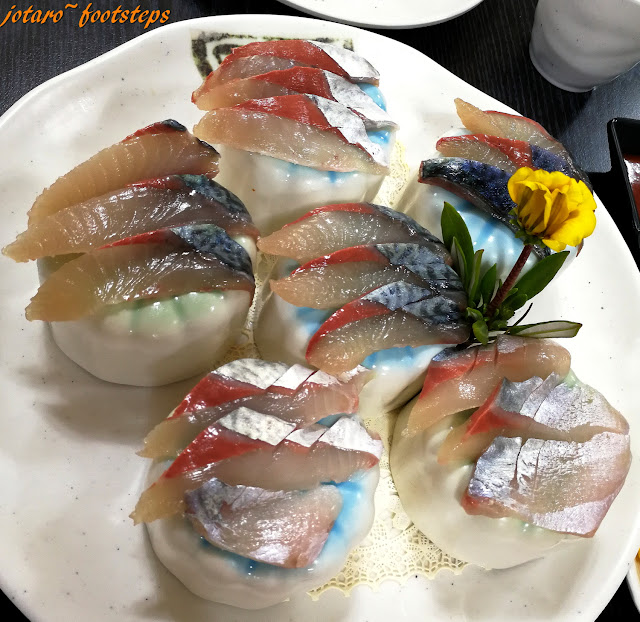 We kicked off with this nicely presented Slice Raw Mackerel, called in Korean Godeungeo-hoe (고등어회). Gudeungeo is Mackerel and the suffix hoe means raw.
This raw fish was very fresh and slightly sweet. 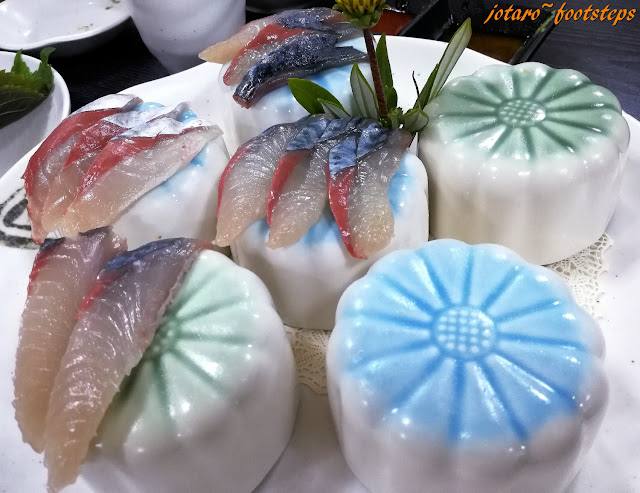 The raw fish were sliced and laid out onto these glazed porcelain holders with flowery patterns on top. I had initially thought that they were some kind of jelly (Greedy me, hahah!). 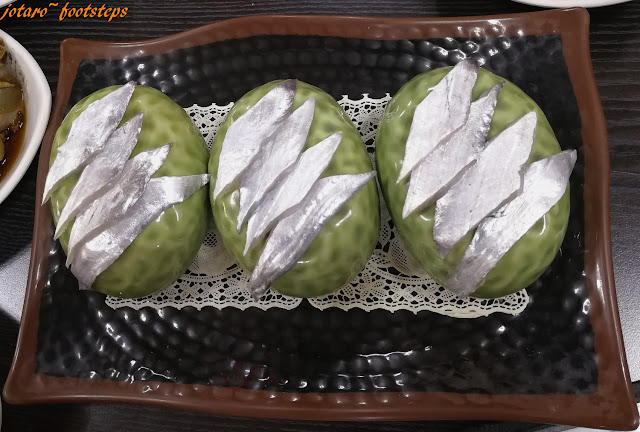 Next was small slices of Raw Small Silver Hairtail Fish called Galchi-hoe (갈치). These were really thin slices. Both the raw fish did not come in large quantities and eating them by themselves would not make a full meal. 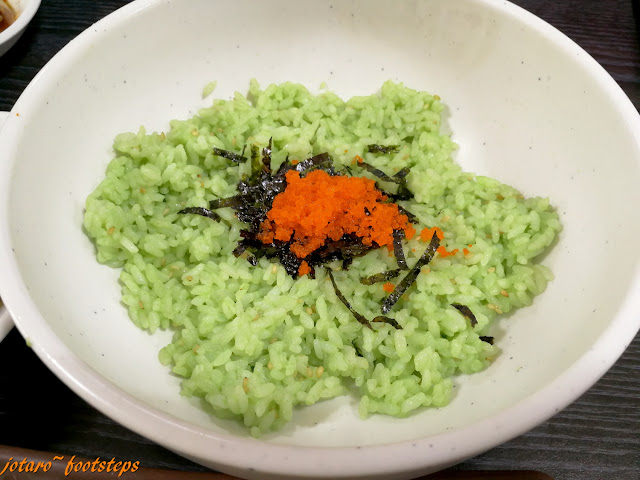 Fortunatley, the meal came with a couple of bowls of Wasabi Rice topped with shreds of Mareun-miyeok, dried seaweed (마른미역); and Tobiko (Flying Fish Roe). But then....  there we were, greenhorns in eating Korean Sashimi were wondering how we should be eating these. 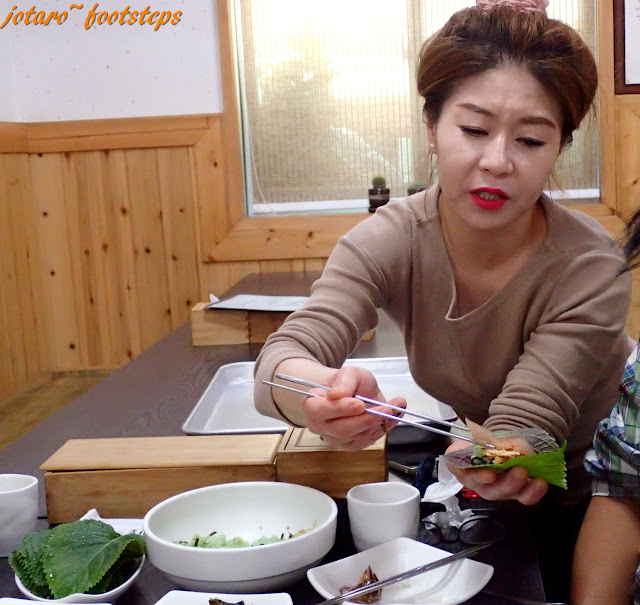 Luckily, one of the owners (a pretty Korean lady) saw our predicament and came around showing us how to eat. I was paying full attention to her instruction but at the same time stealing glances at her pretty face... Heh heh! 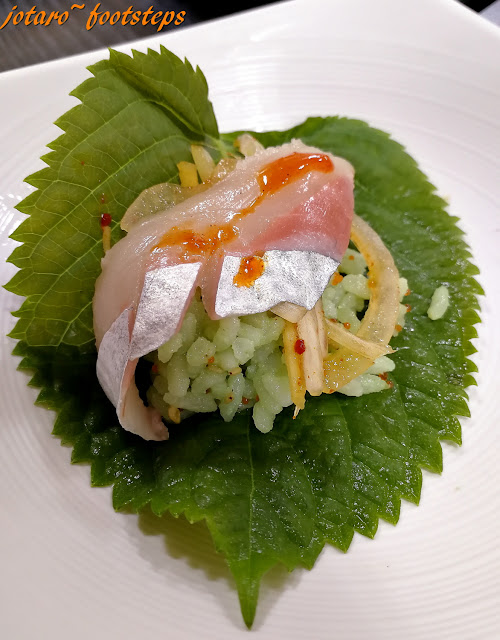 The trick is to lay out the Wasabi Rice onto the provided Pirella Leaves, put some Banchan and top these with some of the raw fish; and them roll the whole thing up to be eaten Ssam-style!
Nifty yah? 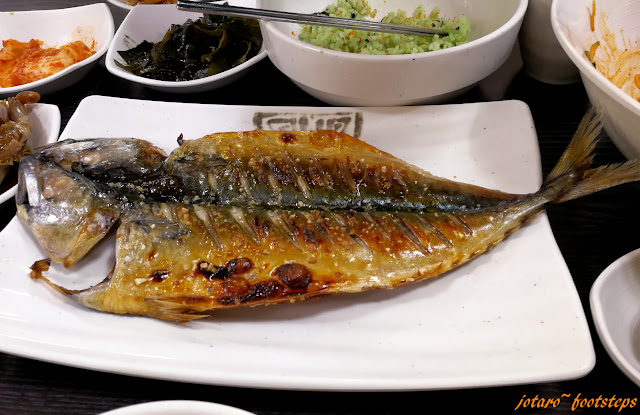 Thsi is the Salt Grilled Mackerel, Godeungeo-gui (고등어구이). The ones served here were very fresh, but I would had liked it more if it was cooked caramelised-style . 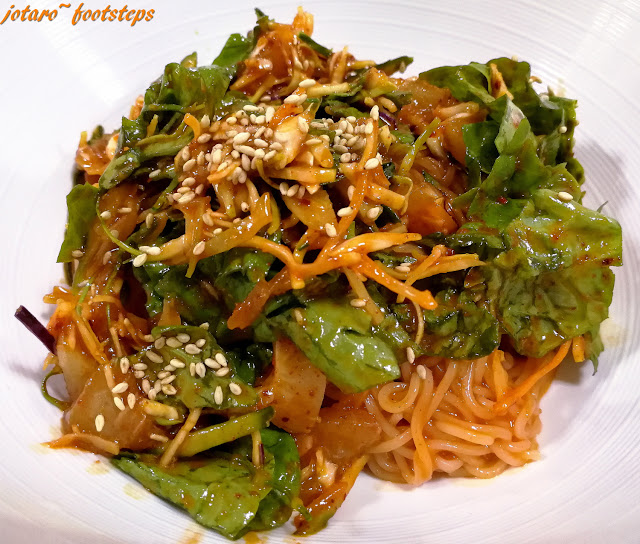 The Hoe-guksu Raw Fish Noodles (in full it's called Hoeguksu Halmaejip, 회국수할매집)  came with slices of raw fish (of course), shreds of greens and top with slices of carrots and a sprinkling of sesame seeds. The whole dish was stirred with some kimchi sauce that was not to spicy or sourish, in fact it had a nice sweet based. I like this noodles very much. 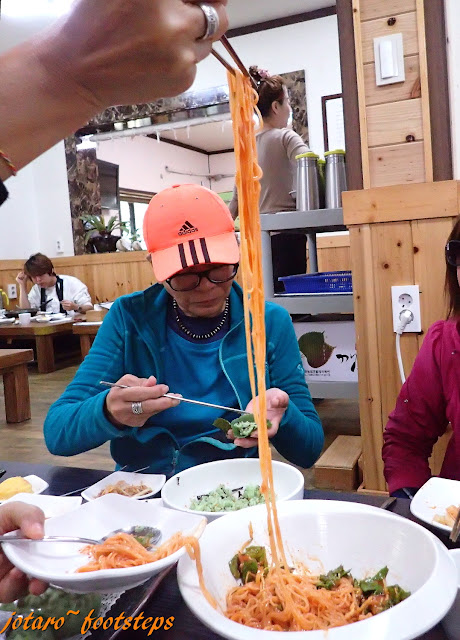 Oodles of noodles stretched very long to be served to individual plates. 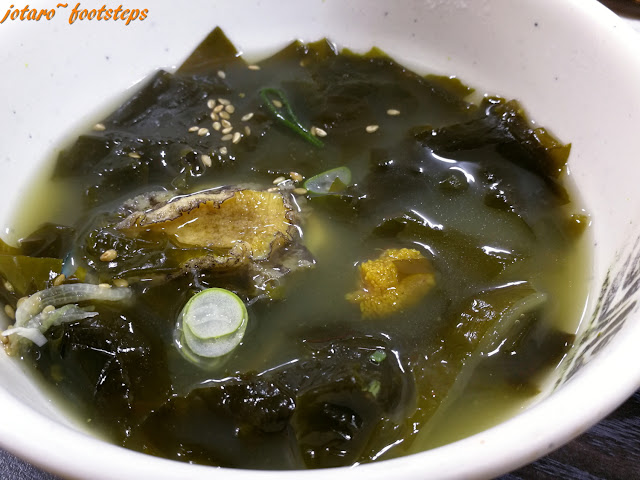 The Abalone Seaweed Soup (Jeonbok Miyeok-suk , 전복미역국) came with loads of seaweed and fresh abalone (Jeonbok, 전복). With a combo of salty seaweed and sweet abalone, it was a very tasty and good soup. 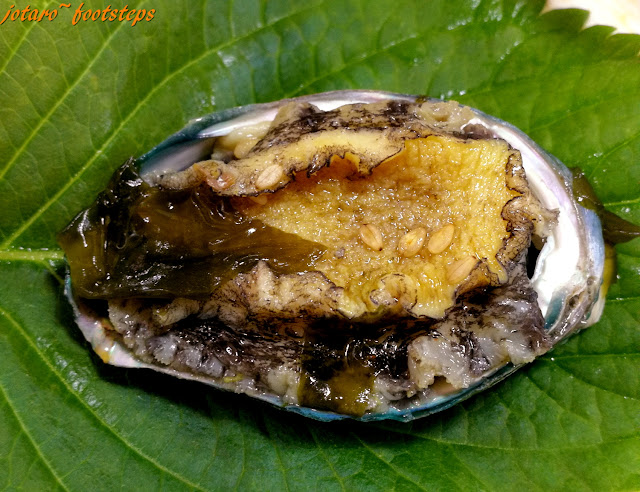 The abalone (Jeonbok, 전복) was very fresh, and cooked together with their shells. 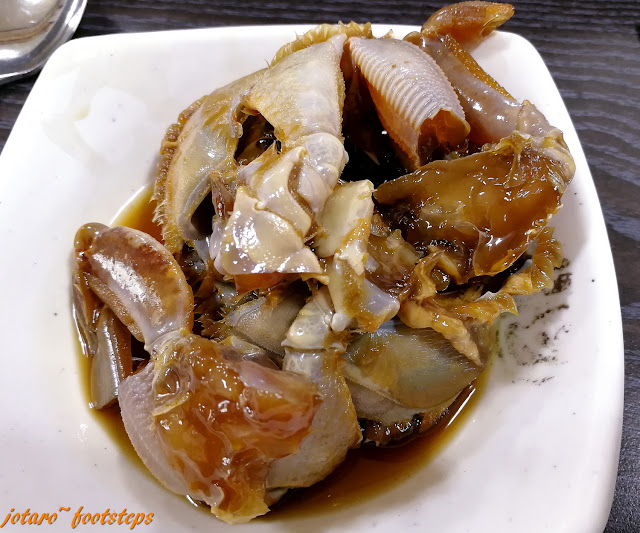 This Raw Crab Marinated in Soy Sauce (Ganjang-Gejang, 간장게) was one dish most of us dare not savour, it was really alien looking to us. 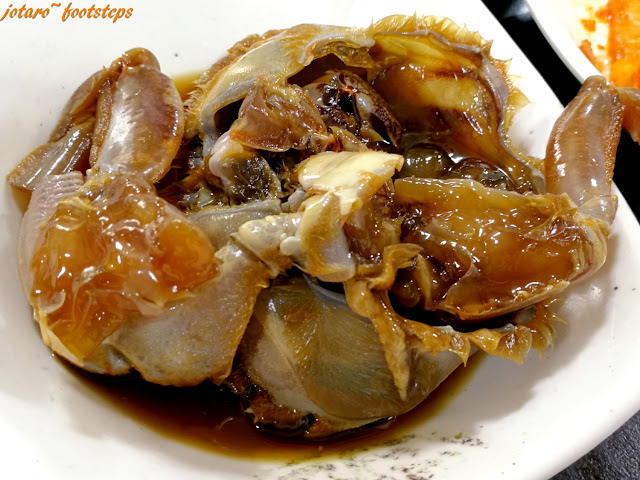 Another look at the alien (Ganjang-Gejang (간장게). Fenn did try it, took one mouth said it had an odd taste and then did not continue on. Urghs....)

Below are Hyundai's Sashimi Restaurant's menus together with their pricing: 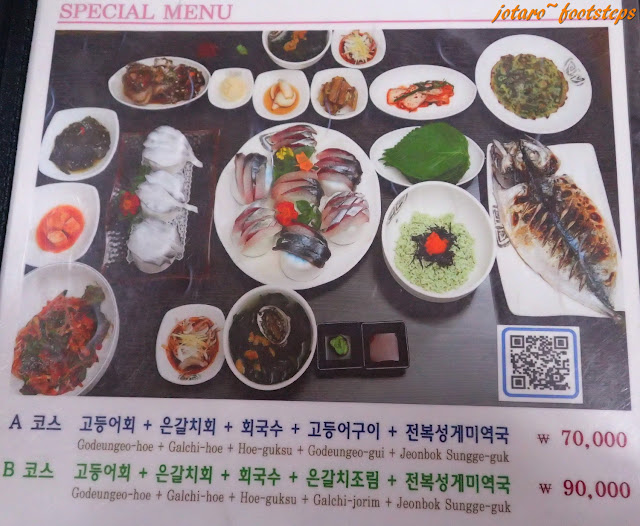 Their special menu, Menu A is for two pax, and Menu B is for three pax. This was what we went for, one of each for the seven of us. 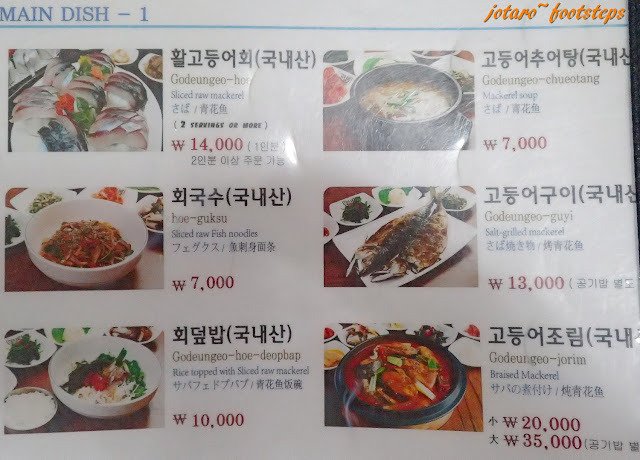 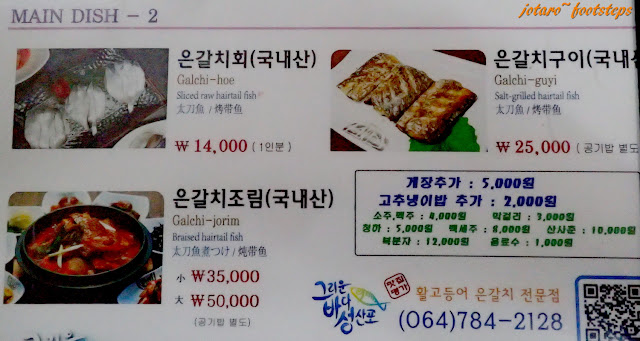 The Main Dish Menu 3, a couple of abalone and sea urchin dishes. 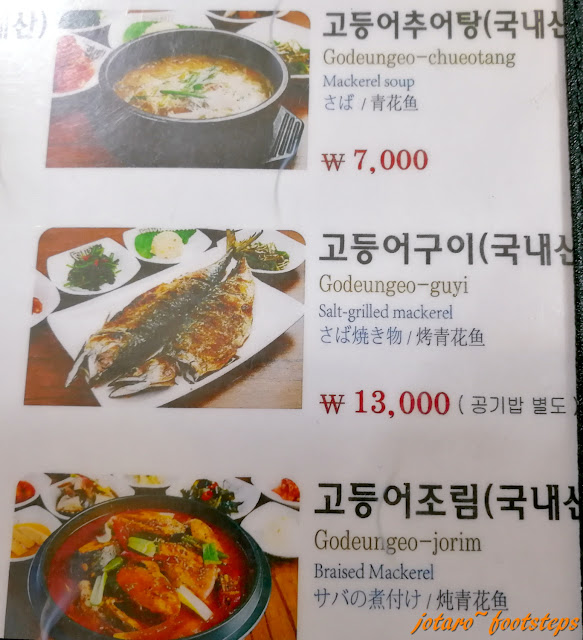 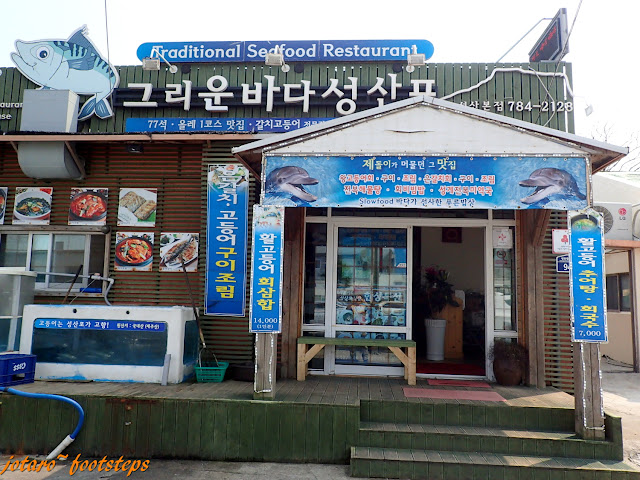 Their shopfront advertised themselves as a Slow Food place servining traditional seafood. I think they meant say eat at a leisurely pace 😆. 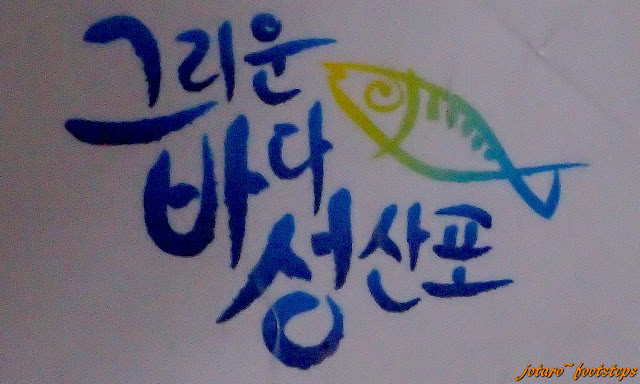 
You are at - Jotaro's Blog / FootSteps / YummY! / Korea 2017 - Korean Food / Authentic Korean Sashimi @ Seongsan-ri Jeju Island
If you like this, view my other blogs at Jotaro's Blog
(comments most welcomed. if you like this pls share via facebook or twitter)
Posted by Jotaro Zen at 5:18 AM