This Royal Palace was built in was constructed in 1866. The original buildings were made of wood but were slowly replaced by masonry over time. The first Royal Palace was actually in Oudong, north of Phnom Penh and was built in 1434. Below is my account of my visit to this magnificent site. 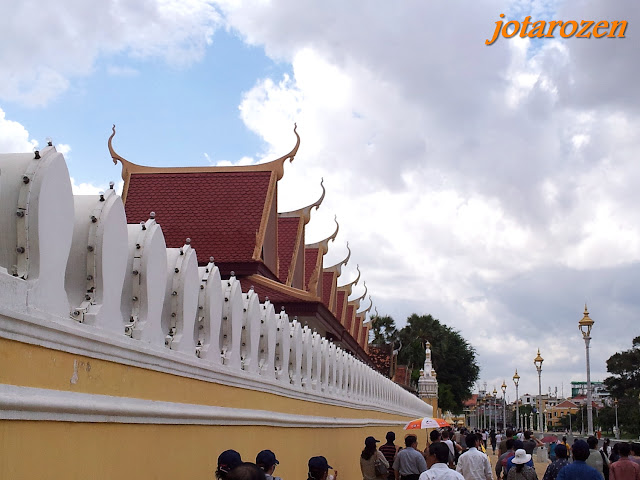 The weather was friendly, cloudy but not raining. Good for walking but bad for photography. Together with other tourists I took a leisurely 300m stroll to the entrance of the Royal Palace, along the way admiring the mini-roofs over the perimeter wall. 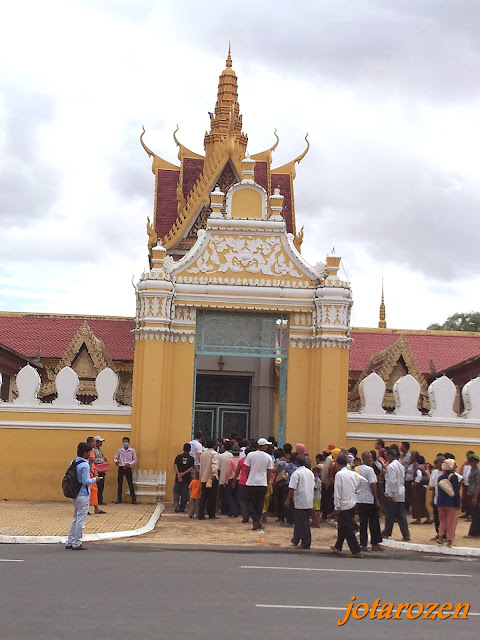 At the entrance, there was a simple but elaborate archway, with a small intricate roof behind. Many tourists from all over the world and Cambodians from the provinces were already queuing up to gain entry. 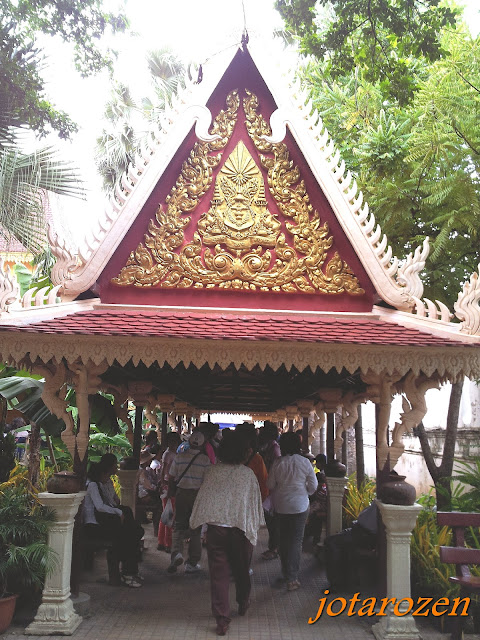 Inside, the crowd was even thicker, there was some jostling. But I made my way along the corridor leading to the ticket booths.


While waiting to by the ticket, I viewed a large map next to the booths. It showed the various buildings, stupas, small museums, etc. It also showed prohibited areas, the areas open for public viewing  is only slightly larger than half of the overall palace. 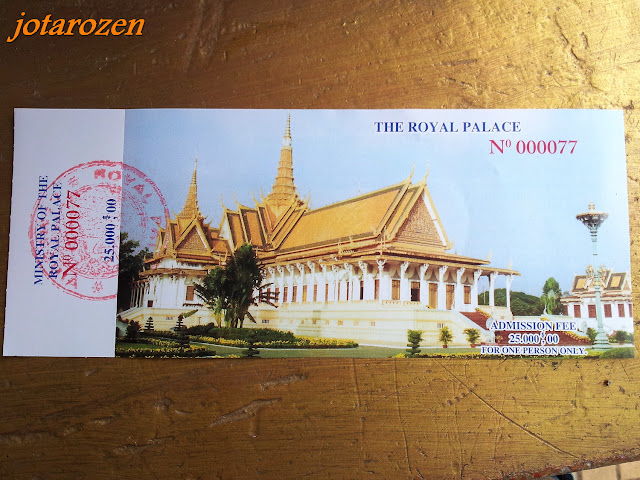 The entrance cost USD6-25, with the ticket showing a perspective view of the Royal Palace Building proper. 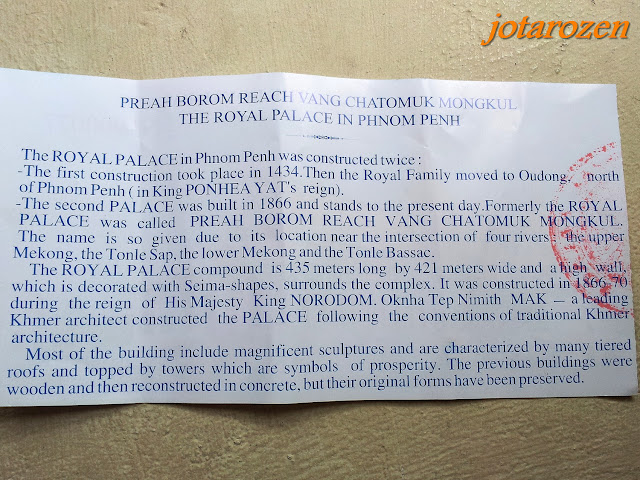 The rear of the ticket gives a write-up of the palace, that it was constructed twice, starting from 1434. It mentions the size of the palace complex, the type of architecture involved and the naming of the palace. Originally, the palace was of timber construction but was slowly replaced by concrete buildings. 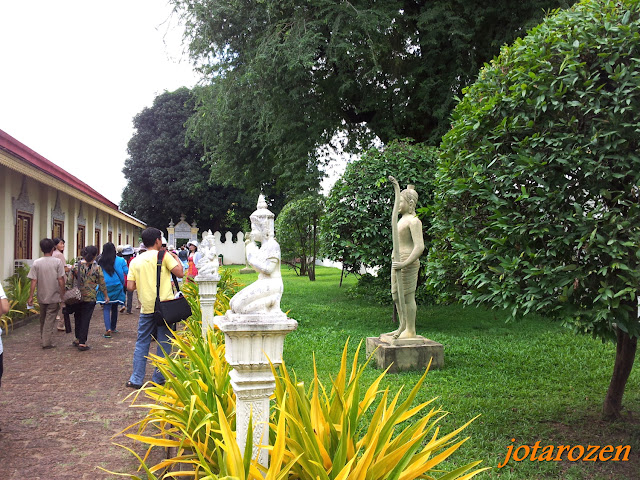 We had actually entered the complex by a secondary front entrance, the main entrance of course is reserved for the king. So to get to the palace proper, we had to walk through this landscaped walk-way adorned with statues. 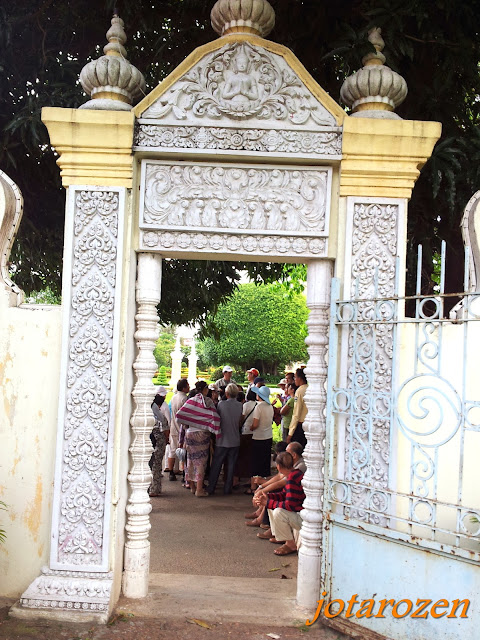 And through this nice, little doorway. 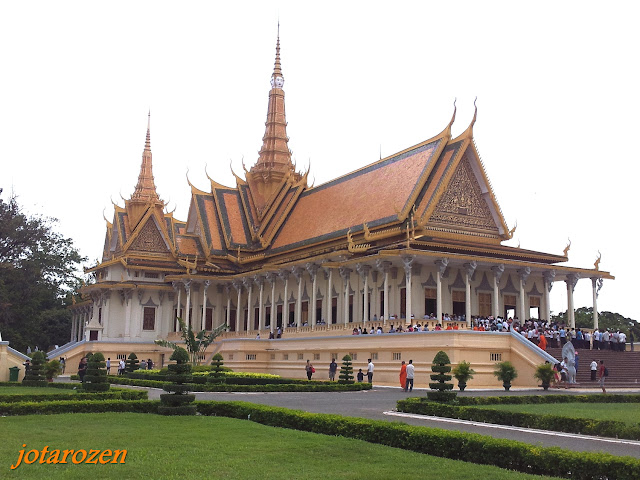 The little unassuming doorway opened up to this magnificent view of the palace building. An imposing building sitting on a platform twenty feet above the grounds, making it an imposing sight.


It is a T-shaped building with a beautiful multi-tiered roof held up by many columns. On top are three stupas. A grand staircase led up to the palace platform. 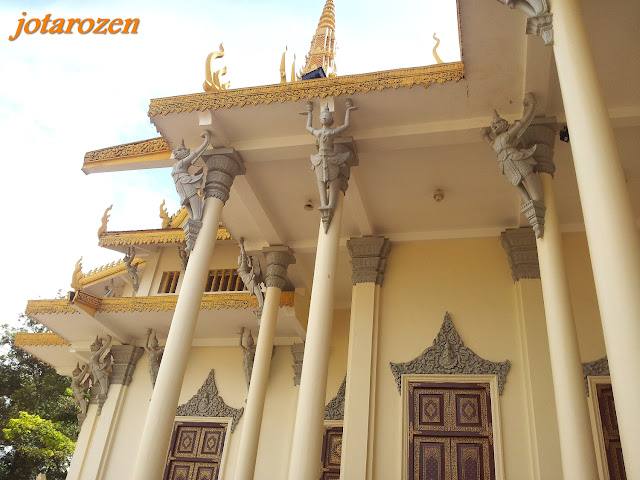 The top of the externals columns were adorned with sculptures of asparas (Khmer angels), hands help up high "holding up the roof". 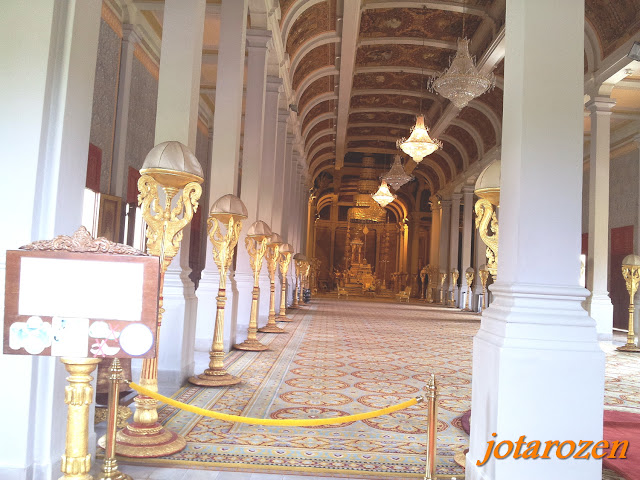 No pictures were allowed to be taken of the internal of the palace. But I quietly managed to take a few. The above, taken from the front door, shows a hallway with the throne at the far end. Nice golden lamp-stands sitting beside each column. 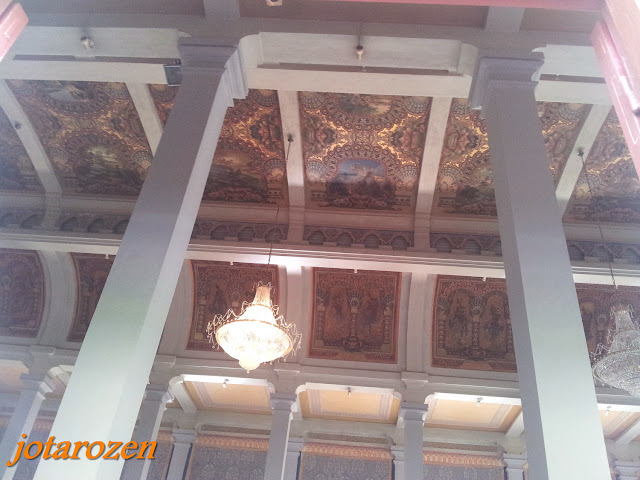 It had nicely painted ceiling with gold trimmings. 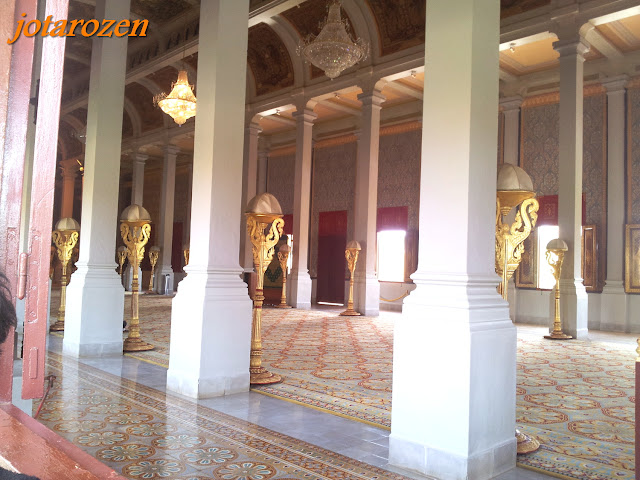 And colorful floor tiles of flowery design. Both very French-like, attributing to Cambodia's colonial French past.

Back at the front platform, I had in a breath-taking vista of the landscape grounds and ancillary buildings. 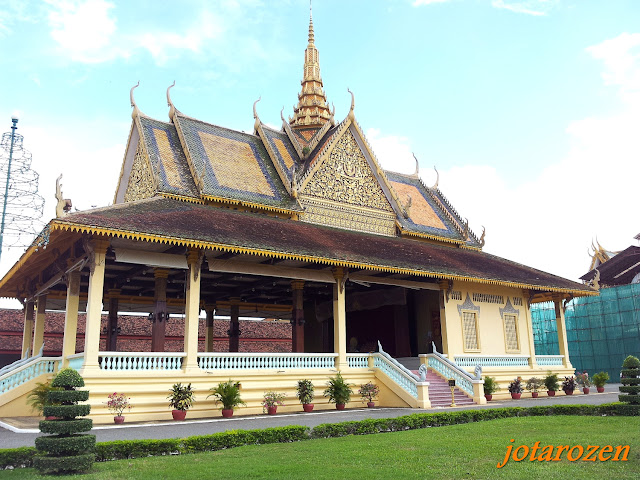 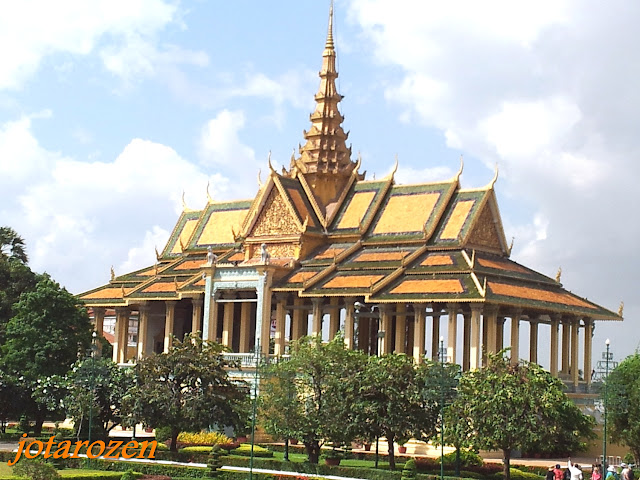 Another ancillary building, this one with beautifully colored multi-tiered roof and single stupa. 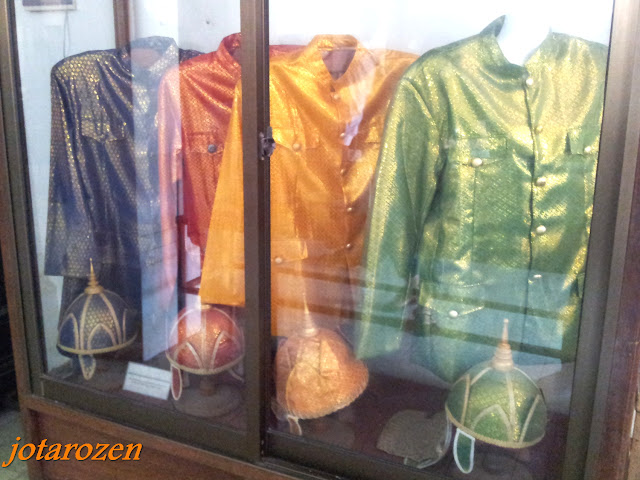 I went over to some smaller building, inside was a gallery showcasing the King's & Queen's attire, etc. The above is the King's official traditional costumes with matching crowns. 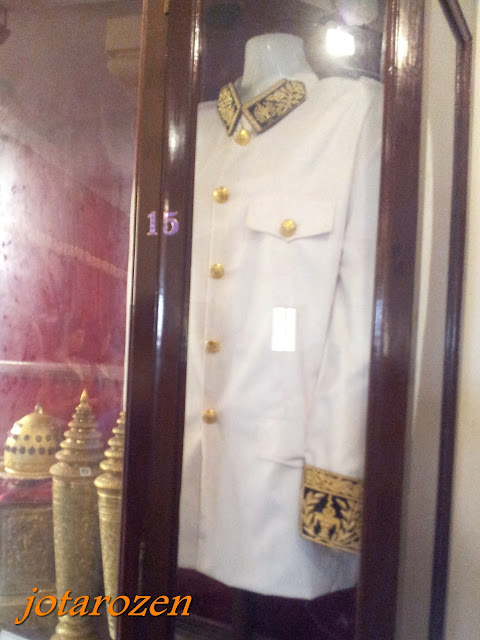 This one is one of the King's official military costume. 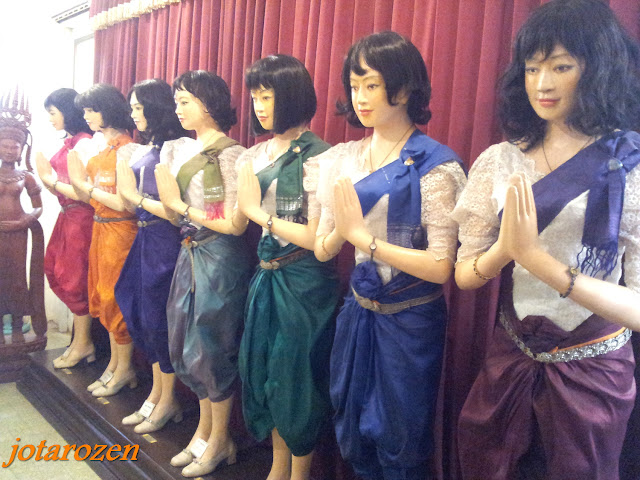 And the above, traditional Khmer ladies' costume. 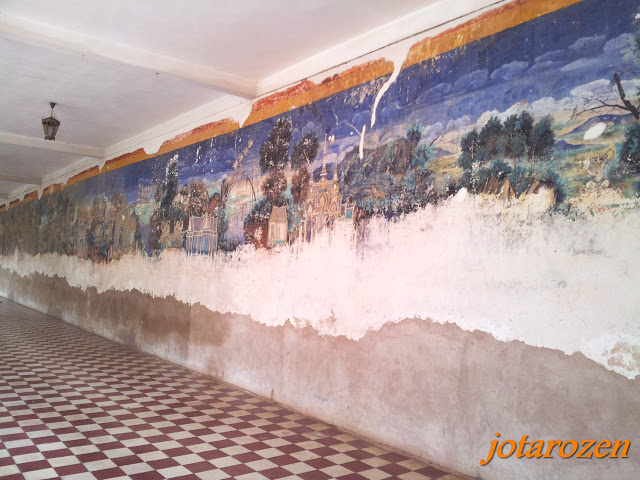 Having finished viewing the buildings at the main compound, I walked over to the Temple of the Emerald Buddha & Silver Pagoda's section, passing through this corridor with nice but eroded wall murals showing scenes of the Royal Palace.

But no to fret, in future, visitors will be able to view this mural in its glory as workers are slowly & painfully restoring them. 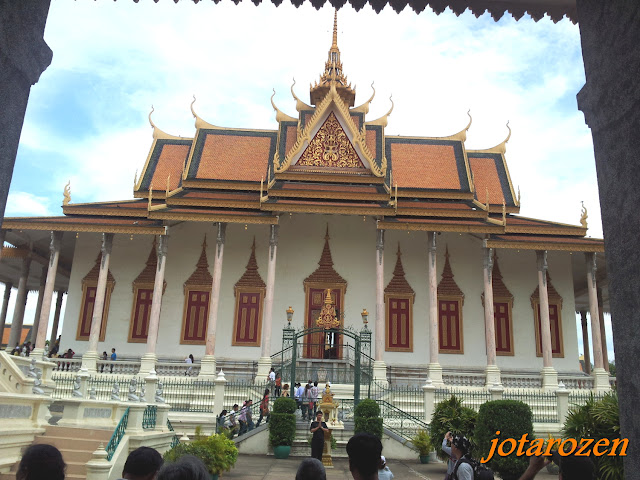 The Temple of the Emerald Buddha is another nice and balance symmetrical building, smaller but also beautiful. Unfortunately, the public cannot enter the interior. Guess it is just for the royalties to pray. 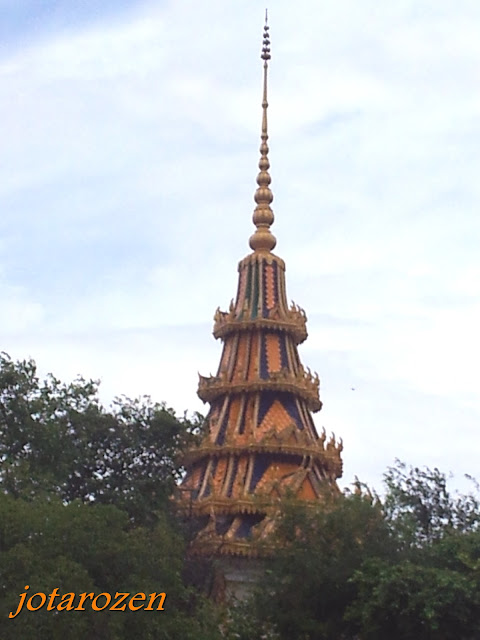 In the compound of this section is the Silver Pagoda, oddly though it looks more golden than silver. Perhaps, I am color blind.

Also in the same compounds are various stupas commemorating the royalties of past and present. They are nice structures but without color, probably a sign of humility by the royals. 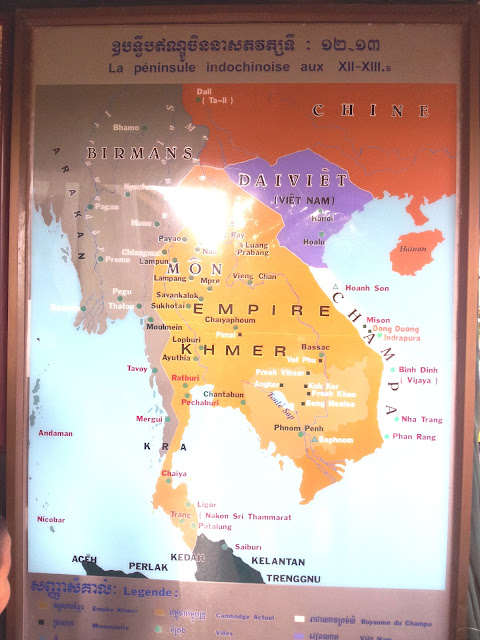 I was prepared to leave this excellent showcase of Cambodian culture and architecture, but it was not the end yet. Right at the exit are several more rooms, mostly depicting Cambodian royal culture. The map above shows the pride of the Cambodian's past showing that the Khmer republic then encompassed the whole of Thailand an reached down south to Malaya and also included most of South Vietnam. 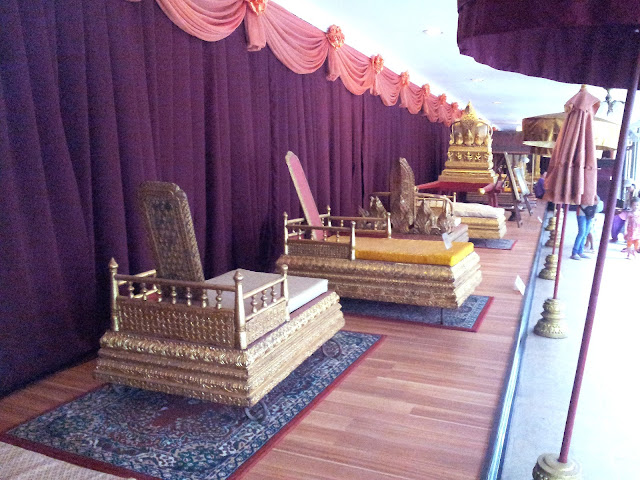 In other rooms were royal pallaquins, 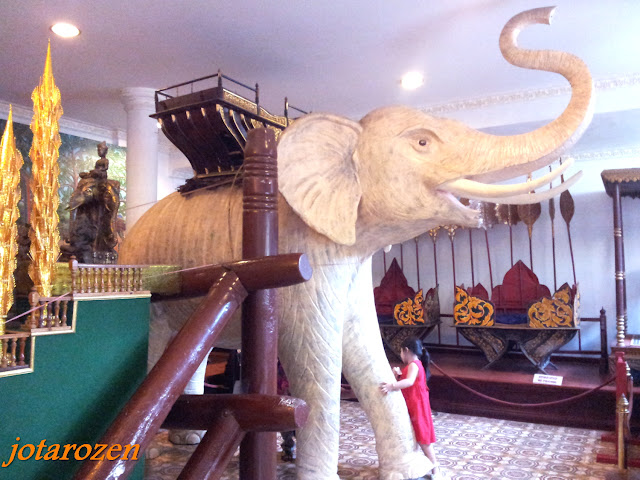 and even a pallaquin on an elephant from Khmer days of yore. 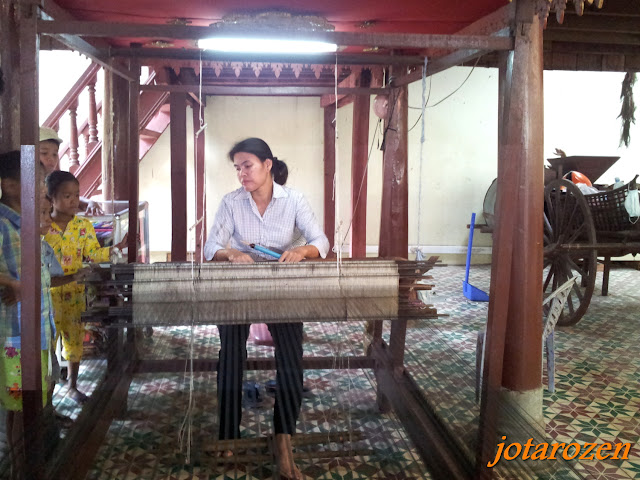 Along the exit walkway was a weaver, weaving on a traditional loom. Probably in olden days elite weavers were based in the palace to carry out weaving for the royals. 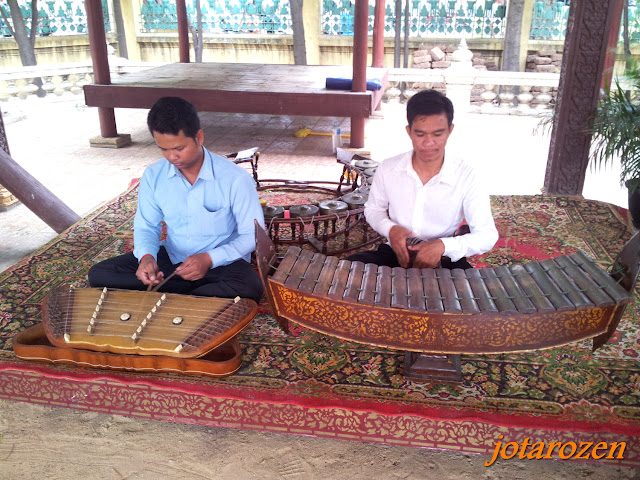 And finally to send us off and bid us farewell from the Royal Palace, were musician playing on traditional Khmer musical equipment.

The Royal Palace is located at:

(This is an extract from my Travel-blog to Phnom Penh)

You are at - Jotaro's Blog / Footsteps / Travel Sites / The Royal Palace, Phnom Penh, Cambodia
If you like this, view my other blogs at Jotaro's Blog