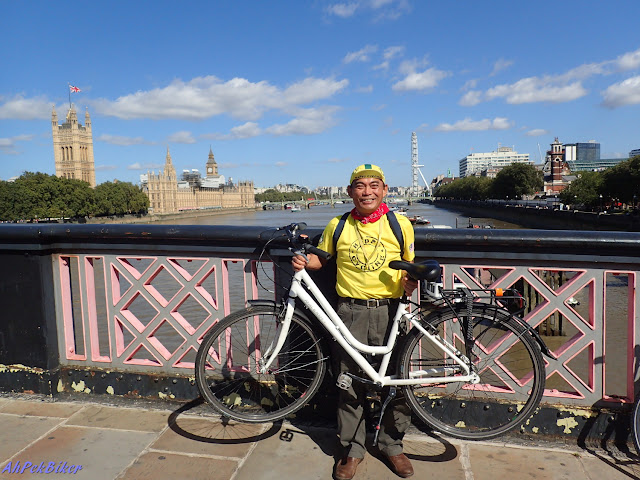 It's our fifth day in Europe and our last day in London. I left Lynn and her sister to do their own things and went.....
CYCLING! 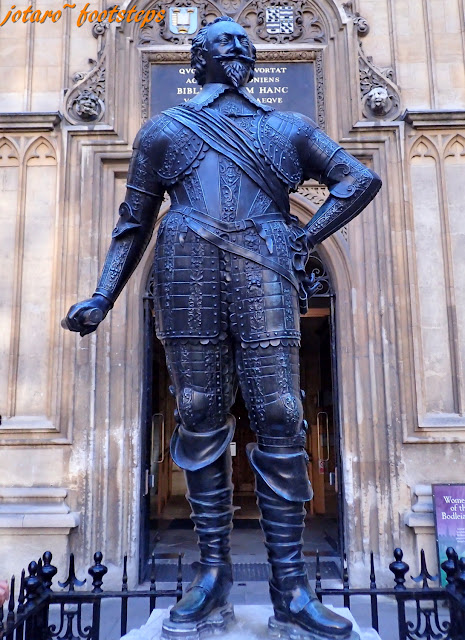 The previous day we had a great adventure visiting the rural areas beyond London. Today I leave Lynne and her sister to their own plans while I went on a cycling tour with the Cycle Tours of London - Sights of London Tour. 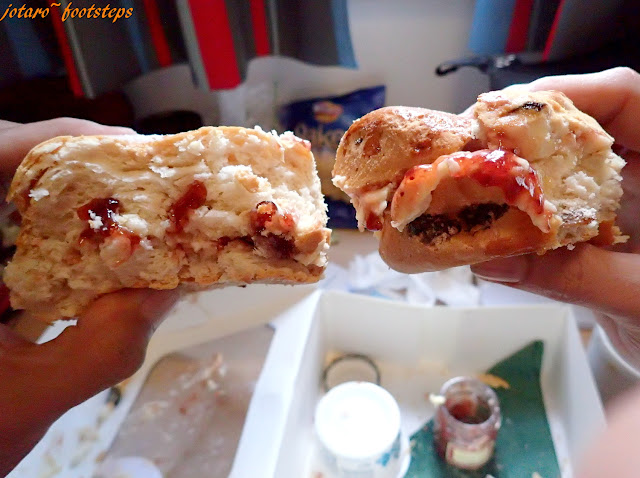 I am all exicited. Cycling is my passion and I am looking towards a new experience of cycling in London. Although it will be a guided tour, I am still all pent up with anticipation, eager to see London through the eyes of a cyclist.
I woke up early, had the scones and clotted cream which we got from Cotswolds the previous day. It was very nice as the cream went very well with strawberry jam (from "Thursday Cottage").

Boarding on of those iconic red double-decker bus (another first for me), I headed for Shoe Lane where Google Maps indicated the "Cycling Tours of London" is located. Reaching the vicinity, I walked around but could not find the shop! Even the locals here were lost about its whereabouts. Fortunately I had brought a copy of my tour booking along and had a look. Dang! Google Maps was wrong, they were now located at Bloomsbury Square! 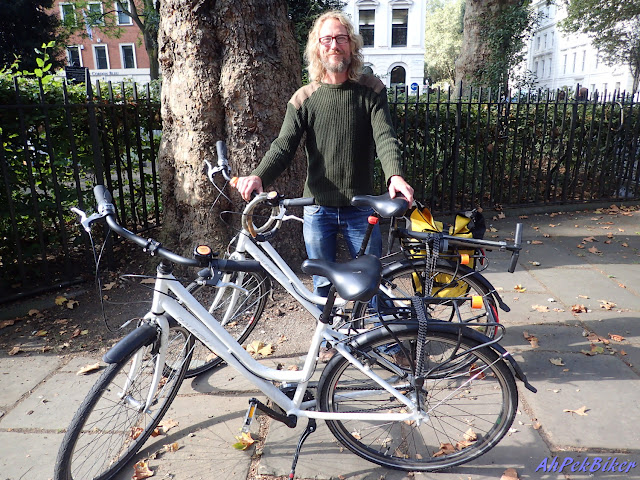 Running a bit late, I took a brisk walk (actually jog) over. Panting I saw Matthew (the cycling guide), all alone with a worried look on his face. Looks like I was the only customer for the morning ride. When he saw him, he lighted up with a smile. When I told him about my misadventure, he made a note to get Google to correct it (when I got back to Malaysia, me being a Google mapper, did correct it for him).
He had long hair, looked kind of hippy-ish, with a free-spirit air. Good, I have a kindred all to myself, even better!
Let's go riding! 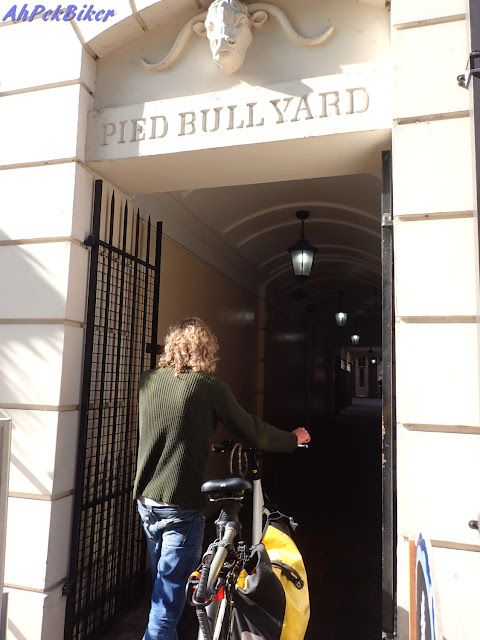 We started off with.... no cycling, but instead pushed our bikes up some stairs and through a building (the Pied Bull Yard). Hey, this is getting interesting but I better look out for the bull. 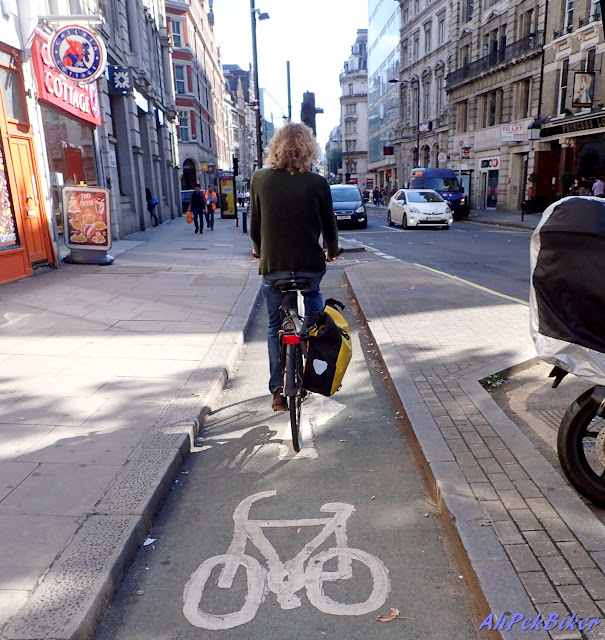 There was no bull there (Phew!) and we exited on the other side and were soon riding down a cycling lane which led to narrower streets. 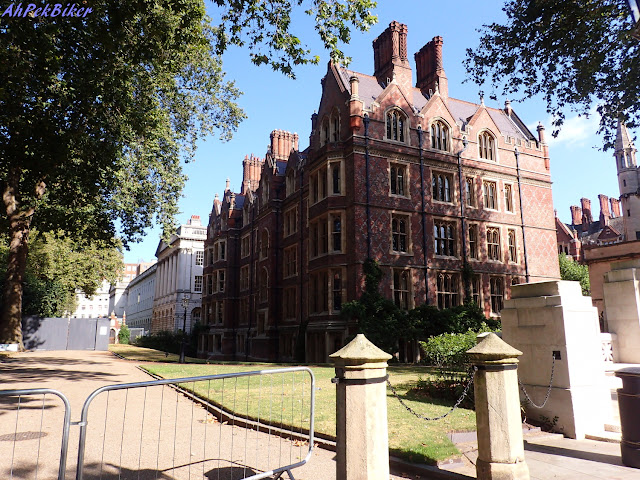 Our first destination, Lincoln's Inn. No cycling is allowed inside, so while Matt guarded the bikes I went in to have a look, with some tips on what to look out for from him.
Inside, it was fairly quiet and I wandered around the large green compound admiring the buildings, especially the Old Buildings which although not looking old are actually centuries old. The tranquil atmosphere augmented my reverence for this old institution, with thoughts of centuries of lawyers discussing and helping establish a strong English Law in these hallowed halls.
Further in and not to be missed were the vaulted archway, a beautiful piece of architecture with column lines leading up to the ceiling. Hah! Lawyers do appreciate beauty after all.

Leaving the Inn, we rode pass another legal institution - the Royal Courts of Justice situated at the Strand. Although not as old as Lincoln's Inn, it is housed in a large, impressive Victorian Gothic style grey building. 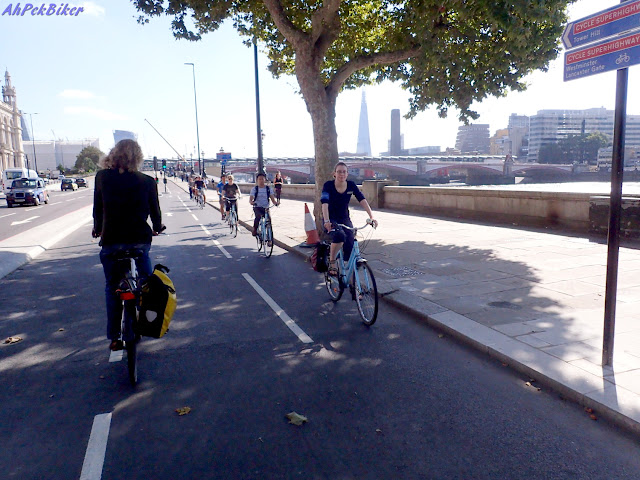 Although most of the time we were along quiet streets and narrow lanes, we did ride by busy main roads. This one above was a short stretch along the Cycle Super Highway running along the A3211 throughway next to the Thames. London has several of this cycle superhighways which allow cycling commuters to ride in and out from the suburbs. 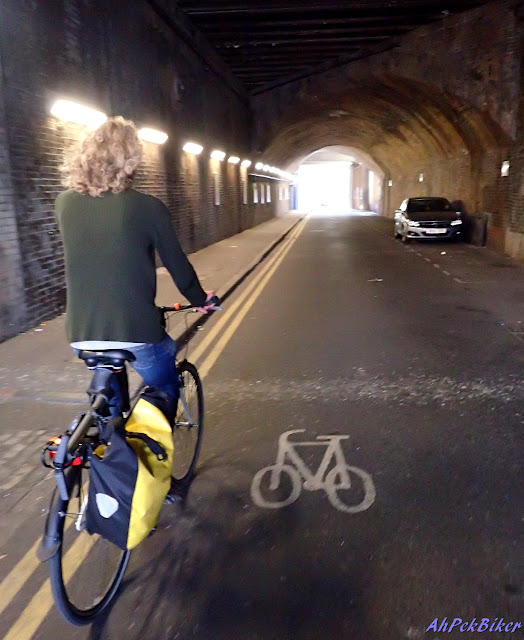 It's the quiet streets that I love most; almost devoid of traffic, lined with bricked houses and small parks. We even went into tunnels running below the railway tracks, every once a while hearing the rumbling of trains above. 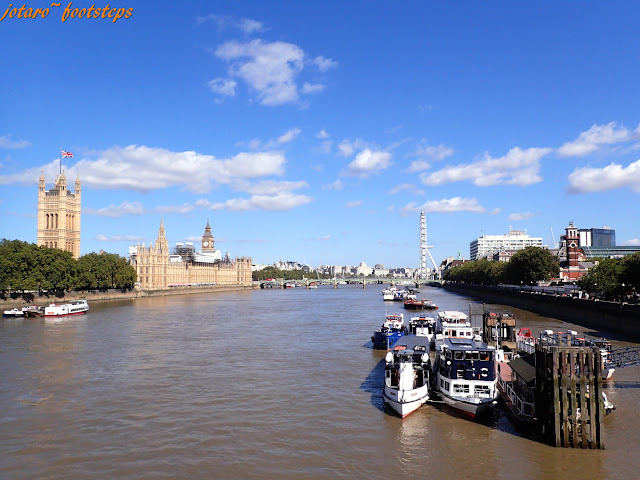 At Lambeth Bridge, the best photo of the ride. Matt had picked this spot well, from here is the Thames with the Big Ben, Parliament House and the London Eye in the background. Regular tourists would head for the Westminster Bridge for a close view of the buildings, but it's here that there is a great panoramic view. I was fortunate too, as today's weather was sunny blue skies with puffy clouds; the previous four days the sky had been the usual London moody sky weather. 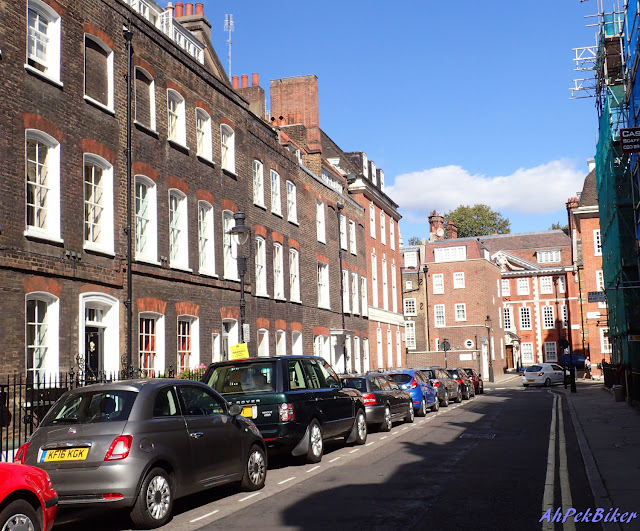 At Lord North Street, Matt suddenly came to a stop. I thought he had a puncture, until he waved me over to the Georgian terrace houses nearby .....
These houses may look ordinary, but at the front of each house were narrow steel stairs which led to the air-raid shelters used Londoners during the Luftwaffe regular bombing of London during World War Two. It must have been a frightening experience for the residents; crouching inside there with fear and worrying expectation of whether their houses, or worse still their kinsmen, would still be around when they emerged. 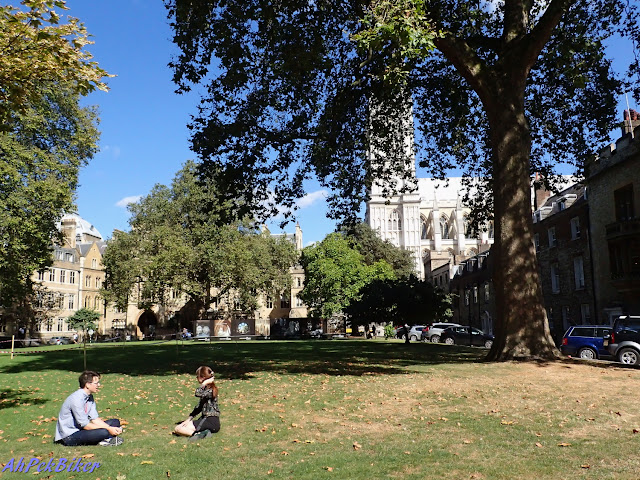 As I followed Matt onward, I noticed ahead was a dead end.

Hmmm... another surprise? It was, we went through the archway on the left and .....
Inside was a large hidden park and at the background was a side view of Westminster Abbey.  This is the Dean's Yard of the abbey and it was a fairly large yard which surprisingly most Londoners don't even know about. Here too is the Westminster School, a school more than a millennia old and still occupying the same buildings; there's even a student boarding house here. School was in and we could see smartly dressed students walking about. 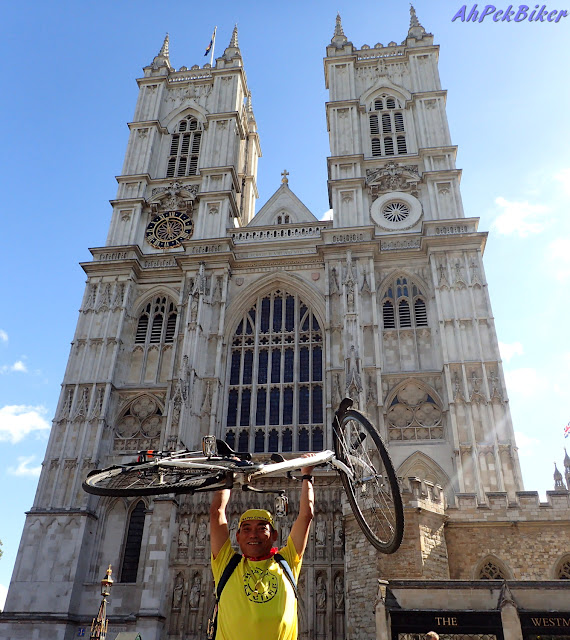 Through a large archway at the other end of the yard, we exited to the front of the abbey for a few nice shots. I had seen this archway the previous day. With a guard post there, we had thought that it was a private entry (which it was not). Thanks, Matt for showing me this secret, now I know better. 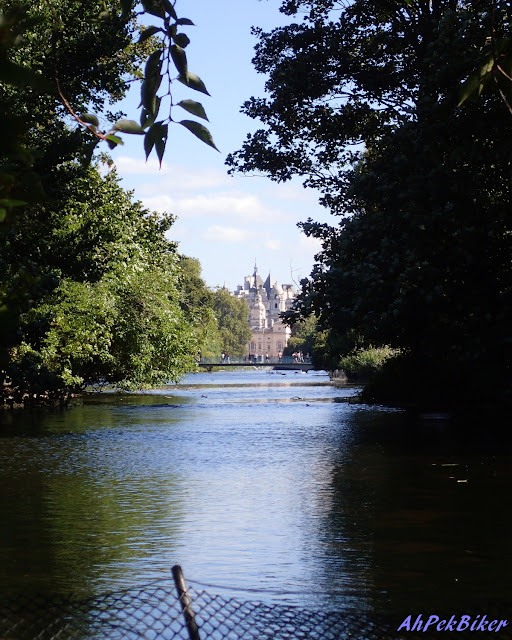 Opposite the abbey, we weaved through very quiet lanes just behind the QEII Centre. It's so quiet here that there was hardly a soul around even though it was a weekday. We crossed over Birdcage Walk edge of St. James's Park.
Here there was a sign that said no cycling, and in smaller prints "Cycling outside designated area is subject to a minimum £60 fine!" So we dismounted and pushed; but then not too far ahead, we mounted our bikes and started pedalling away on some pathways. I hoped that Matt knew what he was doing, £60 is quite an amount of money; anyway I trusted him and just followed along.
t one corner of the park, we stopped for a breather and Matt pointed out a small brass marker embedded into the ground which stated "Vista across St. James's Park Towards Whitehall". Looking up from it was this really nice vista with a view across the lake with some royally looking buildings at the other end! It's these little small things that made Mathew's tour interesting. 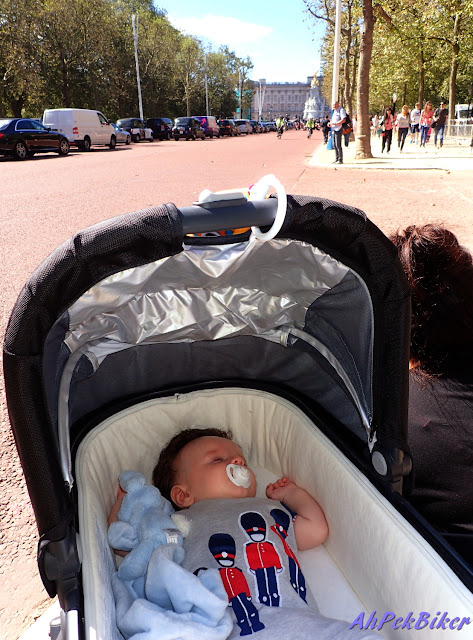 We crossed over The Mall and while Matt guarded the bikes, I walked over to Buckingham Palace. Here the crowds were thronging around the perimeter walls four persons deep, it's the time of the Changing of the Queen's Guards. Somehow I managed to get to the front but our angle was not right, the Guards were facing the other direction. Still seeing the rears of the guards is better than not seeing them at all.
Back at the bikes, I told Matt about viewing the guards' rears. "Not to worry," he quipped, "I will show you something better", and led me to a spot somewhere down The Mall (see map above for location). Here we waited together with a few others in the know; one mom even brought in a pram her sleeping tot, cutely dressed in a shirt with guards figurines, and we waited anxiously. 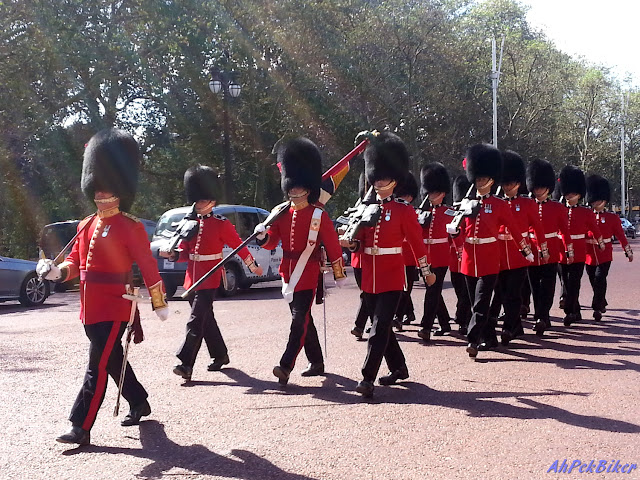 And here they come, the Queen's Guards,  marching down the street led by a marching band! "Wake up, my darling, wake up. The Guards are here!", the mother whispered to her baby. The band was followed by a few contingents of other guards, all marching smartly in the red uniforms and bear-skin hats. 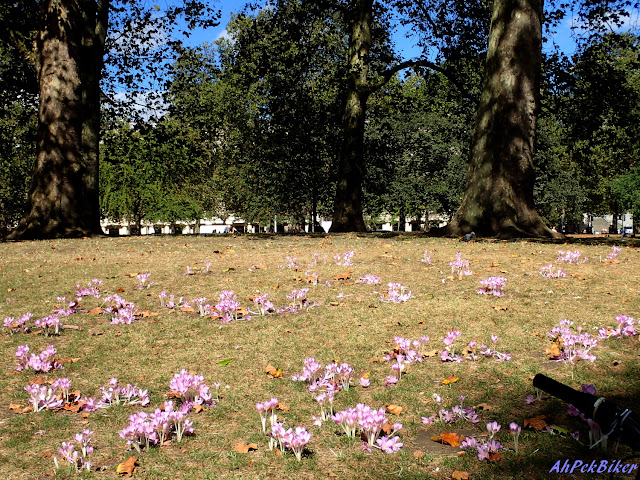 We adjourned back to the park, and at the Inn The Park cafe, we stopped for some coffee and cakes. Sitting outside, I saw some growth on the sloping lawn in front. Hmmmm... looks like weird purplish mushrooms. But on closer look, these were not mushrooms but beautiful blooms! 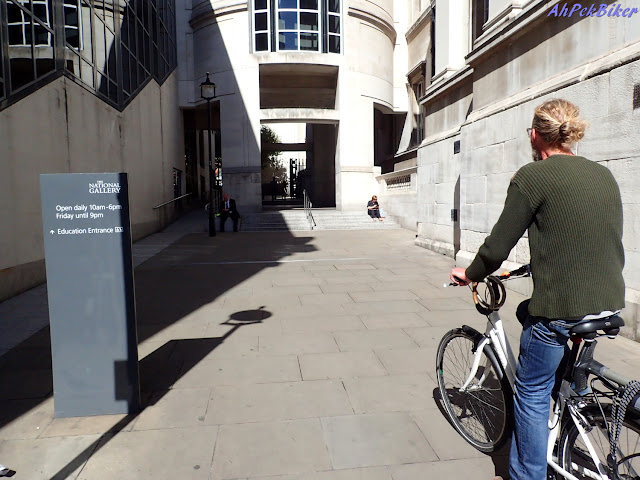 After a quick stop at Trafalgar Square, another surprise! We went through a lane running under the National Gallery. 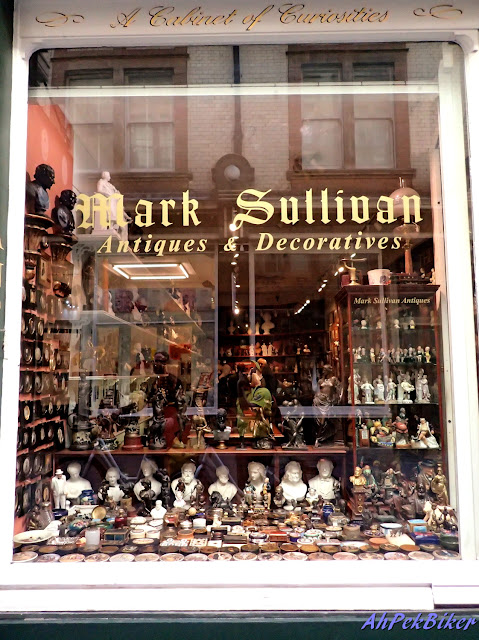 Next destination, Cecil Court which I liked very much as it was lined with old book shops and antique stores. Above was on of the antique shops window. 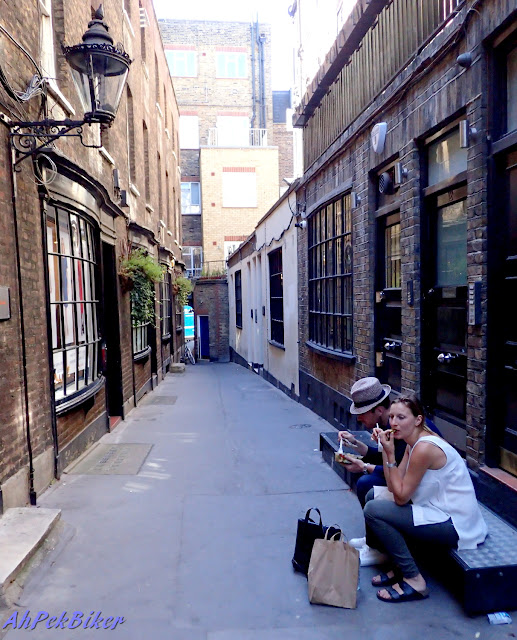 Just a bit further was Goodwins Court, which was the inspiration for  Harry Potter's famed Dragon Alley. At this time it was very quite, with just a couple there sitting lovingly to complete the picture. 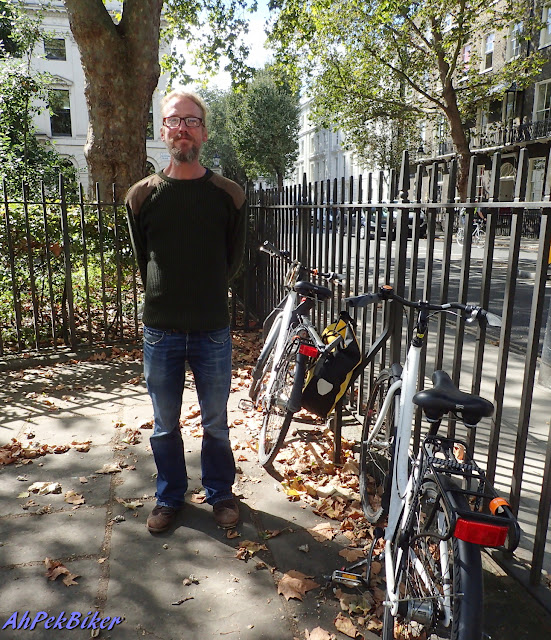 We made a short loop at Covent Garden before ending the ride at Bloomsbury Square Gardens, where a very pleased looking Matt posed for me.
Many thanks mate, I will come looking for you again when I am back in London next. 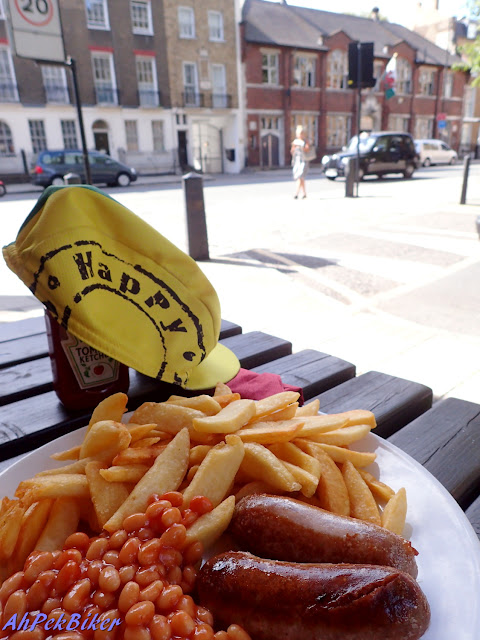 A short walk away, I had lunch of sausage and fries a the Calthrope Arms, a nice little pub. Even at this time there were a few friendly locals around to banter with.
After fived days of hecticness, we took the afternoon easy; tomorrow we head for France!

TATA!
(For more photos of the day Click Here)