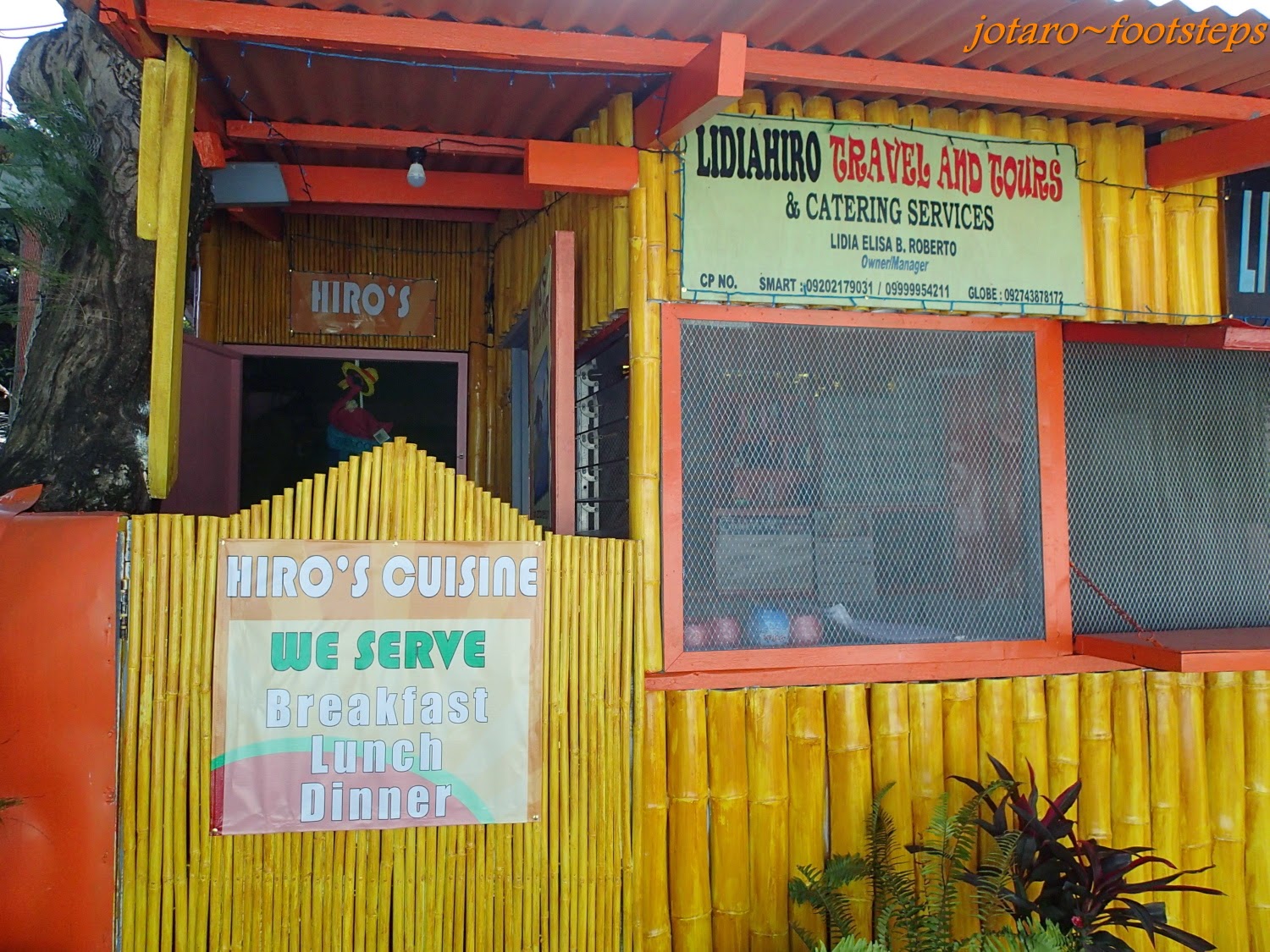 We were in Batanes for some cycling adventure (... see cycling blog), for the past few days we had tried some Ivatan food (like at Pensioner Ivatan, etc.), they were good but nothing that made a strong impression.... so we went a hunting for good Ivatan food and chanced upon Hiro's... after that we could not just get enough of their authentic food. In fact we went to Hiro's to eat for three days continuously until the day before we left Batanes.
To top the good food, Lydia who runs Hiro's is a warm, jovial woman; easy to speak to, laugh infectiously and is very entertaining.

Let's have a look at Hiro's lovely Ivatan cuisine: 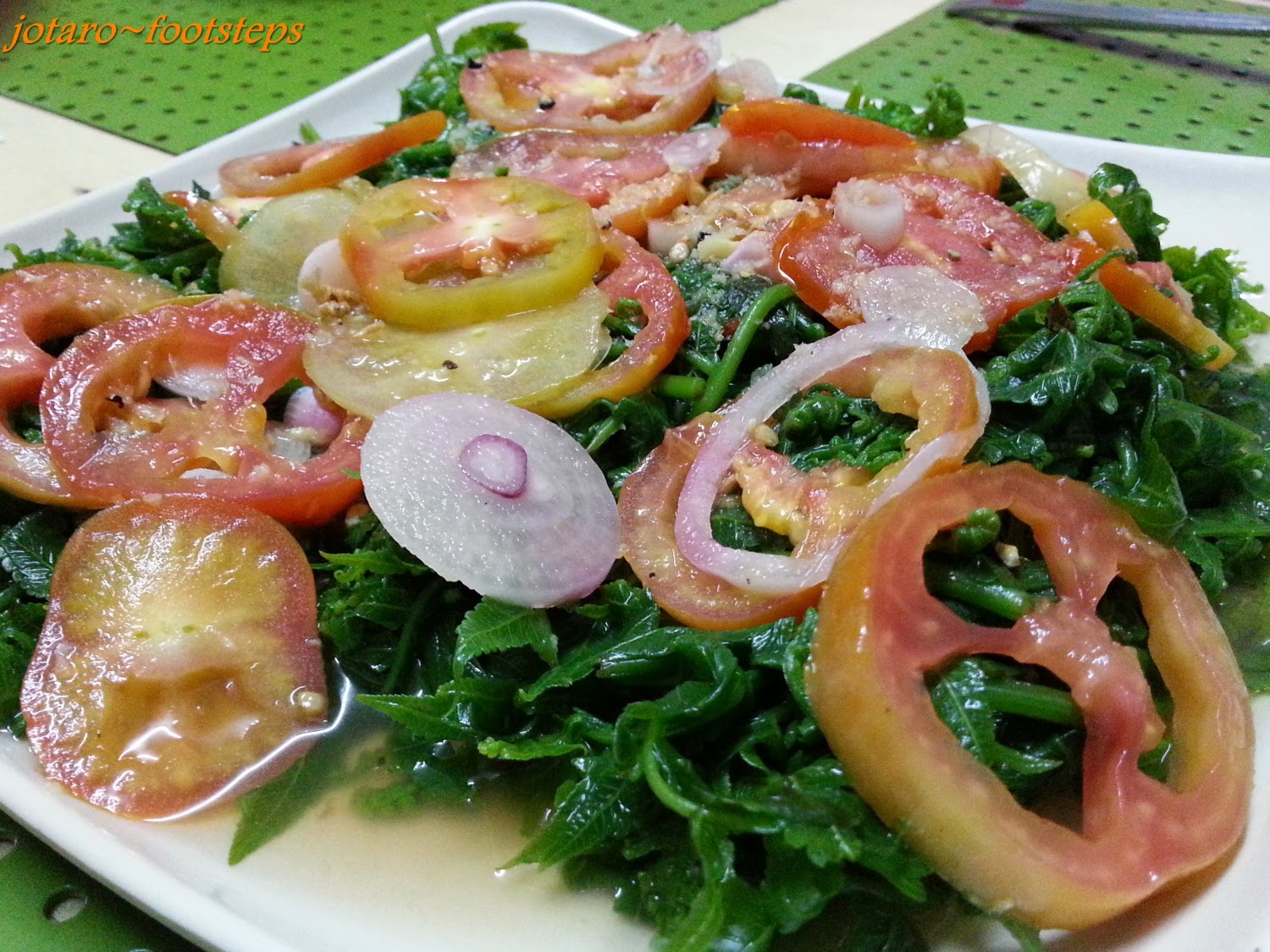 Pako (Fiddlehead fern) salad.
The Pako fern were pre-boiled until soft yet still slightly crunchy; slices of tomatoes, large onions and a little bit of chopped raw garlic added. The salad is dressed with sugar-cane vinegar.
The tomatoes were very fresh and sweet; and the sugar-cane vinegar with its sweet-sourness brought out the freshness of the vegetables. 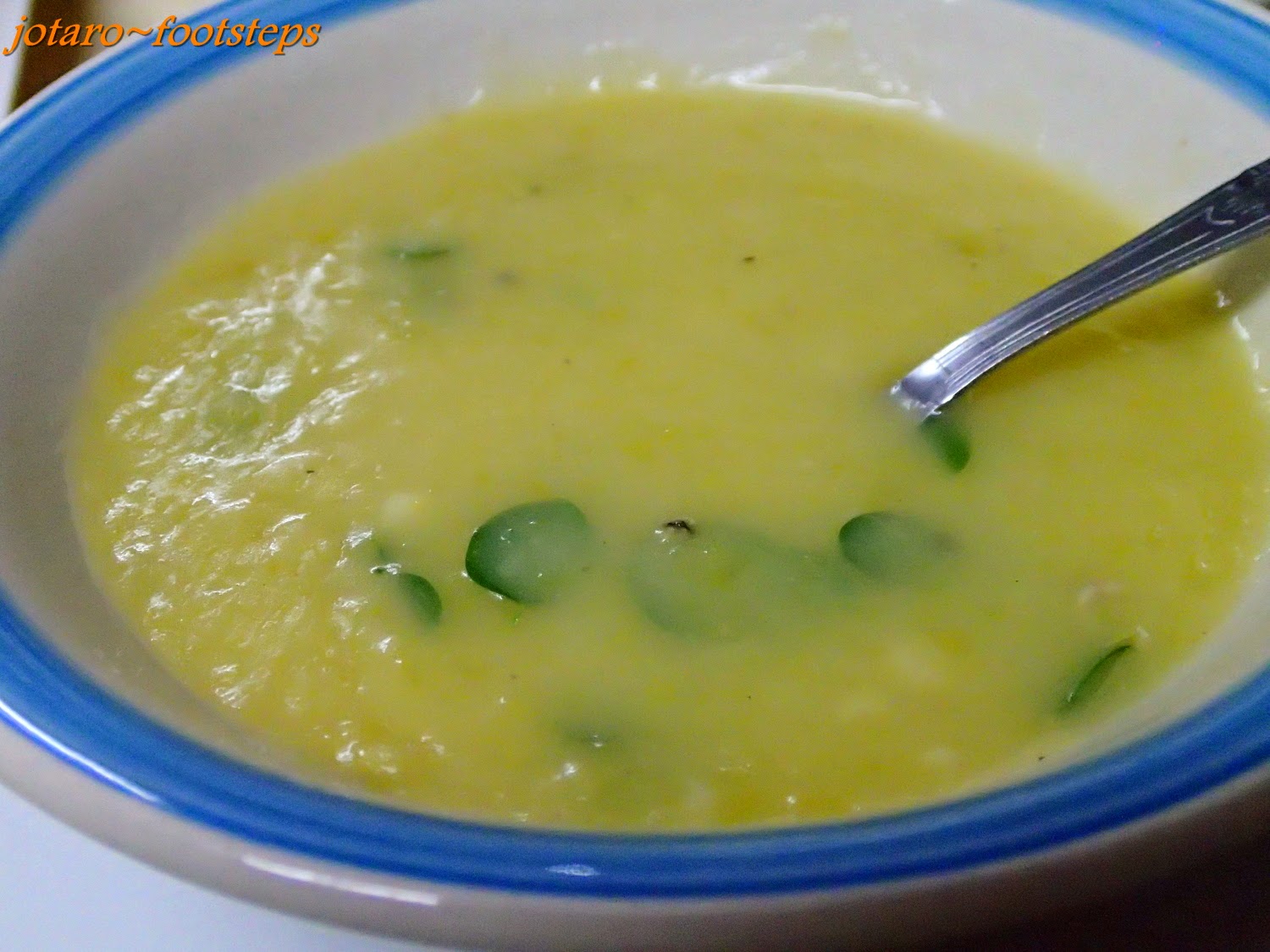 Pumpkin Soup with Malungay
This would have been like any other pumpkin soup, the kicker were the Malungay (Moringa) leaves added to the soup. The leaves just added a tinge of their flavour to the soup; but the health benefits from them comes in the vitamins that they packed. So I can say this is a healthy food. 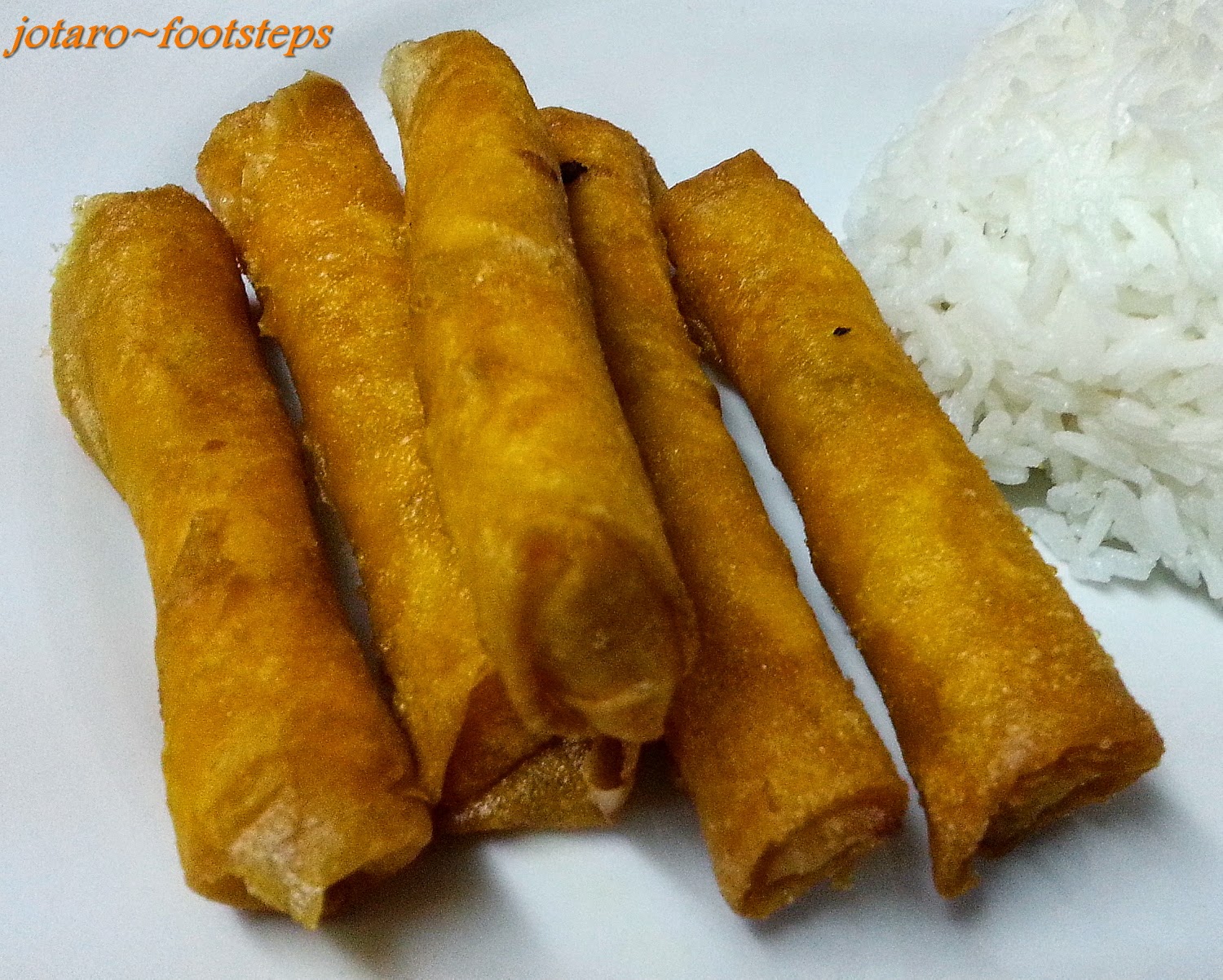 Fish Lumpia
One will be forgiven if one mistakes these for spring rolls. In fact Lumpia are like spring rolls, being Dorado fish wrapped in pastry skin and then deep fried. 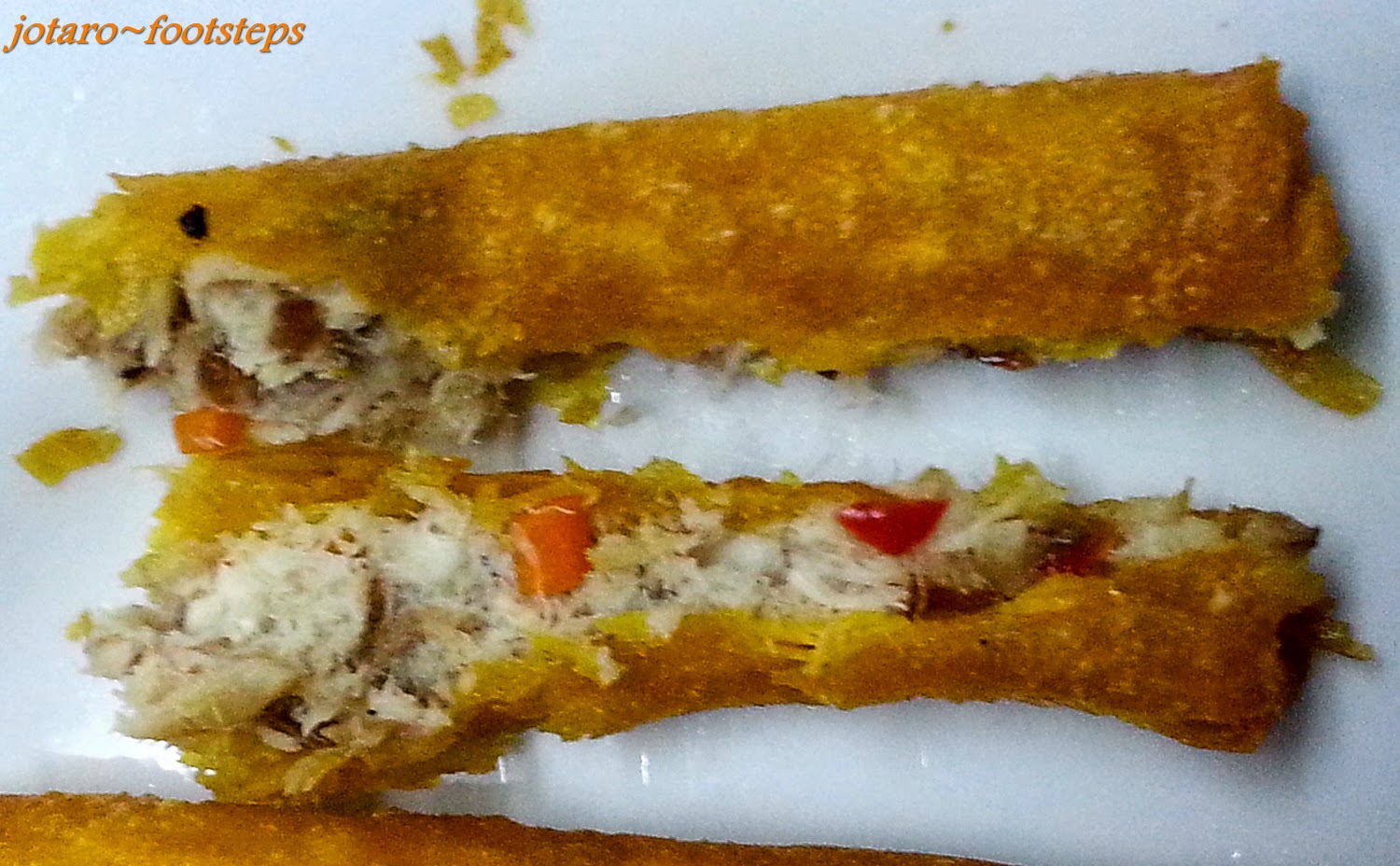 Inside the rolls were mince Dorado fish meat with some carrot, cabbage and chilli bits. The deep frying has resulted in a nice crunchy skin with a soft, slightly moist and tasty filling. 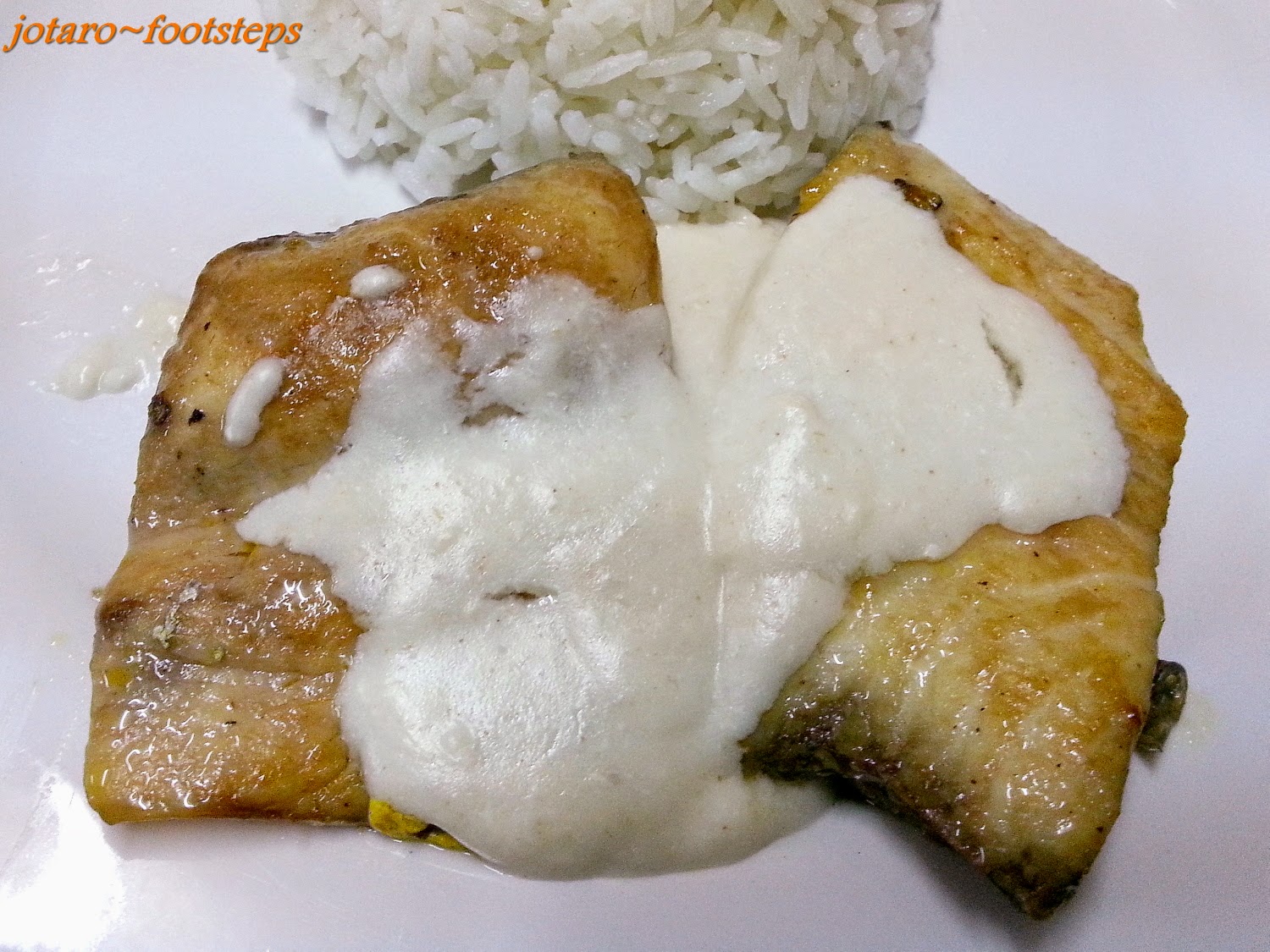 Dorado Fish With Coconut Cream.
This is a nice combo; one of lightly fried Dorado fish with lightly simmered coconut cream (santan). The light deep frying of the fish gave it a think crispy layer while maintaining a tender fleshy inside. The coconut cream was lightly simmered with some corn flour to give it a thicker consistency, some salt was added to bring out the creaminess.
A good balance of the taste of the sea with the pureness of the trees. 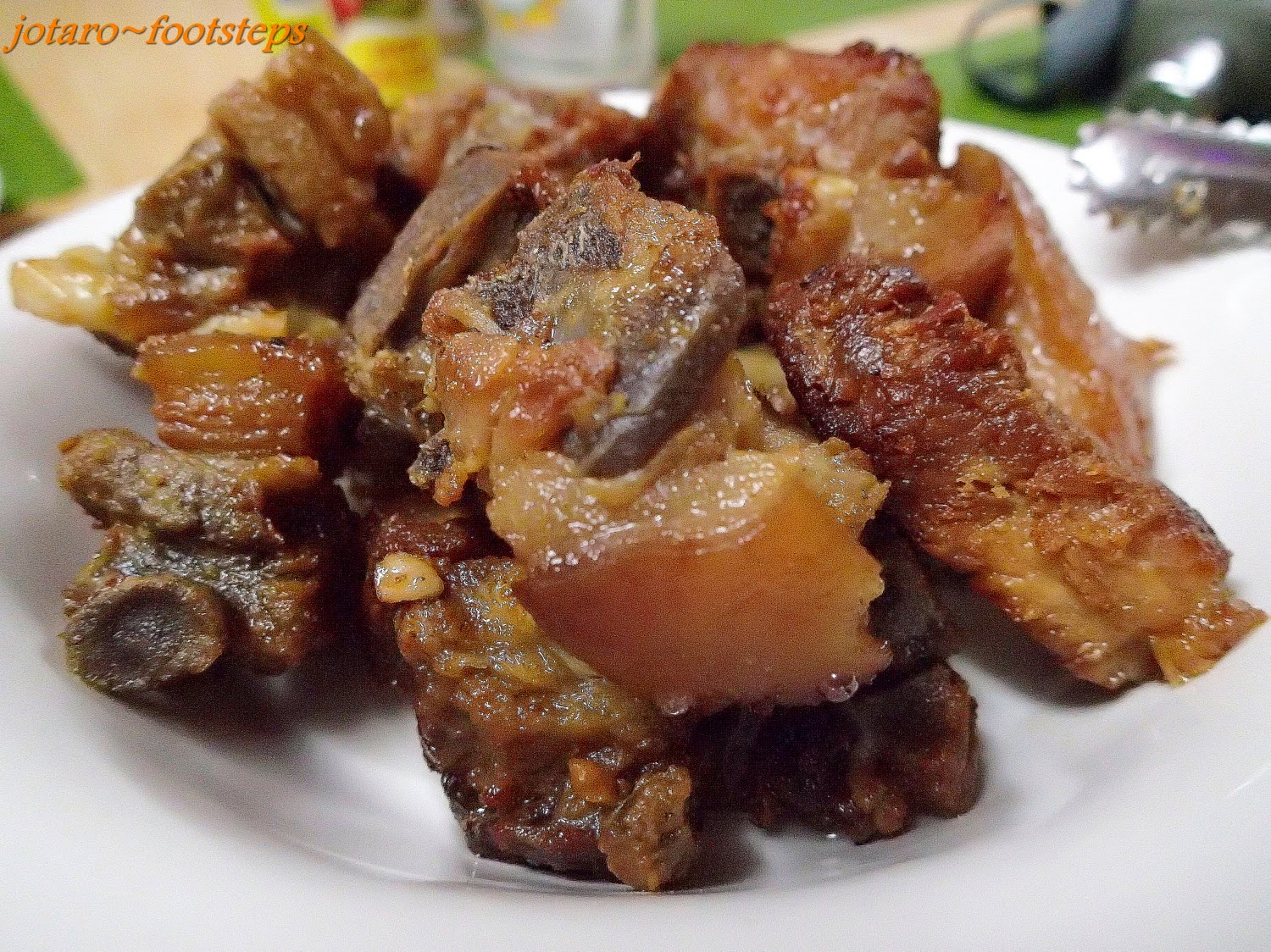 Dry Adobo (Lunez)
Adobo is considered to be the unofficial national dish of the Philippines. It is chicken or pork marinated in a seasoning of vinegar, soy sauce and garlic. The meat is browned in oil and then simmered in the marinate.
Hiro's version is a dry version, one without the gravy and cooked with pork trotters. This gives a dry look but one where the meat is still tender, something good to slowly bite and munch. Delicious, especially if it goes with beer. 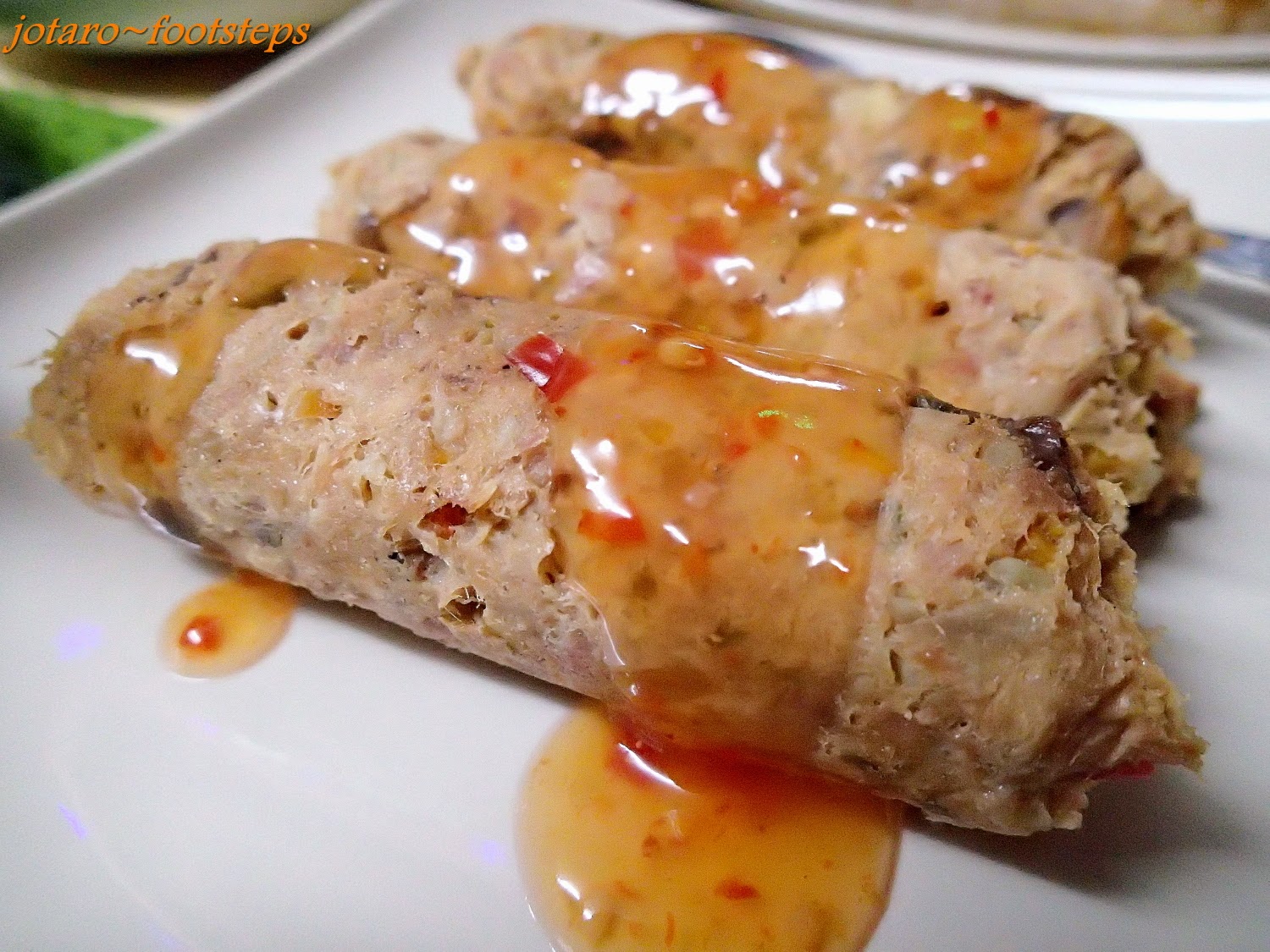 Fish Embutido
Embutido is a meat roll. Hiro's one is an interesting dish of fish meat in a roll. Dorado fish meat is minced together with small cutss of chillis, pineapples, garlic and made into a roll. Served with a sauce that is slightly sweet, sour and spicy. 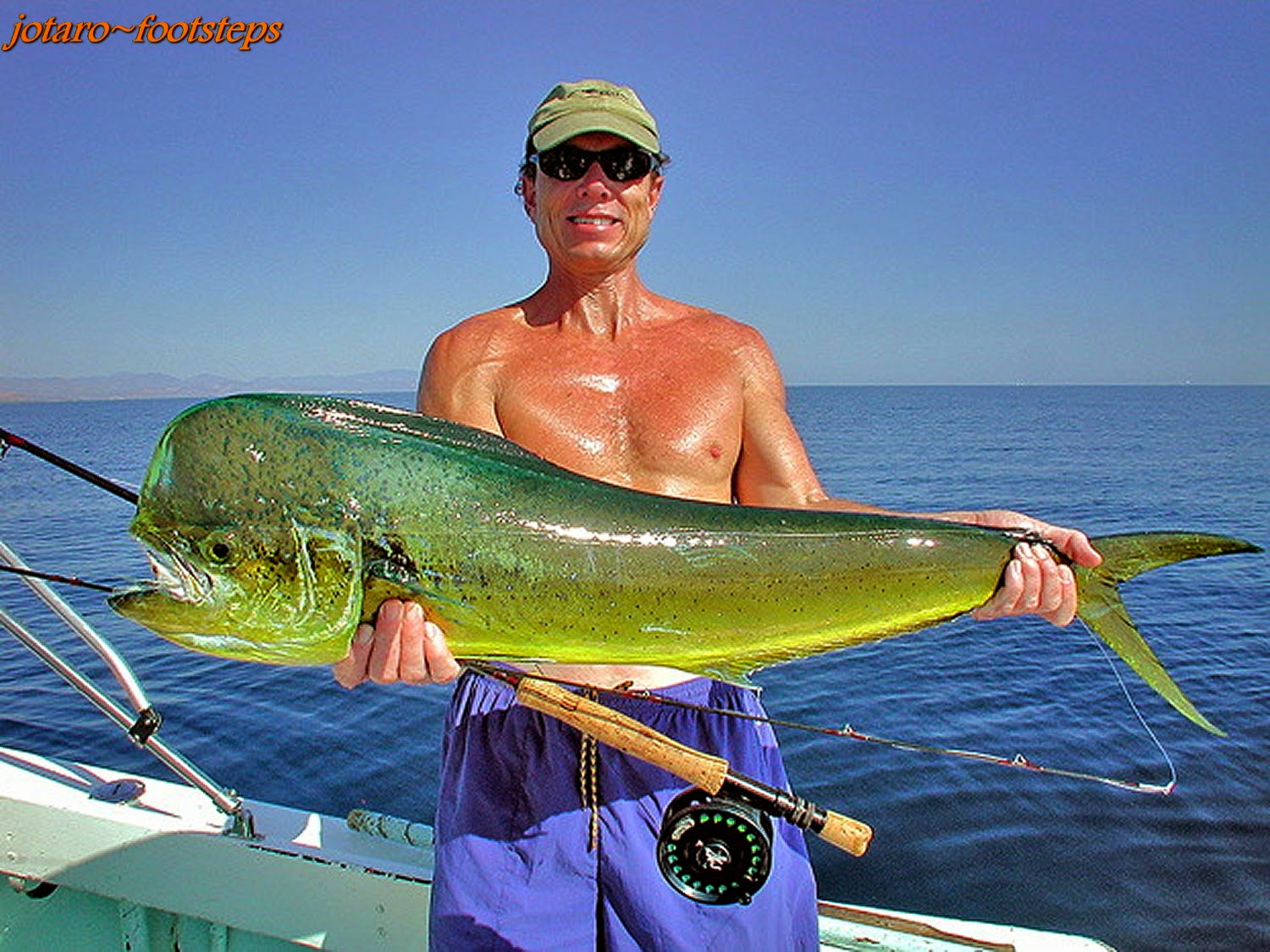 You all must be wondering what a Dorado fish looks like. The above shows it, it is a fish with a golden sheen, hence the name Dorado.
In the Philippines, it is the pickled and seasoned Dorado that is treasured delicacy. The fish is pickled in vinegar and salt and left to dry for four months after which it is smoked overnight. A kilo of the seasoned fish could cost up to 1000 PHP. 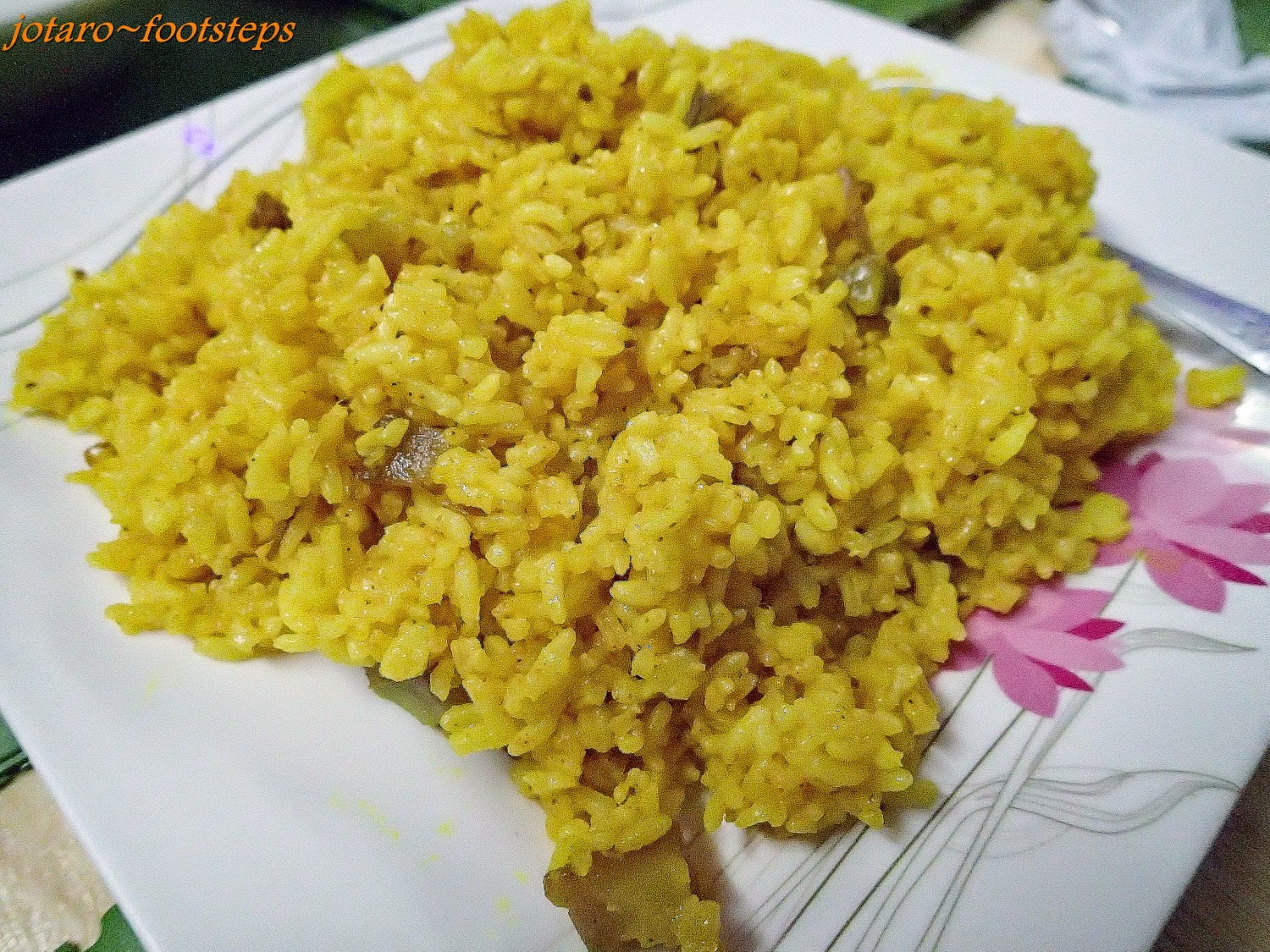 Yellow Tumeric Rice with Pork Slices
An alternative to white rice, one that's with a good tumeric aroma. The pork slices lends a bit of flavour to the rice. 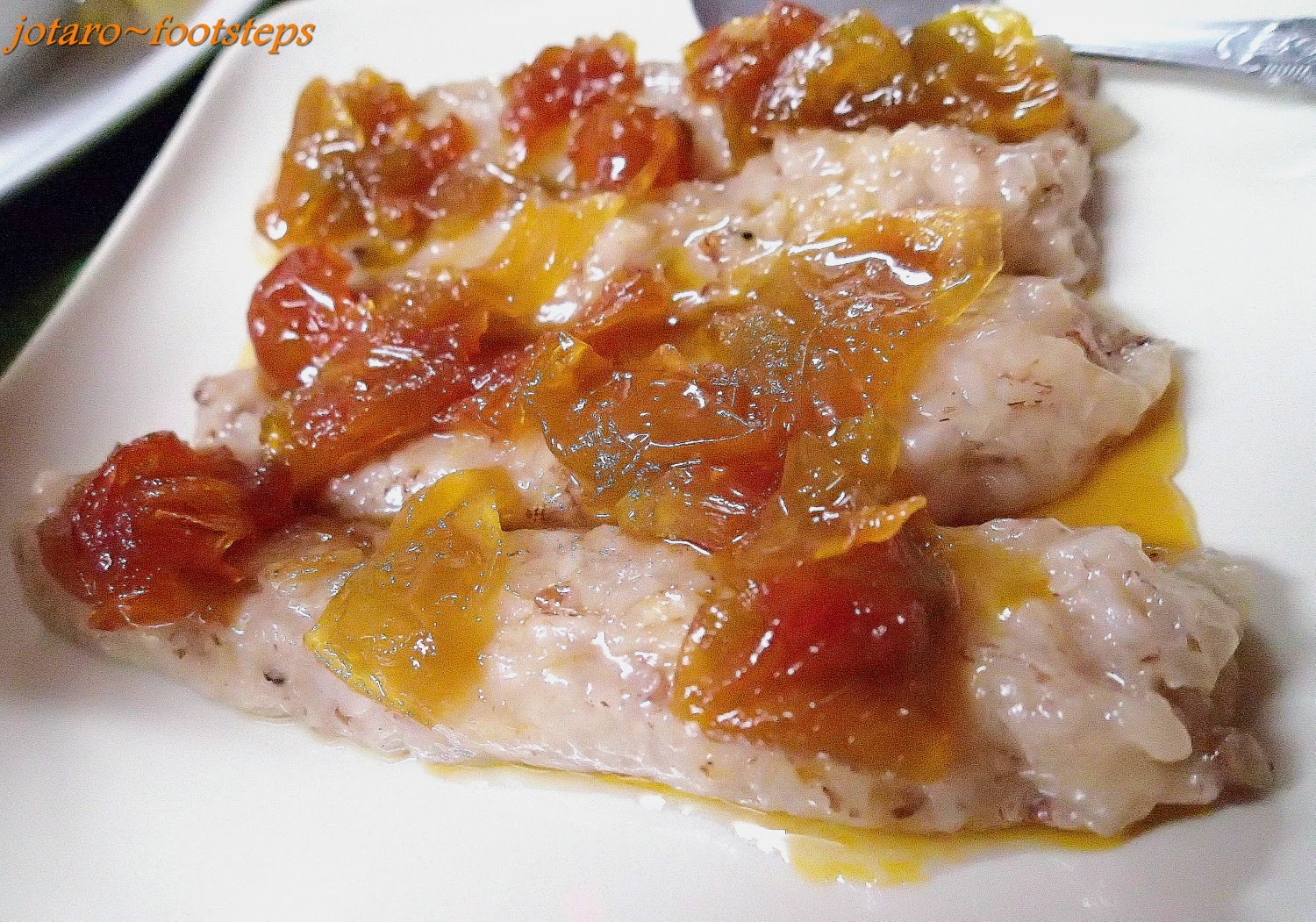 Suman (rice) with Tomato Jelly
Suman is a way of cooking staples wrapped in palm leaves. This one uses sticky glutinous rice. The slightly sweet tomato jelly went very well with the stickiness of the rice. 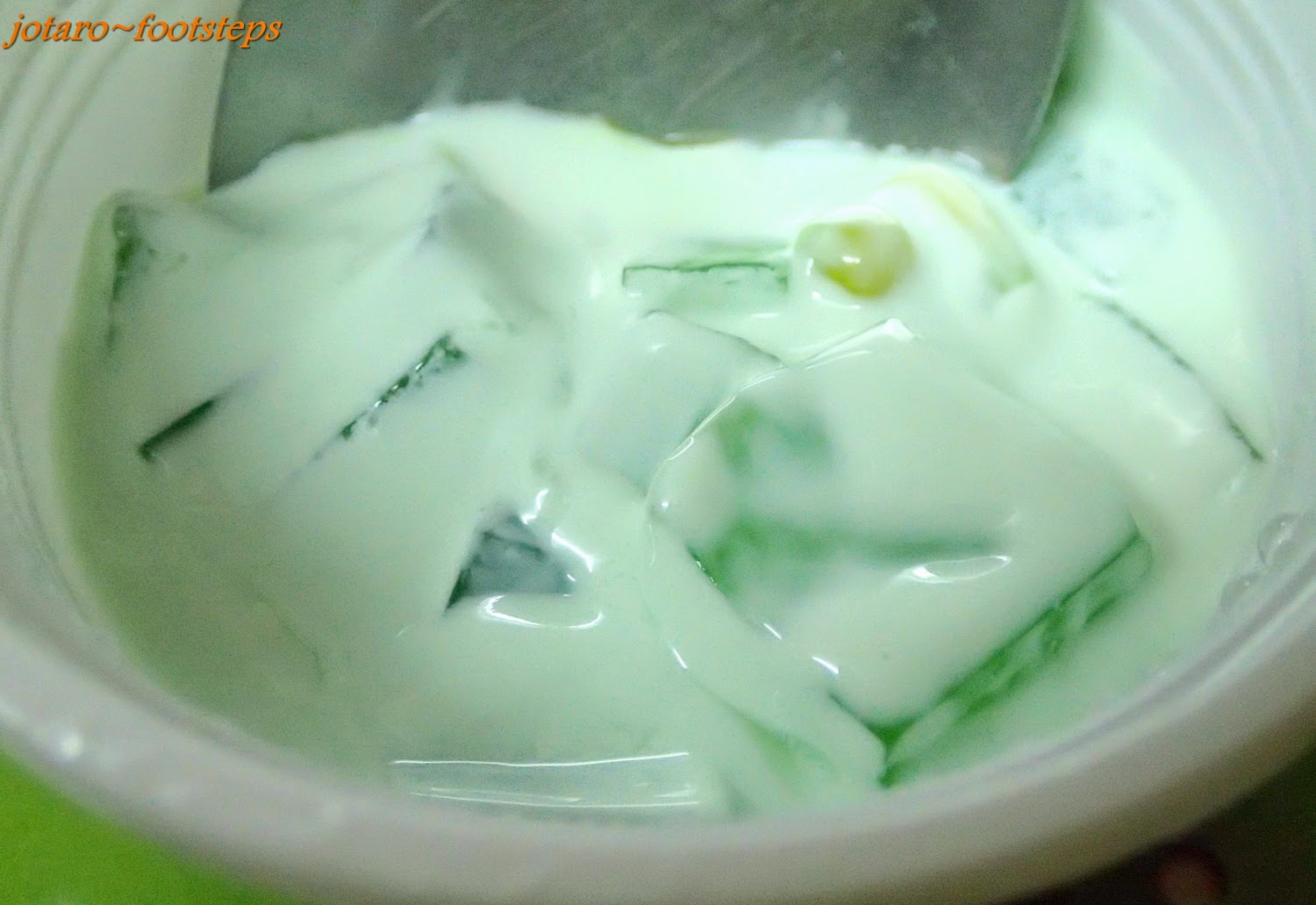 Buko Pandan
Buko is gelatinous young coconut, and Hiro's has done a wonderful job of making it into a bouncy yet stiff jelly. Green cubes of this were served in thick coconut cream.
This is one dessert that should not be missed! 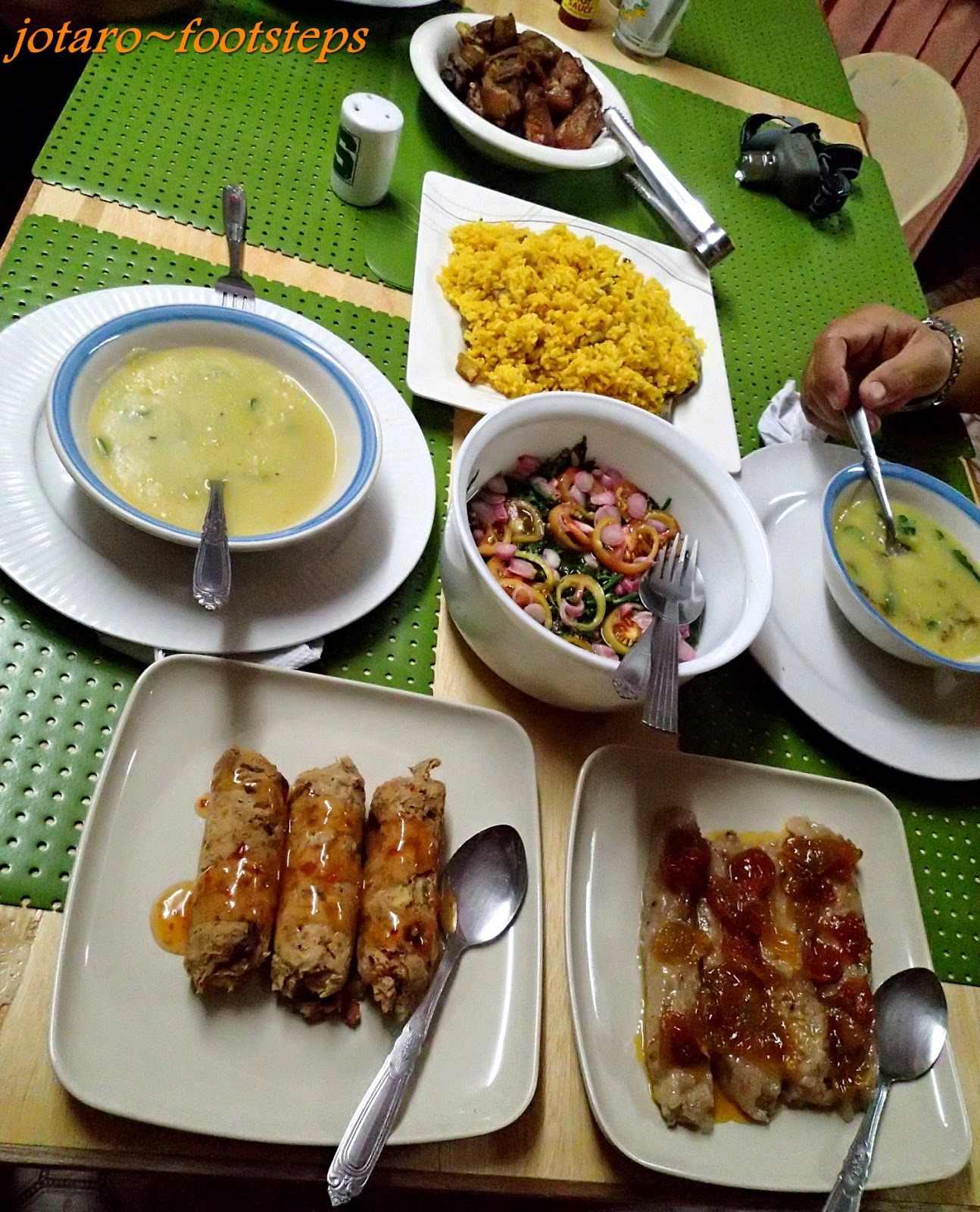 Our sumptuous spread for our second dinner at Hiro's, just can't get enough of it; a very natural meal, one of vegetables from the garden and fish from the sea.
We also had coconut crabs during the first day; that's another story, one of a rare delicacy that deserves to be told in another blog (... see Coconut Crabs @ Hiro's blog).

Our third dinner at Hiro's was with some new Filipino friends from the Brompton Club of the Philippines, we had some of the above & also the following: 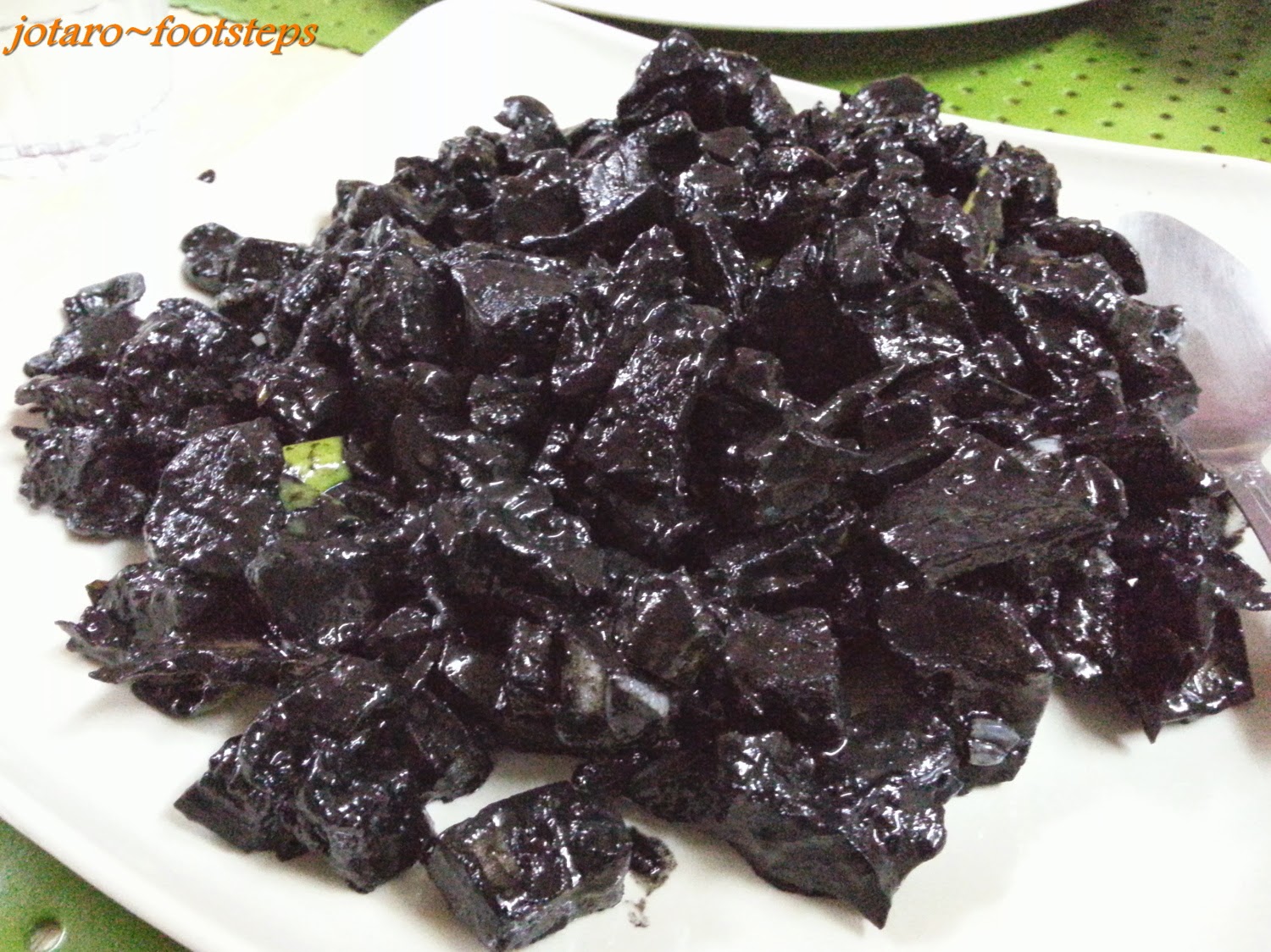 Cuttlefish Stick
Okay, this is one dish that looks yucky. At first look I did not realize that it was cuttlefish, but being cautious (i.e. having being tricked into eating rubbery boiled tarantulas in Cambodia) I asked what it was first.
It's cuttlefish! But one that has been cooked together with the black, brackish ink...
Ok, might as well be adventurous and try a bite; actually it looks worse than it tastes - it was munchy, the coating of black ink was a bit powdery and taste-wise it was okay. But I could not get through the psychological yucky barrier and only took two pieces. Pork Adobo
This is the regular Adobo, with pork knuckles marinated in vinegar, soy sauce and garlic. It is then cooked to a stew with the marinate. This one was more tender than the dry version. and the stew was very tasty. 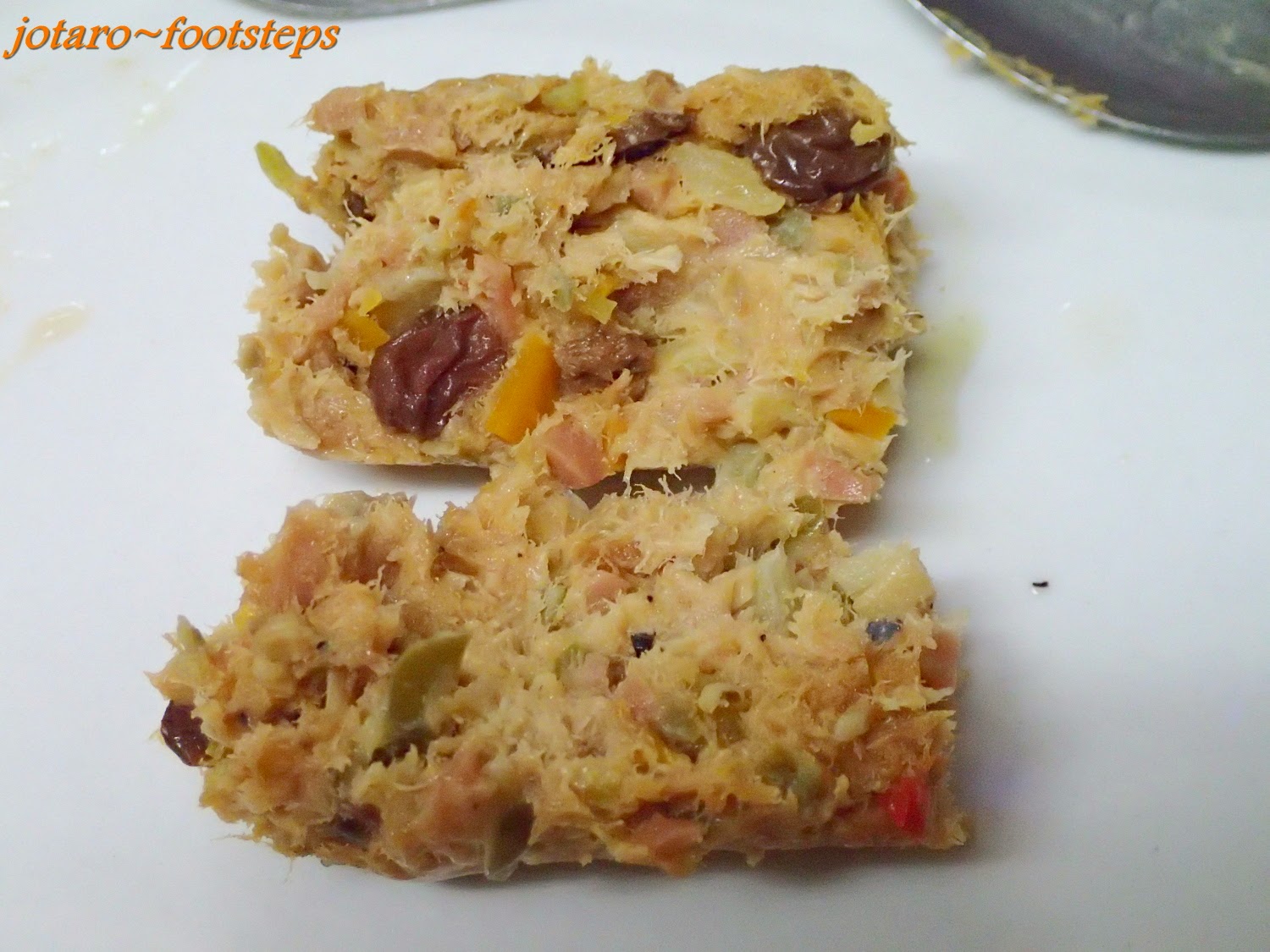 This looks like a Fish Embutido but one that is not rolled so densely. It also had more vegetables infill, I liked those little dark red tomatoes that had been cooked to a squash. 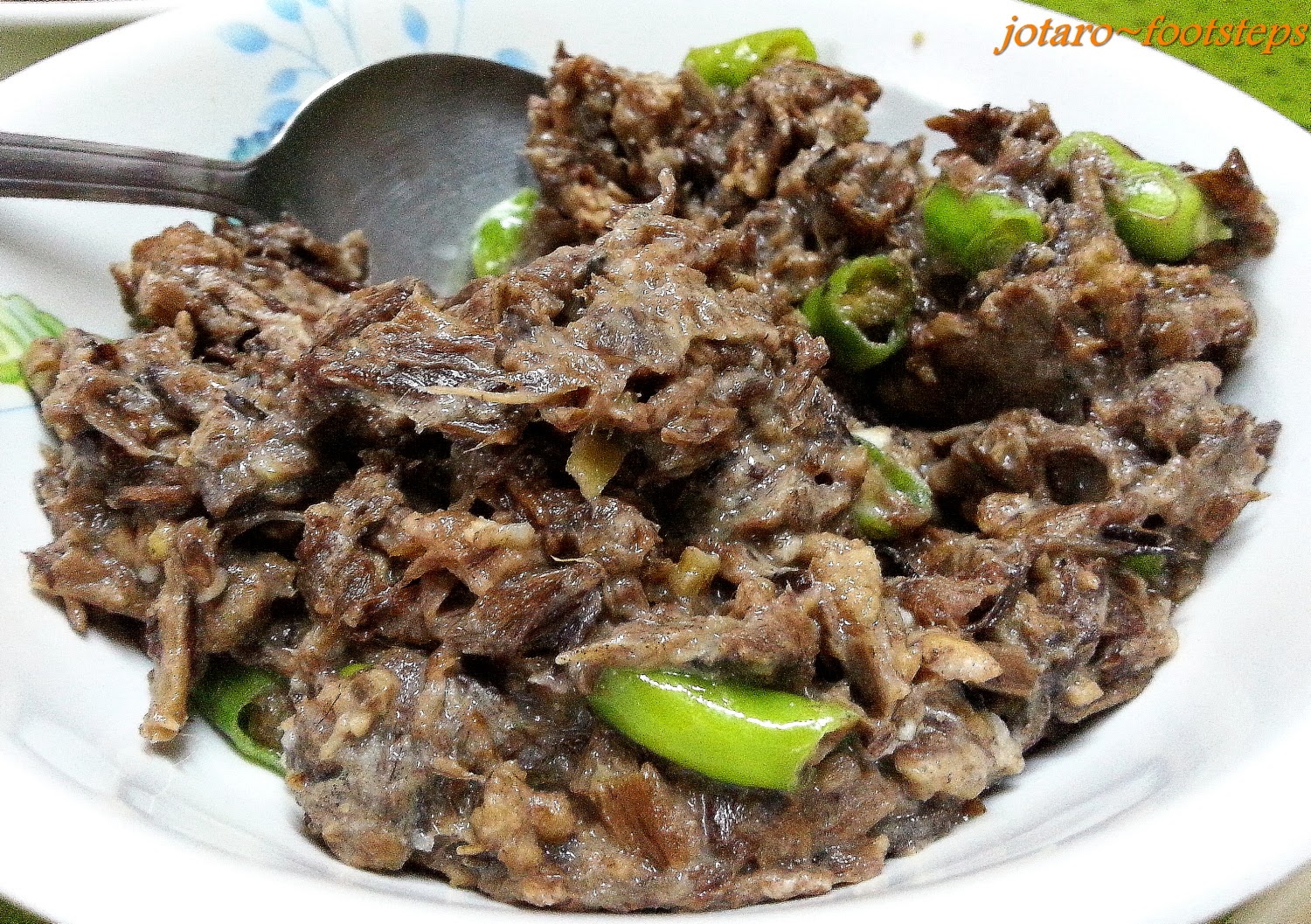 Beef Steak.
This is the whole piece steak but one that has been cut into smaller pieces with shredded edges and then cooked with cuts of green chillies. A savour dish with the beef tender and the chilli just giving a hint of spiciness. 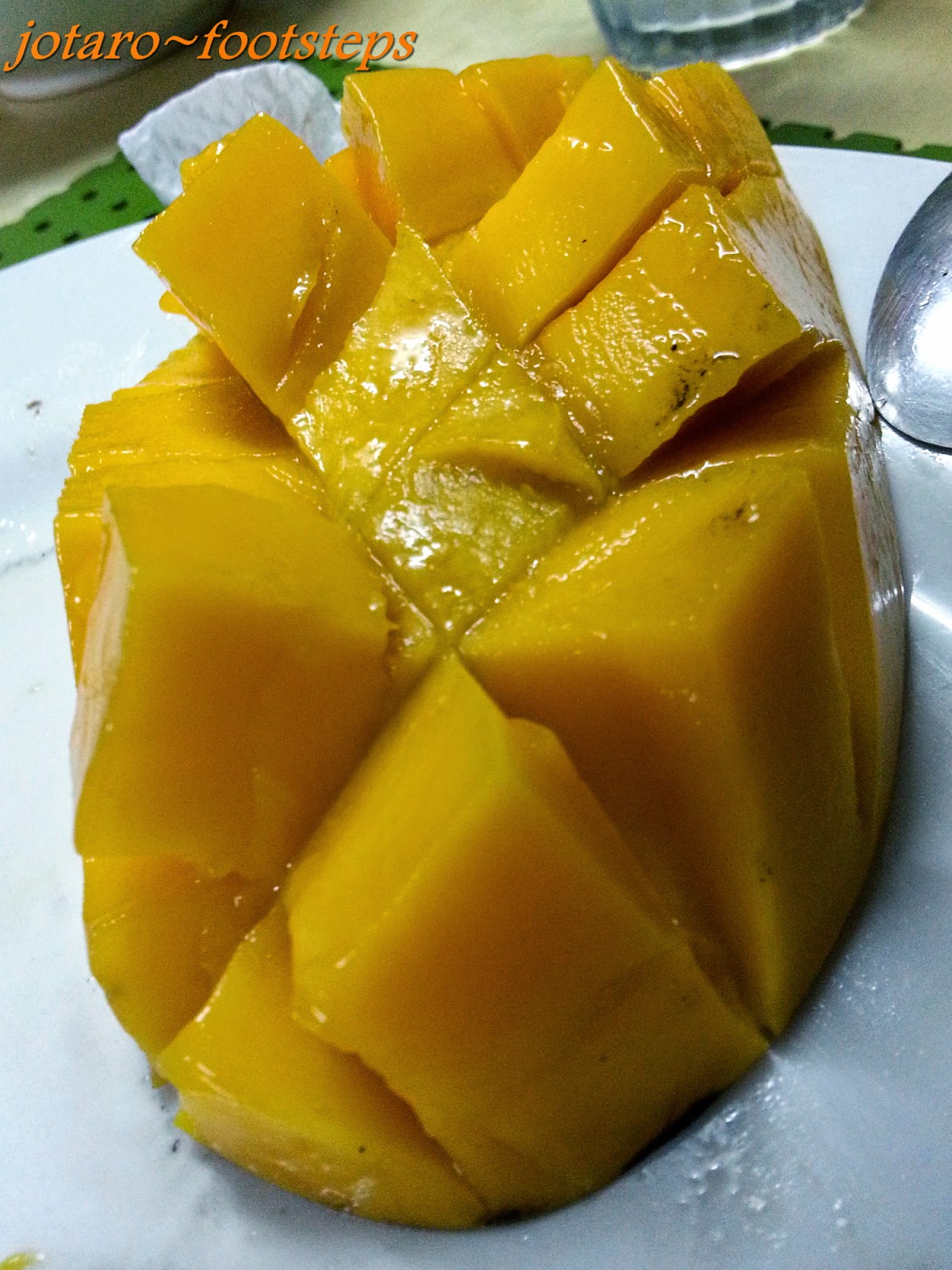 A good end to the meal - a nice cut of Philippines mango.
Well... that's a lot of food, but these were the delicacies we had over three days. We are not greedy pigs, yah? The food was just simply delicious!

Lydia of Hiro's has done an amazing job of bringing Ivatan cuisine to greater heights, her food is simple yet spectacular, one cooked with a good dose of her cheerfulness.
I would recommend that when in Batanes not to miss Hiro's; we liked it very much, and came again and again. 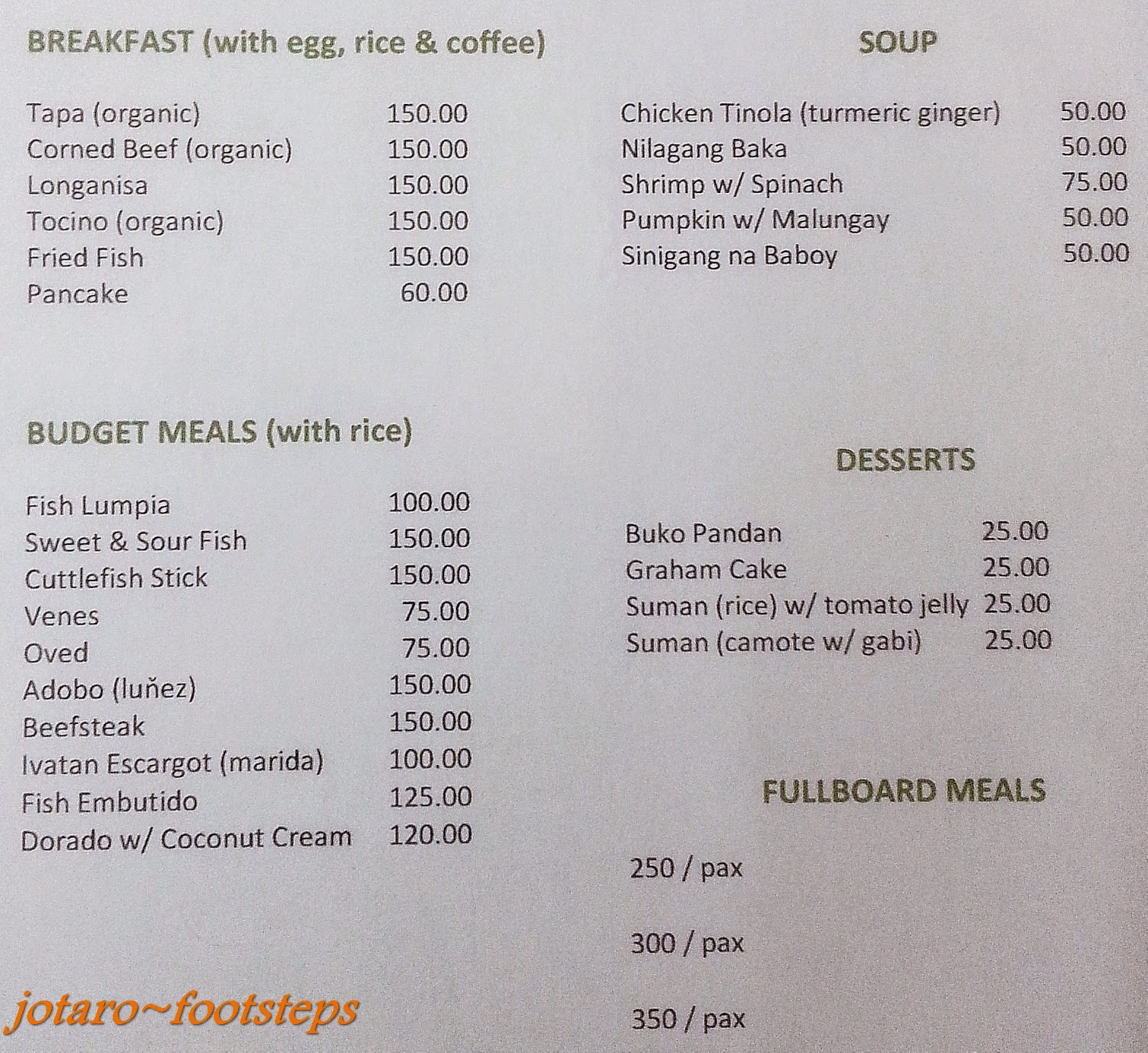 Hiro's Menu & Price List (at time of this blog), prices are in Philippines Pesos.
The first Fullboard Meal at 250PHP/pax includes a soup, vegetables and two of the main dishes from the Budget Meals section. The 300PHP meal is the same as the first plus an additional main dish. The 350PHP meal is the same as the second with one of the main dishes replaced by a Coconut Crab (Yes! A coconut crab); this meal is for a minimum order of four persons. All meals comes with white rice.

One last note of advise; if ordering the "Oved" make sure you pronounce it as "Or-Vayed" and not "Or-Wet. I said it the later way and had Lydia bursting into uncontrollable laughter that she had to run to her kitchen to calm down. See, it a crude term for the female genitalia.

You are at - Jotaro's Blog  / FootSteps / YummY! / Philippines 2015 Batanes - Filipino Food / Batanes Ivatan Cuisine @ Hiro's
If you like this, view my other blogs at Jotaro's Blog
(comments most welcomed below. if you like this pls share via Facebook or Twitter)
Posted by Jotaro Zen at 2:52 PM